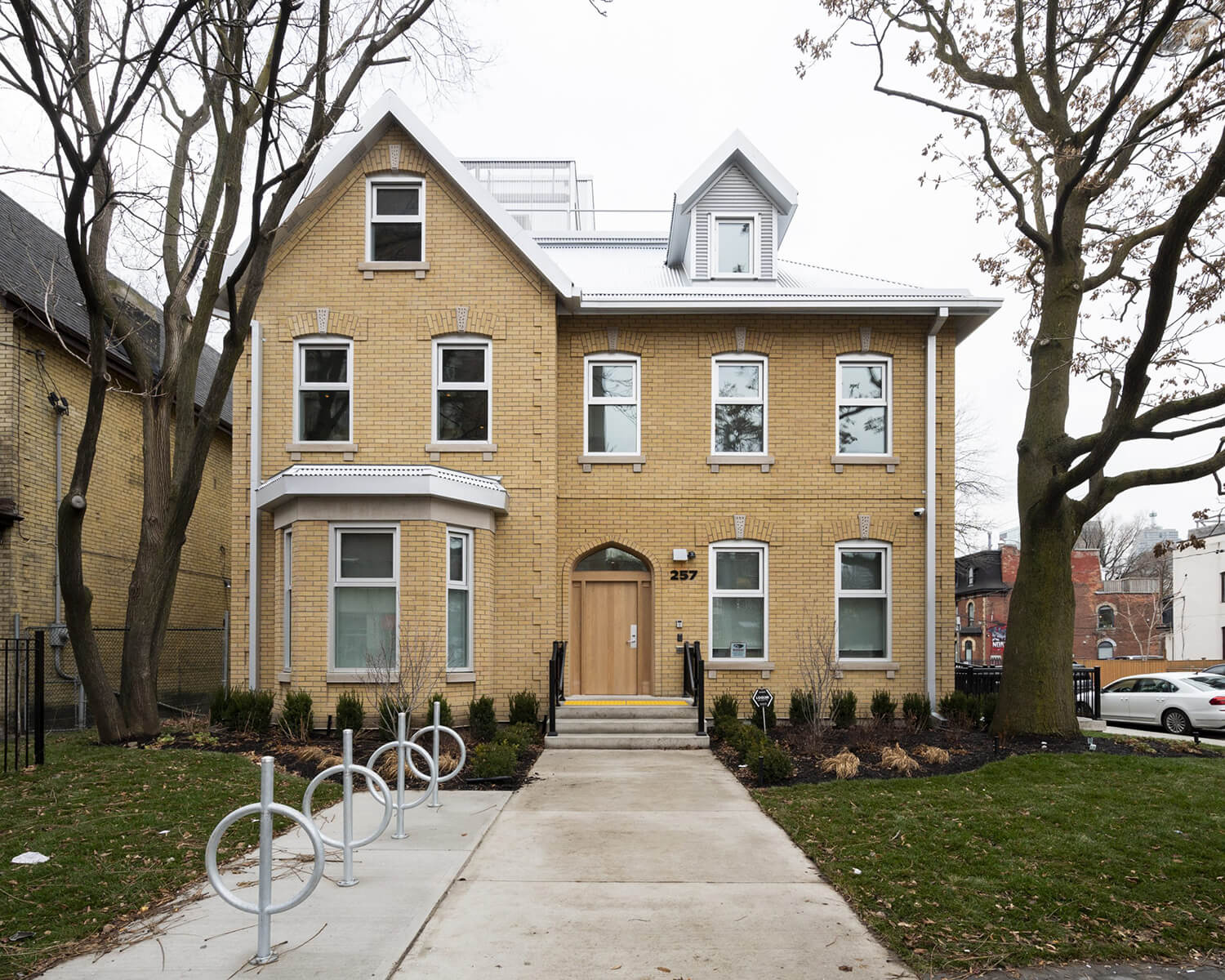 The complex for LGBTQI2S youth rewrites the rules for transitional housing

Tucked into the corner of Pembroke Street in Toronto’s East End, a low-slung housing complex makes for an intriguing sight. The brick facade of its restored Victorian half fits in with the Garden District’s traditional bay-and-gables, and you might even miss it – until, that is, the rainbow cladding adorning the adjoined ’70s-era building behind it reveals itself. Get closer, and you’ll see a widened staircase and accessibility ramp peeking out from its flank, too. For 33 LGBTQI2S youth and young adults, it’s home.

The Friends of Ruby Home, which was opened at the end of 2020 following five years of construction, is a response to a 2012 report by Egale Canada, an LGBTQI2S advocacy organization. The report found that 23 per cent of homeless youth in Toronto identify as LGBTQ, with almost every respondent saying existing shelters felt unsafe or unresponsive to their needs. Several of the respondents also reported being assaulted, citing their sexual orientation as the reason for being attacked, while others felt compelled to hide their gender identity when accessing these services, or simply avoided them altogether. The report concluded that homeless LGBTQ youth, vastly overrepresented on Toronto’s streets, needed safe, purpose-built transitional housing. “Most critically,” the report states, “LGBTQ youth need to feel that their lives have meaning and that their futures are full of potential.”

After publishing its findings, Egale convened a group of youth, architects and designers to conceive a new transitional housing concept that would feel more like a real home than an institution, that would reduce the effects of trauma through supportive planning and good design. “This is a first-of-its-kind model in terms of how mental health is married into all the design aspects” remarks Donna Wawzonek, Friends of Ruby’s development and grants officer. Already groundbreaking in scope, the team, which included the Daniels Corporation and architects at Sustainable TO would, for good measure, eventually add a design-world heavyweight, too: Yabu Pushelberg.

Better known for their work with luxury brands like Four Seasons, One Madison Park and Lasvit, George Yabu and Glenn Pushelberg became involved with Friends of Ruby after a realization in 2013 when they received the Order of Canada. “We were in Ottawa and we looked at each other and thought: ‘What the fuck are we doing here? All we do is pick drapes for a living,’” says Pushelberg, laughing. The pair wanted to do more, so they started looking for the right project. “We wanted to renovate schools, but the school boards put the kibosh on that. We were about to re-do the City Hall wedding chapel, but the mayor got voted out. Not to be discouraged, we connected with Egale, and they pitched the home to us.”

It was a perfect match. Friends of Ruby was looking for an innovative approach to housing, while Yabu and Pushelberg were seeking a good cause to pour their hearts and talent into. The idea that good design is crucial to supportive housing is one that the designers take to heart. “Materials and interiors can emotionally prop up people,” says Pushelberg. “Our most successful work comes when the combination of elements like scale, proportion, colour, material work in harmony to create emotional resonance.” Integrating design principles that improve mental health was a significant goal of the project. “To have not only a warm bed and food, but to have a place that has some grace to it – that goes a long way to healing.”

The three-level building now contains 31 suites, with both single and couples rooms, and five rooms reserved for emergencies. “We took some of the principles we had learned in designing micro-hotels and applied them to make the personal spaces warm and functional,” says Pushelberg. As a result, each room is equipped with an individually controlled HVAC system, a mini-fridge and a private washroom.

The communal kitchen – which hasn’t been put to use yet due to COVID-19 restrictions – was designed to be as home-y as possible, with home appliances being used instead of commercial equipment to ensure that residents would feel comfortable using them. A games room and lounge are furnished with donations from Yabu Pushelberg suppliers, while a patio with a bright yellow canopy umbrella and integrated seating will soon be transformed into a rooftop garden where residents can grow vegetables and herbs. Following suggestions from a youth focus group, even pets are allowed (hence, the basement grooming table and dog-washing station). Yabu and Pushelberg are also working on collecting art for the space, some of which they’ve commissioned from LGBTQI2S artists. Above all, the pair wanted to skirt around the bare-minimum impression that often pervades supportive housing spaces: “We believe that if you give somebody something that looks and feels good, they will respect it.”

The complex’s transitional rooms are currently all occupied – its residents will stay for 12-24 months while they access Friends of Ruby’s housing support, skills training and mental health support. The ultimate goal of the transitional home was always to foster independence – but Friends of Ruby didn’t stop there. “We found out a couple weeks ago that the youth are organizing a pride prom. We’re really excited to see the community they have created.”

This idea of collective work resonates for Pushelberg: “It’s one thing to raise money, but it’s another to apply our skills and to bring our own people together to help. We’re trying to encourage others to think about doing the same.”