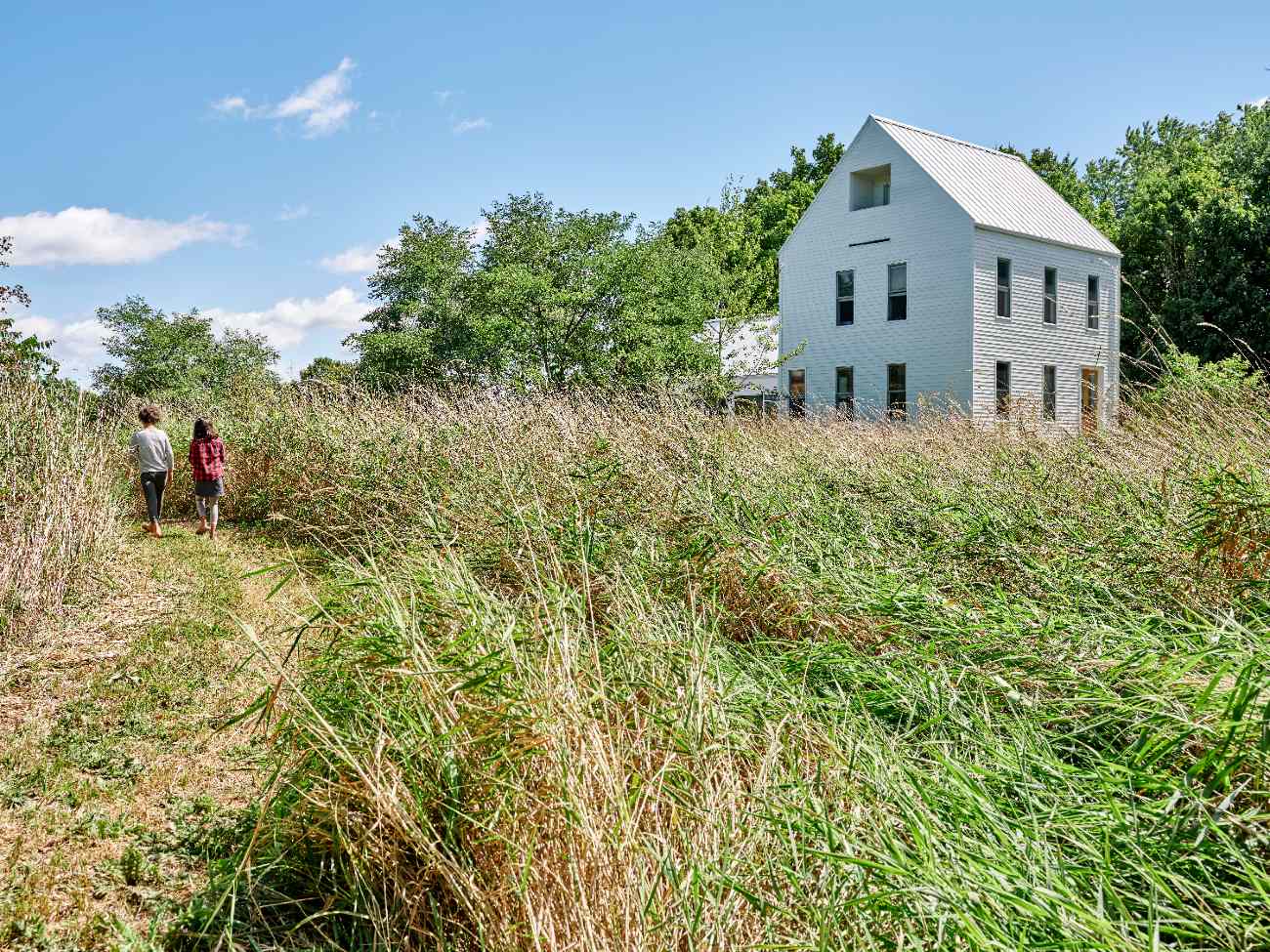 White siding and white metal roofing, by Maibec and Vicwest, respectively, reference the vernacular architecture of the region. Both are also highly reflective and minimize solar heat gain. The windows, by Kolbe and Norwood, are from Ridley Windows and Doors. 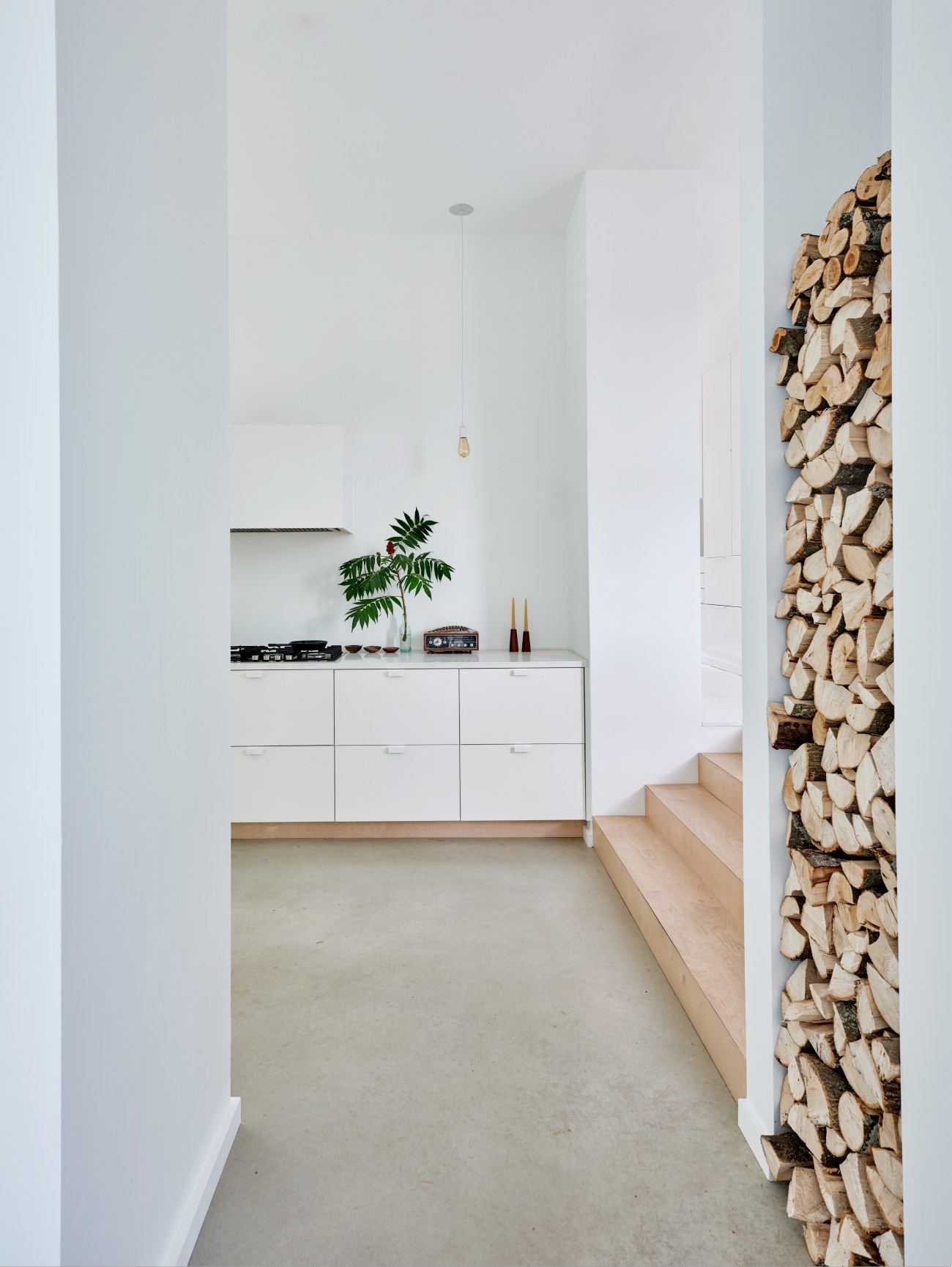 The clients took on much of the build themselves, including the millwork and pouring and polishing the concrete floor. The cabinetry, from Ikea, is topped with white quartz from Take Mike for Granite. Drawer pulls and hardware are from Richelieu Hardware. 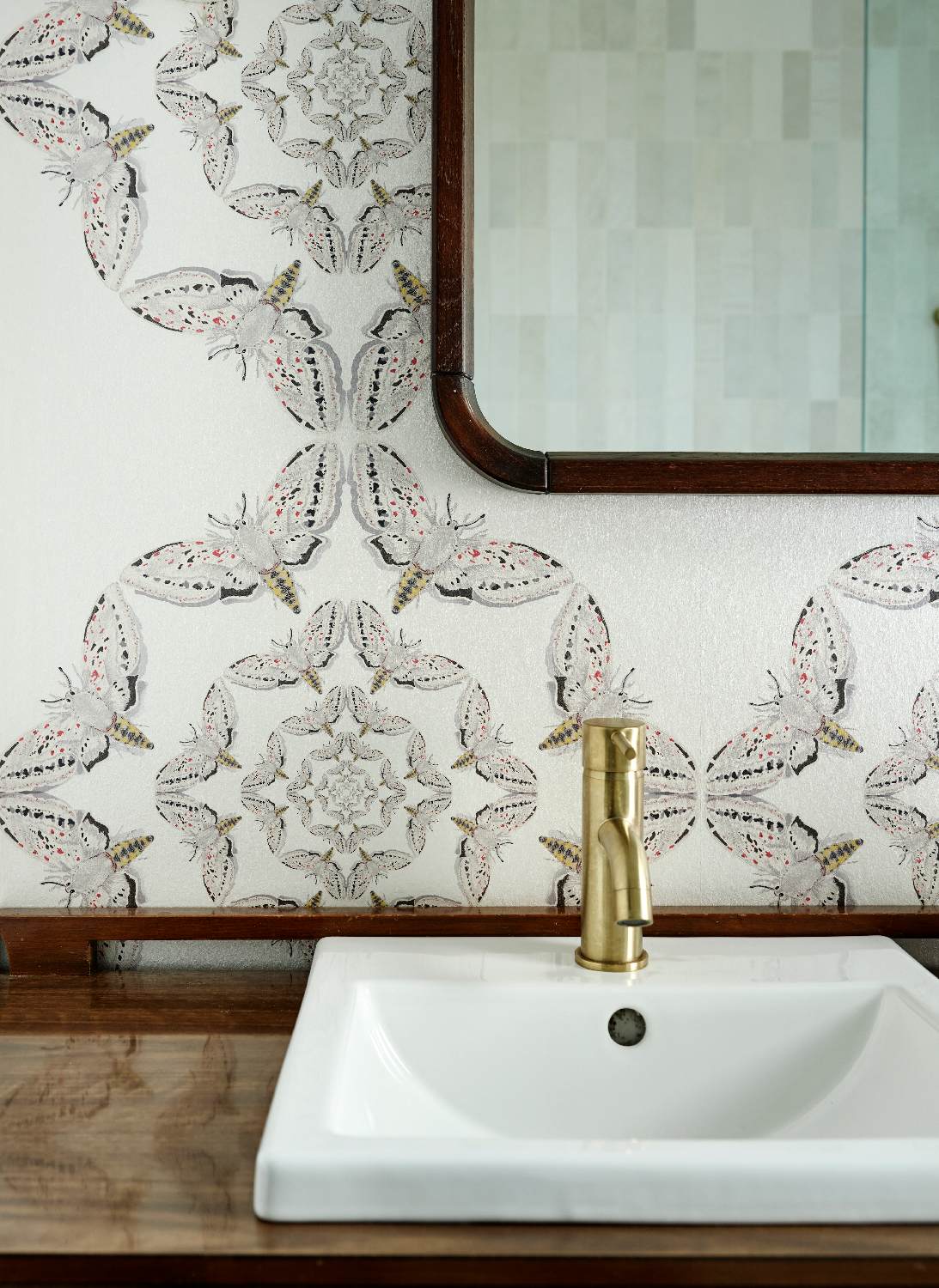 The main washroom features Timorous Beasties' White Moth Circle wallpaper, from NewWall. The mirror and vanity are from Gone Vintage in Belleville. 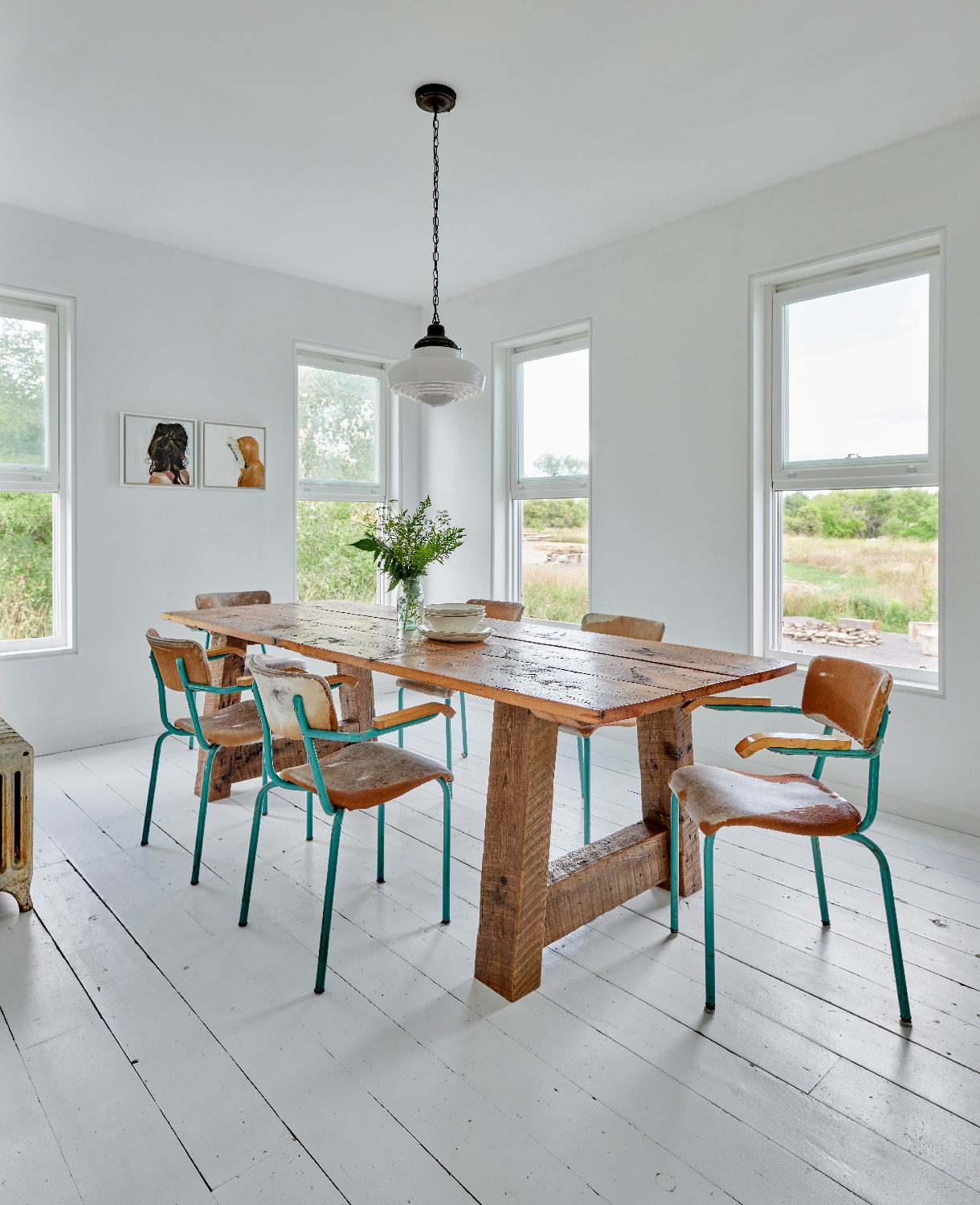 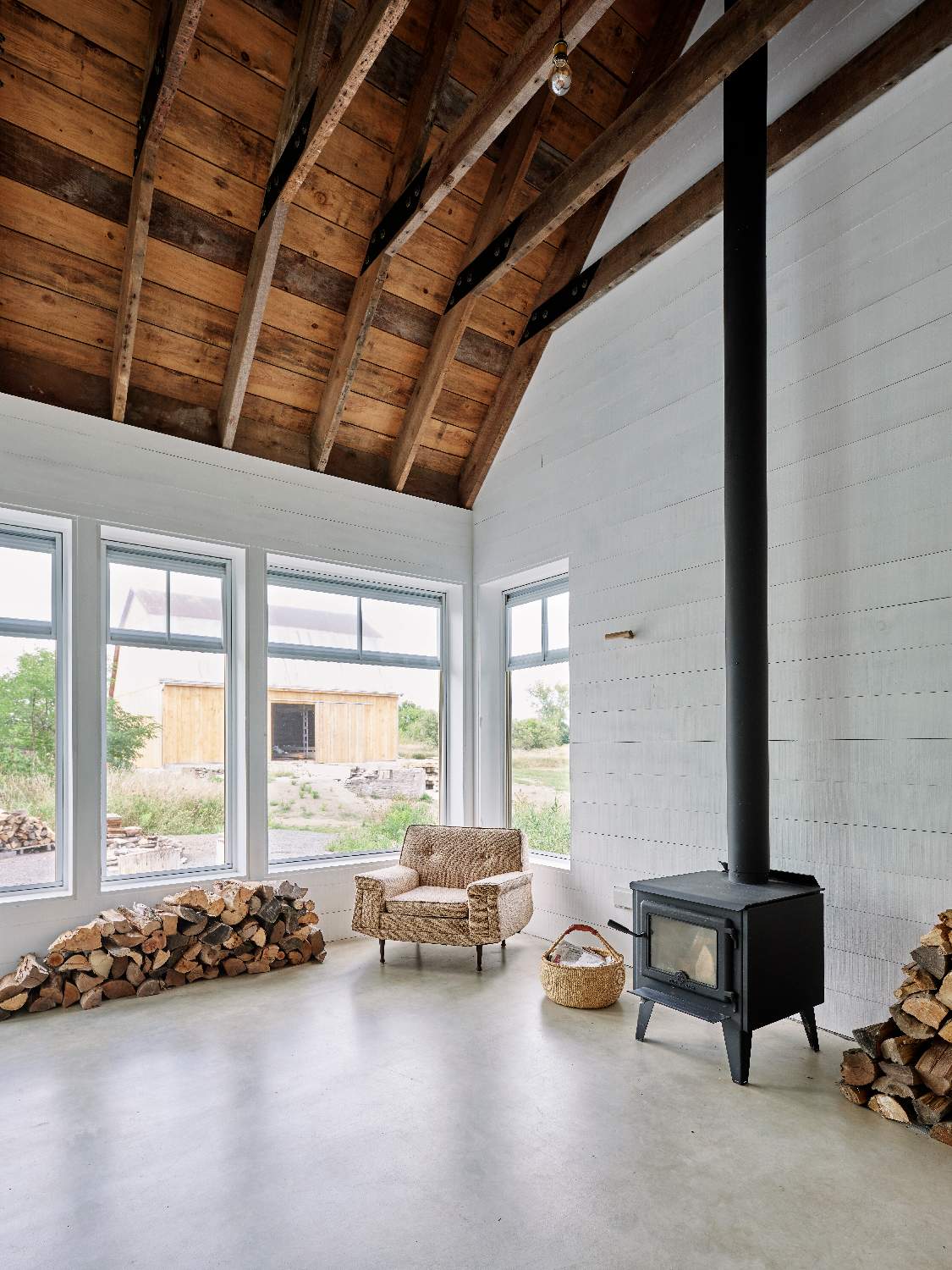 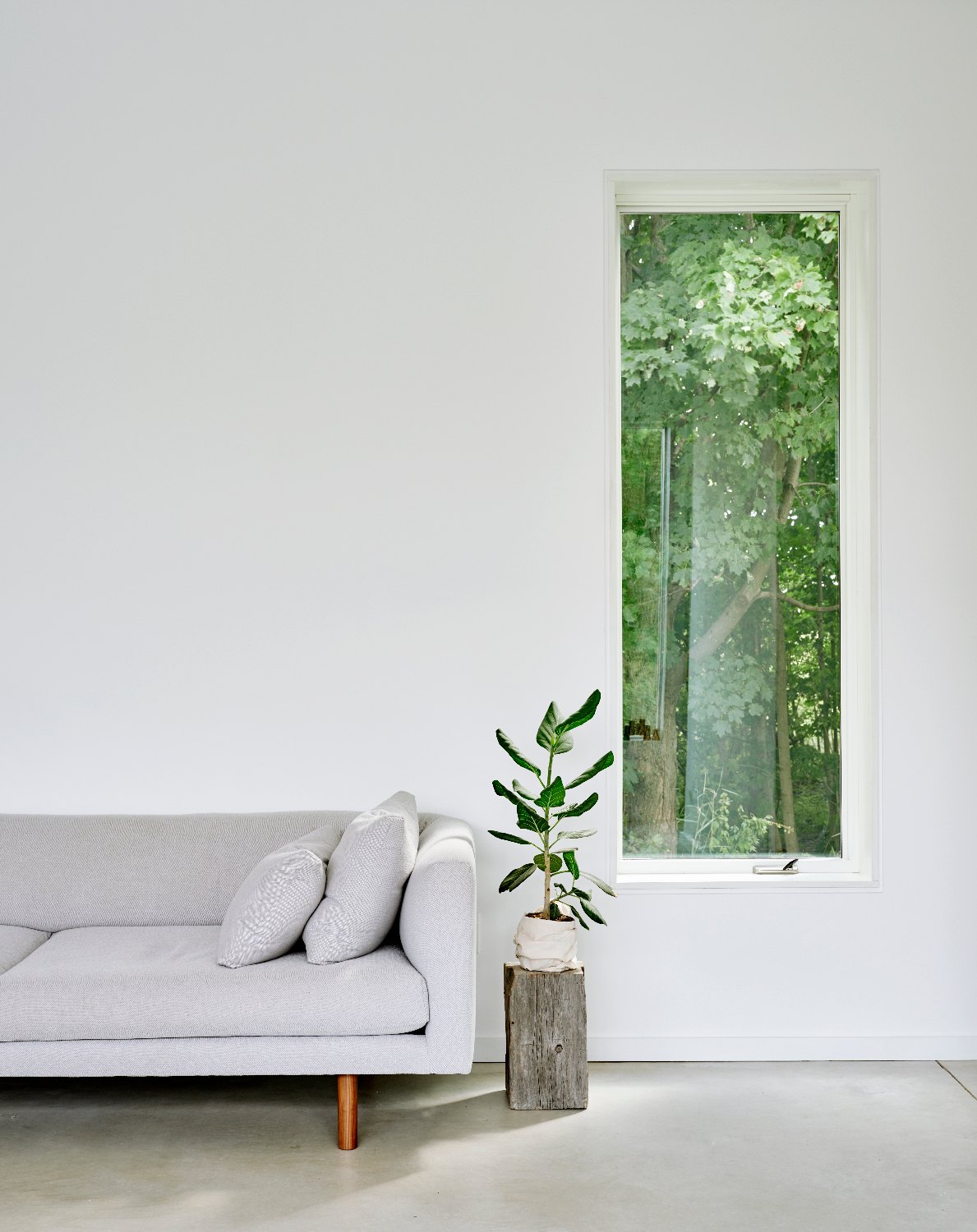 After taking regular trips to Prince Edward County to visit friends, Kristine Remedios and John Silva, a pair of Toronto professionals, decided to find a retreat of their own. After a search that saw them driving down country lanes, they stumbled on a six-acre site at its eastern edge with a dilapidated barn and farmhouse. Despite the condition of the existing structures, the site was perfect: it was a rural idyll, with slight elevation changes and stands of trees to provide some privacy.

The couple brought in architect Nova Tayona. And while a tour of the site made it clear the farmhouse couldn’t be saved, it did provide inspiration. It was unusually tall, with high ceilings and windows that afforded expansive views of the surrounding pasture and farmland. Their recent trip to Fogo Island also saw them fall in love with the gabled stick-framed homes typical of Atlantic Canada. The new farmhouse would reference both, marrying rural Ontario and Newfoundland aesthetics, albeit with a contemporary finish and feel. “They wanted the memory of the old farmhouse, but something more modern and intimate,” says Tayona.

Two centuries after the original farmhouse was built, a second one, consisting of two volumes, went up in its place. Designed in an L-shape, the larger section echoes its predecessor, rising up 2.5 storeys and topped with a loft-like space that overlooks the countryside. A wing off the kitchen and dining area serves as a living room and screened porch, and has broad north-east-facing windows that look on to the barn which, unlike the farmhouse, was rescued.

And like many of Ontario’s loyalist-era homes and barns, Silva and Remedios would build it themselves – well, they built a substantial amount of it. A local contractor, Matt Morey, handled the exterior, including the framing and envelope. But much of the interior, including pouring and polishing the concrete floors, electrical, kitchen installation and tilework, was left to them (Tayona usually doesn’t agree to such extensive DIY, but was already familiar with Remedios and Silva’s above-average skills). They would take more than inspiration from the original homestead for their modern farmhouse, as well. Floorboards were salvaged, painted white and re-used throughout, while the original floor joists were re-purposed as roof trusses in the home’s wing. Minimally adorned and with a palette defined by white, grey and blonde hardwood, it speaks to the original homestead – even if it does have a flair for the modern. NOVATAYONAARCHITECTS.COM