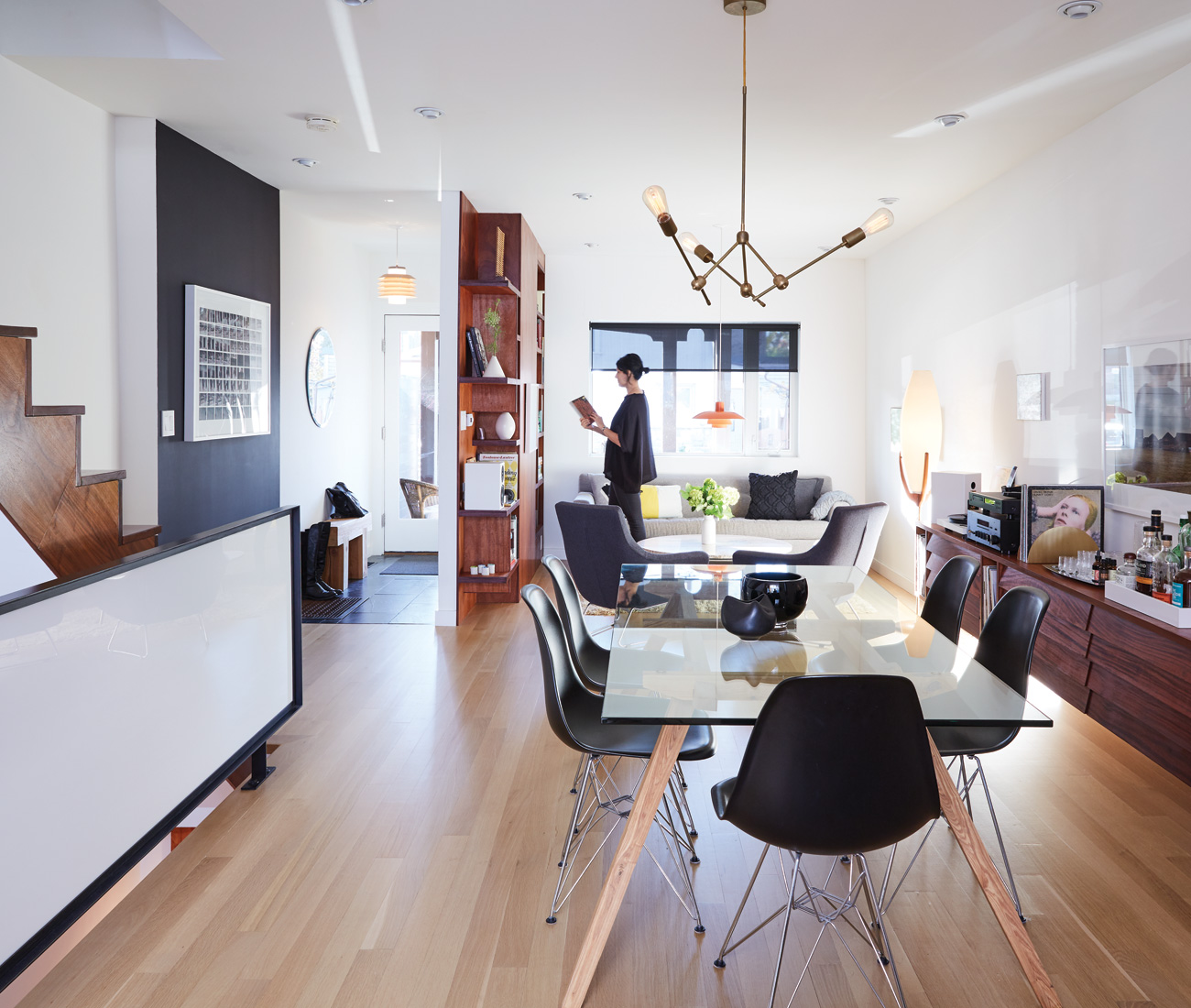 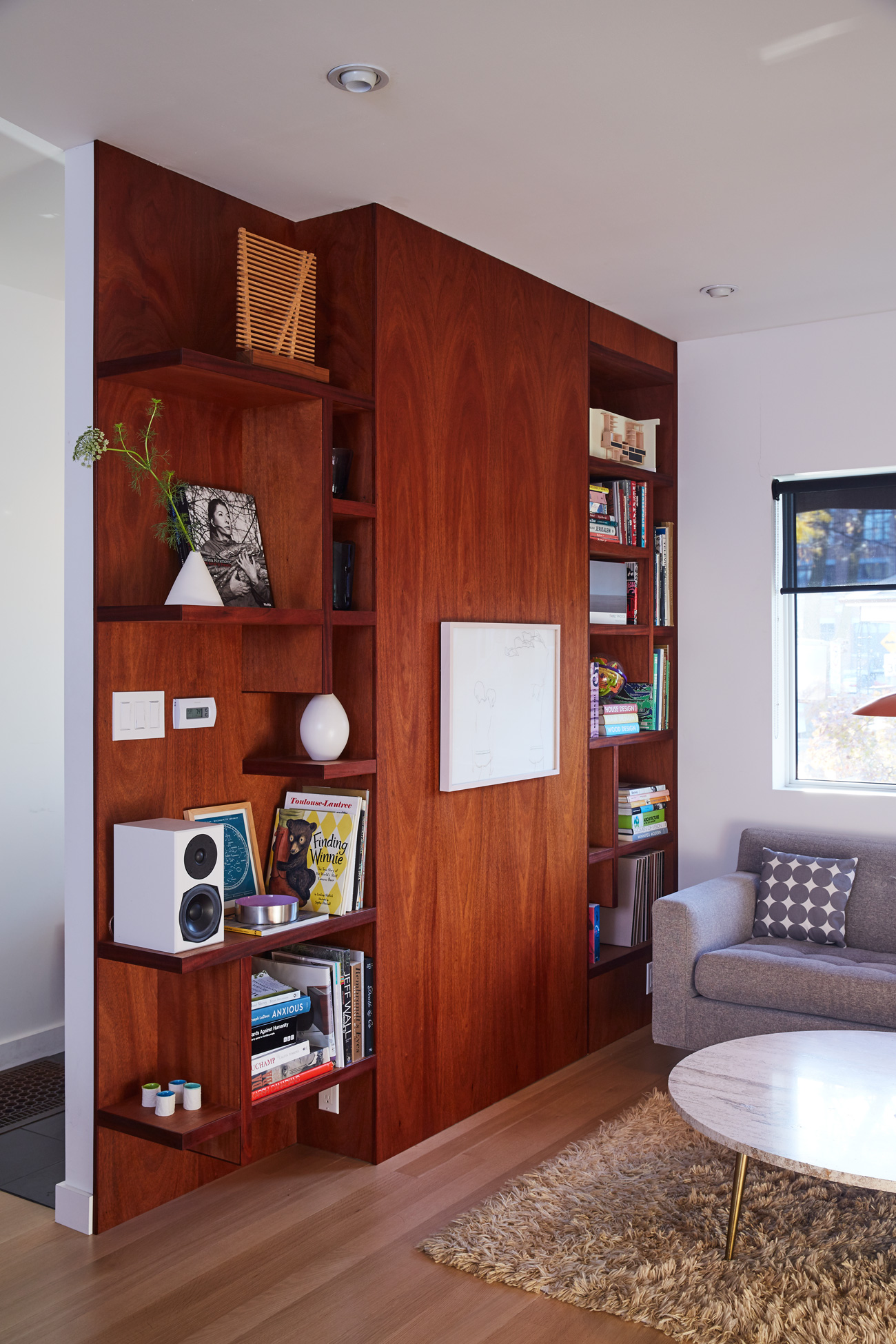 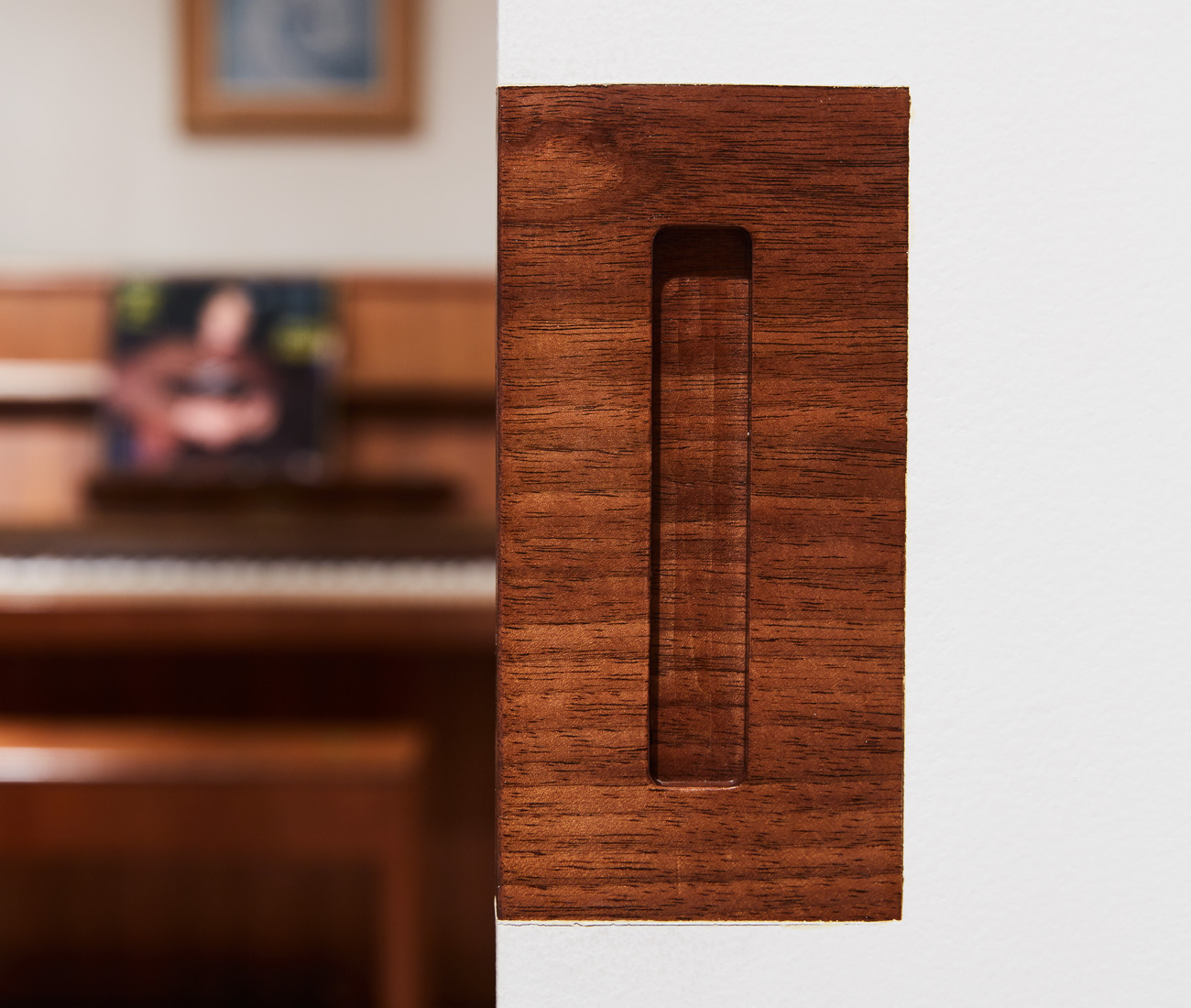 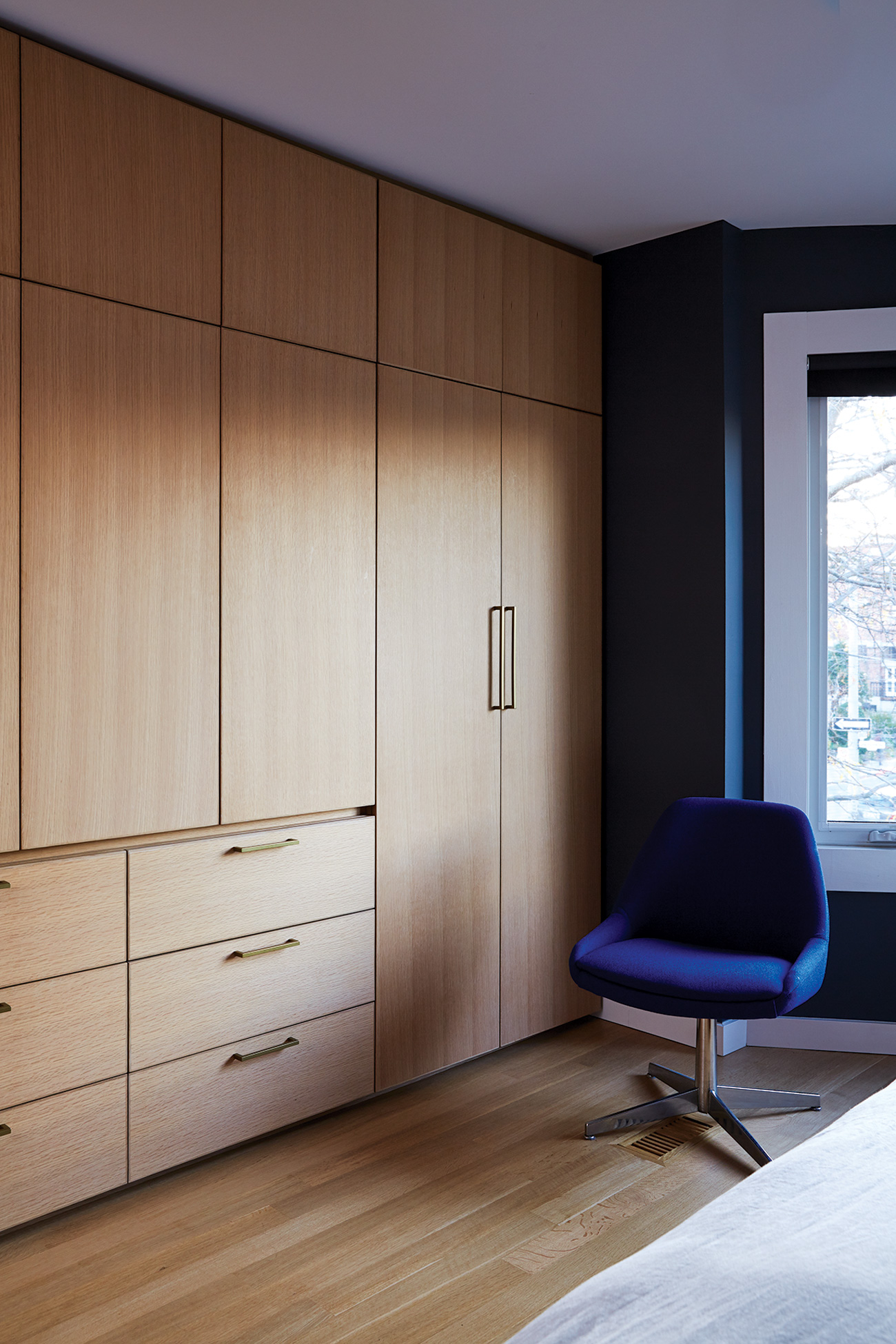 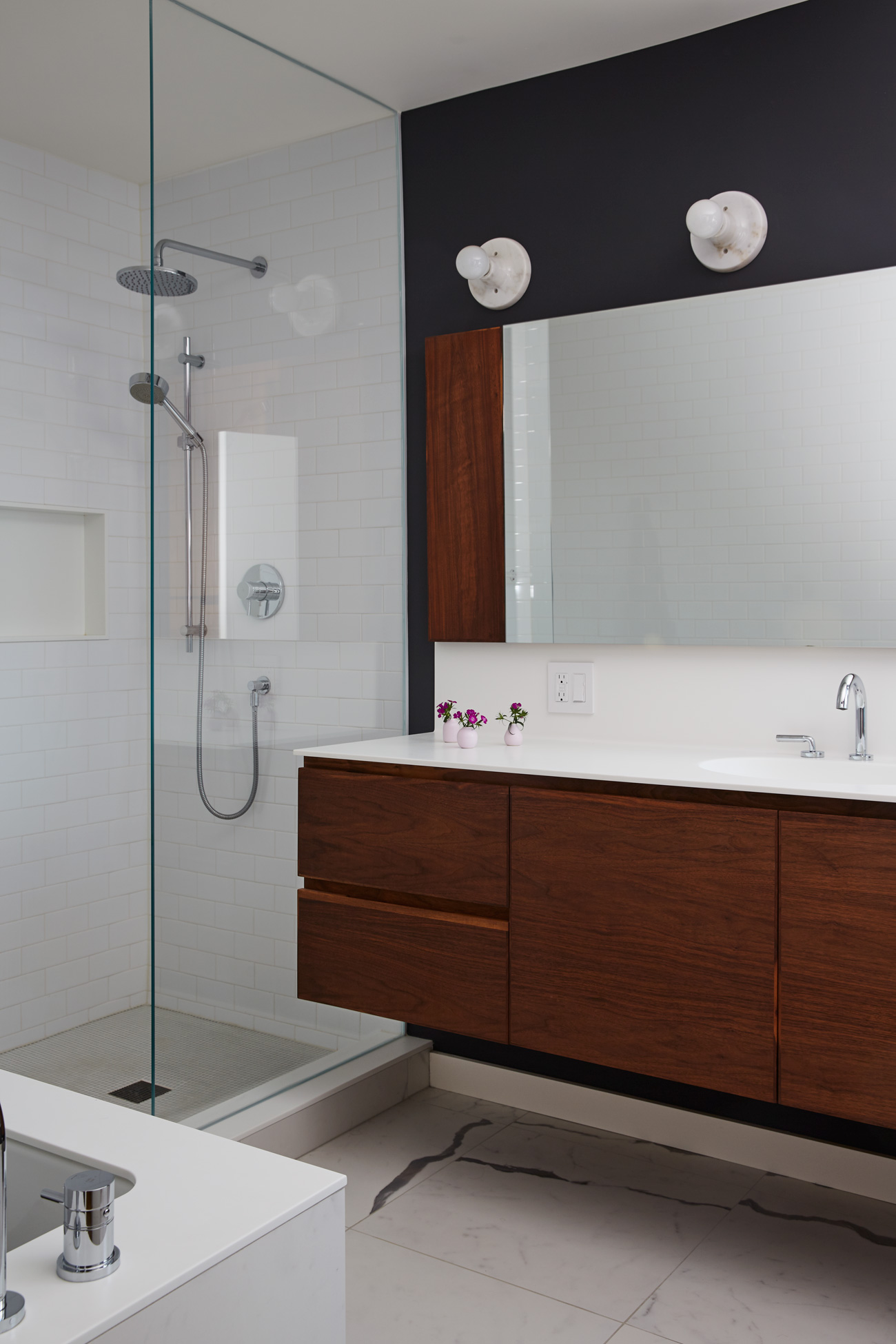 The bath’s focal wall plays up the veins in the porcelain (from Stone Tile). A custom mirror from CGA Glass accents Lynn’s Corian-topped walnut vanity. 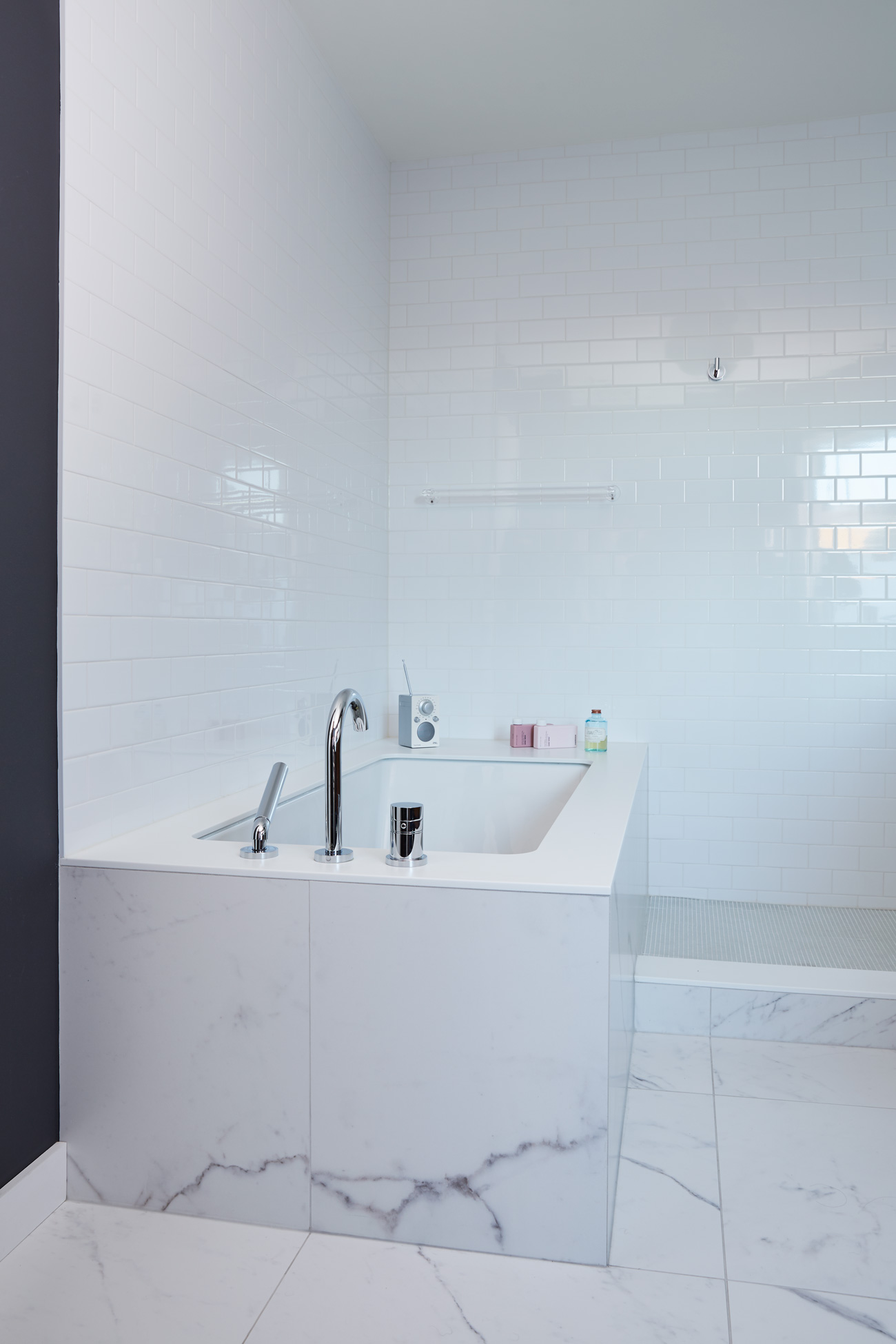 How a millworker and a philosophy prof built a truly simpatico home out of mahogany, oak and walnut

“It was a disaster zone.” That’s how Karyn Freedman describes the century-old house in Brockton Village that she and partner Bruce Lynn bought nine years ago. “I’m not sure you’re allowed to sell a house in that condition,” Lynn pipes in.

The previous owner had given up mid-demolition. Luckily there was an intact apartment on the upper two floors. That’s where the couple lived when they started renovating the 145-square-metre house from the basement up in 2007. The original plan was to finish in five years. It took eight. And while it might have driven anyone else crazy, the prolonged gestation period paid off.

“It ended up benefitting us because we got to see how we wanted to live in the space,” says Freedman. For Lynn, a custom woodworker who designs and makes furniture, cabinetry and built-ins, it meant waiting years before he could do his thing. For Freedman, a philosophy professor at the University of Guelph, it meant she had to practice Socrates’ dialectical method in her own home. “We fought over almost every decision, but every design got better over time,” she says.

Luckily, the couple agreed on some things: a mid-century modern sensibility with a bit of a Scandinavian influence, but nothing too minimal. After opening up the main floor and bringing in lots of light, their guiding principle was to embrace the warmth of wood – lots of different wood. For example, two staircases were torn out and rebuilt from walnut. “It’s hard to get wood that wide because walnut is so popular now,” says Lynn, “but my dad had some downed trees on his property so we went up to Penetanguishene and cut them up.”

These features complement mahogany cabinets and contrast with the rift-cut, solid white oak floors. “We didn’t want everything white, but then it can’t be too busy either,” says Lynn. “You have to find the balance.” He also avoids using stains on his creations, and instead allows the natural imperfections to give each piece its character. For a unique touch, he occasionally adds what he refers to as a “James Bond trick” – a sliding panel to hide the kitchen TV or a secret cache behind the basement bookcase.

“What a lot of people do when they renovate their house is say, ‘Let’s get this over quickly.’ But we were happy to let it drag on,” says Lynn. Years of debates and labour have resulted in a space where everything from the arrangement of window panels in the kitchen wall to the finishing on a sliding door handle is made that much better because it is imbued with a sense of prolonged contemplation.