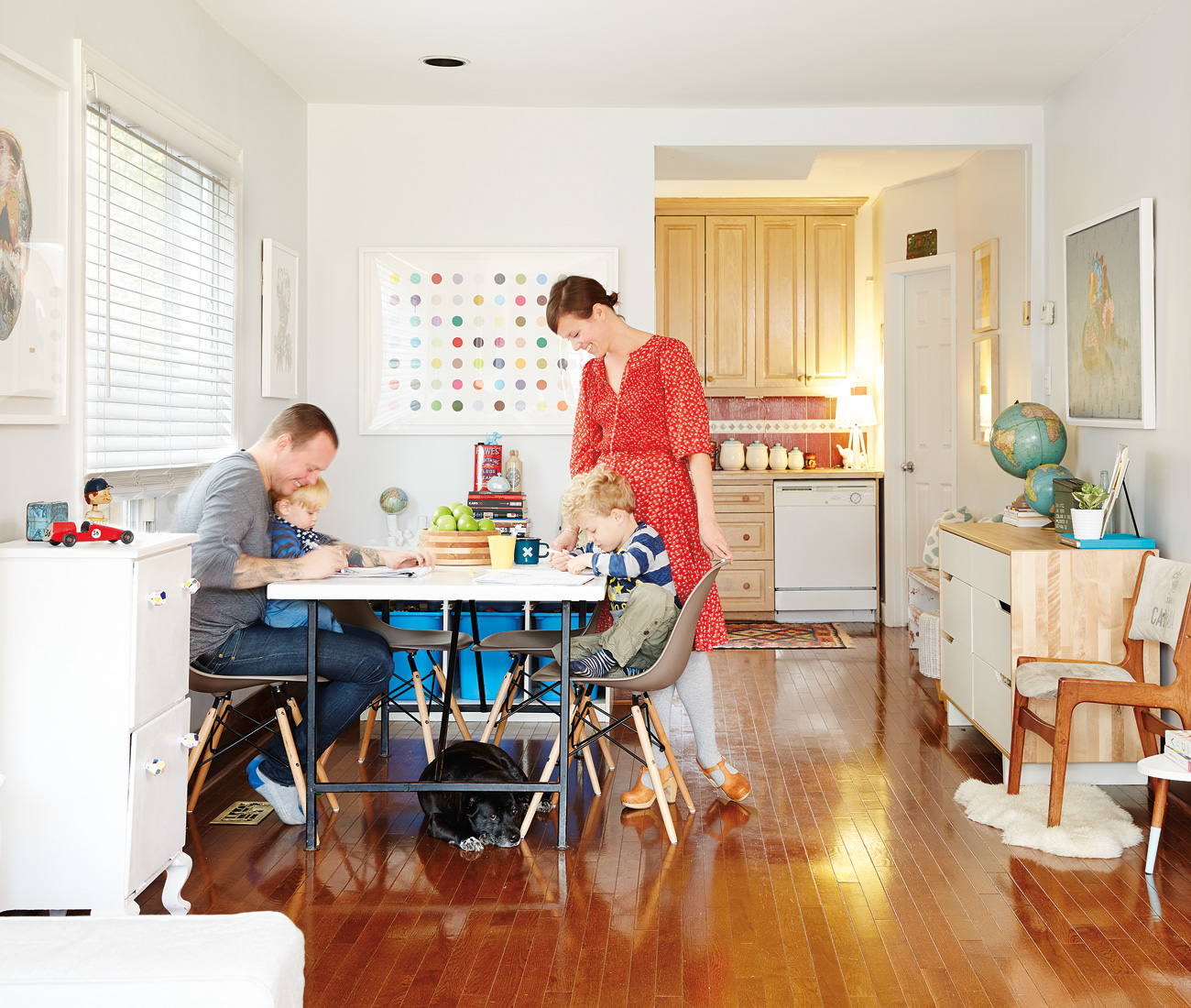 In the dining room/atelier, chairs are from Design Republic; dotted silkscreen by Beejoir. 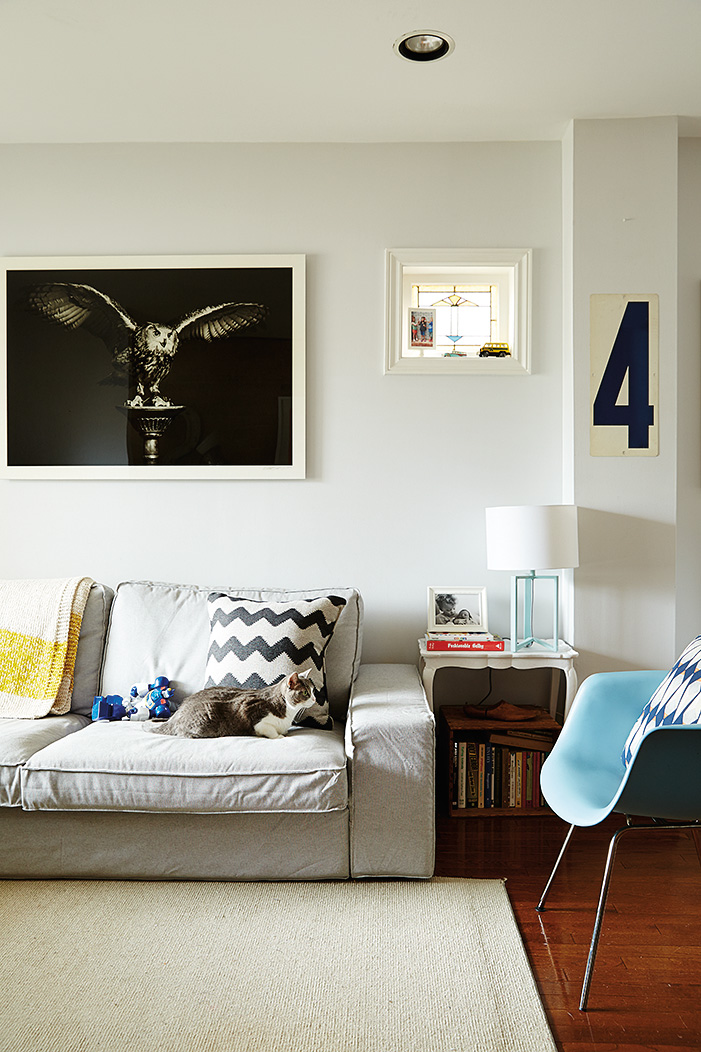 A photo by Toronto’s Matt Barnes holds court over the IKEA sofa. Pillow and throw from Ziggy’s; Eames chair from Machineage Modern. 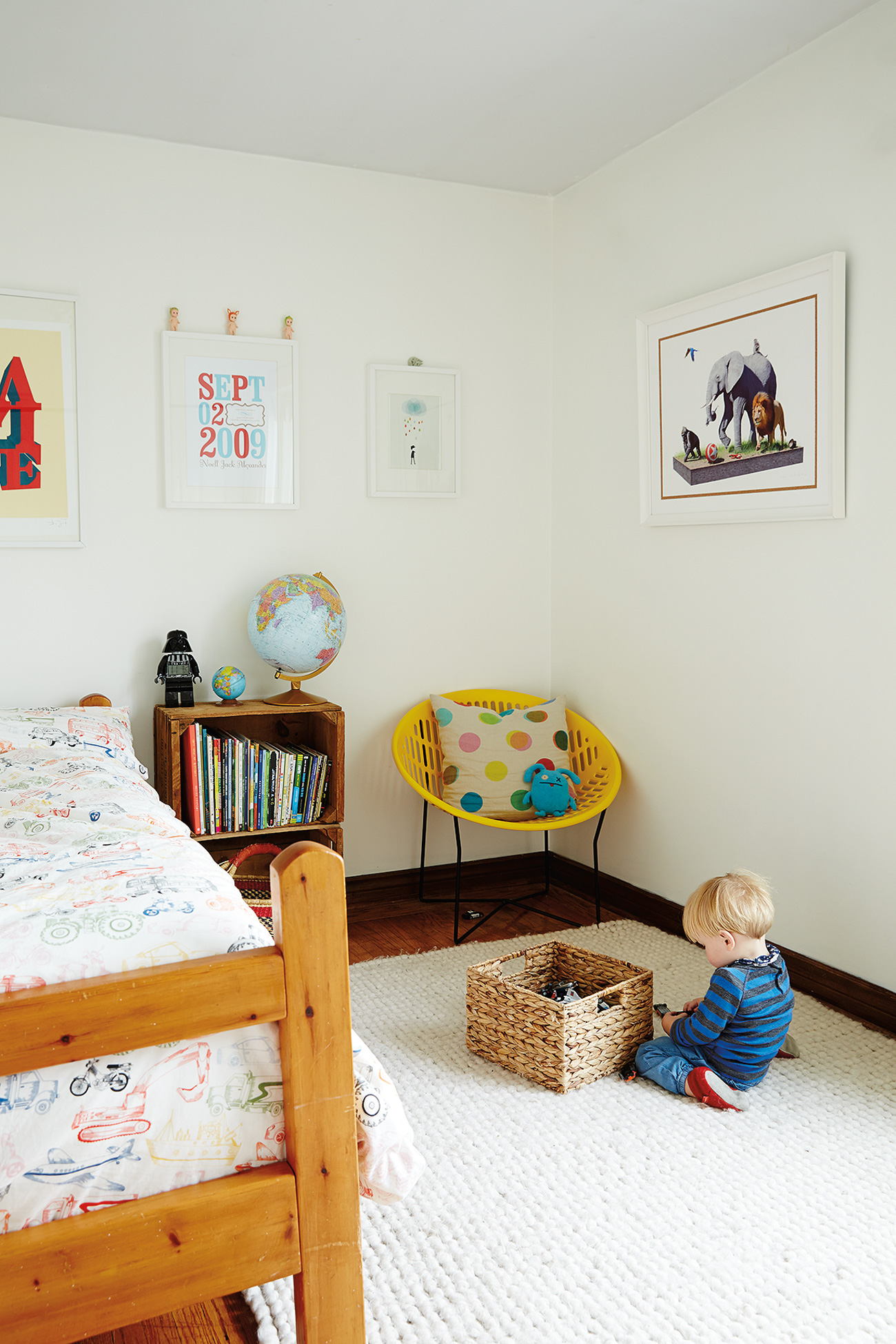 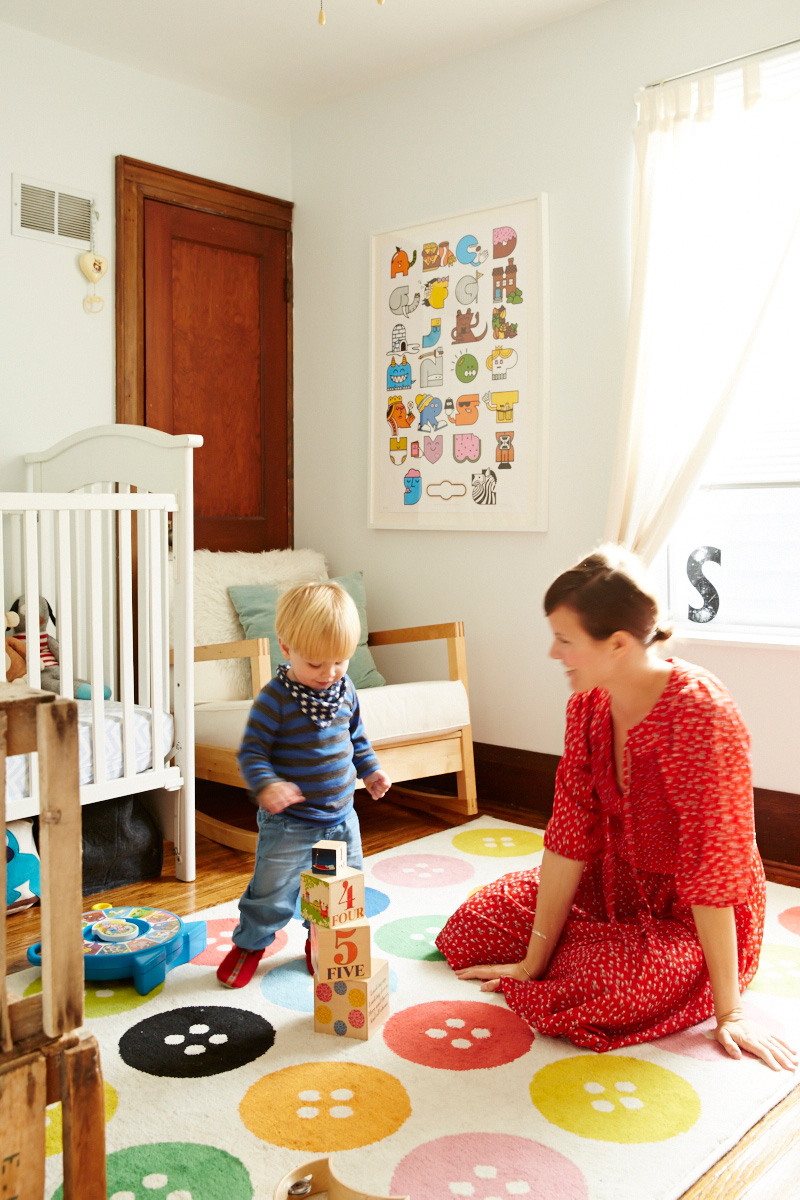 Behind Jo and Selby, an alphabet piece by Mike Davis of Burlesque Design. 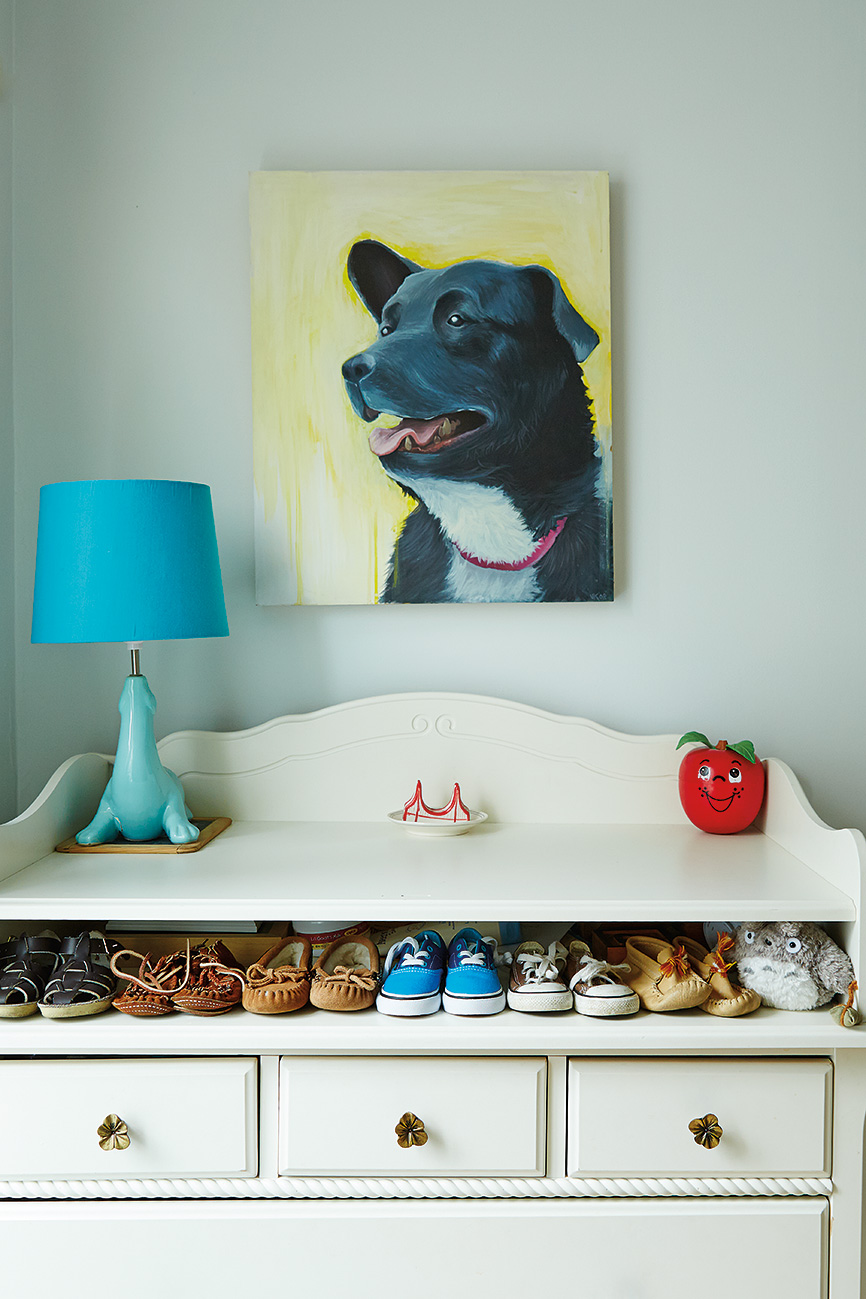 Above one-year-old Selby’s dresser is a portrait of the family dog, Lucy, by Toronto artist Vlad Kato. Lamp from Urban Outfitters. 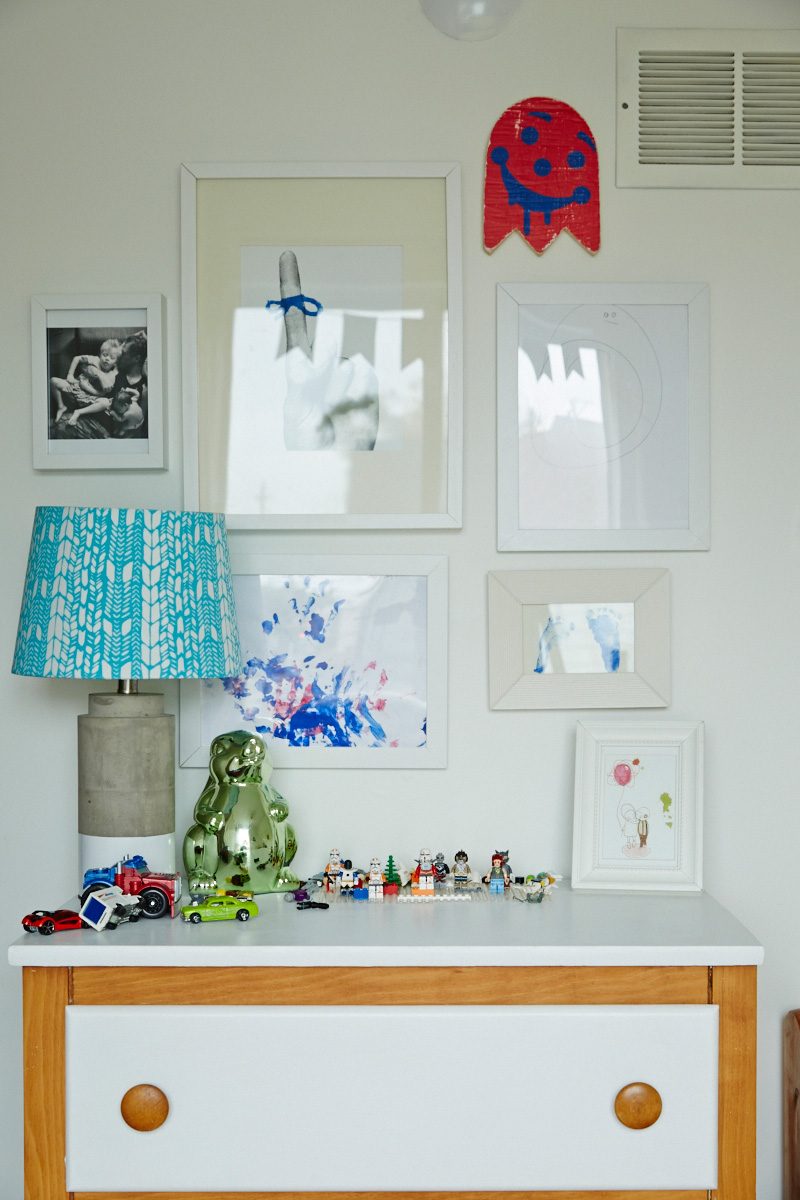 A cluster of Noell's artwork shares space with family photos and a "Forget Me Knot" print by Federation of Ideas. 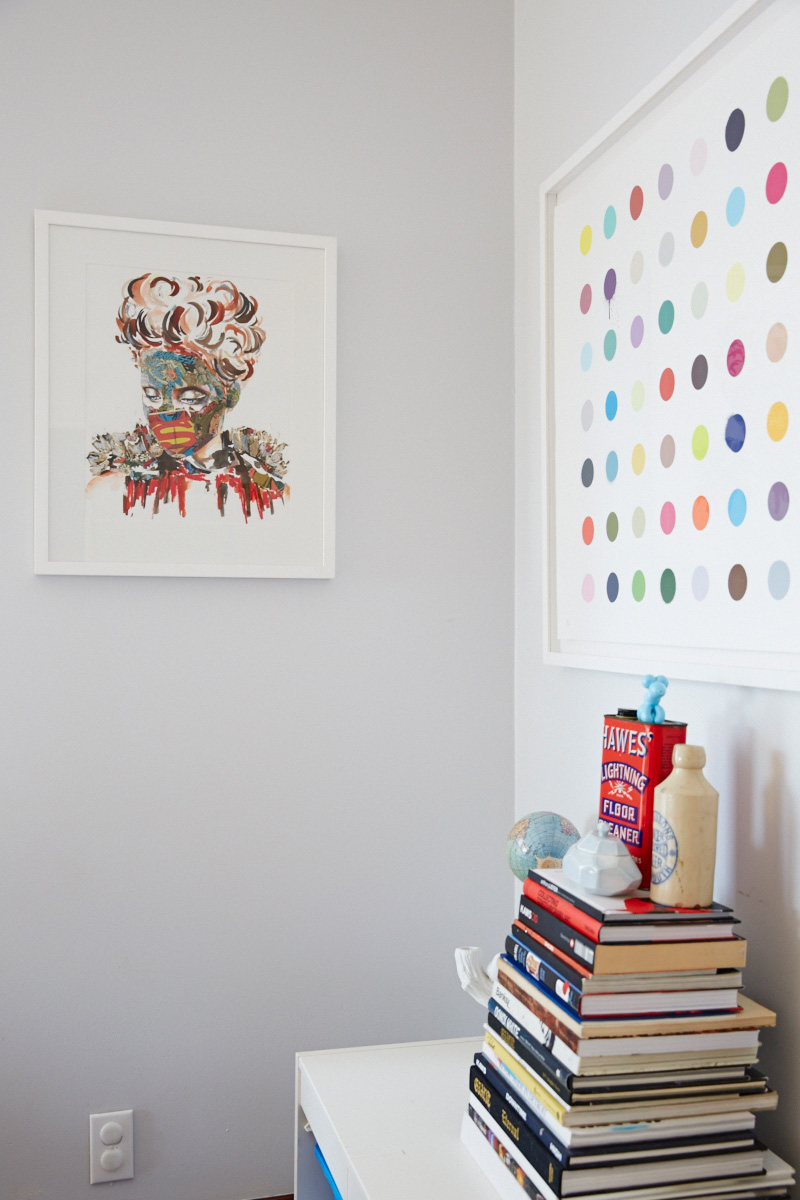 A painting by Sandra Cheerier ("The Cage and the Explosion of the Flowers") hangs next to a 70 colour screen print by Beejoir. Below it is a stack of art and graffiti books. 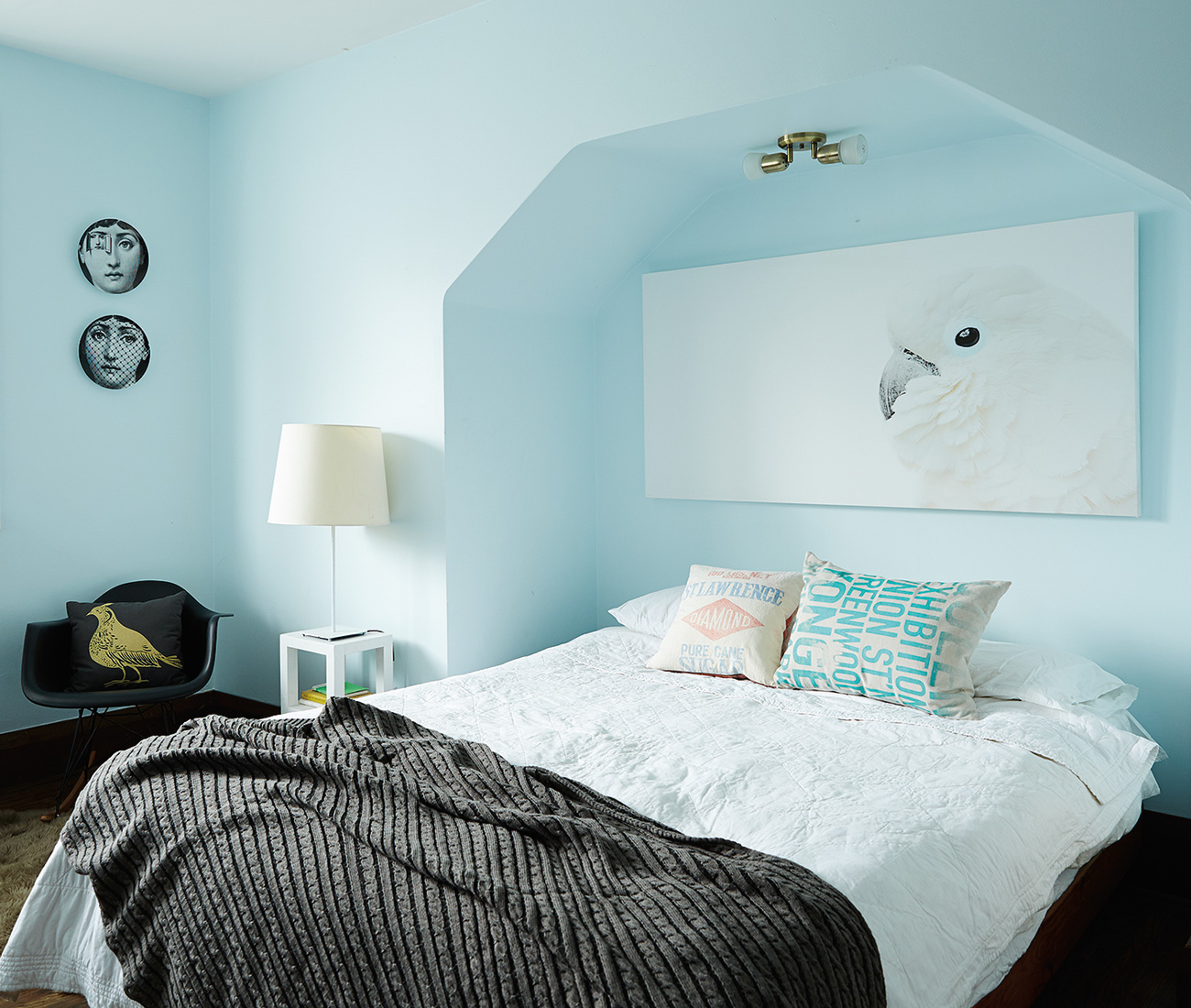 A photo by Nick Simhoni tucks neatly into the master bedroom’s quirky alcove. Pillows from Good Neighbour and West Elm; throw from Ziggy’s. 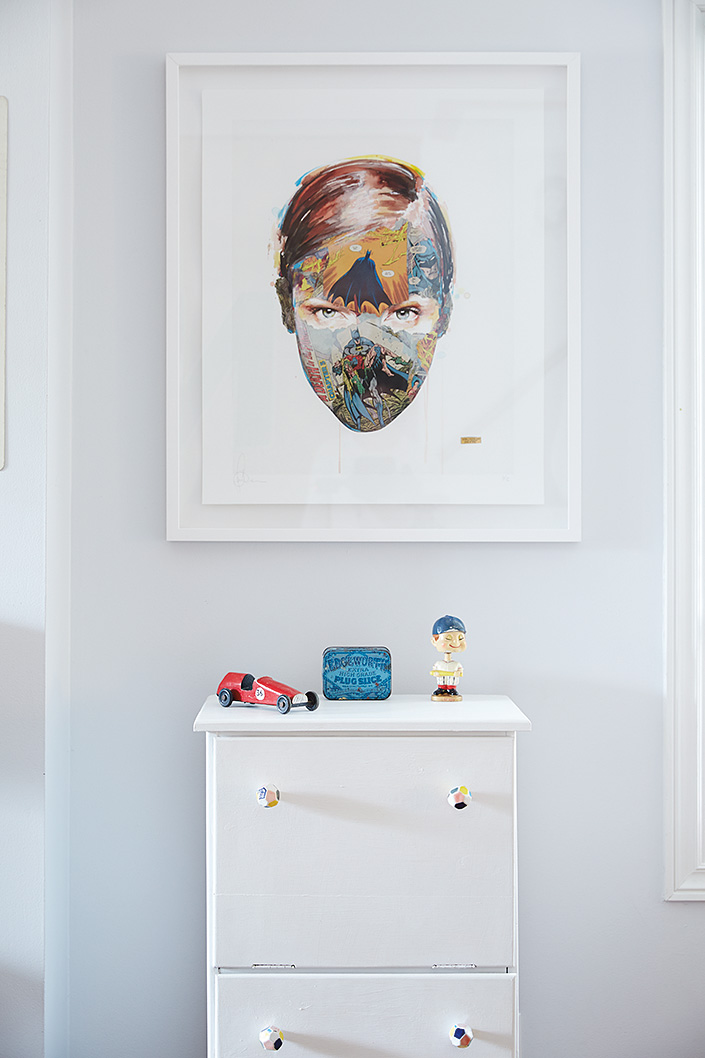 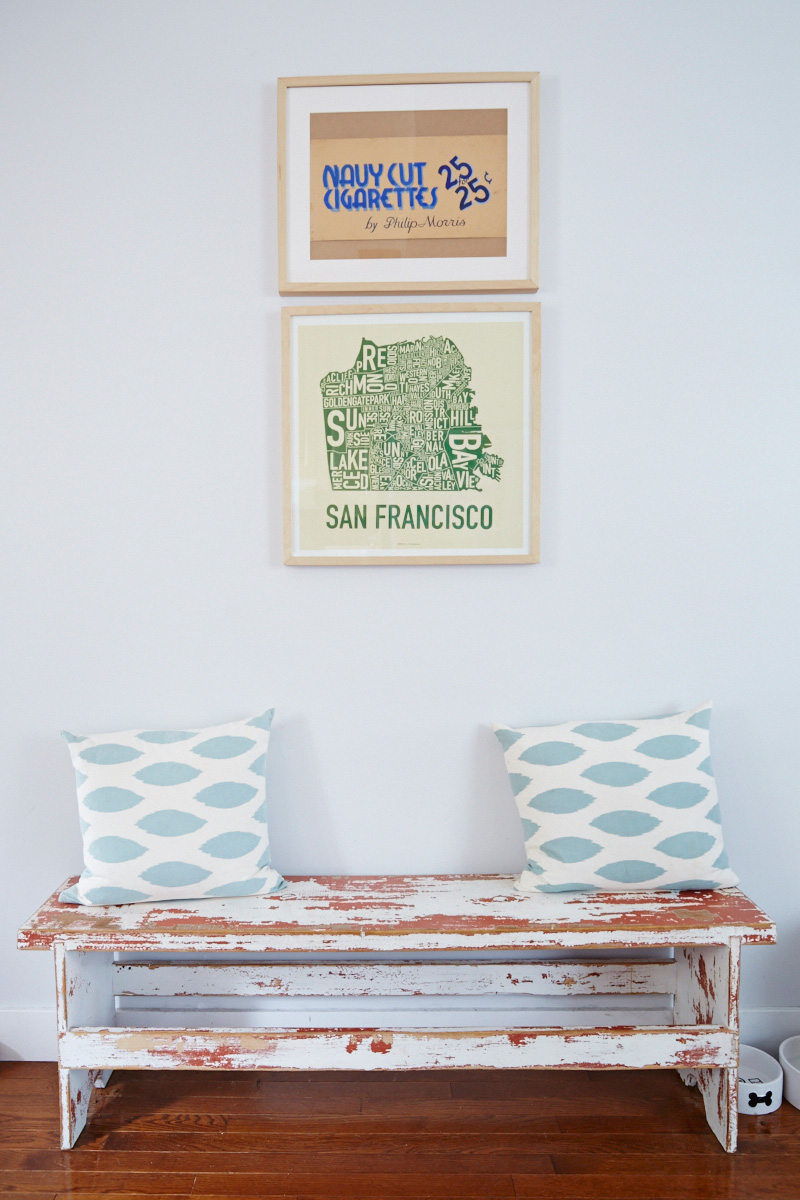 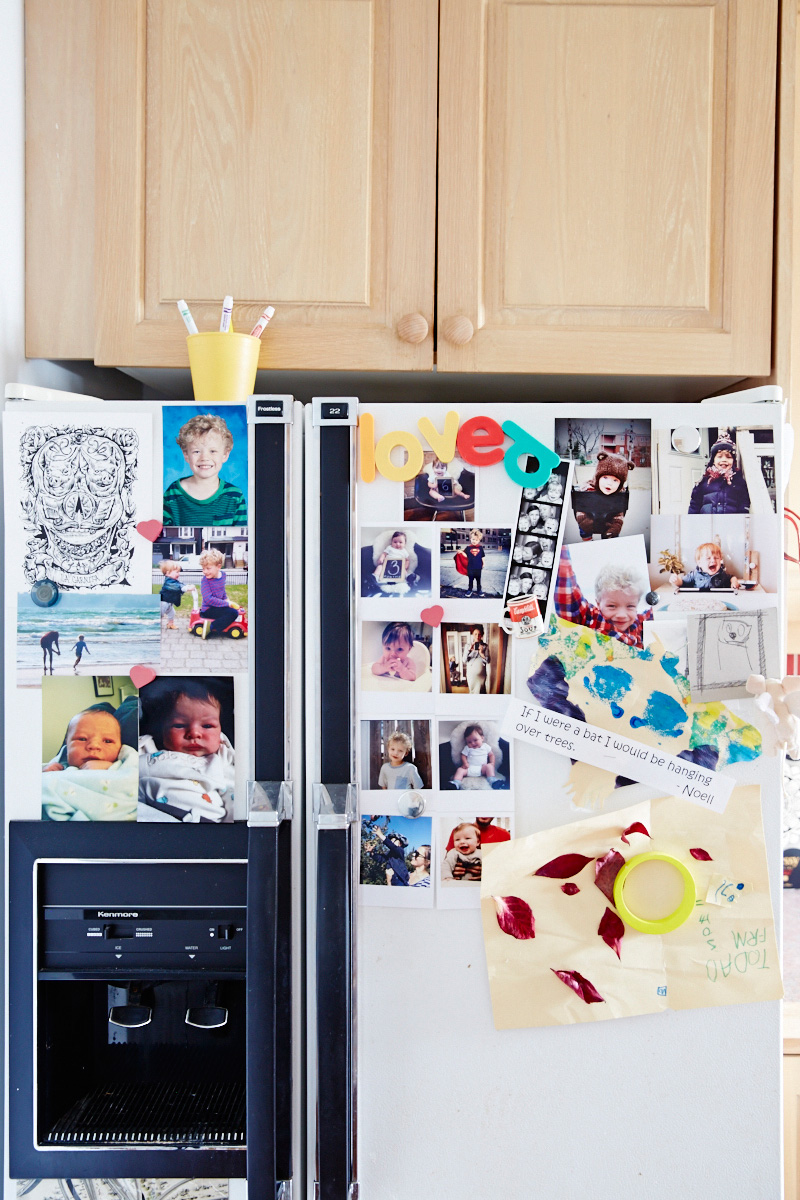 She found the teak Scandinavian chair at Value Village and reupholstered it with a vintage Canada Post bag. He sold a painting by one of his favourite artists to buy the Banksy Grannies silkscreen hanging over the fireplace. Together they found the library table – with gum still stuck to the underside – at Machineage Modern, and when their kids doodle over the repainted white surface no one bats an eye.

Jo Arnott learned the art of thrifting by going to garage sales with her parents in Toronto’s west end. Today, she works as a doula but supplies vintage goods to local purveyor Good Neighbour on the side. Clay Rochemont, who grew up in Toronto, and later in the Los Angeles and San Francisco graffiti scenes, moved back to the city to curate exhibitions with artists he came to know while living south. A creative strategist for an advertising agency, he has since curated several street-art exhibitions in large industrial spaces, including the Evergreen Brick Works. The couple’s playful Leslieville home reflects their combined sensibilities, but also inspires their two sons, aged five and one, with thought-provoking art and carefully rehabilitated objects from yesteryear.

A quick glance around the open concept main floor reveals connections between her antiques and his collection of street and post-graffiti art. An old detergent tin’s vintage typography is echoed by retro tattoo designs – original ink drawings by Mike Giant – that line the stairs. Sitting on a repainted side table, knick-knacks from another century hold their own near a 2014 tile print of an 8‑bit ghost, by the artist Space Invader, that hangs over the TV.

Upstairs in the boys’ bedrooms, the fusion of old and new styles bumps up against the added dynamic of grown-up versus child-like sensibilities. Rochemont points to five-year-old Noell’s favourite piece: a print featuring circus animals set free, which looks straight out of a 1950s storybook. Titled Exodus (by Josh Keyes) it is whimsical, but it also has a darker side: the lion tamer’s gear is scattered on the ground as if he was recently eaten.

“I like the stories behind the things,” says Arnott. “They’ve had so many lives.” Be it a weathered fish box picked up from the Aberfoyle Antique Market or a painting by Rochemont’s latest discovery, there’s always something new – even if it’s old – to find here. With that, Noell announces his own contribution to the family collection. As serious as a seasoned museum curator, he gestures to the side of a wooden dresser that is visible only from his bed: a Transformers sticker is stuck there. His dad couldn’t be prouder.

Originally published in our Spring 2015 issue as Art House.