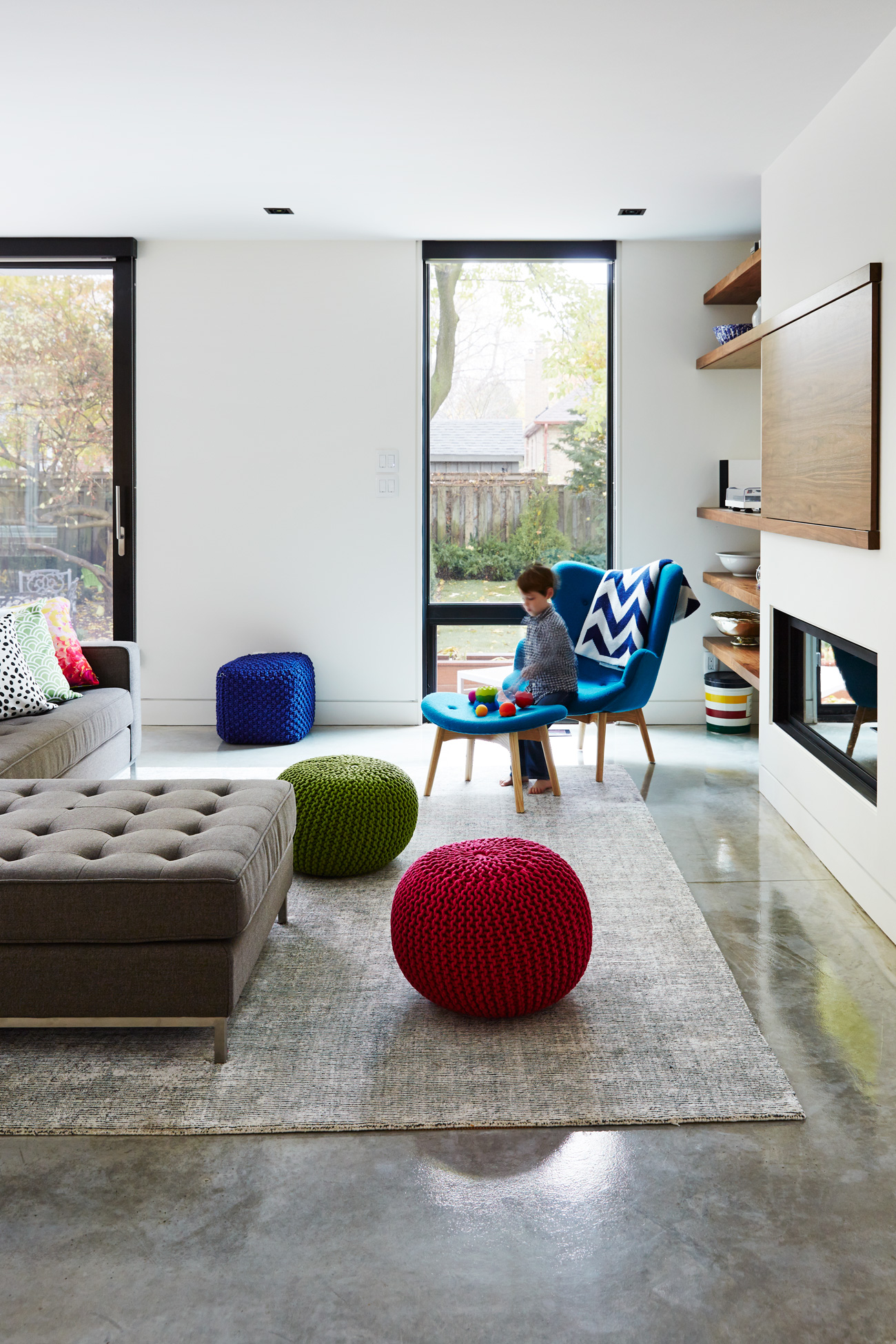 A walnut shelving unit branches out with a sliding TV cover. Sofa from Stylegarage; rug from Elte Market; windows by Ridley. 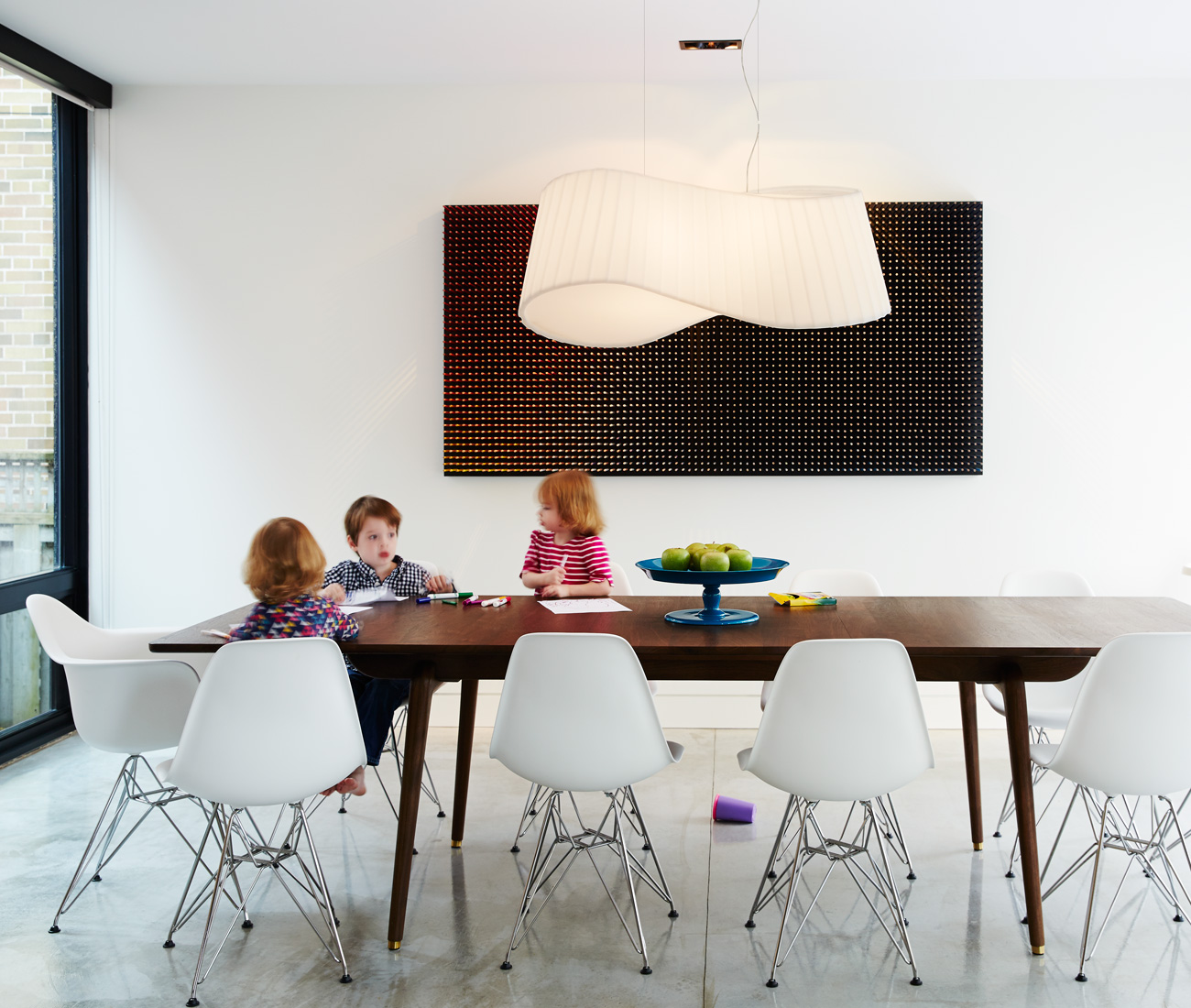 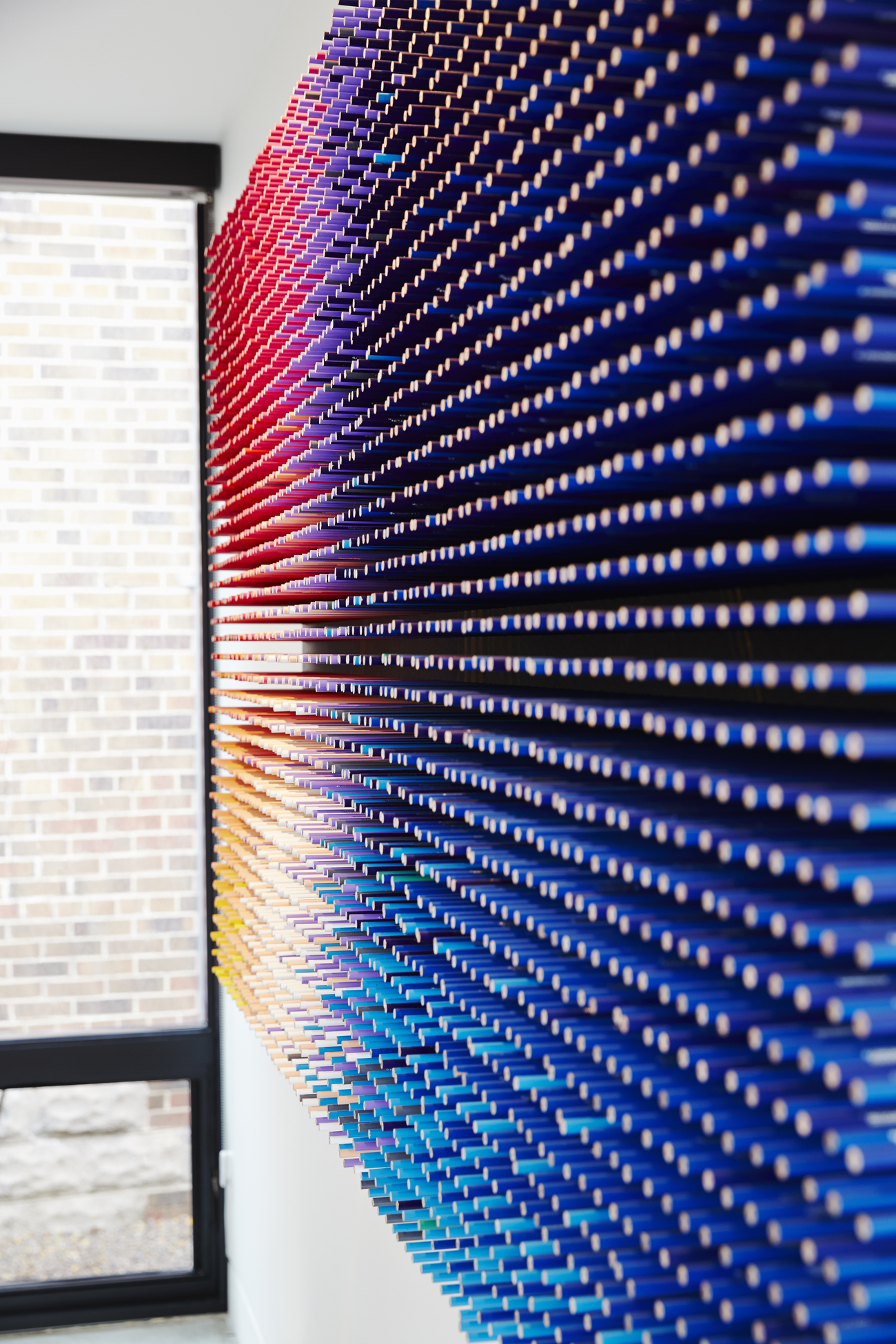 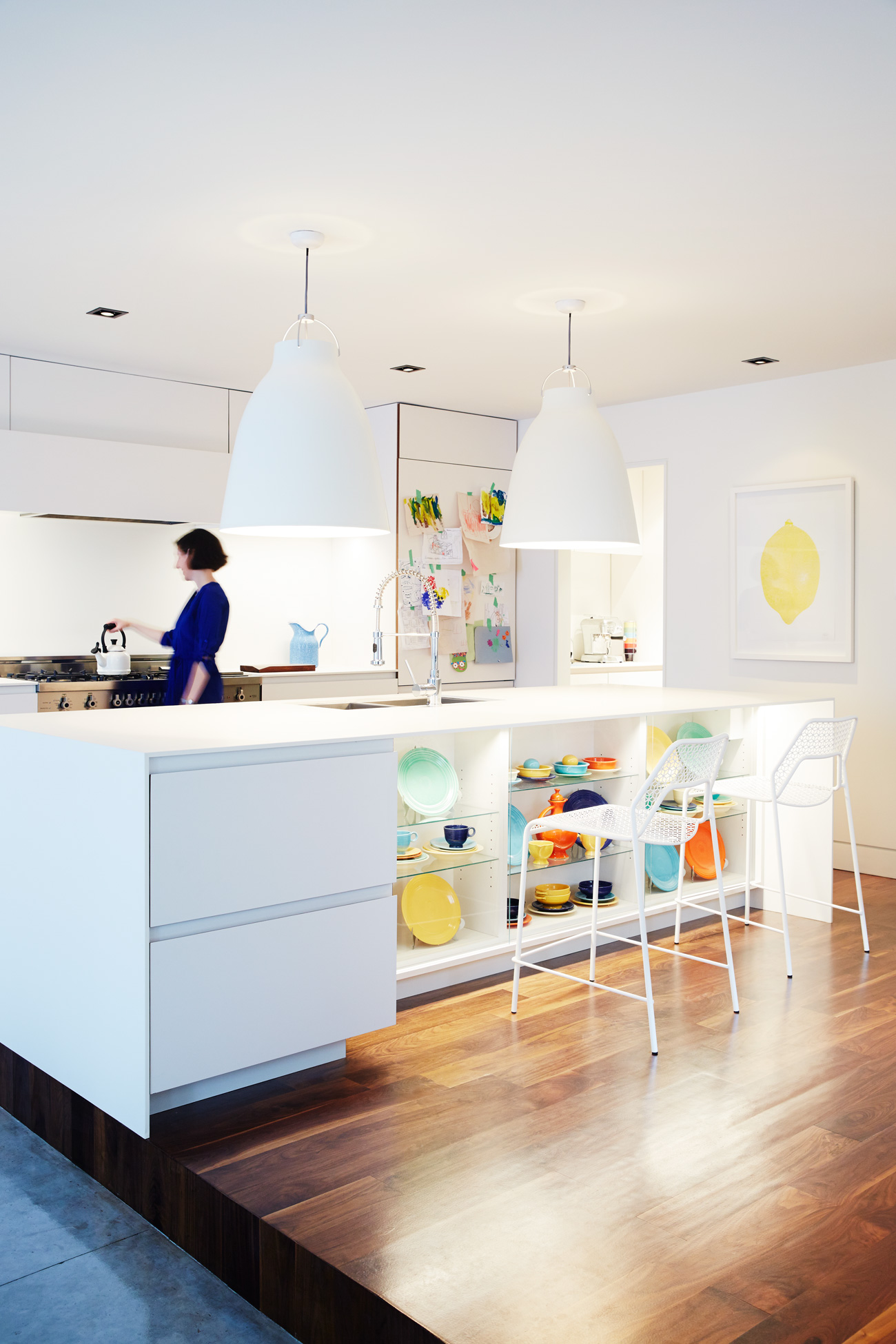 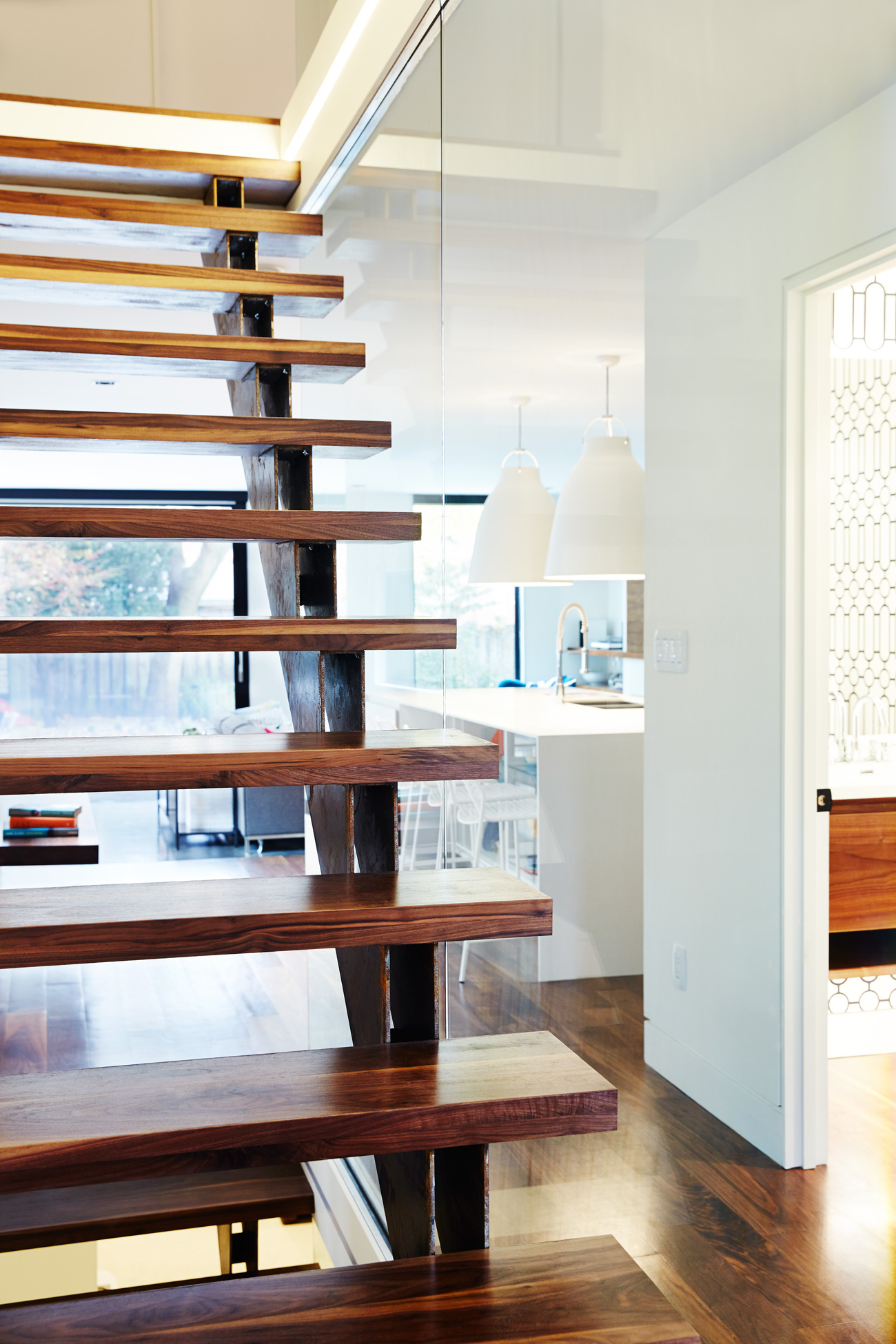 The open-tread staircase with two single stringers and glass railing spans three storeys and offers views from the foyer to the backyard. 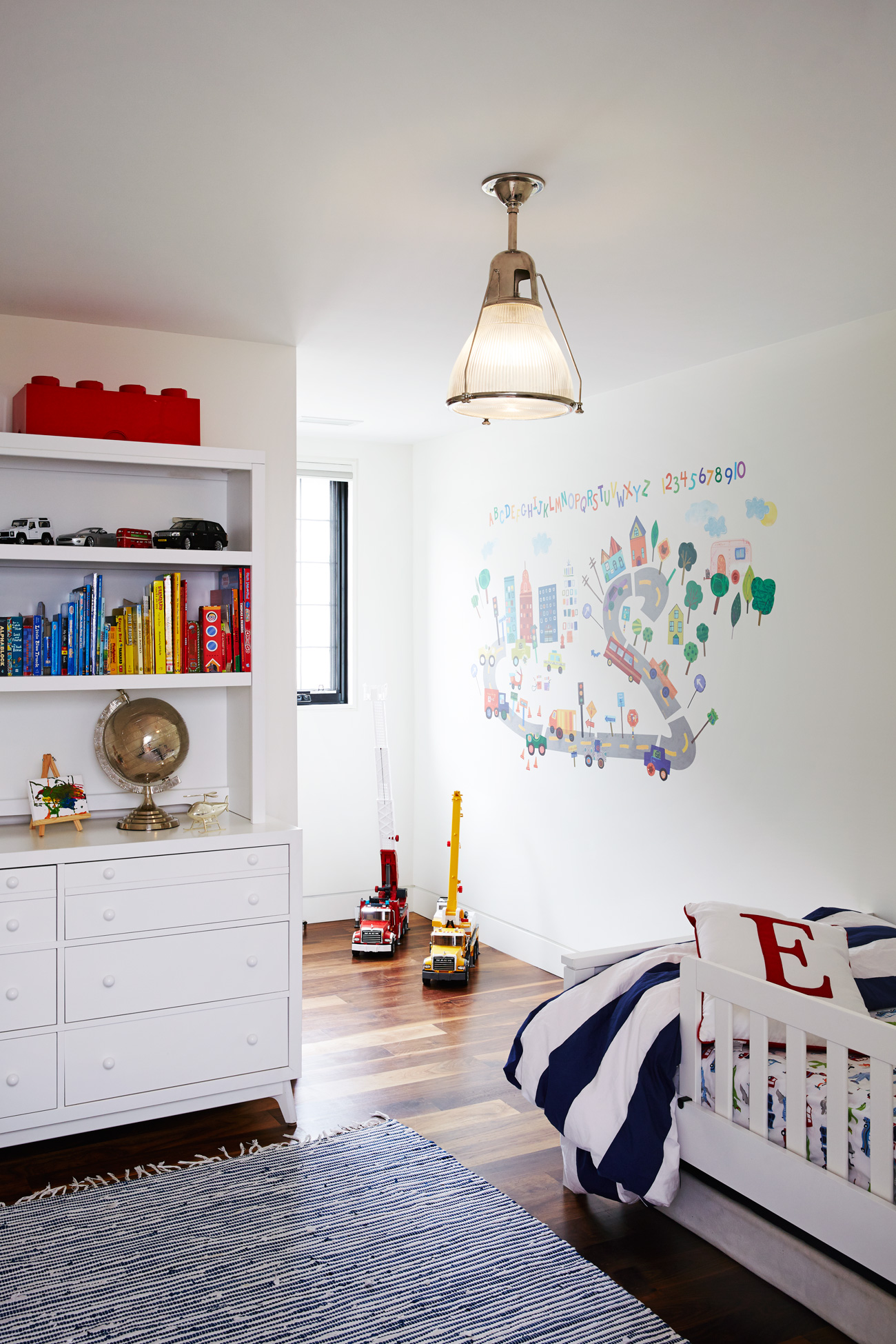 The new north-facing dormer enlarged the kids’ bedrooms; an upper-level HVAC system is tucked behind closets. 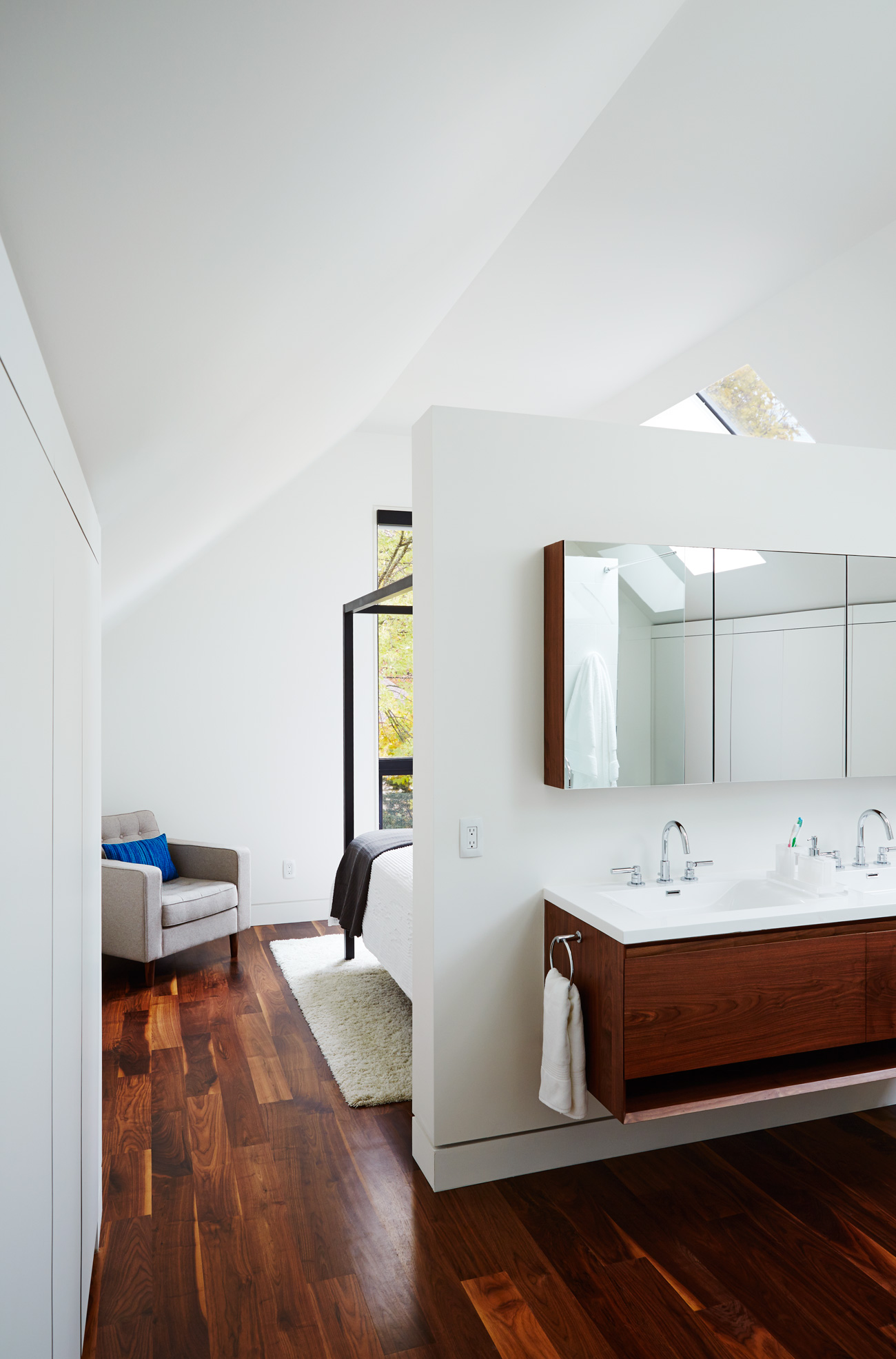 Some buildings reveal themselves at first glance, while others hold on to their secrets a little while longer. Joe and Sarah Knight’s Tudor Revival house in Etobicoke falls into the latter camp. With its original 1940s brick base, peaked roof and manicured garden, it appears to fit right in with its neighbours – frankly, it doesn’t really look like the home of confirmed modernists (co-principals of blackLAB Architects, Joe is an architect, and Sarah is the firm’s manager). But little details – micro-thin window casings and wider Tudor slats – hint that something more is going on beyond the facade. And sure enough, a trip to the backyard reveals a different ethos in the form of a boxy two-storey addition rendered in black and white. 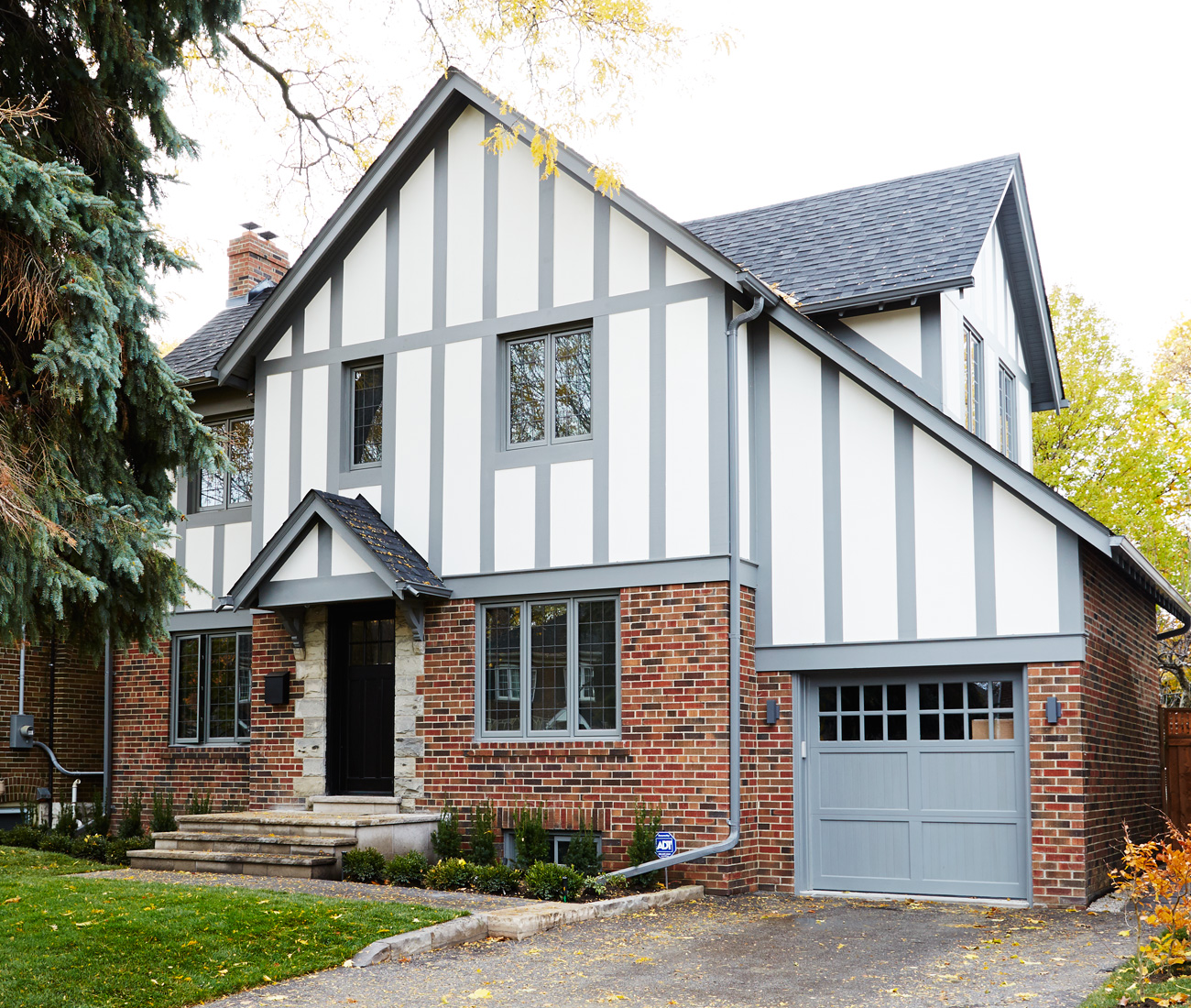 The couple, who has three young children, talked through potential designs after moving into the house in 2008, but their ideas weren’t completely aligned. Sarah was adamant that the facade remain traditional; Joe wanted to use cutting-edge materials. She wanted pops of colour; he wanted to keep things as spare as possible. “I don’t know if we ever met halfway. I would say he could get his way, or I would get mine,” she says. But then Joe figured out how they could both get what they wanted – without having to compromise. The outside would retain its traditional, classic lines, and his modernizing impulses could be given free rein in the separate structure out back. “We did have very specific ideas about what we wanted to do and a very specific way of executing those ideas,” he says.

The two-storey addition is unapologetically contemporary. Clad in black Anthracite zinc, it is a bold shadow with a massive 5.3-metre-wide Tiltco lift-and-slide door and a graphic swath of white fibreC concrete panels. By tucking the new structure under the front roofline, all these modern touches have been hidden from the street. To facilitate this sleight of hand and to make sure the rooflines aligned, Joe raised the roof of the original house by about a metre. Thanks to a broad glass door across the back, the combined dining, living and kitchen area is flooded with light. Although the L-shaped room is a grand space, the warm walnut millwork throughout makes it feel inviting.

Joe neatly resolved the dual identity of the house by creating a narrow courtyard between the original structure and the addition. The peekaboo effect is enchanting: a patch of gravel and a row of serviceberry trees separate the old brick from the new zinc.

Upstairs, past the kids’ bedrooms and a bathroom, the master suite is a luxurious parental retreat. The front of the room has been given the spa treatment with his-and-her closets, a double vanity in walnut, a stone-tiled walk-in shower, and a gorgeous soaker tub. A partial wall hides the sleeping area at the back; the cathedral ceiling and multiple skylights make the space feel much larger than it is.

The house is a bit of a calling card for blackLAB – clients are brought by occasionally – but most important, it’s a home that works for the Knights. “You have to be a bit selfish about what you want in a house,” Joe says. Sarah echoes that thought, “I just don’t think we were willing to compromise.”

Originally published in our Spring 2016 issue as “Modern Transitions”.