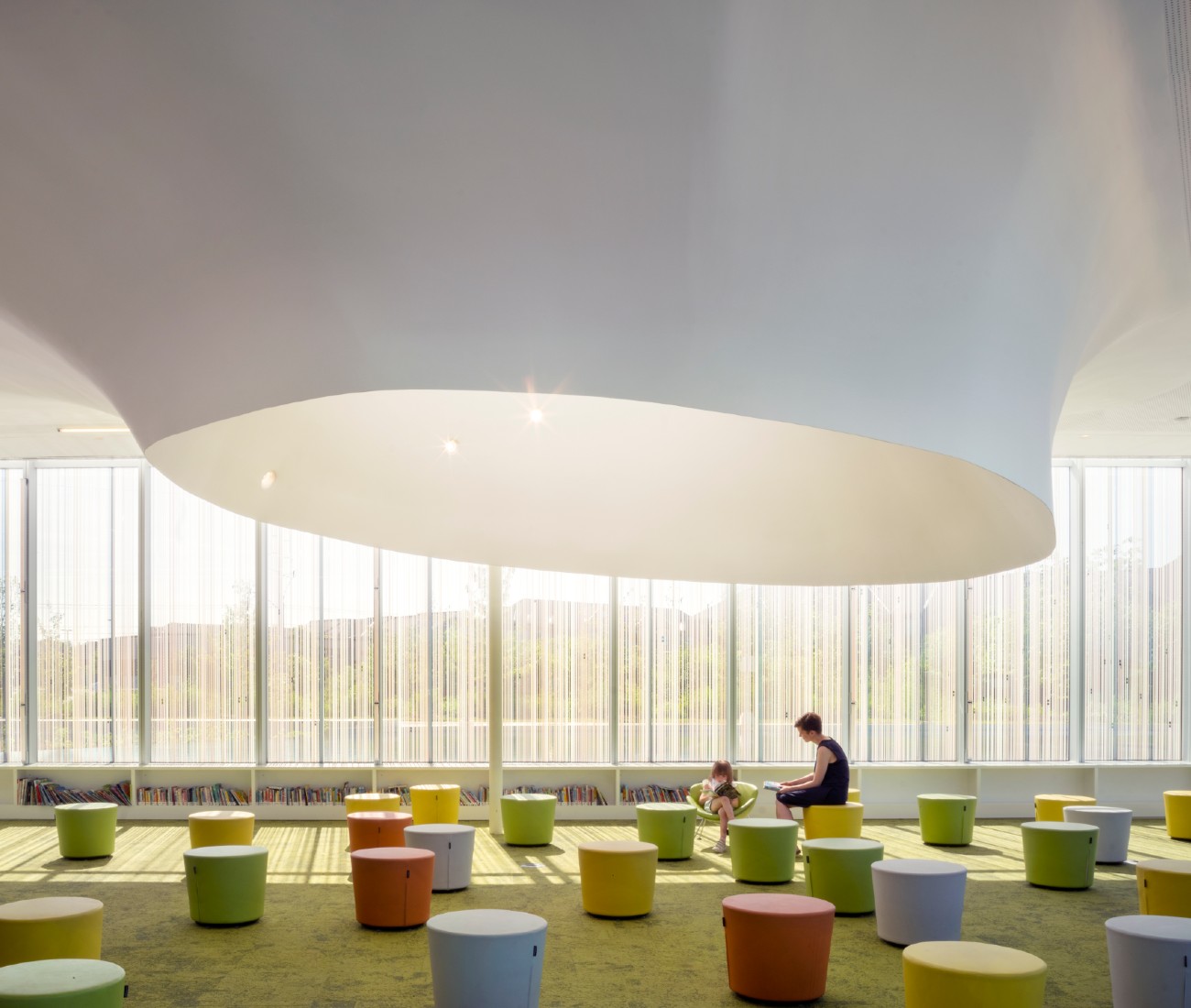 Northwest of Toronto, Brampton is one of the fastest-growing communities in one of the fastest-growing regions in North America. Boasting a population of over 600,000, the city is a hub of global immigration where over 115 languages are spoken, epitomizing radical diversity every bit as fully as the neighbouring metropolis. But for all its evolving dynamism, the urban landscape of strip malls, parking lots and cul de sacs remains that of a generic automobile suburb – with notable exceptions.

On the east side of Bramalea Road, the angular interplay of glass and greenery signals one such exception: the Springdale Library. Designed by Toronto’s RDH Architects, the new branch introduces an inclusive gathering space for the community, combining a curated physical collection with a range of sociable programming that affirms the vitality of public libraries in the digital age. 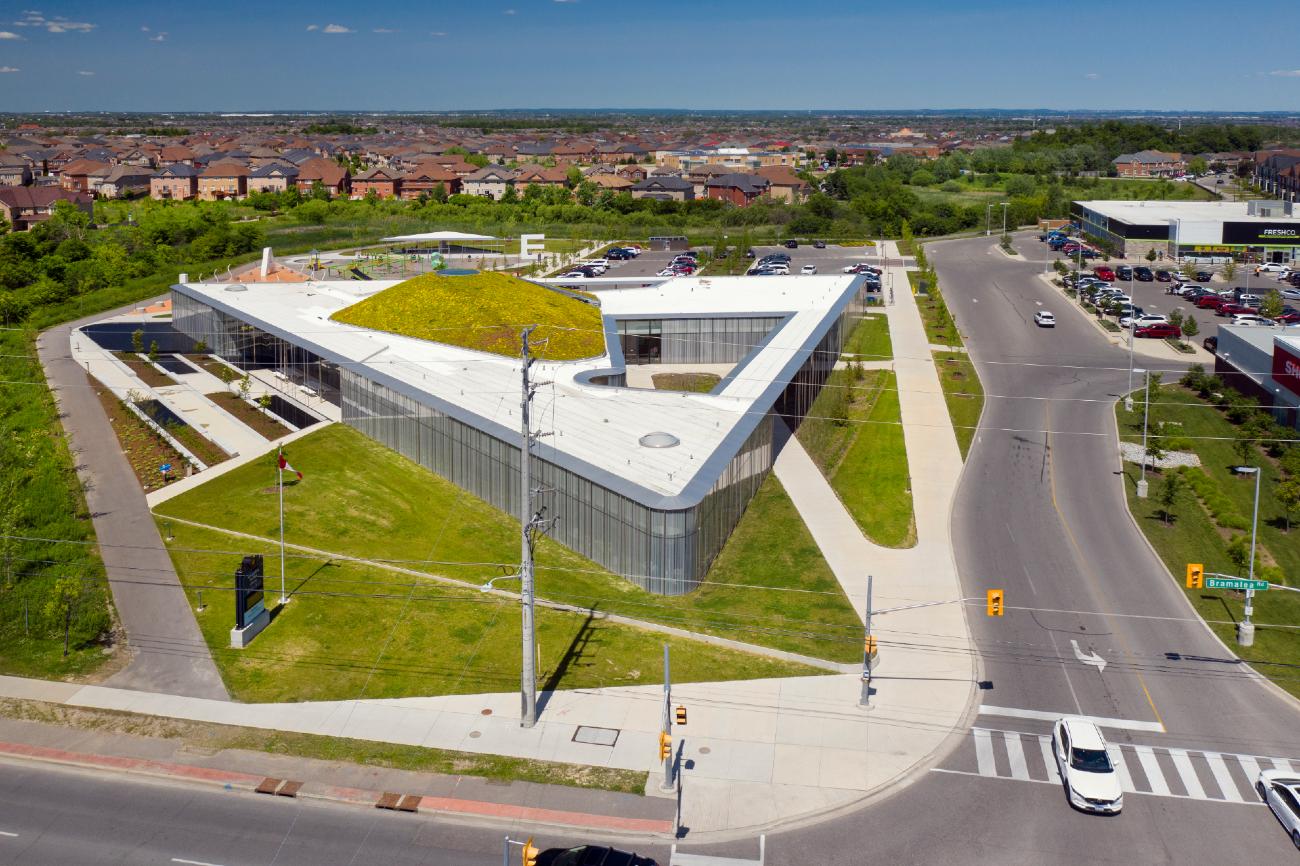 Emerging from a constructed landscape of rolling grass, a sleekly pared down facade of glass and steel is topped by a pristine green mound that emerges from within the building like some earthen pyramid. It all meets the eye with a curious grace that – at the very least – beckons the exploration of what’s behind that shimmering glass curtain. 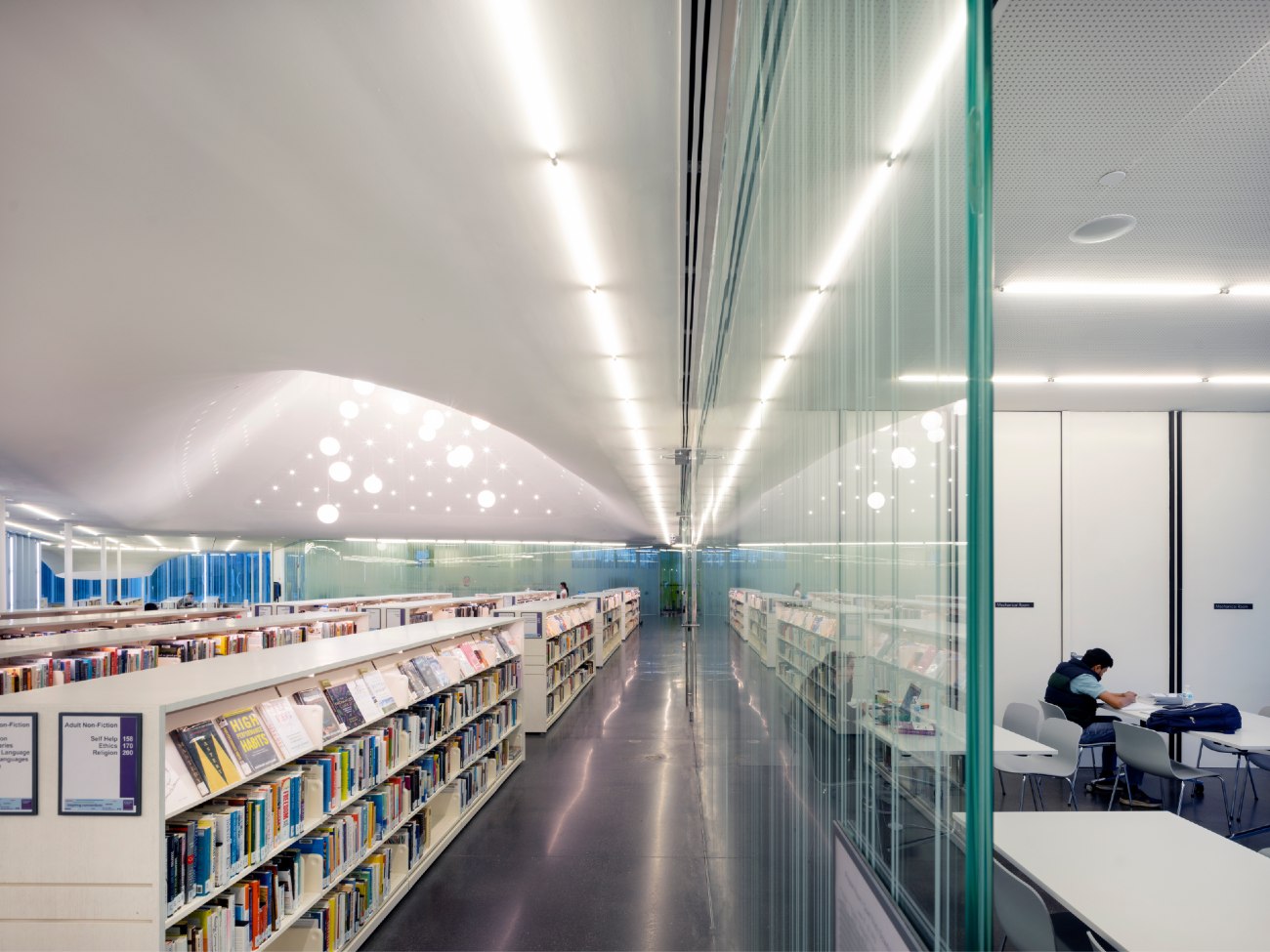 It’s a lot more than books. Alongside a collection of printed and digital works in a multitude of languages, the 2,400-square-metre Springdale Library features an expansive multi-purpose room that hosts meetings, exhibitions and public gatherings, along with a well-equipped community maker space complete with 3D printing. 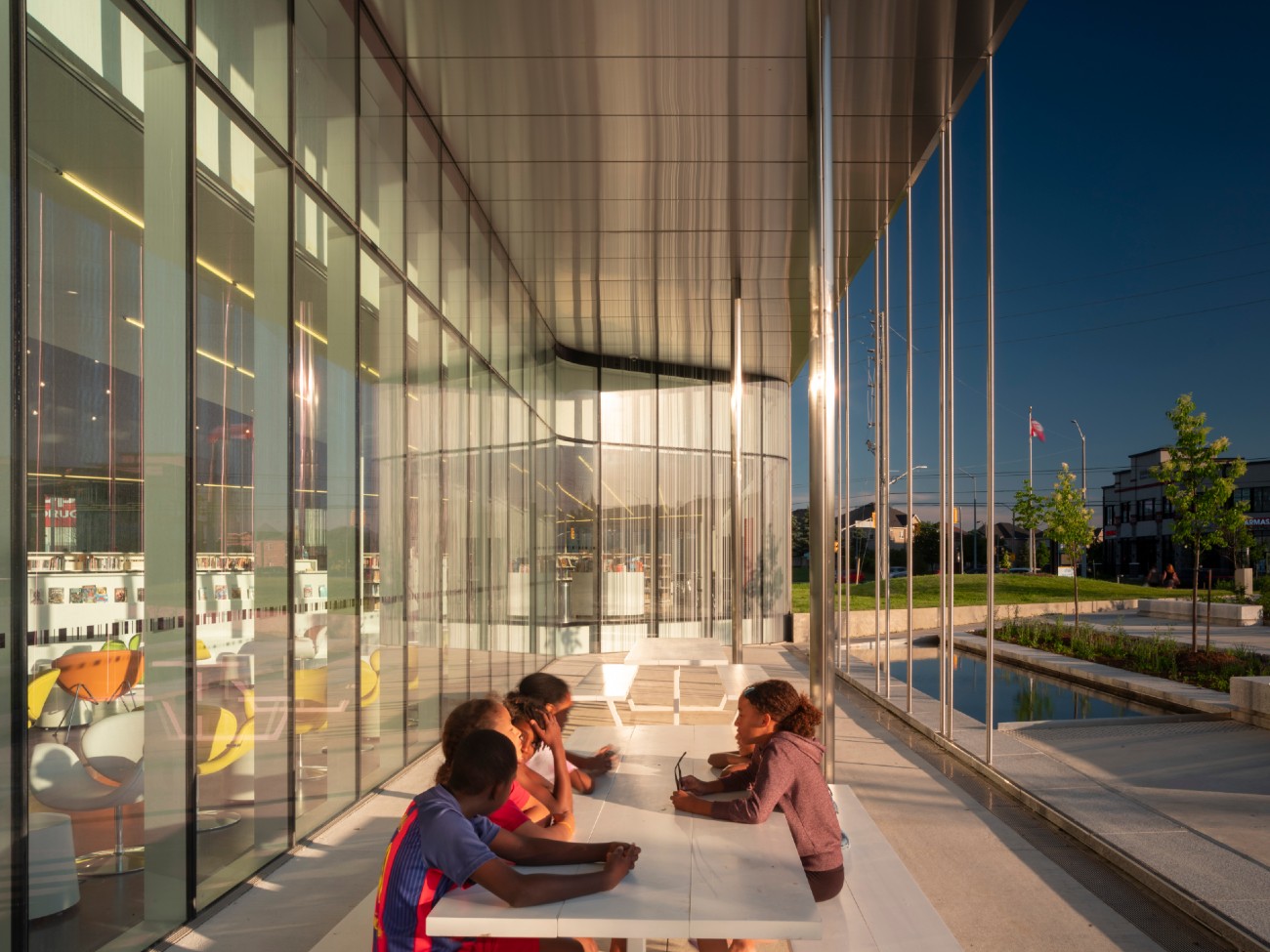 The whole of it is flexibly designed, prioritizing quality of space over rigid programming. It starts outside. Addressing the sidewalk with an assertive, urban presence – the parking lot is tucked behind the building and away from the street – the library reads as a striking triangular form, with the effect achieved by extending the roofline to frame the contours of a tranquil inner courtyard. 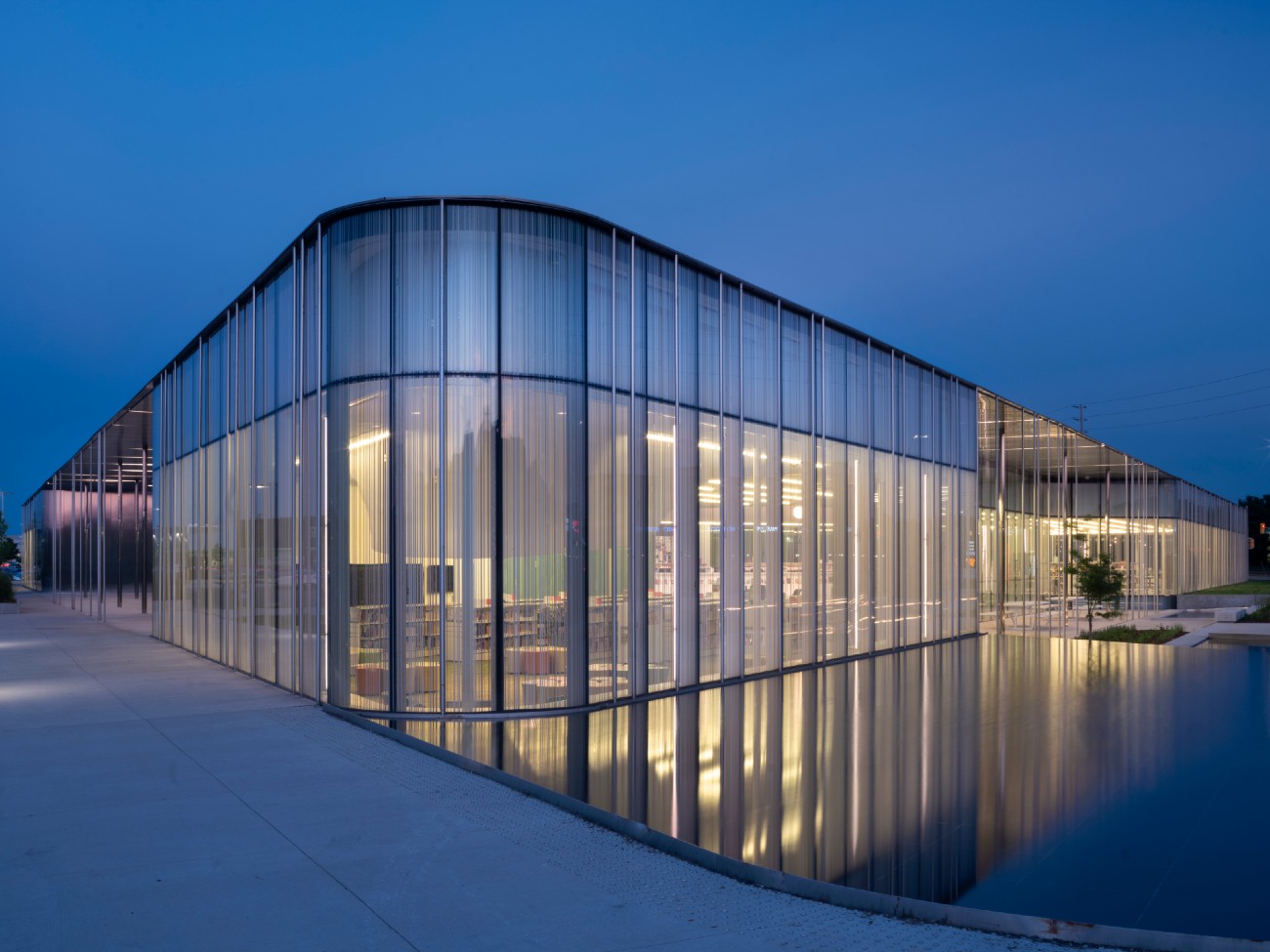 Featuring ample seating and greenery along with elegant covered walkways and a soothing water feature, the sheltered courtyards foster the ambiance of an outdoor room. It’s the type of environment that’s rare in car-oriented communities; a place that offers the opportunity to linger and enjoy the outdoors in between leaving the car and entering a building. 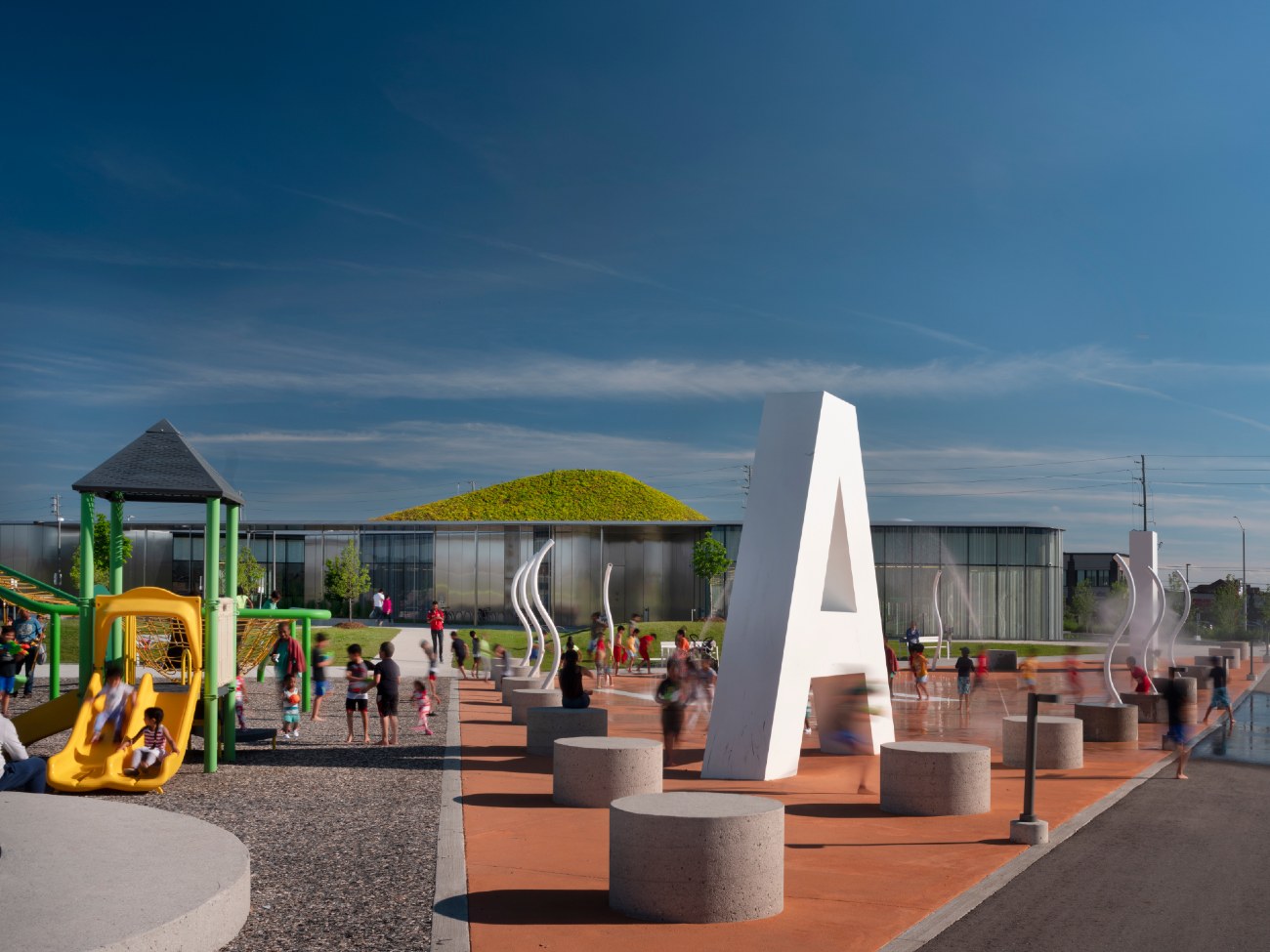 With a dynamic new playground built alongside the Springdale Library, the careful positioning of outdoors spaces also allows the more adult-oriented courtyard to overlook the children at play, facilitating comfortable and sociable supervision for parents and caretakers. Meanwhile, the whimsical playground is scattered with a series of capital letters that together spell the word “IMAGINE.” As befits the sentiment, it is an energetic and unencumbered space. 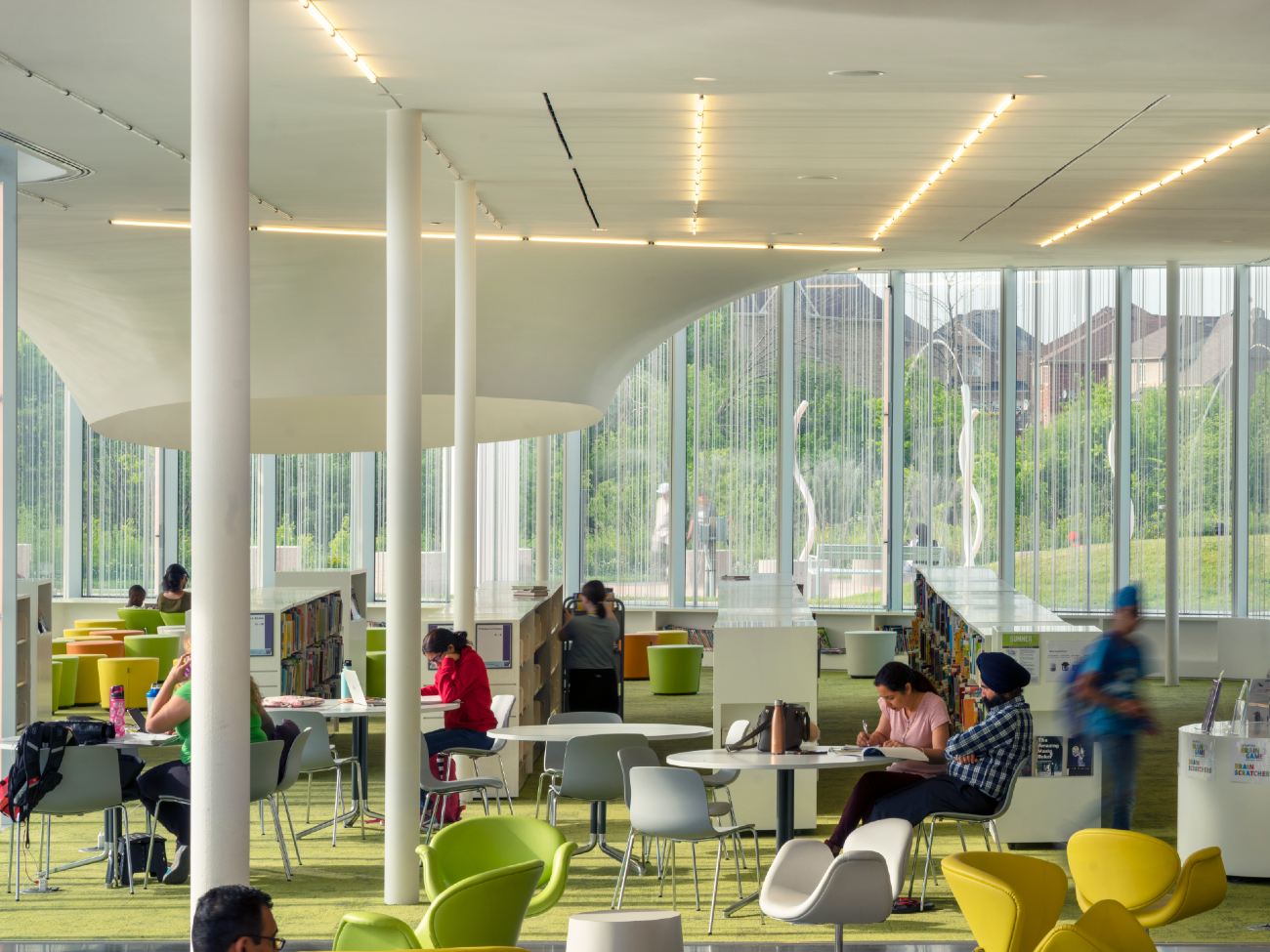 But the real magic happens inside. While the fritted curtainwall opens up a pleasantly sunlit interior, the integration of skylights and a sinuously curved ceiling brings a sense of clarity, definition and poetic beauty to the spaces below. “It’s a fluid, organic architecture,” says RDHA’s Tyler Sharp, “where the ceiling creates different types of experiences below.” 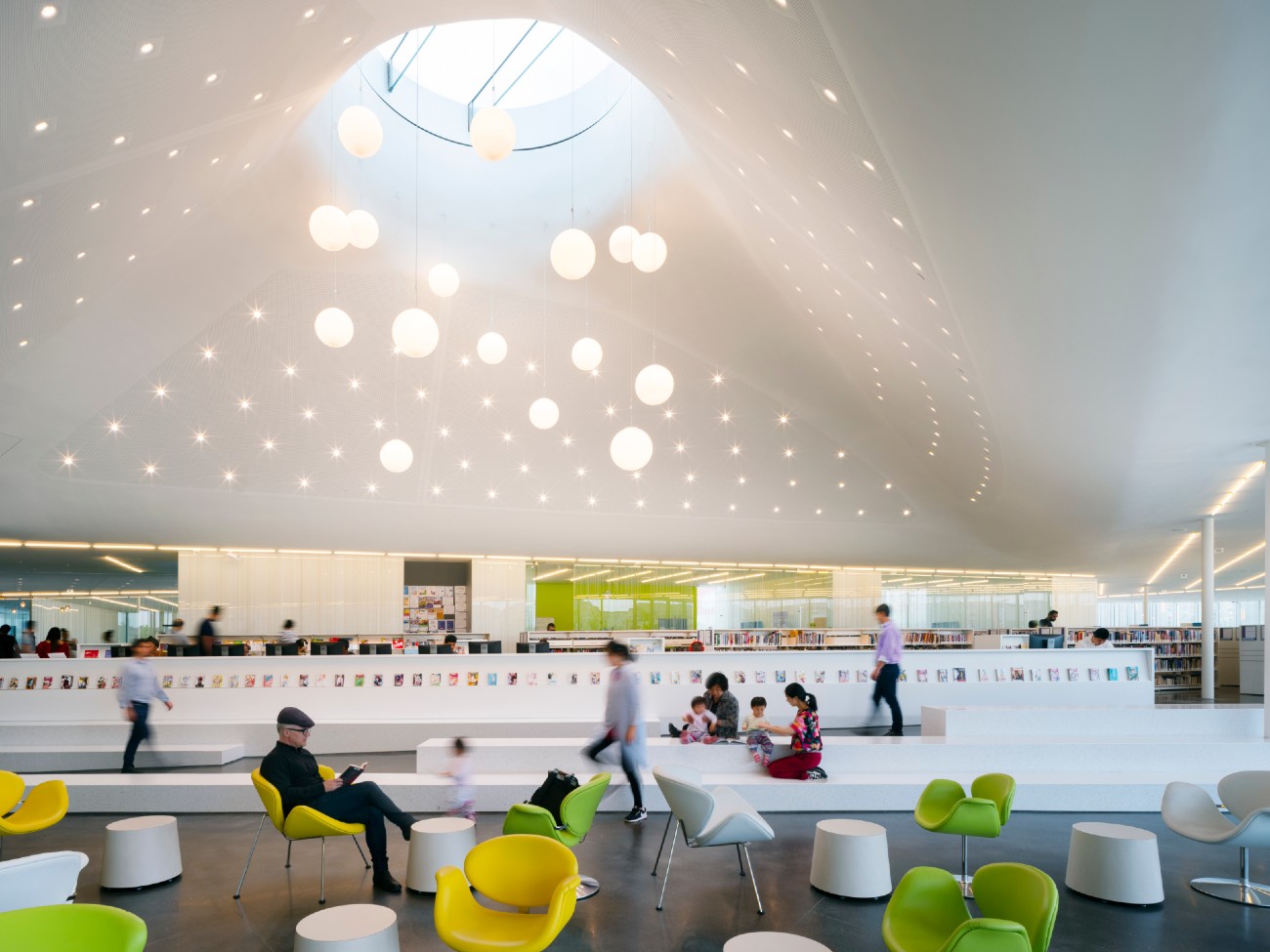 It all culminates in the central oculus, an elevated skylight at the heart of the building. (There goes the mystery of the earthen pyramid.) “It fills the room with light,” says Sharp, “and it also’s a place where people are intuitively drawn to gather.” Suspended from the gracefully curved ceiling, a series of ball pendant lights hang in a static, planetary ballet.

The inverse gesture is used to similarly powerful effect in the children’s reading room, where the skylight is extruded from above. “Here, we wanted to create a smaller, more intimate scale, where kids feel like they can almost touch the sky above,” Sharp explains. For little ones, it conveys a sense of wonder – at a human scale.

This feature was originally posted on azuremagazine.com.