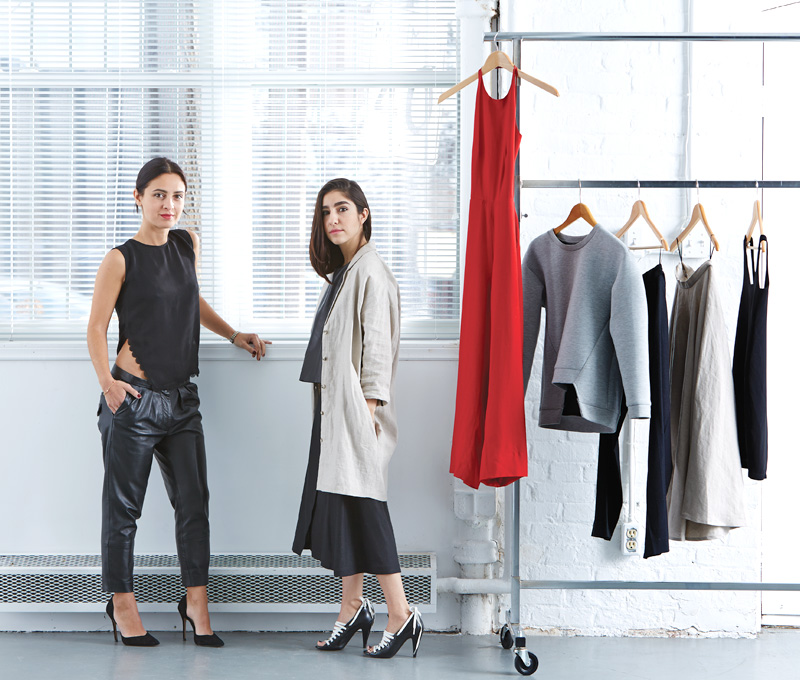 When we set out to photograph Tania Martins and Mona Koochek, our goal was to capture the essence of their womenswear: a mash-up of old-world romance and modern silhouettes. Sure enough, the designers behind Markoo showed up to the shoot personifying their label to the nines. Martins chose ankle-baring leather trousers, with a pleated front and drop crotch, which she paired with a loose-fitting viscose tank. Though the top has a conservative neckline, side slits lined with scalloped Japanese lace offer a glimpse of skin. Koochek donned a fitted leather crop top over a circle skirt made of swishy raw silk. Her oversized linen dinner jacket with three-quarter sleeves and jetted pockets is a casual addition. Both outfits are laid back and pretty, but also embrace a surprising blend of biker chic and solemnity. It’s unusual, and it works.

Markoo represents an amalgam of their last names and their styles: Martins’ feminine and sexy aesthetic and Koochek’s self-described boyish-boxy tendencies. The women have distinct personalities, but they wholeheartedly agree on leather. Martins loves how it feels to cut, sew and wear; Koochek appreciates its durability. “Leather is badass,” Koochek says. But mixed in with the rock ’n’ roll taperings are ruffles and slip-like skirts, a feminine touch with an unlikely inspiration: the 2000 film Malèna, starring Monica Bellucci. The movie prompted Markoo to delve into ’40s Sicily – when all materials, including textiles, were rationed and women proved their mettle in the workforce. Defiantly feminine, these wartime women made the most of the fabric restrictions: skirt lengths rose, suits became slimmer and separates transitioned into evening wear. War set women’s fashion on a divergent path to meet modern times, and it did so with elegant results.

Now in its second season, Markoo is rooted in mix-and-match basics in black, white and nude, with a few pops of red “like a touch of lipstick,” says Martins. And each ready-to-wear garment is named after a friend or influential woman the designers have encountered, a nod to those doing battle of one kind or another here in Toronto. markoostudios.com

Originally published in our Spring 2014 issue.