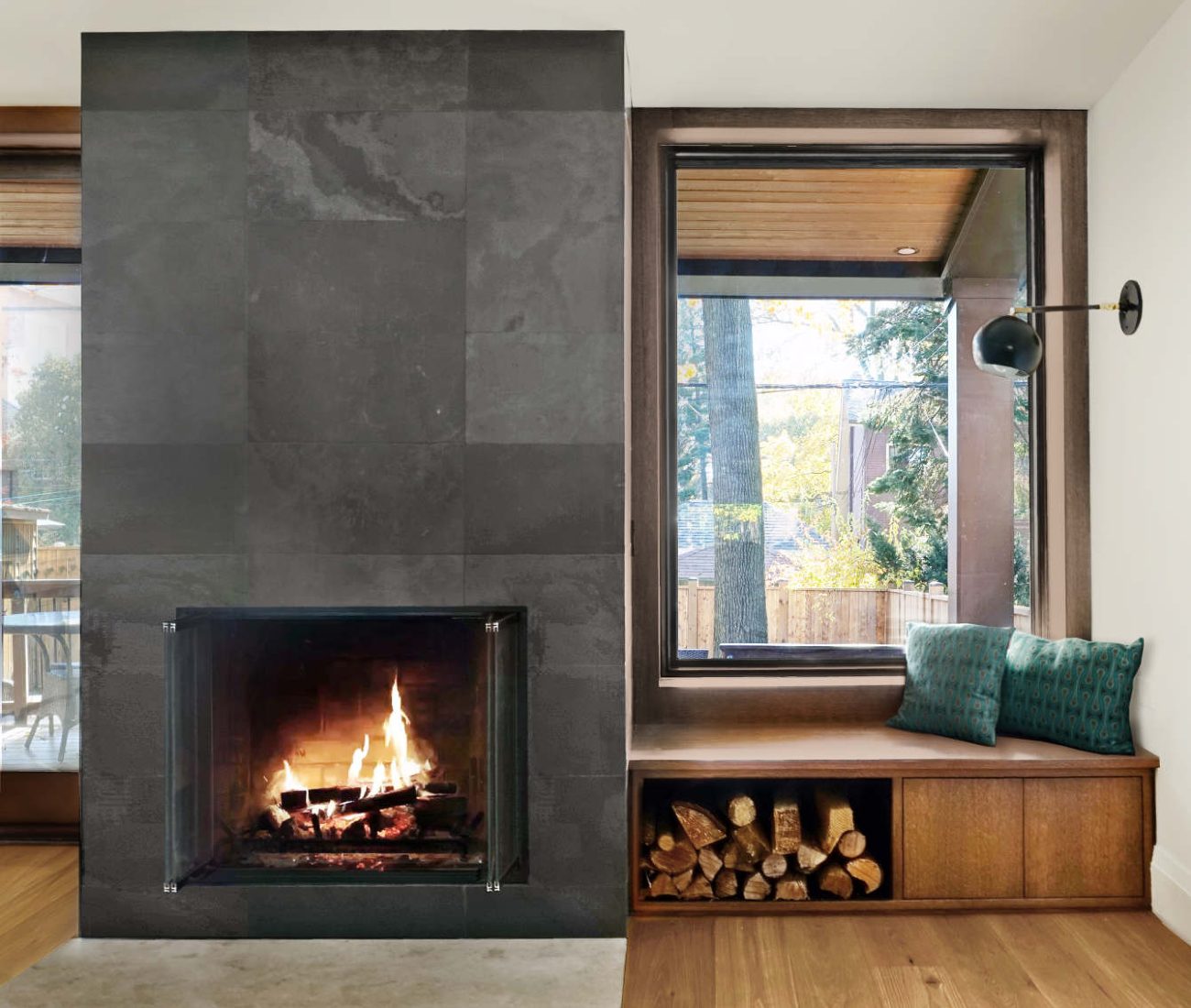 White oak flooring from Stone Tile is used throughout the home. The millwork, by Harvest House Craftsmen, is fabricated out of white oak, as well. The fireplace, enclosed in a slate-clad treatment, is by Heatilator, 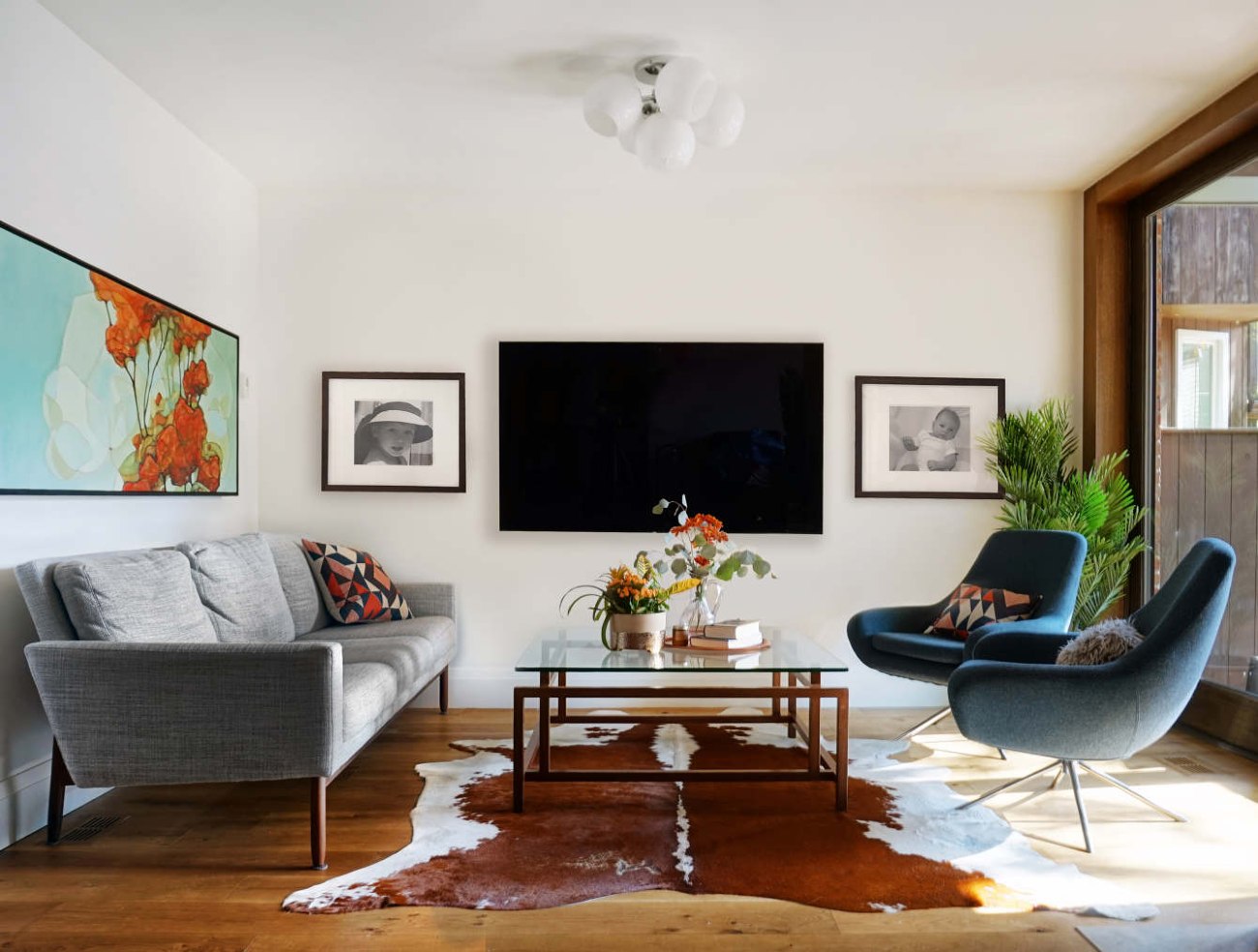 The living room contains a pair of distinct seating areas. The sofa is from DWR's Raleigh collection; the swivel chairs are by Noomi. 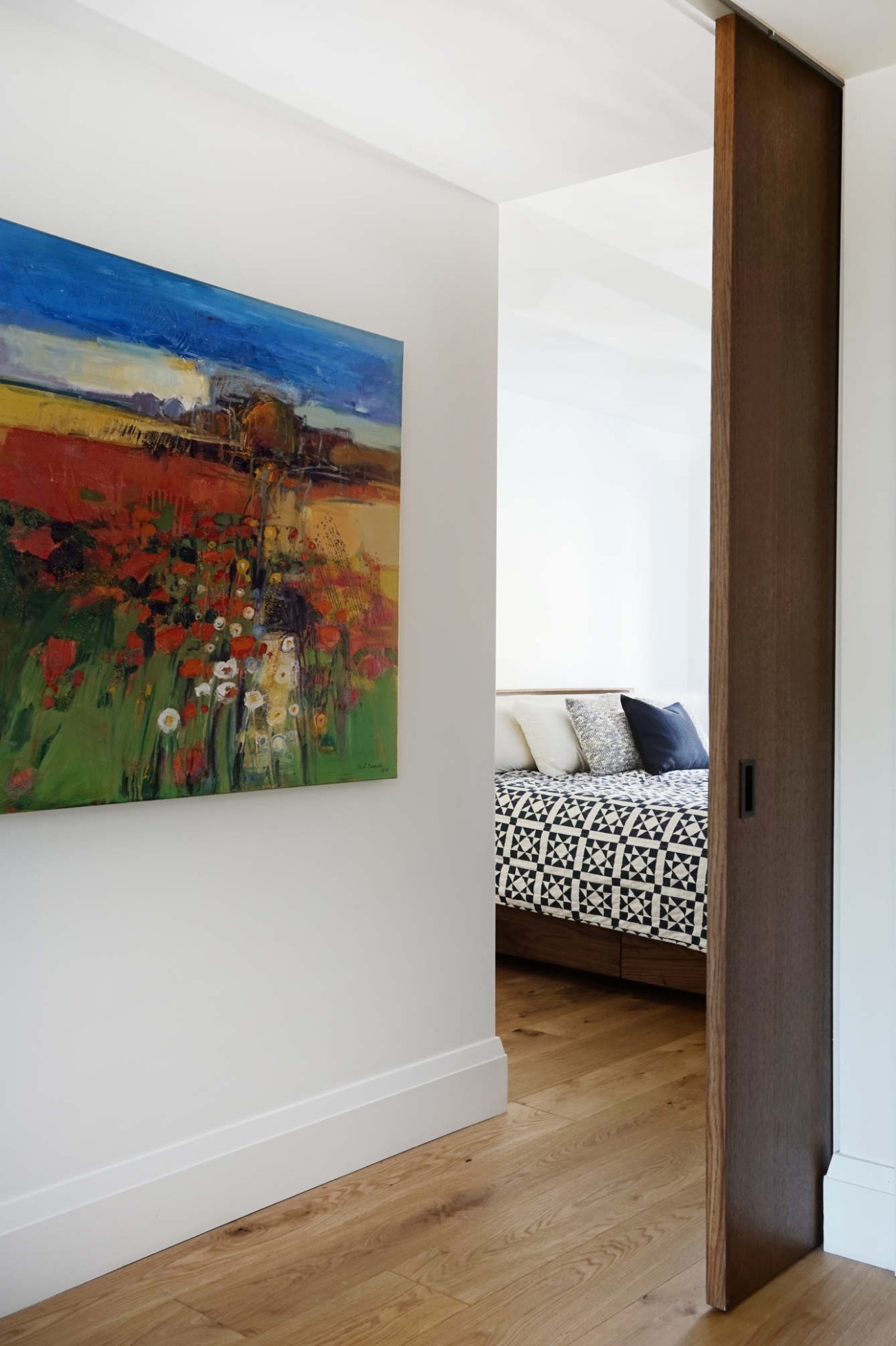 Upstairs, a vestibule to the master bed and bath sits adjacent to the central hallway, and can be closed off with a walnut sliding door. 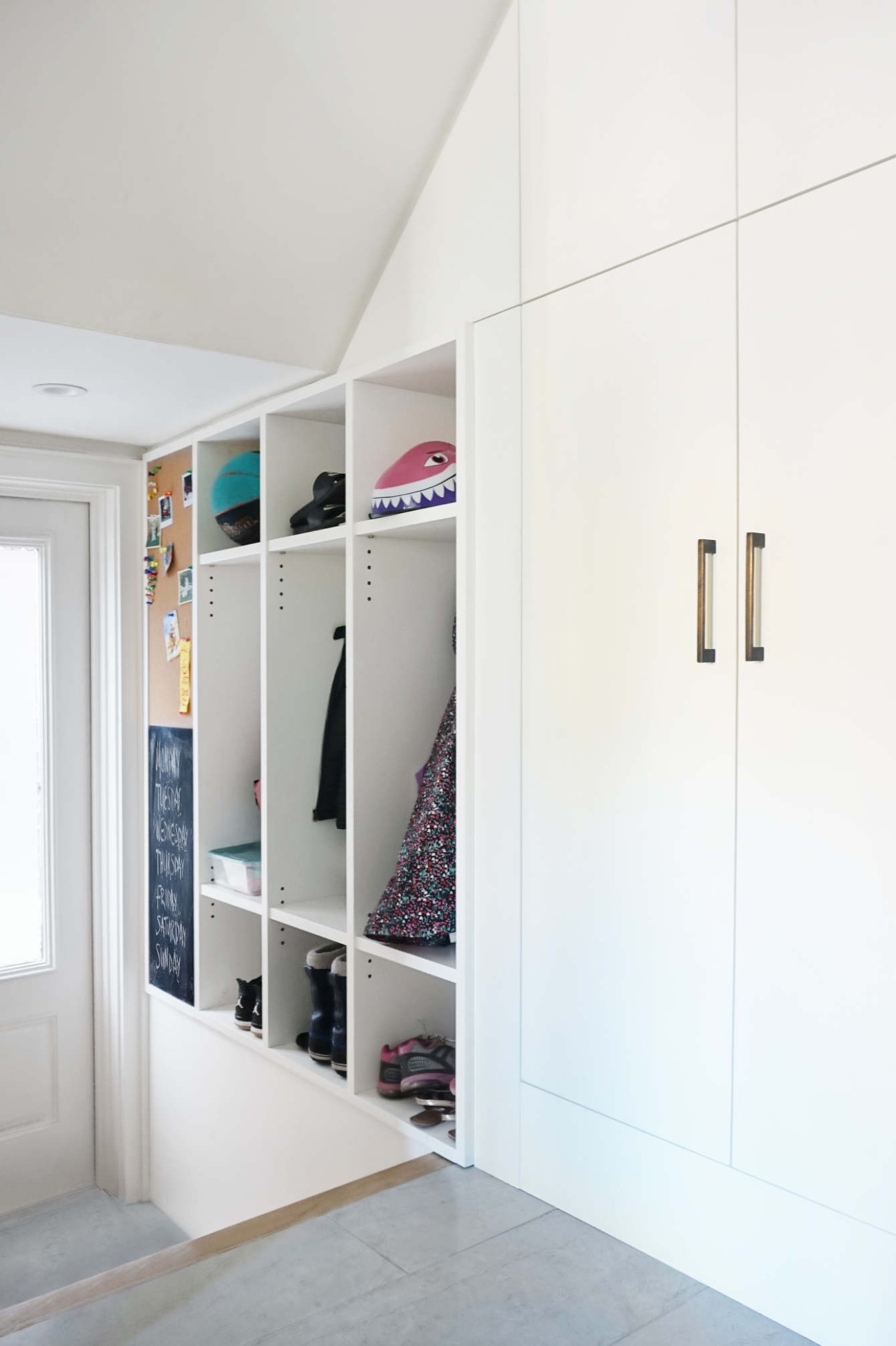 A well-trafficked side entrance features cubbies for each of the children, keeping the front entrance clutter-free and providing ample space for jackets, shoes and other outdoor necessities. 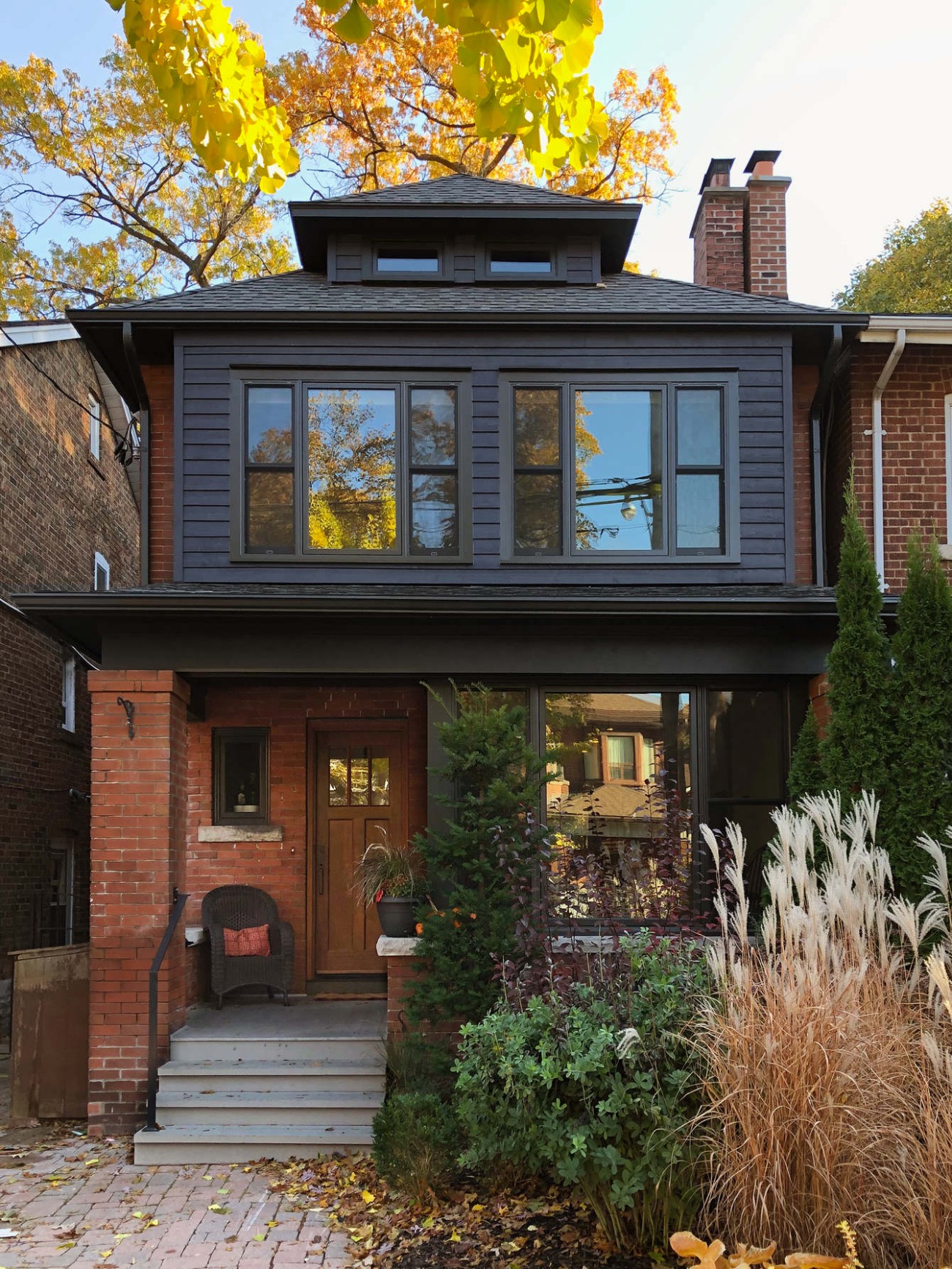 By opting for a series of smaller additions, the foursquare home's modern accents still fit in with the neighbourhood aesthetic, respecting the streetscape while meeting the family's requirements.
Share Tweet Pin Email Print

This Bloor West reno proves that there’s wisdom in restraint

When CAB Architects was commissioned to renovate a Bloor West foursquare for a family of five, the initial plan was to transform the attic into an entirely new storey. The reasoning was simple: the two parents and three growing kids needed enough space to spread out. But as they continued to discuss the project, the couple began thinking toward their empty-nest future – and the long-term utility of a third floor. Would anyone bother making the ascent once the kids were out of the house?

Good question, concedes CAB co-founder Brian Hagood. “When we started getting into it,” he says, “we quickly realized we were generating way more space than we needed.” And so bigger, they collectively decided, wasn’t better. CAB then pitched an alternative: in lieu of a massive addition up top, they’d build a trio of smaller ones. One, on the ground floor, would partially infill the large front porch. Another on the second floor would add just over half a metre onto the front, while a larger rear addition would extend the second storey back and shelter the patio. CAB’s modest adjustments wouldn’t just add space; they’d make the existing space more efficient by adding to it in increments.

Upstairs, the front and rear additions added vital square meterage onto each of the bedrooms while expanding the central hallway, now brightened by a skylight. Past a sliding walnut door, a vestibule just off of the hallway now branches off into the master bedroom and gorgeous new master bath – also treated to a skylight – creating an ensuite in the home if – well, when – the parents need some time apart from the kids.

The change was more dramatic on the first floor, though. Shifting the dining room into the infilled porch made enough space to push the kitchen into the middle of the floor plate. The living room, now greatly expanded, has two distinct seating areas and enough space for the entire family to congregate. The rear wall, now free of kitchen cabinets, has been given over to wood-burning fireplace, as well as a large glass sliding door, taking advantage of the southern exposure and providing ample natural light through the entire space, while also transforming the sheltered back patio into an extension of the interior. Despite being gutted, the renovated home feels more like it’s been neatly tailored and able to adjust to the family’s shifting needs. CABARCHITECTS.CA