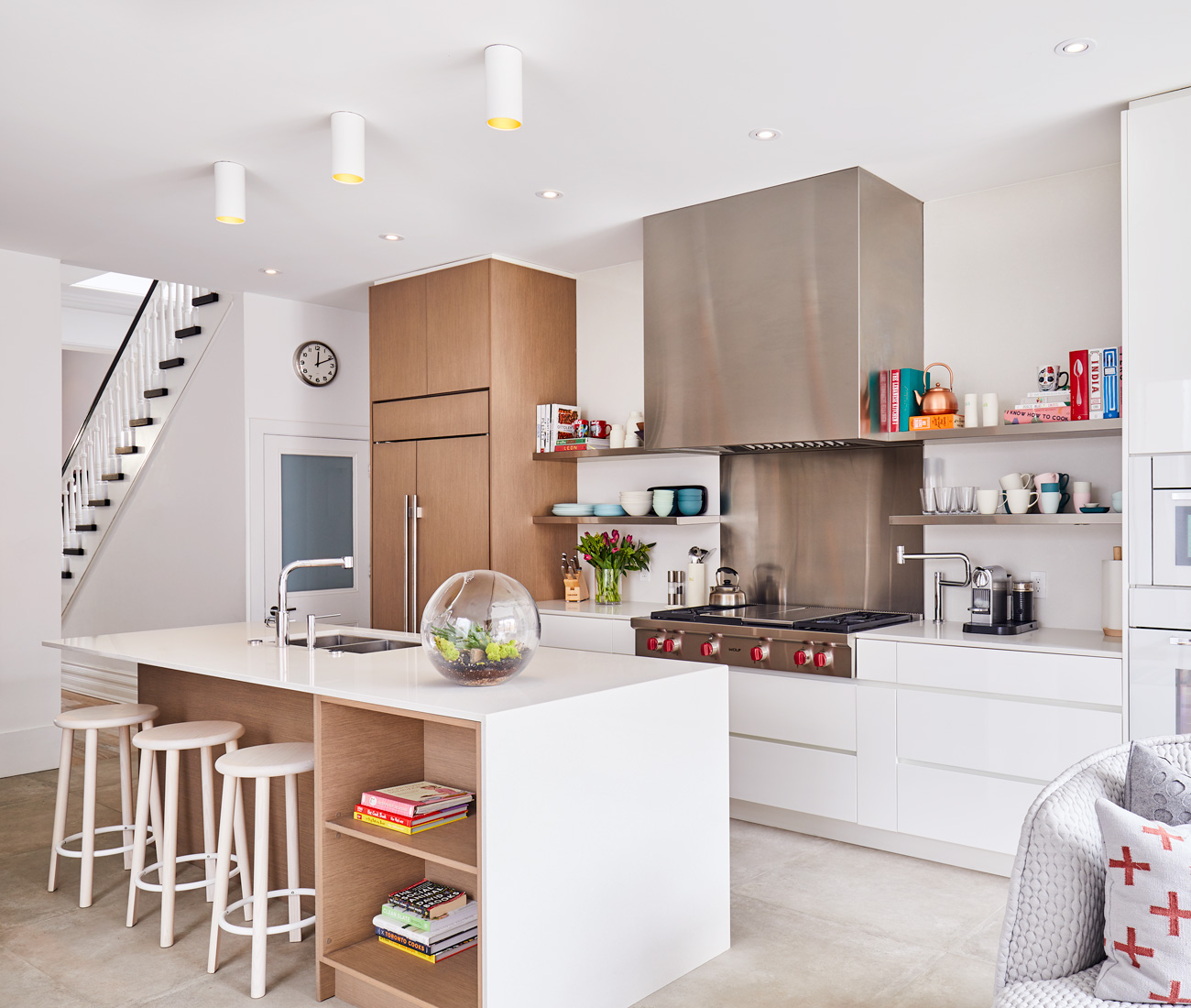 Formerly a series of small rooms, the now open-concept kitchen and family room features a system by Bellini Custom Cabinetry with a Caesarstone-clad island, Wolf appliances, heated concrete tiles from Stone Tile and stools by Herman Miller. Sofa from Klaus. 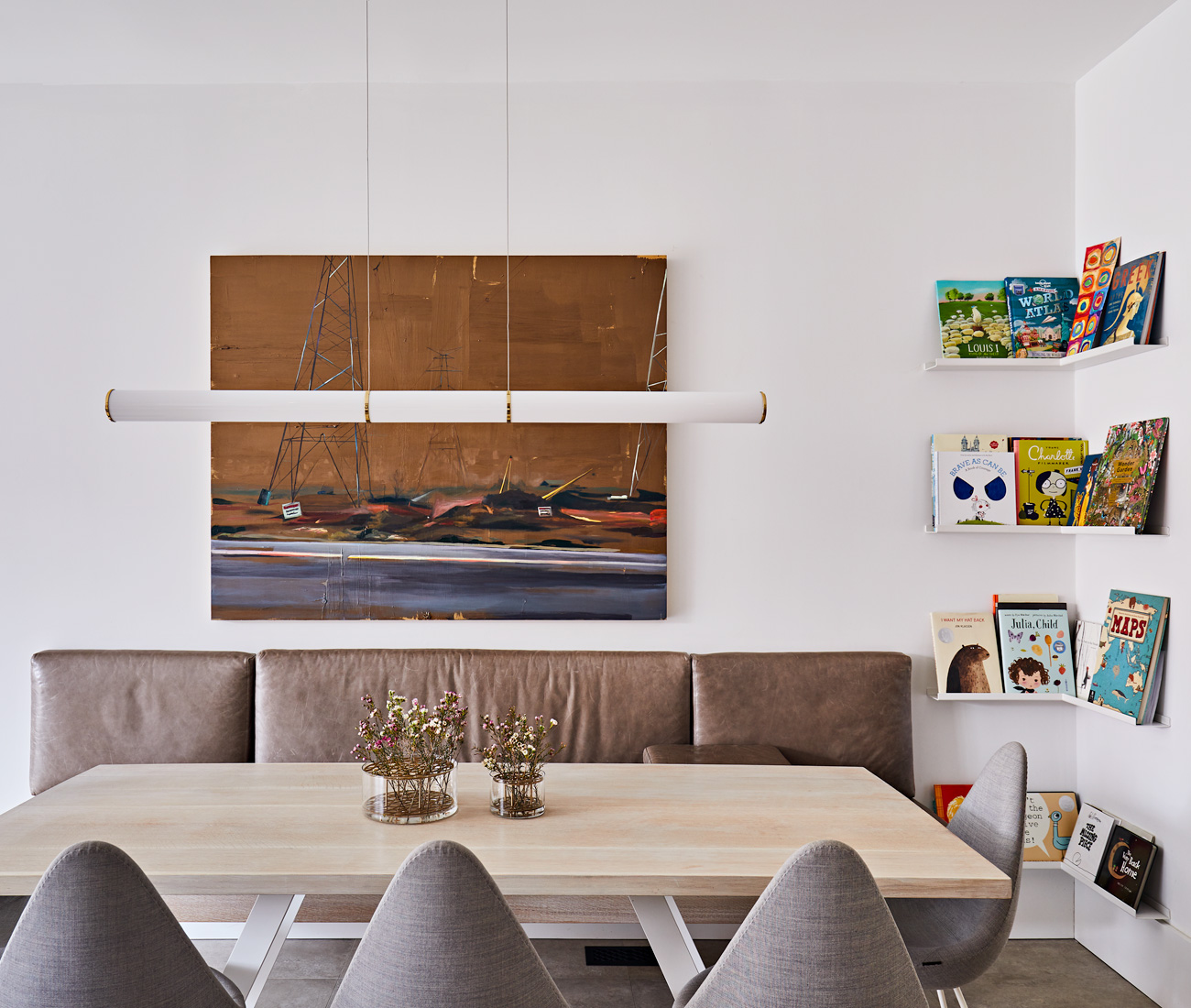 Above the custom-designed dining table with leather banquette hangs a Roll & Hill pendant from LightForm and art by Val Sears. Arne Jacobsen chairs from Torp Inc. 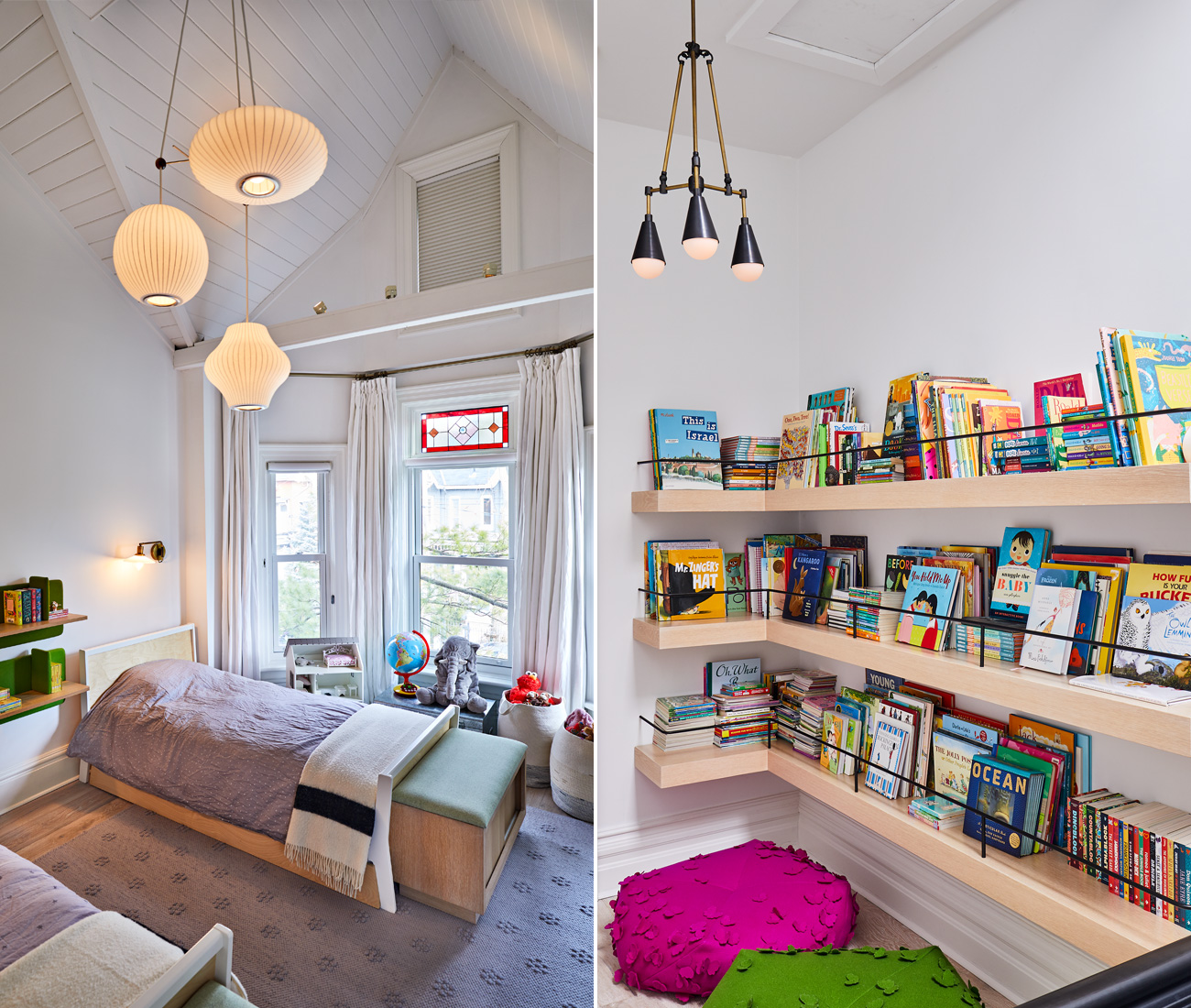 Left: The original cathedral ceiling and stained glass windows are the main attractions in this kids’ bedroom. Bedside shelves by Alki; Nelson pendants from LightForm. Right: A Type Books–curated library bookends the upper hallway. Flooring throughout by Stone Tile; pendant by Apparatus from Hollace Cluny. 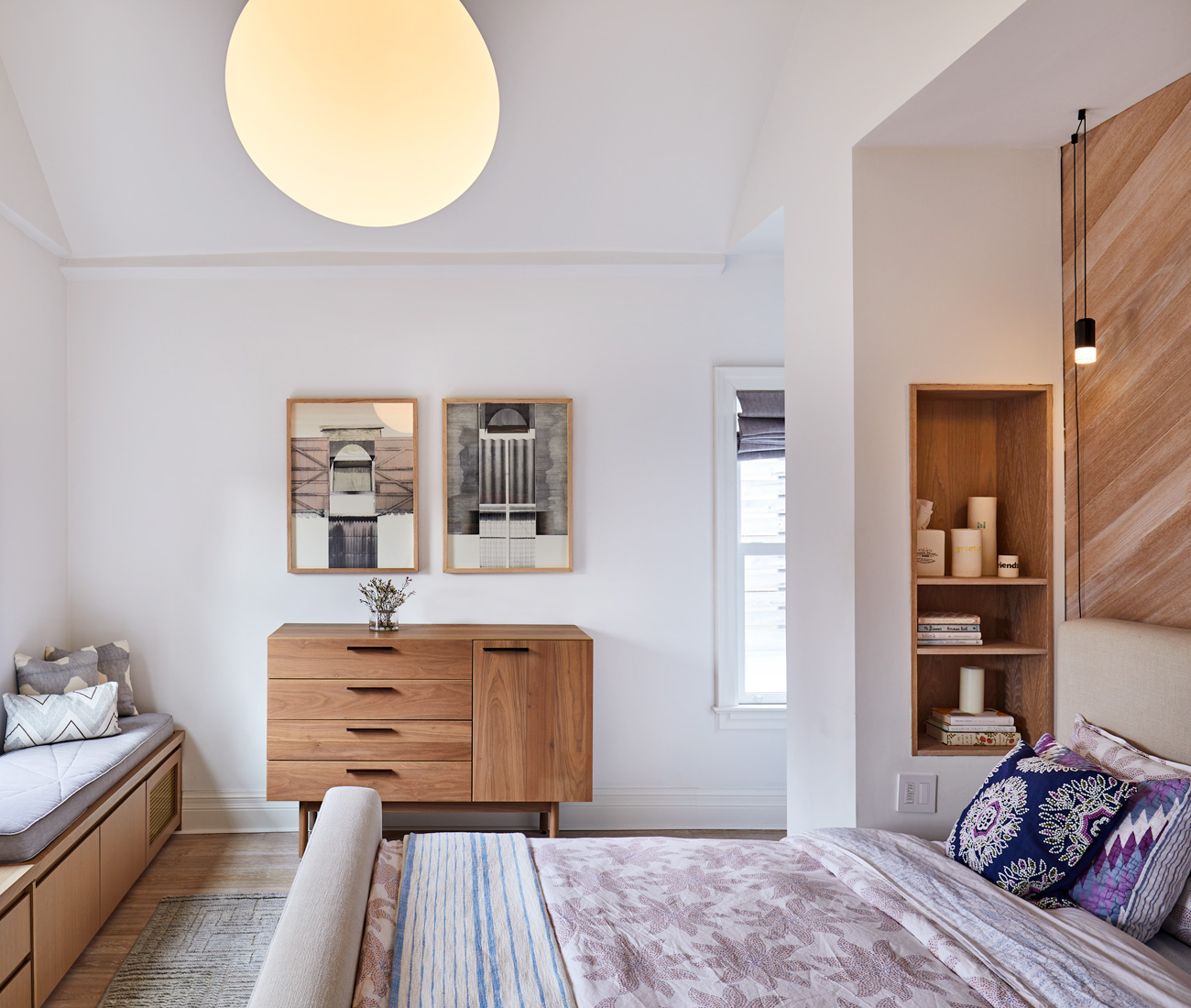 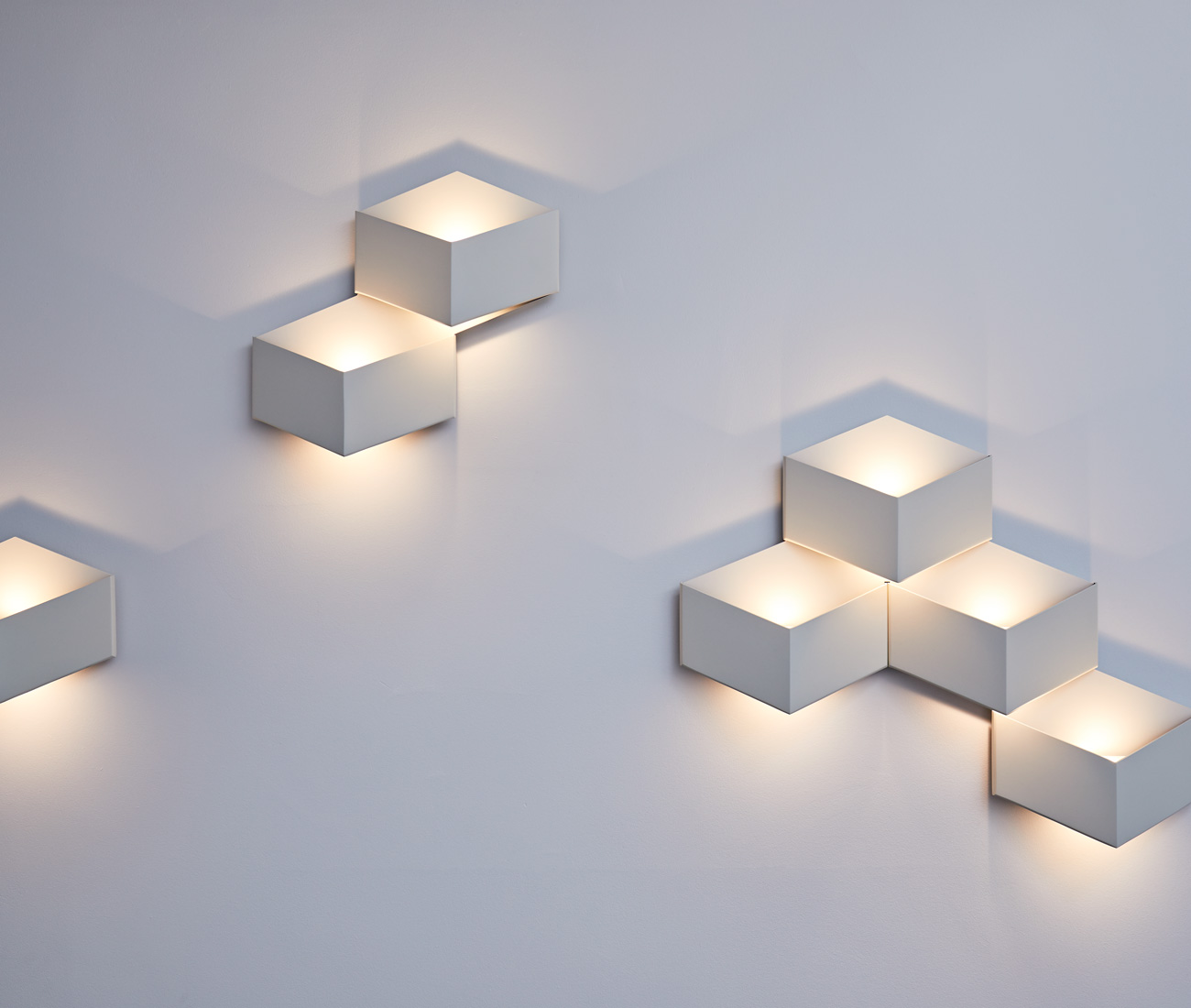 Lighting the way to the master bedroom are these folded metal sconces by Arik Levy for Vibia from LightForm. 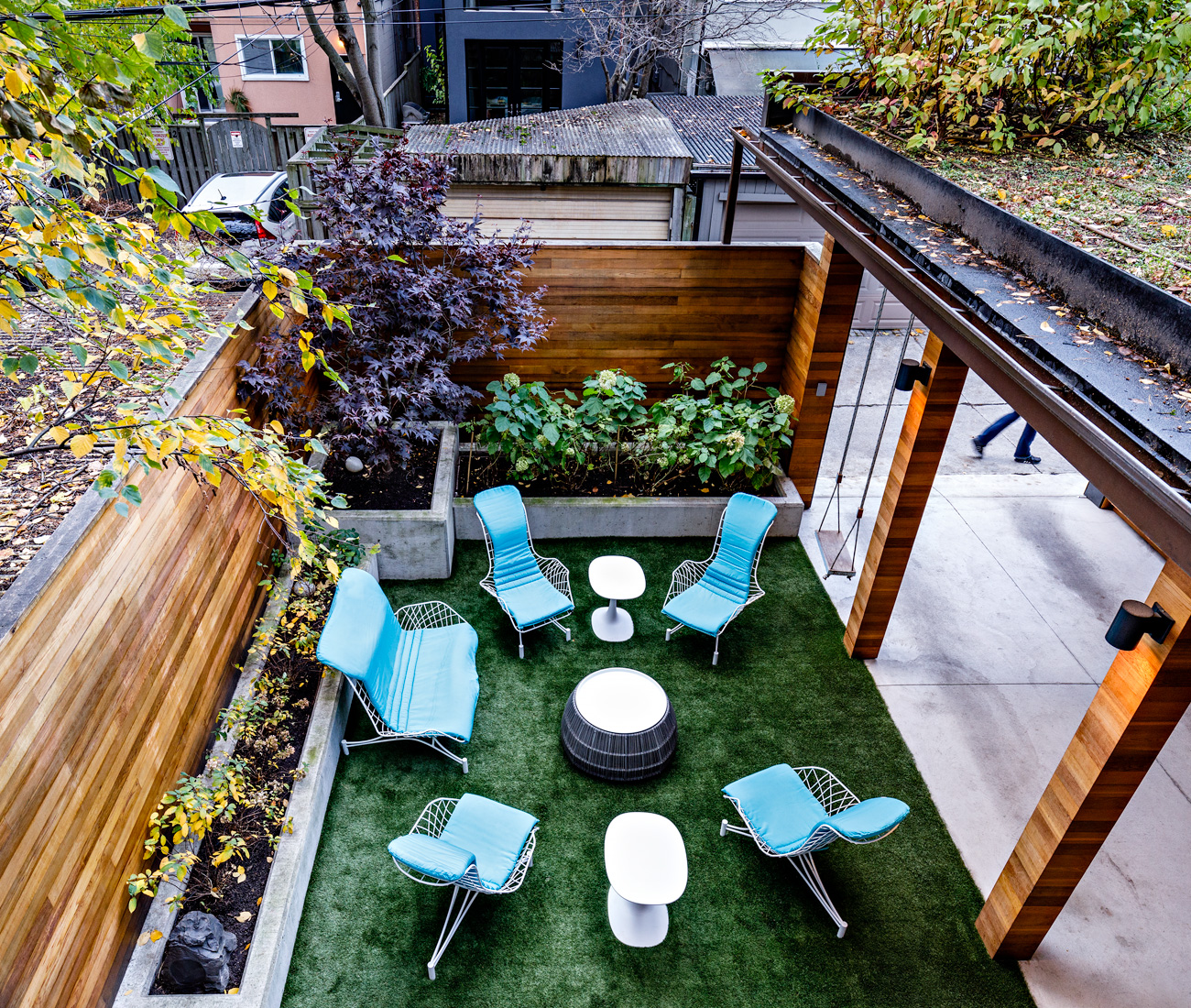 The master bedroom overlooks a planted rooftop and the west-facing backyard, where artificial turf and concrete planters make for the perfect, family-friendly urban retreat. Outdoor furniture by Oasiq. 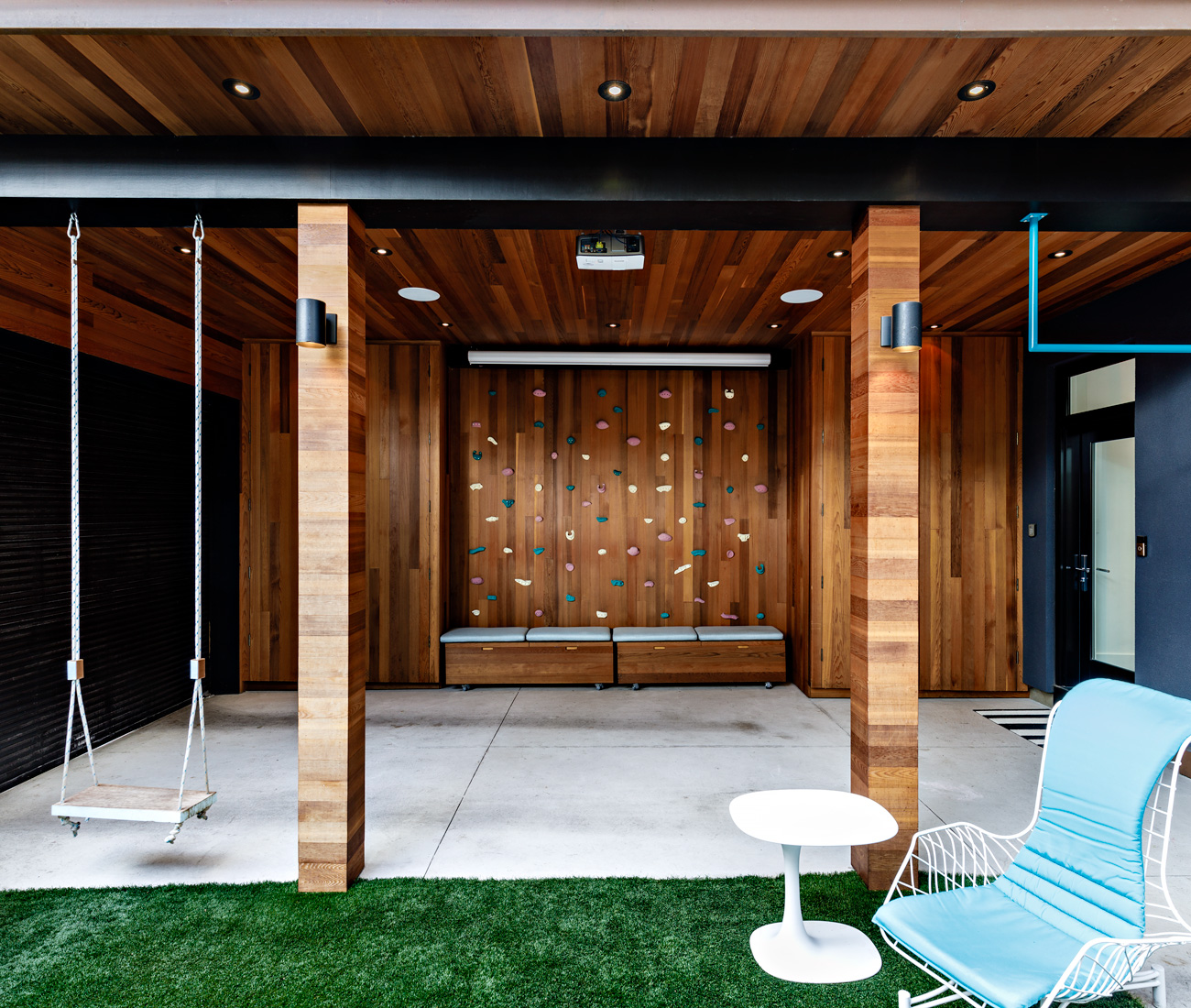 Sheltered by the cedar-clad carport is a climbing wall and, above this, a projection screen for backyard movie nights with friends.
Share Tweet Pin Email Print

It’s the modern homeowner’s dilemma: they want a quintessential Cabbagetown Victorian with quirky details and nooks to explore, but none of its drafts and dearth of closets. The best approach is to embellish the old bits, then blend them into a new look. Alison Milne Design recalibrated just such a house in Cabbagetown, and the result is a stunning study in customization.

The homeowners, who have three girls under the age of eight, wanted a light-hearted, colourful space to showcase their collection of Canadian artwork, all in a setting that retained its heritage context where it made sense. (In Milne, perhaps they found the perfect cohort, since she also happens to own an art gallery that focuses on Canadian talent.)

Traditional elements at the front of the 210-square-metre house are mostly original, but for some nips and tucks. A vestibule modernized with marble-and-oak cubbies signals the old/new motif. Further inside, a grand staircase is doused in black-and-white paint and warmed up by a Y&Co runner – that’s one CanCon moment. “We celebrated Canada in this house,” says Milne. “Seventy-five per cent of the products are from Canadian makers and artists.” Outside the girls’ room, there’s one of two curated libraries by Type Books with candy-bright cushions by local textile artist Bev Hisey tucked underneath the chunky white oak-and-metal shelves.

But Milne’s high point comes in the residence’s sumptuous, sun-splashed rear. Here, dramatic floor-to-ceiling windows frame the hardworking backyard, with room for a car and a kiddie rock-climbing gym that doubles as a projection screen for summer movies. Move indoors to the mudroom to peg a jacket on an elephant head against a wall of handmade tiles by Toronto’s Black Rock Studio; its cool built-in CNC-milled bench by AMD is walnut that has been made to look like tufted fabric.

“It was difficult to put a full dining space, kitchen and lounge for the girls in a 15-by-35-foot space, so we had to be smart about layout and customization,” says Milne. Hence, the distinct zones, such as the sleek banquette anchored to the wall. Milne cleverly made extra leather cushions for it, so when stacked they double as stylish booster seats. It’s a small detail that illustrates the designer’s doggedness when it comes to the curated homes she’s known for.

More of her eagle eye is upstairs. The master isn’t huge, but is as shipshape as a fashionable hotel room. Recessed shelves flank the bed snug against a fetching herringbone wall. A cushioned window bench offers oodles of storage underneath. Out the window, Milne created a green roof where in spring, native flowers bloom – something you won’t get in an untouched Cabbagetown Victorian.

Originally published in our Guide 2018 Issue as CanCon Job.