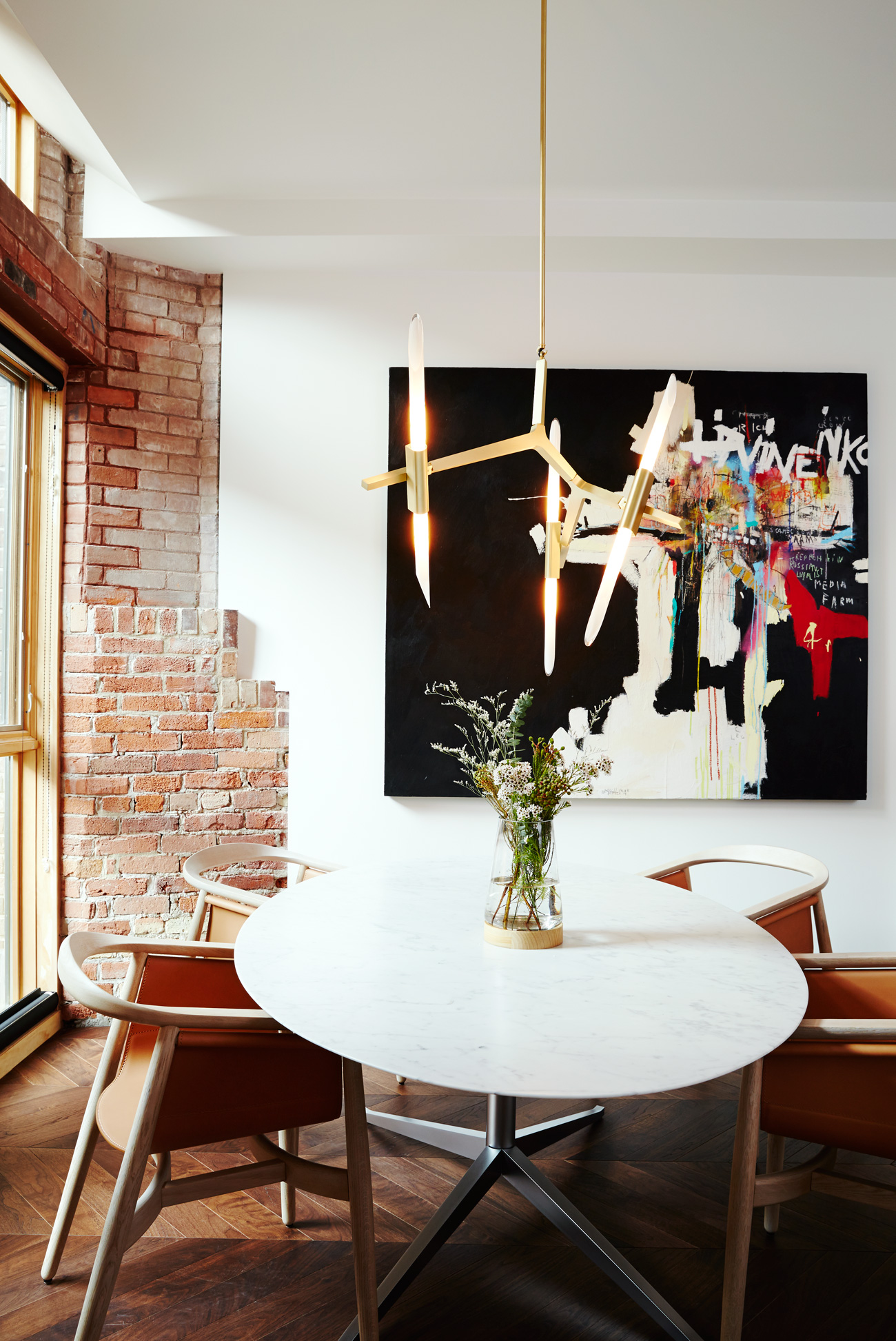 The dining space is graced with a table from Design Within Reach, chairs from Avenue Road and a light from LightForm. 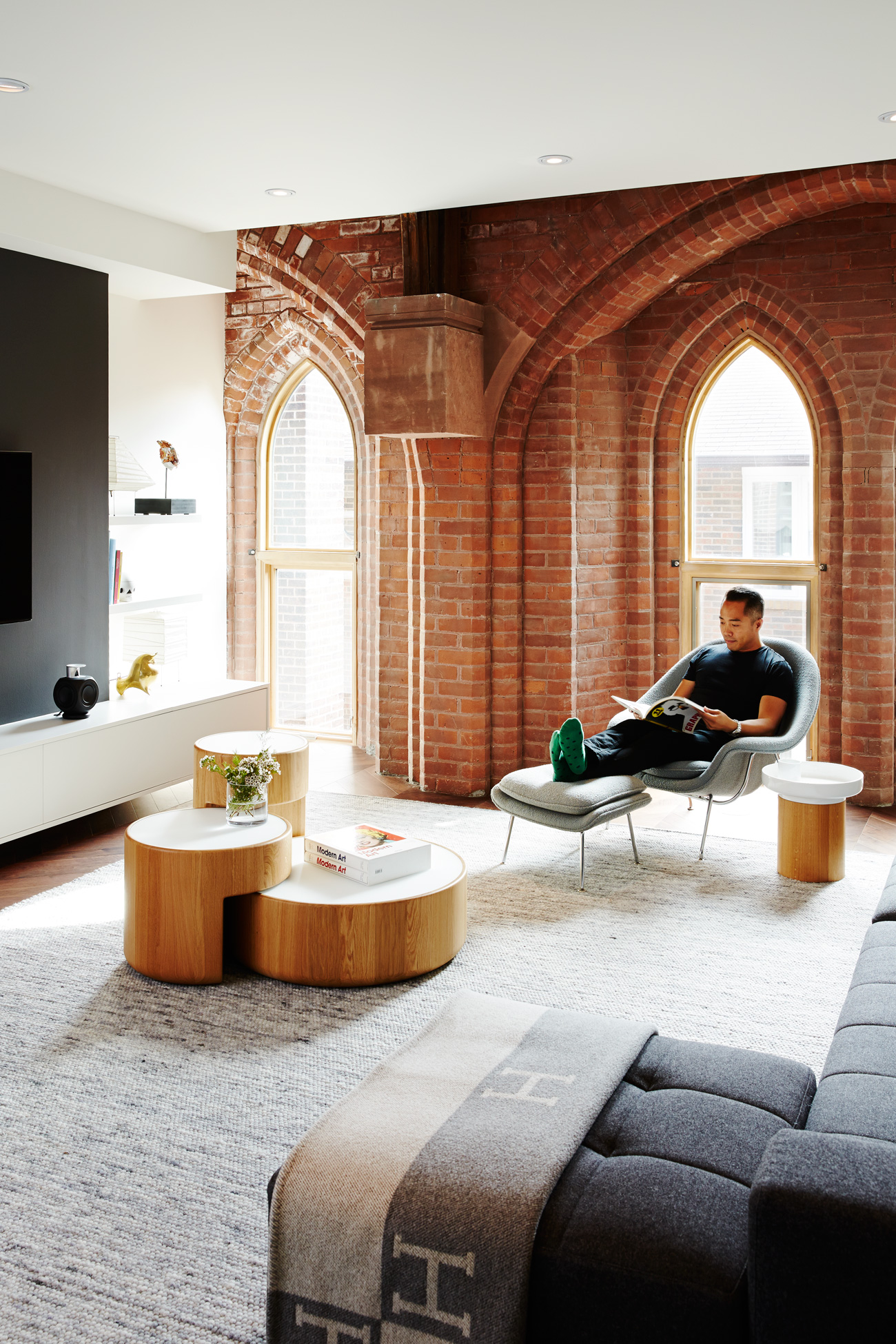 Milne painted the wall behind the TV grey to keep the focus on the lancet arches and capital stone. Tables from Nieuw.ca; sofa from Kiosk. 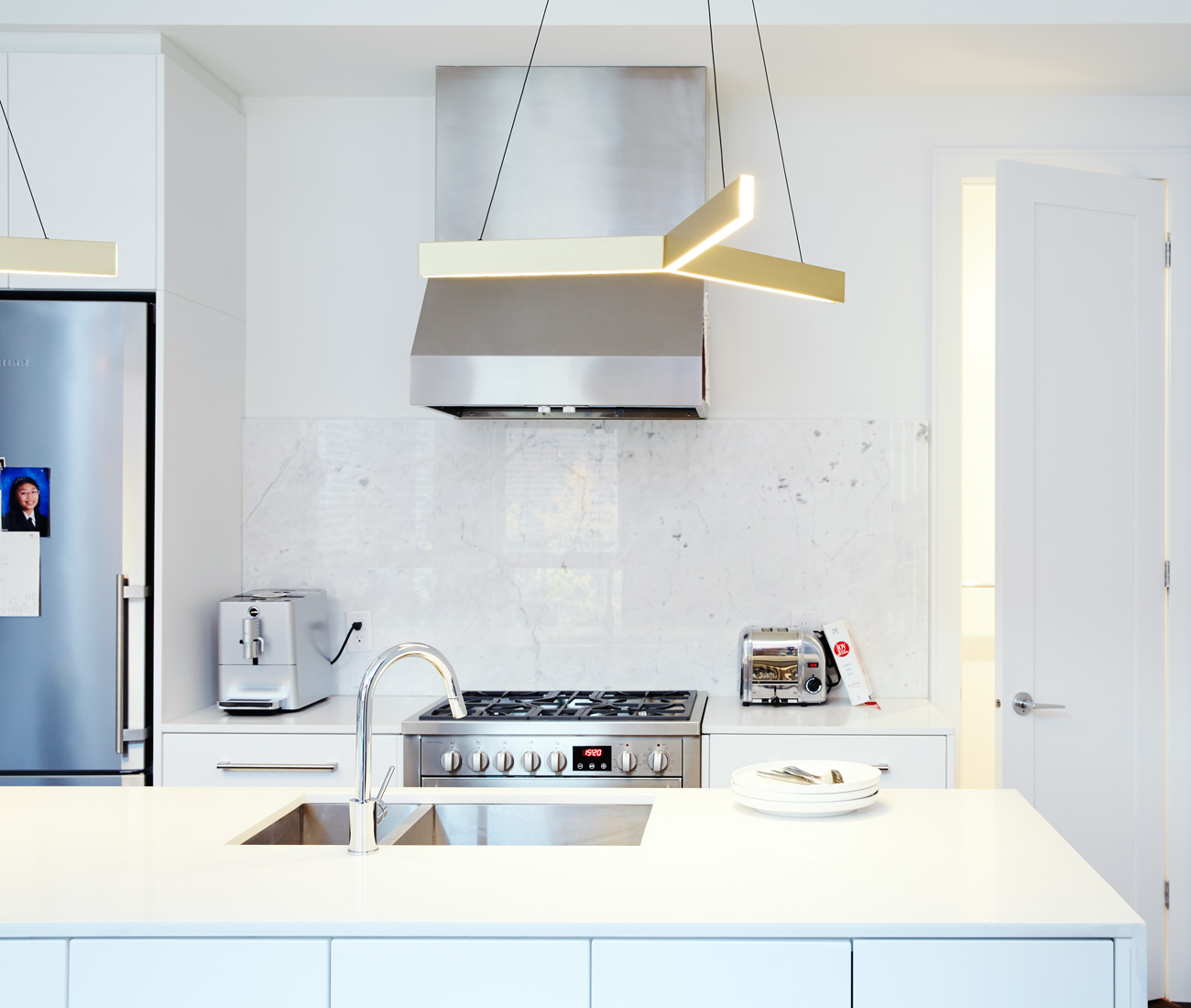 The kitchen boasts loads of storage, and the seamless marble backsplash from Stone Tile adds sparkle. Pendants from Klaus. 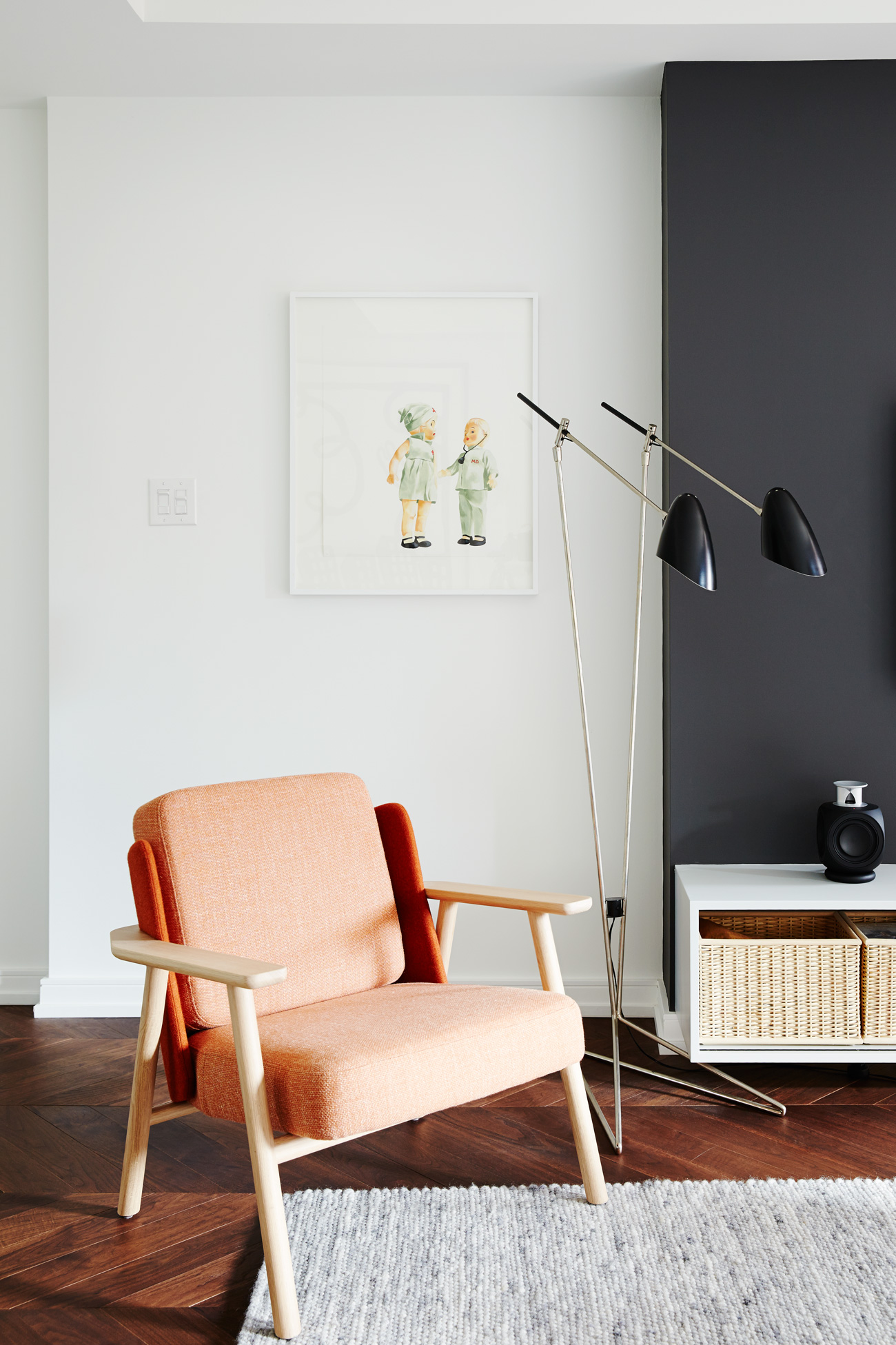 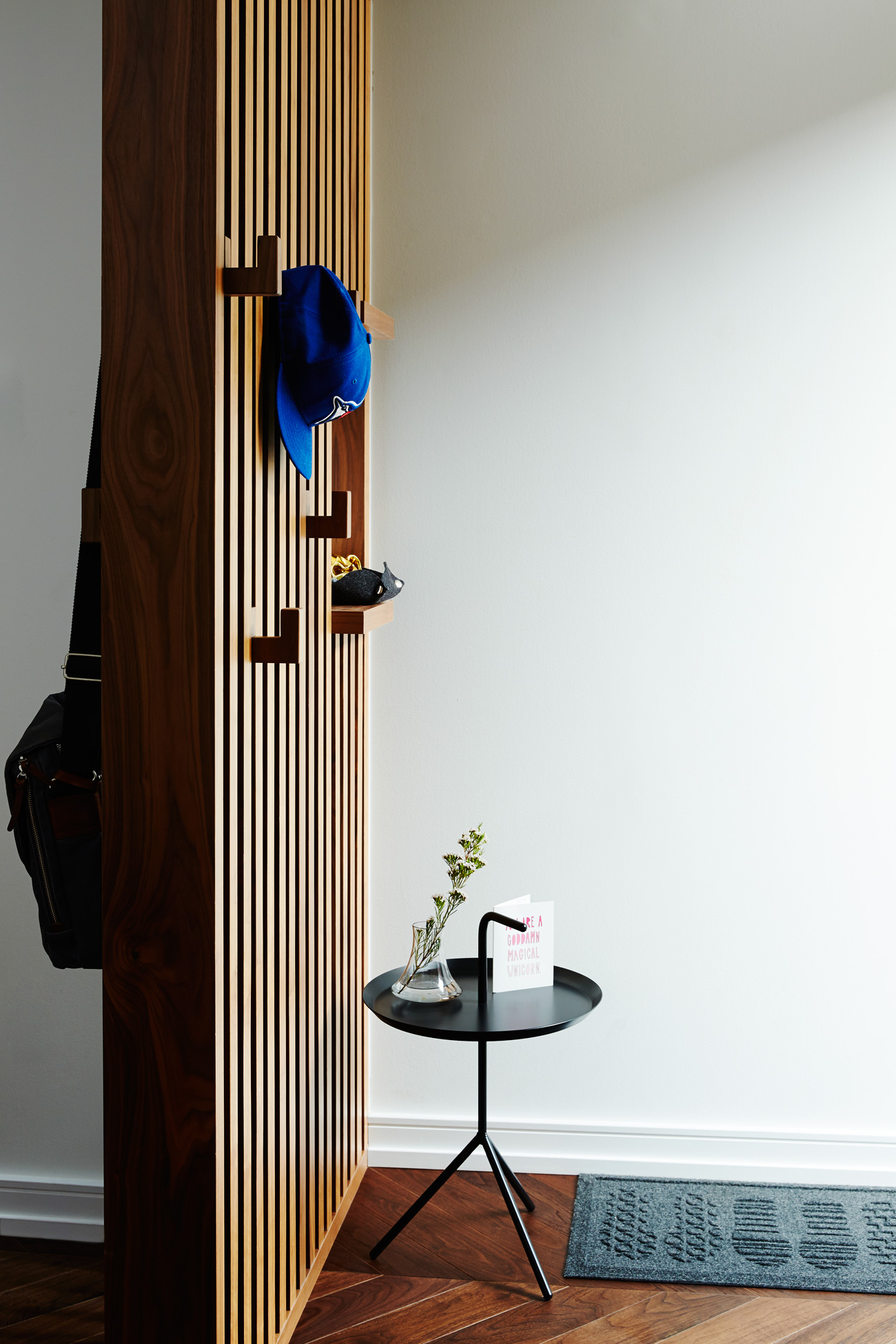 To create a foyer in the tiny entrance, Milne designed a walnut screen with vertical coat hooks. Side table from Klaus. 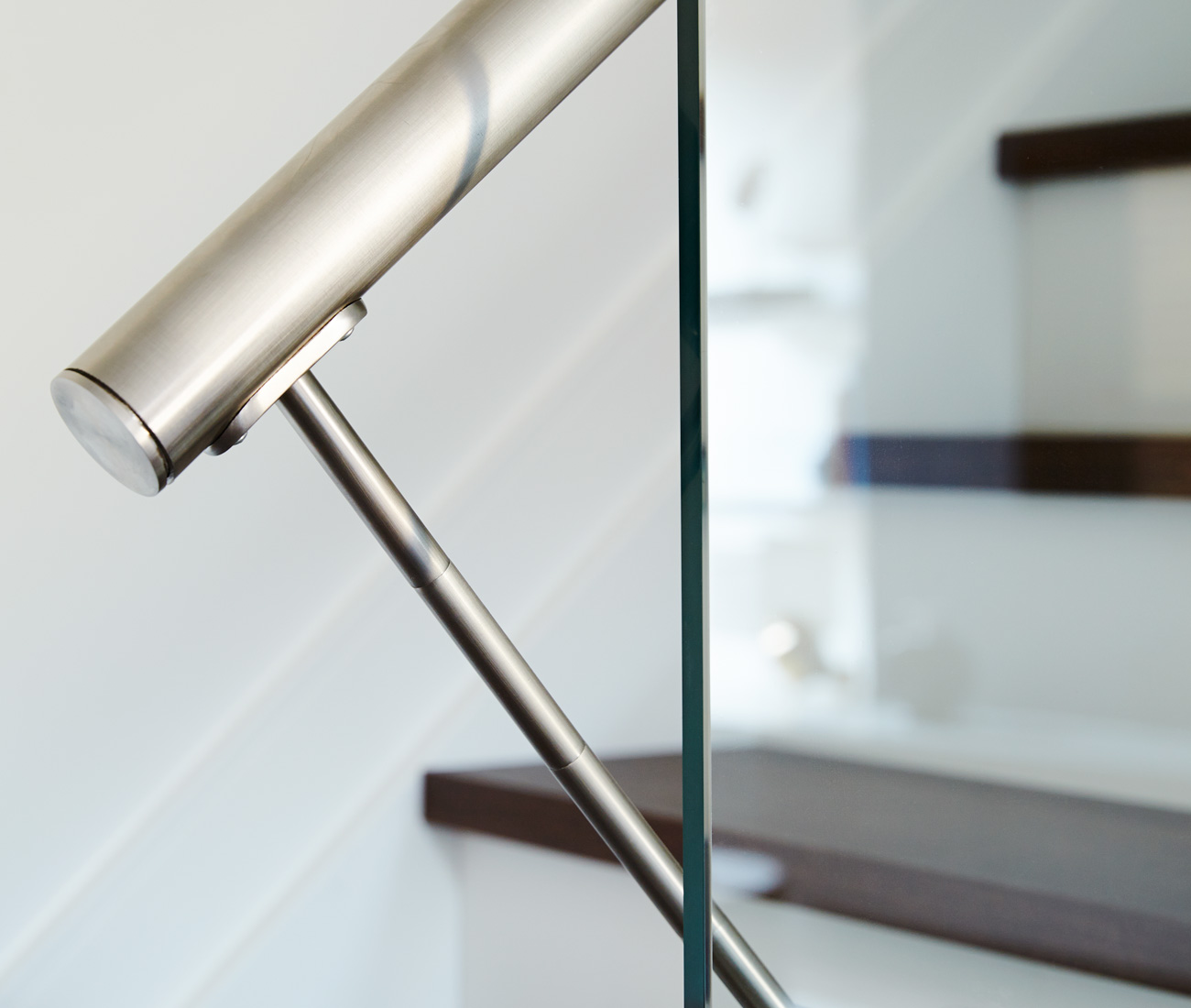 The four-storey climb is made easier and brighter by a clear barricade and custom steel railing by Apex Glass & Mirror. Walnut flooring runs throughout.
Share Tweet Pin Email Print

On his dining room wall, physician Charlie Guiang displays a monumental canvas by artist Mitchell Clark Meller, which features a disassembling body created with oil, household paint, resin, pencil, chalk, and pastels. Guiang was drawn by its mixed-media sensibilities, which isn’t surprising: his new home – four floors in a converted Bloorcourt Village church – is itself a mixed-media wonder. Inside, a tasteful combination of textures and finishes forms an intriguing contrast with the structure’s architecture.

Guiang’s is one of only 17 units in the converted Neo-Gothic church, a project by architect Asen Vitko, co-owner of Dog Day Developers. Vitko wanted to repurpose the site without obliterating its history. “I didn’t cover any of the original structure with drywall,” he says. He restored the stained-glass windows and blasted the wooden frame of the building with ice pellets (a cleaner alternative to sandblasting). He also sliced the church from top to bottom “like a cake,” creating tall, skinny units, each of which features a portion of the original cathedral ceiling, made from old-growth Ontario lumber.

The approach resonated with Guiang, who was tired of boxy steel-and-glass condos and looking for a place with some history. To brighten the rooms, Guiang hired interior designer and gallerist Alison Milne – who had sold him the Meller piece in 2012. “Everything in the church’s architecture is pointy and square,” says Milne, “so we needed pieces that would soften that effect.” She outfitted the ground-floor dining room with an oval honed-marble table and roomy wishbone-style chairs with tanned-leather saddles. In the second-floor living room, organically shaped coffee tables of oak and matte-white glass nestle into each other like mushrooms. To counter the effect of the heavy-looking brick, Milne coated new walls in clean Oxford white and opened up some of the smaller spaces, including the stairwell, which is now lined with glass. (Guiang’s ground floor is a modest 30 square metres, and the three upper floors get progressively smaller as you climb.)

The master bedroom lies at the very top of the condo, under the trussed and steeply pitched ceiling. To make the best use of this tight space, Milne tucked the bed under the wooden dormer encasing the window – a practical but homey solution that reconciles the needs of a modern condo with the ambience of the original church. The room makes him feel, says Guiang, as if he’s up high in a tree house.

Originally published in our Spring 2016 issue as Altered State.