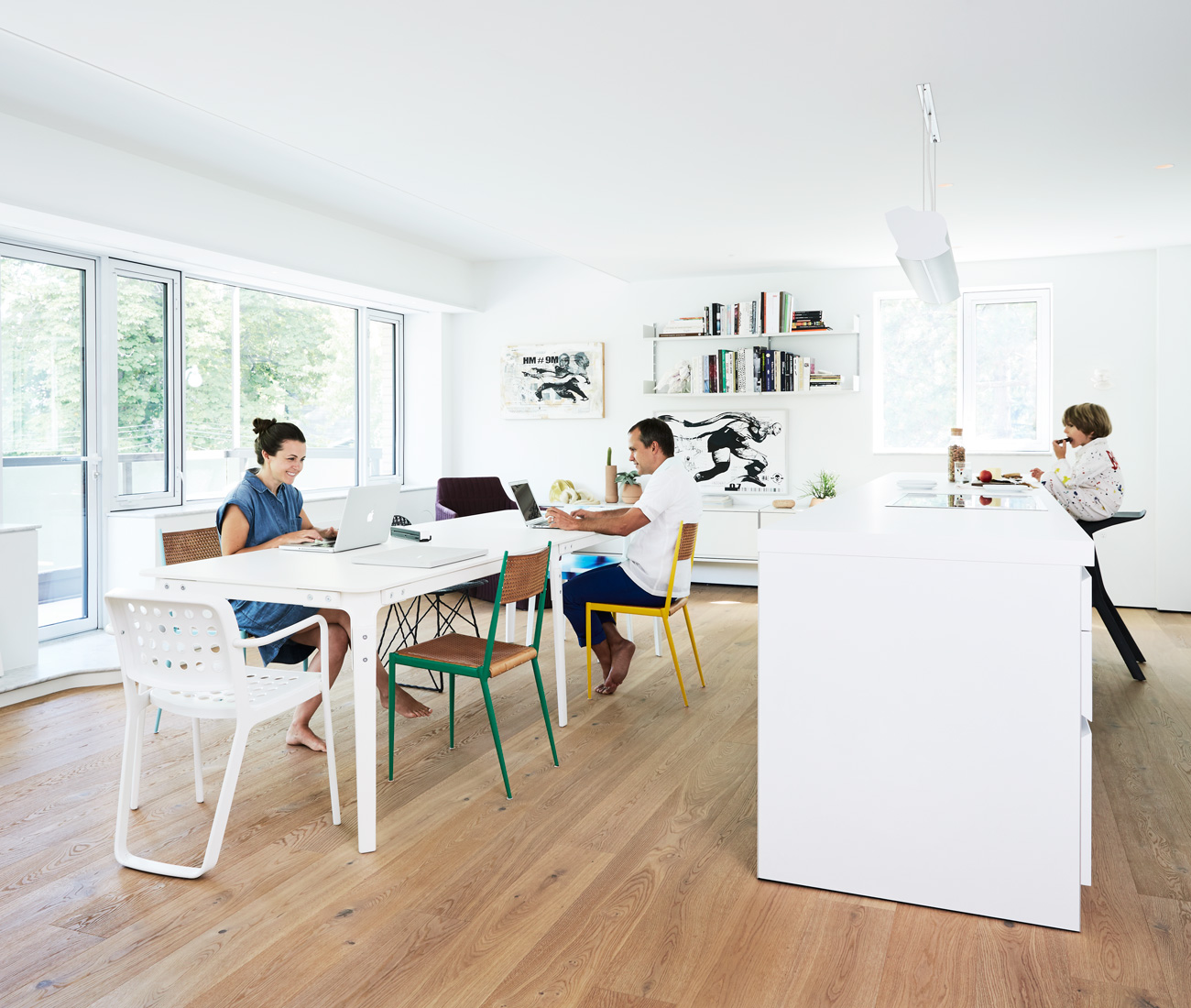 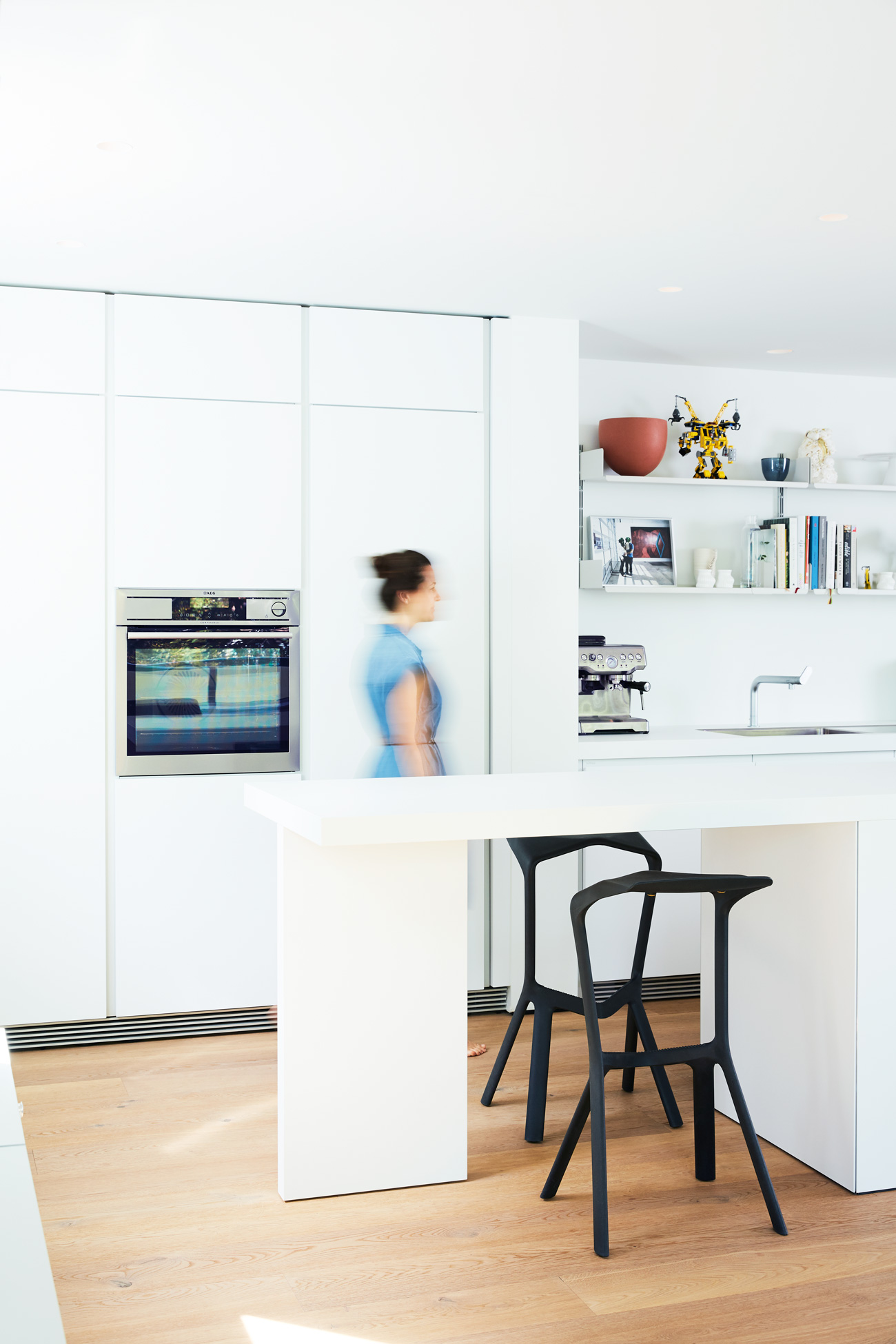 Bar stools by Plank; b1 kitchen system by Bulthaup. Photo by Naomi Finlay. 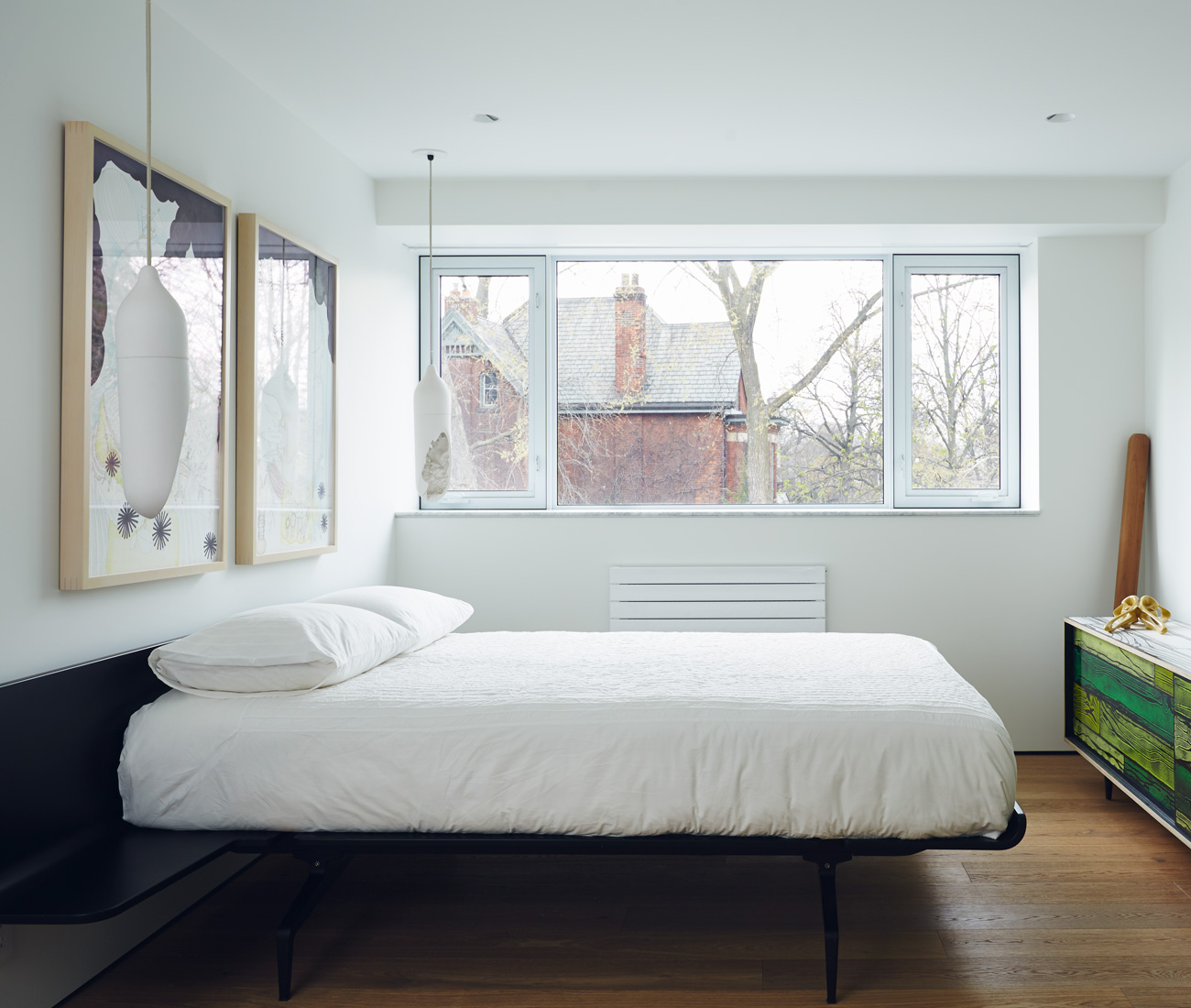 In the master bedroom: bed by Legnoletto; cabinet by Established & Sons; photo by Timothy Saccenti. Photo by Michael Graydon. 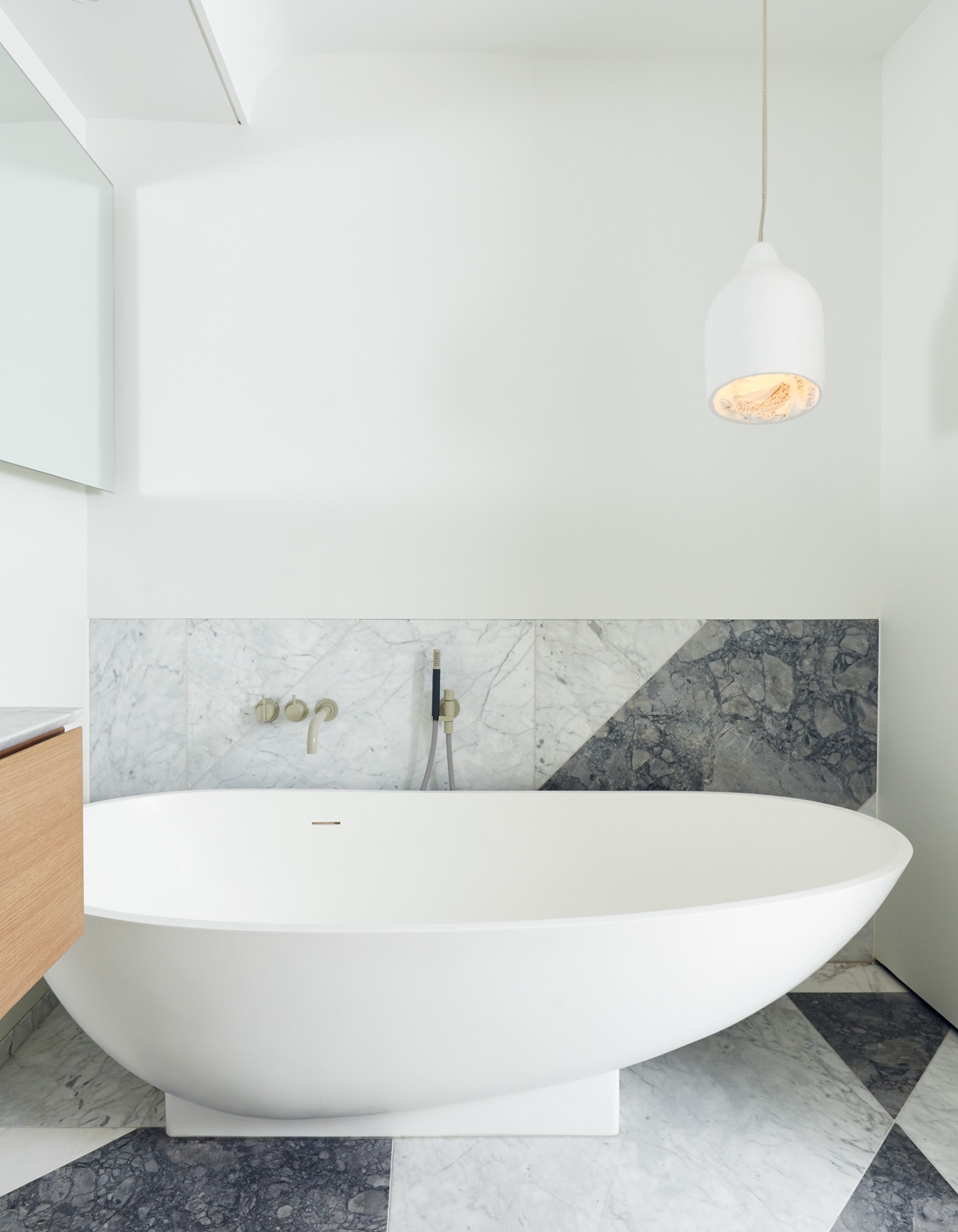 Flooring and backsplash were fashioned from York Fabrica marble off-cuts. Tub and faucets from Ginger’s. Photo by Michael Graydon. 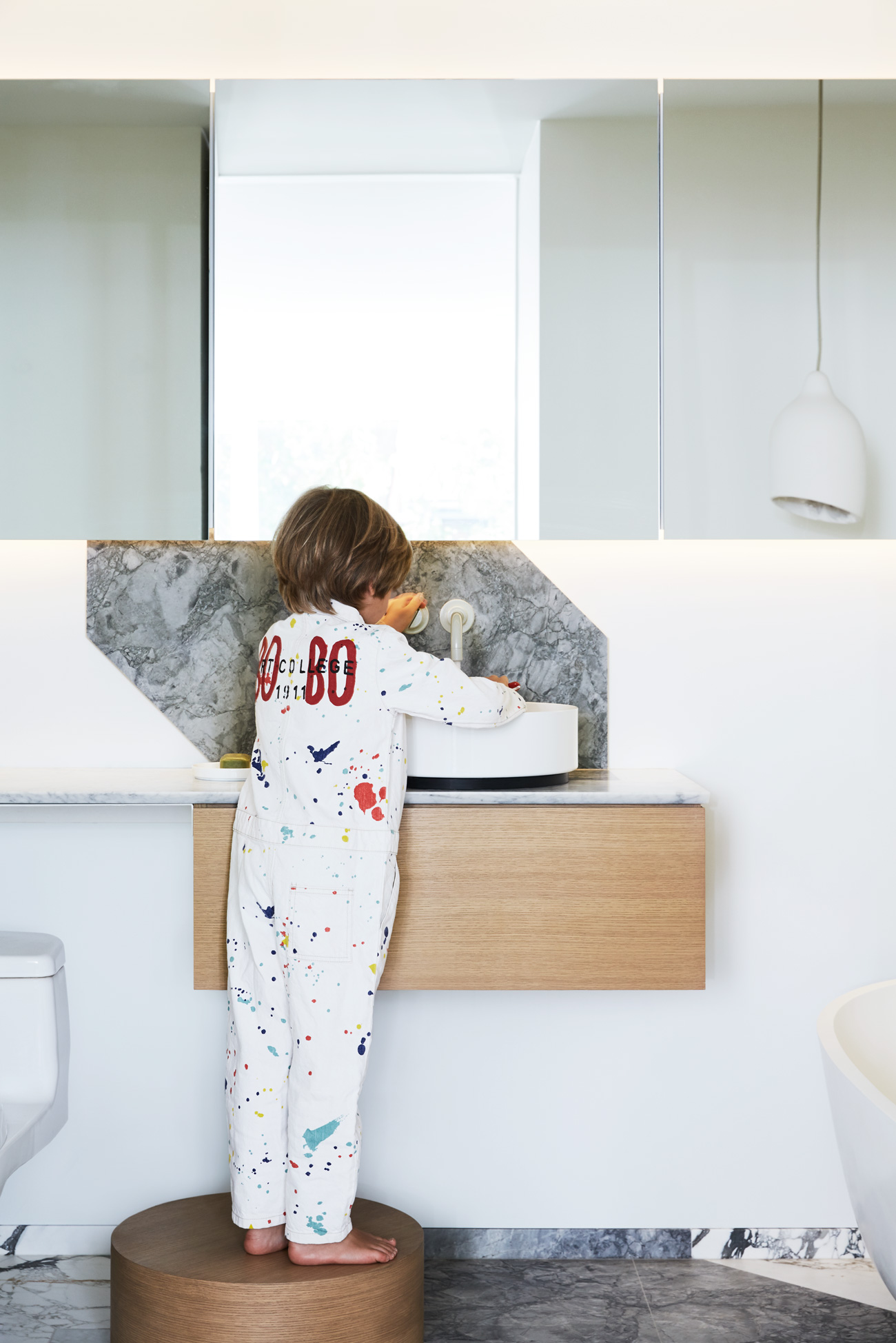 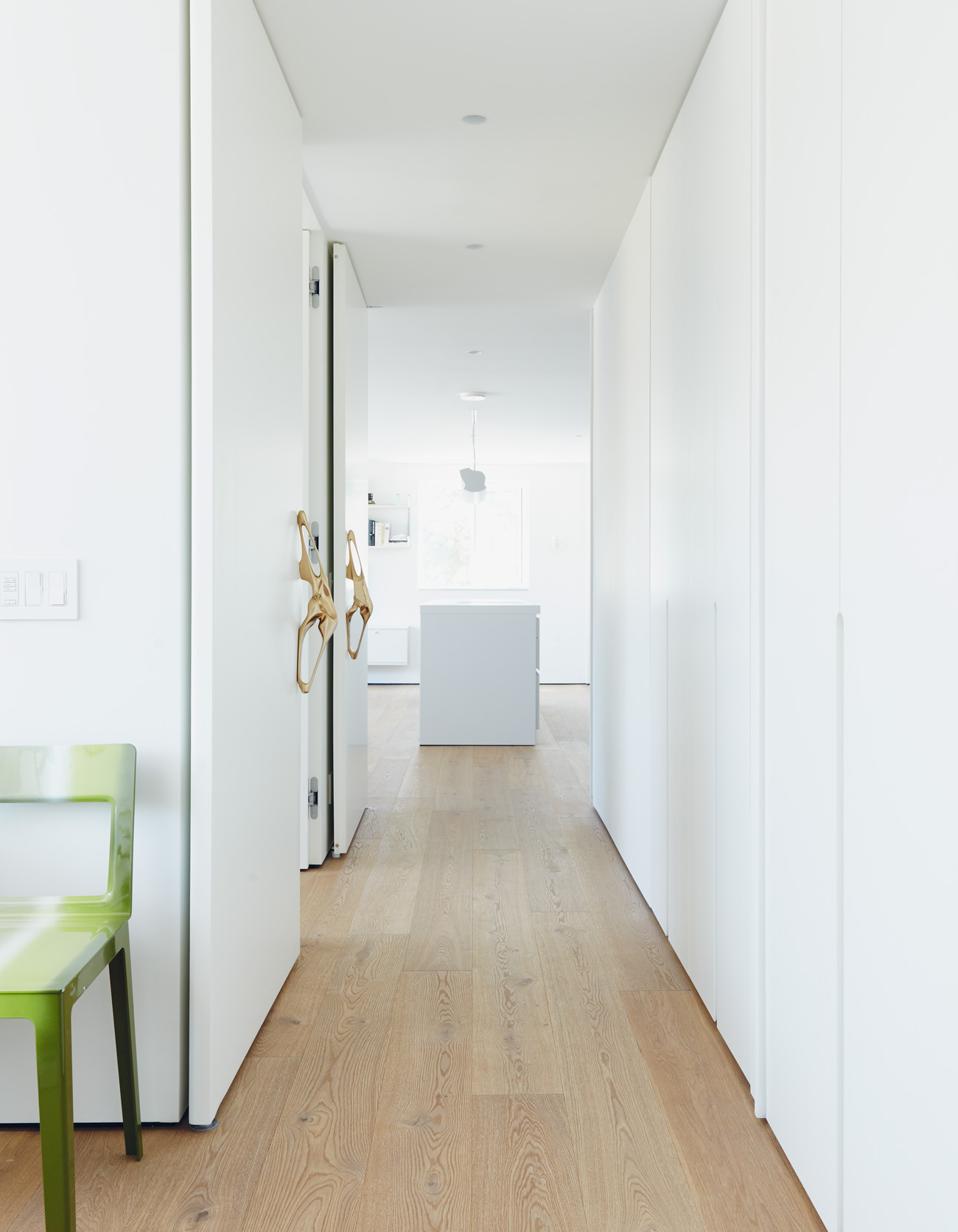 Six metres of millwork by MCM conceals a family’s worth of stuff while space-saving sliding doors offer privacy. Photo by Michael Graydon. 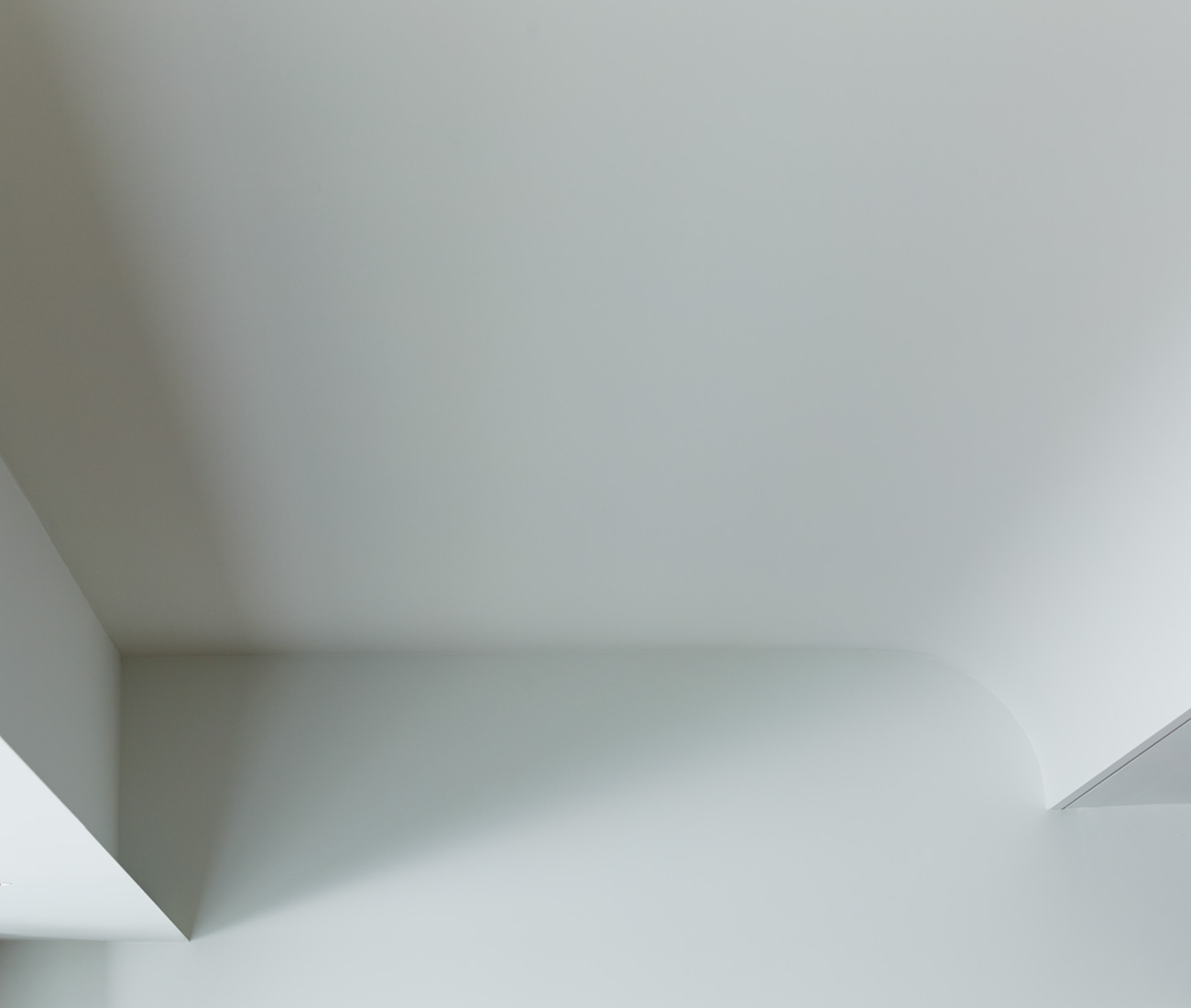 A curve was inserted where the dropped ceiling was removed to smooth the transition between heights. Photo by Michael Graydon. 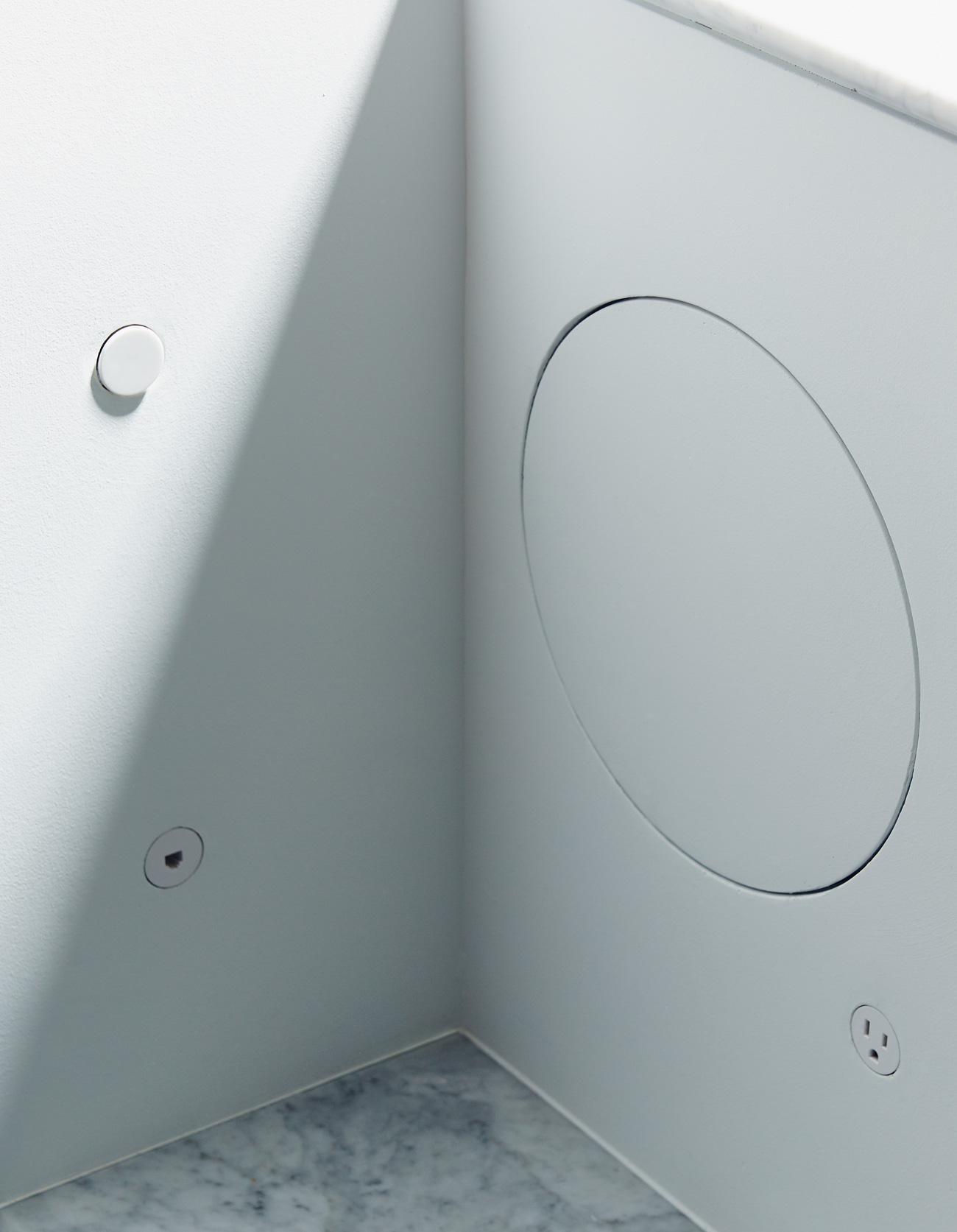 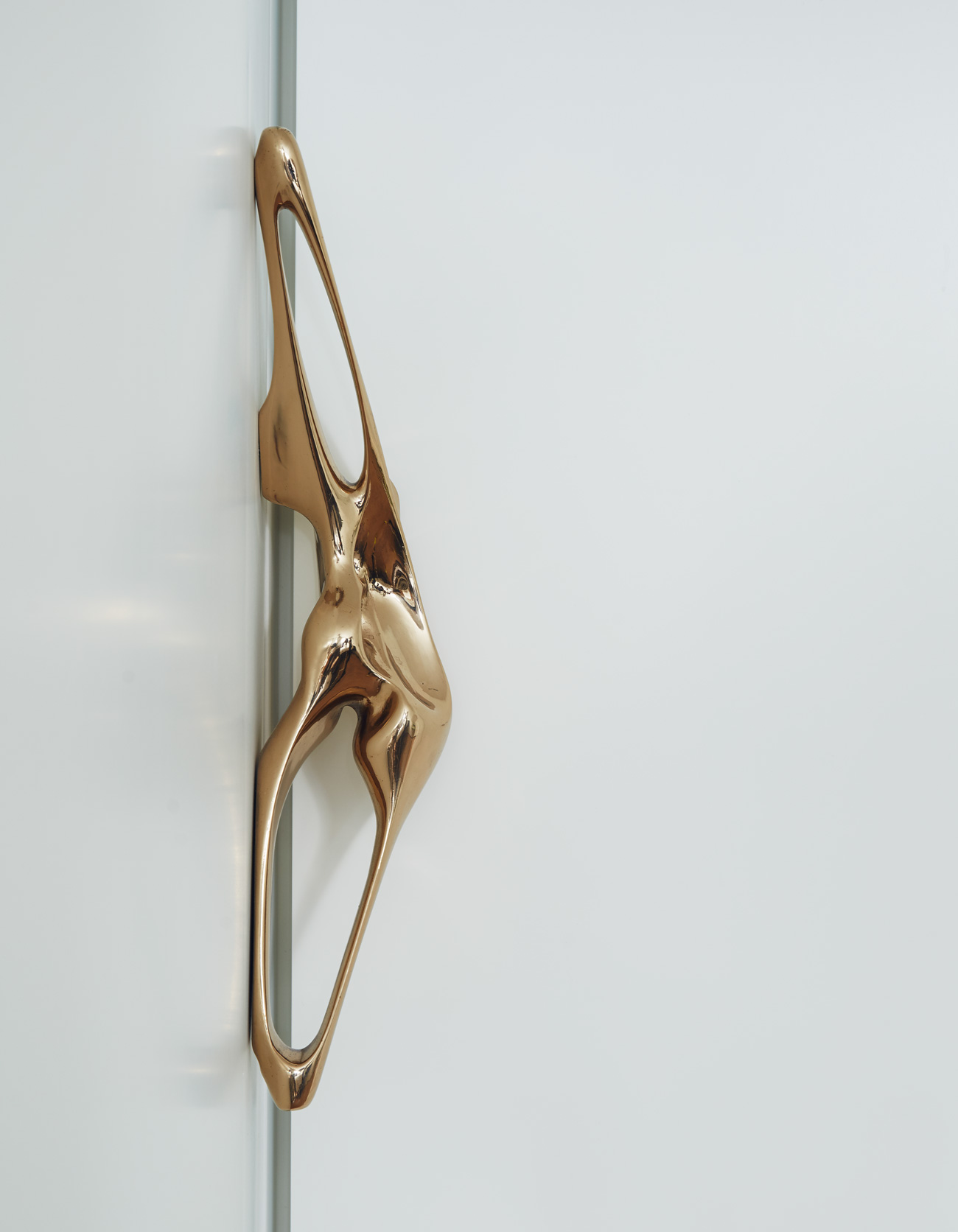 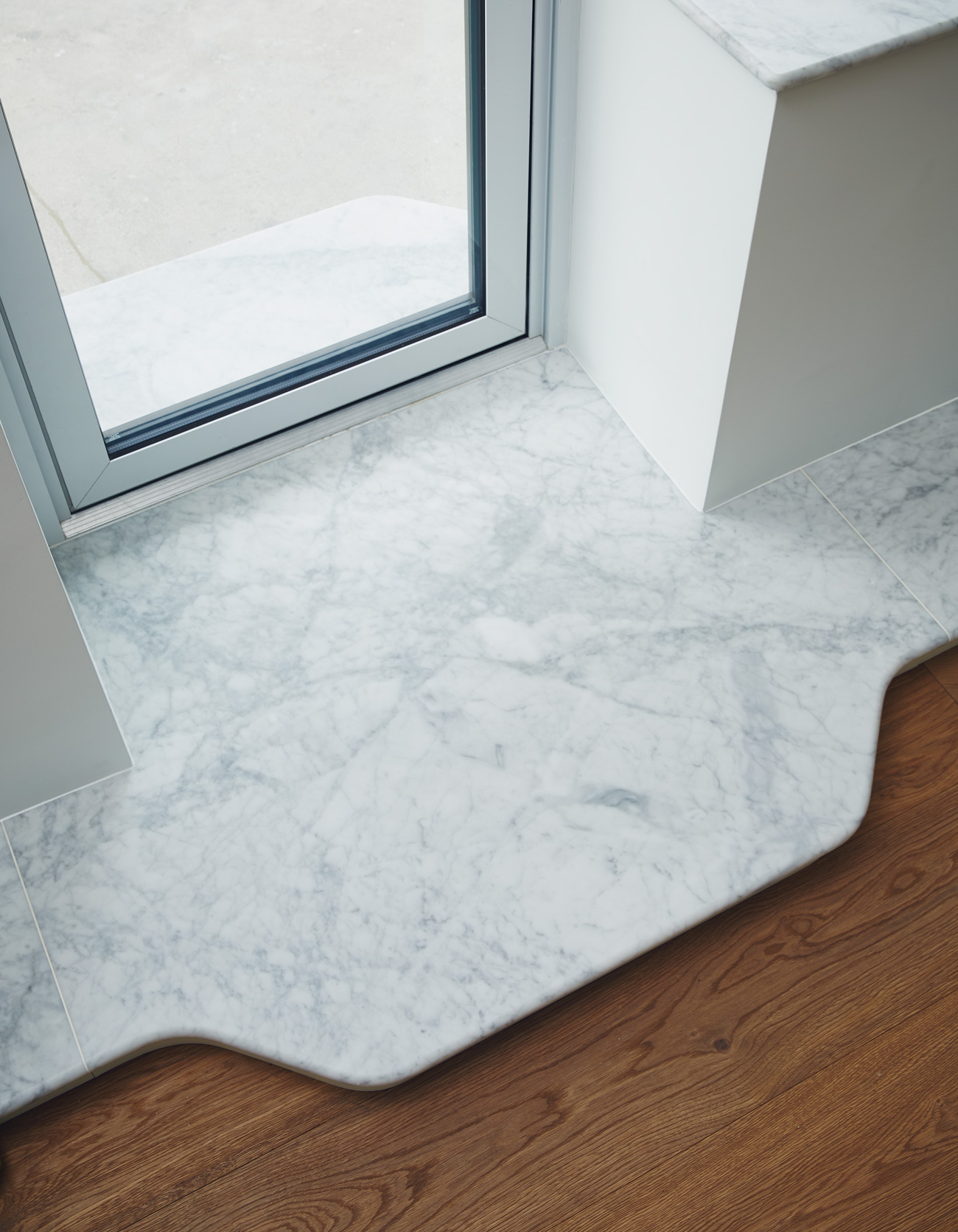 Bands of marble edge the windows and replace baseboards. Photo by Michael Graydon. 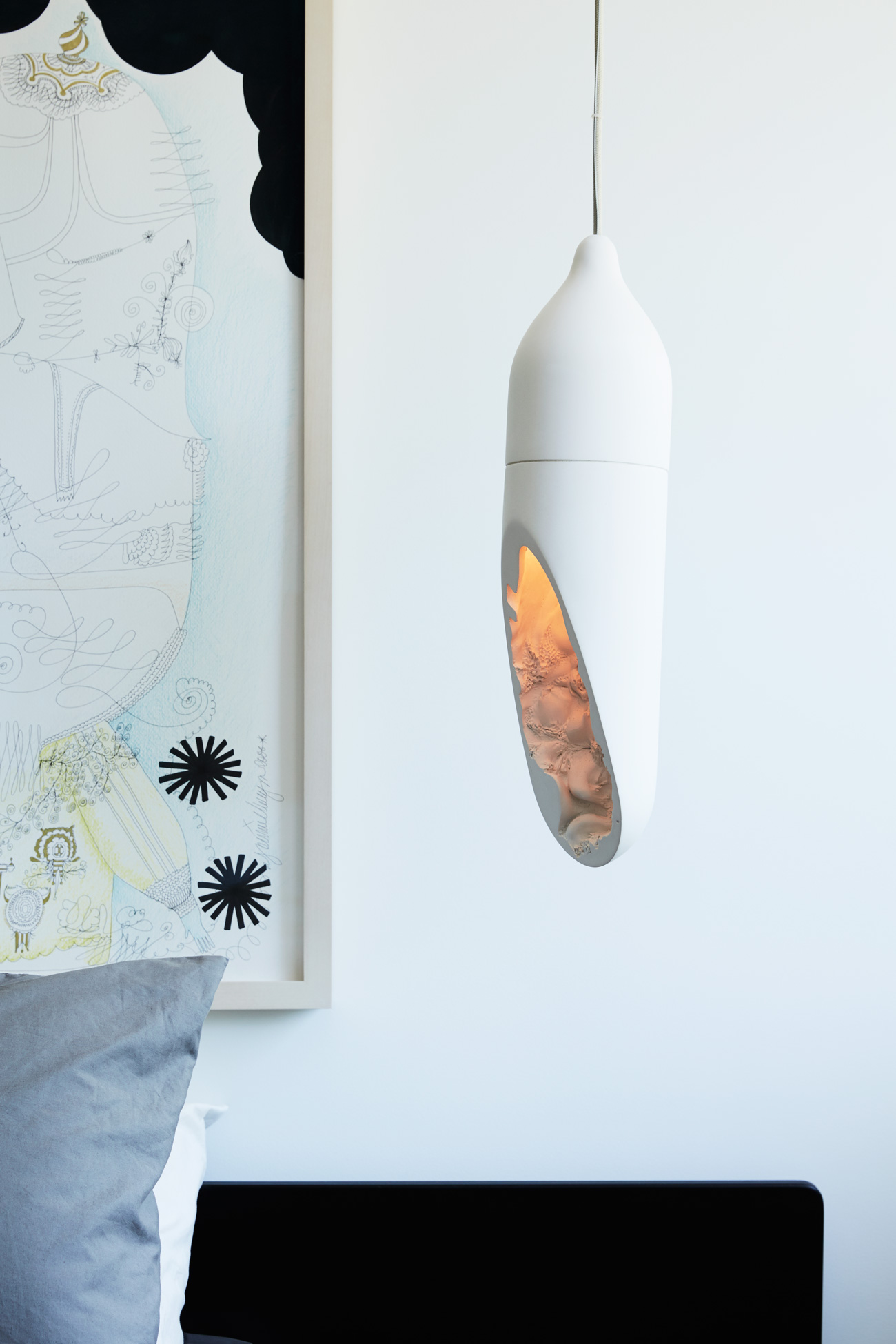 By Iris Benaroia
Photography by Naomi Finlay and Michael Graydon

Rosedale, it may surprise you to know, is not all rambling houses and sprawling gardens. You can find several nondescript condo buildings here, too. The beige-bricked mid-rises predate the first moon landing by about a decade, sometimes with suite interiors to match. Inhabiting one of these units is David Boira and Zoë Coombes, the designers behind the sensuous furniture and lighting line, Cmmnwlth, who count Issey Miyake and MoMA as clients.

Armed with architecture degrees from Columbia, Boira and Coombes were running an art gallery/design studio in Brooklyn before they purchased this home in 2013 and made the move with their young son Pau to be closer to Coombes’s family. Hipsterville to Hauteville is an unlikely trajectory, but this couple isn’t bound by convention. “We were drawn to the area because it’s surrounded by trees, it’s bikeable and it’s a six-minute walk to the subway,” says Coombes. Plus, living carefree in a flat with a doorman appealed to the couple’s wanderlust.

The 112-square-metre unit was everything the neatniks are not: messy and tasteless. Chintz fabric reigned, the walls were yellow, the rooms poky and the ceiling unusually squat at 2.1 metres. “The ventilation scheme had ducts installed below the ceiling joist,” which explained the height, says Boira. But a worse discovery came post-demolition when they found faulty wiring. “We were not comfortable covering up the mess with nice paint and pretty tiles,” he says. Nor were Boszko & Verity, their construction partners. Bringing the unit up to code prompted a gut job down to the concrete slab and, since everything was coming out anyway, they replaced the existing living-room windows with higher-quality frames.

Next, they addressed air quality – Coombes’s bugbear. “Condos sometimes have HVAC issues, so shared air isn’t always ideal,” she says. The couple adopted passive-house principles, scrupulously sealing the home and installing a snazzy Zehnder HRV unit that flushes fresh air into the rooms. The result: the apartment has a definite plant-shop freshness.

Once a warren, the layout is now open-plan and uber-tidy. Gone is the strange little kitchen with the pass-through – “leftovers from English grandiosity,” jokes Boira. In its place is a Bulthaup beauty. A motherlode of custom millwork stretches from the foyer around to the private spaces, concealing everything from bikes to blouses.

“They’re not huge spaces, so you really have to work to make them feel large,” says Coombes, adding that prioritizing is key. “We would rather have a 10-person dinner party any day over marathon sessions of TV.” This explains the absence of sofas. Editing also happened in the master ensuite where there isn’t a shower, but instead a chalky half-egg of a tub next to a sole-cast gypsum Cmmnwlth light.

Other personal details abound. Boira and Pau (a Star Wars enthusiast) made a Stormtrooper cover for the kitchen radiator, and the place is filled with killer artwork and high-end modern furniture. “The artwork is mostly by friends, some are collaborations,” says Boira. Seen as a whole, the apartment is a brilliant example of what can be done with a lot of imagination and a little space: Leave the palatial rooms to the people in the big Rosedale houses. “We like it this way,” says Coombes. “We lock up in minutes and off we go on our next adventure.”