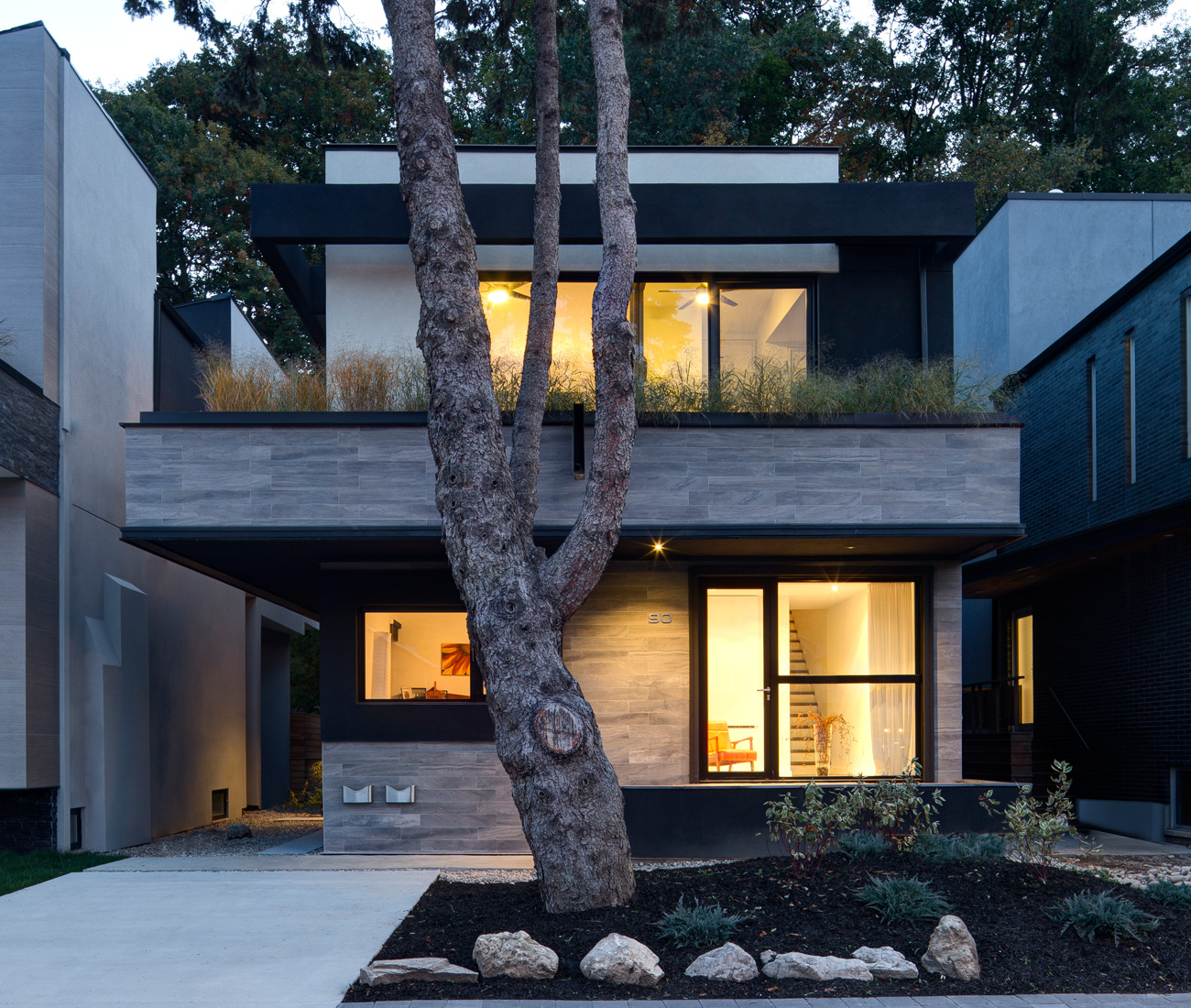 By Carolyn Pioro
Photography by Arnaud Marthouret and Seamus O’Hara

Ravines have been on David Peterson’s mind for almost two decades now. The architect and Sheridan College professor (and, since we’re keeping track, previously featured architect in Designlines), whose west Toronto home backs directly onto a lush stretch of the South Kingsway ravine, acknowledges that the landform provides much more than verdant views and visual fodder for Insta-pics. Sure, he, his wife and his son enjoy having coffee on their second-storey veranda while watching birds nest but, by living so close to this natural landscape, both Peterson’s architectural practice and his teaching approach have been informed and inspired by an honest and sensitive relationship with nature, one that speaks to experiencing wildness in the middle of the city.

Completed in 2015, what was originally a post-war bungalow is now a modern two-family residence clad in porcelain and stucco. Peterson’s intervention incorporates elements from its Arts and Crafts roots even though it might not be entirely clear at first glance. “It seems very new, but according to city bylaw, it’s actually an existing building,” says Peterson. “Because construction contributes more than anything to landfill, the strategy for me is always to start off by looking at what’s there and to then make choices around what I can keep and what I can reuse.” The architect and his family’s larger two-bedroom unit is located on the entirety of the upstairs level and some of the ground floor and basement. The smaller two-bedroom apartment, still with luxurious 3.66-metre-high ceilings, encompasses the remainder of the ground floor.

The sculptural, sloping skylight-lit ceiling on the second floor is thanks in part to the ingenious, asphalt-free white roof whose varied surface elevations accommodate cascading rainwater runoff that feeds the native switch grasses and the gauzy coral-hued sumac below. The additional irrigation feeds surrounding plantings and trees at the ravine level, which might otherwise dry out in the summer.

Although Peterson never set out to create any sort of master plan for his small corner of Toronto’s Swansea neighbourhood, that’s exactly what happened. Over the past five years, he’s completed four more custom builds along a 50-metre stretch of his street, each one featuring unique organic elements in dialogue with the surrounding flora and fauna. The most recently completed, a 190-square-metre beauty clad in Eramosa stone from the Wiarton area of Bruce Peninsula, features a cantilevered second-floor master bedroom built atop the existing masonry walls of the original bungalow. Of the five projects, it’s this one that most thoughtfully plays up the Arts and Crafts-vernacular of the site’s previous house. Traditional dark oak trim frames the expansive glazing, and frameless bronze glass Juliet balconies add privacy without obstructing westward views of the ravine. “For me, it was about trying to recall the tradition of craftsmanship, especially when I was making a building that I knew was to be compared to other builders’ houses, which don’t always tend to be well-crafted,” says Peterson.

Principles of biophilic design, which seek to connect and incorporate natural forms, textures, materiality and finishes into the built environment for our own well-being, have gained even more relevance because of COVID-19, both for our health and for our sanity during times of isolation and quarantine. Peterson sees this as a positive move but considers the term “urban ecology” to better fit the scope of his practice. “For me, the biophilic design approach to building is very human-centric,” he says. “It really thinks about human health, related to things in the natural world. Within an urban ecological approach, for example, I would purposefully cantilever an addition so that the roots of the 200-year-old oak tree I was building next to would stay healthy.”

In the 1996 book, Accidental City, journalist Robert Fulford refers to Toronto’s 18,000-hectare ravine system as the heart of this city’s “emotional geography.” We have an innate priority, a desire, to seek a connection to nature. For Peterson, that connection is a reciprocal one and his residential builds are shaped by it. “You shouldn’t think of a backyard and the forest as being unused, it’s being used by lots of living things,” he says. “And if you use it exclusively for yourself then you’ll remove them from that landscape.” DAVIDPETERSONARCH.CA