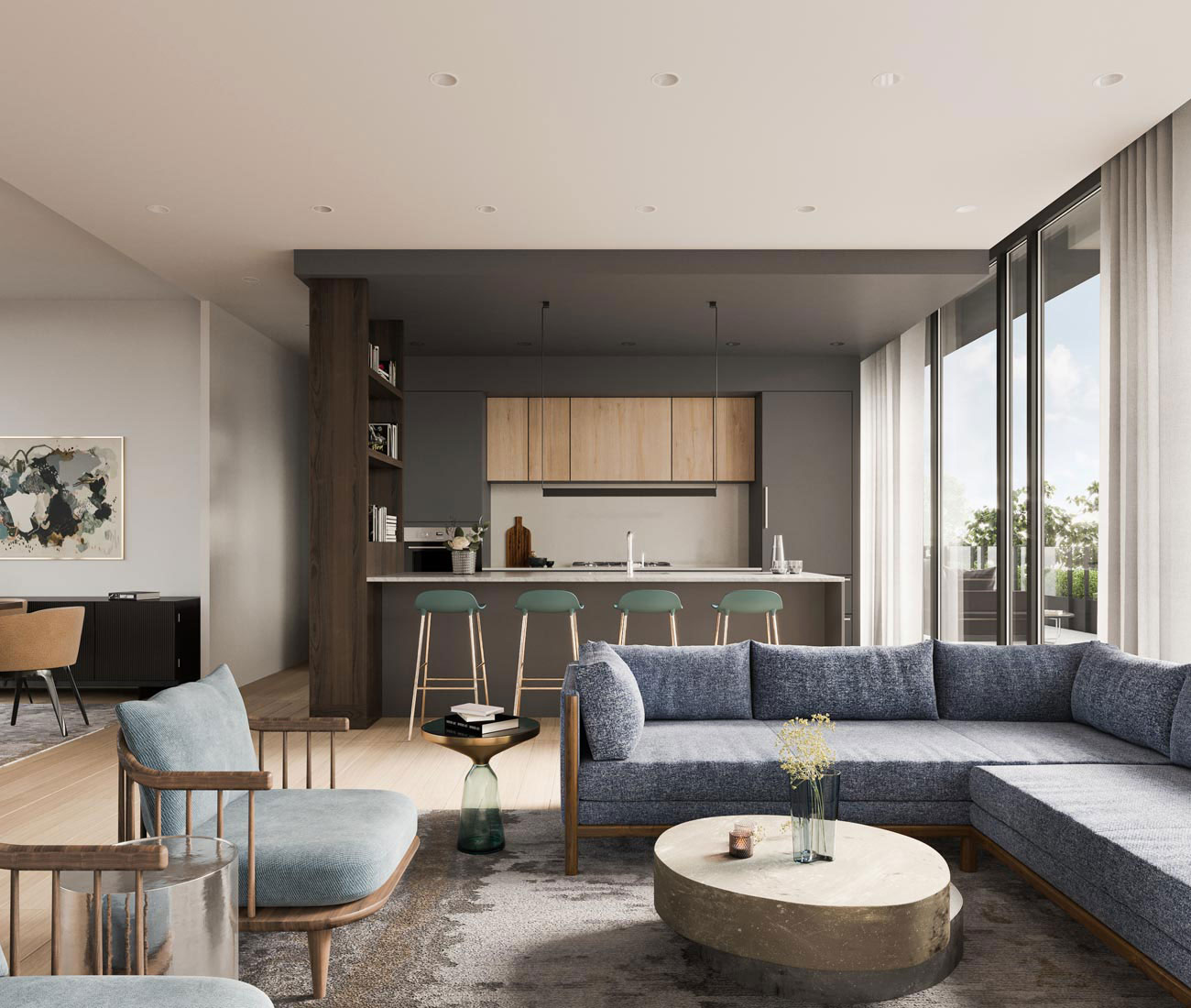 A rendering of a condo in 1414 Bayview, whose interior is being designed by Sixteen Degree Studio.
Share Tweet Pin Email Print

Condos need not be shoebox-sized spaces inside featureless steel and glass towers, and these two new developments prove it

Are Toronto’s glass-and-steel days over? It’s unlikely, but amidst the new high-rise condo towers are a handful of five to 15-storey developments, the so-called “missing middle,” that forego black hole levels of density for more spacious, design-forward accommodations. Inside, they feel like homes, not shoeboxes. Outside, they respect the street.

ArchitectsAlliance and developer Gairloch have a penchant for this kind of thing. Their previous project, 383 Sorauren, was finished in 2016 and well received, earning them praise and a Toronto Urban Design Award. At 10 storeys, it’s larger than the neighbouring homes, but not disproportionately so. It’s also clad in red brick, and what’s more Toronto than that?

Their previous success is why we’re excited for their next two developments, Junction Point and 1414 Bayview. Both appear set to do what 383 Sorauren added to the lower Junction: thoughtfully increase density while adding some visual panache to the ‘hood. Suckers for gorgeous spaces that we are, we’re also excited that they’ve brought in Commute Design and Sixteen Degree Studio to handle the interiors – the first condo project for both firms. Below, we take a sneak peek at Gairloch and AA’s newest collaborations.

At a modest eight storeys, 1414 will feature double-height retail at ground floor and 44 units above, including one, two and three-bedroom suites. Designed as a “fabric” building – as in urban fabric, not cotton – 1414 is one of the first developments to abide by the city’s new development plan for Yonge and Eg, which calls for increased density, albeit with a deft architectural touch that translates to mid-rises with terraces and stepbacks. The result, ArchitectsAlliance principal Peter Clewes says, is an attractive enclosure for the street that doesn’t overwhelm the neighbourhood. The brickwork and narrow windows, chosen for their Victorian scale, reinterprets Toronto’s unique architectural history, as well. “If you’re afraid of change, you won’t like it,” says Clewes. “If you like vibrant neighbourhoods, you will.”

Inside, Stephanie Vermeulen and Kelly Doyle of Sixteen Degree Studio have been free to extrapolate the modern, comfortable aesthetic of their residential projects (look at the Leaside home we featured, as an example) to the larger setting. Particular attention is being paid to the amenities, which the pair say are too often ignored in Toronto. Citing the New York by Frank Gehry and Toronto’s Harbour Square as inspiration, they’re creating lounge-like spaces that feel personal and residential. “We wanted the amenity spaces to feel like the entrance to your own personal living space,” says Doyle, “and something that you would use on a daily basis.”

Where 1414 is square-shouldered and stately, Junction Point is situated on a wedge-shaped lot between the Junction and Bloordale. The result is a building with a three-sided, Flatiron-esque profile that, like Bayview, rises a modest eight storeys. Clewes designed Junction Point to be a fabric building as well, which contributes to its most striking feature: the series of brick screens on its facade. Alongside recessed balconies, the screens create a convincing street enclosure that still allows for plenty of light inside. The facade also pulls back at ground level to open up a wide promenade, while its western face, like Bayview, is terraced to provide outdoor space and reduce its visual bulk.

For Commute Design principal Hamid Samad, the location gave the project some extra meaning. Having lived nearby for 13 years, Samad understood what Junction Point would bring to the neighbourhood, and felt they were a perfect match for one another. The project’s moderate scale is designer-friendly, too, allowing for flourishes typically found in homes, like integrated storage and fully tiled bathroom walls. And like their gorgeous restaurant projects, Commute is designing lighting and wall accessories, as well. “I think that because this is our first condo project, it allows for us to not have any preconceived notions,” says Samad, adding, “We wanted to create a home and focus on small details that are not typical.”