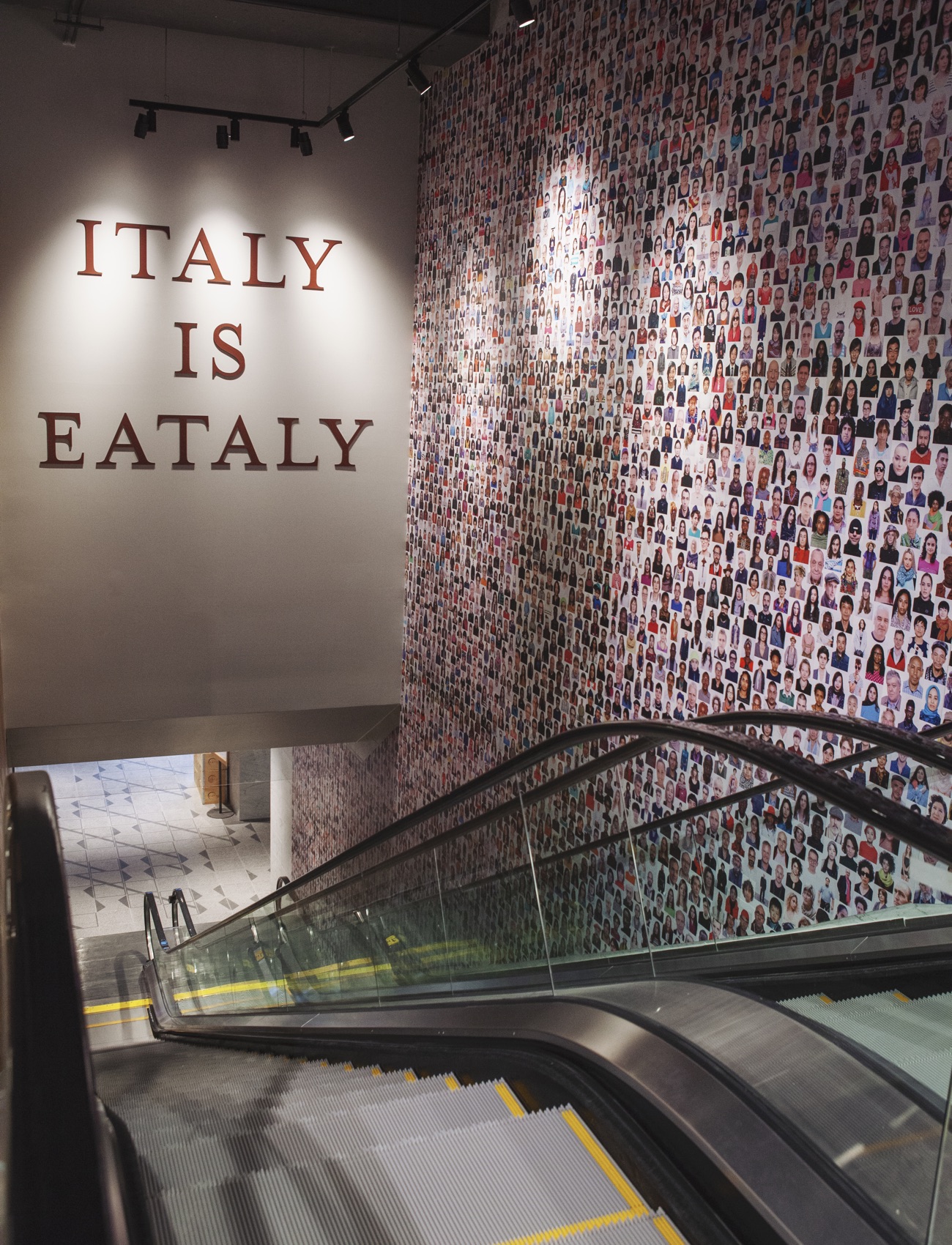 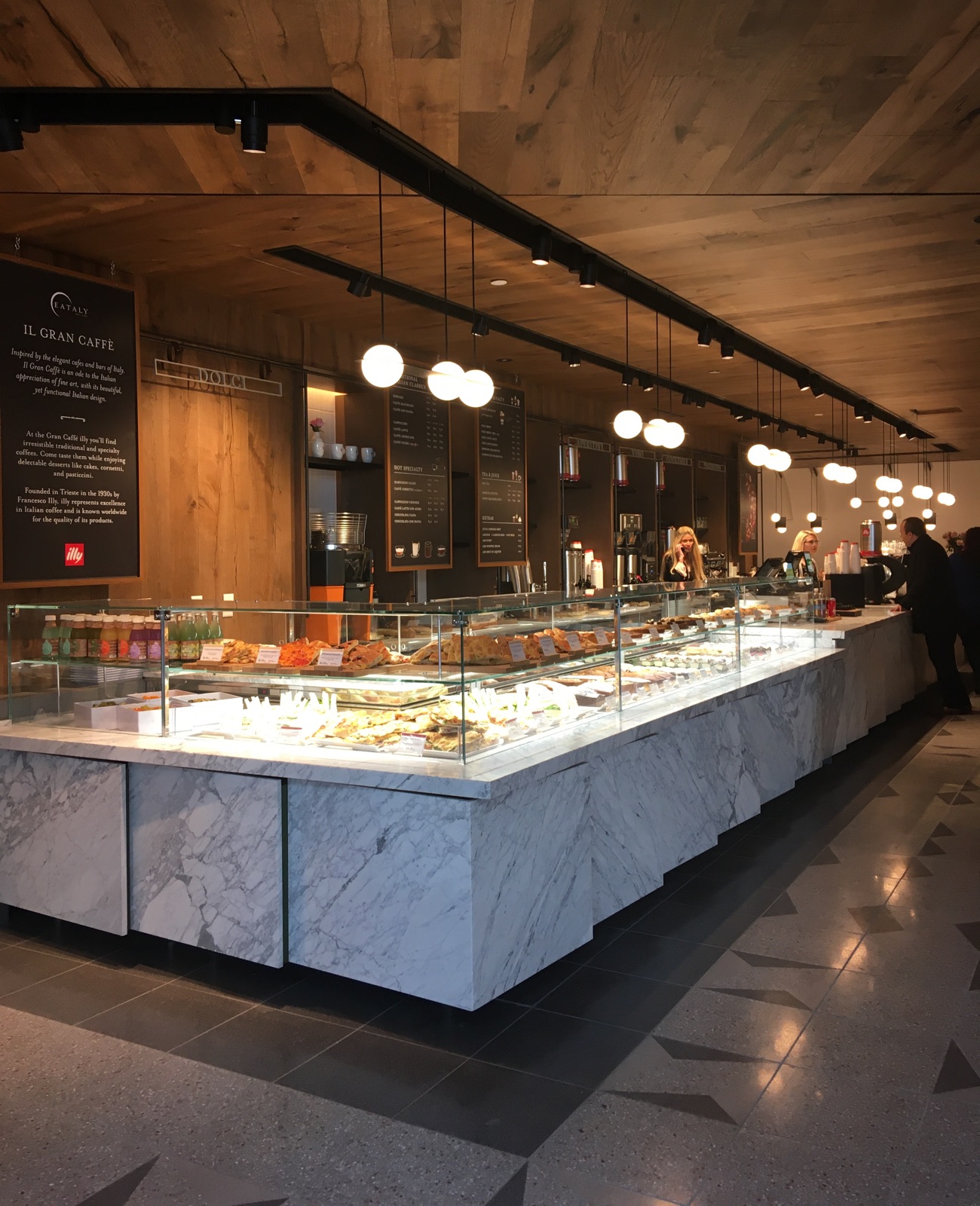 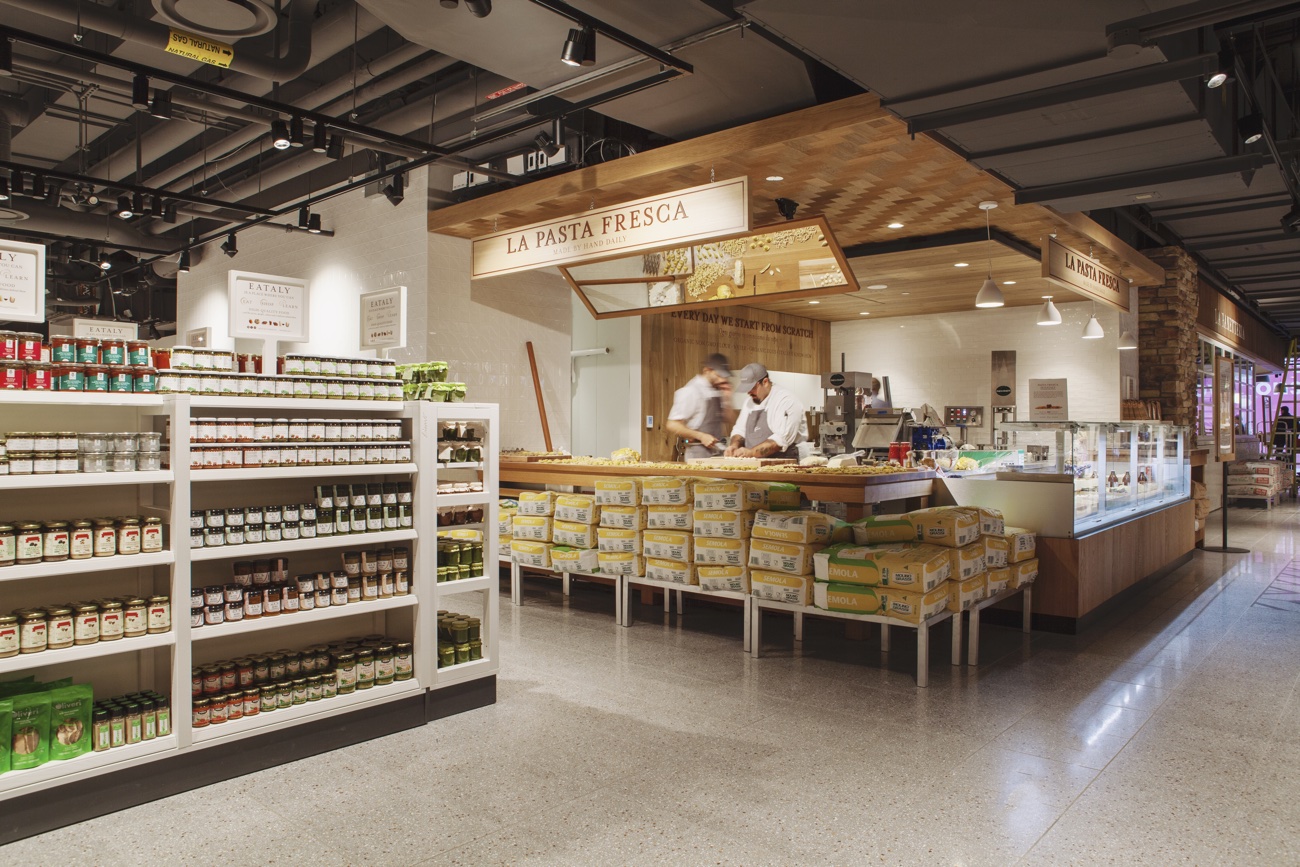 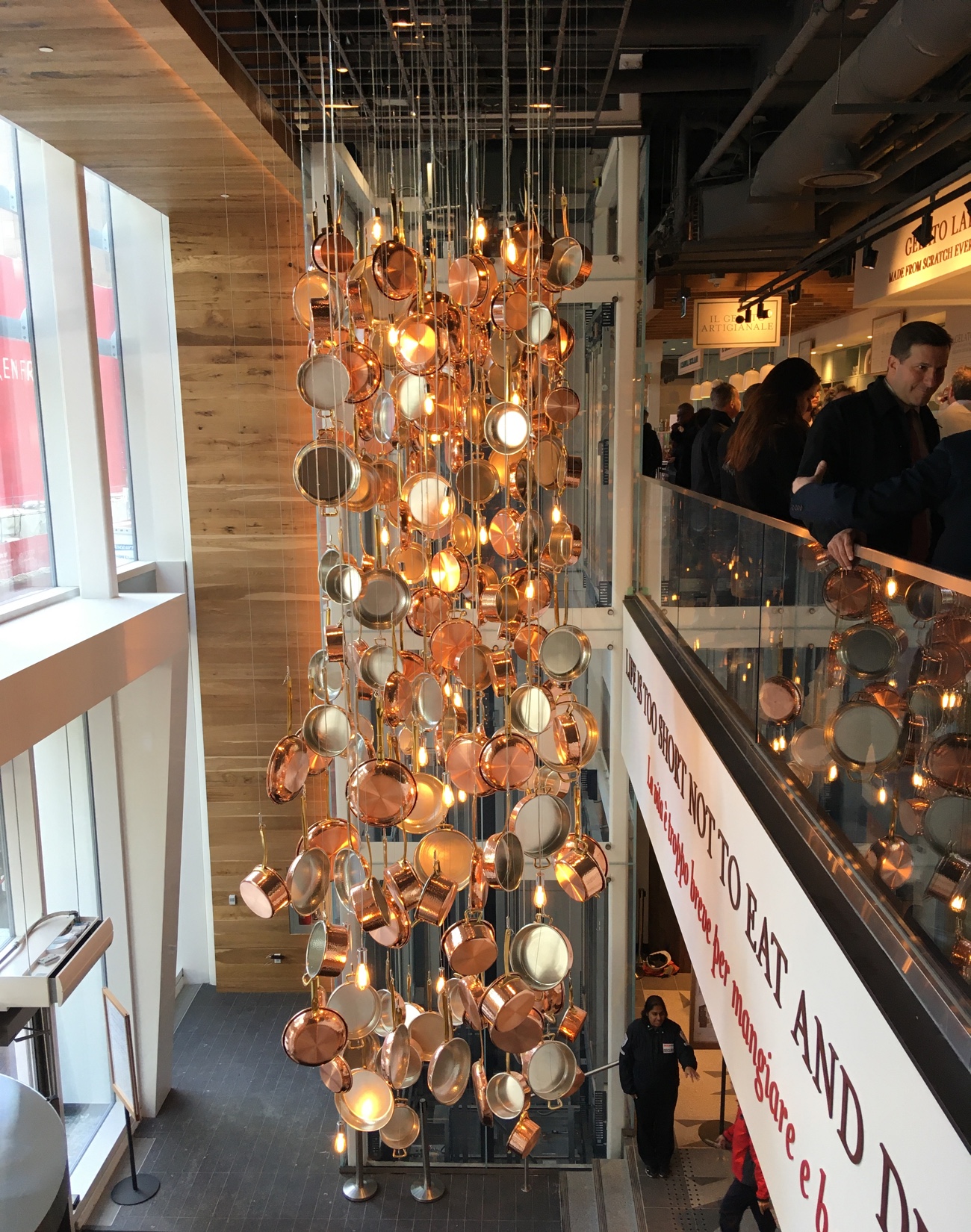 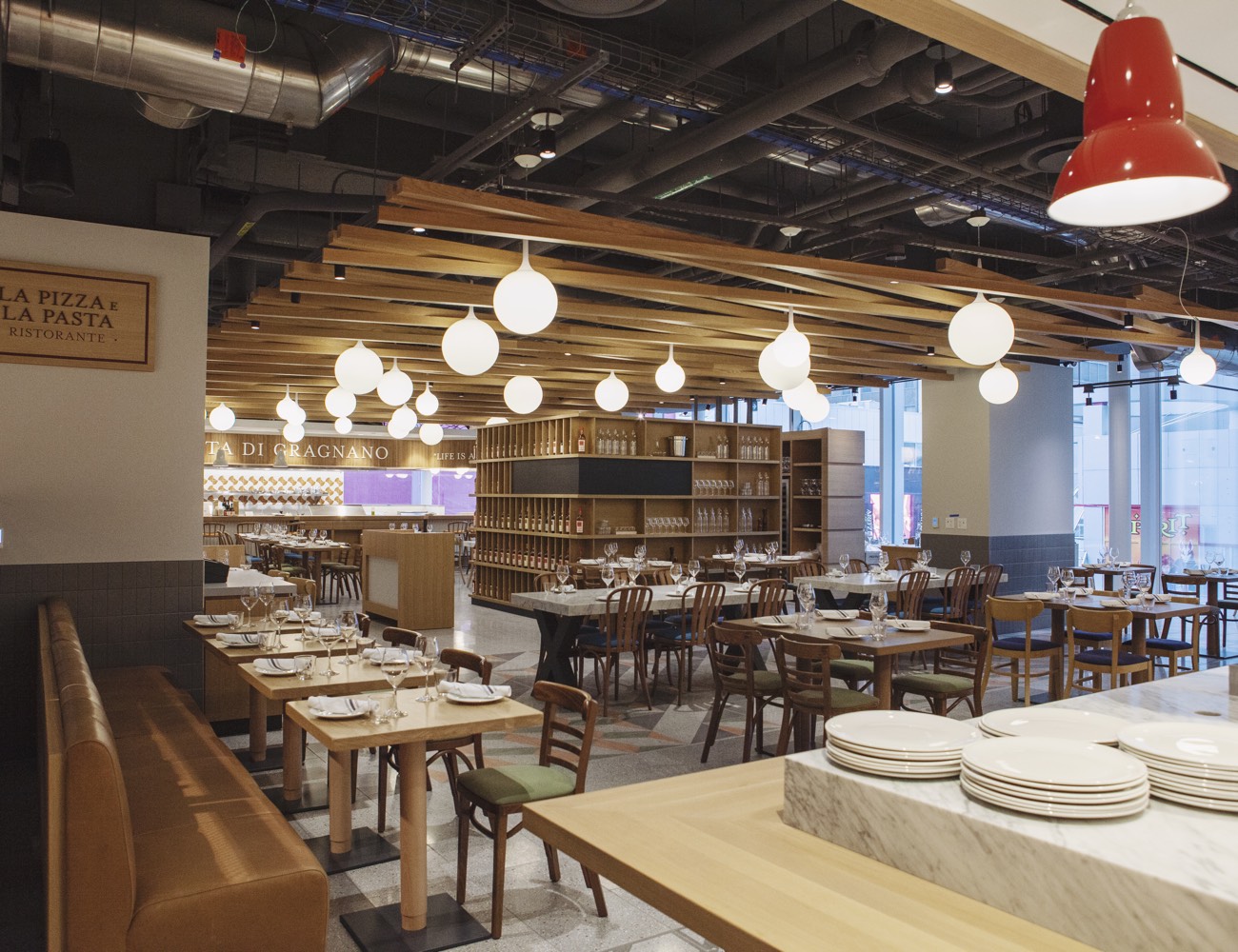 When Eataly Toronto opened its doors earlier this month, one thing was inevitable: crowds. Lots and lots of crowds. Two weeks later, there’s still often a lineup around the block at any given hour. The global brand’s built-in popularity has collided with the city’s food-loving energy to create a sure-fire success. But if the place feels jam-packed, that’s also because it was designed to be that way.

“The Eataly experience is a market — and we really took that to heart,” Ralph Giannone explains. “The question became: How do we create that hustle and bustle and joyous chaos of an Italian market?” Giannone Petricone Associates (GPAIA), the firm he runs with his partner Pina Petricone, is best known as the go-to design studio for Terroni’s high-spirited restaurants, but it’s also the architecture firm behind multi-unit residential developments and urban masterplans like The Shops at Don Mills. When it came to designing the Eataly Toronto flagship (the first in Canada and 40th worldwide), GPAIA approached the project with a well-earned understanding of the brand’s DNA, having brought the Copenhagen location to life and, even more important, having fine-tuned its Chicago location.

Eataly Chicago had originally been designed with roominess in mind, in response to complaints about the cramped condition of the exceedingly popular Eataly in New York’s Flatiron District. As a result, the Chicago location lacked the energy of a bustling market — the “secret sauce” of Eataly, as Giannone puts it — and GPAIA was brought in to add layers of scale and intimacy so that the Chicago location could level up to the high-octane feel of, quite ironically, New York’s Flatiron Eataly.

Each Eataly has its challenges – and its own theme. In Toronto, the three-storey, 4,645-square-metre location itself became controversial. Eataly’s massive storefront at the corner of Bay and Bloor is built into the Manulife Centre, a Brutalist architectural icon whose concrete shell recently underwent a massive facelift. Now sheathed in glass, the building’s street-level retail podium beckons passersby into Eataly with a suspended installation of copper pots and pans that cascades down the new double-height frontage in the shape of the Italian boot. If Eataly has blasted its presence on this central downtown node, its theme of multiculturalism pays homage to the city. It does so most vividly with an artwork by Oliviero Toscani — the iconoclastic Benetton art director created a mural of portraits depicting people from around the world.

This pixelated mural lines the wall along the escalator that leads up to the main market floor. The interior here has a donut configuration, with two long passageways connected to more spacious zones at either end. In GPAIA’s scheme, the walking strips and the capacious zones are translated into “passeggiate” and “piazze” — one piazza features the main bar, the other the pizza and pasta restaurant (with its gold-mosaic encrusted ovens), while each passeggiata features its own arrangement of produce stands and informal food stations, like the butcher, the fishmonger and the raw bar.

Their colliding canopies in vibrant canvas are designed to conjure those of Palermo’s historic street markets, and their points of expansion and compression are meant to encourage jostling and conviviality. The piazze are the main set pieces in what Giannone refers to as the theatrical program of Eataly. “We wanted to create that sensation of a festival happening in the middle of the piazza.”

This theatricality is key. Although the market is very much a branded environment, the firm devised a backdrop that knits in moments of material richness. “The ethos of Eataly is that it’s thrown together,” Giannone explains. “So, there’s a gentle balance between design and not-design. And there’s the risk of insincerity if it’s too designed.” The designed elements show that the magic is in the details, and at Eataly it starts with the floor. “It’s the best feature, but it’s very subliminal,” Giannone says. It was originally meant to be concrete, but GPAIA lobbied for terrazzo, a material that would patina over time and also allow for more creativity. Working with Grandinetti, a terrazzo supplier from Le Marche, the firm devised a custom pattern and colour mix.

The unique formula, of concrete colour pebbles with speckles of orange as well as decorative tiles of orange, green and grey, allowed the firm to disperse “carpets” around the market. “Where we want to heighten the experience, we put patterns. I think people feel it, but they don’t notice it,” Giannone says. “They’re off-centre, broken, some of the carpets look like they’ve been renovated and lost some decoration pieces and we just paved between them – I mean, abstractly.”

From there on up, GPAIA conveyed a curated warmth into the branded environment. Oak and marble are used throughout, but in unusual combinations. And finely executed elements focus the eye in what is otherwise a sometimes-overwhelming ambience: at the pizza and pasta piazza, carved wooden benches lead into the seating area and a ceiling-suspended installation of wooden boughs interspersed with Artemide pendants evokes a tree canopy. At the fresh pasta kiosk, the ceiling is edged in gnocchi boards. These touches, sensible and witty, create a more intimate sense of scale here and there across the market floor. (GPAIA executed the project with Govan Brown as the main fabricator and Unique Store Fixtures as the millworker.)

Eataly’s other levels provided GPAIA with more opportunities to craft an ambience. On the ground floor, Il Gran Caffe – with its bar surround in shiplap marble, floors in terrazzo and ceilings lined in oak – most emphatically recalls the firm’s style. The seating area at the back features a plaster half-vault ceiling carved with linear strips from which angular pendants drop. Below the cafe, on the concourse level, the 30-seat birroteca (a partnership with the pioneering Junction-based brewery Indie Ale House) features a weighty wood bar, finished in a dark stain and wrapped in unfinished copper panels that will acquire a patina over time. Still to come is the final space that the firm is designing: Trattoria Milanese, which will be located on the market floor, near the fish counter.

Eataly will always attract crowds. It will be a destination for fresh-made Italian goodness – from mozzarella and pasta to cannoli and gelato – a stimulating food market to stroll through with a glass of wine in hand, a place to nosh on pizza with a view of downtown, a destination for culinary classes (the Eataly cooking school is furnished with a snazzy Ernestomeda kitchen). But GPAIA has also made it a warm experience where finely crafted details encourage moments of contemplation amid the joyous chaos.