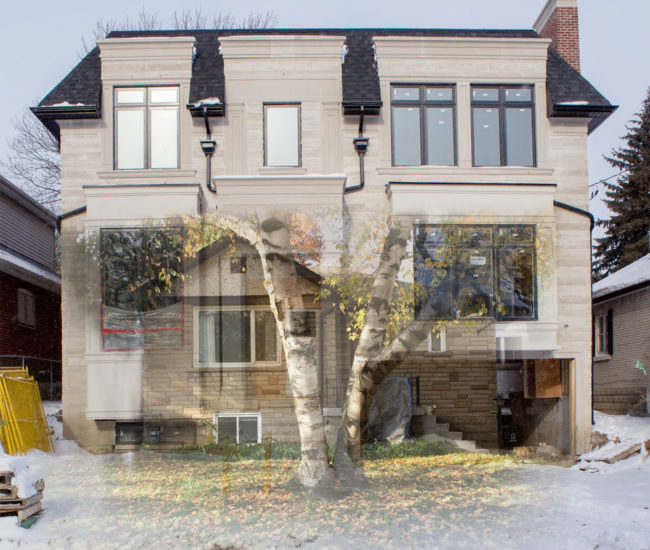 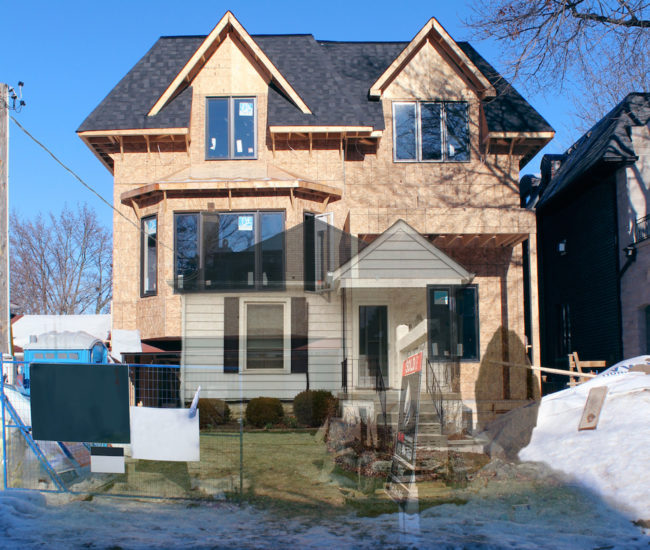 Ghosts of Monsters, a photography exhibit by Paola Poletto, reconsiders how “monster” homes have transformed the Toronto neighbourhood of Willdowdale – for better and for worse.

In suburban neighbourhoods, it’s easy to deride the new kid on the block. Especially when the new kid is a multi-storey, Neo-Eclectic infill with an intimidatingly long shadow.

McMansions, as these hulking dwellings are often called, follow a recognizable template. Cookie-cutter design features include non-essential columns, roof dormers without corresponding attics and bay-and-gable windows. Besides the requisite two-car (or more) garage, their facades are broadly derived from anachronistic architectural typologies. Think Modern, Victorian, Georgian and American Ranch, to name a few. On the inside, though, it’s all high ceilings and open concept floor plans. There goes the neighbourhood, right? 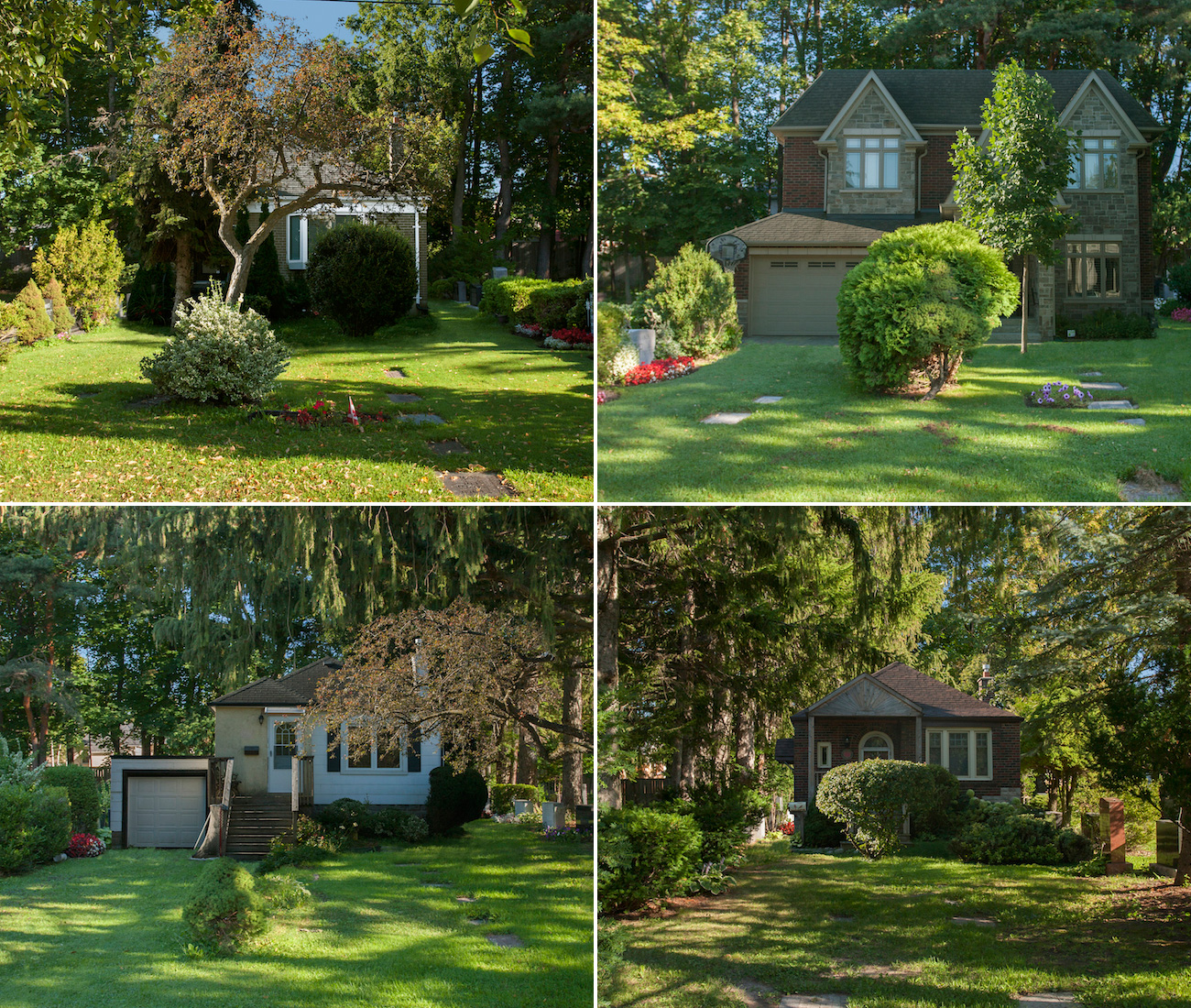 Well, “yes and no,” says photographer Paola Poletto, who spent three years investigating such transformations – and our underlying assumptions about them – in a one kilometre square section of North Toronto formerly know as Willowdale. Camera in hand, she captured low-slung postwar homes as they went on sale. Later, she returned to the same sites to photograph the inevitable “Monster” home that had sprung up in their place. She calls this series, Ghosts of Monsters.

For her, making composites from these “before” and “after” shots was a way of acknowledging the invisible re-writes in the neighbourhood. Otherwise, she says, “I would see a new home go up and have little to no recollection of the home that was there before it.” Redressing these gaps in her memory and the “strange erasures” in the area allowed her to make wider observations about the evolution of taste and cultural capital in the suburb.

Compellingly, her images challenge our notions of “heritage,” showing how neighbourhoods have always been in flux – home to indigenous communities, veterans and recent immigrants alike. Her second photographic series, ParkHome, brings this point further. Here, Poletto presents a composition of 55 abodes along one street, Parkhome Avenue, combining images of their facades with a backyard view of an adjoining cemetery. In this way, she returns the houses to their pastoral origins, while also referencing the diverse building styles on the street since WW2.

We caught up with Poletto via email to find out more about the exhibition Ghosts of Monsters on display this month for the Contact Photography Festival at Lower Gallery, Toronto Centre for the Arts in North York. 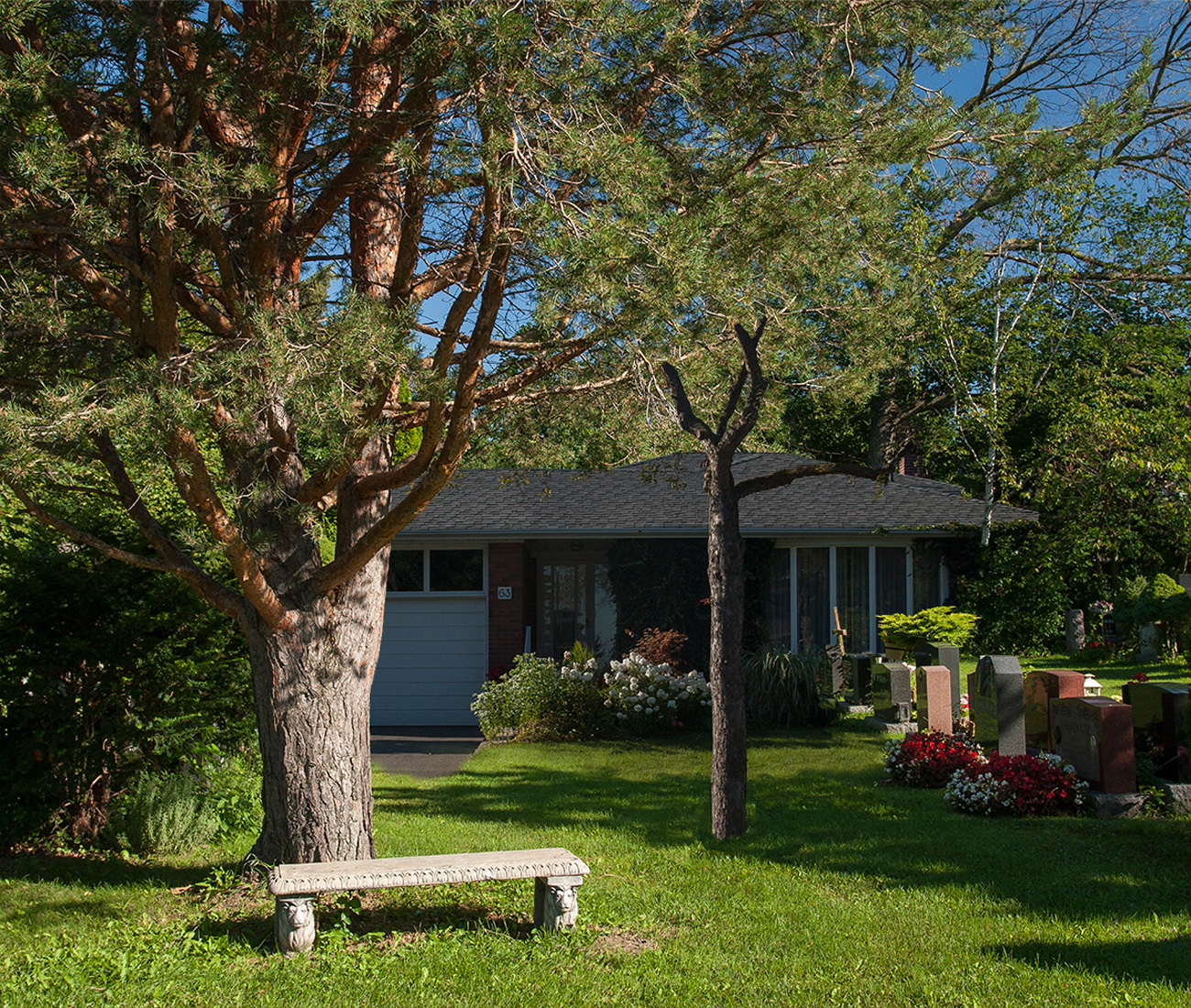 From the perspective of an architecture and design magazine, it feels easy to disparage the apparent tackiness of Neo-Eclectic homes. Is there more to the story than meets the eye?

Absolutely. My intention was to shift, through this documentation, my own biases and to look more closely at the architecture/build as a shift in cultural capital that is far more nuanced. It’s a reflection of neighbourhood demographics, individual choices and desires. It’s about fitting in, about taking up space and, in a way, a reversed gentrification. The diversity of the neighbourhood residents – and thusly housing stock – is far greater today than it was following World War 2 when much of the original housing stock was built. And in a way the cookie-cutter Canada Mortgage Housing Corp housing of the 50’s is being replaced by another cookie-cutter model (monster) home. Yet both reflect in their own way a desire for hope and prosperity.

Did you feel a pang of nostalgia for the prewar homes as they were either dwarfed or replaced by “Monsters”?

Yes and no. Yes because my father emigrated from Italy in 1951 and started his own contracting business soon after. He built some of the bungalows in Willowdale and often talked about the work of building with me. The truth is, however, that many are very small and need a lot of work. The series ParkHome illustrates the misconception that there are only postwar and monster homes that line any one street. What we have, rather, is a rich diversity of architectural styles, nods and periods living side by side. I also found that the pace of neighbourhood transformation was slower than what I had originally perceived. And I am responding to shifts in labour too. Today, many of the builders are Chinese and Persian for example, a reflection of the demographics of the neighbourhood today. 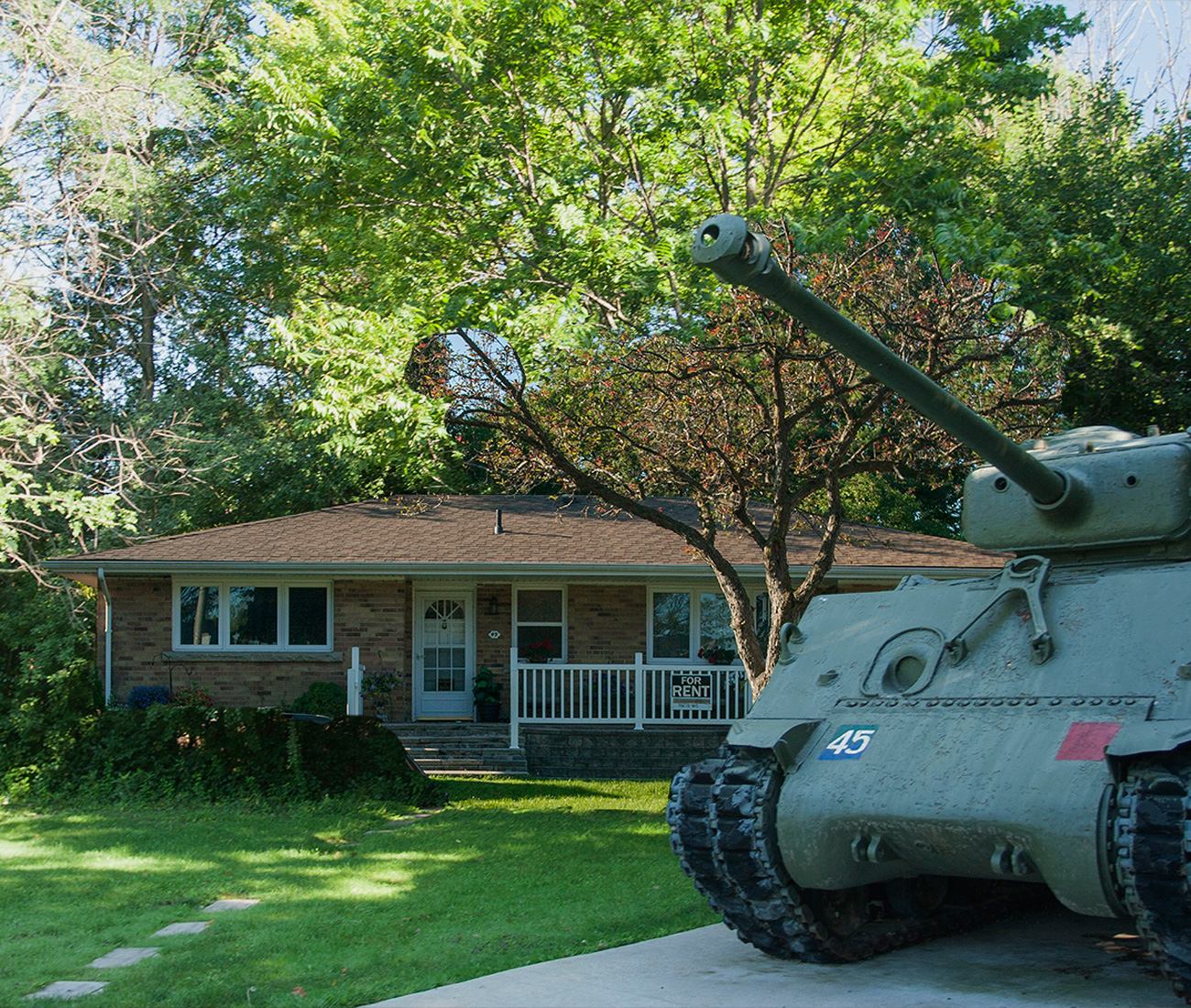 In your statement, you mention that you wanted to disrupt the idea of the colonial “heritage home” by highlighting the neighbourhood’s fluctuations over time. Could you elaborate on this?

Parkhome Avenue has 55 houses on the south side – and no two are alike. There is so much variation, both in build and in changes over time and occupation. In their uniqueness, I argue that each one is a heritage home with deep cultural and familial resonances. The desire for home is as resonant [today] as it likely was for the Gibson family, who acquired this land in the 1800s, and we acknowledge their homestead as a city museum. All houses resonate. Should resonate.

In your ParkHome series, you combine photographs of single-family homes on Parkhome Avenue with imagery from the adjoining cemetery. What’s the significance of highlighting this shared landscape?

The history goes deeper than those buried in our neighbourhood York cemetery. Positioning the houses within it however, changes the view of a house by giving it a pastoral setting not unlike a heritage museum house. No paved street or driveways. The upgrades of the fallen soldiers from World War 2 almost appear as stepping-stones to the front door. And the lush green trees return the land to forest and to the indigenous people who lived here before. That cultural resonance and deepened awareness informs and envelops us all.

Co-presented by North York Arts, as part of Scotiabank Contact Photography Festival and Doors Open Toronto. It runs until Sunday, May 27 at the Toronto Centre for the Arts’ Lower Gallery, 5040 Yonge St. Click here for more information about the artist and exhibition.