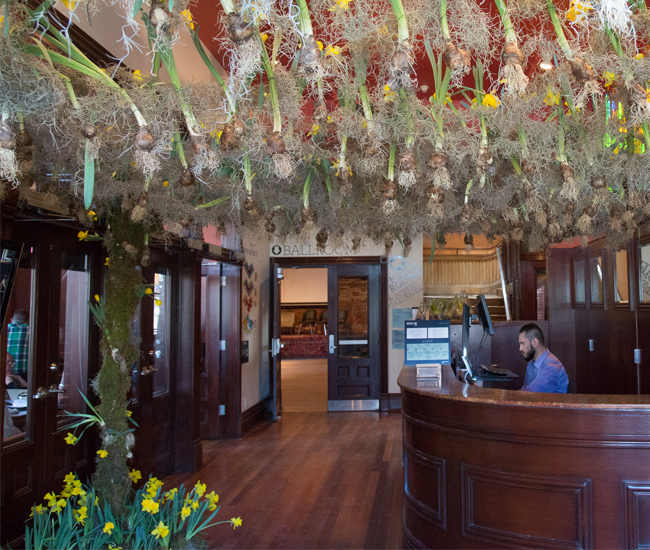 Just in time for Earth Day, the Gladstone Hotel cultivates the fourth edition of its cheekily-named landscape architecture and contemporary art exhibition

By David Dick-Agnew and Eric Mutrie
Photography by Jenny Morris

Curated by plant designer Graham Teeple and green-thumbed architects Christine Leu and Alan Webb, this year’s edition of Grow Op adopts the theme “Cultivate Curiosity.” Over 30 installations – contributed by a group that includes furniture designers, landscape architects, farmers and scientists – encourage visitors to rethink their relationship to both urban and natural environments. Here’s a look at a few of the highlights. 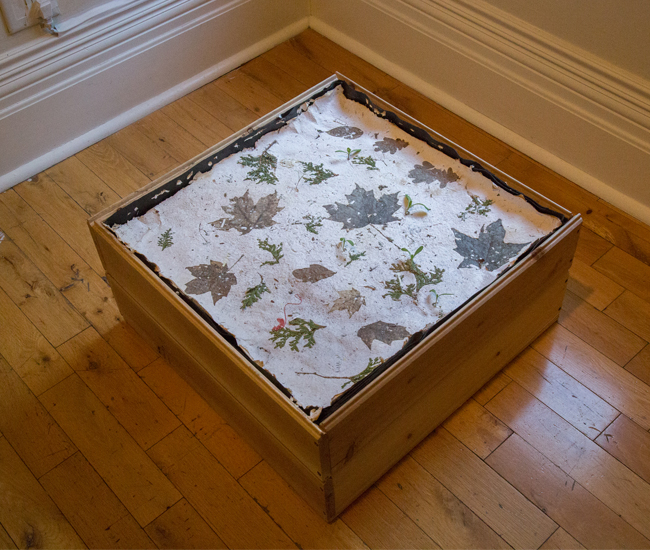 A quilt to remediate a former landfill
Two years ago, artist Christina Kingsbury began to hand-make large squares of biodegradable paper, embedding them with seeds collected from plants native to her hometown of Guelph, Ontario. She then sewed these squares together to create a quilt that would cover, in stages, the city’s Eastview Landfill. Placed in a particular sequence, they have seeded the land in an approximation of a quilt pattern; today, clumps of wildflowers continue to emerge and dot the terrain with bursts of white and pink.

For Grow Op, Kingsbury’s process is recounted using still photos, videos, and samples of the seed-embedded paper squares, and even poetry by Anna Bowen. 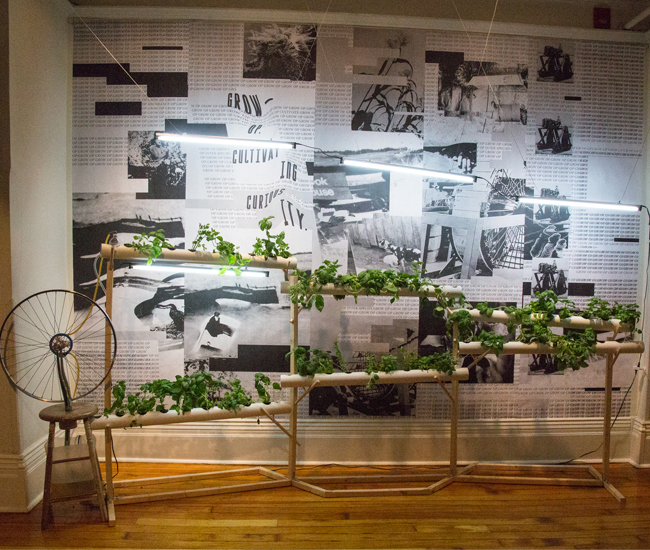 A soil-free garden system
Hydroponics is a method of growing plants without the use of soil. Known to accelerate growth, this method of gardening also has several ecological benefits. As hydroponic setups thrive indoors and involve no dirt, they require fewer pesticides and avoid topsoil erosion. By recirculating the mineral solution that it uses to feed plants, a hydroponic system can also reduce water usage.

For this installation, design collective DBG Studio creates a closed loop system that sends nutrient-rich water through a series of cascading tube planters before pumping it back up to the top level. Each tube is propped up on the branches of tree-like pedestals that could pass as tyke-sized Scandinavian coat racks. Made entirely from recycled materials, the setup proves that any environment can provide the right conditions for an attractive, productive garden. 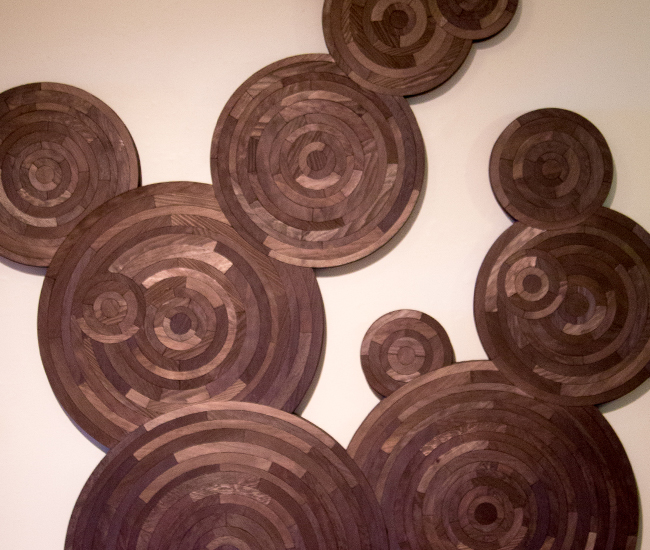 Putting wood at the forefront
Toronto’s Djuna Day Studio is known for meticulously assembled tables and credenzas, and like many woodworkers, Day feels that off-cuts should be reused, rather than discarded. Her solution is to rework small bits of wood into larger compositions like the one seen here, entitled Everything Seems Alright, Assemblage #10. Each curved piece of Douglas fir is cut along the grain, then dyed with a fast-evaporating solution that drenches the entire piece in black.

Because of Douglas fir’s high silica content, darkening the wood results in a charcoal-like shine that shimmers as the viewer’s perspective changes. The orderly arrangement of concentric circles speaks to our innate desire to transform nature into something we’ve engineered. 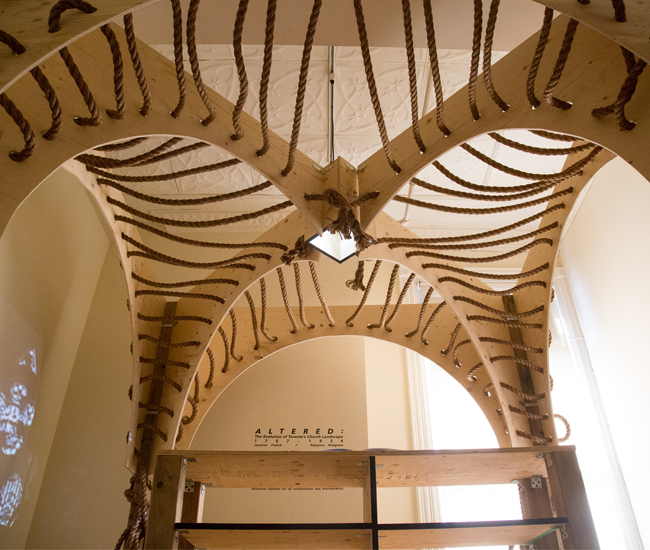 Decrypting an urban transformation
Landscapes comprise much more than just pristine nature, and Grow Op would be remiss if it overlooked the forces that shape the urban environment. For Altered: The Evolution of Toronto’s Church Landscape, urban planner Jasmine Frolick and artist Robynne Redgrave have selected five important structures erected during the years from 1979 to 1834. Their narrow focus highlights the era when large churches first began to appear in the Town of York – now Toronto – acting as catalysts for an emerging culture.

Displayed under a makeshift vaulted ceiling, the installation pairs video projection with an illustrated tome to show how Toronto’s first large churches were both the cause and the effect of important changes, and illuminating the ways that even a small handful of buildings can transform a city. 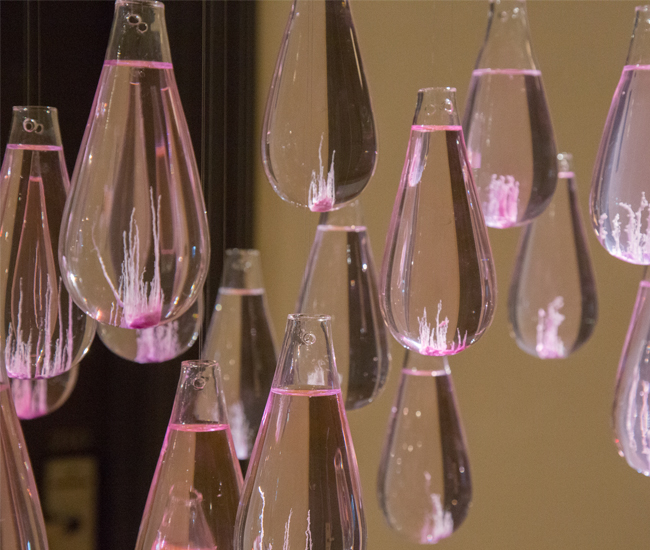 A mesmerizing science project
This installation by Michaela Macleod of Toronto firm Polymétis hangs a cluster of teardrop-shaped vessels at eye level to spotlight the chemical reactions playing out around us. Inside each one, a solution of metal salts, sodium silicate and manganese (II) chloride produces bright pink crystals that will be familiar to anyone who experimented with a kids’ chemistry set.

As these formations continue to grow over the four-day exhibition, they inspire a fresh appreciation of various natural phenomena: seaweed dancing underwater, ice sheets that form atop frozen lakes, and sap dripping from maple trees in the spring.