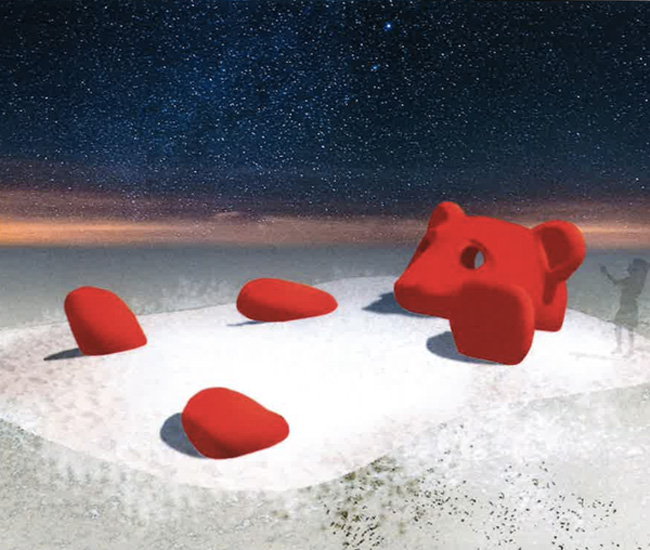 Magical winter installations return to the city’s Waterfront for Ice Breakers 2018, the most thought-provoking outdoor exhibition you’ll see this side of the equator

Come on pretty mama, let’s go to Aruba, Jamaica or Bermuda this winter. Or, say, the Waterfront?

Here’s why: Queens Quay West is the only place you’ll get to see a giant red-coloured bear relaxing in the snow. It’s also where you and your friends can compose a symphony by wandering through curtains of wind chimes, and if you’re a parent, watch your kids tackle a chaotic ‘jungle gym’ constructed from painted bamboo sticks.

Plus, as long as your parka stays zipped, this is the vacation spot where you won’t need to worry about your beach bod (not that we think you should worry, ever, about your bod).

We’re talking, of course, about Ice Breakers, an annual temporary outdoor exhibition of art installations that will dot the Waterfront between York Street and Spadina Avenue.

The competition, which was named for the heavy-duty ships used to break up chunks of ice in the harbour, thus allowing commerce to flow freely into the city, is a collaboration between the Waterfront BIA and Winter Stations.

Beginning January 19, see this year’s five winning entries from creatives based in Canada, China and Portugal. Their interactive public art works, seen below, revolve around the theme of ‘constellation’.

With much fanfare, multifaceted designer Thena Tak creates clusters of rotating fan sculptures through which the public is encouraged to meander, and engage with the snow-covered landscape.

From a distance, Root Cabin looks like a pile of weathered wood, sticks and roots. But gaps in the mound allow coloured timber to peek through, inviting wanderers to enter a hollowed, if not hallowed, space that evokes Canadian winter dwellings.

Architects spark dialogue between their buildings and urban dwellers every day, but this piece adds astronomy and music to the conversation. As visitors walk through curtains of wind chimes, they create a beautifully abstract soundtrack for the city.

Here’s a rare opportunity to walk across the belly of a bear. Inspired by Ursa Major, also known as the Great Bear constellation, this work uses renewable, recyclable and compostable materials to highlight the way we treat animals. Our cuddly teddy bears, as the installation shows, are also the victims of environmental mismanagement.

As with beauty, black bamboo’s cubic shape is in the eye of the beholder. Made from black bamboo poles in a free-form arrangement, the installation asks to be climbed and viewed from a far. Depending on the position of the participant, it either looks like a human-made square, or else disassembles into an abstraction.

See? We told you this was going to be a great staycation.