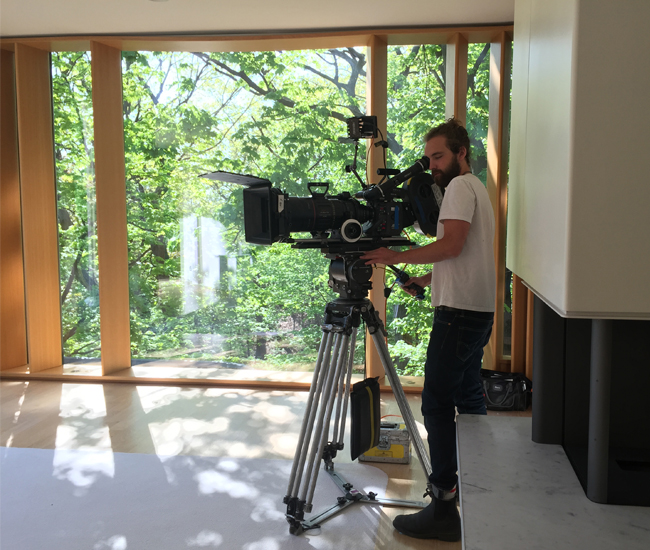 A Q&A with filmmaker Joseph Clement, director of “Integral Man”

The late Jim Stewart amassed a fortune writing Calculus textbooks. Then he enlisted Shim-Sutcliffe Architects to design him a striking modern palace that unfolds with the elegance of a precise mathematical equation.

Integral House is part home and part music venue, conceived to allow Stewart to host intimate concerts often held as fundraisers for the causes that were dearest to him. White oak fins on the performance space’s sweeping glass walls frame views of the lush Rosedale Valley that would leave any guest mystified. Photos of the house are extraordinary – but documentary filmmaker Joseph Clement realized on his first visit that even those don’t do the project any justice. And so he set out to capture it on film. He wanted to present not just an ode to the structure’s beauty, but also a portrait of its thoughtful owner.

Clement’s project took on new urgency in 2013 when Stewart discovered he had multiple myeloma, a blood cancer. In November of the following year, three weeks before Stewart died, our sister magazine Azure visited the home with Clement and architect Brigitte Shim to hear his final reflections on one of the city’s most acclaimed pieces of architecture. Since then, the house was sold to new owners who have said they will not make any alterations, and will continue to make the space available to charitable organizations.

“Integral Man”, Clement’s finished documentary about Stewart and his home, premieres at the Hot Docs film festival next week. We caught up with the director to find out his take on what makes this residence so cinematic.

What was your introduction to Integral House?

I saw construction photos of the house while I was working in New York City for a landscape architect and friend of Brigitte Shim’s, Ken Smith, and it totally blew my mind. I went back to my desk and thought “What am I doing with my life?” I quit my job to do an MFA and ended up studying documentary. I re-met Brigitte after I graduated and said to her, “You changed my life.” She invited me to visit the house, and when I went to see it and met Jim, I was just so struck. I thought, “This needs to be a documentary.”

When you first go into the house, it totally physically changes you. It’s like going into somewhere that you know you maybe shouldn’t be going into. You hold your breath. It’s vast, but it feels cocoon-ish. There are all these stepped terraces and balconies – it’s like an internal landscape in that way. Surreal, and yet real.

How do you describe Integral House to someone who’s not familiar with it?

You couldn’t describe the house without describing the man who commissioned it. Often times I start by telling people, “So there was this world-renowned Calculus mathematician…” You have to know Jim, and then it makes the house even more remarkable because there’s this incredible person behind it. A lot of the description comes out of the individual.

How does the house reflect Jim?

It’s a house that is subtle and bold at the same time. The majority of the palette is these soft earth tones – rusting steel, and white oak fins, and limestone floors. And then you have the blue glass staircase. There are calm aspects, and then bold insertions. It’s like Jim. He was the classic, quiet math professor, but he used to get dressed up in gowns and makeup at these incredible, over-the-top drag parties. There was a great duality to his character, and that speaks to the house as well.

Even while he was planning his wake, he realized “This is ridiculous – why am I not going to be here for this?” So he planned it so that he could attend it. He held on for that, and then declined very rapidly afterwards.

What changed about your approach to the documentary after you learned Jim was dying during the filming process?

Jim remained really committed to the project. He wanted to share the home. Architecture students would walk up to the house and peer in the windows, and if Jim saw them, he would invite them in and let them wander around and explore. Everywhere. Into the master suite and the master bathroom, even. He was completely open about it. He considered Integral House and his textbooks as twin legacies.

I’m happy that I can bring his legacy to light. He was a very important Canadian who did a lot to help change the culture in Toronto. He was a supporter of many causes – the LGBTQ community, for one, and children in Africa whose parents died from the AIDS epidemic. People who met at Integral House went on to set up charities together. The fundraising going on in that house was incredible. And Jim ensured whoever he let into the house for fundraising was doing so for worthwhile causes. He wasn’t someone who just wanted drunk celebrities wandering around his home.

How did the house surprise you as you filmed it?

Since my first visit, I’ve been going back and forth there for about five years. And I would say it was only after about the third year that I stopped noticing details. Every time I turned around, I’d see a miraculous moment. I’d realize that the shapes of a lot of the railings are integral signs, and the shape of the balconies are integrals. The dividing line between the limestone and the flooring is an integral. It’s a home full of interesting reveals.

It’s also a house built around the idea of light being the creator of space, so the way that light moves around is such an important part of how the place is understood. In order to document the subtleties of light, we realized that we really needed to shoot on 35mm. We shot all of the architecture – about half the film – on 35mm.

What are you hoping your audience takes away from this film?

A film like this is a great way to open people’s eyes to what can be done. The architecture world in Toronto is very conservative in a lot of ways, and people with a lot of money don’t take risks in building their homes. Risks both in terms of what a home is as a piece of architecture, and in terms of what it is as a programmatic space – what it contributes to a community. Jim was a counterpoint to that. He was a bold, visionary thinker.

There are some architects that criticize Integral House as ridiculous and over the top. But was the Empire State Building not ridiculous and over the top? Was the Parthenon not? There’s a strange contingent that don’t like it just because of what it is. It seems petty and small-minded. There needs to be more willingness to push things further. To all clients in Toronto: think a little bit bigger.

This interview has been edited and condensed. 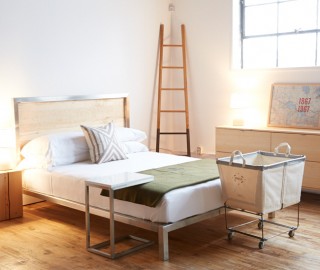