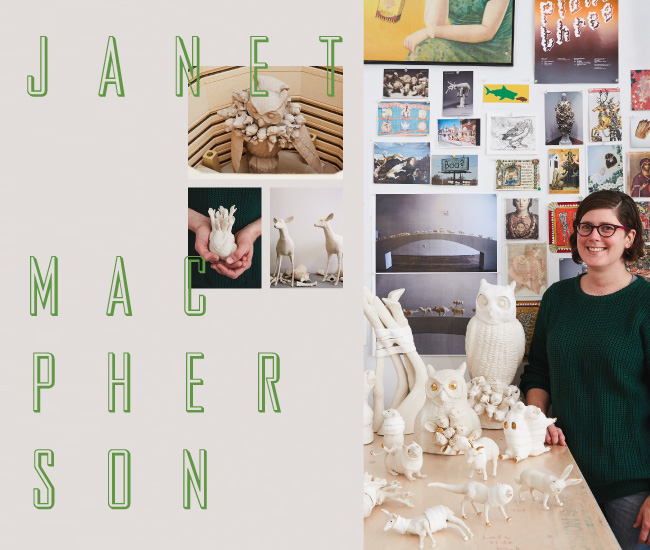 Dozens upon dozens of plaster moulds line the shelves of Janet Macpherson’s studio on Geary Avenue. “Rat tail”, one reads. “Sheep head”, another, and a concise but slightly troubling, “Arms”. The Barrie-born artist is preparing for her next exhibition at the Gardiner Museum, and nearly every surface is covered in her signature spliced ceramic animals, the haunting figurines she’s been engineering since 2008.

Macpherson focused on pottery characterized by its sgraffito technique for six years before a mould-making class (taken while completing her MFA at Ohio State University) sparked her departure from functional pots. “It resonated immediately as the way I was supposed to be working,” she says.

Macpherson built a catalogue of partial animal moulds using dollar-store toys and hunting decoys, then connected the body parts to create new species, each defined by its disquieting yet elegant air. It wasn’t until she noticed the protective canvasses worn by the farm animals at the Ohio State Fair that she began creating paper-infused clay wrappings for her own livestock. An intersection of bandaging, masking and binding, “it’s interpretive whether it’s something that’s healing or constricting, and it varies animal to animal.”

For Pilgrimage, an installation that debuted at La Biennale de Montréal last October, a parade of bandaged sheep-rats, goat-otters and horse-birds march toward a statue of the Virgin Mary. Judeo-Christian iconography and biblical motifs captivate Macpherson’s critical eye and, like parables themselves, the animals are stand-ins for humans. “People are drawn to animals,” she says. “You can do more with them conceptually without being too didactic or literal.”

Only occasionally breaking from their stark white palette with a black-and-white carving or gold lustre, the beasts mesmerize with both their astonishing detail and, when herded, their sheer number. “It’s a funny relationship between these mass-produced objects and what I make from them – these very singular, one-of-a-kind pieces.”

See Janet Macpherson: A Canadian Bestiary at the Gardiner Museum February 16 to May 21.