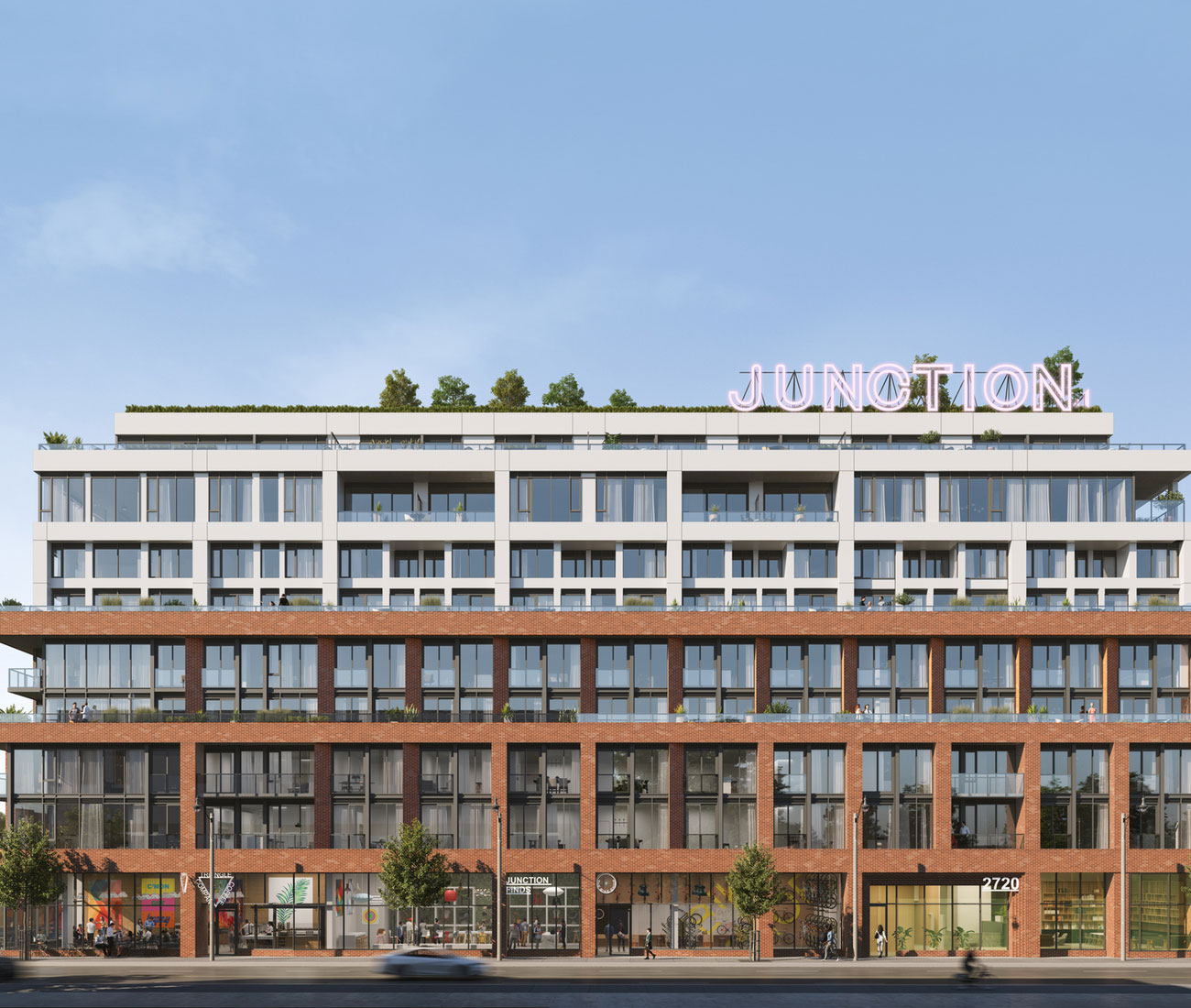 Junction House, a mid-rise Superkül project defined by spacious units and two-storey dwellings, is based around the concept of Canadian minimalism – and wants to add thoughtfully designed housing and a bold neon sign to the neighbourhood

Many consider the Wallace Pedestrian bridge – which is, along with Riverdale Park East, the best place in the city to catch a sunset – the unofficial gateway to the Junction. But in reality, the Junction begins several blocks northwest, marked by a decidedly less striking sight: a billboard. But Junction House, a Superkül-designed mid-rise located where Dundas, Annette and Dupont converge, wants to give the Junction a more striking gateway. Namely, by adding a glowing pink beacon atop their newest condo project, Junction House, announcing that passersby are close to (or just departing) downtown.

“The idea of the sign being a public art component was discussed. The idea was that it could be a marker,” says Andre D’Elia, principal at Superkül. “If you’re on the GO Train or the Union-Pearson Express, it becomes a point in the city you recognize.”

That sign, however, isn’t the only thing that catches you attention: as Dundas West swings northwards, the building – which first appears as a solid mass – begins to dissolve, with angled brick piers giving way to a glassy body. Sure, it’s handsome, but it’s also the type of thoughtful development many say the city needs: rising nine storeys with 144 units, Junction House is a mid-rise slated to rise on an infill site. It’s located on a major artery, close to myriad transit connections. And it’s in an established neighbourhood, with with retail, groceries and parks – High Park, in fact – close by. 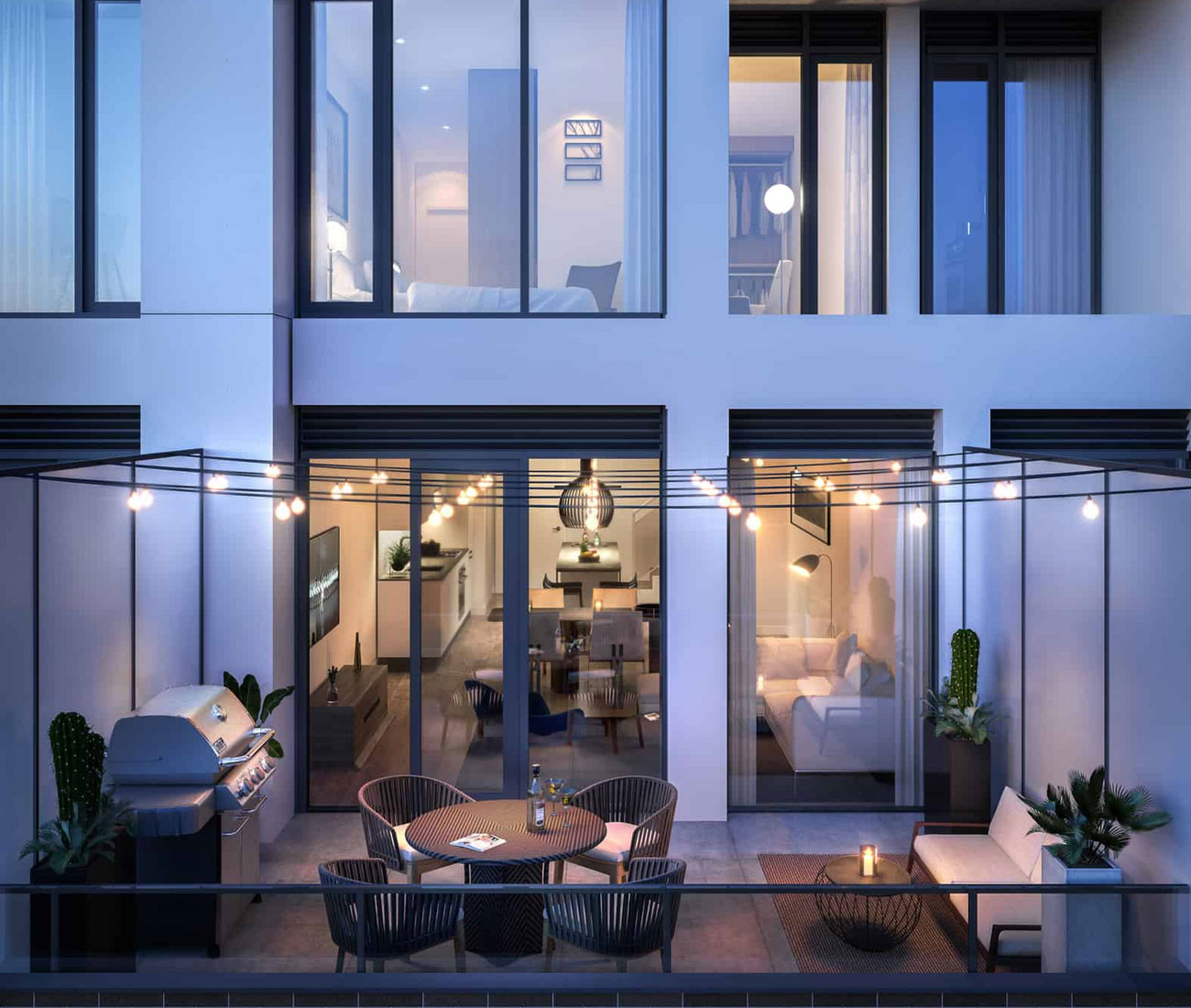 Mid-rises like these, says Brandon Donnelly, vice-president of development at Slate, the project’s developer, are relatively rare, accounting for only 12 per cent of Toronto’s new-condo builds last year. “It creates inefficiencies from a development standpoints,” he says. “There’s going to be 60 different unit types on this project. But you’re creating units that are focused on livability. You’re creating real housing.”

Superkül’s D’Elia echoes that long-term liveability was essential, adding that Junction House was designed “from the inside out.” Two-storey units, with bedrooms on their upper floors, make up the building’s sixth and seventh floor and line the site’s laneway (“We wanted,” D’Elia says, “to explore ways to animate the lane without putting retail there.”) On average, Donnelly says, these units are 1,100 feet, and feature separated living-dining spaces, access to outdoor space and gas connections for barbecues. While many multi-bed condos are laid out like college dorm rooms – including the dreaded bedroom without a window – the Junction House’s two-storey suites hew closer to Superkül’s renowned single-family homes. 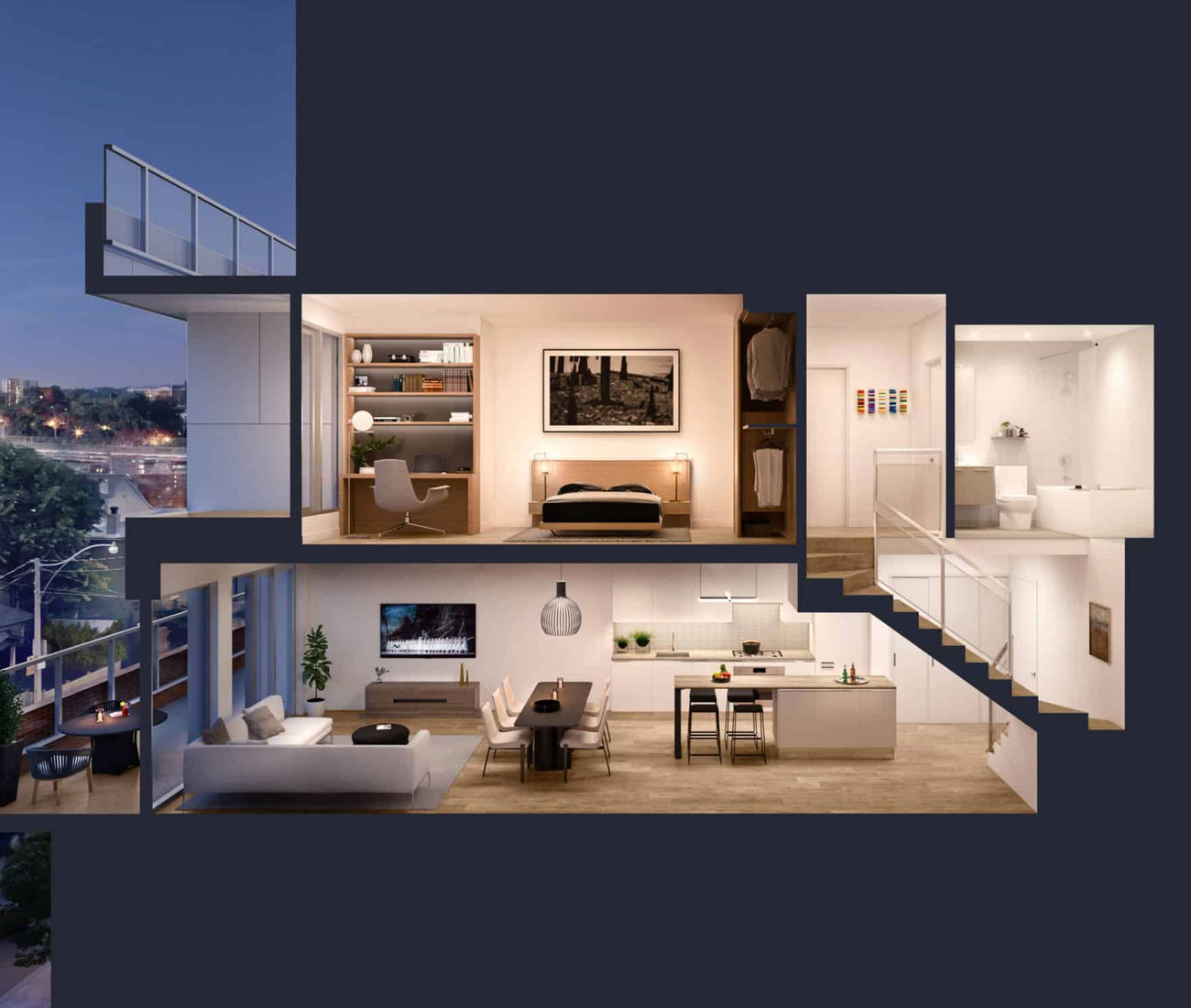 Access to natural light was a priority for Slate and Superkül, but that posed a design challenge: many low-rise projects are squat, as opposed to narrow and tall, which creates deep floor plates. Providing access to windows can be hard. So, for two-storey units, living spaces occupy the first floor, while two bedrooms are “Tetris-ed” onto the second floor (above). Some one-bedroom units feature inset bedrooms – an unfortunate reality of these building types – but are compensated with larger-than-normal living rooms (below). 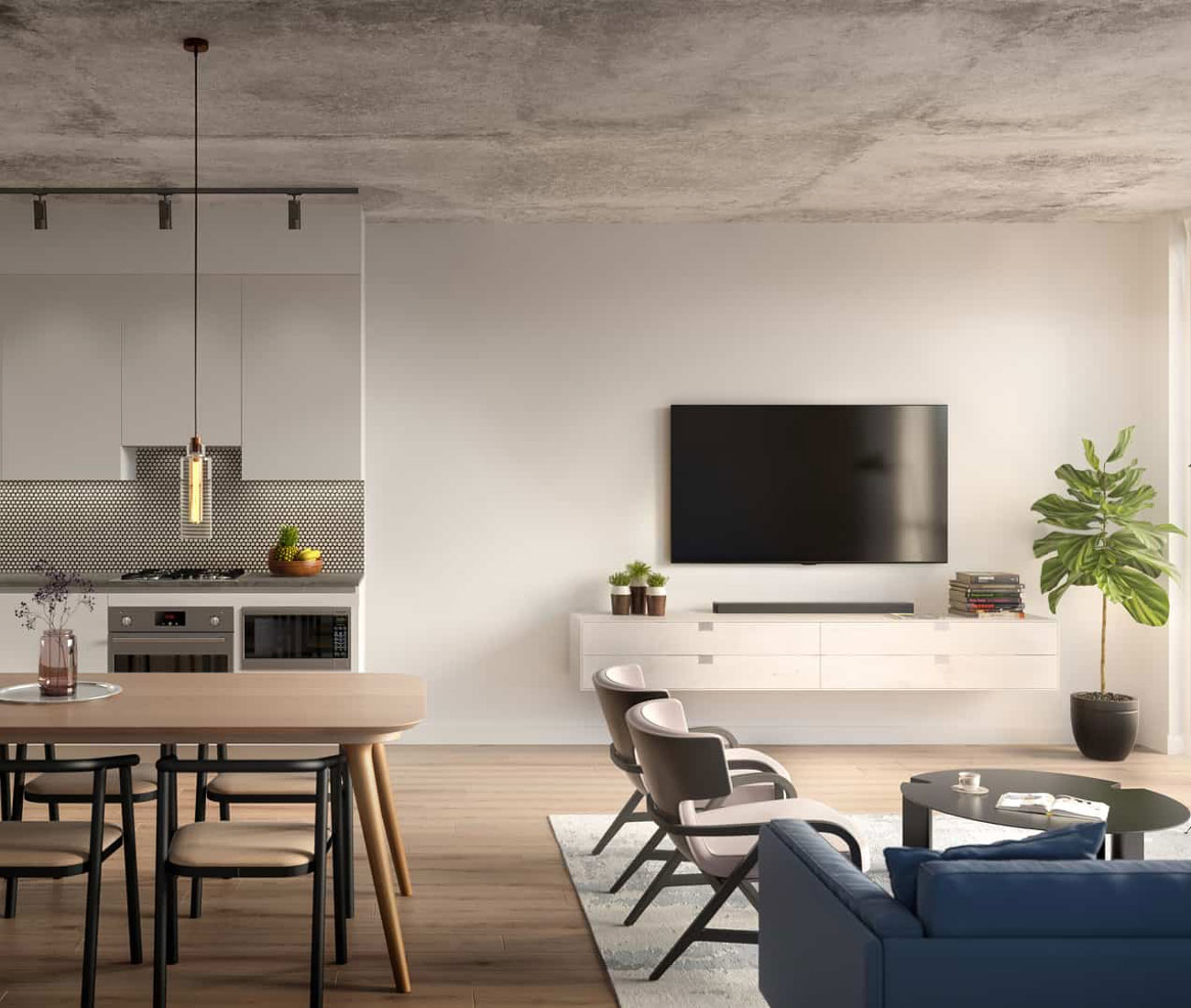 Amenities were kept minimal but useful – a pattern in many of the area’s mid-rises – with a gym, a Dundas St. W.-facing private co-working space and a 4,000 square-foot rooftop. There, the proposed neon sign will frame views of the Toronto skyline (below). It’s a nice touch, to be certain, but most of Junction House’s features shoot for utility.

“We’re known for our single-family residential work,” adds D’Elia. “We took that idea of home, and the proportions and spaces of homes, and we brought that into this building type. We’re really conscious of also how, in terms of our houses, even though they’re quite distinct, they fit into the neighbourhood. They don’t yell for attention.” 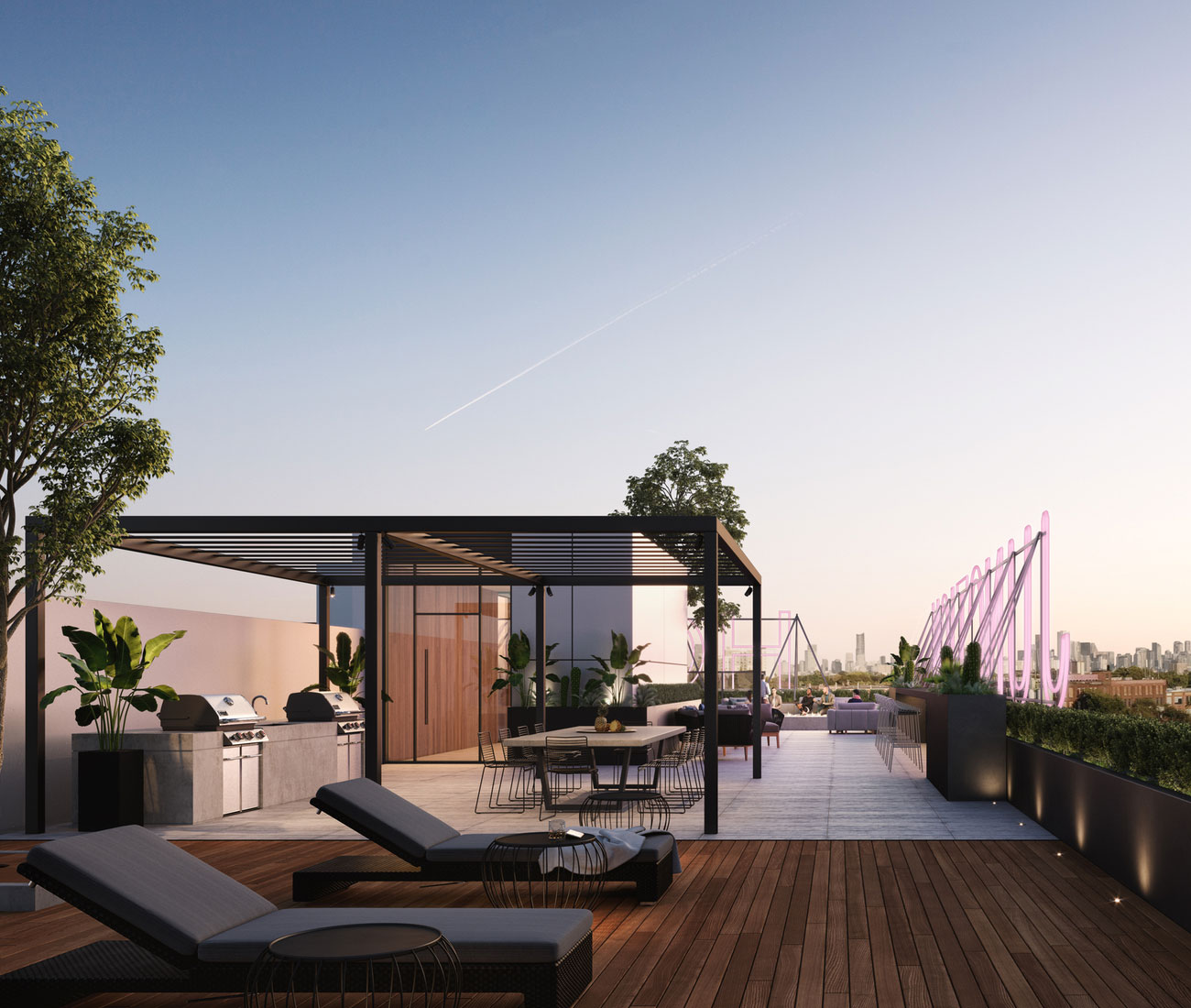 Not “yelling for attention” also emerged a priority for Junction House. So much so, in fact, that Superkül and Slate designed the project around the concept of Canadian minimalism, inspired by uncluttered, contemporary design that nods to its surroundings. The concept carries over to the project’s interiors, helmed by local studio Dialogue38. “We wanted to create our own varietal of minimalism: a lot of people talk about Scandinavian minimalism, or Japanese minimalism, but we don’t want to do that. We wanted to do something that’s more local and contextual,” says Donnelly. 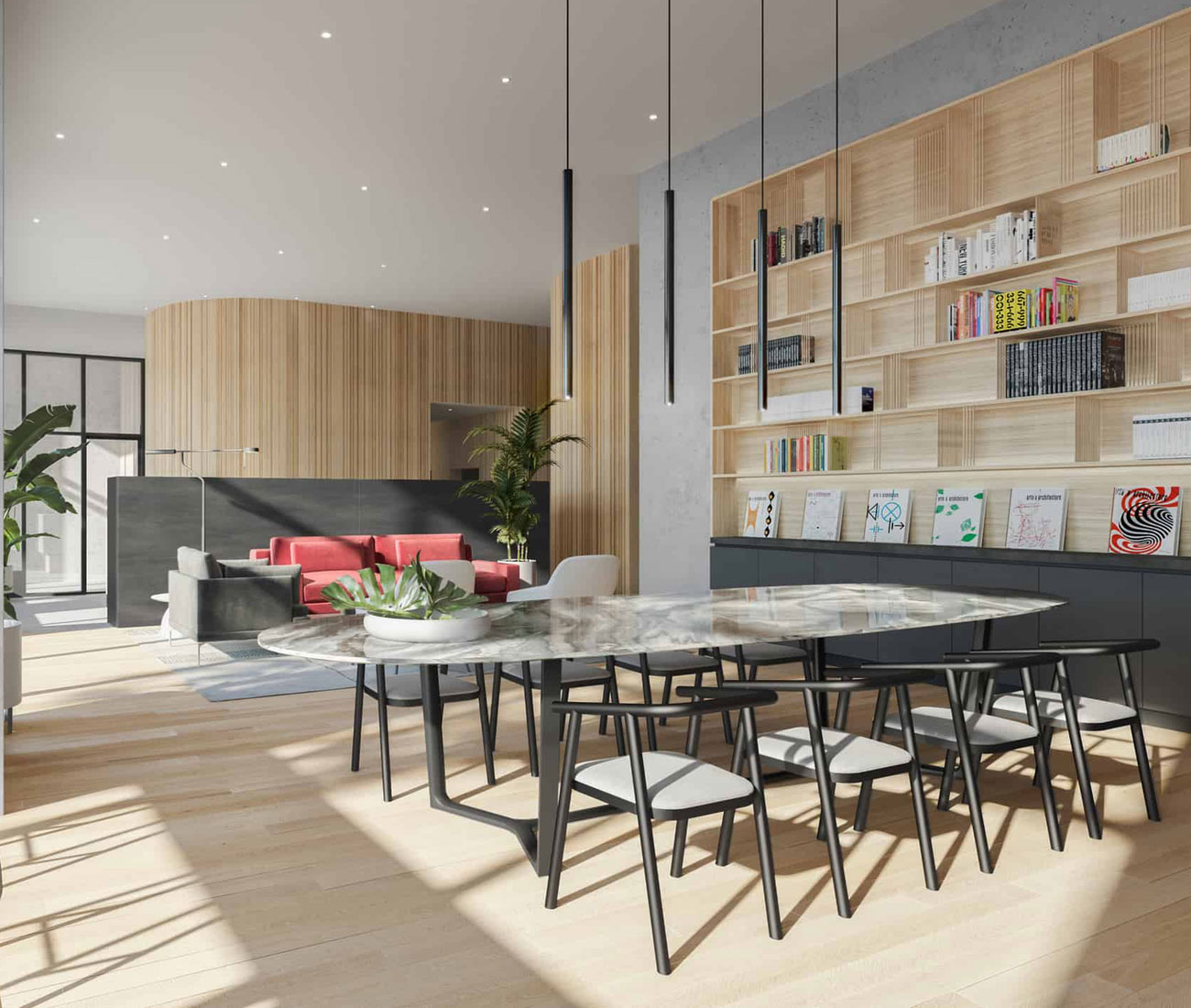 The neaby Mjölk, a longtime Designlines favourite, is namechecked as an inspiration, but it’s hardly the only one: D’Elia says he wanted to develop a “factory-like expression” for the project, inspired by the Junction’s plain-as-day industrial roots. Its first five storeys are red brick, anchoring the building to the street; as it steps back, it gives way to white brick. “We started to look at the context, the neighbourhood and the street, and we were immediately drawn to red brick,” says D’Elia. “It felt appropriate for the Junction.”

Despite its eye-catching neon signage, the word D’Elia uses – “appropriate” – may describe the project best. Sure, it’s darkened windows nod to the factories that line the nearby train tracks. Yes, Superkül studied the datum heights, the rhythm and size of nearby structures. Indeed, Donnelly reveals that several people asked if Junction House was actually built atop a heritage building. But this project, like the neighbourhood itself, isn’t simply a product of the past: it looks to tomorrow, adding well-designed, context-sensitive housing to a city that desperately needs it. That, and the sign rules.

“We wanted the building to stand on its own strength, but also be part of the neighbourhood in the long run,” says D’Elia. “We wanted a building that, once it’s built, felt like it always wanted to be there. Not just something that bullied its way in.”