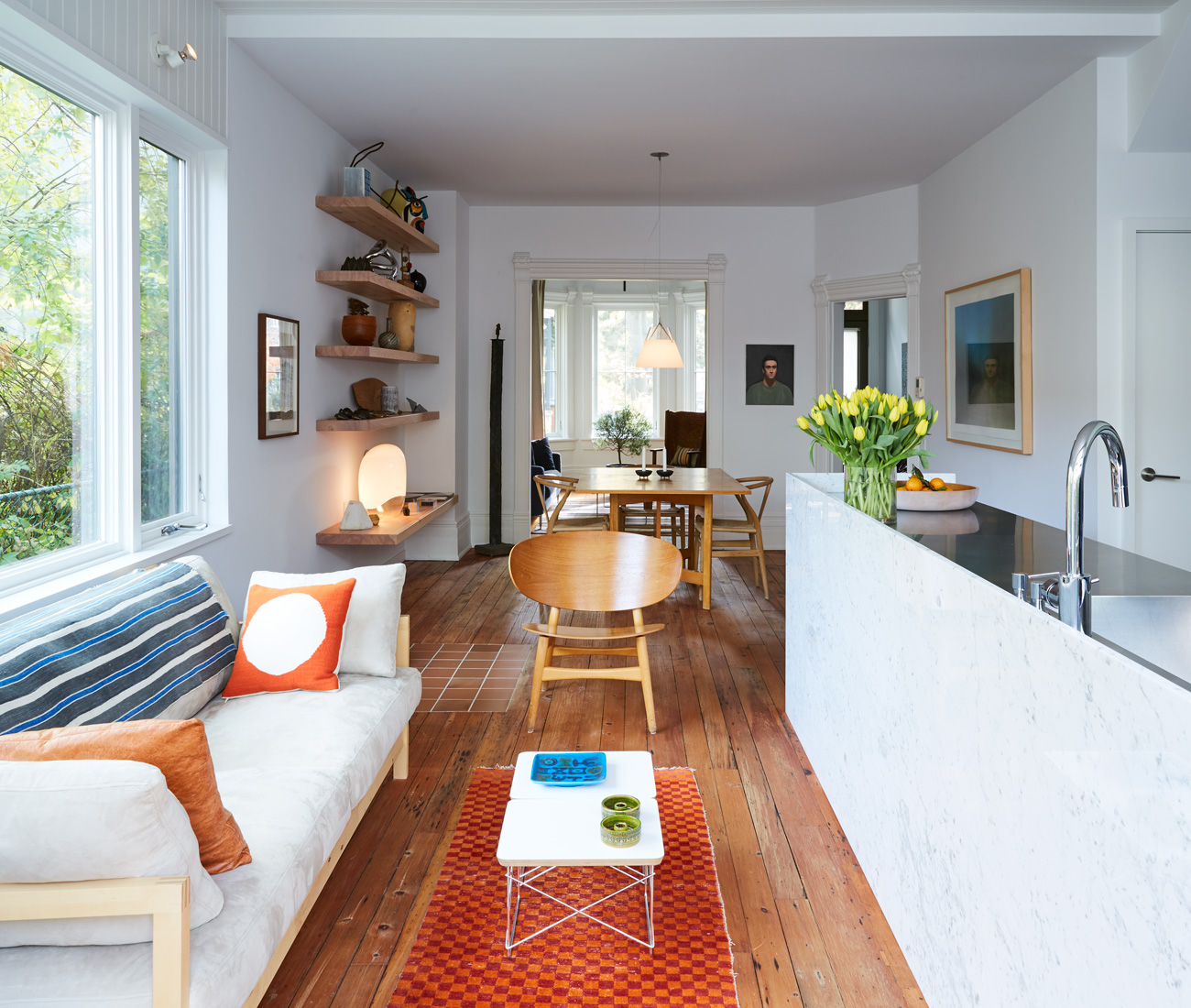 Jones rebuilt the north end of the house, installing a picture window (from Marvin). Slim slabs of Carrara clad the stainless steel-topped island. 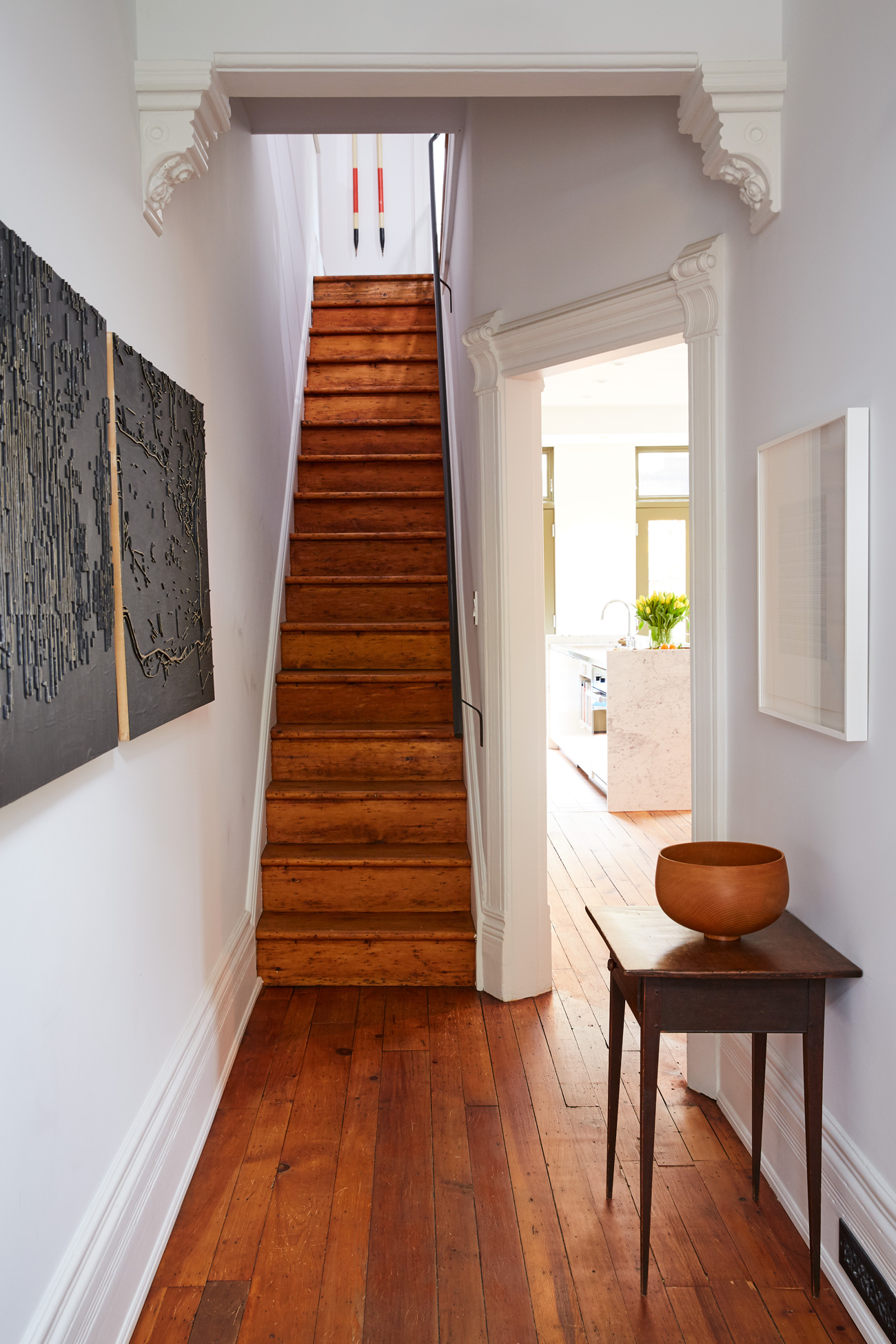 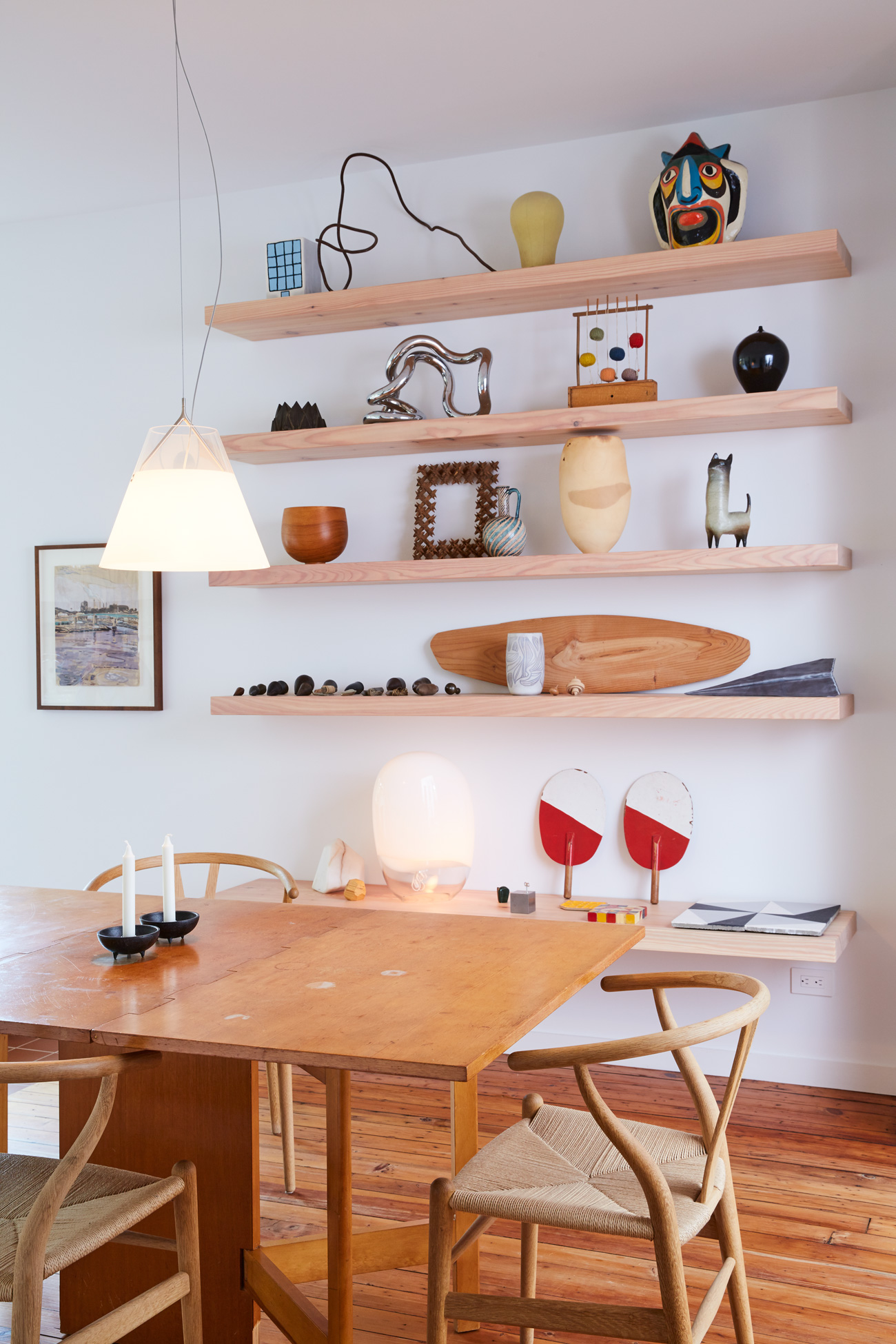 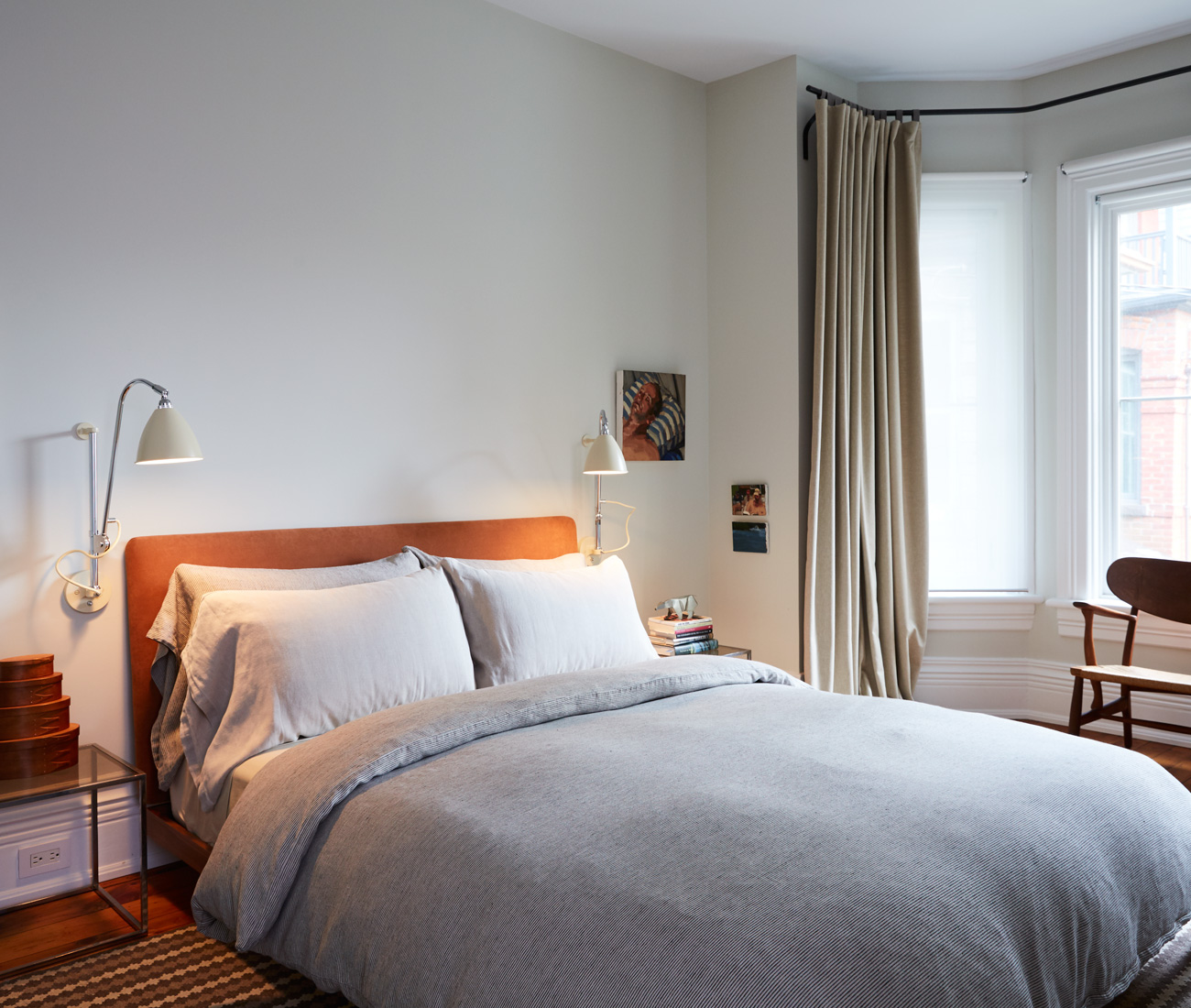 In the master, Jones accented the custom-made bed with Bestlite sconces and paintings by Shaan Syed. Duvet from Muji; Ikea rug. 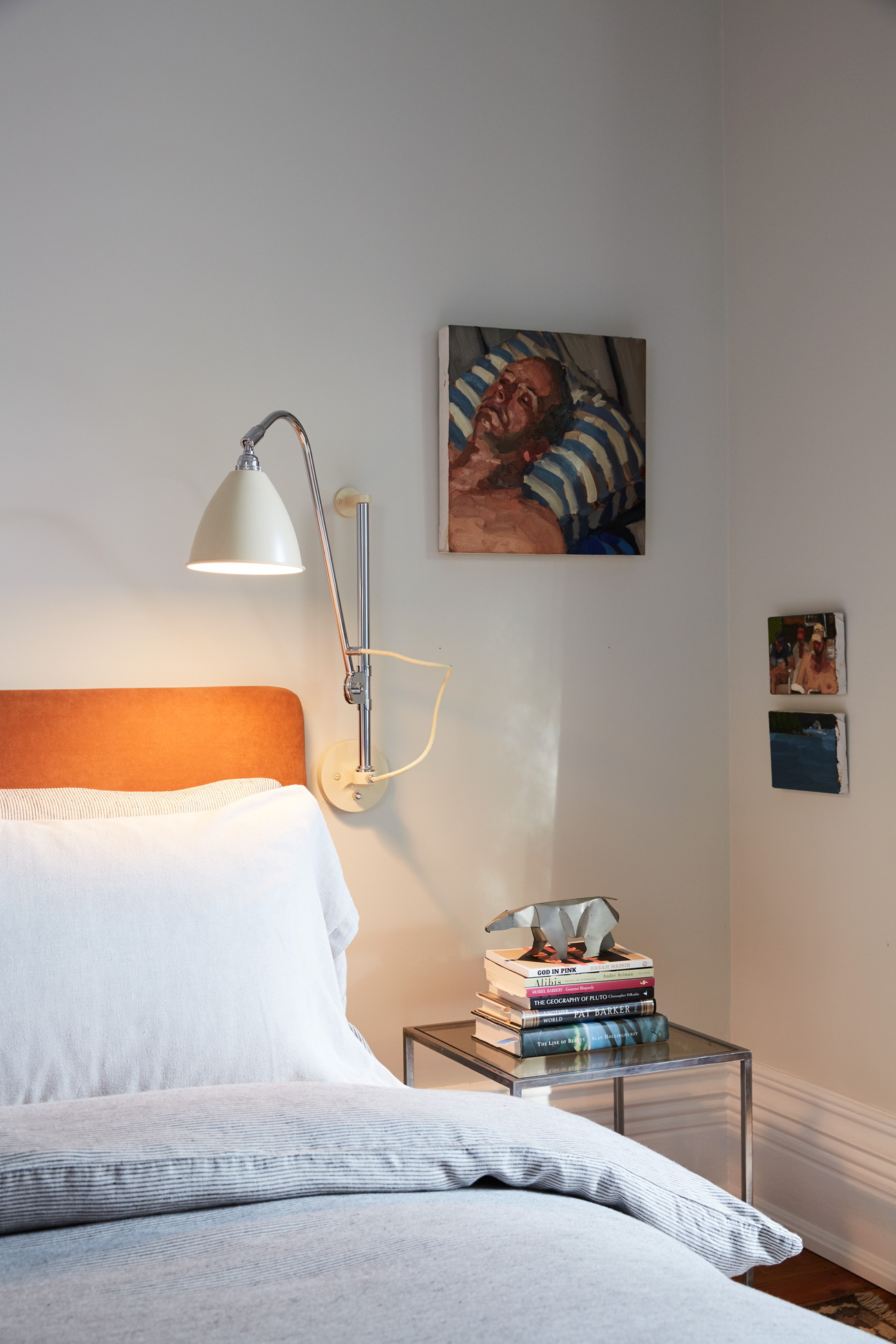 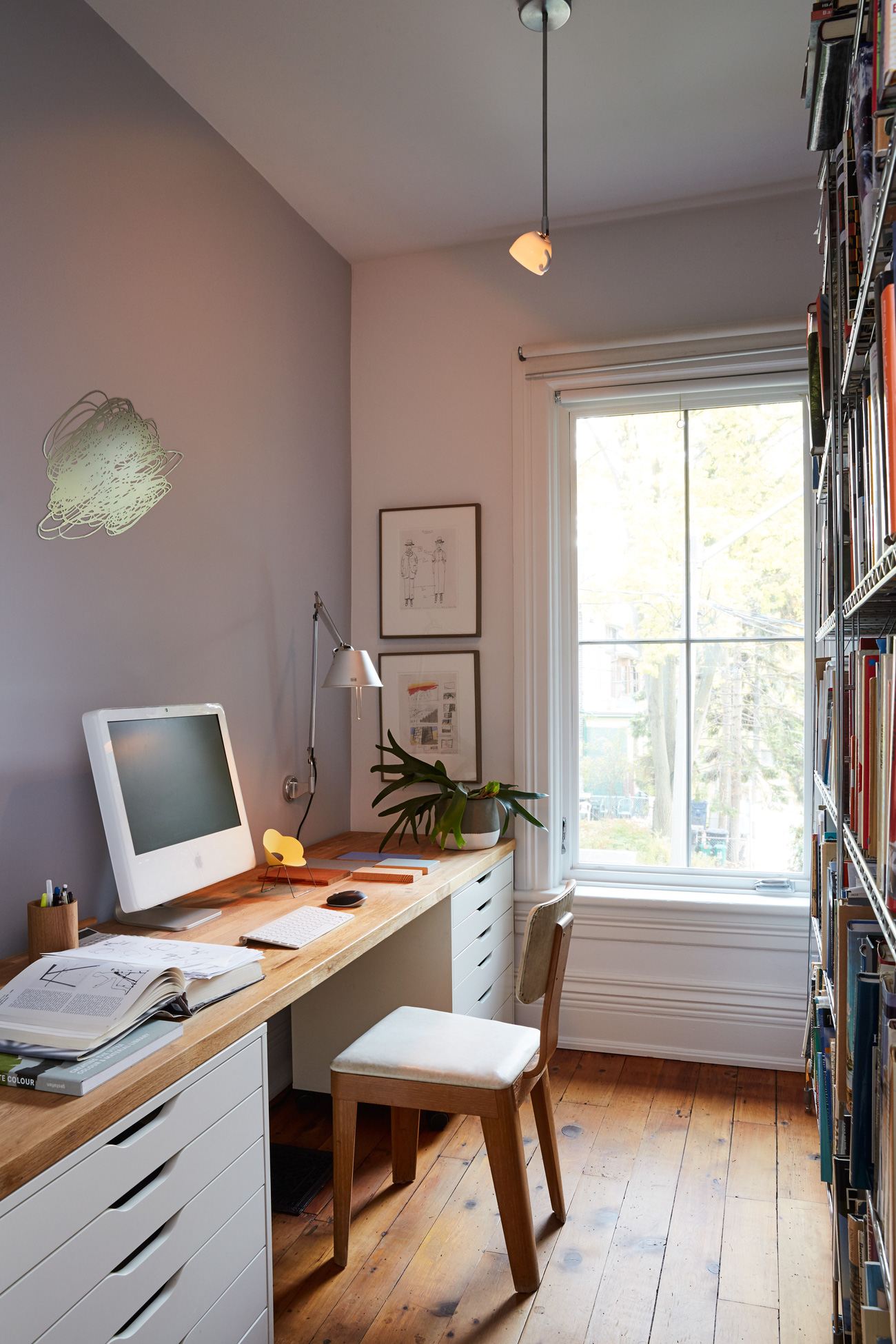 In his studio, filing cabinets are bridged with a butcher block. Above the desk is an Artemide task light and Micah Lexier’s A Minute of My Time. 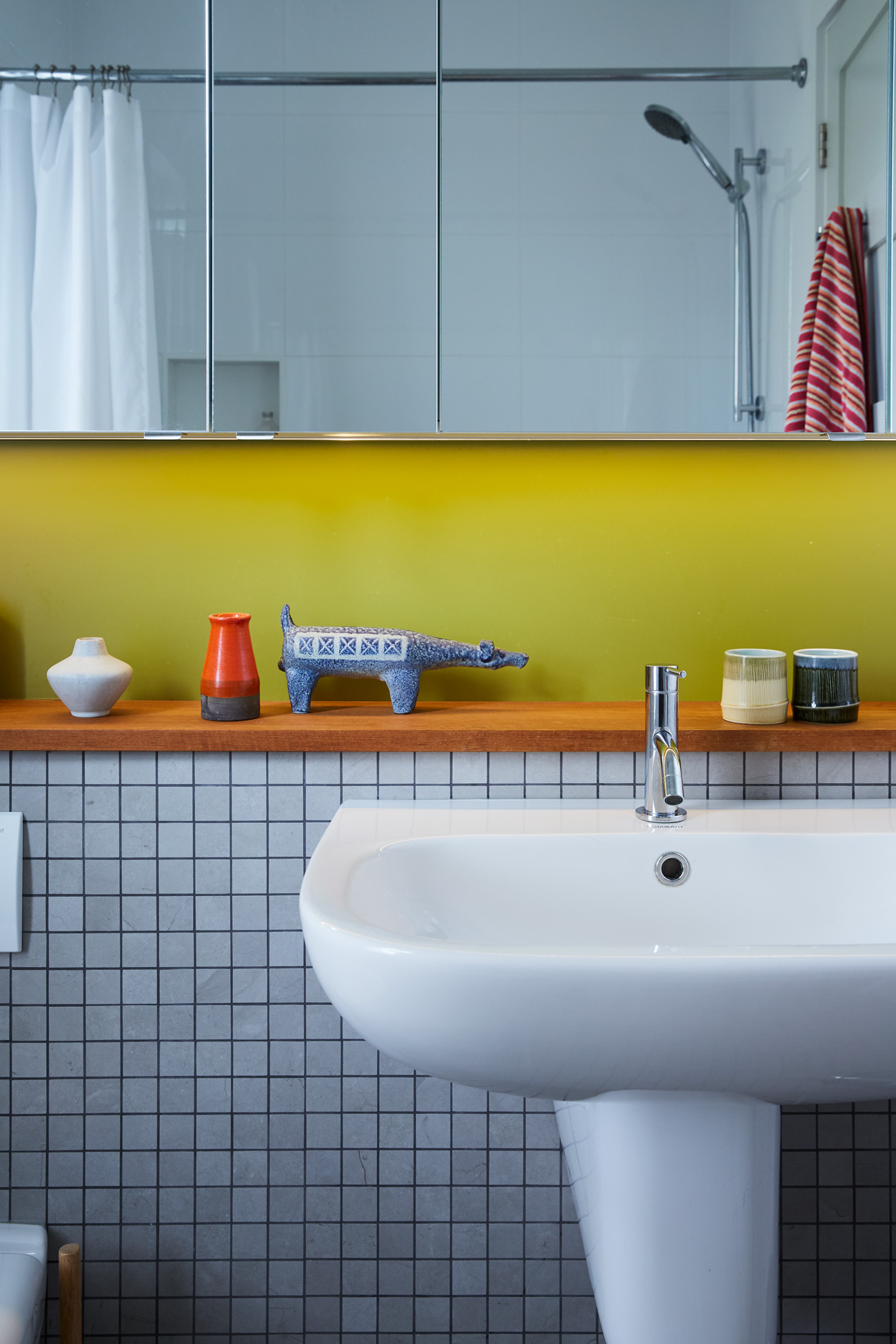 Mosaic tile from Ciot and chartreuse paint jazz up the bathroom. Cabano faucet from Taps. 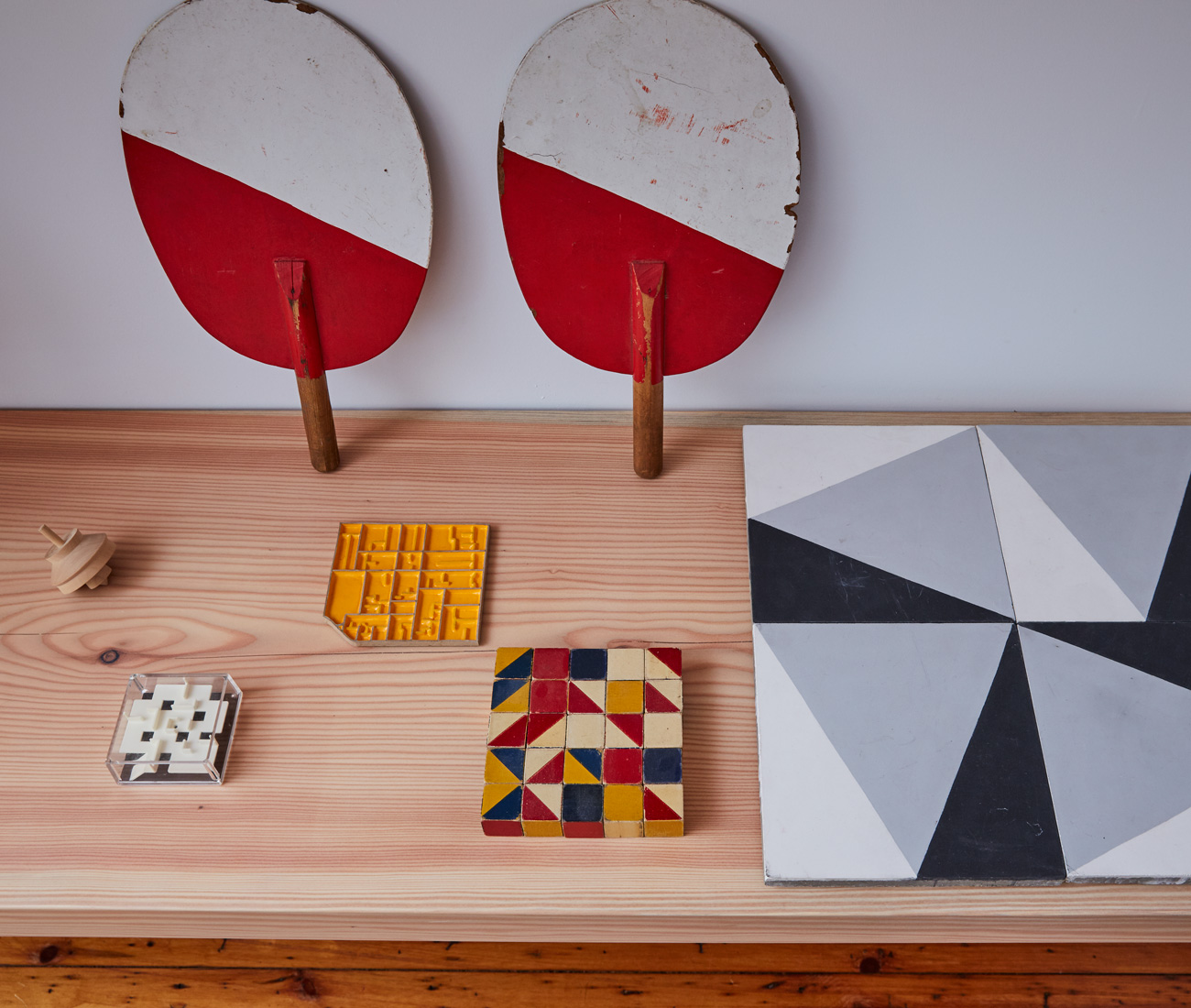 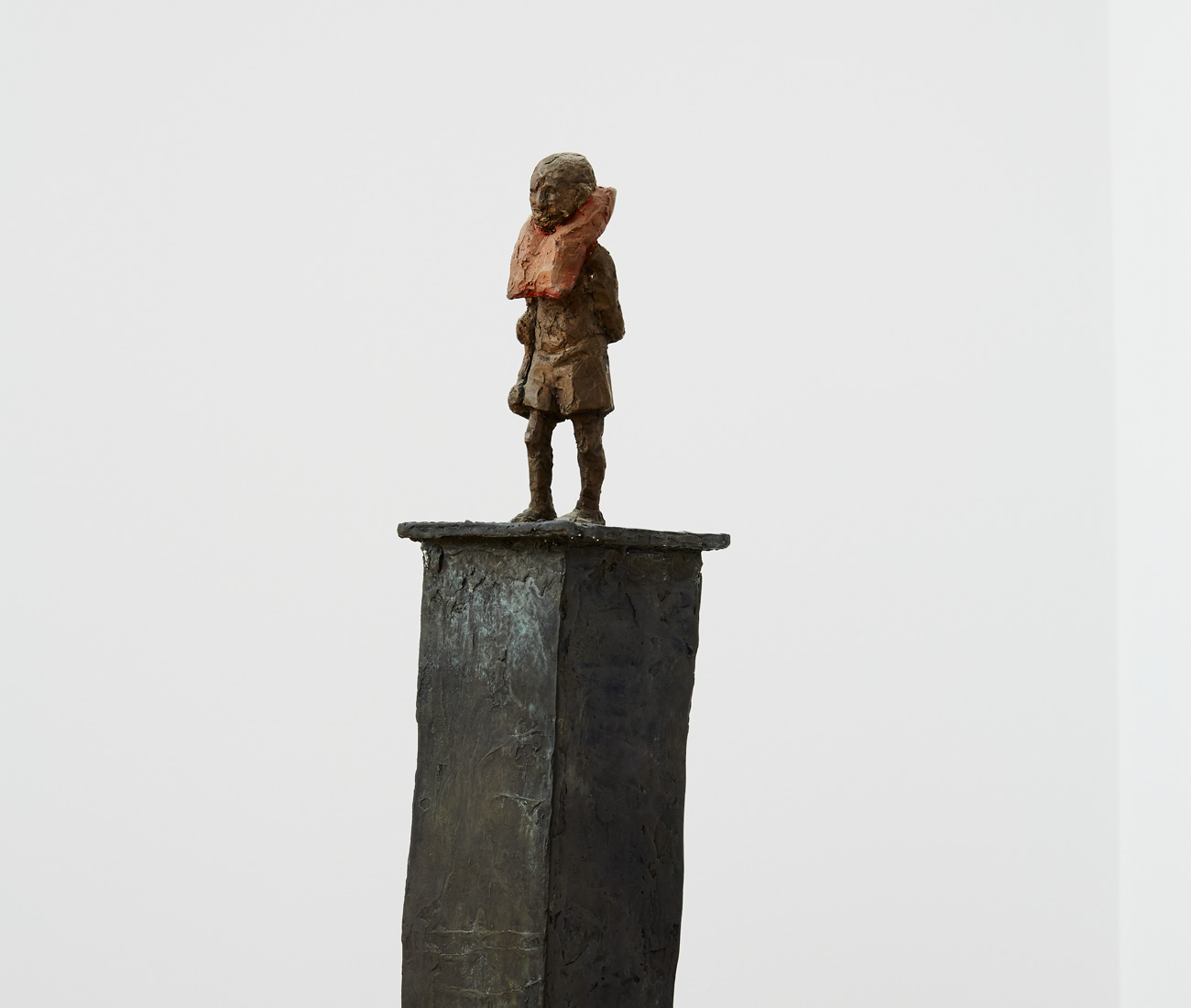 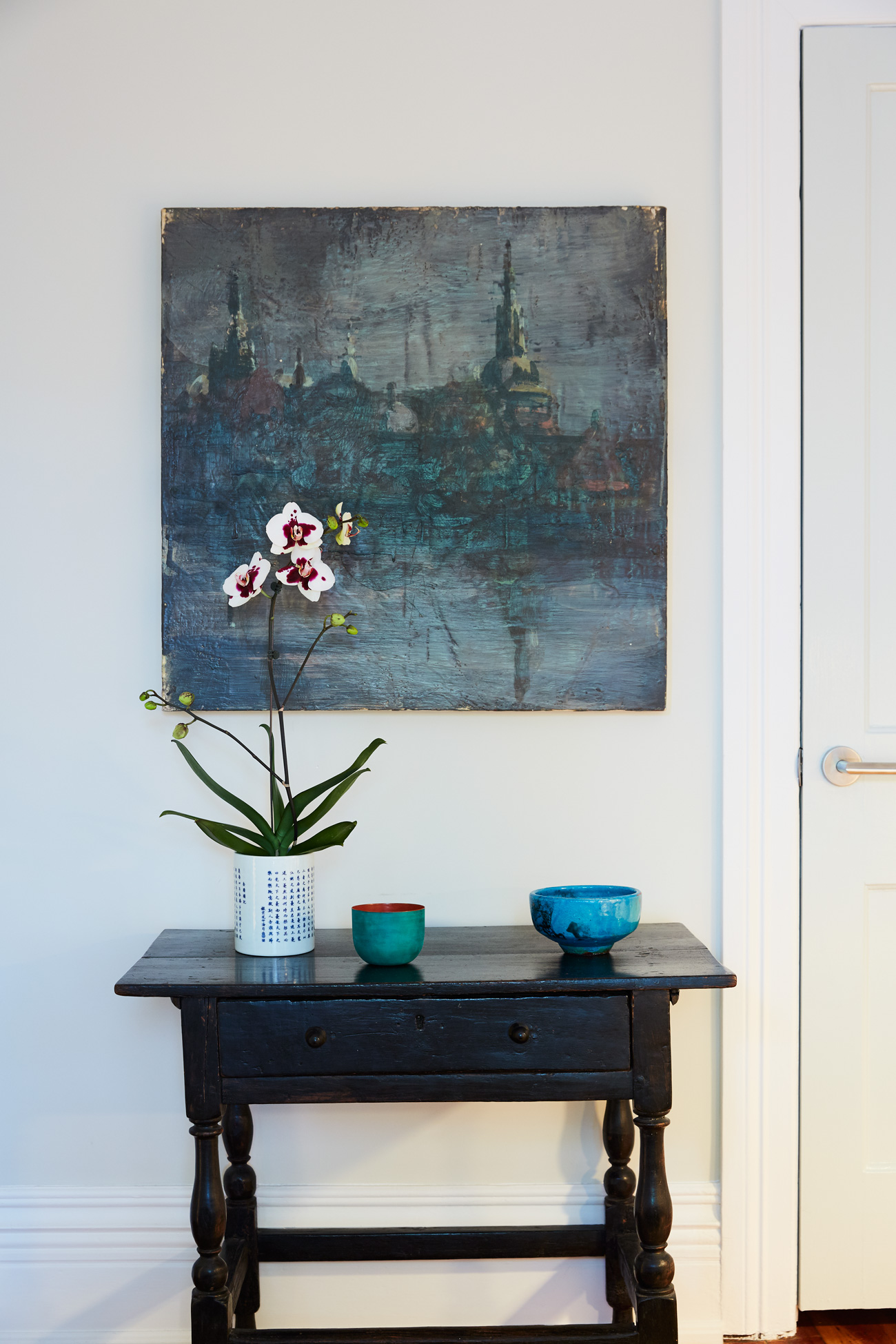 “A sense of enough,” is the way designer Andrew Jones describes what drew him to the south Roncesvalles Victorian that has been his home and personal design playground for the last eight years. Jones saw through layers of peeling wallpaper to good bones: plenty of south-facing light to counter the deep, dark spaces that are characteristic of these houses; a sufficient amount of original features to telegraph history; and ample raw potential. The home has become a compelling architectural biography for one of Canada’s most accomplished designers of furniture and domestic space.

The house – the end in a series of four circa-1888 row houses – had never been substantially renovated. At five metres wide and with 133 square metres of living space, it was generous enough for sizeable gatherings. The second floor, in fact, has three bedrooms, with one so wide that the south-facing room could also accommodate a studio/library.

In the first phase of the re-design in 2008, Jones focused on the fundamentals. Aside from a delicate window update, he did most of the work himself, even engaging his mom and stepfather in physical labour and “sandwich support.” He spent months wearing a respirator while pulling out thousands of nails, stripping back layers of wallpaper and refinishing the original red pine floors.

With phase two, which began two years ago, Jones took bolder architectural strides, including opening the back of the house to replace a tiny kitchen with a light-filled room that connects to the garden, and adding a generous dining area.

Jones’s love of cooking means the kitchen is an ode to both conviviality and machine-like efficiency. He describes it as a variation on the farmhouse kitchen, with a three-metre-long, marble-veiled island subtly shielding the hardworking spaces from the adjacent seating lounge. Terracotta tiles lend an unexpected rusticity to cooler stainless counters and what he calls the “pepperiness” of Carrara marble.

Just as he wore different hats during his own home’s renovation, Jones’s professional work toggles between the worlds of architecture and furniture design. He recently completed an exhibition design for the Gardiner museum’s True Nordic show, is working on a client’s house in the town of Mono and is collaborating on fellow furniture designer Tom Deacon’s home in Little Italy. On the furniture side, his best-known projects include the international design competition-winning Fleurt, now the signature chair of Manhattan’s Battery Park, the eye-catching pink umbrellas at Sugar Beach, and numerous contract pieces for Keilhauer.

But it is homes, Jones maintains, that are “vessels for the fulfillment of habits.” His long-time passion for collecting is evident  in the museum-like curation of objects throughout the house – furniture, books and artworks, many by local artists who are friends and collaborators, as well as antique-market finds and parts of his vast collections of educational toys and Japanese Kokeshi dolls.

Jones describes his holistic approach to arriving at a minimal, ecological and economical design in his work and his home: “You can be very modest with architecture, because the constellations of furniture and lighting form places, so the architecture doesn’t need to.” The result is a domestic tableau that achieves an effortless feeling of tranquility and comfort – the ideal backdrop to a creative life.

Originally published in our 2017 Special Guide Edition as Keeping up with Jones. 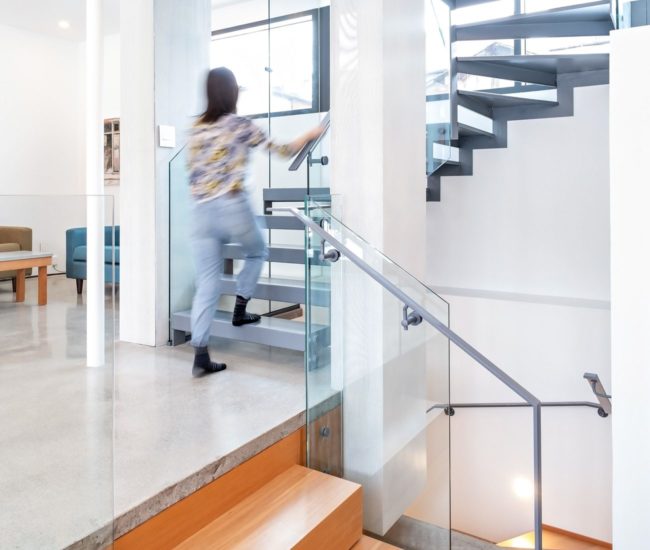