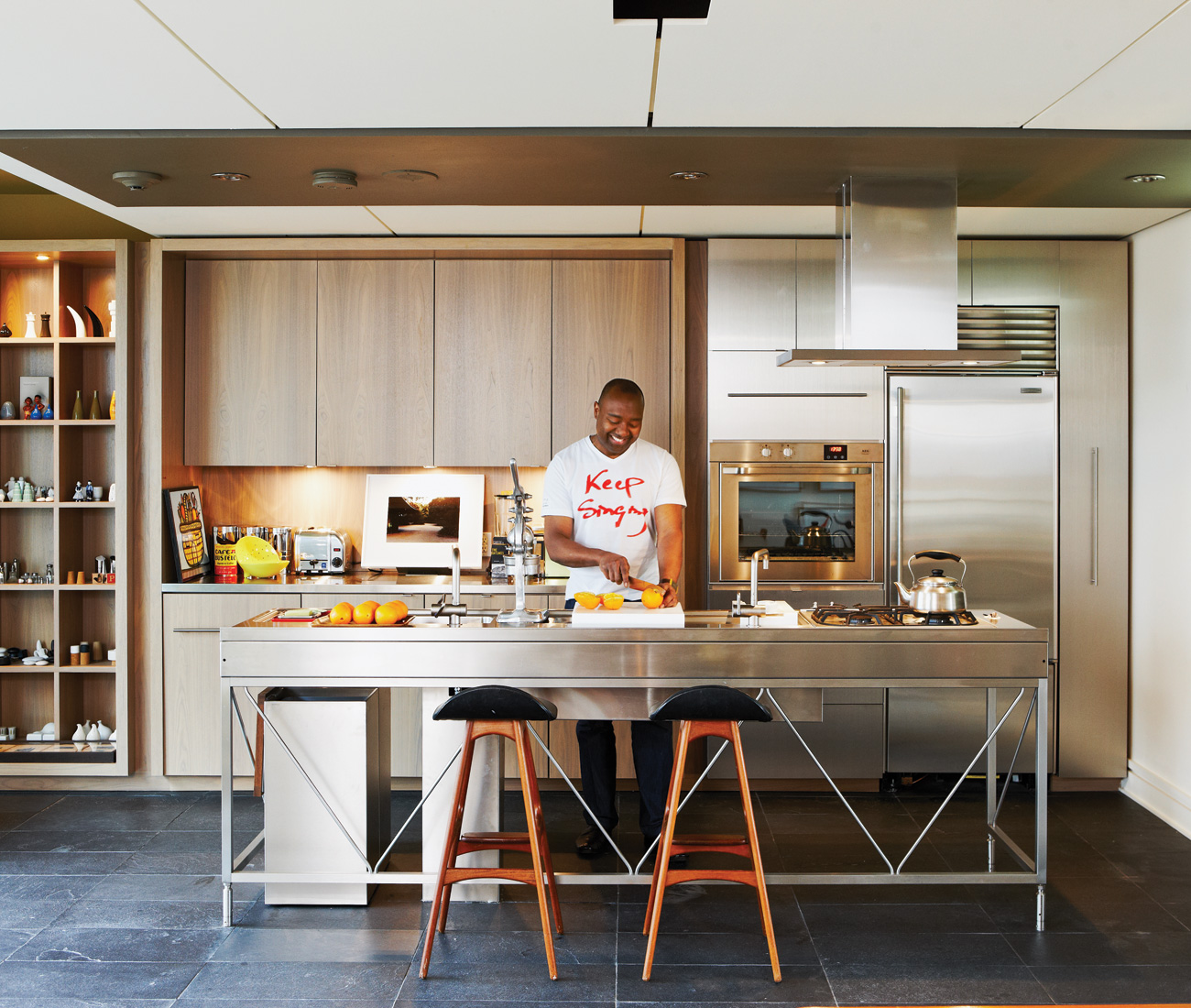 The kitchen workbench by Bulthaup is surrounded by walnut millwork designed by David Peterson and built by Richard Turner. Photo by Naomi Finlay. 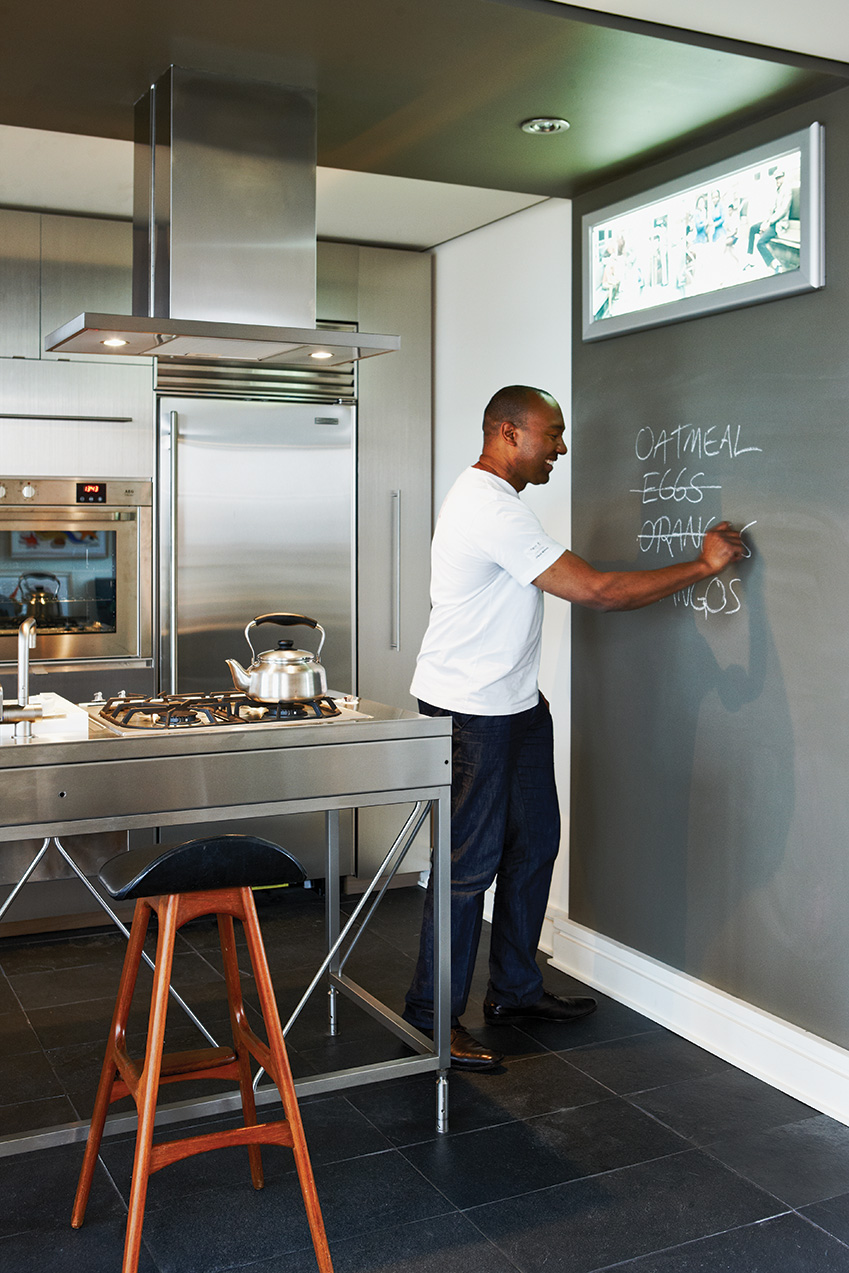 The kitchen's chalkboard wall is perfect for writing out grocery lists. Photo by Naomi Finlay. 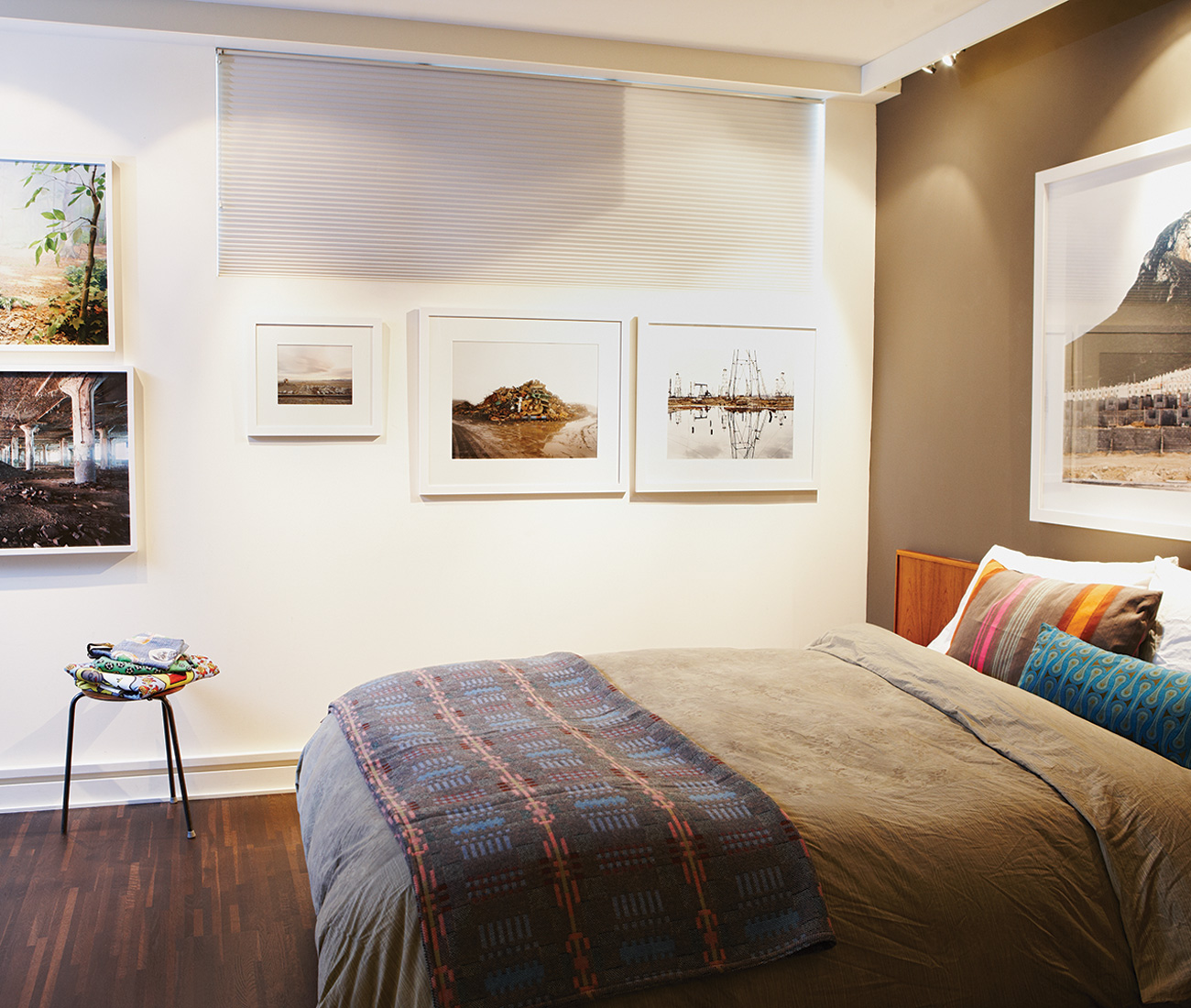 Photos by Corine Vermeulen-Smith and Edward Burtynsky, among others, hang in the master bedroom. Photo by Naomi Finlay. 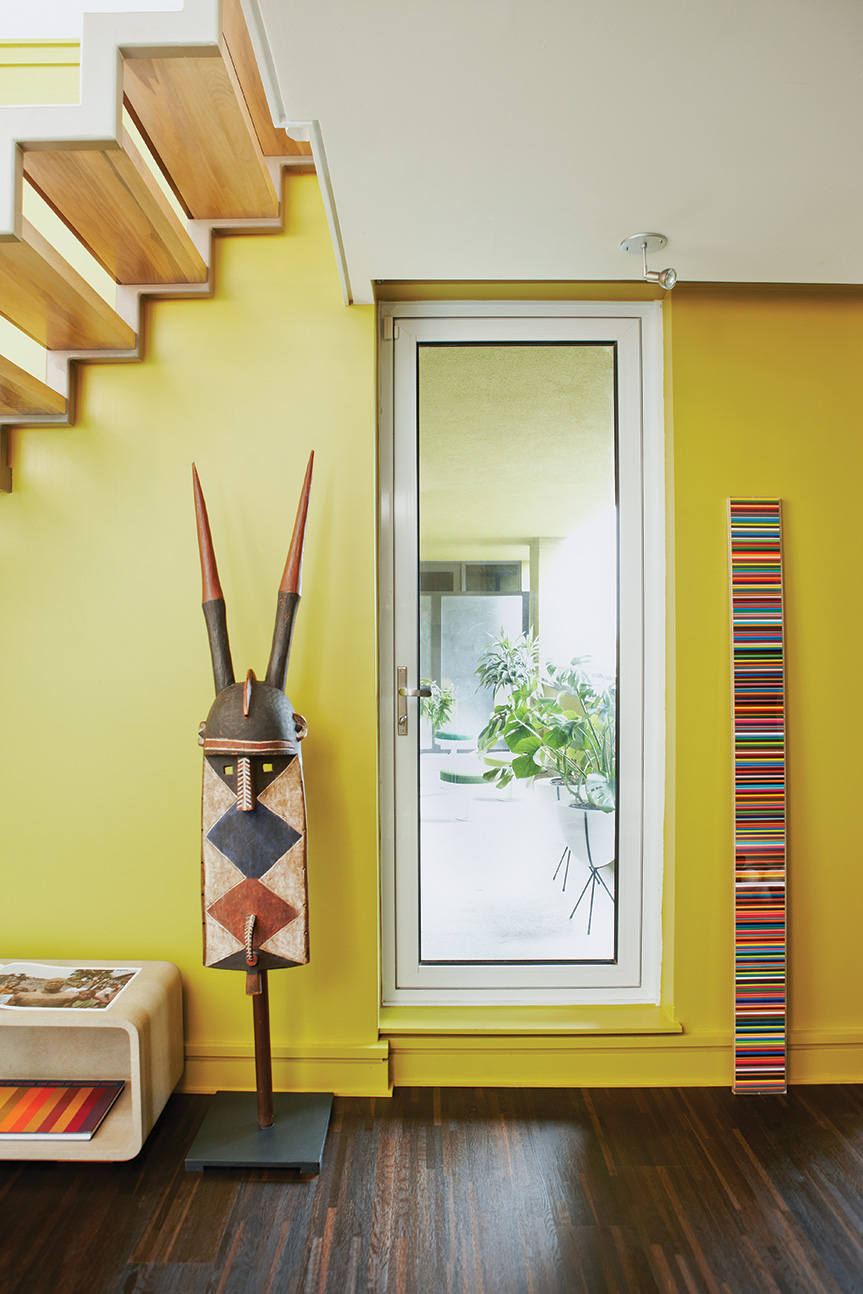 The patio doorway is framed with a ceremonial mask from Burkina Faso and Douglas Coupland’s pencil crayon sculpture. Photo by Naomi Finlay. 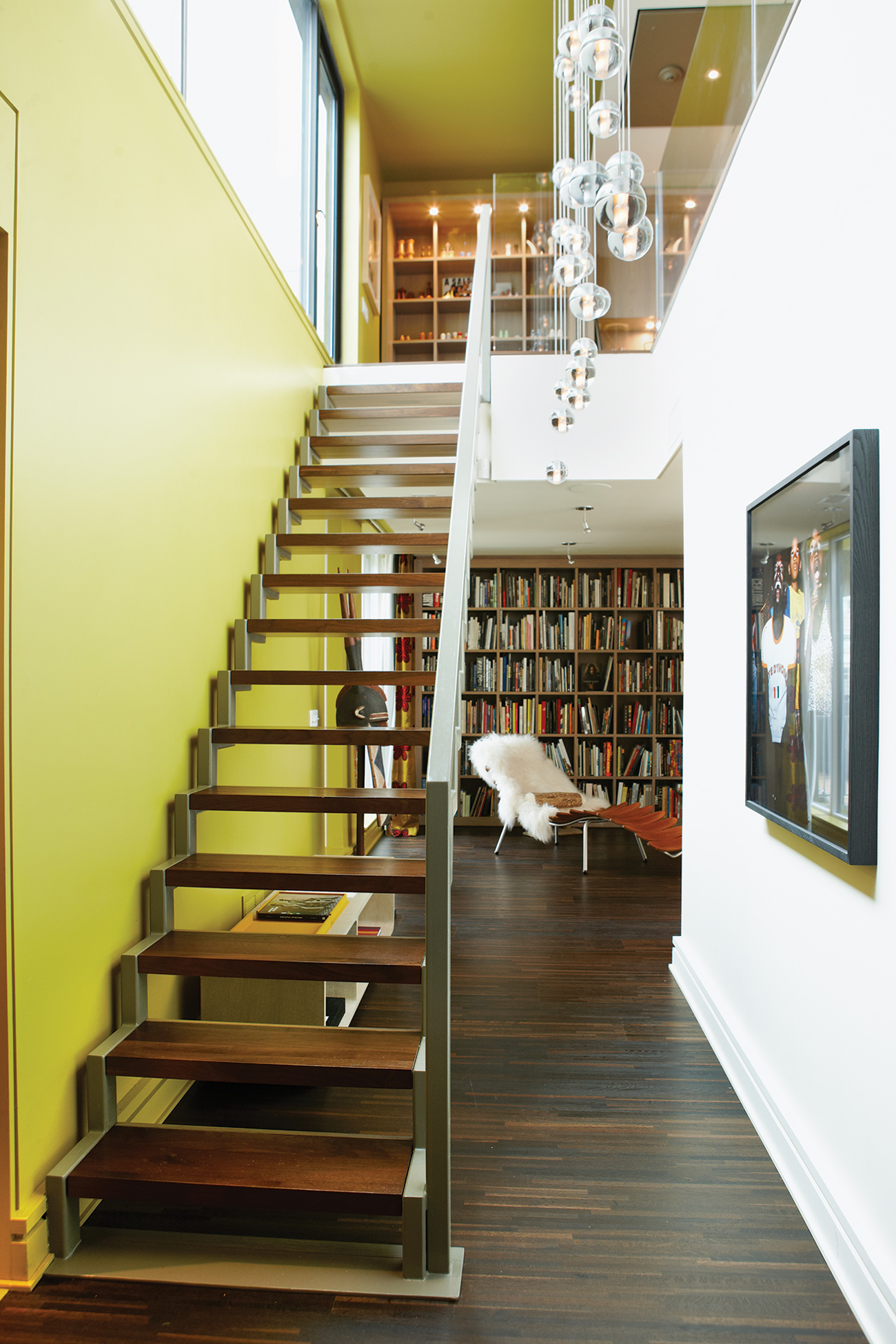 A view of both storeys from the front door. The chartreuse wall matches the building’s exterior. Bocci pendant lights by Omer Arbel. Photo by Naomi Finlay. 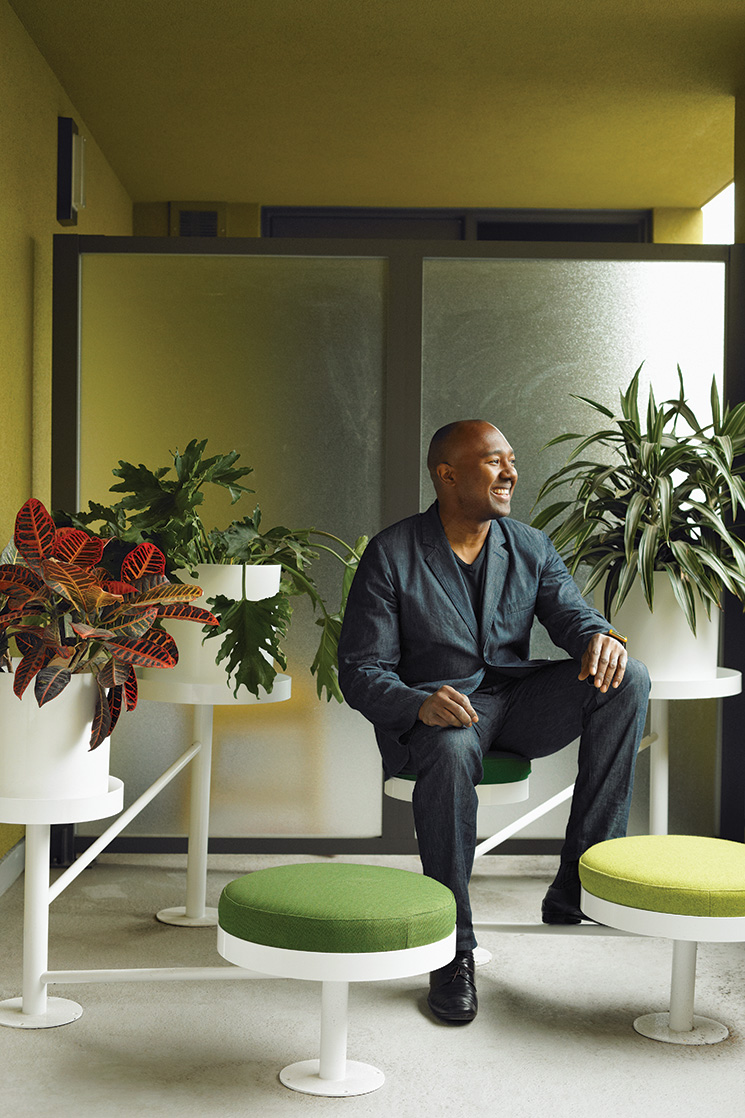 Montague sits among an arrangement of space-age plant stands and patio seats by Domison. Photo by John Cullen. 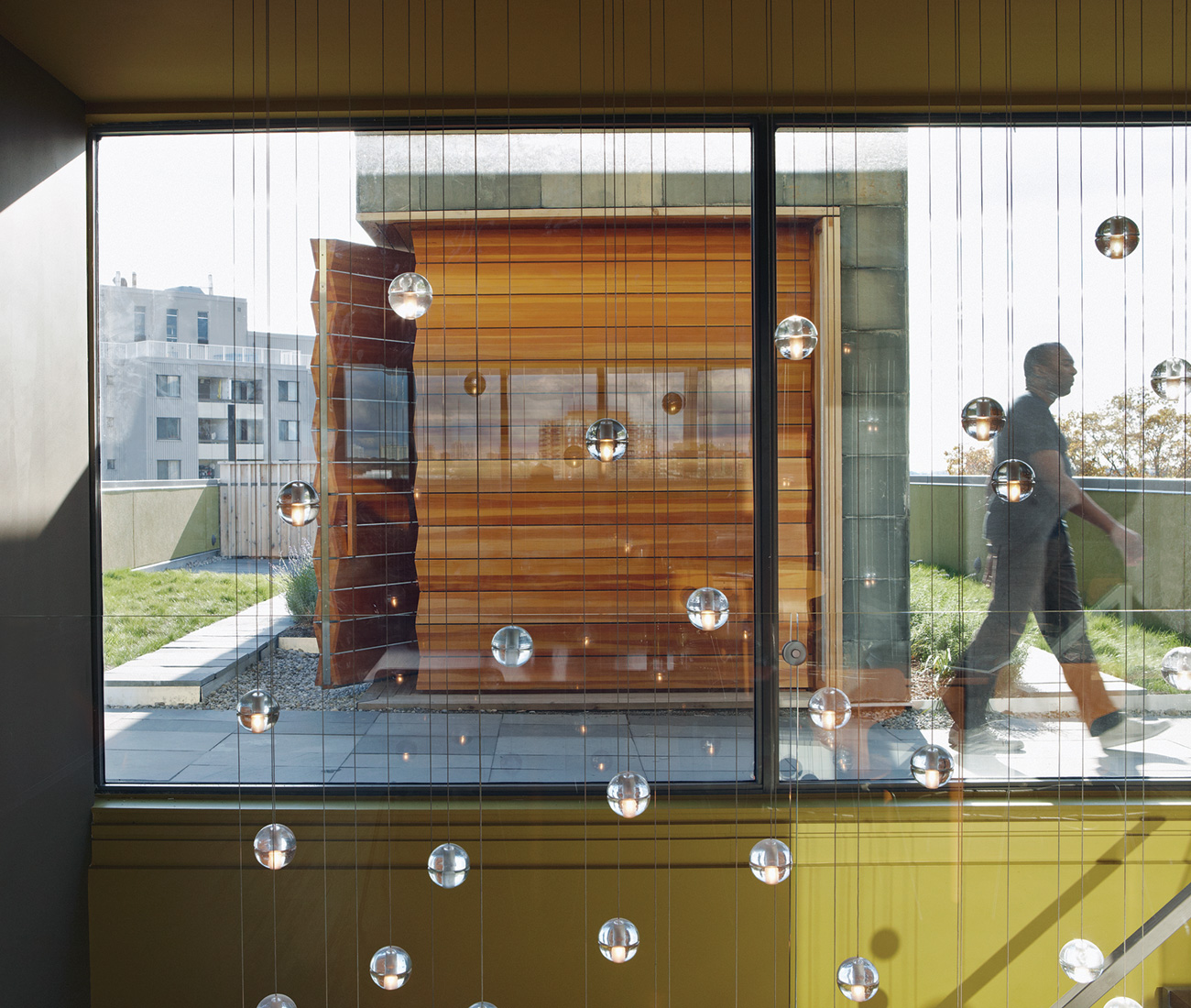 Architect David Peterson bookended the rooftop elevator shaft with a sauna (shown) on one side, and an outdoor kitchen on the other. Photo by John Cullen. 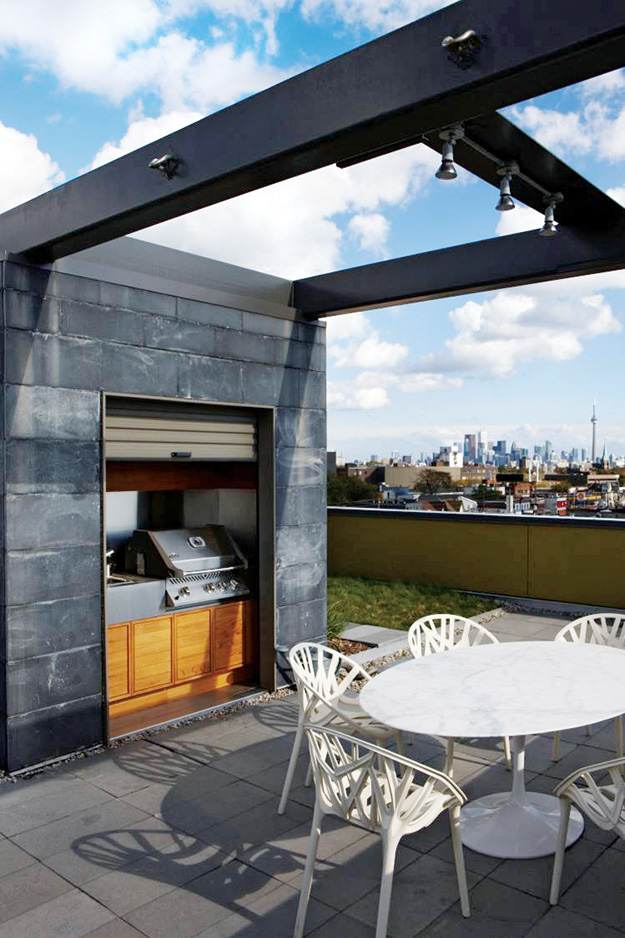 On the rooftop, limestone and Douglas fir define the kitchen, which has uninterrupted views of the city’s downtown. Vitra’s Vegetal chairs, available at Plan B. Photo by John Cullen.
Share Tweet Pin Email Print

Kenneth Montague’s home speaks volumes about his passion: collecting and living with what he loves

By Terence Dick
Photography by John Cullen and Naomi Finlay

“I’ve come around to the green,” says Kenneth Montague about the striking hue of his new home, which is defined in part by its open-air walkways painted a brilliant chartreuse – a detail that architect David Peterson (whose biophilic home we previously covered) insisted upon.

“Peterson thinks Toronto is afraid of colour, and I love the strategic injection of it,” Montague says. Looking around his living room at the mix of mid-century furniture, high-octane paintings and throw pillows made from African textiles, you see what he means. “There’s the subdued modernist palette, and then you hit it hard with colour. I call it a contemporary take on African-influenced modernism,” he says. Taking in the photographs that cover the walls of the bathroom, bedroom and hallways, it’s clear that this is not just the well-appointed home of one of the city’s best-known celebrity dentists: Numbered pushpins beneath each painting and photograph point to the fact that you’re also inside the headquarters of Wedge Curatorial Projects.

Montague’s parallel career as a curator took off when he began displaying the work of unknowns he was fascinated with, predominantly photographs by black artists, in the triangular foyer of his previous home. Like these artists, he too was wedging his way into the art world. His Wedge Collection now circulates through an international network of galleries. “It’s not only about black artists,” he says about the collection, which numbers in the hundreds, “but about telling stories that focus on the black identity.”

Dentistry and art – it’s a surprising combination, but Montague comes by his artistic sensibility naturally. There’s a story behind every object in his two-storey home, often a familial one that speaks to his fascination with individuality and the collision of cultures. “A lot of this furniture is from my childhood,” he says, gesturing to the teak dining set that he’s mixed with Eames sofas and a Noguchi coffee table.

He started collecting at the age of 10, when he was given a set of salt-and-pepper shakers crafted by his father, a shop teacher with a background in industrial arts. Running the gamut from high modernism to kitsch, his collection of shakers now covers an entire wall in his kitchen. In the living room is another prized grouping; colourful prints by famous sculptor Alexander Calder. These came to Montague from his Aunt Edith, a civil rights advocate in the United States who befriended many artists, including Calder.

Montague worked closely with the building’s architect, David Peterson, to customize the space in a way that would showcase his evolving collections. Now the new home is a larger realization of the original Wedge gallery. Peterson considered the width of a hallway on the first floor to create an intimate gallery for photographs, and concealed the track lighting. Together, the two brought artistry to the exterior, where the building’s elevator shaft sits in the middle of the rooftop garden. Adding a sauna on one end of the structure and an outdoor kitchen on the other, Montague has created another spectacular space with its own story to tell. DAVIDPETERSONARCH.CA