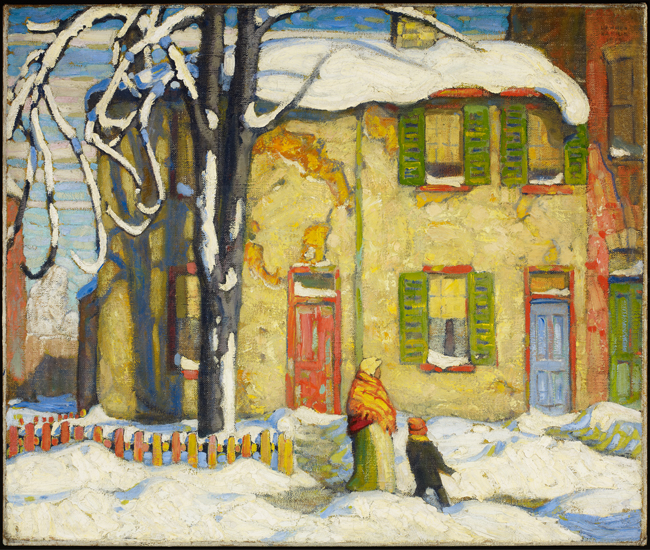 The Idea of North: The Paintings of Lawren Harris is on display at the Art Gallery of Ontario from July 1 to September 18

Majestic mountains, icebergs, even tree stumps: it’s this vision of Canada we can attribute to Group of Seven painter Lawren Harris. These canvases are national treasures, but there was a time when his eyes were turned toward less-exalted landscapes. A member of Toronto’s upper crust, he found wilderness in St. John’s Ward, one of the city’s poorest neighbourhoods. Local, but alien and uncultivated, it was ripe with poetic potential.

The Ward, as it came to be known, was bound by Queen, College, Yonge and University. Home to waves of immigrants – African, Irish, Jewish, Italian, Eastern European and Chinese – it was the bottom layer of Hogtown’s hierarchy. By the time Harris wandered it, making sketches in the early 1900s, it was being expropriated, piece-by-piece, to build landmark institutions like Old City Hall and Toronto General Hospital.

Compared to the smoothed-out surfaces of his transcendent, snow-peaked landscapes, the small number of Ward paintings are mottled. And, apart from a stray figure or two, the early paintings are solely occupied by taciturn row houses. From today’s perspective, these homes are real-estate goldmines, but in Harris’ time they were grim tenements. A Modernist, he sought to capture the eternal in urban squalor. However, his downtown realism would soon give way to the abstraction of nature’s poetry.

Contemporary artists continue to search for signs of humanity among concrete and glass towers, often finding it in hidden spaces like alleys, or in the disarray of refuse. The city dominates our everyday vision but it evades our larger sense of “nation,” just as Harris’ natural landscapes take precedence over his urban work. Are his beatific scenes iconic because they – like the North – remain unchanged in the collective memory? Or could it be that modern metropolises change far too fast for consecration?

Originally published in Issue 3, 2016 as Views from the Seven.