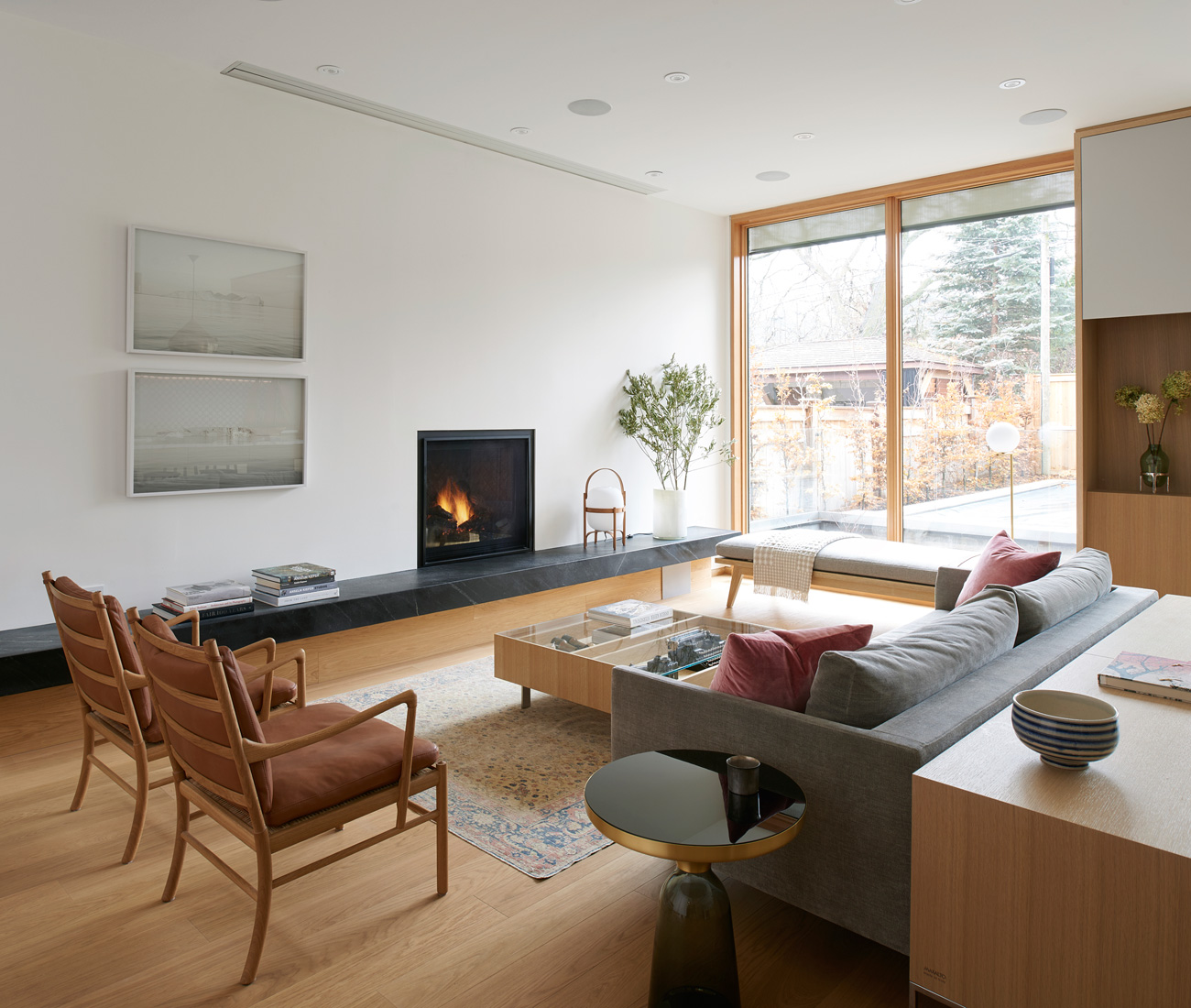 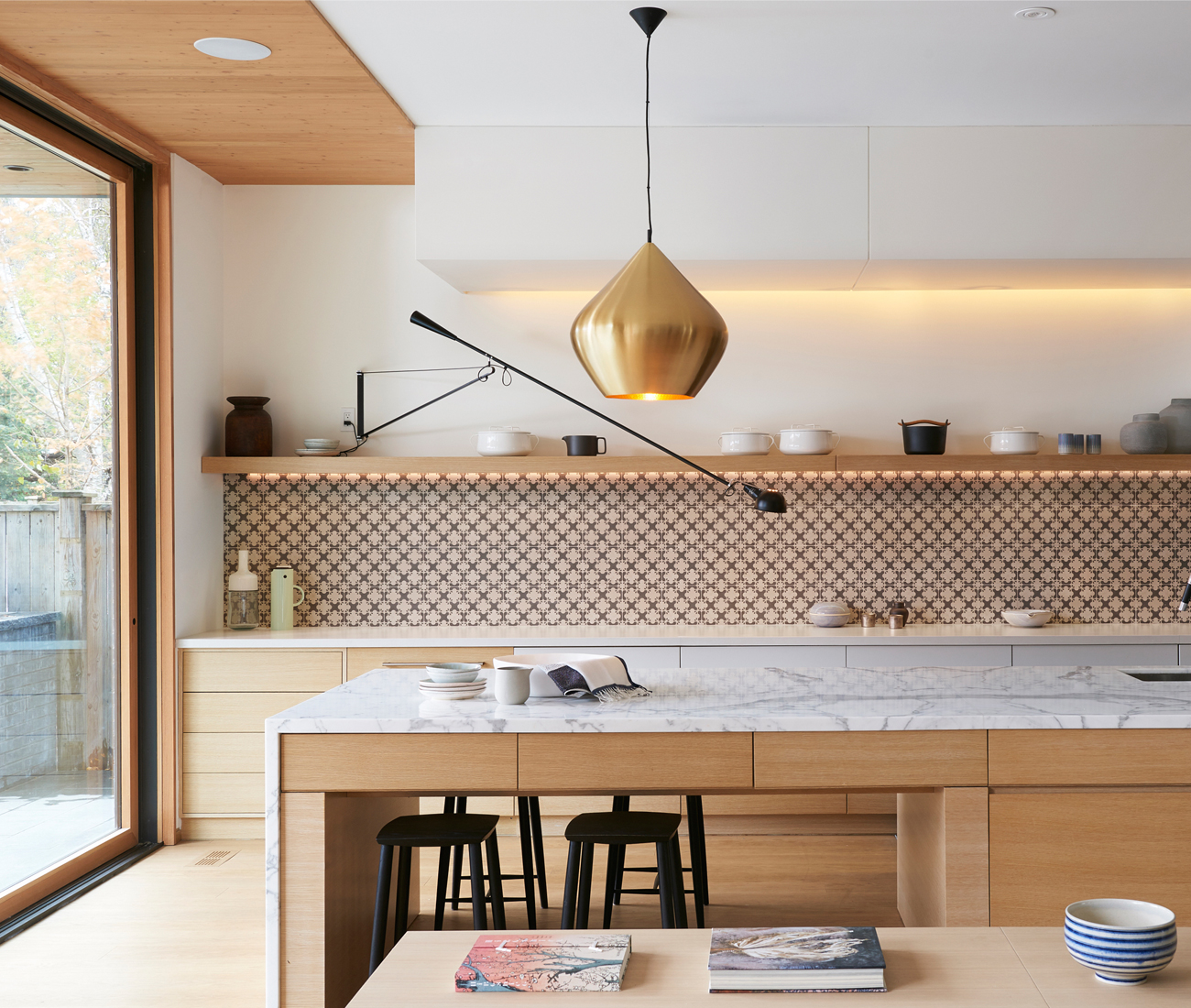 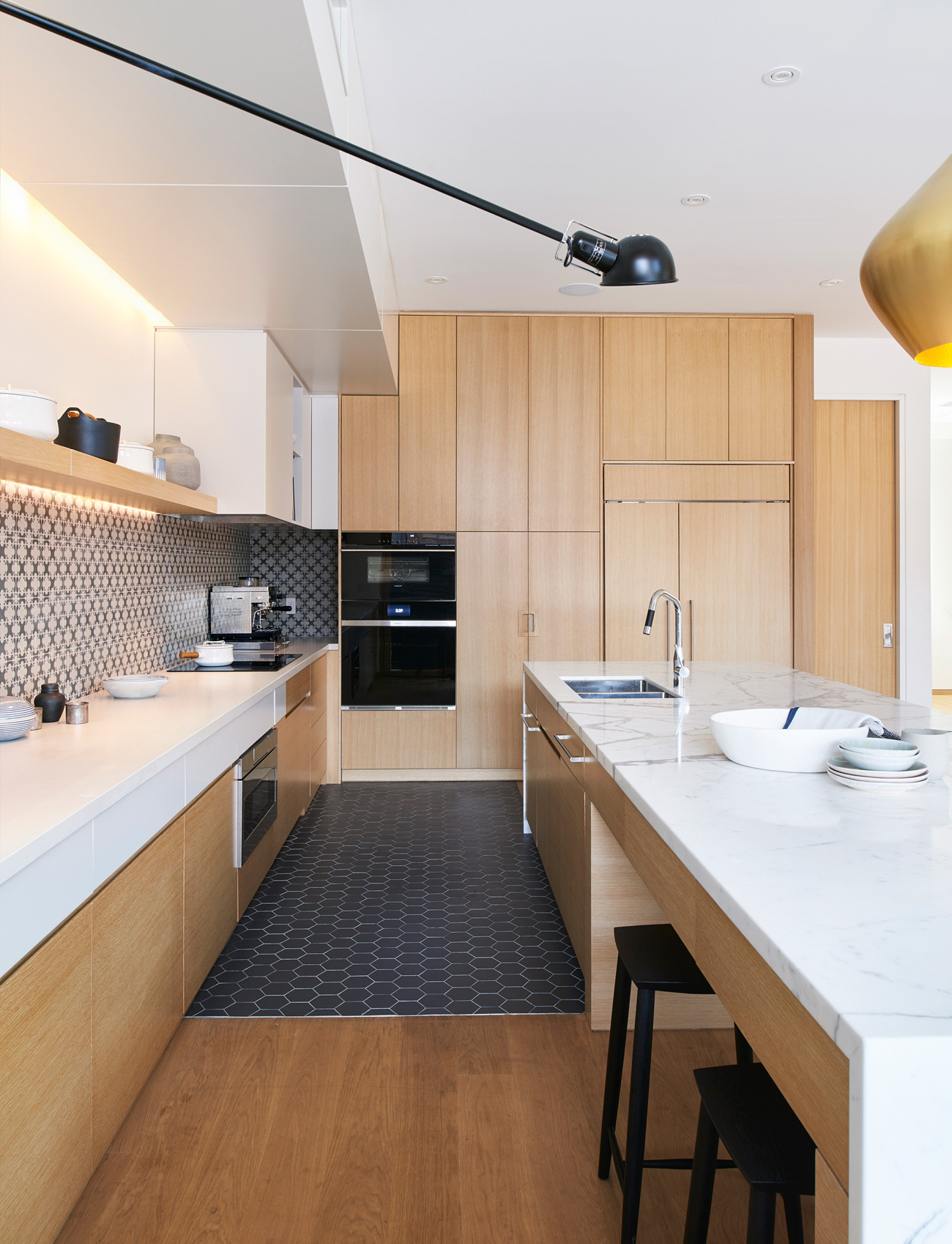 A Flos wall lamp from LightForm stretches to the marble-topped island. Hexagonal tiles by Ceragres; white oak flooring throughout by Moncer. 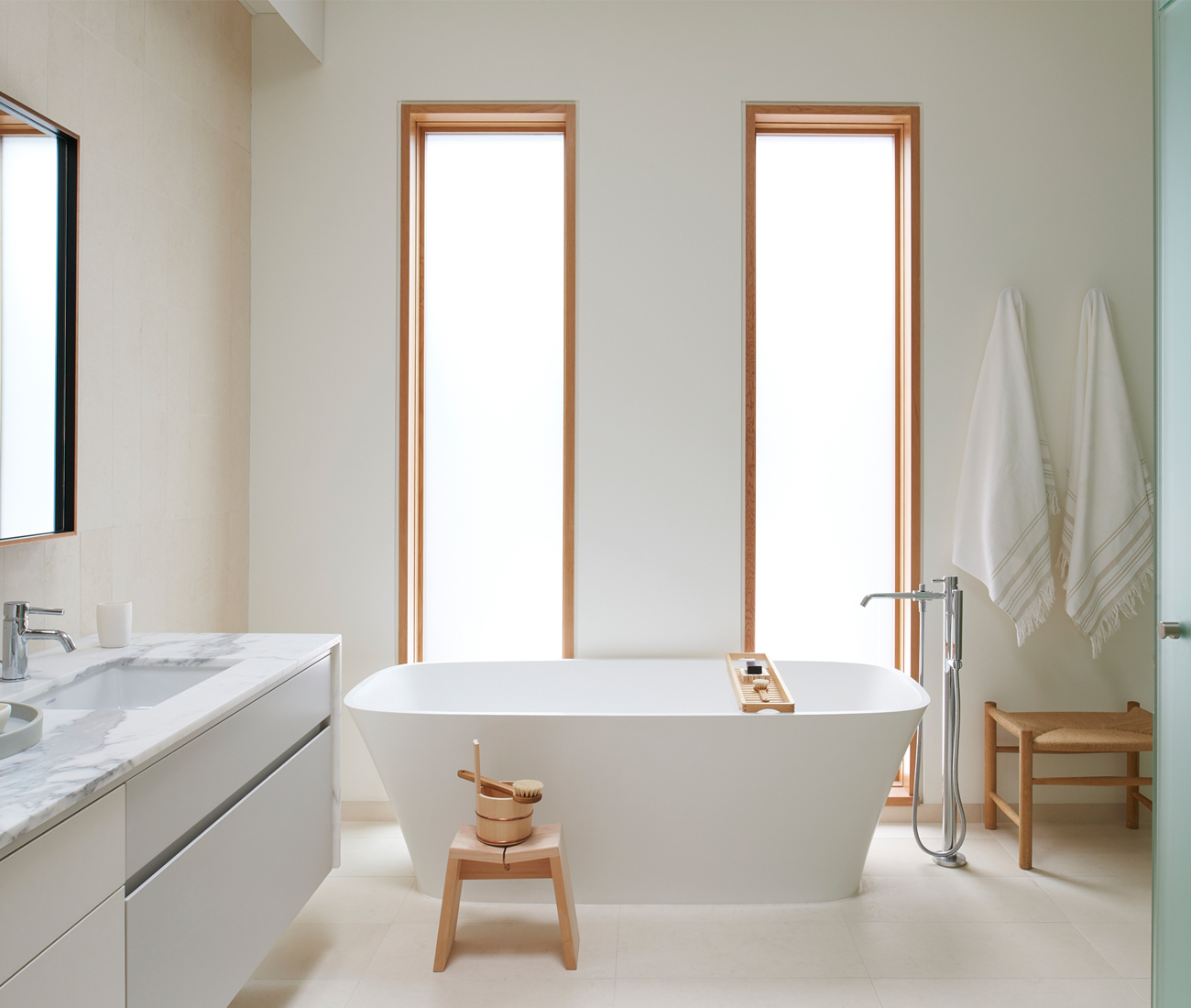 Stone Tile limestone runs from the floor up behind the vanity. Mjölk accessories echo the mahogany trim around the windows. Photo by Alex Lukey. 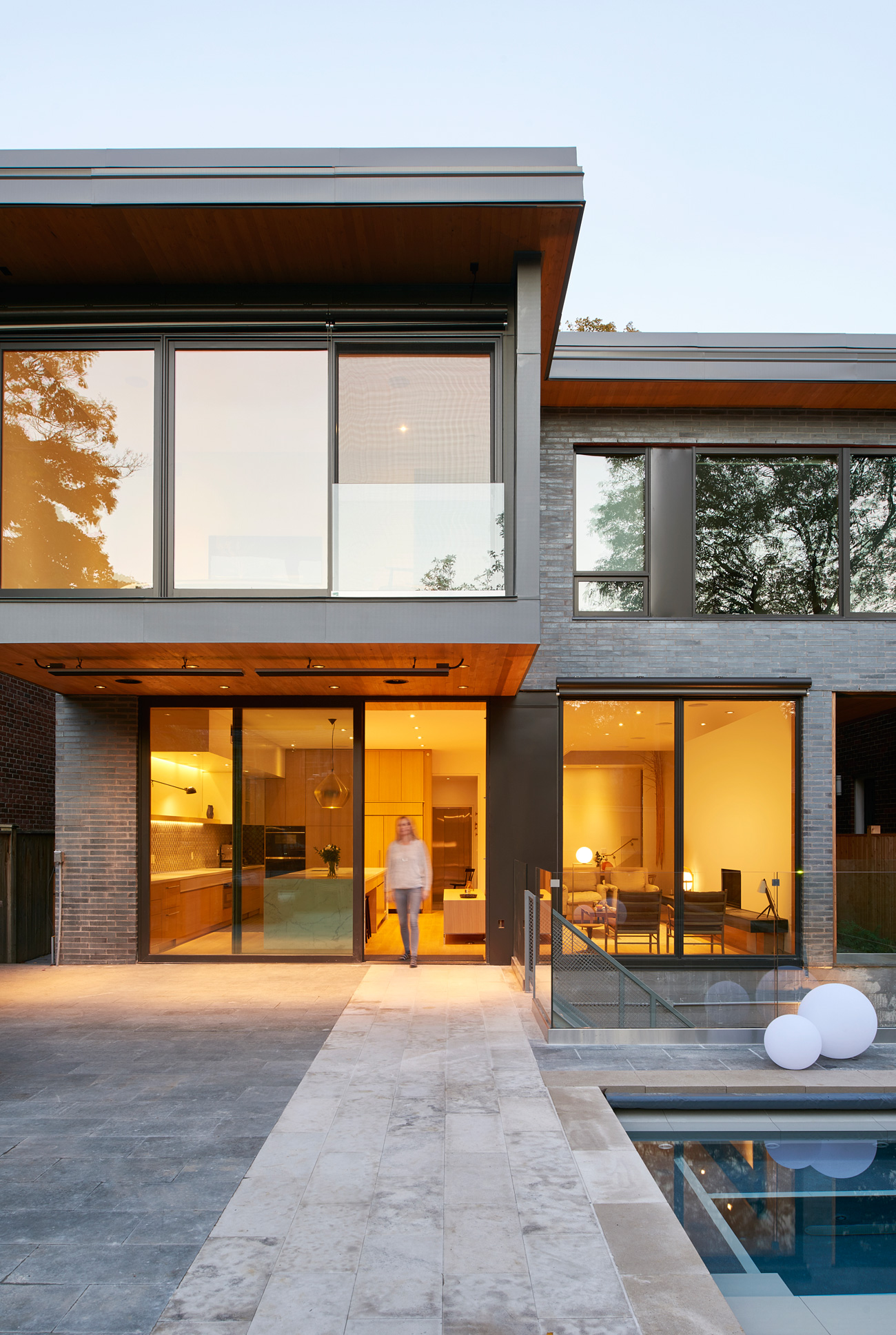 A sliding door from Loewen leads out to the Solda pool. Photo by Alex Lukey.
Share Tweet Pin Email Print

By Simon Lewsen
Photography by Naomi Finlay and Alex Lukey

When an active family of hockey players, dancers and gymnasts decided to build a dream home in 2013, they envisioned an equally high-performance design. Amanda and Ryan, a professional couple with three children, wanted a house that would be tough, but also graceful and nimble like an athlete. So, they hired the guy who designed their favourite gym: Totum Life Science on King Street West, an airy, split-level concept with warm, tactile wood floors. They hoped Arriz Hassam, principal at Arriz + Co., would bring that same breezy sensibility to their five-bedroom house, an original build in Leaside.

Cathy Garrido, a principal at Altius Architecture, designed the overall structure, a sturdy, ironspot-brick box with Douglas fir soffits and an 85-square-metre kitchen and living room. “When you have a big, wide-open floor plate,” she says, “you must ask yourself: ‘How do you create a sense of unfolding – a sense of surprise?’” To achieve this effect, she envisioned the front foyer as a sober antechamber that opens, dramatically, to the main house. 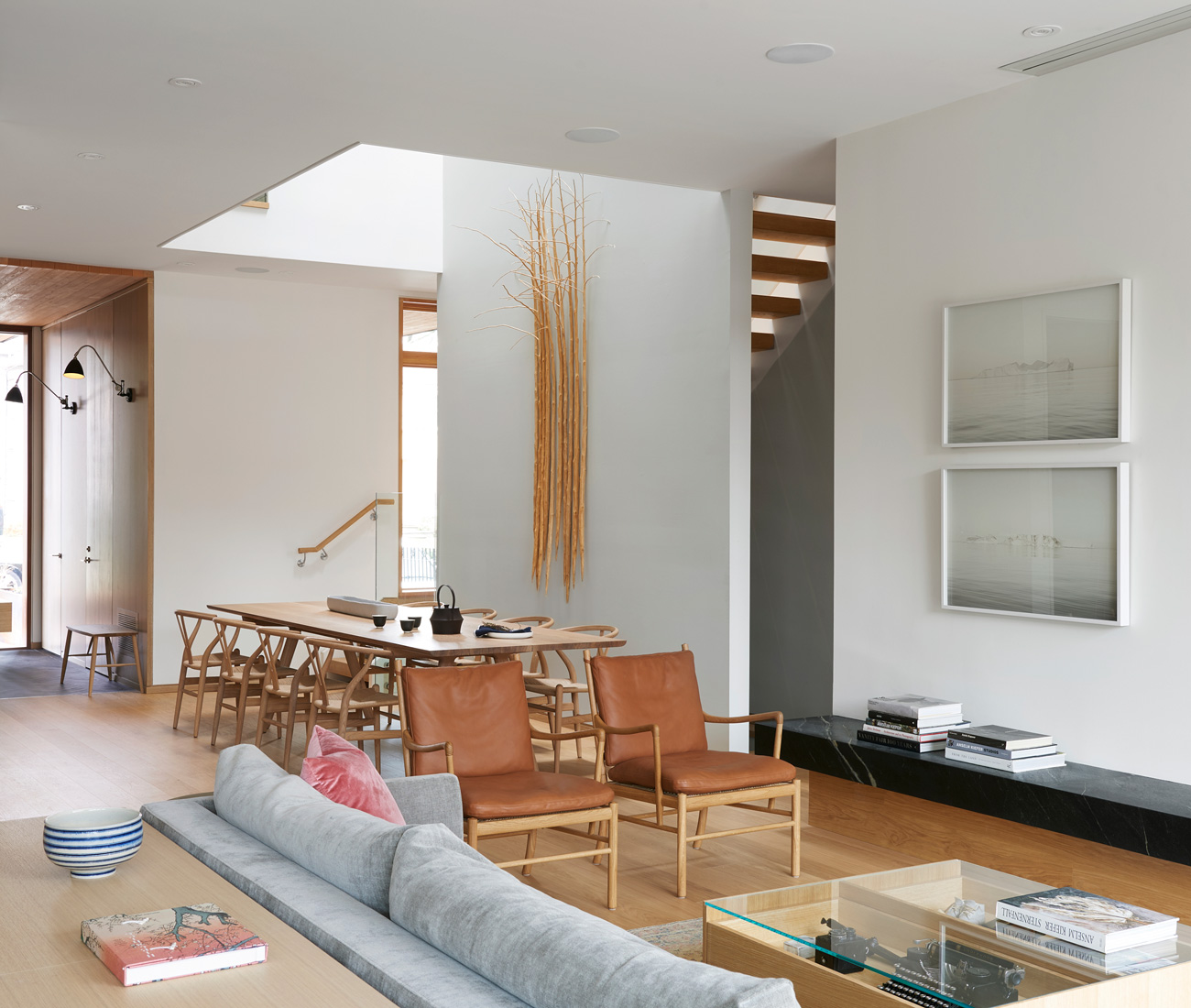 Within this expansive area, Hassam used natural materials and unobtrusive furnishings, which demarcate regions without cutting them off from one another. The living room – which is defined, in part, by spindly tan-leather chairs and a custom daybed – can overflow into the space behind it, a bar area that aligns with the marble kitchen island. “All of a sudden, what was an intimate space can become a grand space,” says Hassam. Although the furniture is low-slung, the built-in cabinetry is tall and thin, accentuating the 3-metre-high ceilings. These elongated forms appear throughout, including in the mudroom at the side entrance, where each family member has a millwork “locker” for helmets, cleats and hockey sticks.

Amanda and Ryan wanted a wheelchair-accessible home – an increasingly common request – so they wouldn’t have to renovate or move should their needs ever change. Accessibility, says Garrido, isn’t just a matter of installing an elevator, although she certainly did that. It also means building gracious, even floor plans. The ground level is entirely at grade for a seamless transition between indoors and outdoors. And the wraparound second-floor landing is 1.5-metres wide at every turn. Accessible space, it turns out, is also beautiful. “Everyone should have wide hallways,” says Amanda.

In keeping with the “high-performance” theme, Hassam’s material palette is timeless and durable: white walls and white oak floors grounded by dark accents, including a soapstone bench in the living room, touches of grey slate and, for the kitchen backsplash, mosaic tiles by Spanish designer Patricia Urquiola.

The main attraction, though, is natural light, which streams in not only from the floor-to-ceiling windows but also from the 7-metre-high atrium above the dining-room table. Sun even reaches to the basement – which, of course, includes a state-of-the-art gym – via a concrete light well. Hassam and Garrido were adamant that no single room would be cut off from the light flow. Incredibly, they achieved that goal. “Design,” says Hassam, “is an exercise in excellence.” Spoken like a true champion.

Originally published in our Fall 2017 Issue as Exercise in Design.