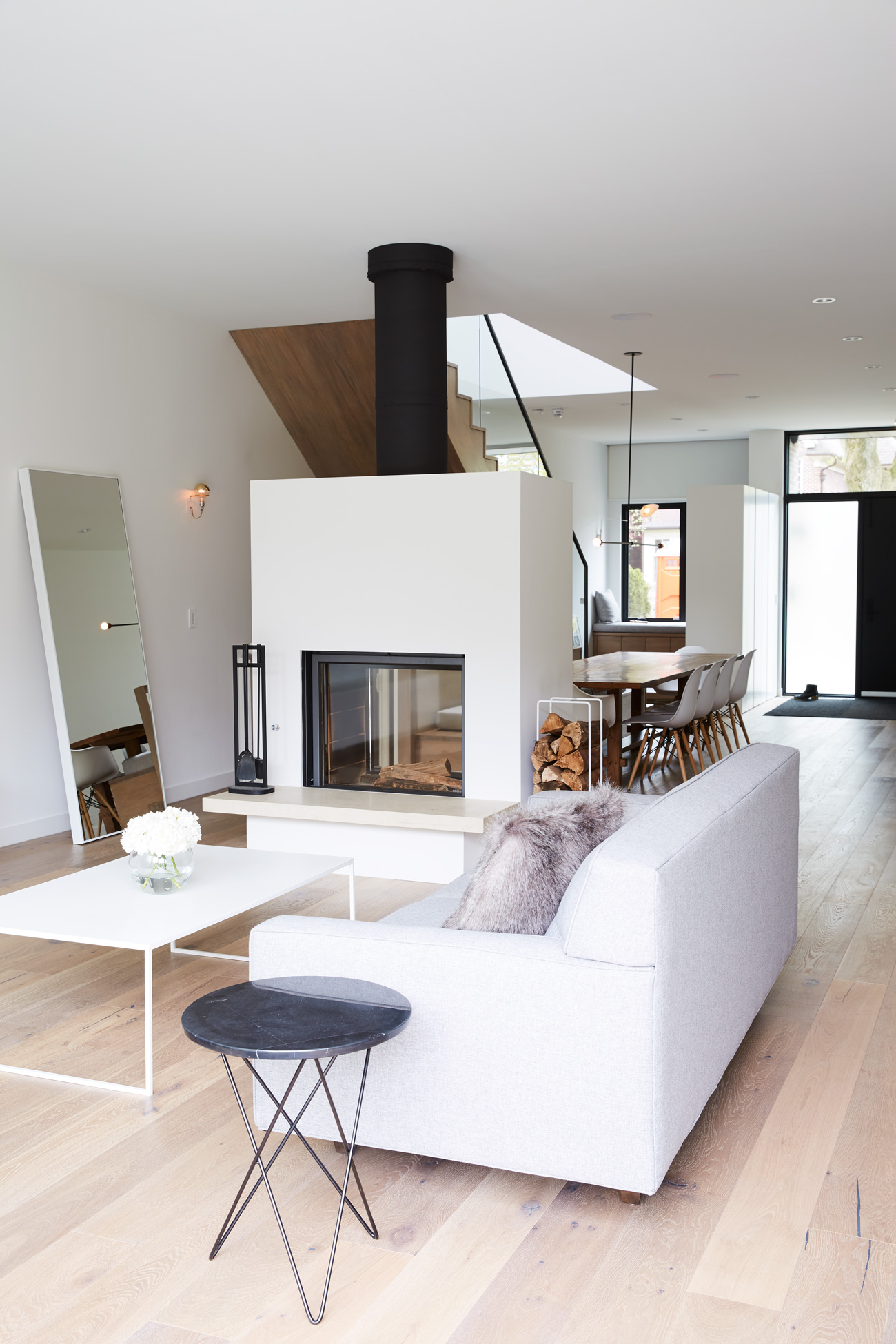 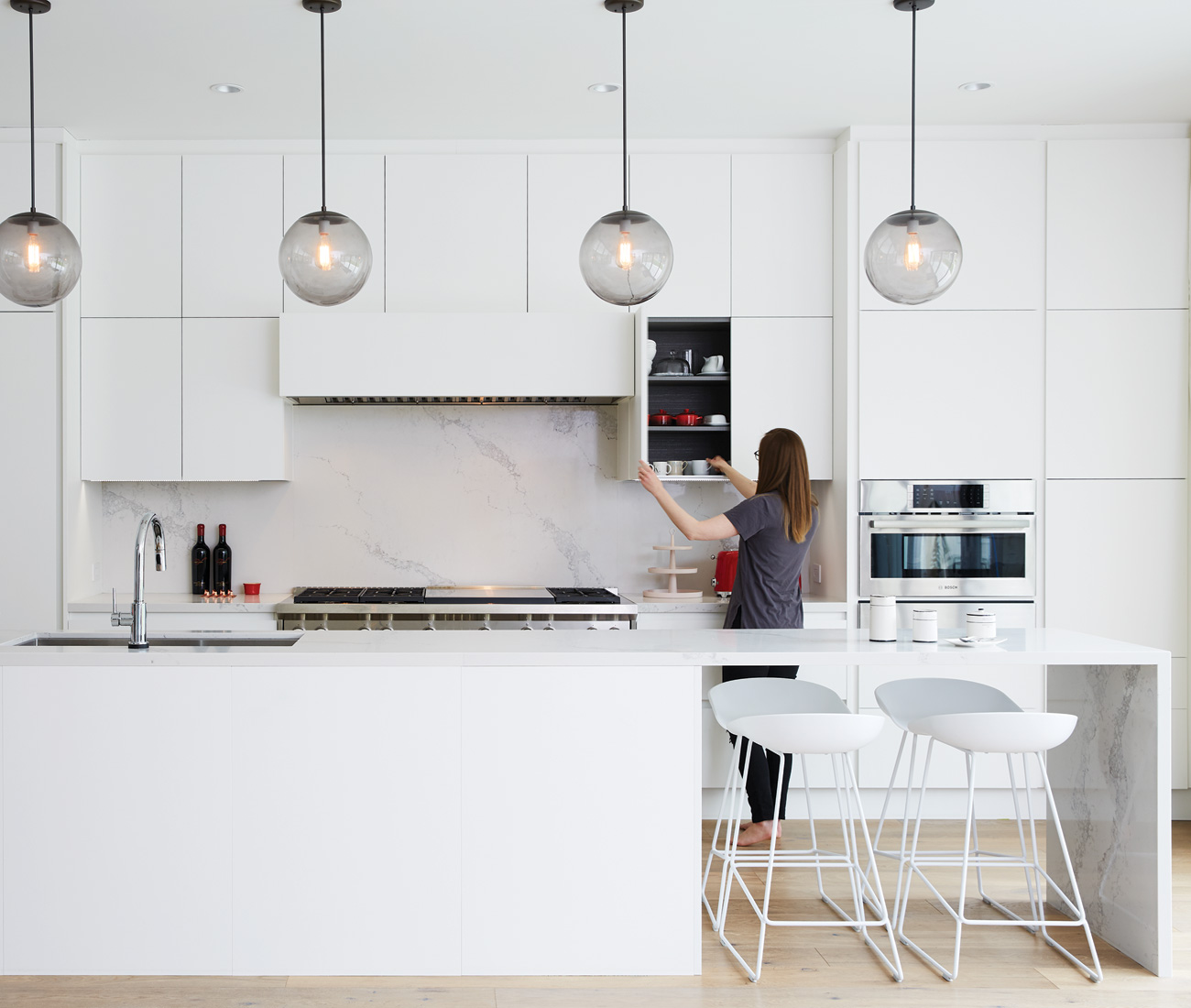 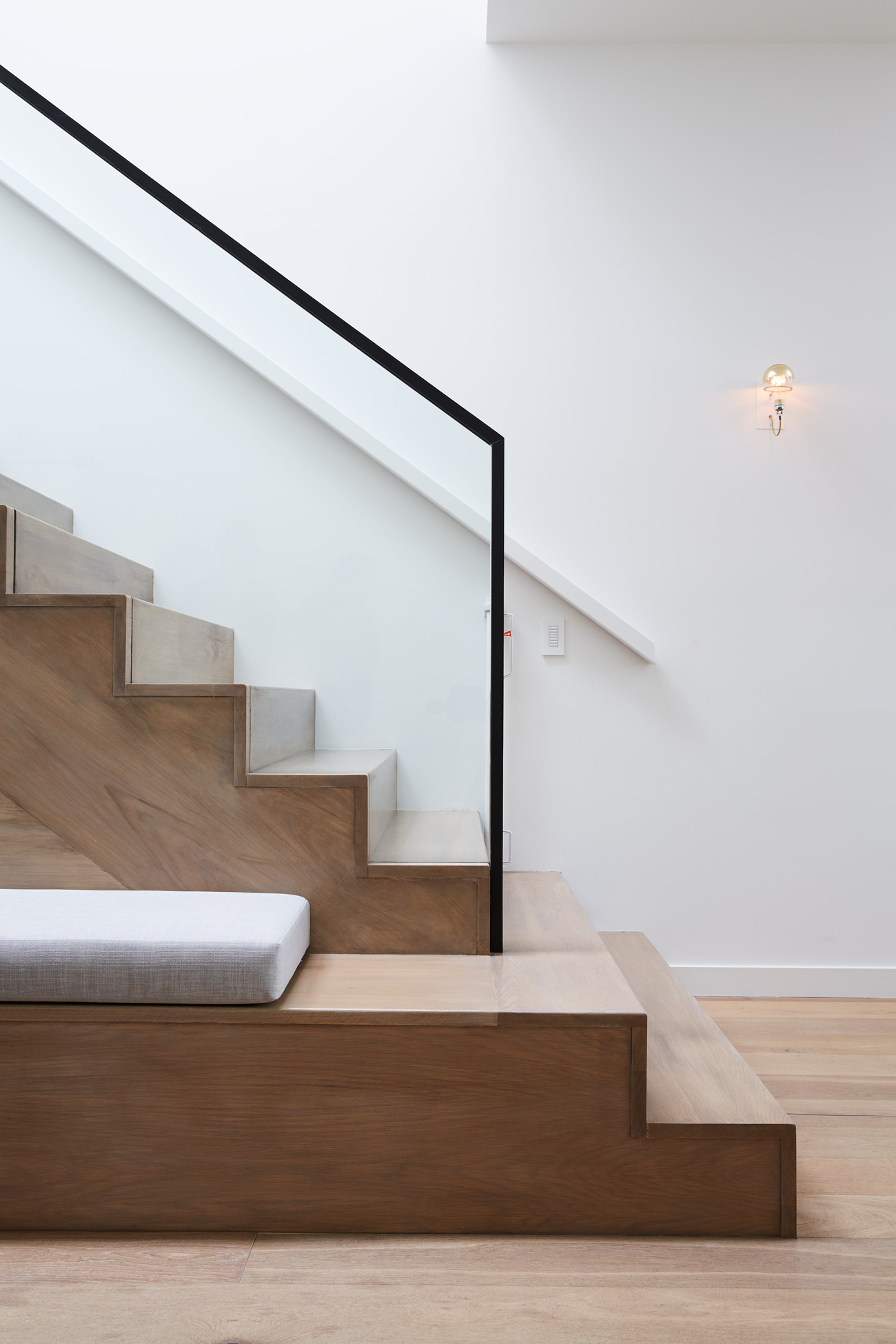 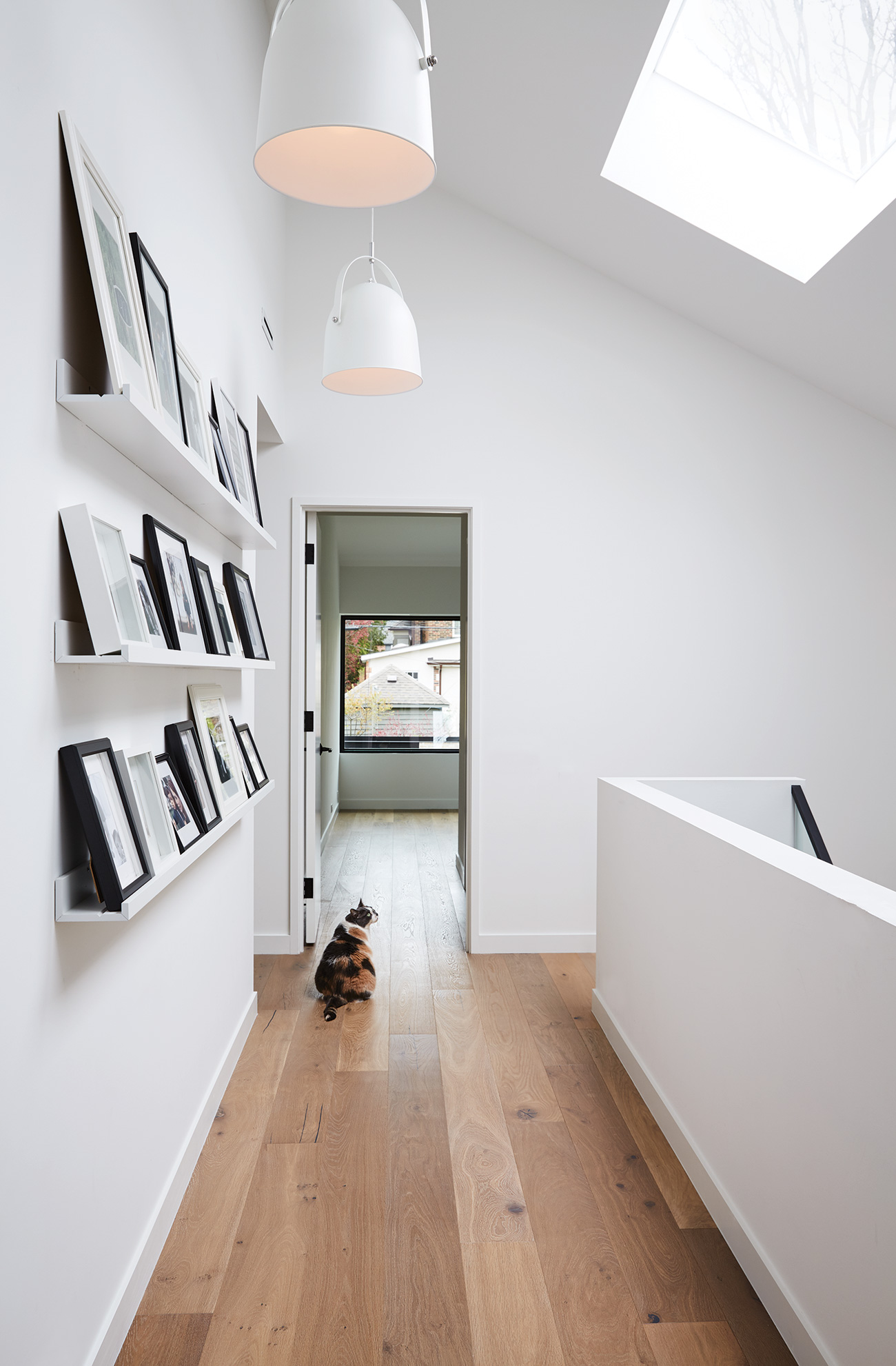 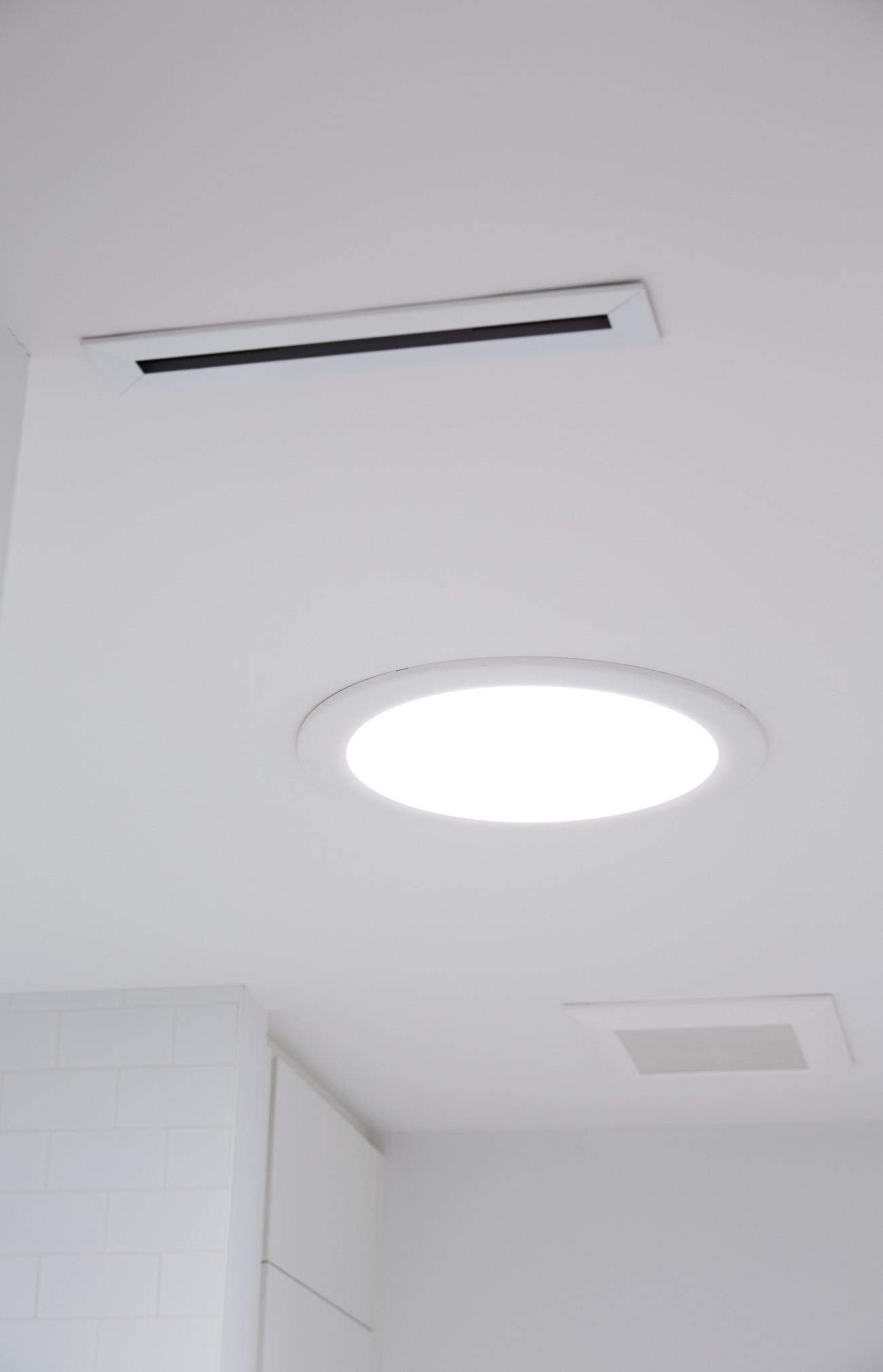 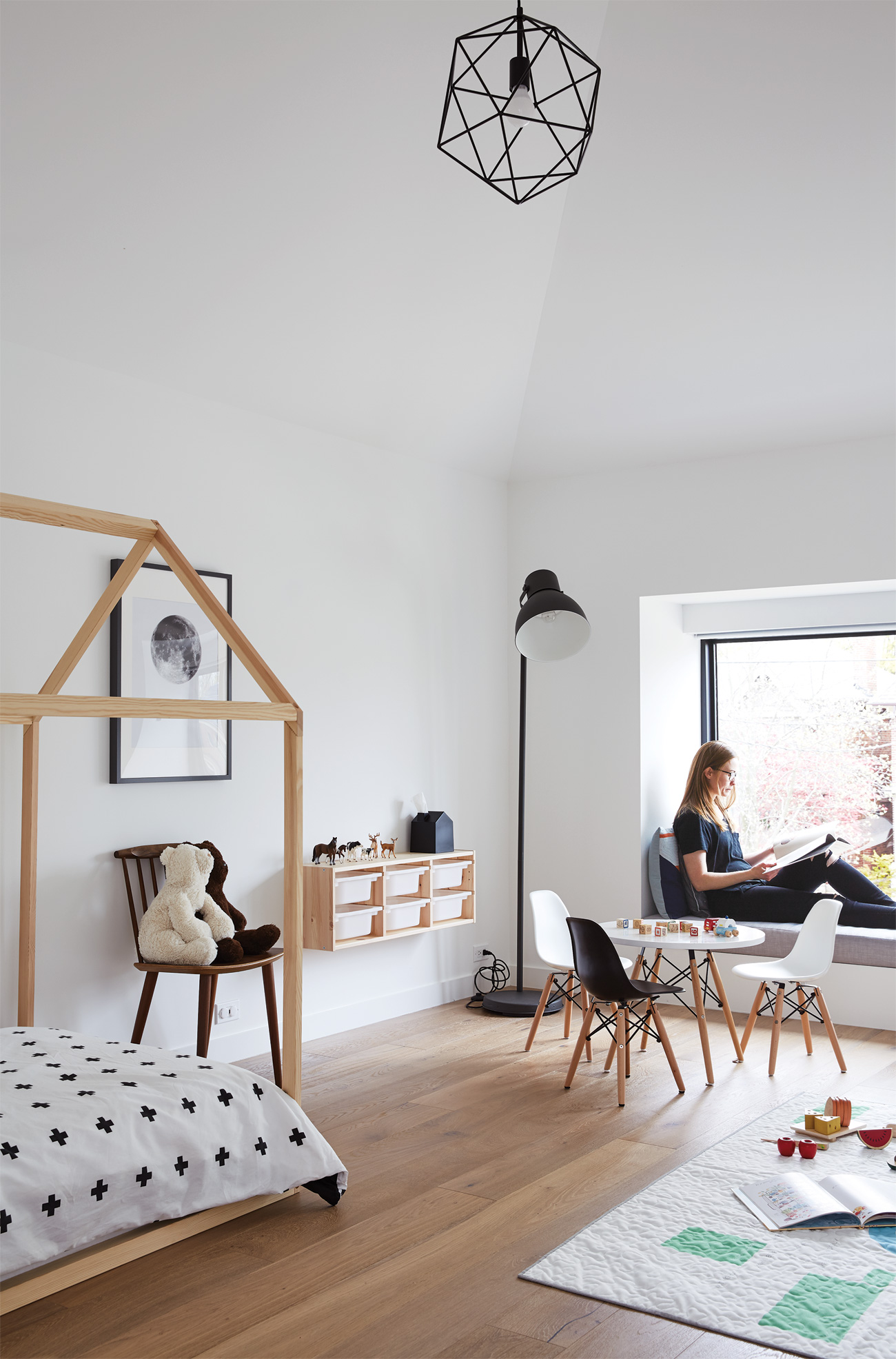 The low sills on the second floor, created by Loewen’s pop-out windows, make for cozy reading nooks. Furniture from Kids at Home and Etsy. 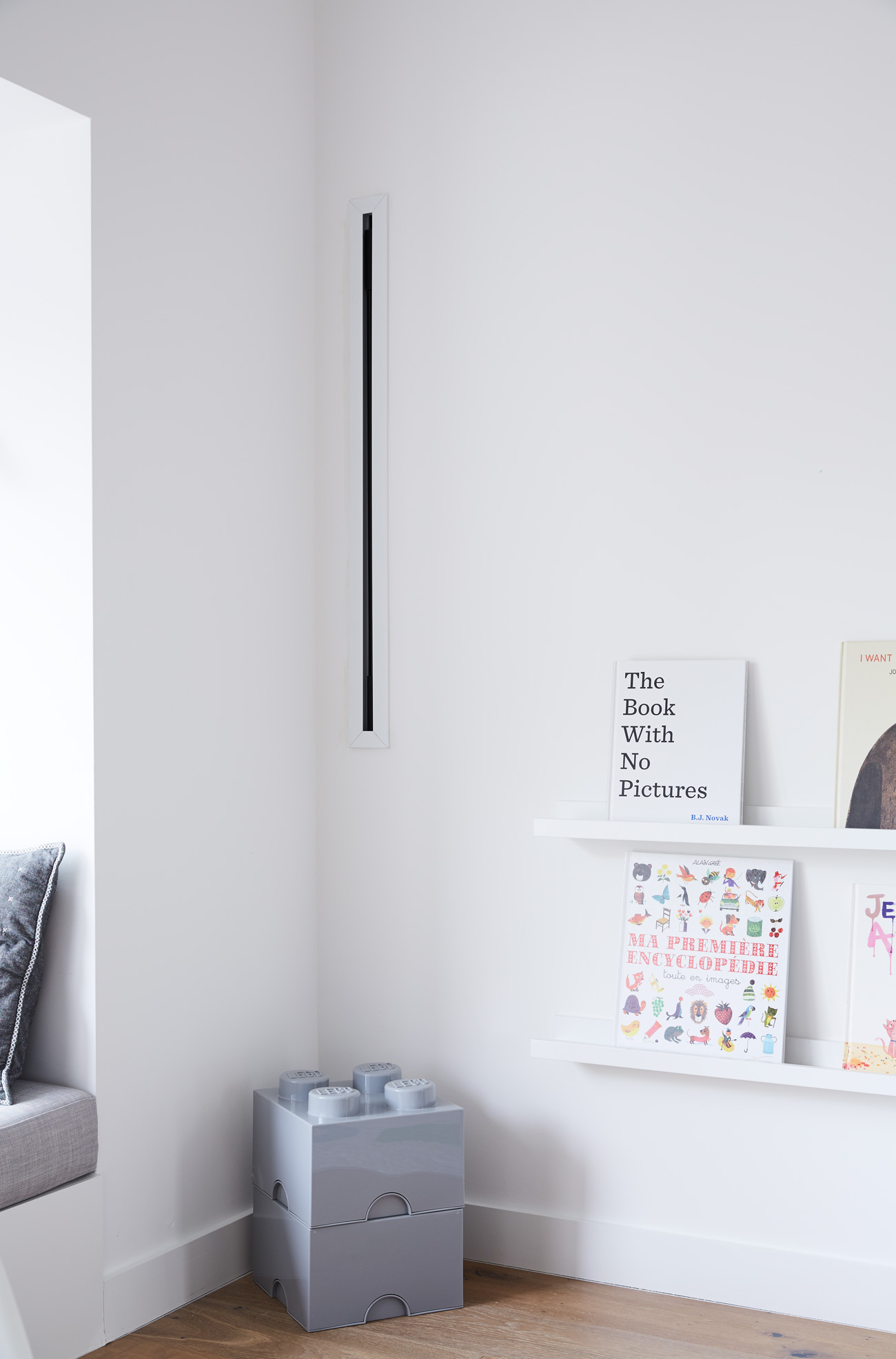 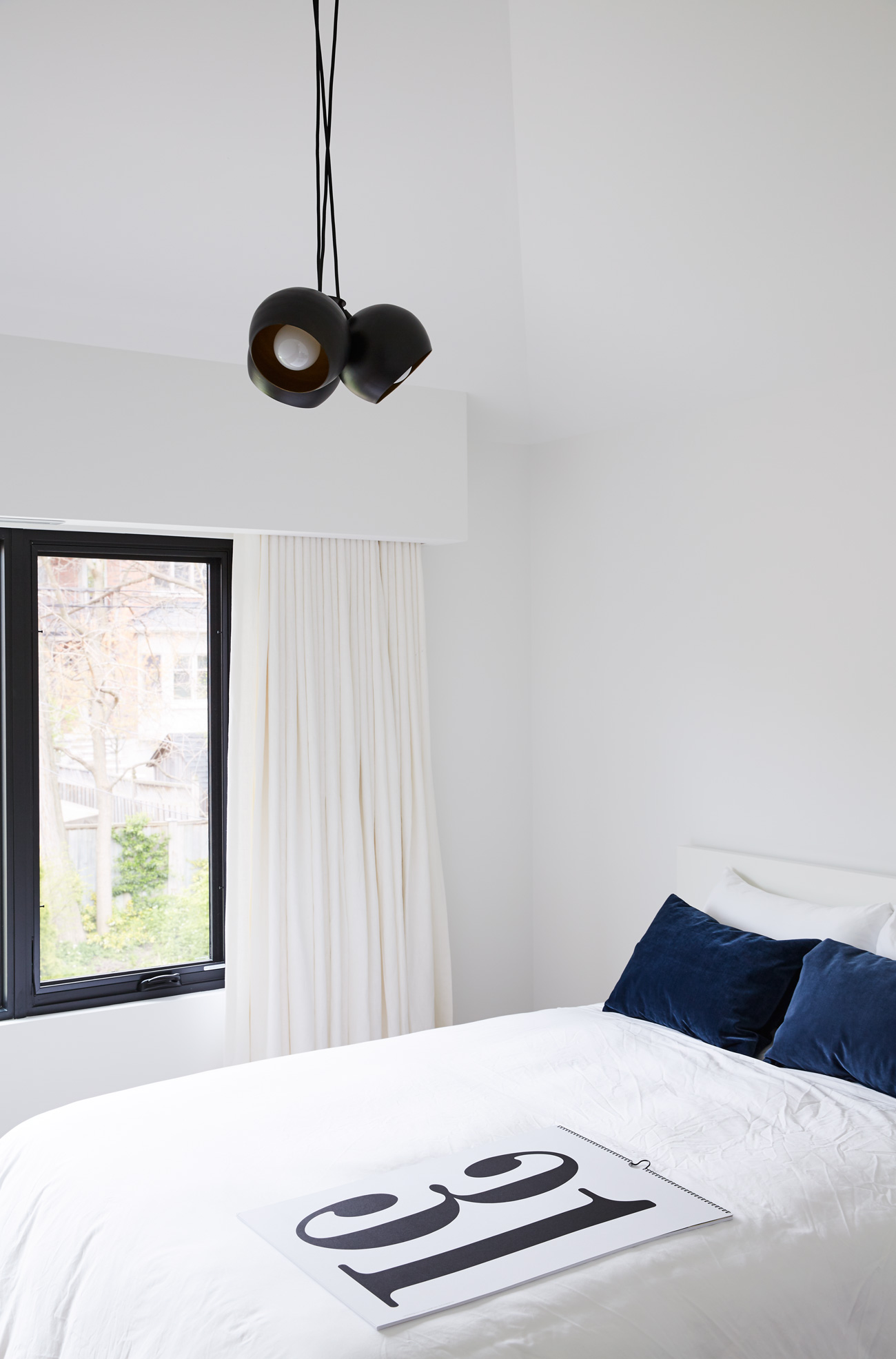 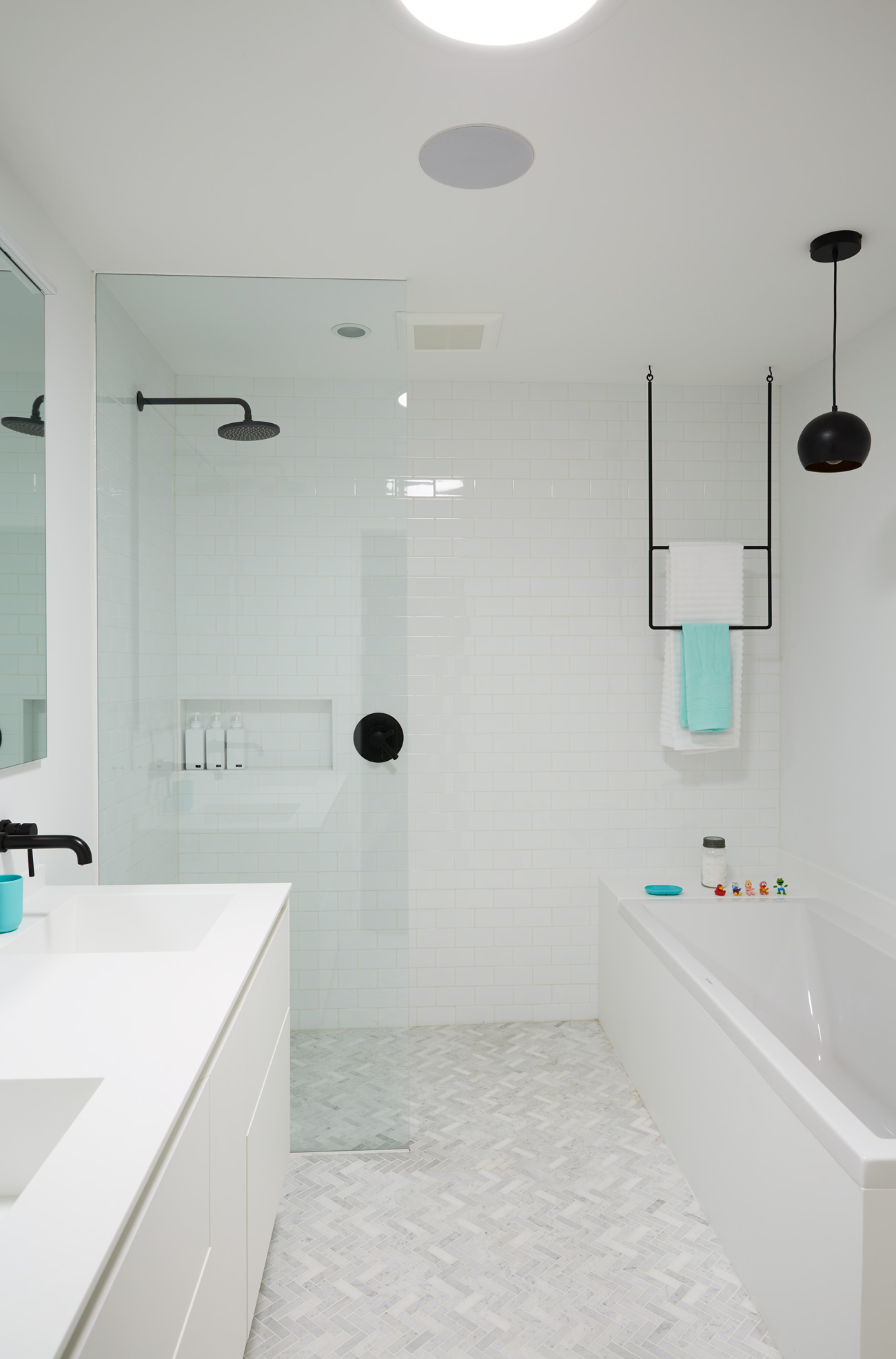 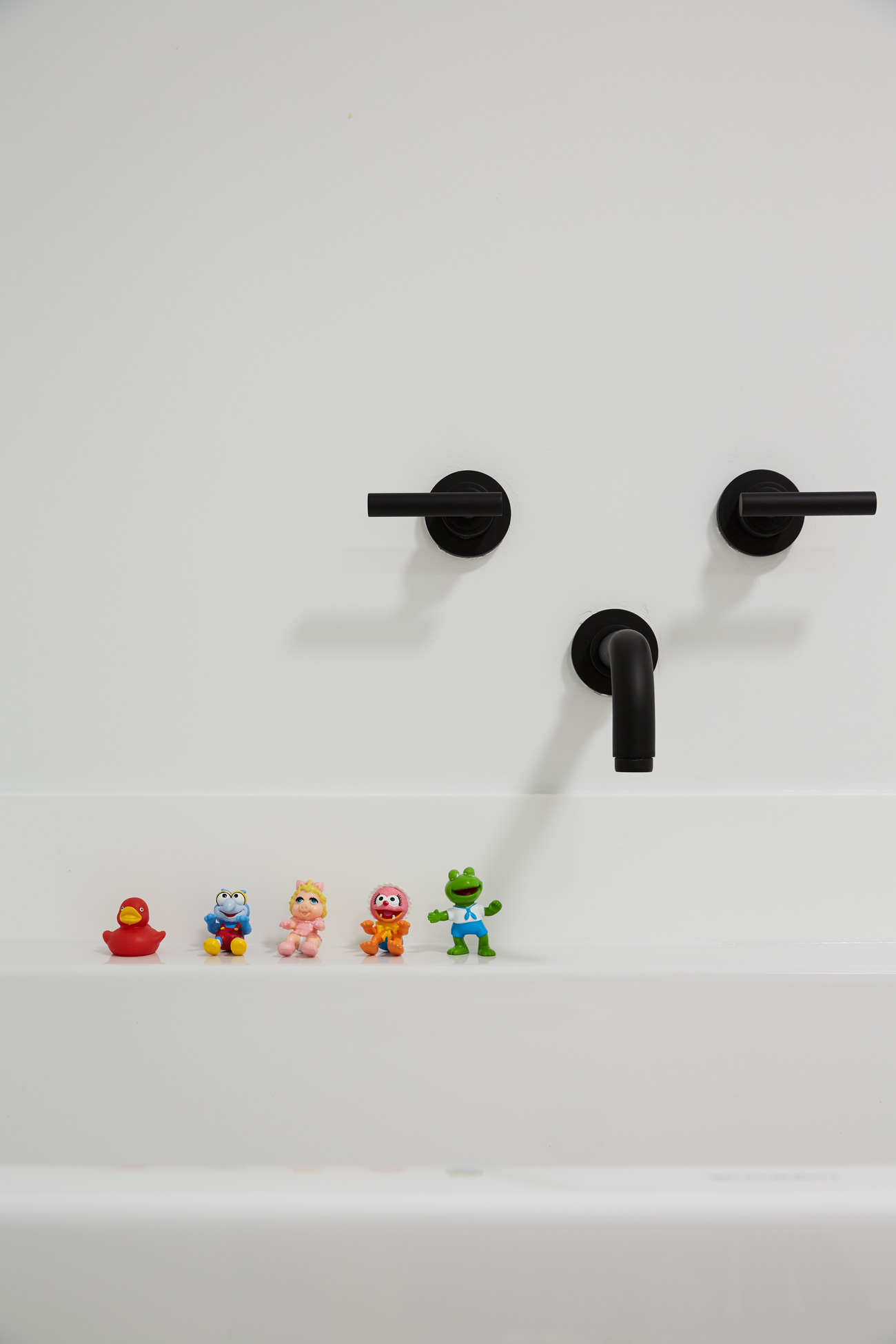 Sixteen Degree may be a new studio, but the principals are hardly rookies. Architects Stephanie Vermeulen and Kelly Doyle spent eight years at an established, local firm, striking out on their own after becoming fast friends. A jewellery store, a brewery and a winery are a few of the stunning non-residential projects they’ve since crafted together. “Because we’re a small firm, we do all the work ourselves,” says Vermeulen. “If issues arise on-site, we can solve them easily.”

Happily, their first residential design, a five-bedroom in Leaside, was hassle-free. As it turned out, the owners – Marisa and John, who also have a toddler – shared the architects’ taste for uncomplicated interiors, down to an affinity for sharp black accents. The three-year-old firm, whose name is a nod to Toronto’s wonky grid set 16 degrees west of true north, crafted the contemporary home with herringbone-detailed brick so it wouldn’t look out of place in the established neighbourhood. 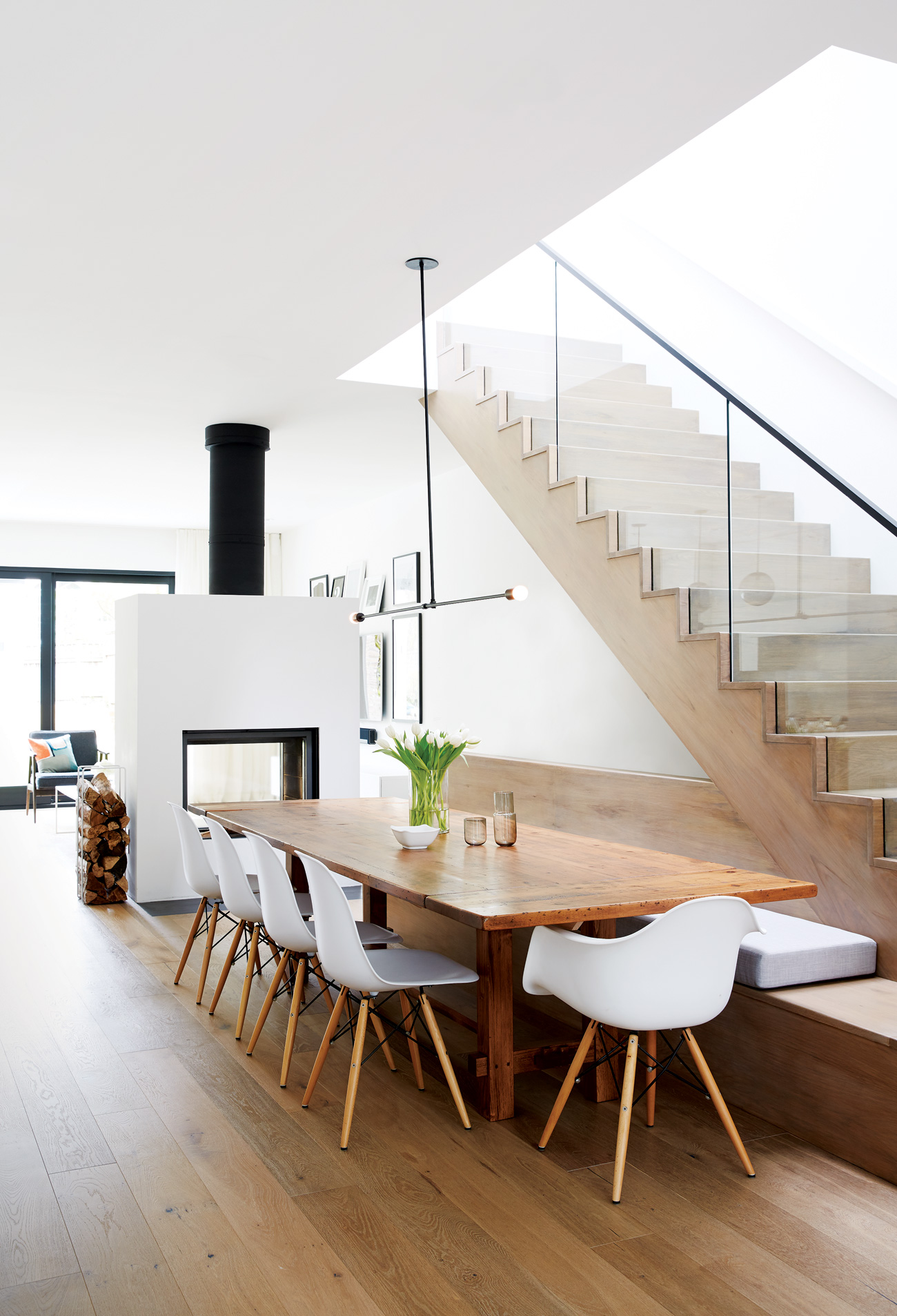 The challenge was how to fit a series of spaces into a compact, open-concept footprint. Previously, the clients had lived in airy lofts and loved them for entertaining, so they were not keen on chopping up the main floor of the 280-square-metre house. And so, instead of walls, striking divisions demarcate each zone. “Large open floor plans actually feel smaller when the entire area is revealed at first glance,” says Doyle. “We prefer to strategically place a few elements to control the views and encourage you to experience all corners of the space.”

To wit: a double-sided wood-burning fireplace, made by Stûv, acts as a commanding divider between the front and rear rooms, while allowing views of the backyard and the minimalist’s dream of a kitchen, which is rife with chic understated cabinetry. A brilliant moment also comes in the entryway, where floating bench seating for the table merges into the staircase. The fear was that “it would feel like you’re sitting in a corridor,” says Smith, but skylights and glazing around the front door take care of that, flooding the space with natural light.

A sunbeam from the skylight leads upstairs to the generous landing, which offers a reprieve and is as important to the architects as the rooms beyond. “We didn’t want it to feel like you’re in this tight maze filtering into each individual space,” says Doyle. The bedrooms aren’t huge but cathedral ceilings trick the eye into thinking otherwise. A walk-in closet is outfitted, like two of the three bathrooms, with solar tubes to quell the windowless darkness – yet another smart flourish in this exceedingly well-planned home, where every detail has been considered, proving that you really can have it all if you’re creative enough.

Originally published in our Fall 2017 Issue as A Perfect Fit.