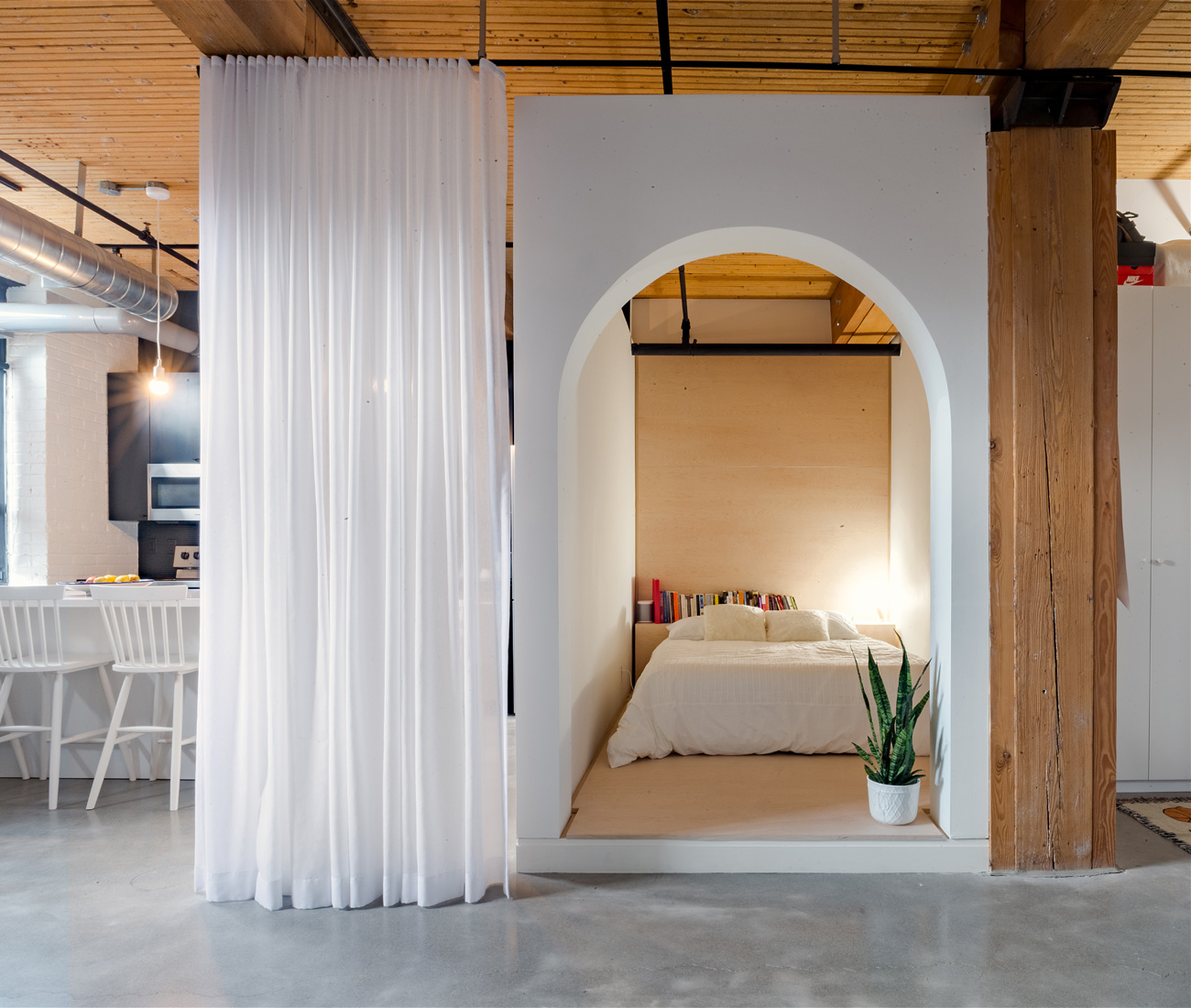 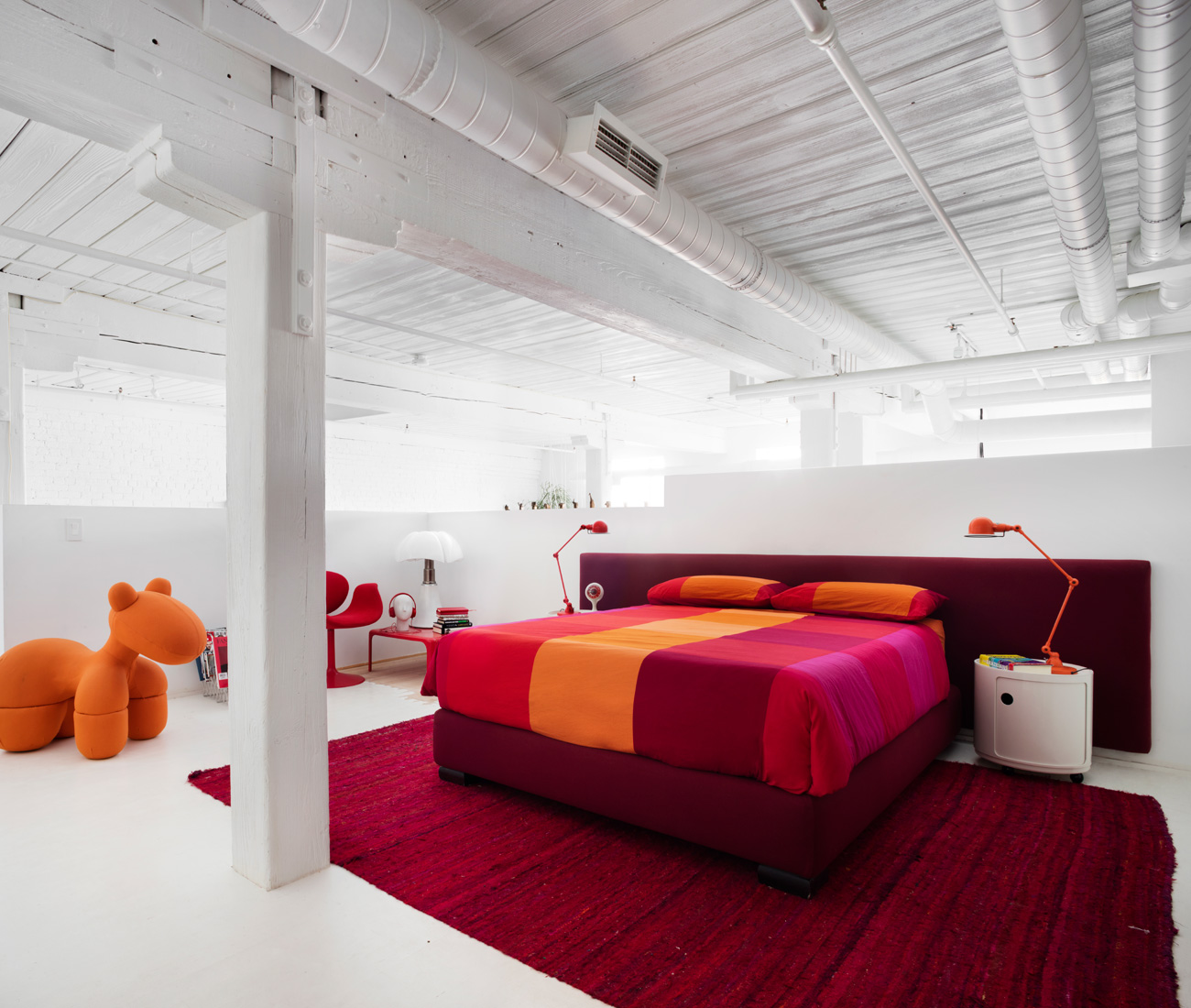 1 Groovy, Baby – 135 square metres on Queen West
When interior designer and architect Stephane Chamard discovered a unit available in the Candy Factory – a warehouse turned condo building his husband had long admired – he jumped at the chance to try out loft living. To maximize light in the north-facing unit, Chamard painted it entirely white, erasing the orange-y look of the pinewood floors and ceiling. Then, he reintroduced colour through super-saturated furnishings, using different hues to define each room in the open-concept space. With blue and green dominating the downstairs living area, the mezzanine bedroom required its own bold shade. 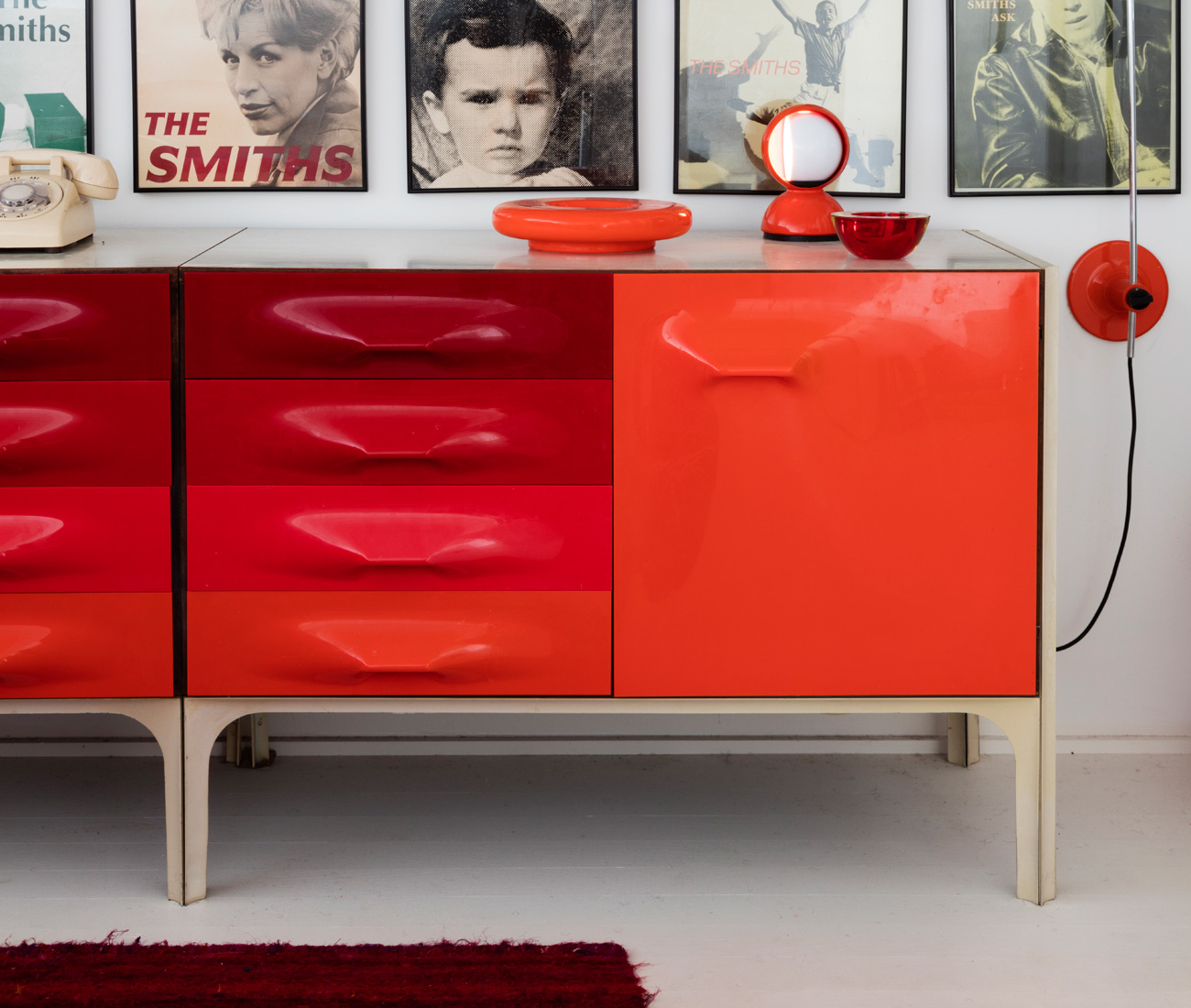 After encountering a wealth of orange pieces from the ’60s and ’70s at nearby shop Atomic Design, Chamard decided to dedicate his sleeping quarters entirely to that side of the colour wheel. A vintage multi-tonal dresser by French designer Raymond Loewy is the pièce de résistance, grounding the room’s monochromatic palette. But on top of the colour treatment, a variety of textures ensure the space also feels richly layered – glossy plastic end tables and angular Jielde lamps juxtapose matte textiles, such as an Elte rug made from antique saris and a custom flannel head-board. The stepped half-wall behind the bed shields it from the downstairs living room while still allowing natural light in – and provides a perch for a collection of ’70s-era silver animal sculptures by Dansk, also from Atomic Design. In the corner of the room, a cheeky fabric pony by Eero Aarnio serves as a handy station to lay one’s clothes at day’s end. Meanwhile, on the wall, a grid of The Smiths album covers is an ode to the couple’s love of nodding off to moody British ballads. 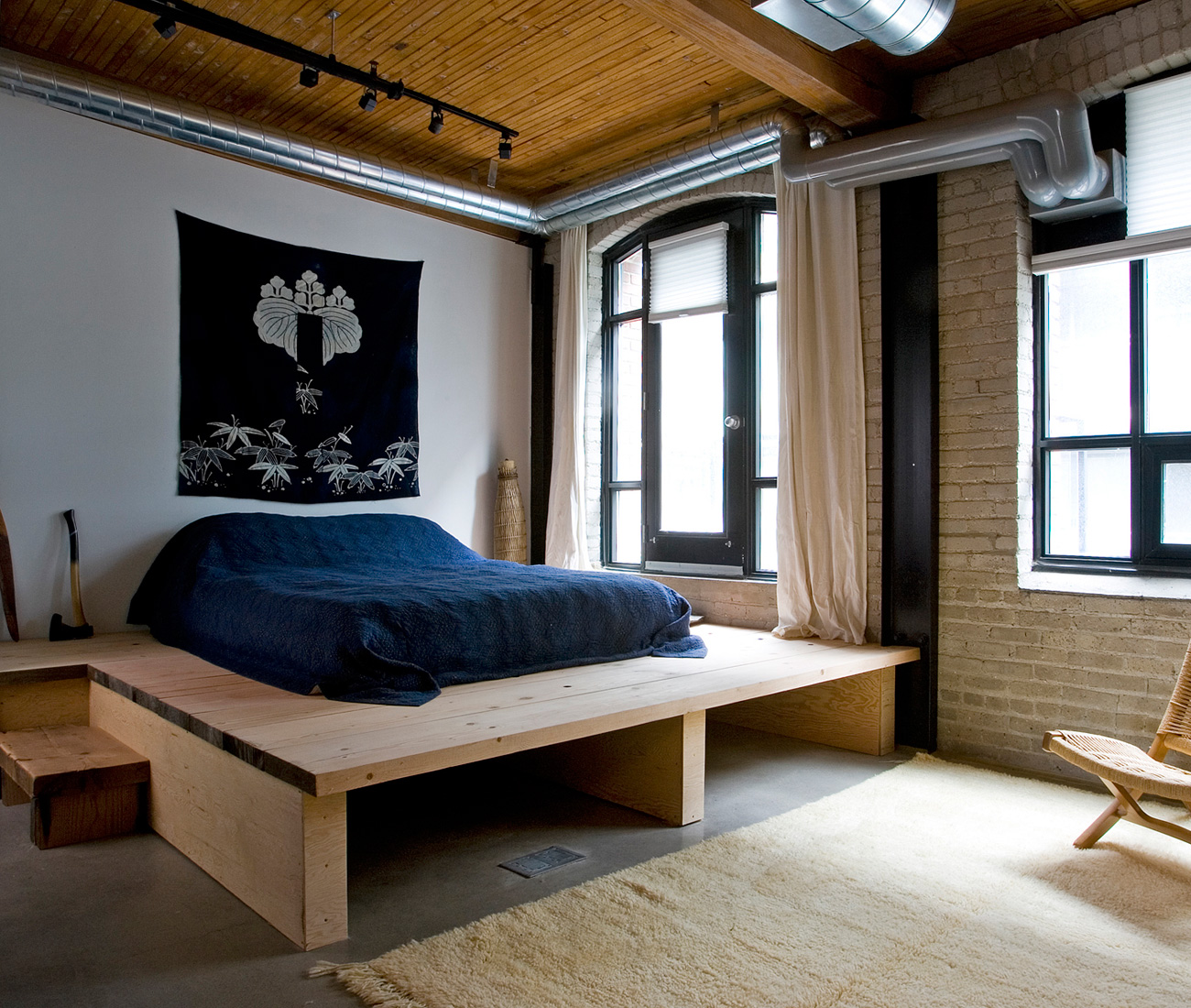 2 Stage Presence – 110 square metres in Leslieville
On a quest to refresh his digs, a globe-trotting Google exec called up a fellow loft owner whose style he admired: Atelier Nomade’s Alex Jowett, known for his rugged rope lighting and handsomely painted canoe paddles. The designer’s calmed-down rock ’n’ roll sensibility gave him an immediate appreciation for one of the unit’s most distinctive quirks: originally home to a musician, the condo was broken up by a central platform once used for informal jam sessions. While Jowett acknowledged that the stage’s awkward positioning meant it had to go, he was inspired to build a similar structure in the bedroom area. He was also keen to introduce more storage, vowing to devise a suitable hiding spot for the vacuum cleaner left out in plain sight during each of his visits. 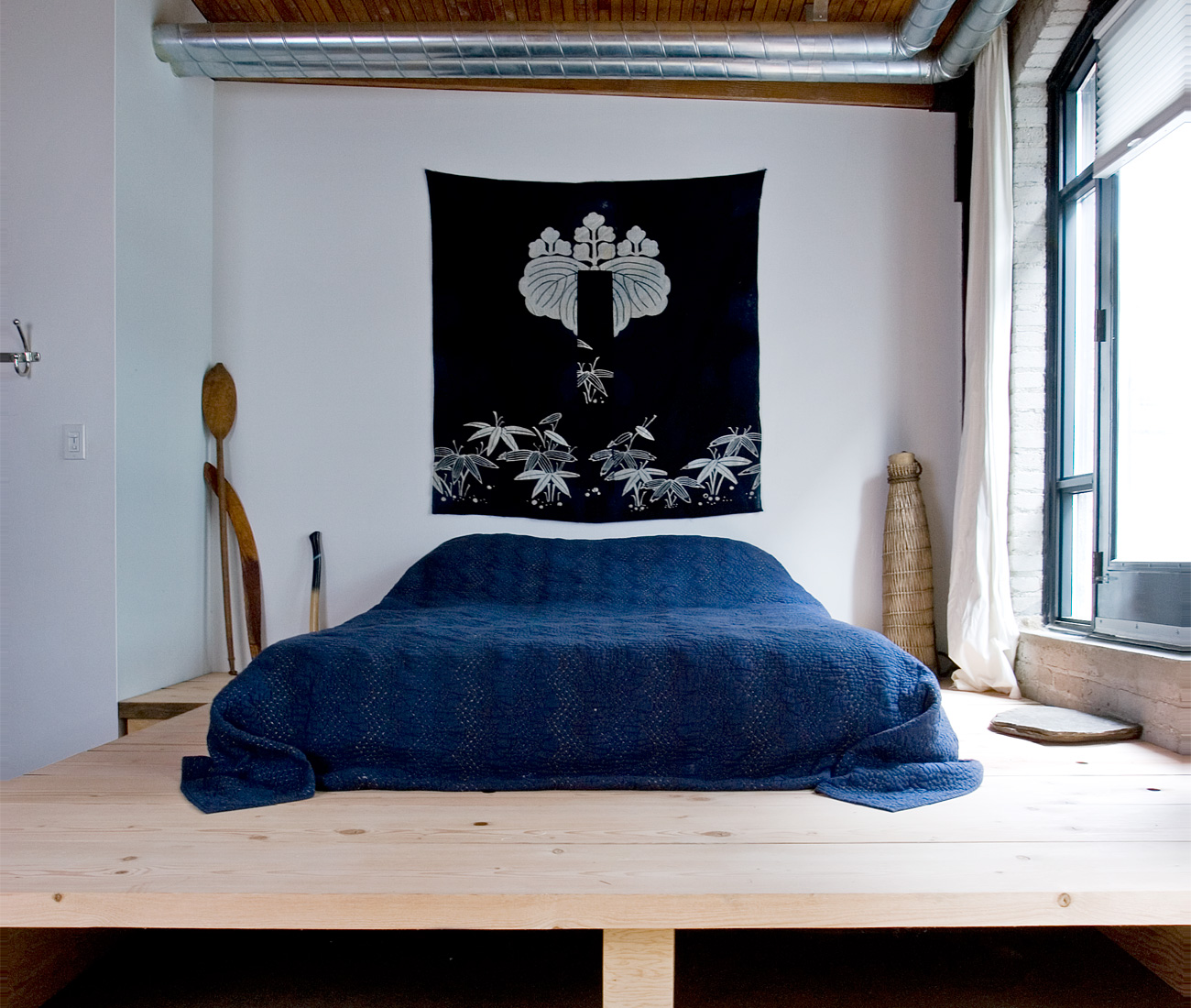 By moving centre stage to the northwest corner, Jowett refines the sleeping area’s flow. The balcony, once reached via a small and clunky staircase, is now but a step up from the three-by-three-metre raised floor that’s both super-sized bedframe and patio landing. Extra-wide planks give the structure a sturdy feel, softened by the lightness of the Douglas fir planks. Accent pieces in earthy tones and natural materials add rugged character and reflect the client’s many passport stamps. An indigo boro textile from Japan hangs behind the bed, while tucked to one side is a bell jar-shaped lamp Jowett fabricated from an eel trap from France. As for that vacuum? It’s now discreetly stashed under the platform.

3 Inside the Box – 70 square metres in Riverdale
A young professional moving back to Toronto from a shared apartment in NYC craved a home that reflected her playful personality. Before bidding on a Broadview Avenue loft, she brought along Studio AC to assess the unit’s potential. What they walked into was one generous room with a dated kitchen occupying more than half the footprint. A lover of takeout dinners and fun frocks, the buyer sought a revamped configuration that prioritized her closet and sleeping quarters. The architects gave the OK and started dreaming up an inner sanctum that would make its own stylish statement. 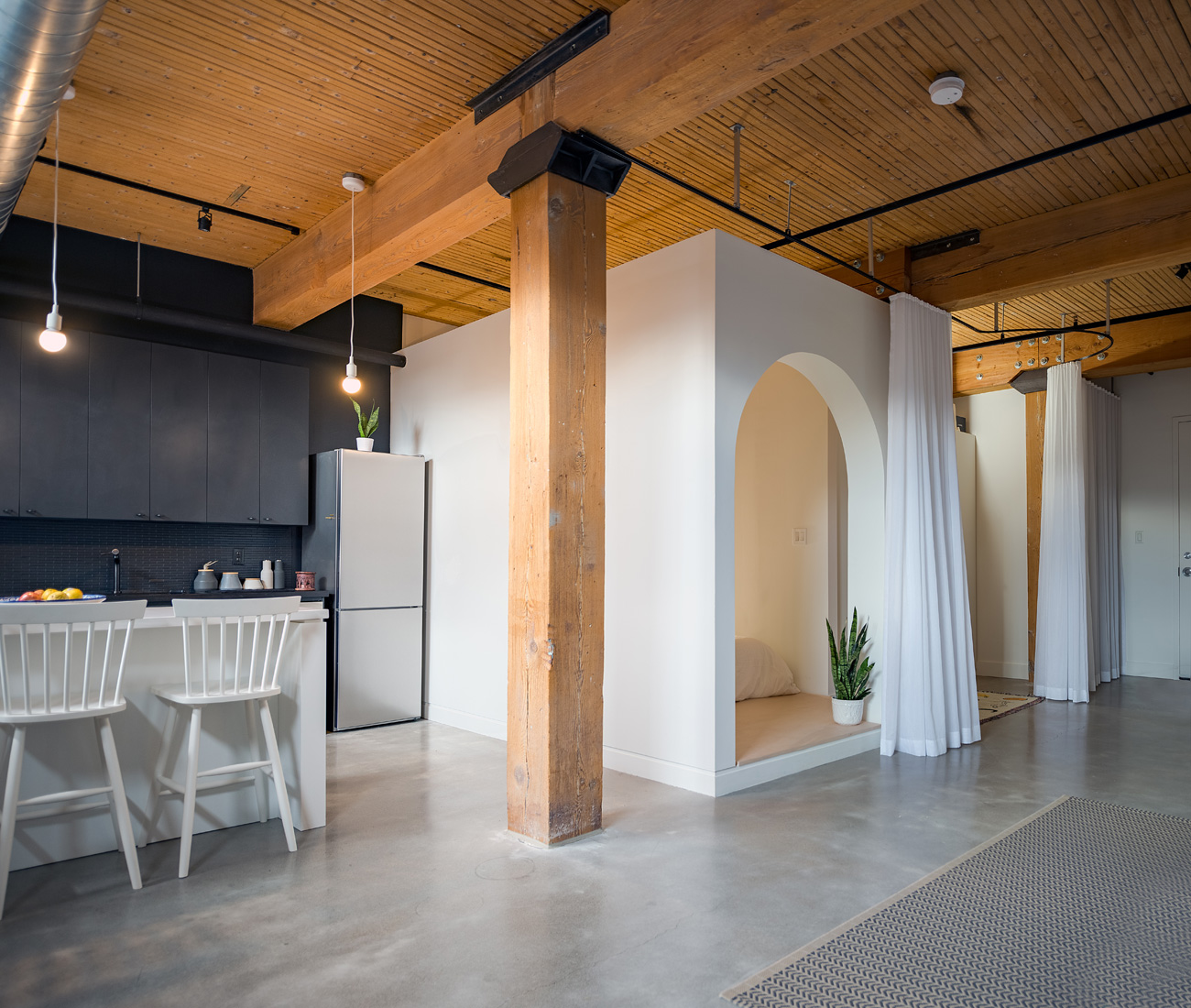 Inspired by shots of iconic architecture spotted on the client’s Instagram account, Studio AC built a white boudoir enclosure with a Mediterranean-style arched doorway. The structure’s three-quarter-height walls keep with the loft’s open feel, but a raised birch plywood floor establishes the nook as a distinct, intimate zone. And while a curtain can be drawn to close off the room, the so-called “bed box” gets pride of place across from the sofa to become the condo’s main conversation piece. In a subtle touch, the curve of the curtain track, which loops in front of the closet cabinetry, matches the curve of the bedroom doorway. The smooth arcs lend softness to an otherwise industrial space.