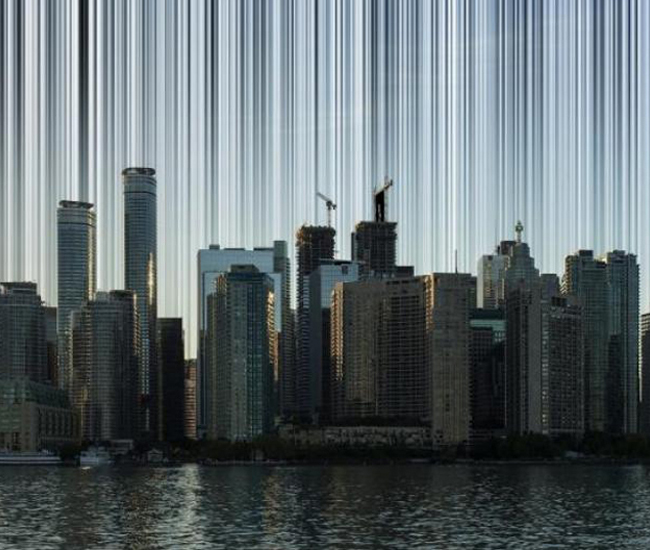 A conceptual image for Electrosmog Toronto, which will use lasers and projectors to represent the invisible electronic transmissions constantly traveling throughout the modern metropolis. On display at Harbourfront Centre.
Share Tweet Pin Email Print

When the sun goes down, the art comes out

This Saturday, dusk-to-dawn art festival Nuit Blanche once again transforms Toronto with inventive installations that encourage art lovers to stay up into the wee hours of the morning.

This year’s four feature shows, which cluster a curated mix of works in a few key areas of downtown, are based on the themes of nostalgia, metamorphosis, oblivion and the sky. Additional, independent projects are spread out all across the city to encourage further exploration.

Below, we take a look at some of the evening’s top attractions. 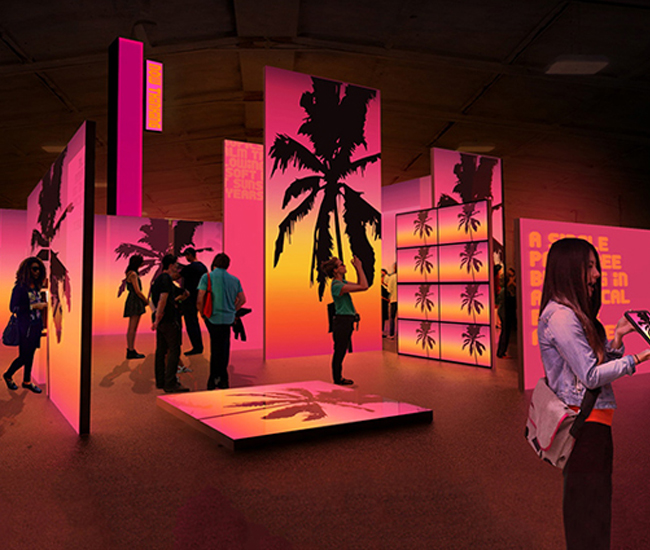 Ch-ch-changes are at the heart of this exhibition of 10 projects curated by New York’s Camille Hong Xin. It’s an especially fitting theme in an age where technological advances and urban development are rapidly reshaping our way of life. Artist KURT’s Everyone Thinks the Same Thought, for example, demonstrates the strong lure of the herd mentality in a digital era. Projections, screens and speakers are all synchronized to convey a single mesmerizing idea, which changes every few minutes. As visitors share photos of the installation on social media, the reach and influence of its suggested ideas becomes even greater. 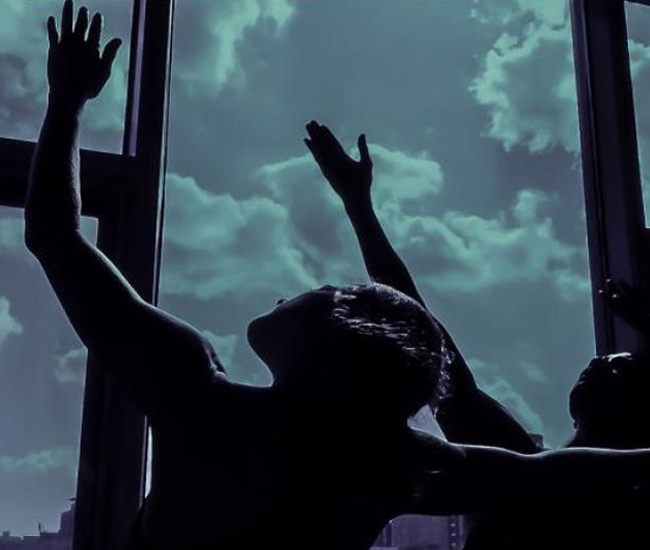 2 Facing the Sky
Along the waterfront

While light pollution may prevent Nuit Blanche attendees from spotting the Big Dipper as they traverse the city, curator Louise Déry is doing her part to ensure that the cosmos still play a role in the evening’s festivities. In one work, dancers stationed in a large glass box at Harbourfront Centre will perform a routine by Paul-André Fortier inspired by the movement of constellations. Of course, there’s also a modern twist: the dancers are equipped with cell phones, and will occasionally share messages with the audience against the glass walls of the box.

Fortier’s performance is accompanied by Samuel Bianchini’s Pas de deux pas de lighting installation, another heavenly reinterpretation of traditional dance. The installation riffs on the romantic duets common in ballets such as Swan Lake, using two spotlights in place of dancers to perform a choreographed routine in the night sky. Perhaps some star-crossed lovers-to-be will strike up their first conversation in its dazzling glow. 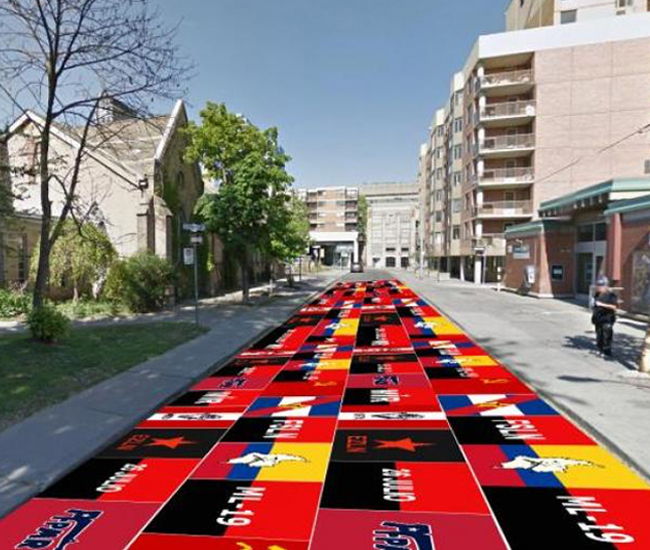 3 Militant Nostalgia
Along John Street between Dundas and Front streets

Frustrated with the political climate of the 21st century, Chilean curator Paco Barragán indulges in some wistful longing for another era. But many of the 10 projects he groups together here grapple with the disconnect between collective history and individual memories, revealing the past to be every bit as complex as the present. For example, Arturo Duclos’s Utopia’s Ghost, shown above, covers a portion of John Street with flags used by Venezuela’s Tupamaros and other failed radical movements that have polarizing legacies.

Other works address the passage of time more literally. In The Museum of Broken Watches, Trevor Mahovsky and Rhonda Weppler present a collection of 720 timepieces, each stopped at a different minute. An automated spotlight illuminates the watch that depicts the current time – ushering in a bright future for broken objects from the past. 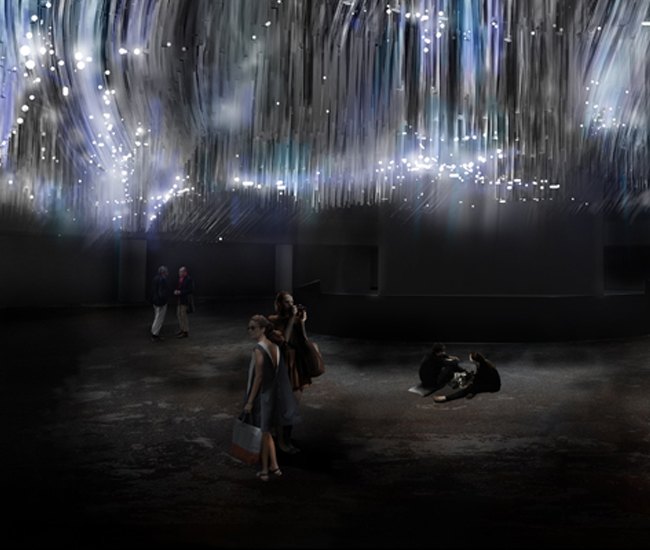 Curated by OCAD U Associate Dean Michael Prokopow and York U prof Janine Marchessault, this psychedelic wonderland includes a contribution by Director X, the cinematic visionary behind Drake’s Hotline Bling music video. For his latest masterpiece, the filmmaker turns his attention to a star that shines even brighter than Drizzy: the sun. Sequences that chart the life cycle of the celestial wonder will be projected onto a massive, 13 metre-wide globe. The out-of-this-world orb is accompanied by the ethereal textile canopy by Philip Beesley shown above, as well as Floria Sigismondi’s video probing the subconscious. 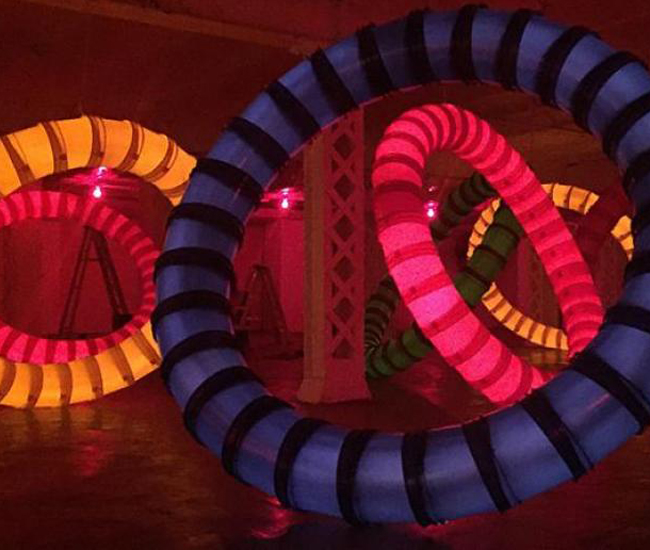 5 Independent Projects
An additional 58 projects – including everything from theatrical performances, sculptural installations, video projections and soundscapes – take place in all corners of the downtown core and beyond. Dereck Revington, the lighting designer behind the Bloor Viaduct’s Luminous Veil LED installation, collaborates with the Toronto Lighting Collaborative to cast a dramatic new spotlight on landscaping features in Victoria Memorial Park, while at the Drake Hotel, New York artist Jason Peters introduces glowing worm-like rings assembled from plastic buckets. With installations on display from 6:58pm-7am, there’s plenty of time to take in all manner of spectacles.