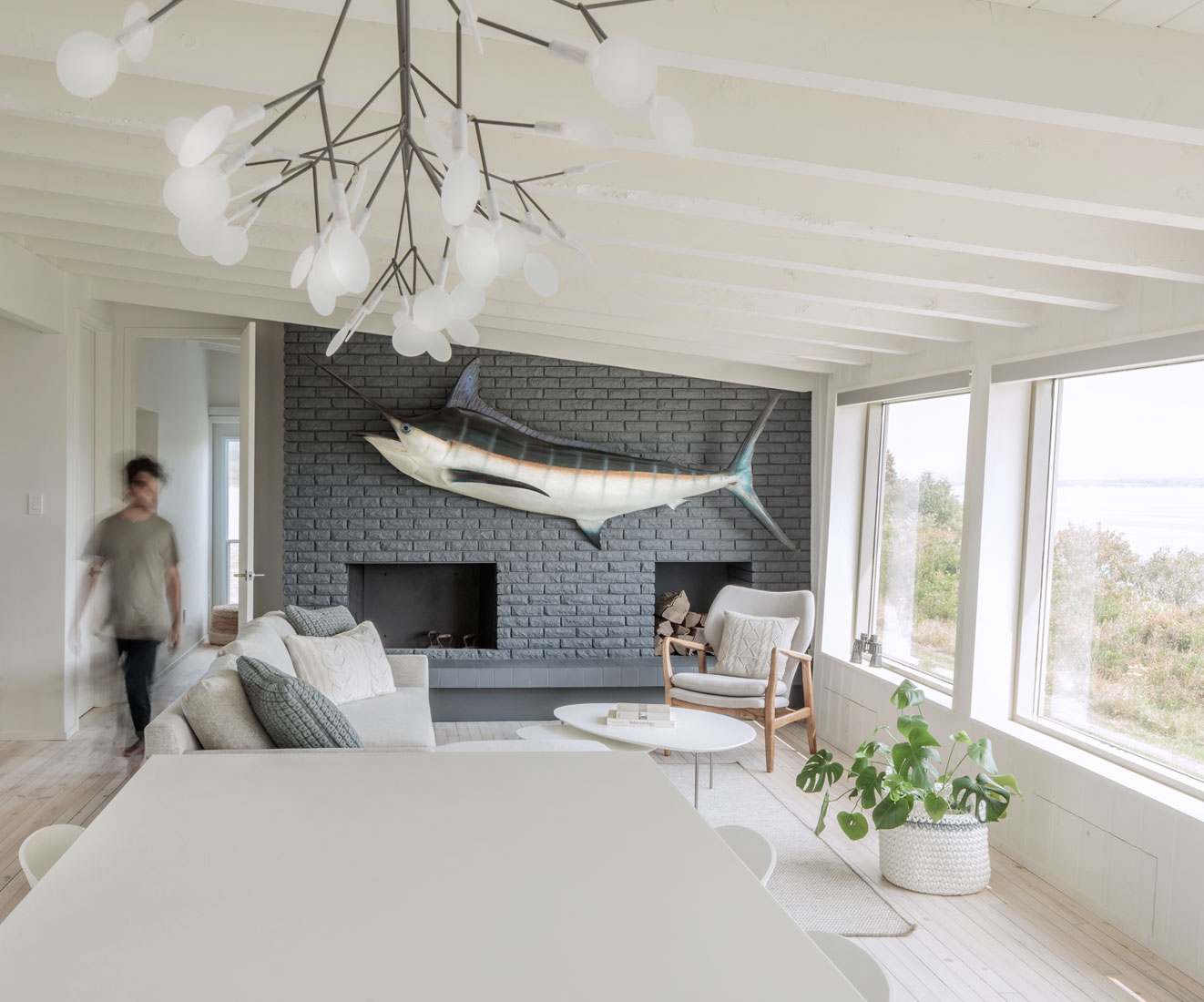 To revive a family’s dated summer home, Jacob JeBailey of Reign Architects used the oldest trick in the book: buckets of white paint (okay, and a few other trade secrets)

Harbour House is perfectly situated. Perched on a sandy peninsula in rural Nova Scotia, the tiny cottage is surrounded by lapping sea water and wind-swept, tangled flora that would lull even the most city-hardened visitor into a state of melty relaxation. Until a recent makeover, however, there were few parallels between the serene landscape and its interior.

Built by hand in 1962 by a Toronto family’s late father, the summer getaway had undergone several renovations throughout the years that, while bringing down a wall, had left muddled wood finishes and overpowering colours in their wake. After years of tinkering, the space sorely needed a unifying concept.

But for all its eccentricities, there were was much to celebrate here: Think sloped roof, exposed ceiling beams and a ship-shape row of windows overlooking the coastline. Plus, more than a generation’s worth of family memories under the slanting roof. Remodelling this space would require skill and sensitivity – as well as a fresh wash of paint.

Enter Jacob JeBailey, principal at Reign Architects, a studio based in Toronto and Nova Scotia (hello, Omar Gandhi). He was tasked with overhauling the summer home – opening up its interior and drawing in natural light – while preserving as much of the building’s winsome architectural features as possible.

To do this, he busted out several gallons of pigment. “We white-washed almost everything,” he says. That took care of the dated wood paneling on the walls and the red-stained roof rafters – instantly brightening the common rooms and bringing something of the beach inside. Next, he took the unusual step of increasing all the door openings to 2.4 metres (8 feet), as his client is over 182 centimetres (6 feet) tall. “It’s amazing how such a small move changes the flow and feel of a place,” he says.

Painting the existing fireplace a slate grey modernized it and created a focal point in the newly brilliant space. As a final aesthetic touch, he also refinished the dark-stained original floors with a Danish method of curing and oiling, giving the small home a sun-bleached, Scandinavian feel that mirrors the sandy shore.

But in the kitchen, where storage and prep space had always been scarce, paint wasn’t enough. And so, he installed a brand new Ikea kitchen and a custom 2.4 metre island. He splurged on a Heracleum light fixture from Klaus, whose form imitates a native flowering herb. Now, he says, pointing to uninterrupted views of the beach, “cooking and having breakfast in the kitchen is something else.”

And speaking of vistas, he added a new horizontal window in the dining room to coax in yet more natural light. The new westward opening allows the family to enjoy sunsets around the table, “completing a full 24-hour experiential circle that connects to the wonder of nature.” In a snug cottage full of personal history, it’s another element for future generations to enjoy — and pass along.

Need another instant getaway? You might enjoy reading A Superkül Cabin That Balances Simplicity and Comfort and This Fabulous Prefab Cottage is Inspired by the Ontario Wilderness.