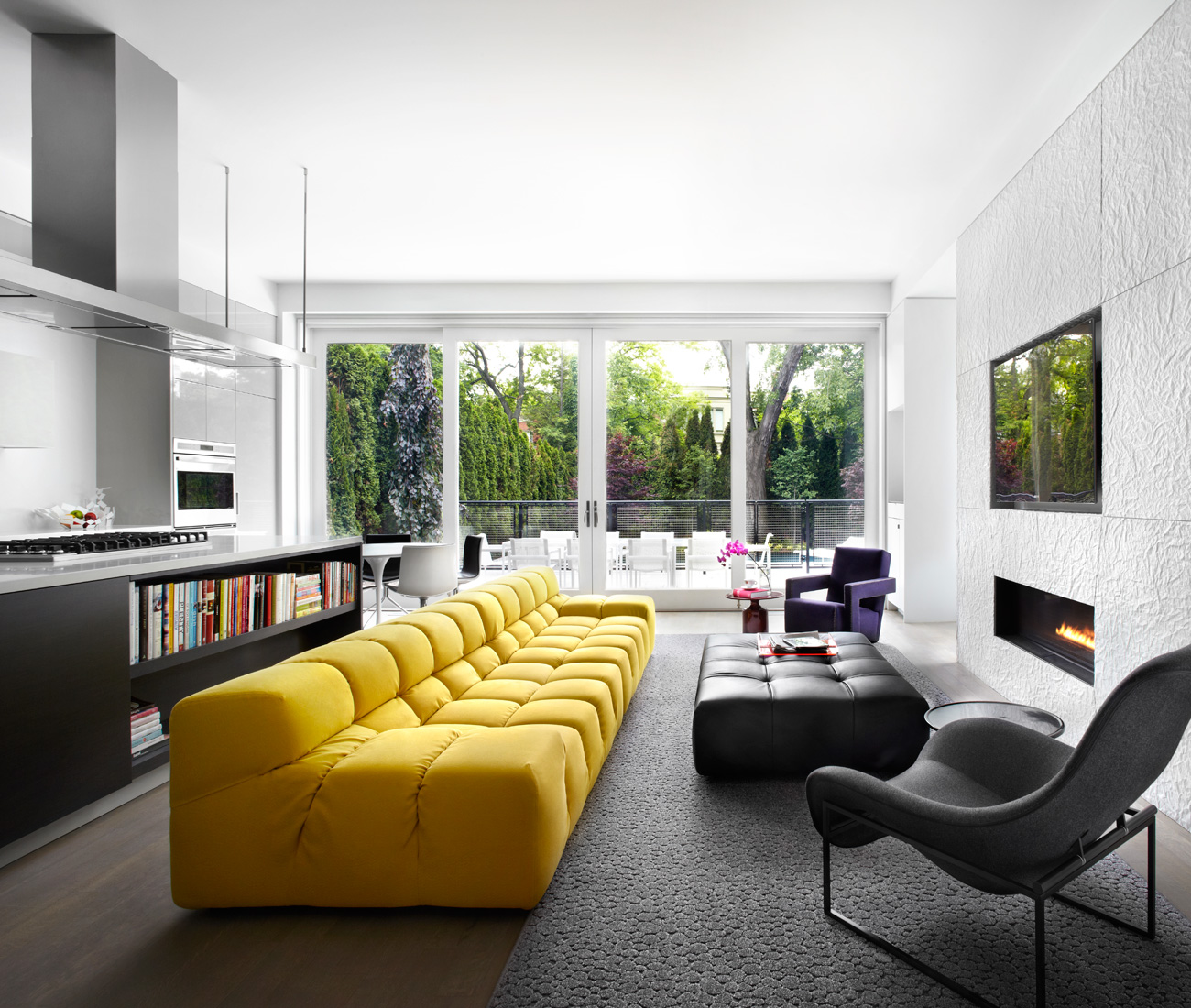 You just want to run your hands over every surface in the family room, even the fireplace surround. Reigo & Bauer clad it in concrete tiles from TAKTL, moulded to mimic crumpled paper. B&B Italia sofa and ottoman from Kiosk; Cassina chair from Italinteriors. Photo by Lisa Petrole. 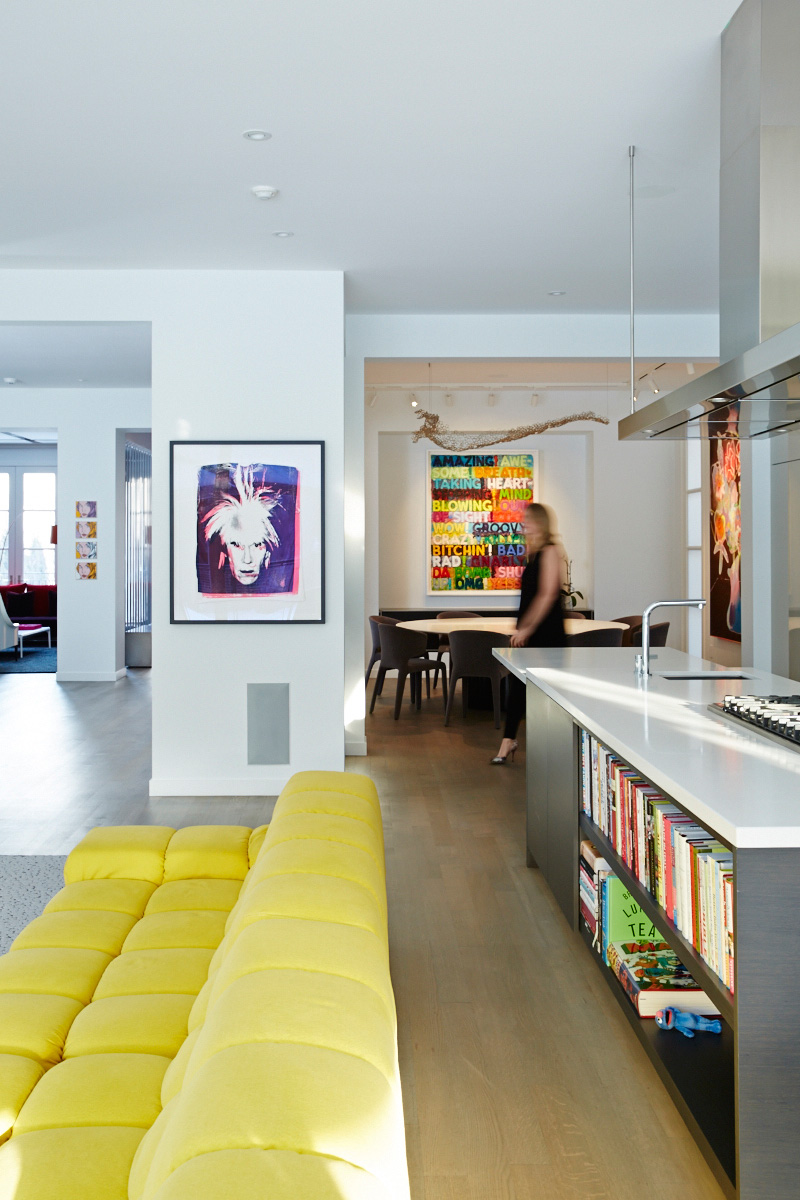 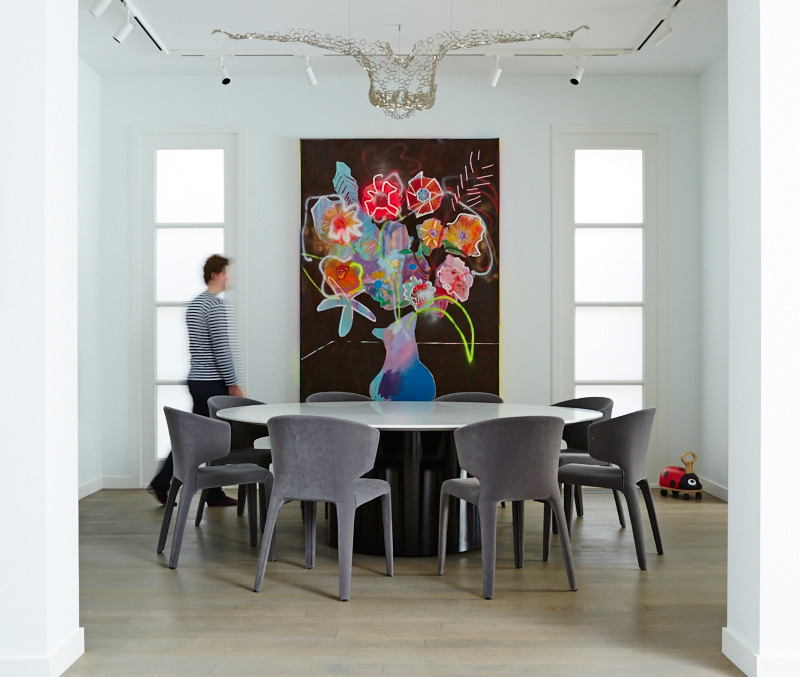 A painting by Thrush Holmes and a sculpture by Rainer Lagemann preside over the custom Corian-topped, steel-based dining table. Cassina chairs from Italinteriors. Photo by Naomi Finlay. 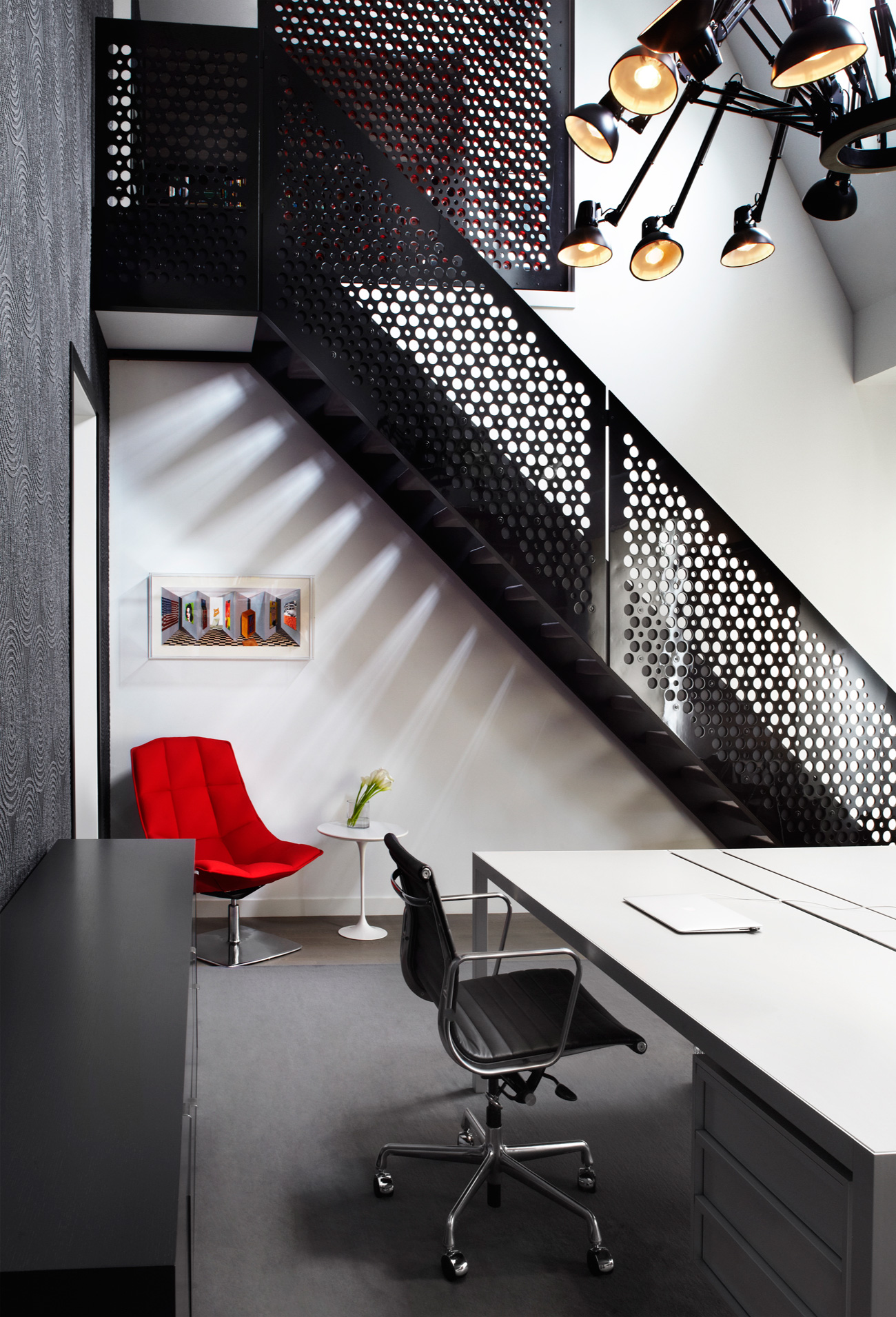 A custom staircase with red and black screens leads from the double-height office to a music room on the mezzanine. the walls are clad in sound- muffling object Carpet from are & be. moooi chandelier from Klaus. Photo by Lisa Petrole.

By Matthew Hague
Photography by Naomi Finlay and Lisa Petrole

It’s hard to imagine that a home could ever feel overly open concept. A four-bedroom Forest Hill residence, owned by a husband and wife with two young girls, was strangely that.

In 2011, the family bought the newly built 560-square-metre place because of its central location and treed, pool-filled backyard. Plus, its expansive walls were perfect for displaying an extensive collection of contemporary and modern art.

But the existing layout desperately needed definition, so the couple hired Merike and Stephen Bauer, partners at the design firm Reigo & Bauer, who are known for doing modern with a twist: clean-lined homes amped up with eccentric hues, motifs and details. In addition to their namesake practice, the couple runs Are & Be, a showroom at Dupont and Bathurst that imports and distributes experimental wall and floor coverings – everything from holographic to hand-illustrated wallpapers – that command the eye, even in spaces so large that focal points seem impossible.

The firm’s expertise with finishes was crucial to the home’s dramatic new identity. Ultimately, they used colour, texture and pattern to create a much needed sense of intimacy without changing the floor plan. On the ground level, a custom screen of sharp-edged vertical slats acts as a partition that defines the entry, where red millwork (designed by architect Michael Amantea) is a pleasing contrast to the darkly romantic backdrop of the living area beyond.

Another example of this space-defining work is in the kitchen and family room, which before the reno pooled into one another like two large bodies of water. Now, the fireplace – brilliantly textured in a tactile, crinkle-concrete panel – gives the sitting area a distinct sensibility. As does the grey rug, patterned to look like river rocks, and a beefy B&B Italia sofa in a daring bright yellow.

Up a vibrant, cobalt-blue staircase, the boldness intensifies: A third-floor TV area is sequestered by a custom black and red screen with overlapping circular patterns. The girls’ rooms are ecstatically pink and red, while the master bedroom is equal parts edgy and elegant with silver-grey wallpaper traced with puffs of smoke.

The master, including the ensuite, is especially gutsy. In fact, it’s sensual with floor-to-ceiling sheers that theatrically line a long wall. Opposite, distinct spaces for the tub, vanity, shower and water closet are defined by a large glass mosaic. Its inside and outside corners are curved, which creates a fluid effect that is unbroken from the entry through each of the spaces to the tub. Although enveloping, the walls aren’t heavy. That’s partially because the tub and vanity are divided by the most beautiful of Reigo & Bauer’s dividing screens: a laser-etched mirror. Its sinuous lines alternate between transparent and reflective. The effect is emblematic of the entire project – perfectly calibrated to both separate and connect.

Originally published in our Summer 2014 issue as More than a Feeling.