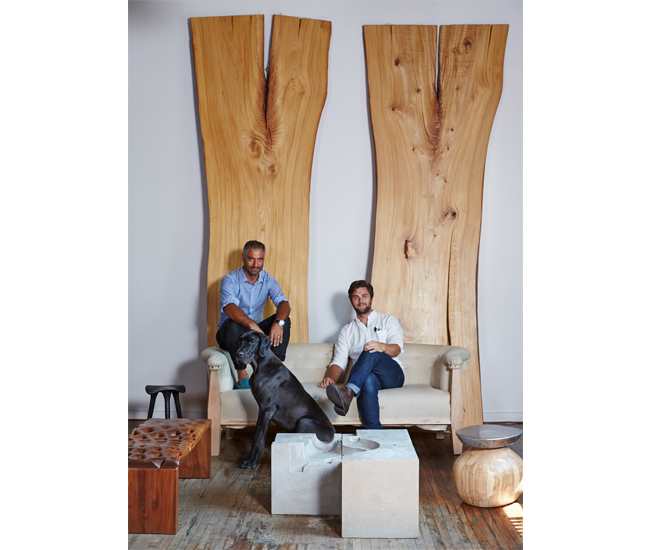 Robert Koblinsky and Jeff Forrest (with Charles) among, left to right: Stool by LMBRJK; bench by Partisans; Stacklab’s cementitious cubes and an Ash A356.0 series stool. Photo by Naomi Finlay. 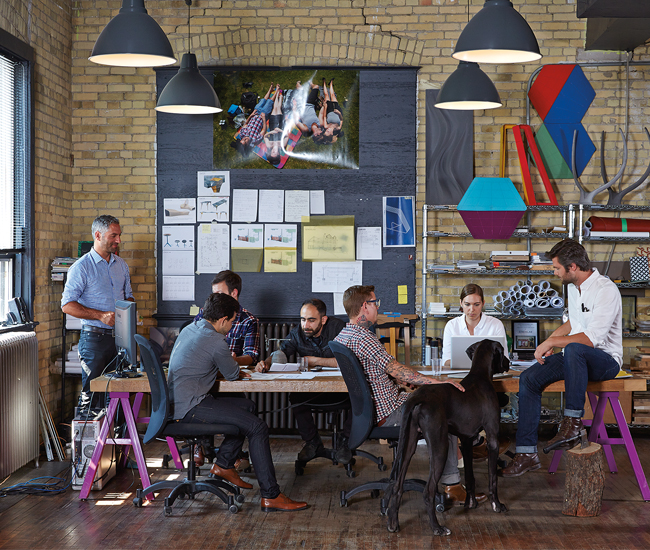 Above the shared workstation are sketches and renderings of current products, installations and architectural projects. Shelves are packed with material samples and prototypes. Photo by Naomi Finlay. 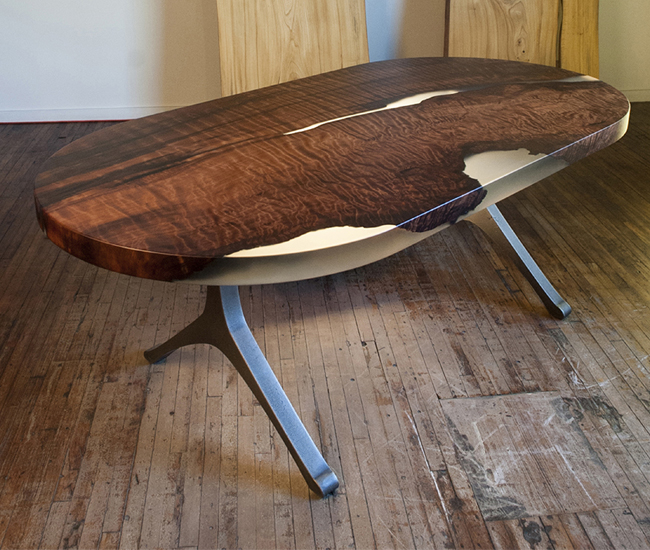 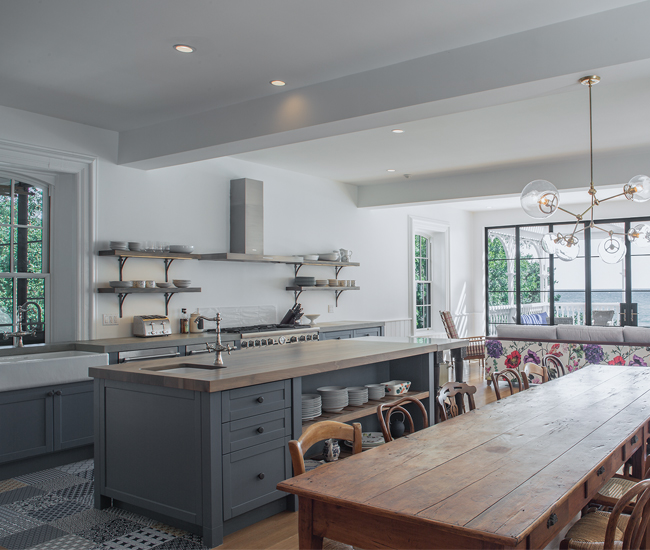 This now open-concept space steps out to a new terrace. Millwork designed and built by Stacklab. Custom sofa produced by Vogel; Spanish tiles from The Tile Store; glass doors by Bliss Nor-Am. Photo by Sean McBride. 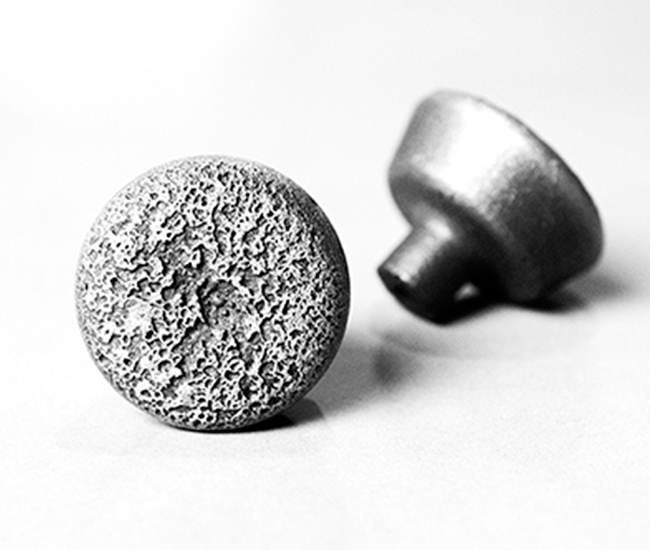 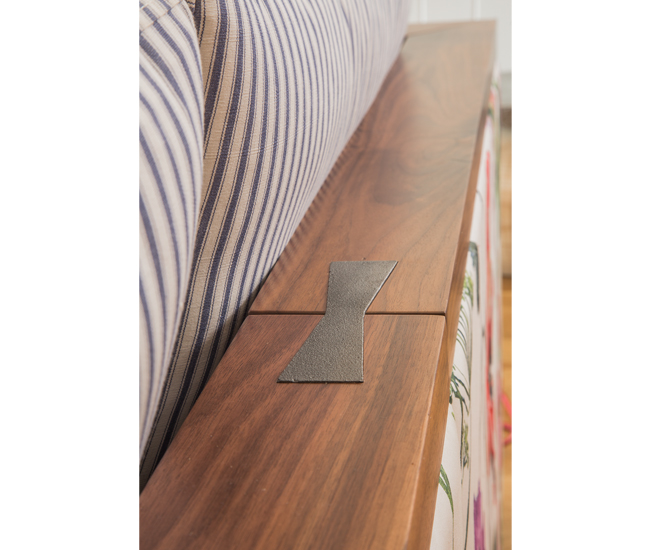 Two sections of a sofa (a collaboration with Vogel) connected with bespoke butterfly joints. Photo by Sean McBride. 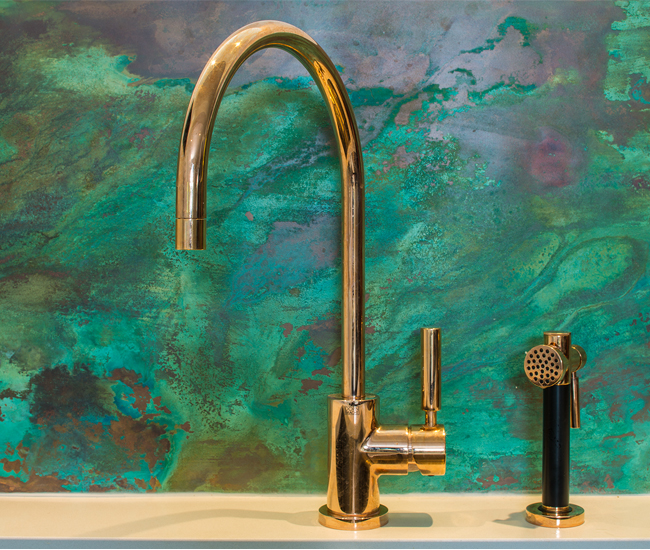 A back-splash made of oxidized and sealed copper. Photo by Sean McBride. 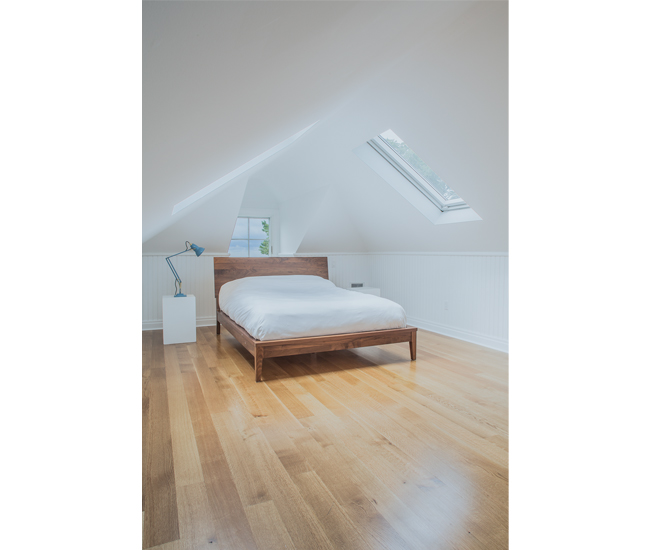 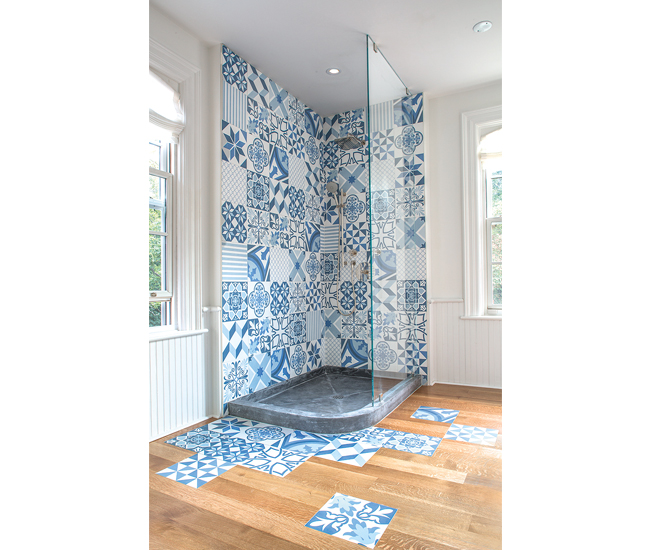 A guest bathroom on the second floor was renovated with historical elements preserved wherever possible. The new custom shower features a precast concrete basin and, in lieu of a glass door, the oak flooring is inlaid with a splash pad of Spanish tile. Photo by Sean McBride. 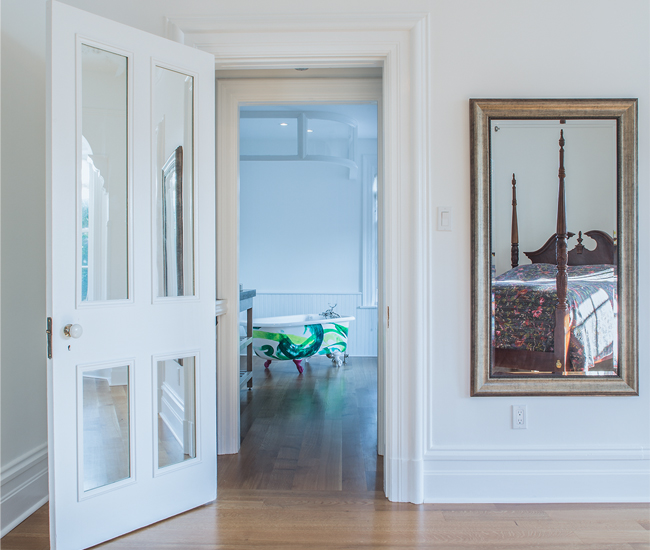 Sharing this space is a vintage soaker hand-painted by artist Nick Sweetman. Photo by Sean McBride. 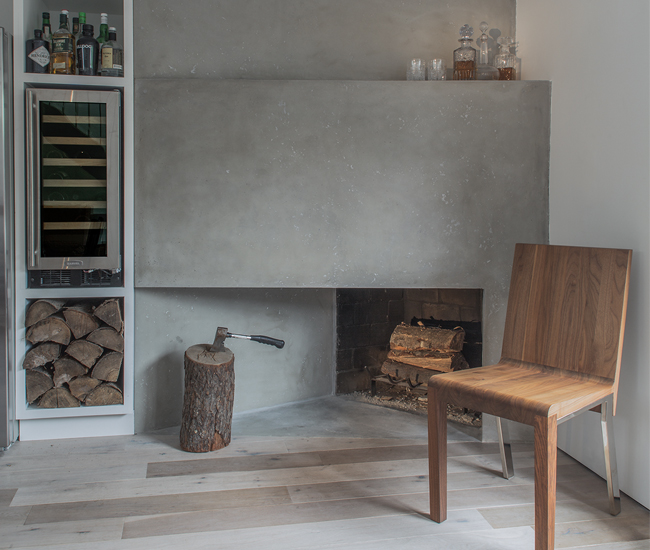 Its Summerhill project came with an interesting challenge: what to do with a 1970s chamfer corner fireplace? The new floor-to-ceiling design was fashioned from engineered cementitious concrete. Photo by Sean McBride.
Share Tweet Pin Email Print

By Elizabeth Pagliacolo
Photography by Sean McBride and Naomi Finlay

When we first featured Stacklab in Fall 2012, Jeff Forrest’s fledgling design and fabrication studio was gaining traction for its refined take on salvaged wood furniture. But like many design upstarts, it was surviving on passion. By day, Forrest worked as a project manager on construction gigs with his now business partner, Robert Koblinsky. Through the night, he sketched furniture.

If the studio has an aesthetic, it’s both heirloom and otherworldly, and when it veers into ornamentation, the result is a reflection of process. Take the oval-cut table made from an ancient slab of redwood burl, the voids filled with resin. Its super-resolute, painterly top was achieved in a temperature- and dust-controlled environment. For a series of stools, the team CNC-milled the diseased-ash base, and then packed a mixture of sawdust and plaster around it to create a mould for the seat. Made of melted beer cans, its under-side looks antiquated. Both projects were tackled in Stacklab’s own west-end fabrication facilities.

Out-there lighting, furniture and products by other designers supplement Stacklab’s work, and feed its hunger for experimenting with process and materials. They collaborate with LMBRJK, whose techno-organic wood stools they also sell, as well as Partisans, whose LED light fixtures in undulating heat-formed acrylic are on view at the studio-showroom. And these are just two alliances: the studio works with partner foundries and shops throughout the GTA.

Forrest’s latest fascination is “elastic concrete,” a super-thin skin of fibre-reinforced cementitious composite around a foam core. That material now wraps the fireplace surrounds in Stacklab’s first two house renos, both of them commissions that grew out of “baby projects.” “People came back to us and said, ‘We loved what you did for our dining room, let’s see what you can do for our house,’” says Forrest. “That’s how it began.”

For the first one, a 750-square-metre Quaker-style home on Lake Ontario, Stacklab took on the trifecta of designing, preserving and expanding. It coalesced its broad range of expertise, consulted with an engineer and an architect, brought in a fixed-price contractor and conducted biweekly meetings.

The team tore down load-bearing walls and installed steel beams and a moment-resisting frame on the south end of the house. It built an extension on the east side, and sculpted a pitched-ceiling bedroom from a derelict attic. Bricked-up back facades gave way for massive, steel-framed infill windows, and inside Stacklab inserted its signature moves. In the now open-concept kitchen and living area, Spanish mosaic tiles are inset into new oak flooring; the kitchen island is oxidized beech; millwork is finished with aged-looking custom-cast iron pulls; and a seven-seater sofa is linked by butterfly joints.

If Lake House with its many ornaments is “all dessert, all the time,” Stacklab’s minimalist house in Summerhill tests the studio’s experimental capabilities with a small space and strict budget; a blank canvas punctuated with dashes of wow factor. Into the all-white Ikea kitchen, the studio inserted a “band of articulated colour” by way of a patinated copper backsplash. And in the living room the team encased a 1970s chamfer fireplace in elastic concrete, transforming it into a sculptural showpiece. Now at work on its third residence, with the additional role of construction project manager, Stacklab truly provides the full treatment. As Forrest says: “And we’ll give it to you on time, with a big red bow on it.”

Originally published in our Winter 2015 issue as Against the Grain.