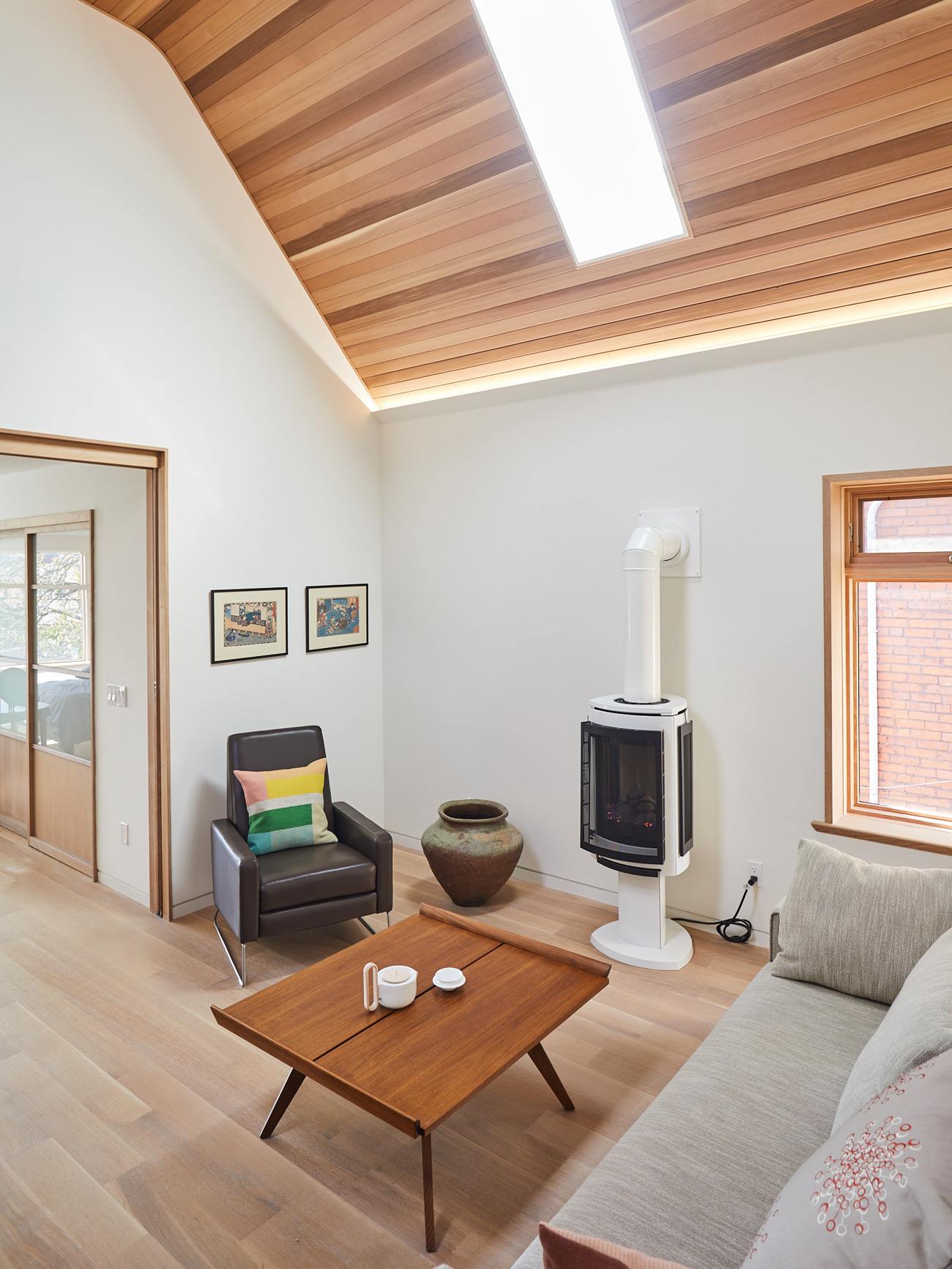 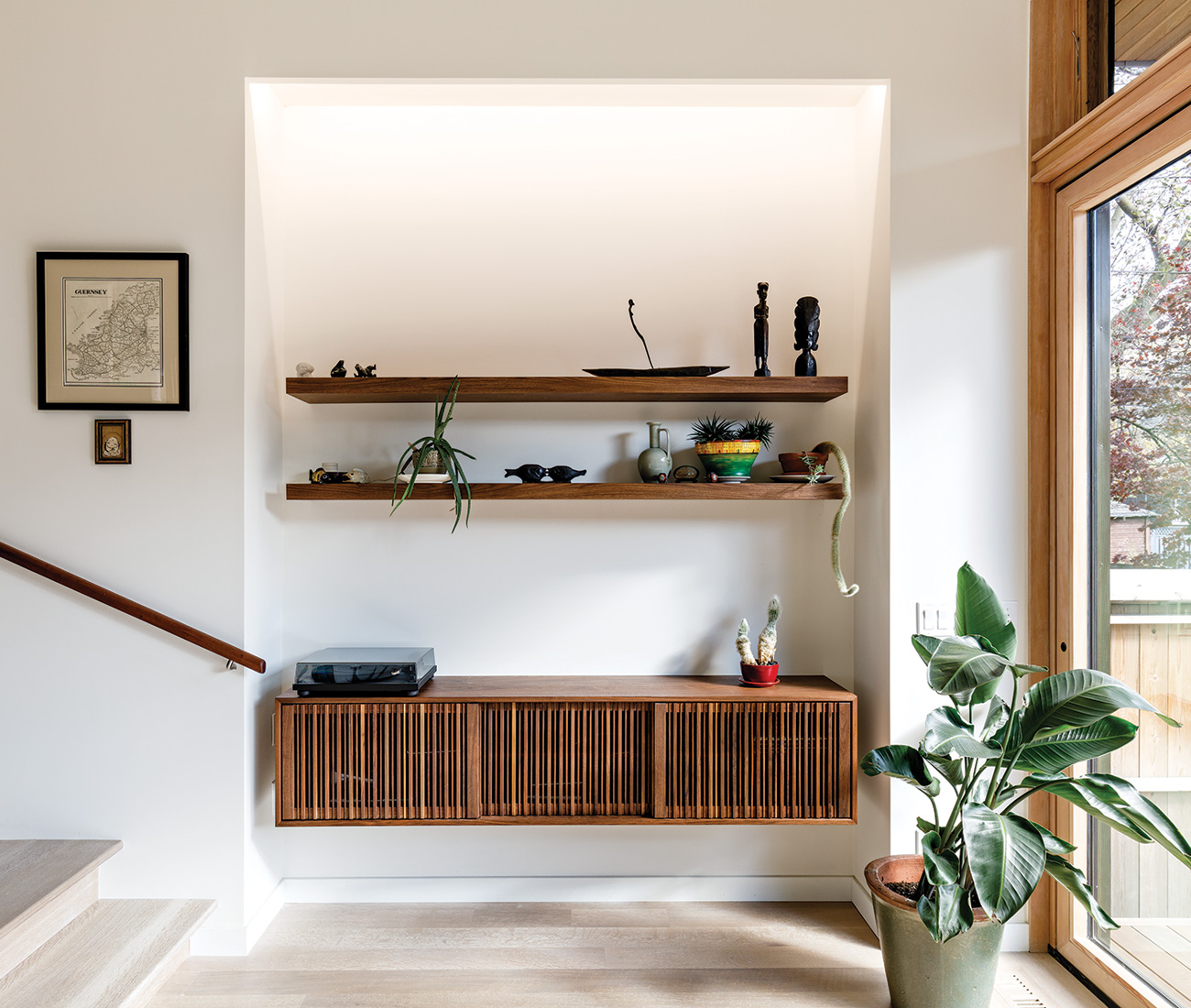 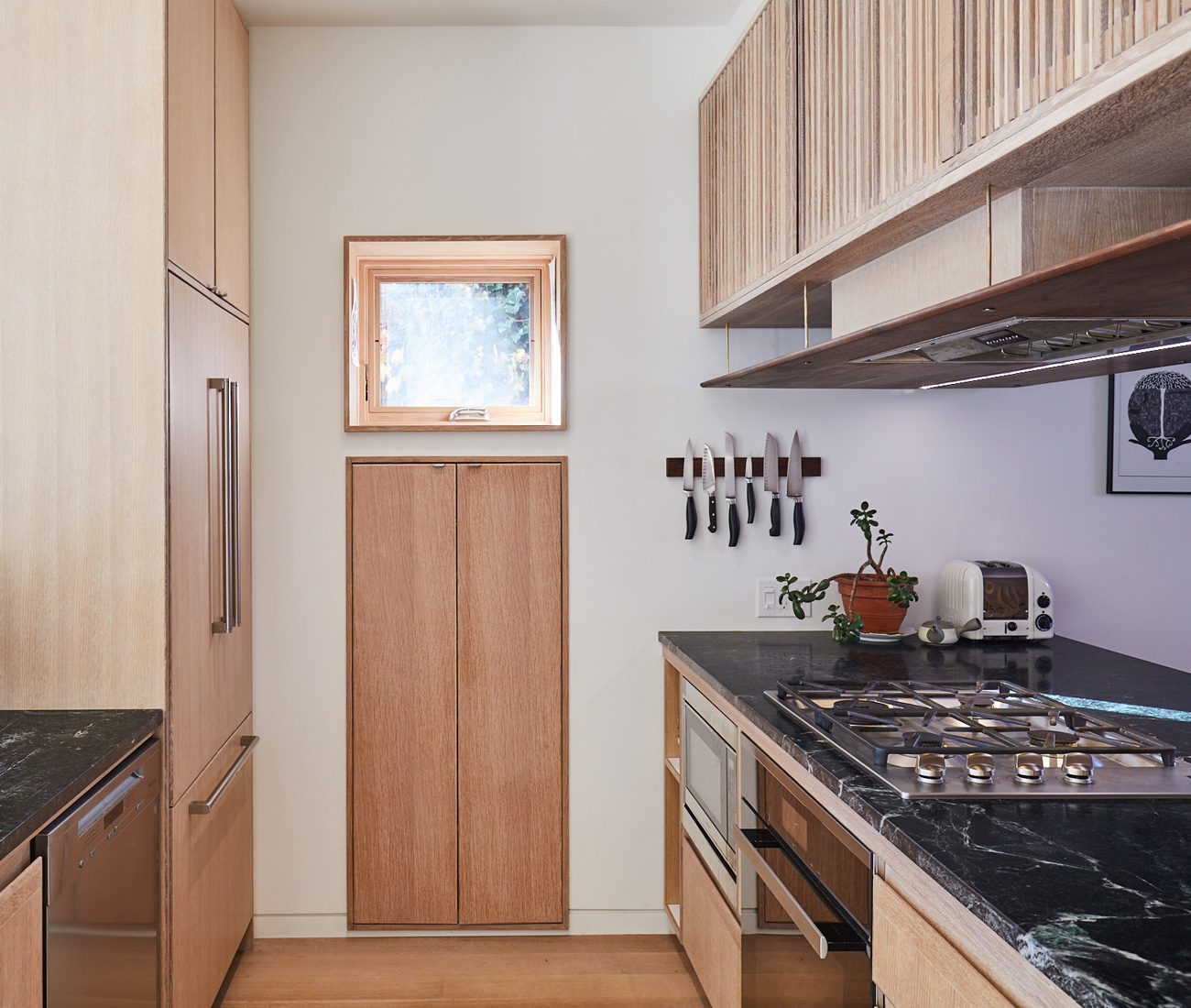 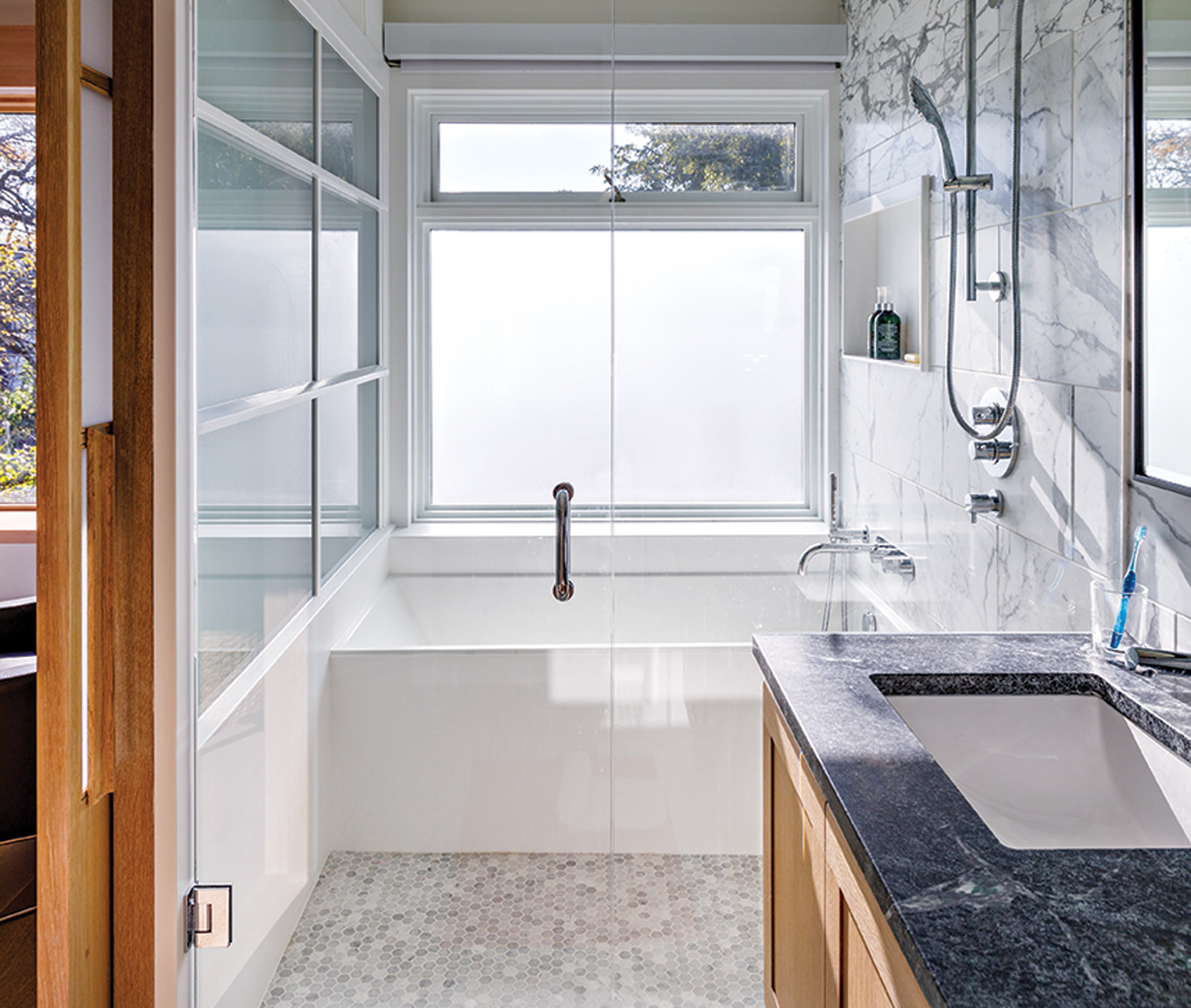 Soapstone, Corian and marble fuse in the soft palette of the master bath. 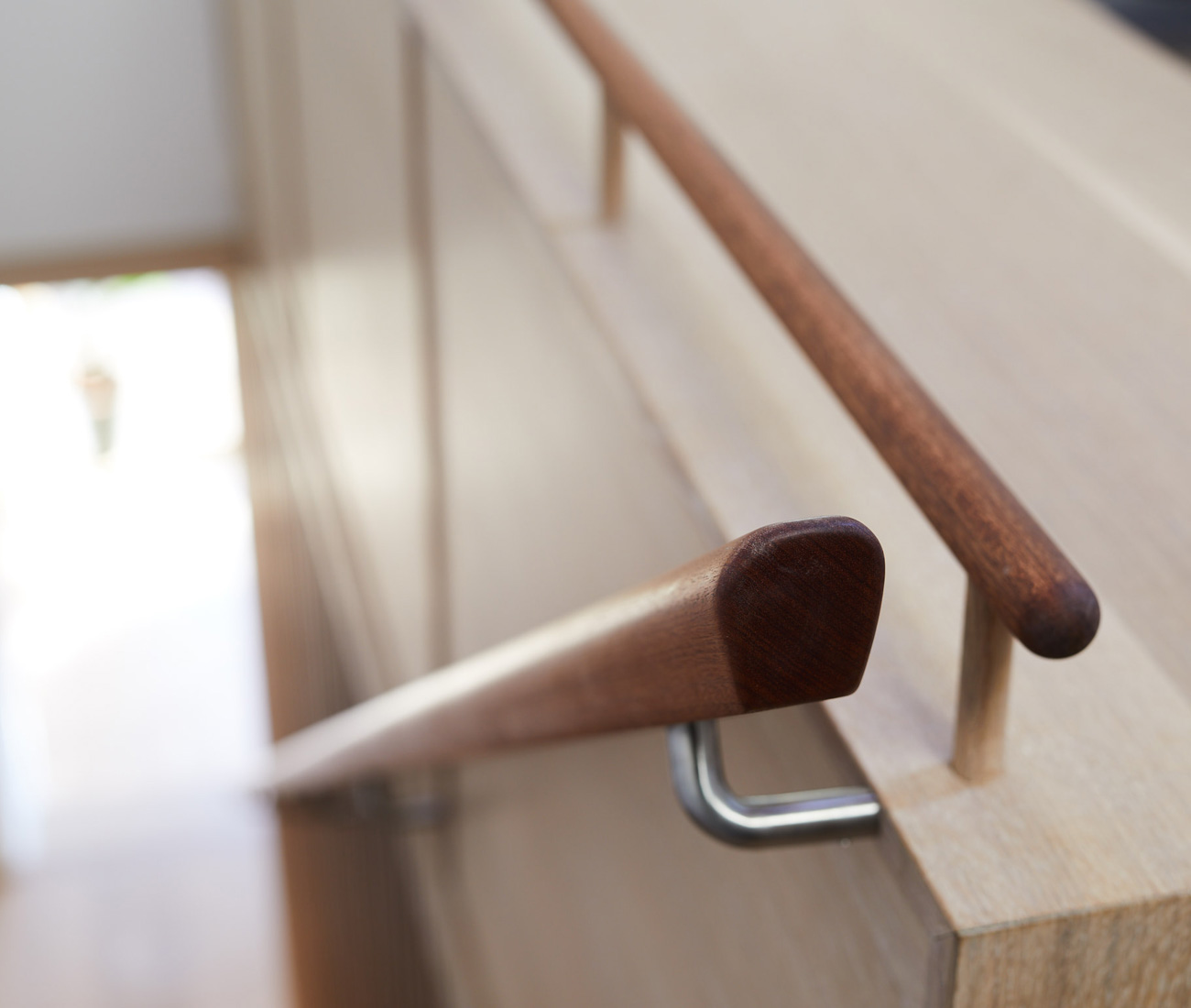 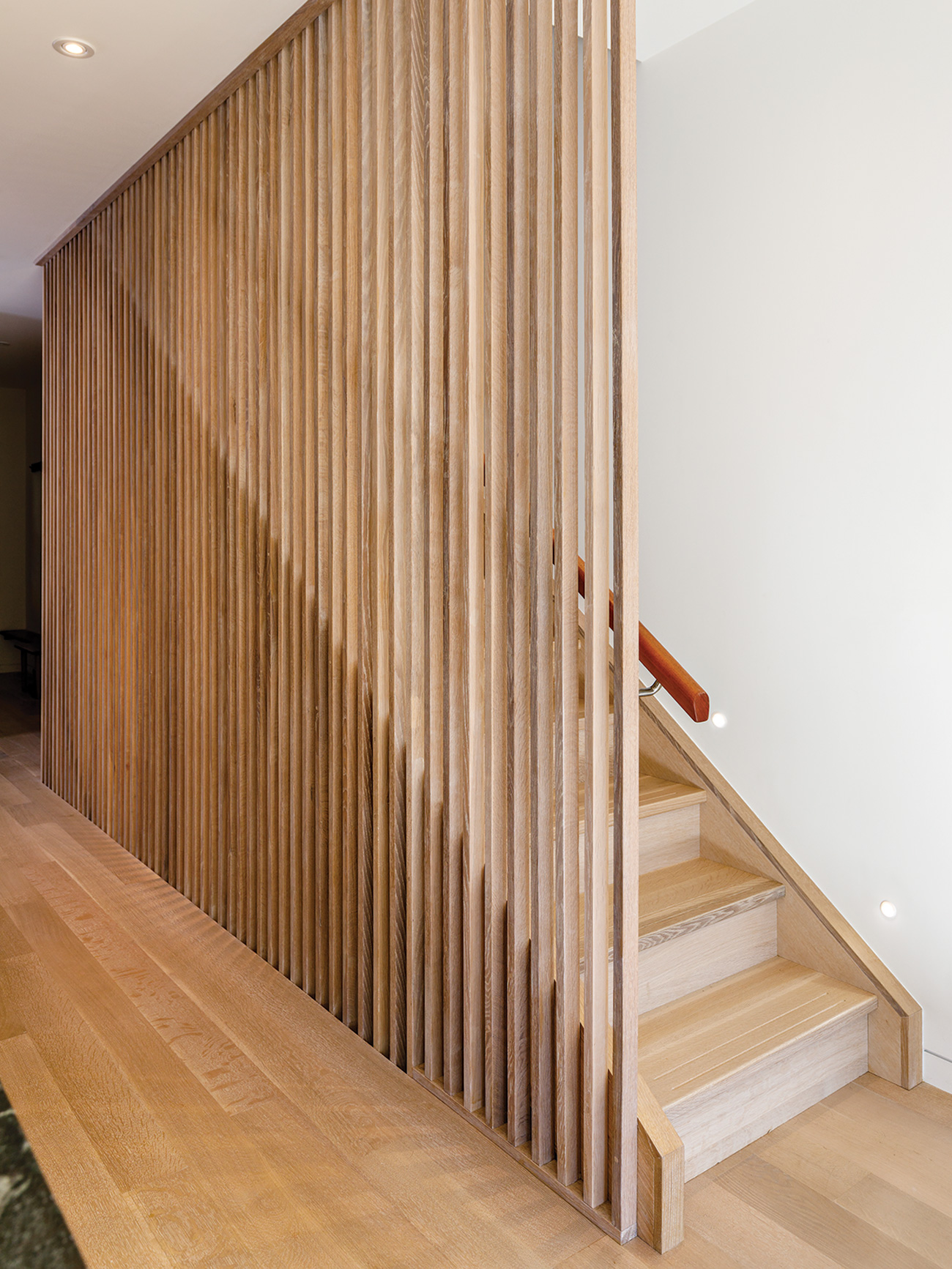 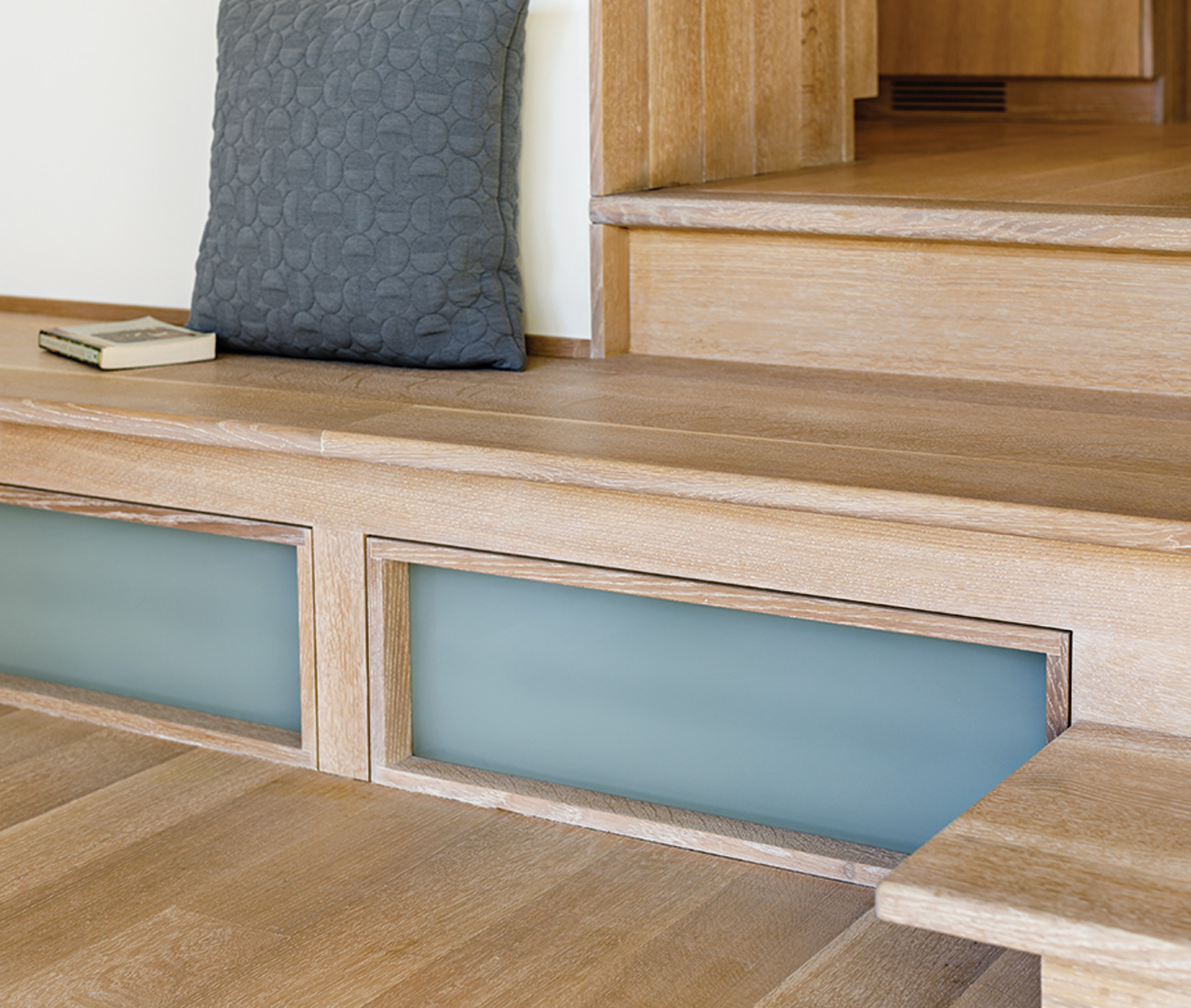 Founding architects Peter Tan and Christine Ho Ping Kong are known for their warm, modern and subtly surprising spaces, often with a Japanese influence, and always articulated with perfect millwork. They operate their own workshop in the city, handmaking cabinetry and furniture for their most detail-rich projects.

One such project is a recent redo on a quiet Junction street. Two busy professionals – an English professor and a financier – wanted to update and expand the century-old bay-and-gable where they had lived for 12 cramped years by creating a comfortable place of contemplation and respite from their travel-filled lives. Tan and Ho Ping Kong preserved the place’s history, added on at the back and breathed new life throughout.

From the street – apart from the razor straight ipe-wood slats on the porch – the place looks as quaint as when it was built. Seen from inside, the revisions appear gradually, creating a sense of revelation: a formal front hall layout gives way to a dining room, kitchen and living room that flow together as one, even though they are on multiple levels. 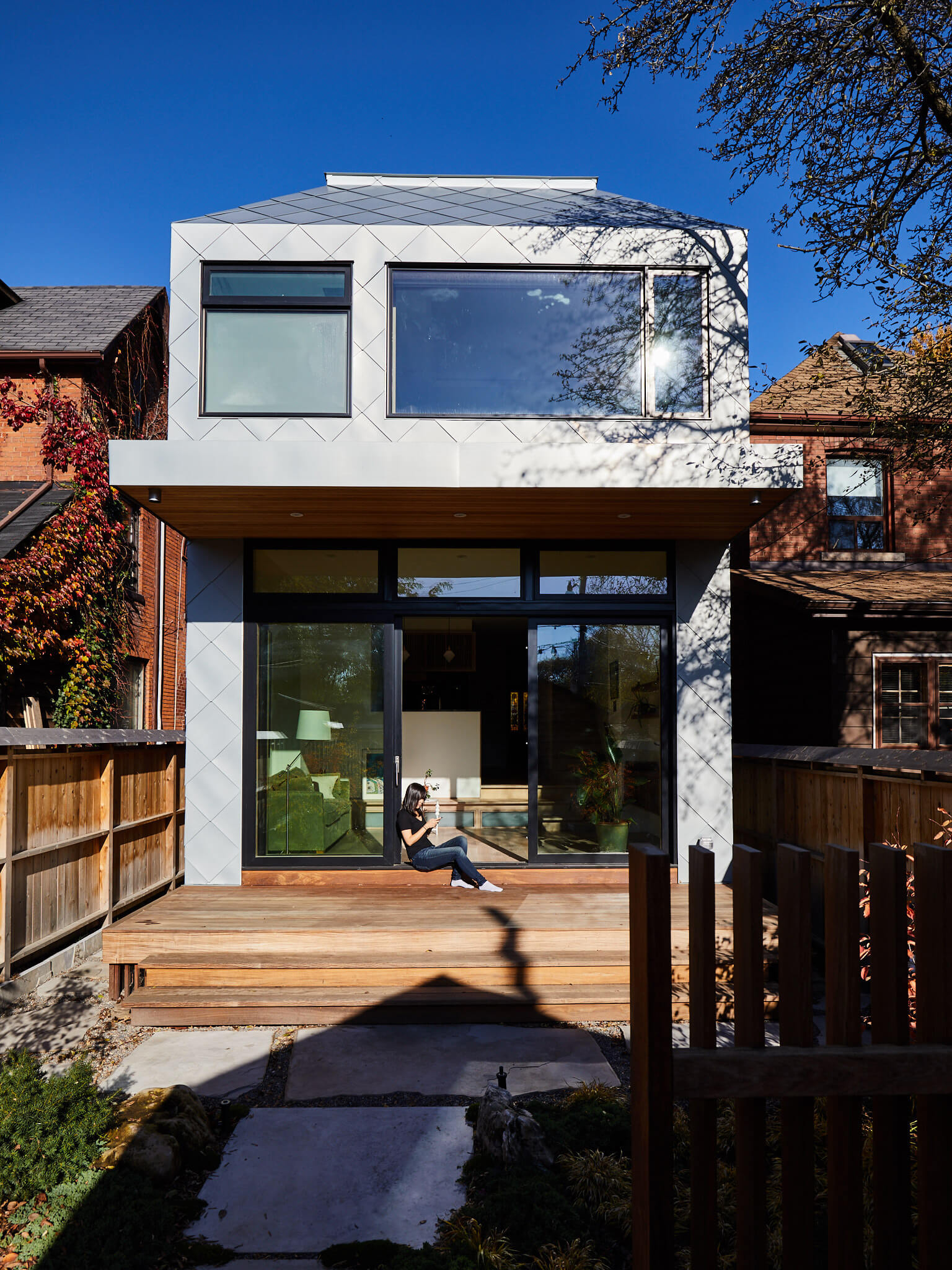 To connect the back garden to the main level (originally built a metre above grade), the kitchen cascades down into the family room with long, wide steps that double as art displays and extra seating for guests. (With Studio Junction, no opportunity is wasted: the bottom riser of the stairs is punched with milky-white clerestory windows that bring light into a basement bathroom.) Beyond the living room, massive sliding doors, a single step down to a new deck, and then a final set of bench-wide steps lead into the Zen-like garden.

Throughout, the use of wood is poetic. The kitchen, for example, is detailed with a delicate suspended storage system, which ingeniously conceals the range hood within a bank of slat-covered cabinets, and stores pots and pans on a thin plane of walnut dangling by spindly brass posts. “It’s taken us years to develop the language of the wood,” says Studio Junction’s Ho Ping Kong. “It’s very important to us.”

The language is particularly lyrical in the refreshingly contemporary upper level. Up a slat-sided set of white oak stairs, a vaulted common room opens up, resembling a Japanese cabin in the woods, replete with a wood-burning stove and a cedar-lined ceiling. A place for reading or quiet coffees, it’s the pre-unwinding area for the two ultra-restful bedrooms nearby.

The guest bedroom, on one side, has a Douglas fir window bench for whiling away the hours; above, accessed via a secret set of stairs, is a secluded reading nook in the former attic. The master bedroom, on the other side of the storey, is both calming and dramatic. It’s crowned in an angular folding ceiling that’s illuminated with LEDs to create a celestial glow, and lined with a wall of shoji-like screens that conceal a marble-swathed ensuite, a walk-in closet and a dressing area to get ready for – or recover from – the day.

The master bedroom is set within the new back addition, a prismatic volume clad in a weave of zinc. “Pressed zinc was very common for a long time,” says Tan, noting the popularity of old-fashioned pressed-metal ceilings. “We’re bringing it back here in a new way.”

Originally published in our Spring 2018 issue as “As Wood as It Gets”. 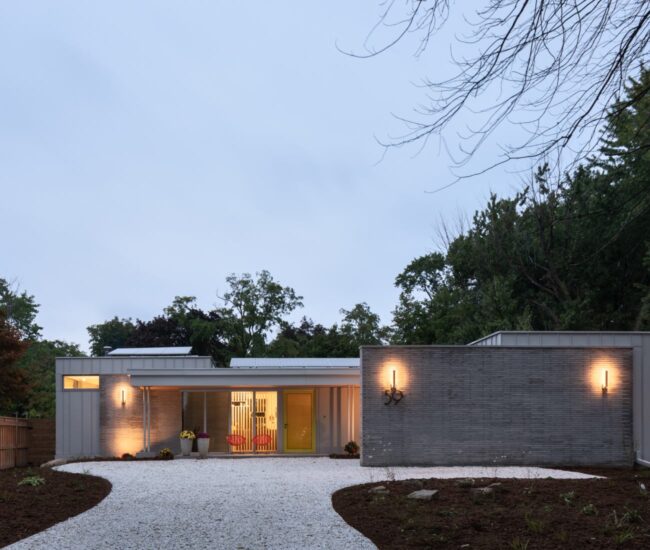