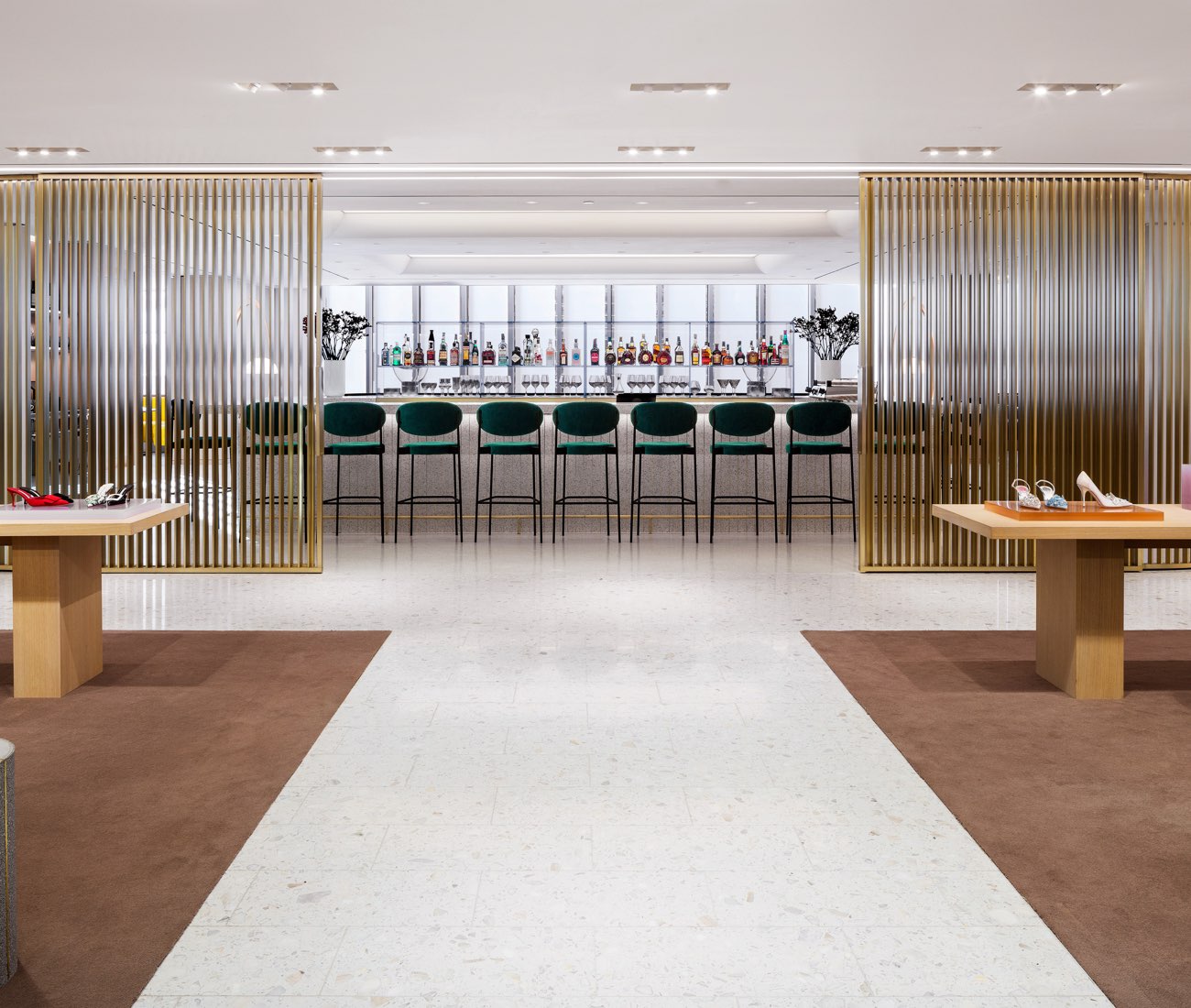 With a colour palette that echoes designer shoes, Holt Renfrew’s culinary offshoot shows it does hospitality as well as haute couture

Few Toronto addresses have the cachet of 50 Bloor Street West. Situated in the city’s most upscale shopping district, Holt Renfrew‘s flagship store sits at the heart of the Canadian high fashion world. As it happens, the iconic department store is no slouch in the hospitality department, either – or for that matter, interior design. Consider the new Holts Café.

Unveiled in late January, the reimagined Holts Café is a plush addition to the storied brand. Designed by London-based hospitality specialist Alex Cochrane, the second-storey cafe unfolds as a series of distinct rooms, including a marquee dining room and bar, an intimate lounge and a private dining suite. It’s anchored by elegantly subdued tones and punctuated by vivid bursts of primary colour; the interplay of muted and brilliant tones is complemented by a similar contrast of sleek and textured surfaces to create a distinct sense of place within the larger store. 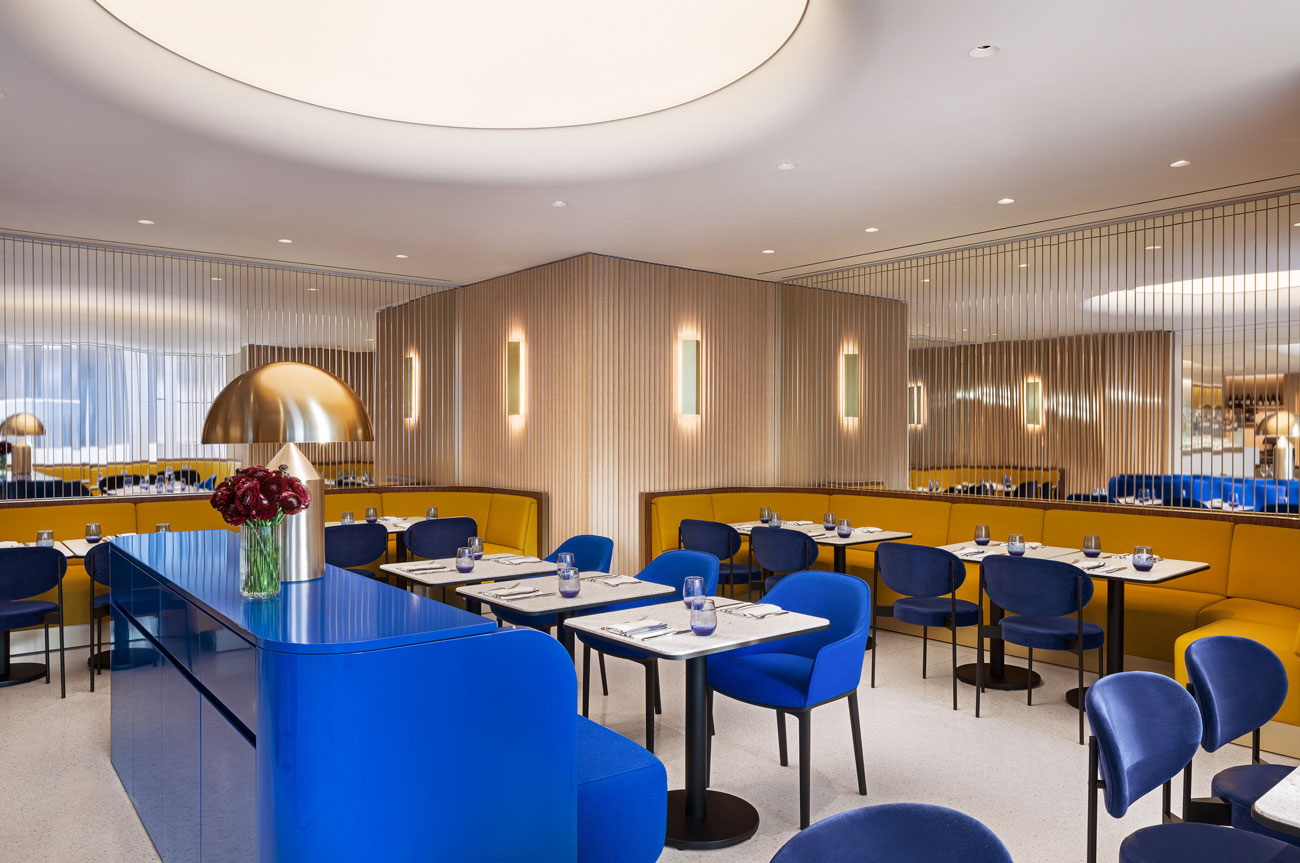 “A lot of time was spent on both the material and colour palette,” says Cochrane. “We wished for a fine balance of primary colours that would contrast against each other but at the same time be complimentary – which can be tough to achieve as we did not want it to be too ‘playschool’ in look either.”

According to Cochrane, care was also taken to integrate the café within the visual identity of the recently renovated department store. “The palette of materials and colours of the footwear department were strong factors when deciding the Café’s own materials and colours. We just added saturation,” says Cochrane. “We wanted the colours within the Café to surprise and invigorate the visitor.” 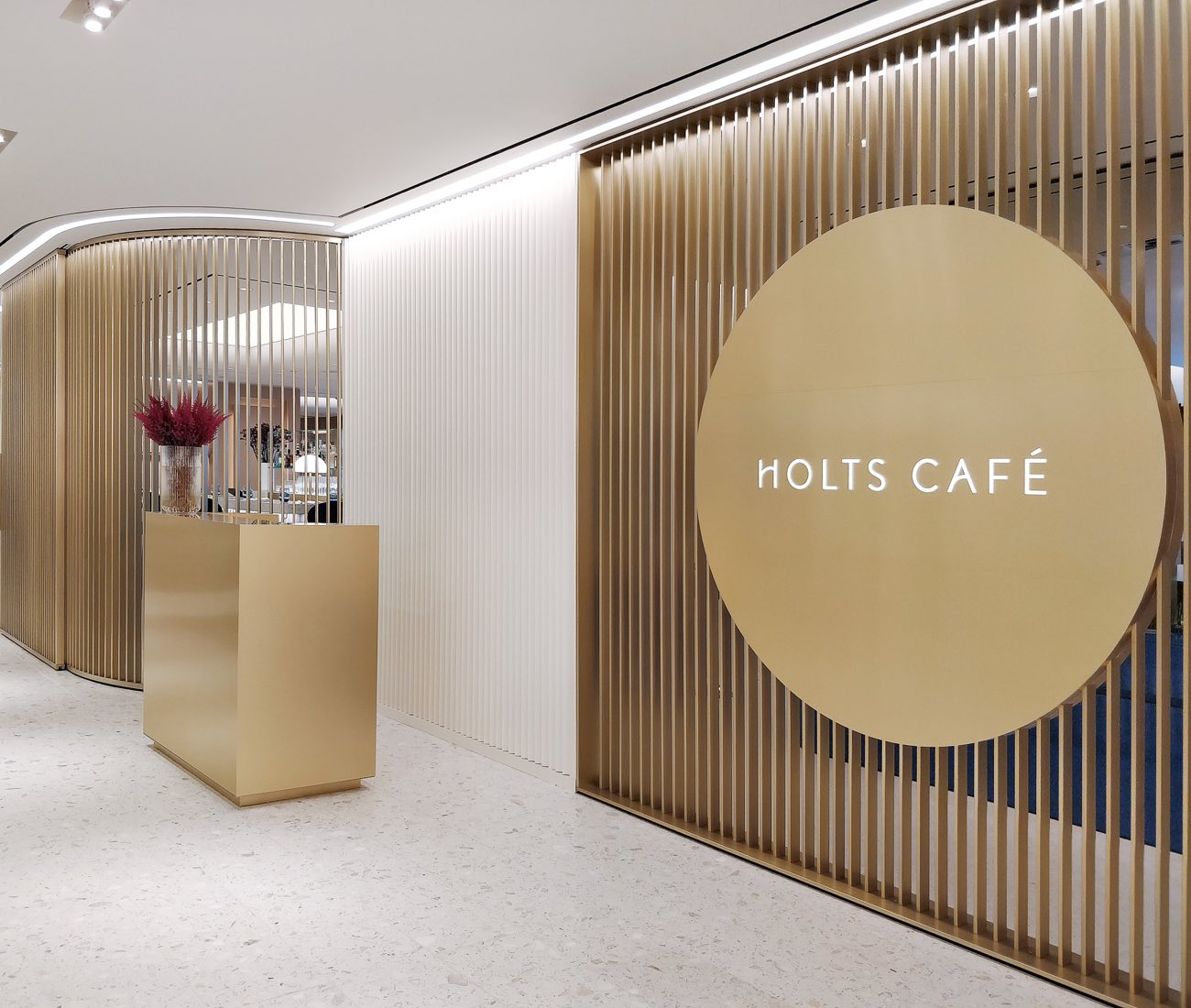 In the elevator lobby, the café’s identity is introduced through a quietly opulent interplay of wallcoverings. Discretely textured grey and pink tones are a counterpoint to the dazzling blue that frames the elevator. The terrazzo reception desk adds another note of texture alongside the sleek gold Holts Café lettering that announces the restaurant. 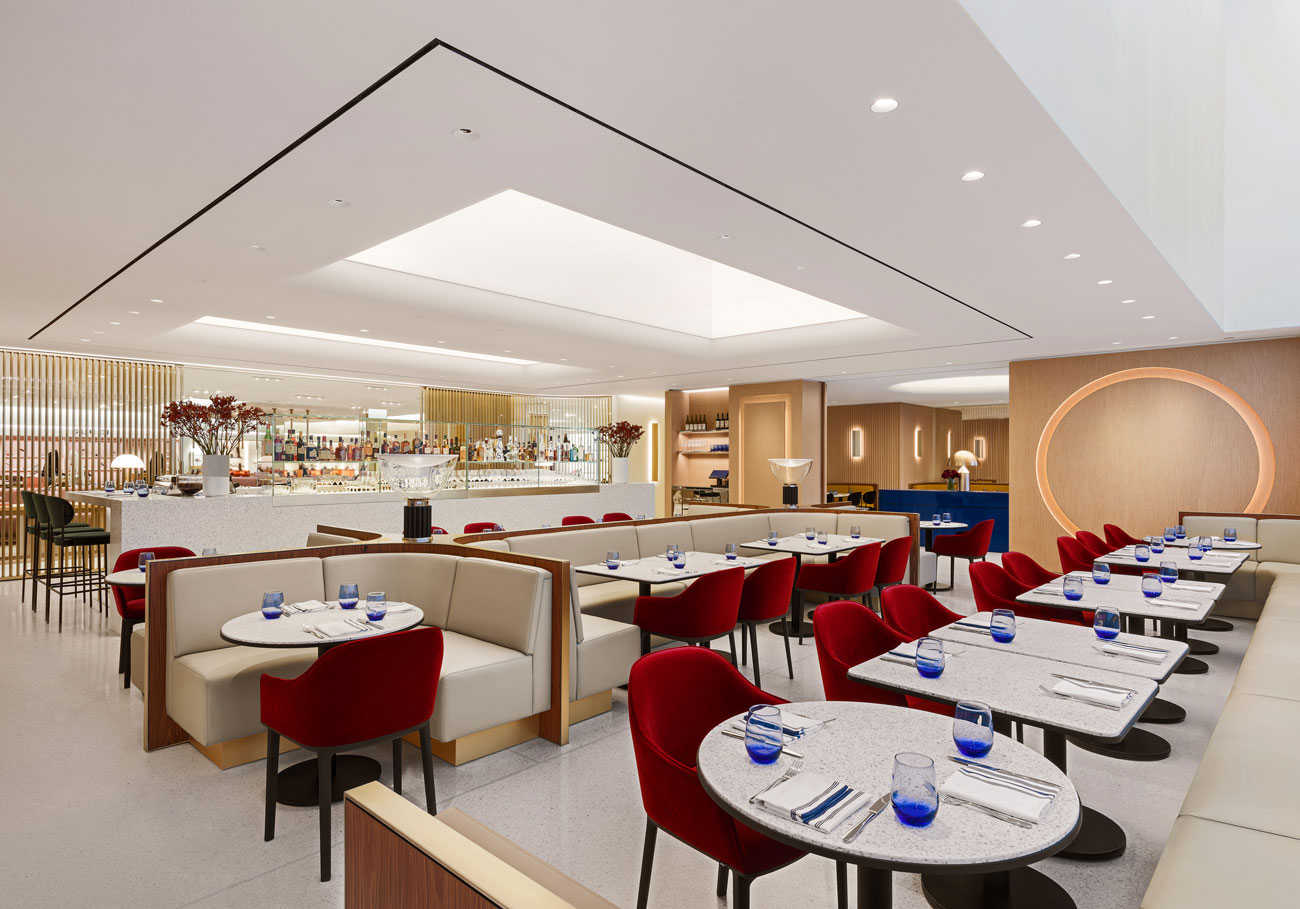 In the main dining room, a palette of natural tones – including stone tabletops, wood banquettes and a terrazzo floor – is punctuated by luxuriously textured red chairs. Around the corner, a smaller dining nook swaps out red for blue, the soft seating paired with a glossy counter in the same tone. The dining room’s trio of primary colours is also subtly rounded out by a frame of mustard-yellow booth seating. 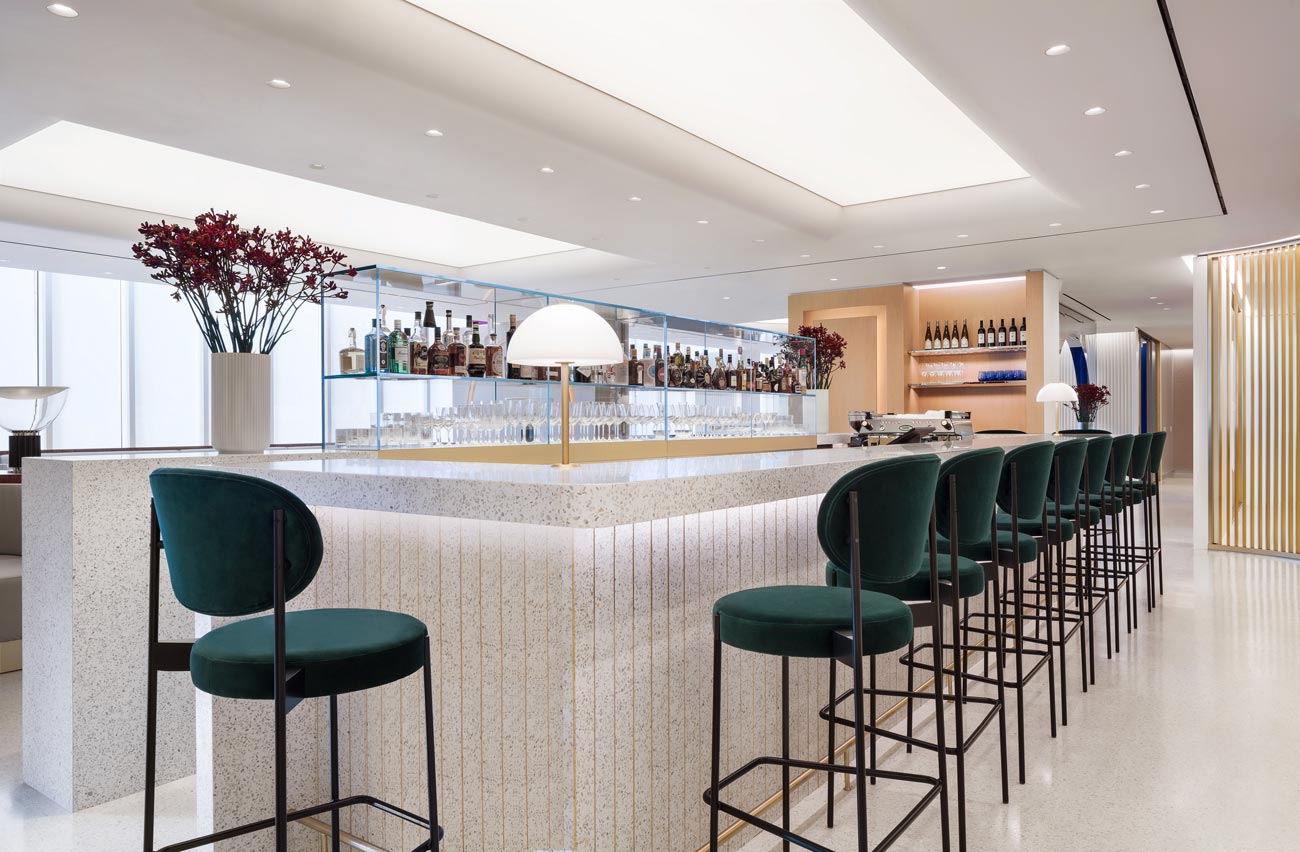 And when yellow and blue are combined? Green. There’s touches of it at the bar, which is lined on both sides by elevated green-fabric chairs. Although the bar is slightly removed from the floor-to-ceiling windows that line the café – installed as part of Gensler’s larger renovation of the store itself – the space feels full of light. 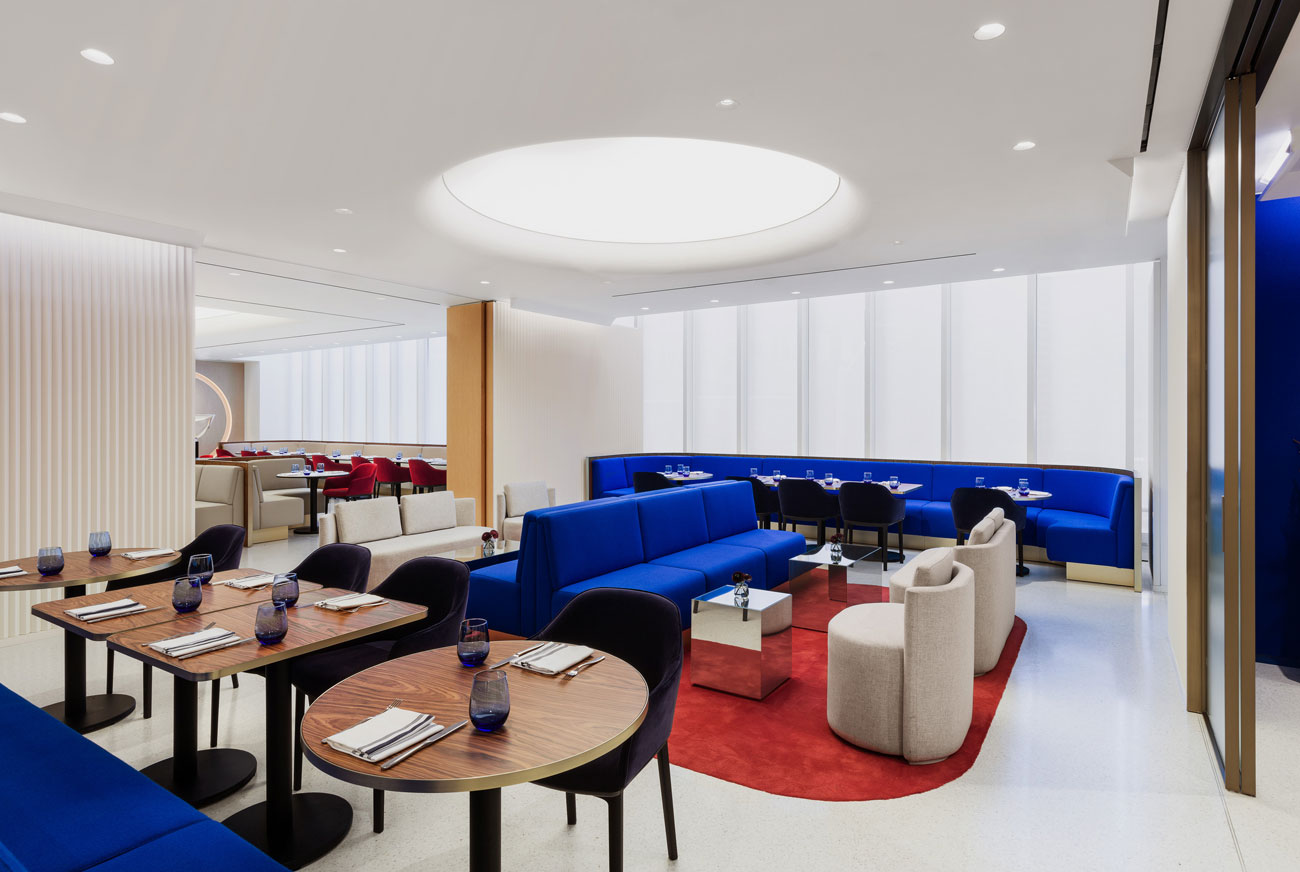 Meanwhile, the more informal lounge combines a bold red accent rug with blue seating to foster a more playful atmosphere. Situated alongside the windows, the room’s access to abundant natural light makes it feel even more relaxed and comfortable. 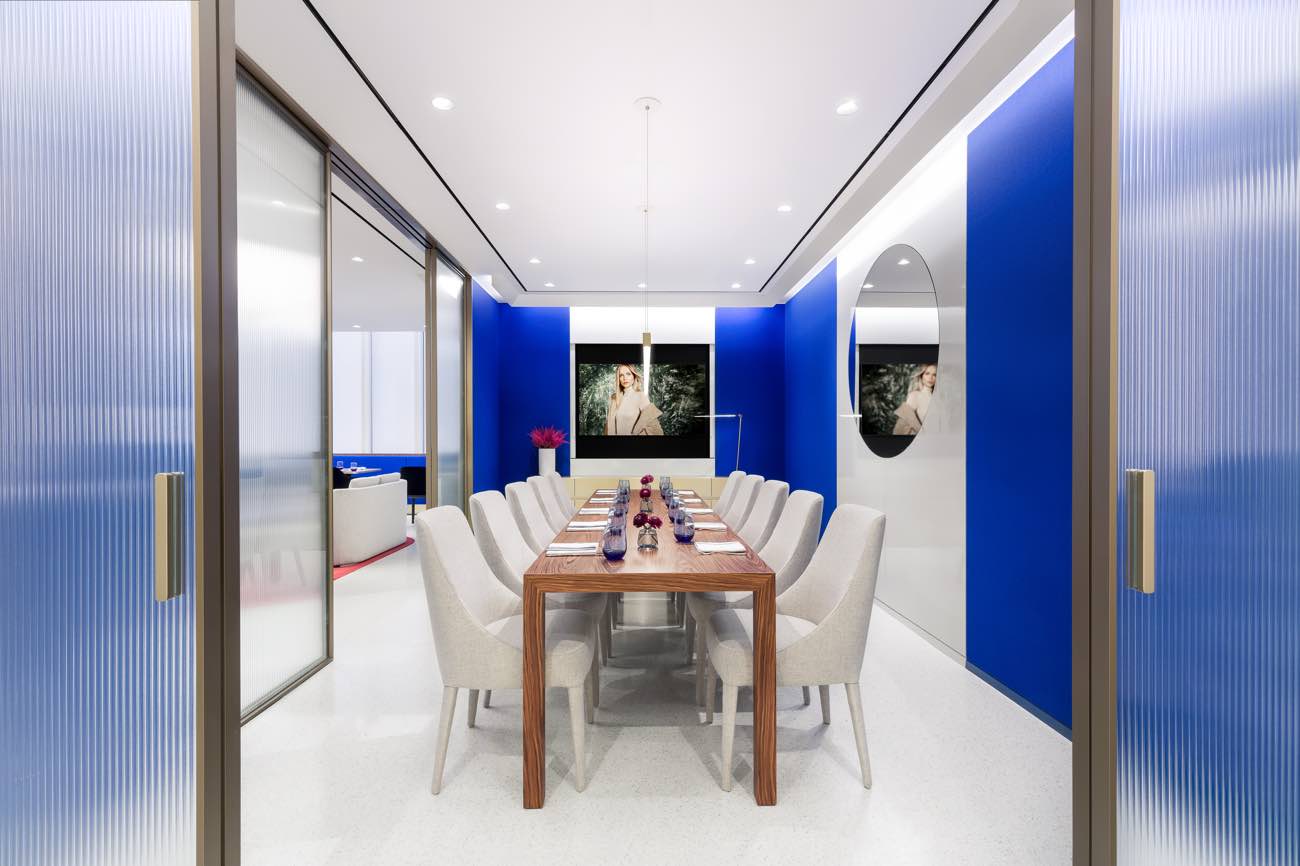 The private dining suite is another study in blue. Solid blue walls create a visual link to the larger dining room next door, with the smooth blue monochrome contrasted with the wood grain of the 10-person table at the heart of the space. Here, translucent sliding doors bring indirect light to an enclosed room.

In fact, natural light was a starting point for the design. “We knew that Holt Renfrew was going to remodel the façade and we saw this as an opportunity to propose a window design and open up the façade to allow as much daylight to flood into the café,” says the designer. But even long after the sun goes down, a sumptuous yet energetic ambiance lingers. 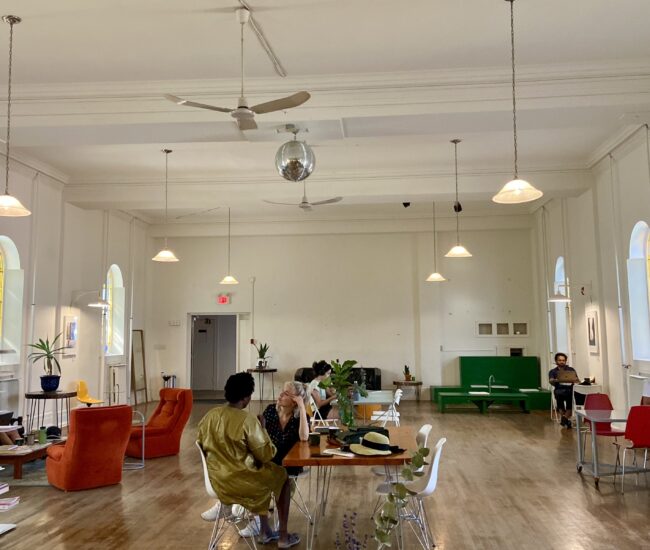