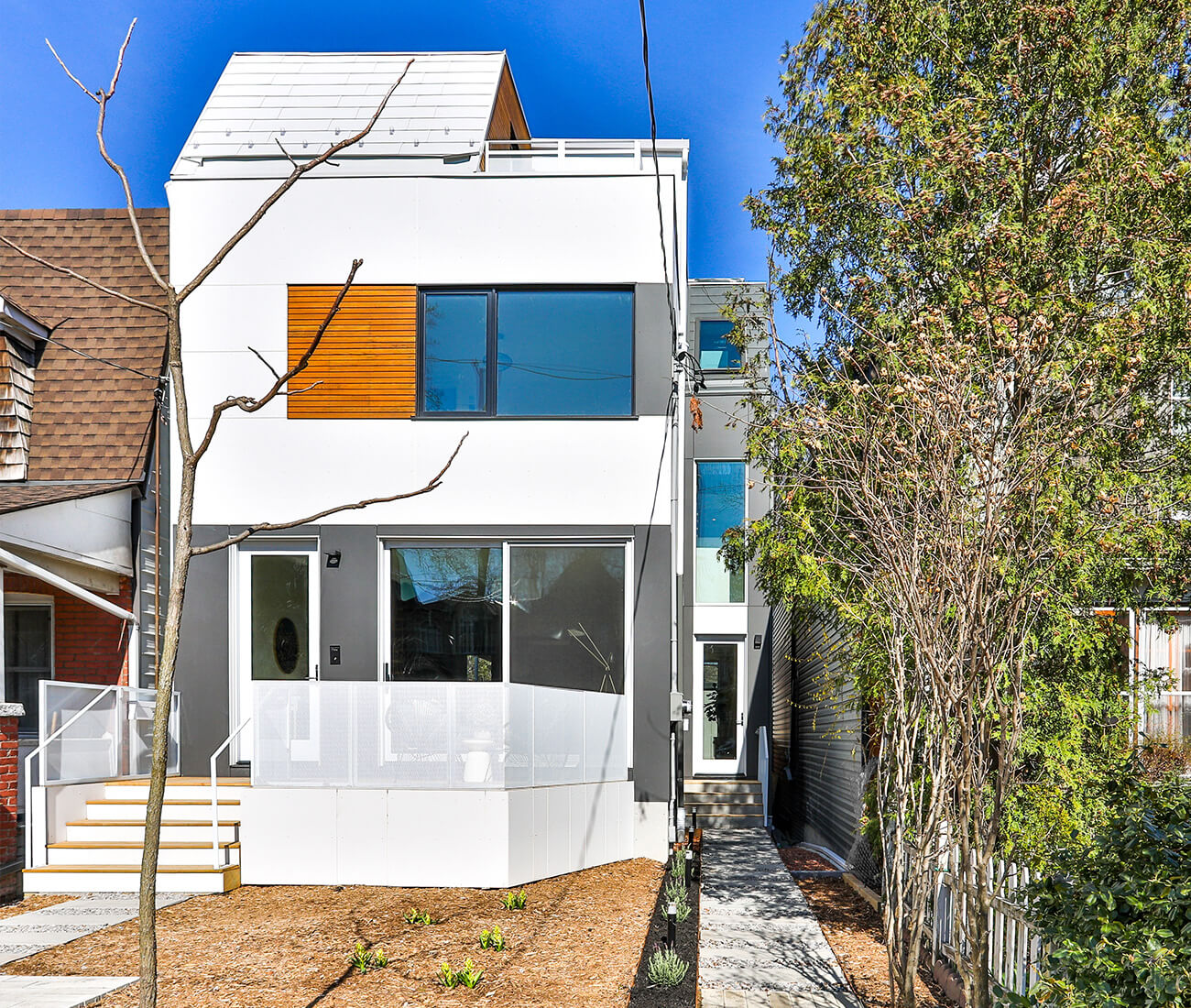 The floorplans show the generous layouts and where the two houses intertwine, thanks to the meandering common wall. 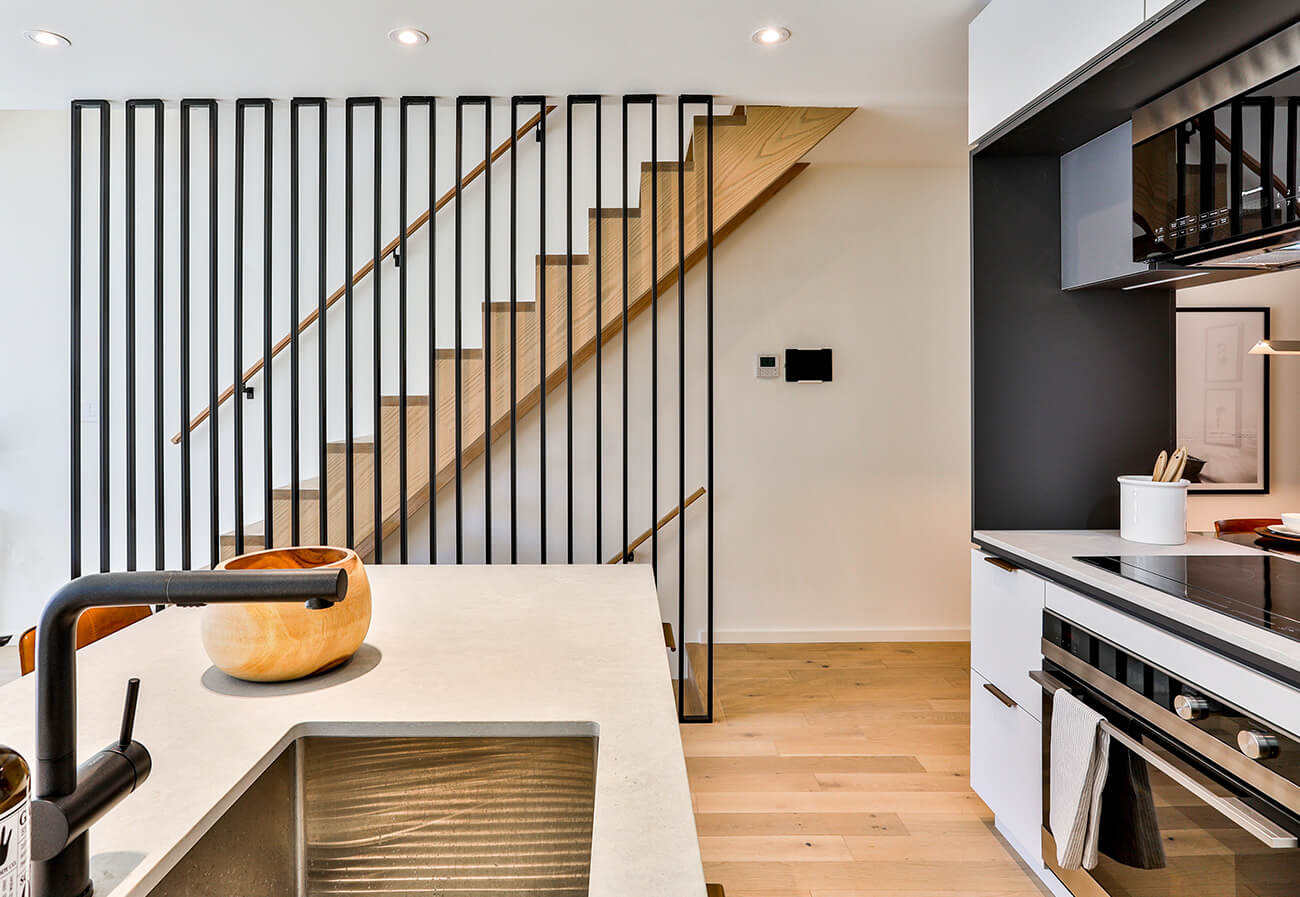 The railing, by Stainless Dimensions not only delineates the stairs from the kitchen but enhances the ceiling height. 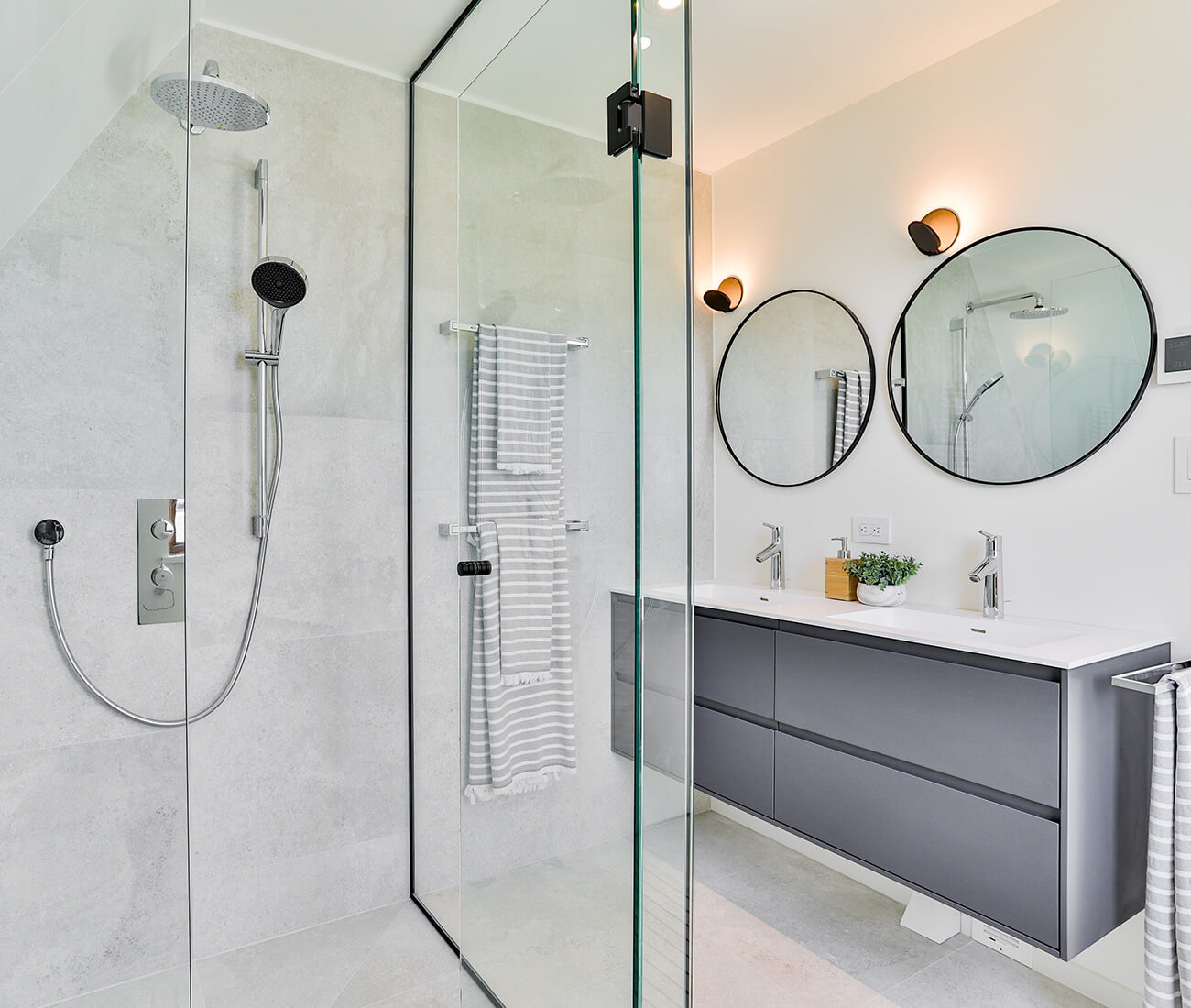 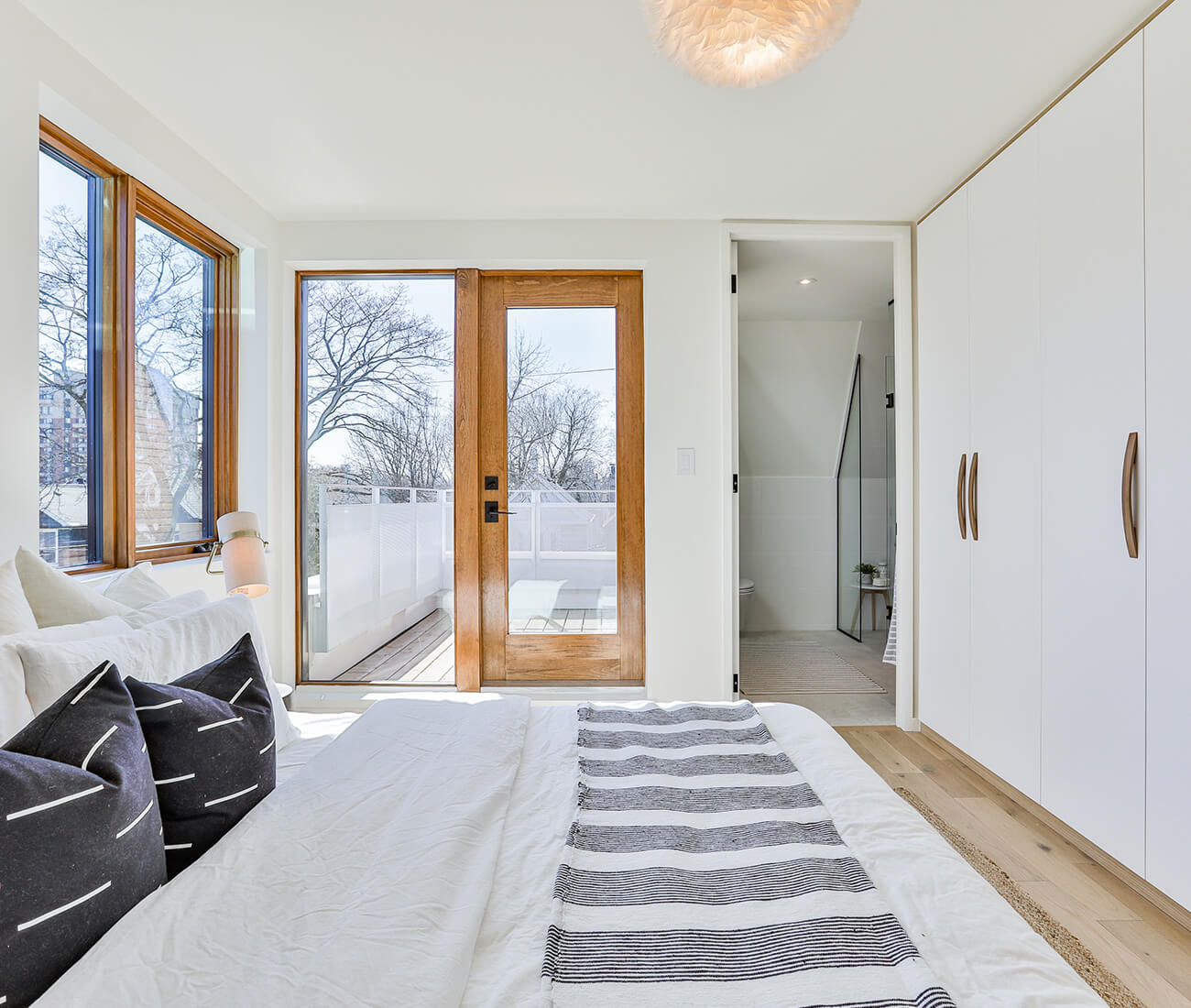 Up top, the master bedroom steps out to a rooftop deck; providing the perfect bird's eye view of the neighbourhood.
Share Tweet Pin Email Print

A trip to the dump inspired a local architecture firm to build green, gorgeously, and go on to earn a Platinum Plaques certification from Built Green Canada

He laughs about it now but when Felix Leicher first moved to Toronto from Munich, he had quite a shock. The young architect was taking a load of garbage to a dump and found that everything was piled in one heap. “In Germany, we sort every little piece,” he says. “There might be 20 different containers and they watch you separate everything.” As he, the founding principal of baukultur/ca, went on to renovate homes, beginning in 2015, he became more aware that a lot of things – densification, design and sustainability – are not considered in standard building. He set out to do better.

In 2017, Leicher bought a property in Greektown with a twofold goal: improve living conditions on the site with a pair of semi-detached infills backing onto each other – a rarity when side-by-side is the norm – and gently intensify the neighbourhood. The design process took all of three months but the permitting and planning took roughly a year because not only was this a new build but the unconventional design meant densification. “We were basically pioneers,” Leicher says, “There is maybe a handful of semis built this way because people continue to think inside the old bylaw.”

To provide that front and back access, the houses – only 7.62 metres wide – entwine instead of butting up to one another. Achieving this meant crafting a common wall that meanders in and out, cinching and expanding zones in one to accommodate the other, and vice versa. With three bedrooms, outdoor access and flow maximized across all four levels in each home, there is more than enough room for two families to live comfortably. Sustainability comes with a fee; luckily though it’s a onetime cost with local benefits and savings down the road.

To reduce construction time and debris, as well as the impact on the neighbourhood, the duplex’s components were built off-site and assembled on the lot in just five days. Doing it this way costs more ­– there’s the use of a warehouse, the crane to hoist the panels, and transportation fees – but the time and material savings are significant: with a standard build, which can take up to three months, inaccuracies are inevitable and materials are subject to the elements, resulting in excess waste and compromised quality.

Once the house was built, the real value was added with made-to-last, low-maintenance materials, 80 per cent of which are Canadian, and most of which is hidden from view. For instance, the lumber is FSC certified, which is highly durable and economically viable, and the entire building is wrapped in a thick layer of insulation, most of it outside the framing, which keeps the structural elements at a constant temperature and safe from the elements. The windows are triple pane glass, which is twice as energy efficient as regular glass, and the wall assembly includes a vented rain screen which has a drying cavity on the exterior to prevent mold. A white roof membrane reflects the sun, preventing the home from becoming a heat island, while an energy recovery system creates a constant air exchange. “The system exhausts the stale air from the inside and at the same time recoups the energy in the air and cools or warms it before it gets in the house,” says Leicher.

Unsurprisingly the two homes sold fast, for roughly $1.5 million each. No, they’re not cheap, but these are forever homes and there will be 60 per cent energy savings down the road. The project will be the first in Toronto, and only the third in Ontario, to be certified with the Platinum Plaques by Built Green Canada, a third-party certifier that looks at the buildings from a holistic standpoint. A well-deserved gold star, one Leicher does not take lightly. “I always want to do the best possible,” Leicher says, “and this house is the best it can possibly be within the limits that we have. Sustainability is now more doable, with the materials that are available in Canada, and the knowledge which we have, and if the trades are willing to learn, we can do it. So, when someone asks me ‘why do you do that?’ my answer is, ‘why do you not do it?’”