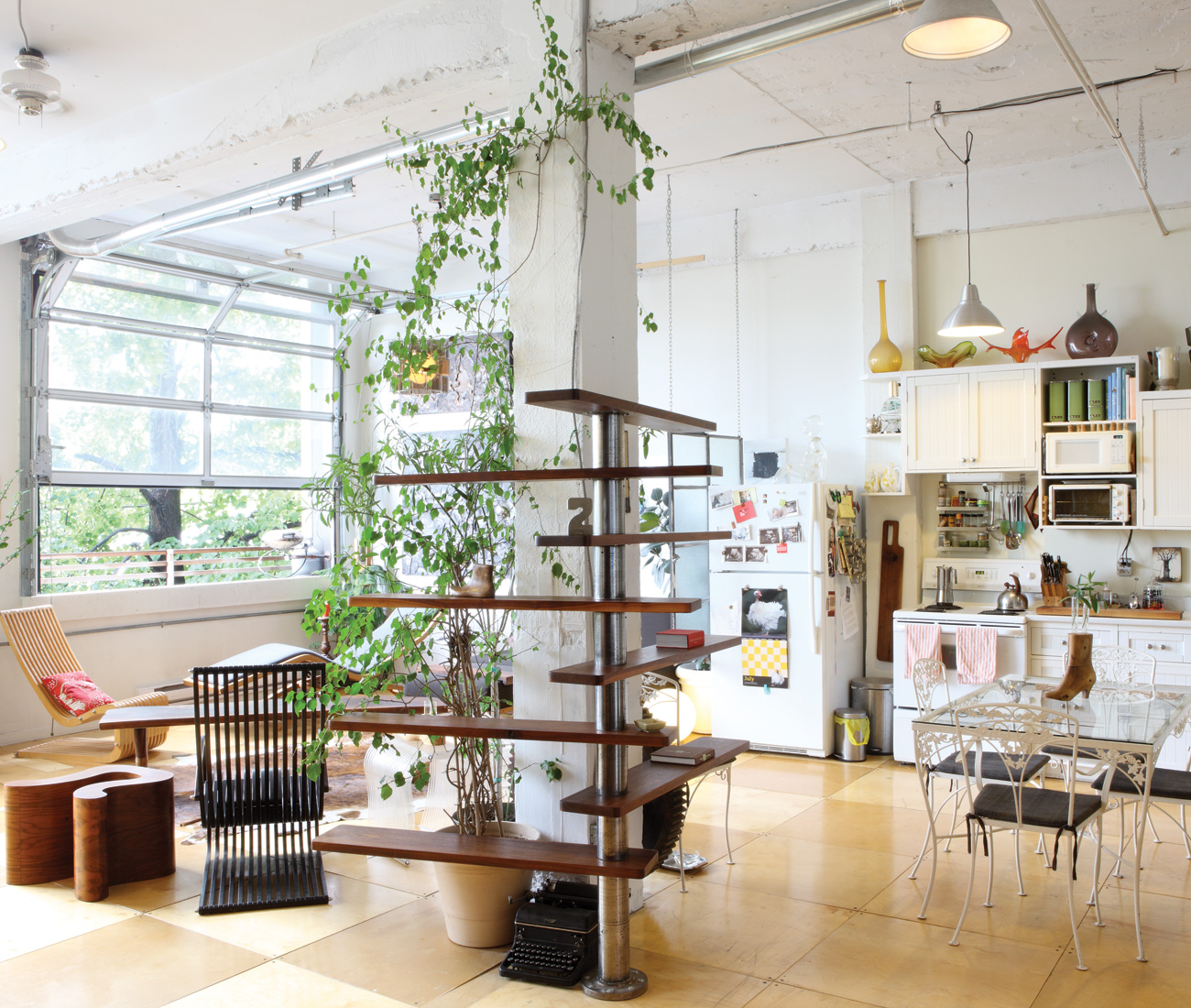 Jason Dressler lives the life he likes to advocate. As one half of the design duo Brothers Dressler, who are known for their zero-waste furniture lines, Jason has infused his own westend loft on Campbell Avenue with sustainability. The building, which also houses an industrial dry cleaner and art gallery Georgia Scherman Projects, is completely unpretentious and effortlessly blends artistic with factory-rough elements.

Dressler and his wife, Tiffany Sifton, found the space three years ago when it was a production studio that was divided into three small rooms with virtually no light. But the high ceilings, exposed concrete walls and bank of eastern-facing windows were exactly what the couple was looking for. “We love open spaces,” says Dressler, who adds, “the door had barely closed behind the landlord before we had the sledgehammers flying.”

After knocking out the walls, they removed one of the windows and installed a rolling garage door left by the former tenants. The retractable window now lends the space a patio-like feel with lush greenery and a large tree blocking out the street below. Most of the indoor plants were salvaged from trash piles left by the landscaping company downstairs, including a flowering bougainvillea that climbs up a pillar in the living area.

The studio exudes a remarkable equilibrium between natural and industrial, even with the recent interruption of the couple’s new son Ellis. The warmth is largely due to the items Jason and Tiffany have rescued from the landfill. ”It’s an organic process, a constant evolution, but a very natural one,” he says of their eclectic taste. “We love the idea that something has a history as an object before it becomes this other thing for us.” In one corner stands an antique pram that used to be Tiffany’s and is now a changing table for Ellis. Along a nearby wall is Cot in the Sheets, a bench Dressler made with his brother Lars. The seat is made from machine belts used by the dry cleaner downstairs. ”They start out white,” Jason says about the leatherish webbing, but the wear gives them that unique patina.”

Dressler pieces are found throughout the studio and blend in with an assortment of yard sale finds. A two-seater and ottoman made by the brothers is constructed out of recycled upholstery and solid walnut. It’s a prototype for their Bare sofa and sits near an Eileen Gray chrome and glass end table; hanging from the ceiling is a vintage chandelier in grey and black. Also suspended from above is an old factory window that divides the kitchen and living room. “The quality of the glass refracts the light from the east beautifully,” Jason muses. ”It looks great in the morning.” Constant rearranging and refurbishing is a favourite pastime for the couple. ”We’re aiming for a timeless aesthetic,” says Jason, “the point where the natural world and industrial world meet.”

Originally published in our Fall 2008 issue as Salvage Love.