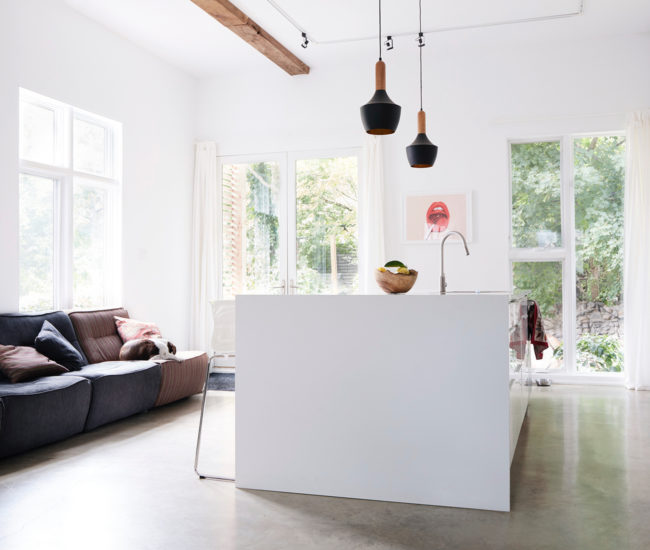 Thomas Bollmann and Ingrid Jones, the creative partners and owners of Seed9 Photography, designed an east end space that serves as a creative studio, gallery space and a downright photogenic home – all on a tight budget

Thomas Bollmann and Ingrid Jones aren’t architects. And when the couple, who co-founded Seed9 Photography9, were looking for a house, they weren’t planning on a major building project. Their needs were straightforward: after losing a west-end studio space, the duo wanted a residence that could also house their photography practice. And after numerous bidding wars – this is Toronto, after all – they thought they found a match in a bungalow on the artsy (and increasingly popular) Rhodes Avenue, steps from Coxwell and Danforth. And it sounded beautiful.

“It was a bit like [a bungalow] in Muskoka,” Bollmann says. “You’d come in and the doors would be open, there was a breeze coming through, it was full of sunshine, and it was white inside. It was tiny, but it was okay, right? We figured we would make it a little bigger and call it a day.”

Indeed, it sounded beautiful. But after placing the winning bid, Bollmann peeked into the attic. And he discovered… a body. Well, not quite. But he did get a nasty surprise. “Mold,” he says. “The entire attic was just black mold. You couldn’t see, all the light was swallowed up by it. It went through the walls all the way to the basement. It was all you could smell.”

Jones had an immediate allergic reaction – and one so bad, that she could not enter the house. It wasn’t salvageable, and “whole house basically had to come down,” says Bollmann. So it did: due to its compact size, it took a half-day to raze the 600-square-foot bungalow. Then, the couple was faced with the reality of a blank slate: on the one hand, they could design the live-work space they needed. On the other, with no place to live, they had a tight timelines and an even tighter budget. (We don’t need to remind you about Toronto real-estate prices, after all.)

Indeed, Bollmann and Jones aren’t architects. But suddenly, they were tasked with reimagining his home’s design.

The couple created the design for the home and enlisted the help of Tokalon Design Group to draft the drawings, ensuring their asks were in line with Toronto building code. After their run-in with mold, they wanted a house that would be clean and easy to maintain. The couple had a fondness for Japanese and Scandinavian design. And finally, they wanted a home that could accommodate the couple while also serving as a workspace and an occasional gallery.

The original home was located on a tiny lot with a large front yard. So to extend the footprint of the house, the couple elected to push the foundation – made from insulated concrete blocks that assemble like LEGO blocks, which are common in the North and Bollmann’s native Germany – towards the street, which created a walk-out basement and small back yard (more on that later). Then, they built a two-storey structure clad with low-maintenance corrugated metal, chosen because it reflects heat during the summertime, and fire- and insect-repellant charred cedar.

Visitors enter via a steel door clad with driftwood Bollmann sourced from Lake Ontario. The main level is defined by purity and unfettered lines: it features polished concrete floors and 12-foot ceilings, both chosen for visual impact, functionality and climate control. The home has no air conditioning, and relies on passive cooling provided by concrete floors, ventilation and insulation.

That deliberate minimalism lends the main floor to multiple uses – Bollmann uses it as a shooting space, while Jones, a creative director and independent curator, uses it as an occasional gallery space, showcasing artists from around the world. The kitchen is fully IKEA – “we went for a budget friendly option that offered clean lines to fit with the design’s aesthetic,” Bollmann says – with a compact fridge, Bosch appliances and storage that climbs to the ceiling. Two quartz slabs were used for the island’s countertop and surfacing in the bathroom.

A straight, 27-step staircase leads visitors upstairs and to the master bedroom, which has one noteworthy quirk: it has a balcony cut-out, a design decision borne out of Toronto’s building code. “It was made by necessity, because [the second floor] was 0.1 per cent too large,” laughs Bollmann. “It’s stupid. It makes no sense, right? In the beginning, we hated it, but now we love it. It’s so intimate, and it’s just for the master bedroom.”

With two skylights and three large windows, the bedroom is almost treehouse-like, immersing residents in the neighbourhood’s mature foliage.

The second-storey also features an office and a bathroom devised as a wet room – with sloped concrete flooring, no glass is used in its shower. Like much of the house, it’s built around simple maintenance. Each storey, Bollmann estimates, is about 650 square feet.

Having outdoor access was a priority for the couple, and that’s evident even in the project’s basement. Along with the housing the essentials – like laundry facilities and a compact boiler, which provides on-demand hot water – it features a bedroom, a spa-like bathroom, large windows and a walk-out. After noting that the backyard wasn’t visible from the street or by neighbours, the couple elected to build an outdoor shower and a garden filled with stones and slabs sourced from former streetcar tracks. How Toronto. 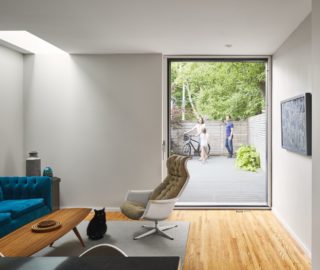 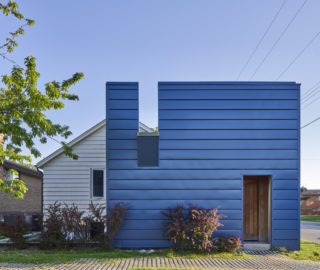 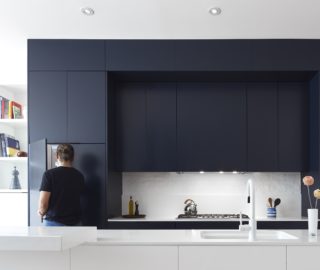 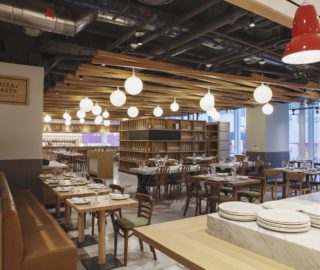