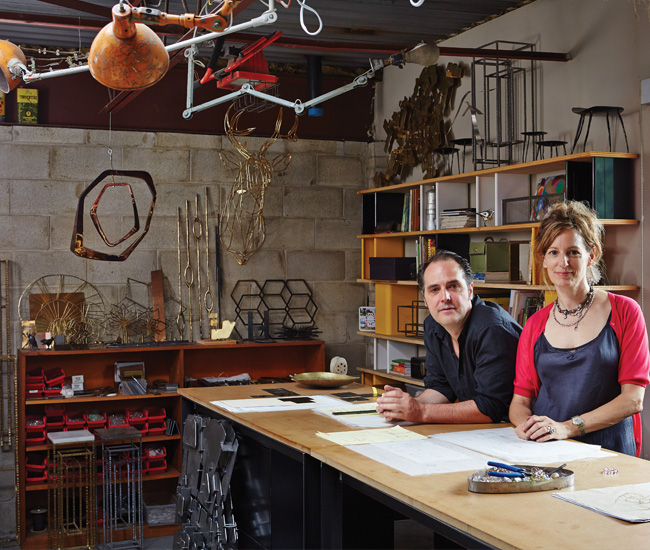 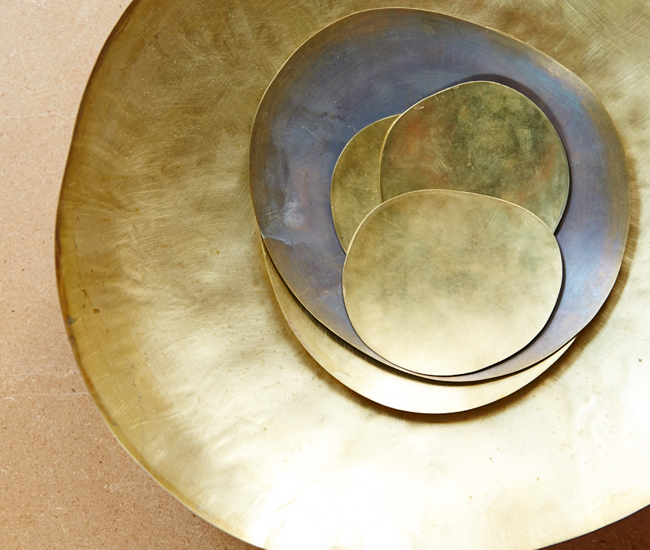 Textured and cupped patinated bronze prototypes for a lighting installation in a Hong Kong condo project. Photo by Naomi Finlay. 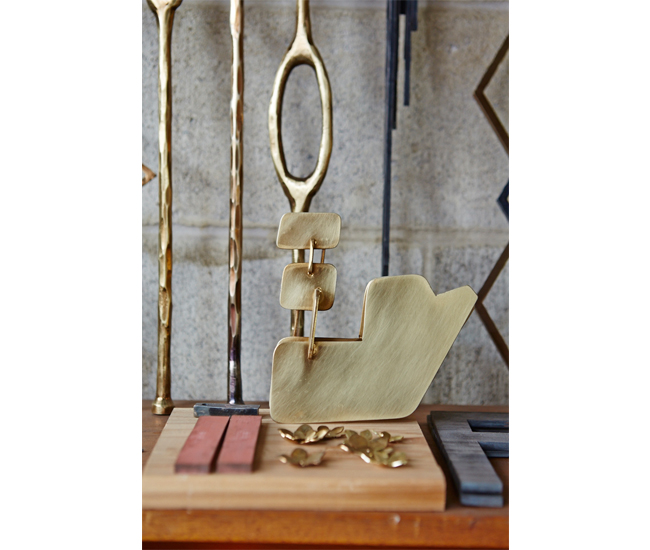 Hand-cut, brass-plated steel sections of a gate for the Dalloyau patisserie in Hong Kong. Photo by Naomi Finlay. 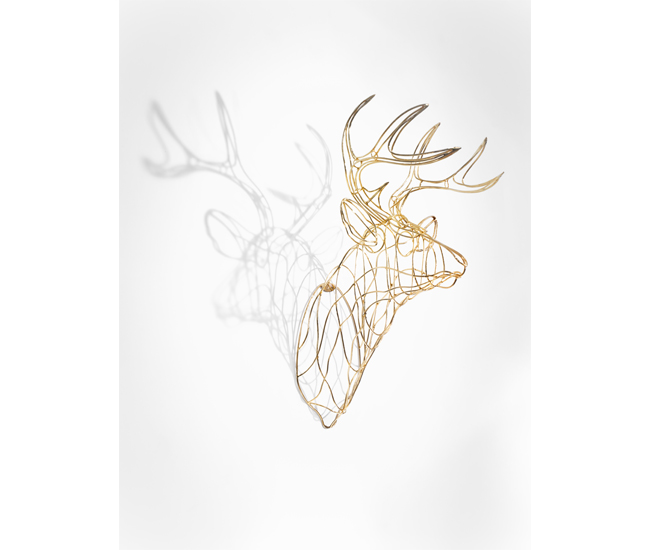 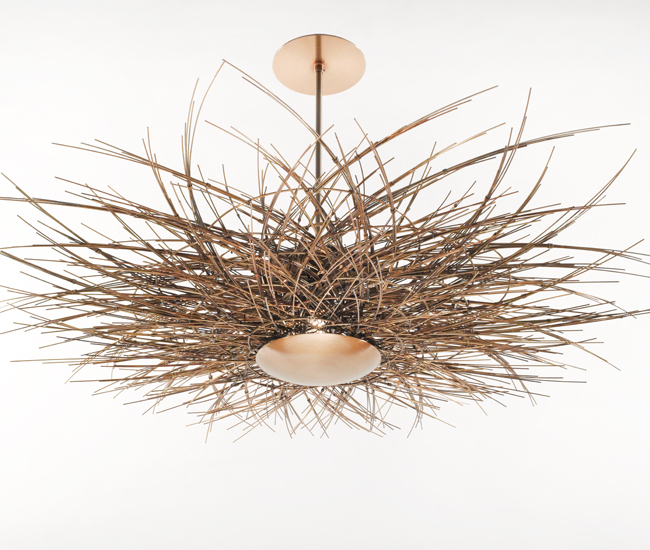 The Rue Picot chandelier is done in hand-formed and hand-wrapped brass-plated wires. Three styles are available at Avenue Road (from $4,800). Photo by Ben Rahn/A-Frame Studio. 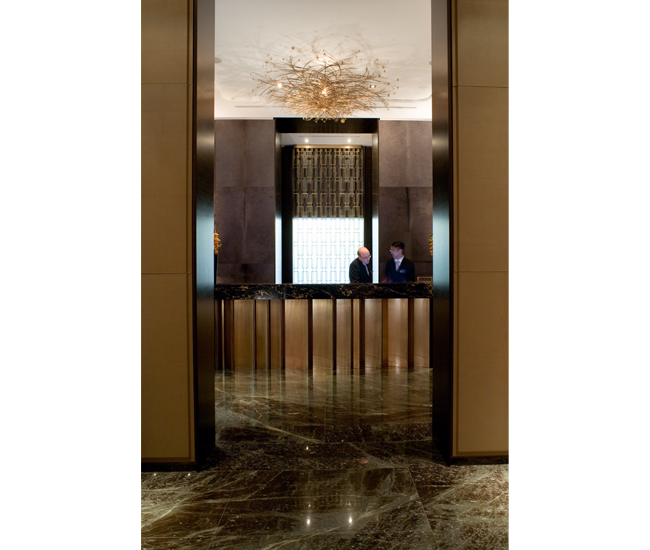 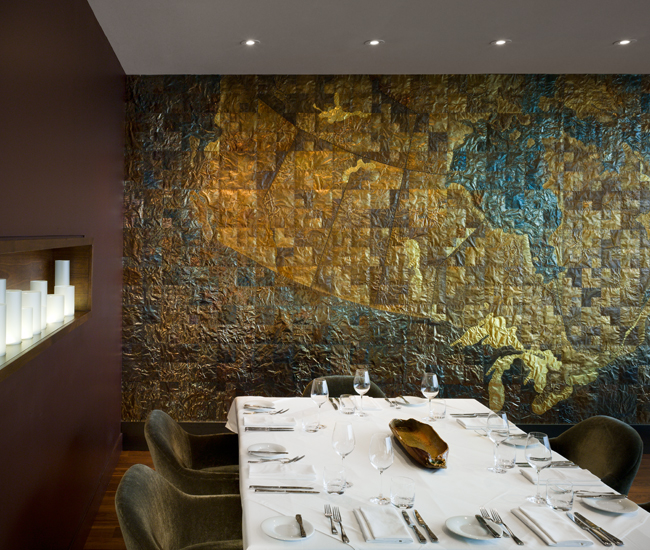 For Canoe restaurant’s map of Canada, 3,000 hand- burnished pieces of patinated brass were hammered together on site. Photo by Ben Rahn/A-Frame Studio. 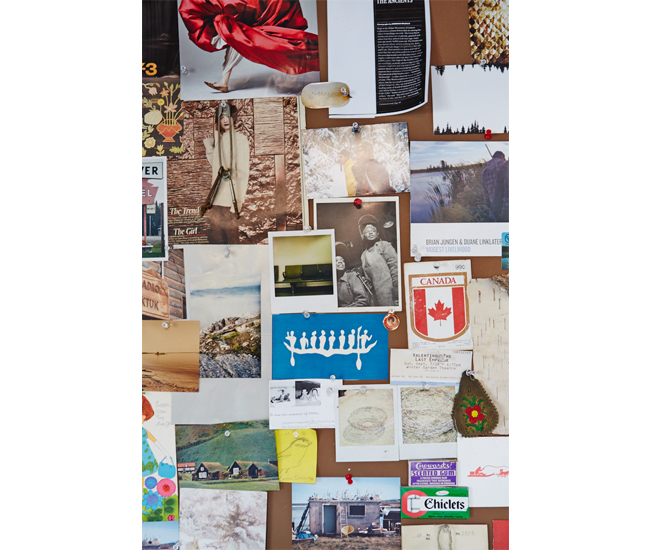 When Kelvin Goddard and Lisa Santana speak, the narrative jumps between them, twisting off in unexpected directions before coalescing at exactly the right moment. Perhaps unsurprisingly, the exquisite, often large-scale metal creations they produce conjointly as Unitfive Design come together in almost exactly the same way: as a collaborative conversation between a pair of artists whose career path is as unconventional and surprising as their acclaimed body of work.

Before forming Unitfive Design in 1996, Goddard was an interior designer while Santana worked in the fashion industry. His early experiments with welding sparked her imagination. They began working together, soon developing an aesthetic based on unique textures and finishes, and a distinctly artistic touch. “We always want to make metal not look like metal,” Goddard says. “But that’s not how we start out,” Santana quickly adds. “It’s almost instinctual.” Goddard finishes the thought: “We like to push the boundaries of what the metal can do.”

The pair’s unorthodox approach soon caught the attention of major firms here, like Yabu Pushelberg and Anacleto Design, as well as other interior designers in the United States and abroad, landing their pieces in hotels and restaurants worldwide. At Oliver & Bonacini’s Canoe, a huge map of Canada in patinated brass typifies the couple’s path-less-travelled approach. Shown an image of bacon grease by Lindsey Anacleto, Goddard and Santana loved its movement and texture. The formations reminded them of a landscape, which led them to think of the restaurant’s blank wall as a topographic map of Canada, coloured by aerial views of the country’s land formations. At the Hazelton Hotel, vintage metal jewellery added to a nest of looped wire creates the illusion of multiple light sources when, in fact, the 2.5-metre-wide chandelier uses only one bulb. “There are so few people who do what they do with the same artistic and technical dexterity,” says Glenn Pushelberg.

It was an observation by Pushelberg, in fact (“You could make this for a home!”), that prompted the development of a new line of residential pieces at Avenue Road; a chandelier takes its cues from the Hazelton Hotel fixture, and the gold-plated Stag Head performs a deft sleight of hand in which metal looks like a 3-D pencil sketch. But despite new projects in Dubai, Hong Kong, Kuwait and Singapore that showcase their mastery of cutting-edge technologies, Goddard and Santana also remain committed to the traditional techniques of metalwork – their atypical path always leading them back home.

Originally published in our Winter 2014 issue as Unitfive Design.