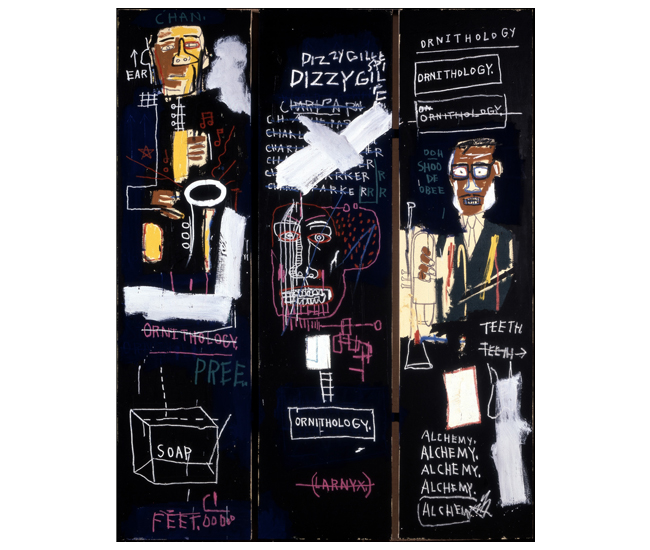 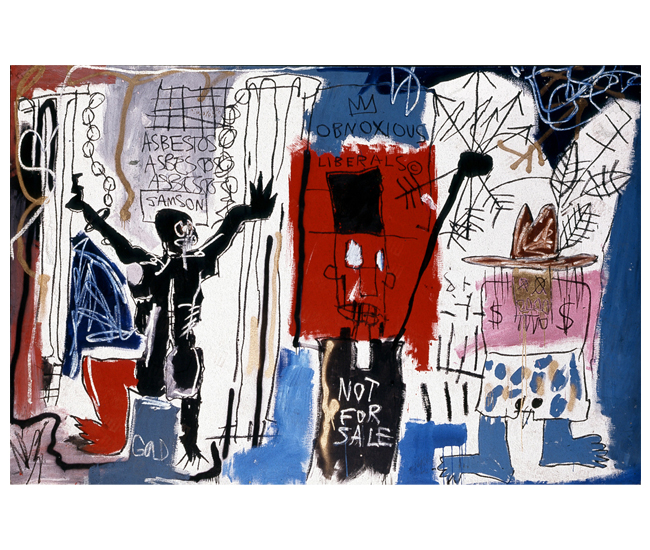 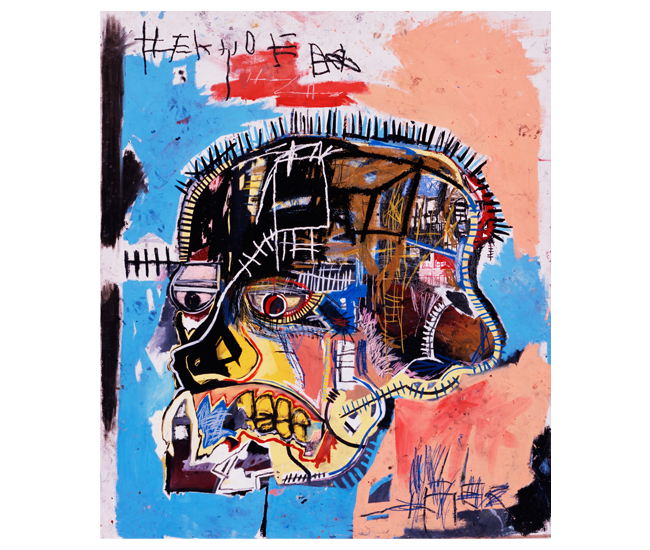 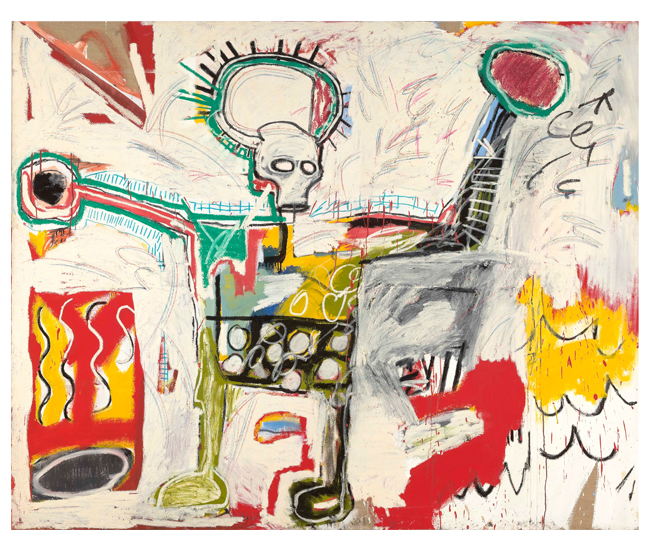 A master of juxtaposition, Jean-Michel Basquiat combined street art-like scribbles and expressionist-style painting to create densely layered mash-ups that spoke to the social tensions prevalent in New York in the 1980s. Sadly, the subject matter of many of his compositions remains all too topical today. 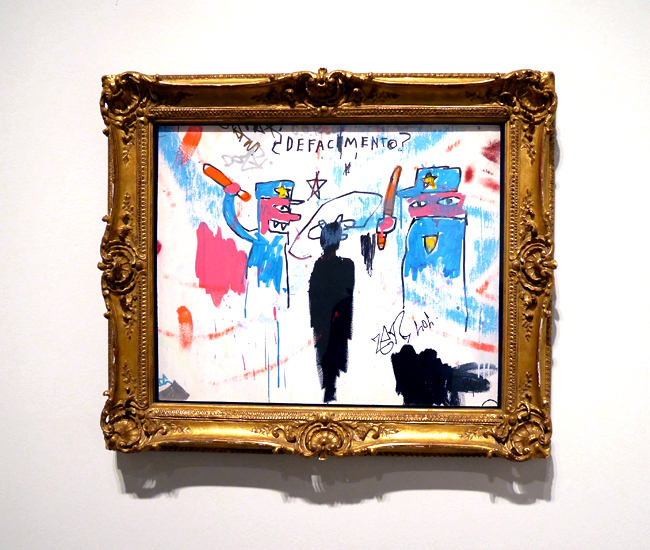 For example, a 1983 piece painted to honour Michael Stewart – a black graffiti artist who was beaten to death by police officers for tagging a subway station wall – is especially chilling given that we continue to grapple with cases of racially-motivated police brutality three decades later.

Indeed, Now’s the Time is more interested in the enduring relevance of Basquiat’s work – both as fine art and as larger social critique – than it is in the artist’s own tragic biography. (As anyone who’s watched the documentary The Radiant Child will know, Basquiat died at 27 from a heroin overdose.) Filling the space formerly occupied by the AGO’s pop culture-heavy Alex Colville show (which paired Wes Anderson film clips with a soundscape by electronic musician Tim Hecker), this retrospective is a more formal affair. The commentary from scholars and community members that accompanies the 85 pieces on display suggests that Basquiat deserves to be viewed among the likes of Picasso or Martin Luther King (whose “I have a dream” speech plays part-way through the show), not among the rock star members of the “27 Club.” 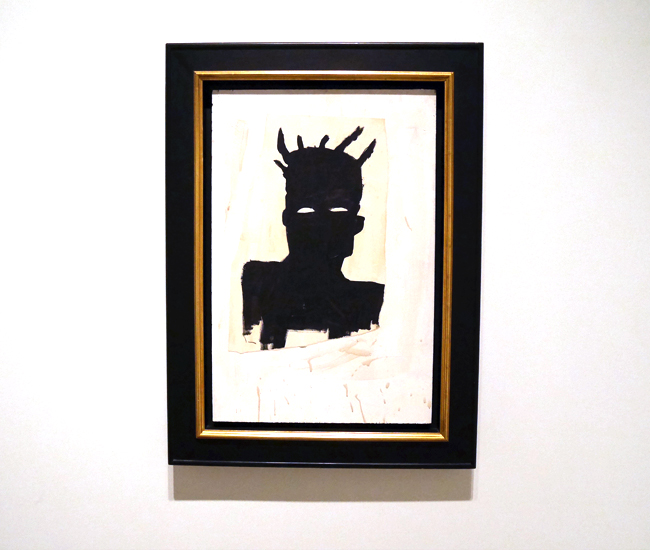 Basquiat’s own struggles with identity are evident in his self-portraits. In one, from 1983, he draws himself as a shadowy figure with slit-like eyes – said in the accompanying caption to reflect the way he felt like an “alien” working as a half-Haitian, half-Puerto Rican art star.

Of course, Basquiat quickly realized that his fame afforded him a unique opportunity to spotlight other individuals overlooked by his peers. Dark Race Horse, for instance, is an illustration of a foot that pays tribute to Jesse Owens, an African-American track-and-field athlete who won four gold medals at the 1936 Summer Olympics in Berlin, held at a time when Nazi propaganda was attempting to promote the alleged superiority of the Aryan race. Crowns or halos appear on top of many of Basquiat’s other anonymous protagonists to emphasize their nobility. Another recurring symbol in the artist’s pieces – boxing – also speaks to racial struggles. 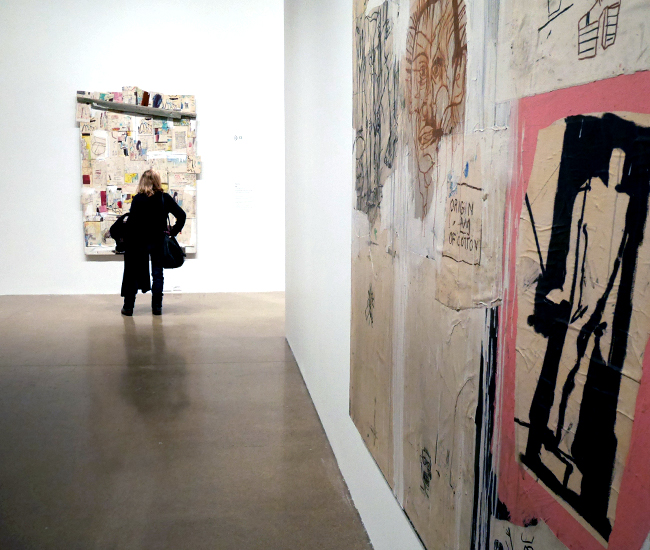 Above one of his particularly chaotic-but-beautiful collages, the three-panel Horn Players, a quote from Basquiat addresses the wide range of material that inspired his large canvases. It reads: “The more I paint, the more I like everything.” Charlie Parker song names, illustrations inspired by anatomy textbook Gray’s Anatomy and Mexican comic book pages all make appearances in the artist’s work. A Panel of Experts, for example, features playful superhero doodles and a list of breakfast cereal ingredients alongside a drawing of a shotgun. In person, these contrasting elements are terrifically textured – the physical depth of each artwork a reflection of the breadth of Basquiat’s insight. 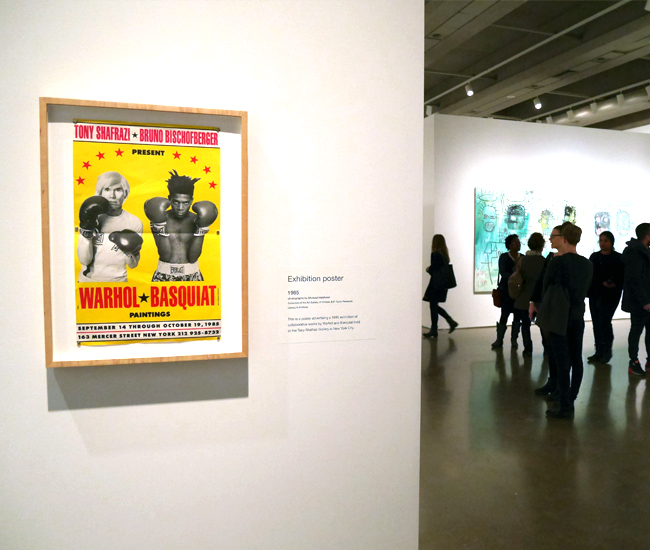 Elsewhere in the show, a wall displaying Basquiat’s collaborations with Andy Warhol is another area of interest. The three pieces reflect each artist’s distinct attitude towards capitalism – product logos added by Warhol would later be obscured by Basquiat. Nearby, an exhibition poster promoting a joint show at New York’s Tony Shafrazi Gallery plays off this dynamic by showing the two artists in boxing gloves. It’s a particularly fitting portrayal of Basquiat, who, even long after his passing, is still fighting for equality.

Jean-Michel Basquiat: Now’s the Time is on the Art Gallery of Ontario until May 7.