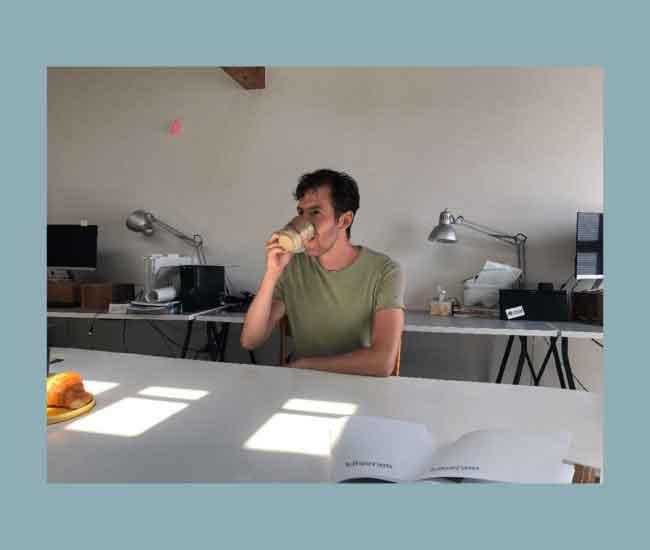 Kilogram Studio has created 20 shops (and counting!) for Greenhouse Juice Co. in Toronto. We asked principal Kfir Gluzberg how he keeps things fresh

Confession: we’re coffee lovers. And this should go without saying but, we love design, too. So we’re launching a new online series dedicated to both. Recently, we sat down with Kfir Gluzberg, principal architect at Kilogram Studio, a blossoming design firm tucked into a Queen West laneway. We talked, of all things, about cold-pressed juice. To date, he’s devised 20 vibrant interiors for Greenhouse Juice Co. (a Canadian brand) in remarkably fiddly locations: a two-metre-wide laneway in Midtown, under an escalator at Brookfield Place and, recently, in a sunless Union Station corridor. Read our interview with him below, and watch this space for more interviews with the stars of Toronto design.

Designlines: How did you get started as a studio?

Kfir Gluzberg: I was working with RAW Design and LGA before starting my own studio. I was doing all sorts of small projects and got connected to Greenhouse Juice Co. through a friend of a friend. It’s through working with them that we became Kilogram Studio. 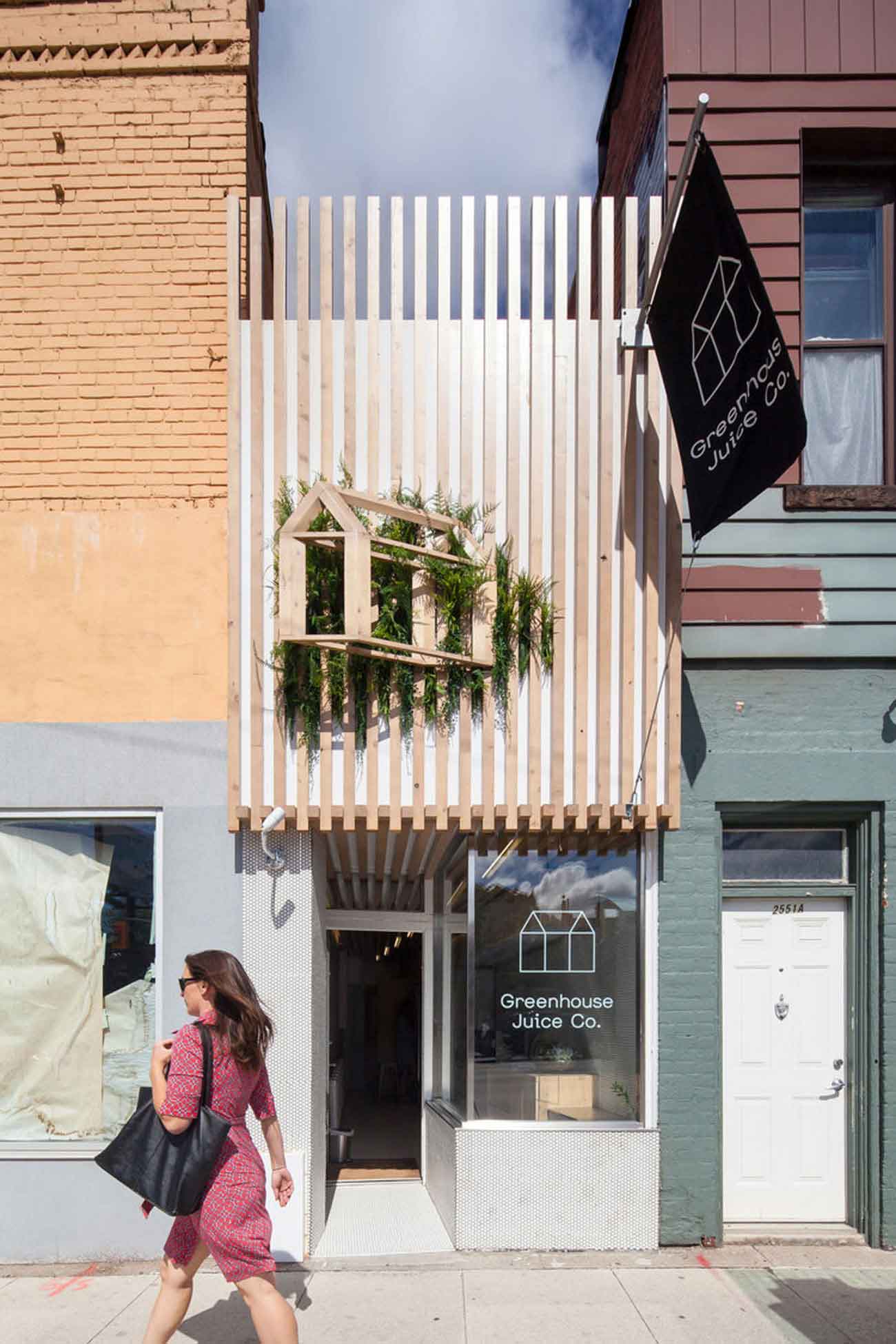 Designlines: Talk to us about your first Greenhouse Juice Co. project. What makes it memorable?

Kfir Gluzberg: The Canopy Shop (2553 Yonge St) is unusual because it’s only two-metres wide. Our first thought was: How did this shop even end up here? We speculated that it was actually a laneway because when you look at the storefront, there are two brick buildings on either side of this [formerly] dilapidated thing. So we said, “this is going to be a laneway again.” We tiled everything to make it feel like an exterior and turned the ceiling and roof into canopy volume. (Luckily, there’s a really big tree behind the shop, so there was already a treetop connection.) The open space below it is part of the sidewalk and street furniture. That got the ball rolling for our entire suite of Greenhouse projects. 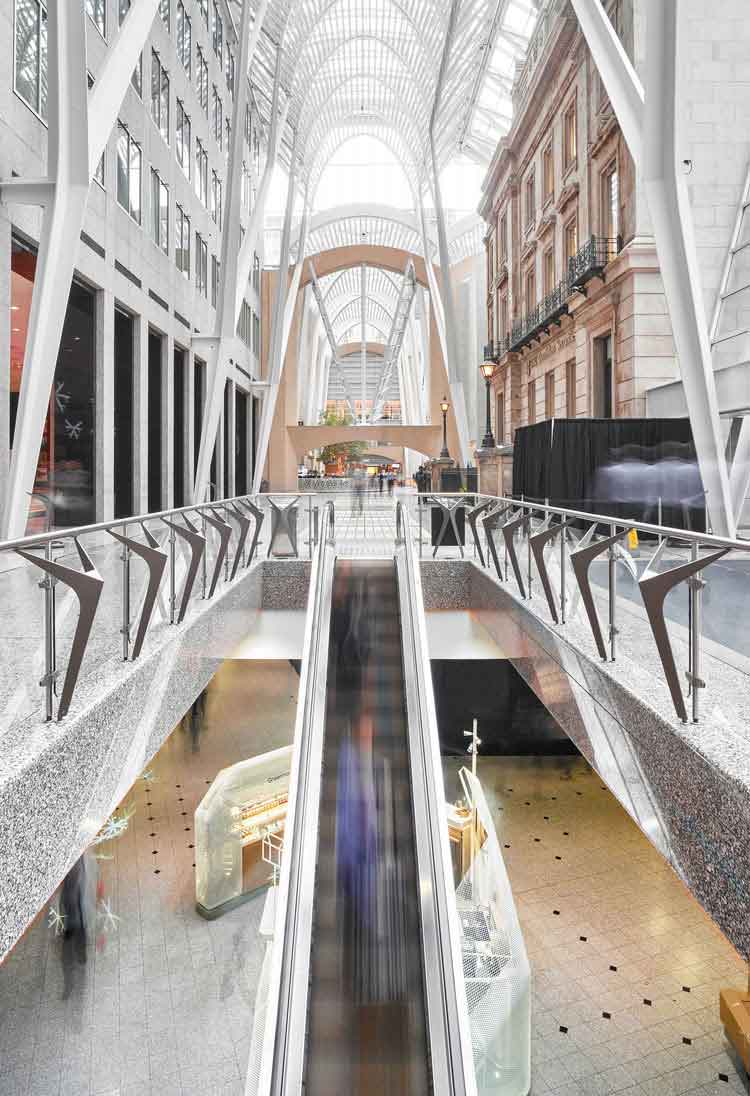 Designlines: What was the most finicky space you’ve worked on to date?

Kfir Gluzberg: I think the Split Rock project at Brookfield Place (181 Bay St) was difficult because it’s 360-degrees. You can see the shop from above as you come down an escalator. Then you walk all around this area pushed under an escalator. When you first go there, you think, this is not a good space to be. That was my first thought, anyway. So the store had to be this special object right from the beginning. 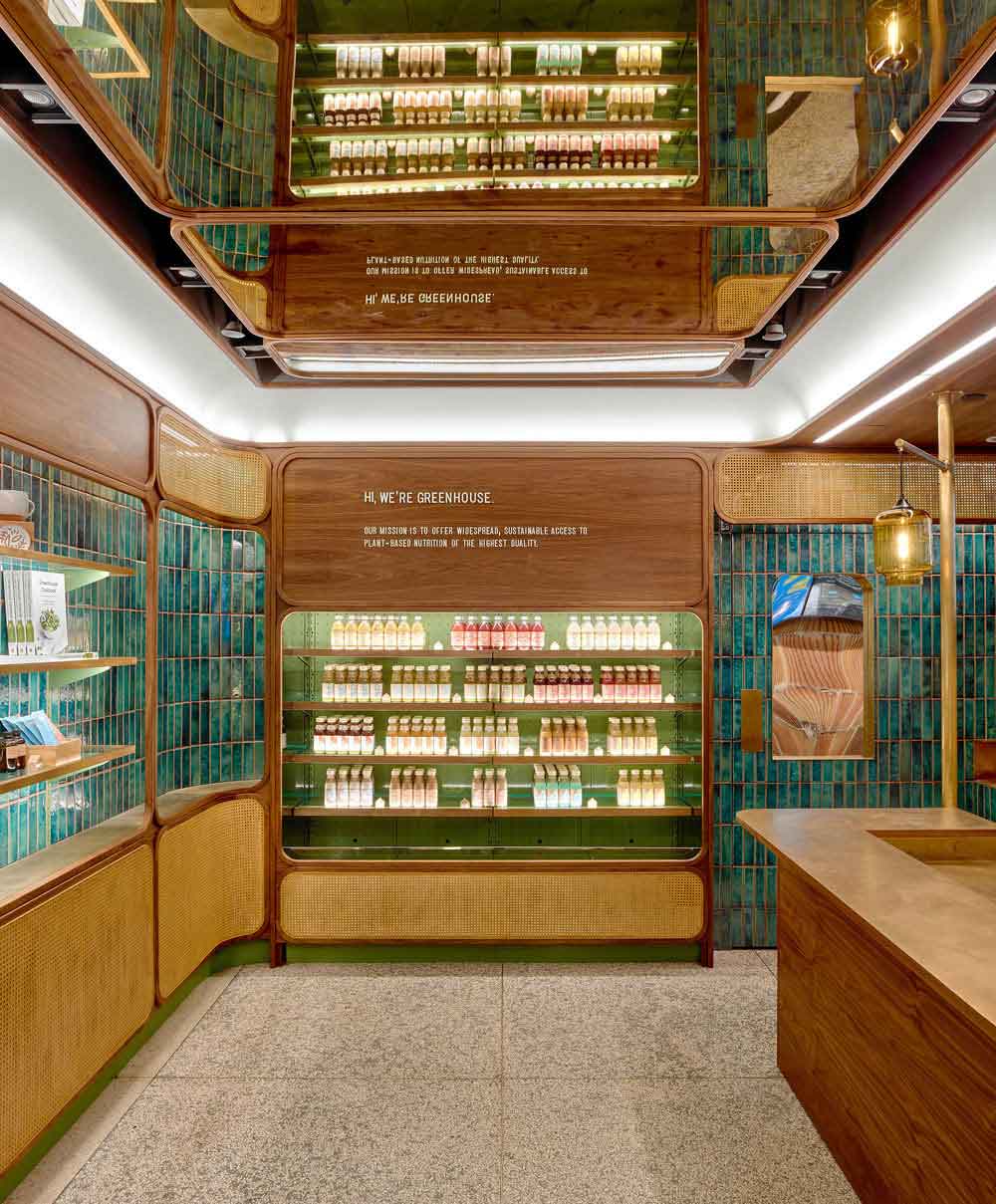 Designlines: Every store has its own identity. How do you choose your materials?

Kfir Gluzberg: It depends on the location. For the Night Scene one, it was copper mesh, for the Split Rock one, it was doubly curved metal. In Union Station, cane was the first design element that came into the project (fabricated by Maple Leaf Furniture) to say: this is a public Beaux-Arts railway station and in that period, cane was the go-to resilient material. Today we’re so used to being around plastics and stainless steel. At that time, you would have seen cane in trains and cafes because it’s easily cleanable and has all the durable attributes that we need in our shop today. It was good enough 100 years ago, and let’s keep that craft alive today and connect to that. 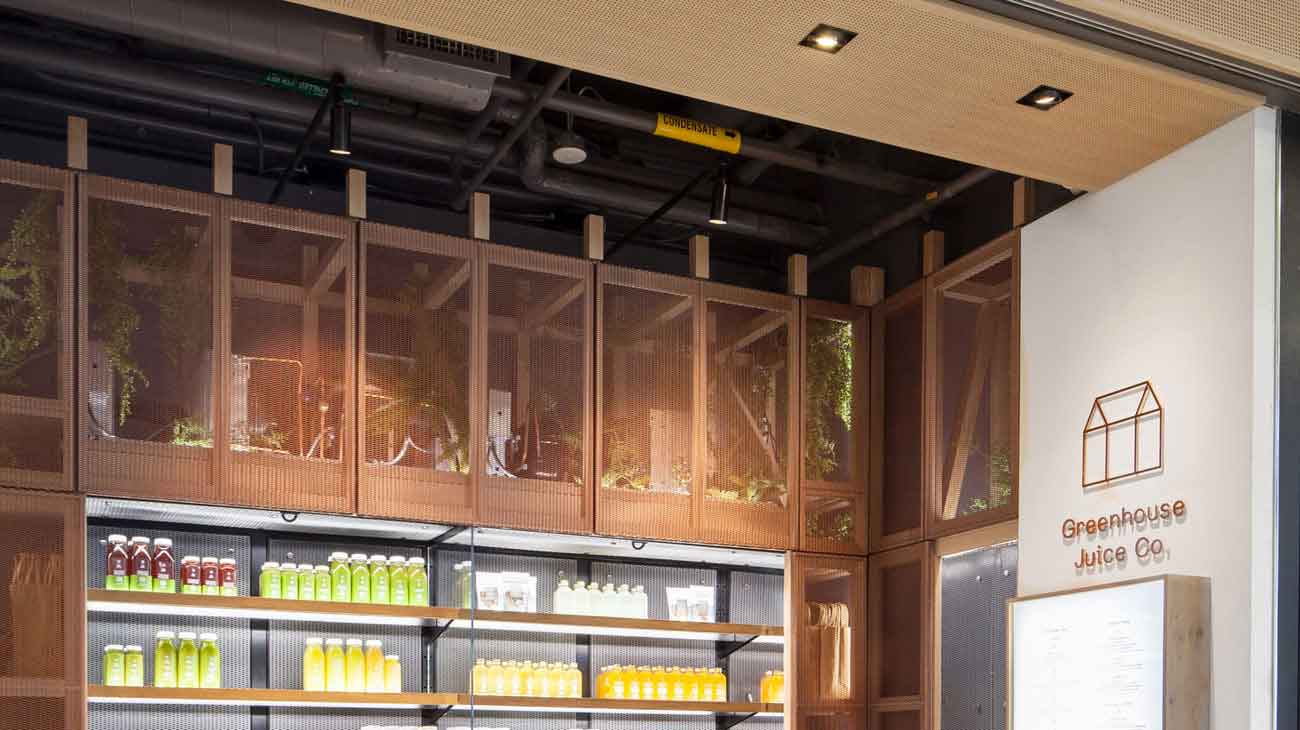 Kfir Gluzberg: This is the Night Scene project at First Canadian Place (100 King Street West). It’s in a food court in a shared space with iQ Food Co. With Greenhouse, technically the biggest design challenge was refrigeration. In my experience, fridges in North America are not the most beautiful objects. So in this project, the first step was to strip that box on the fridge off, because most of what you see on a commercial fridge — like a regular Coca-cola fridge — is an empty box. So let’s strip the box away and rebuild it, exposing the machinery. Inside there are compressors and fans and copper tubes. All this intricate hardware is beautiful. And if we mix it with faux greenery, then the machinery and the plants exist on one plane. And when the compressor blows the leaves, they’re all kind of moving around inside and it’s all a bit theatrical. 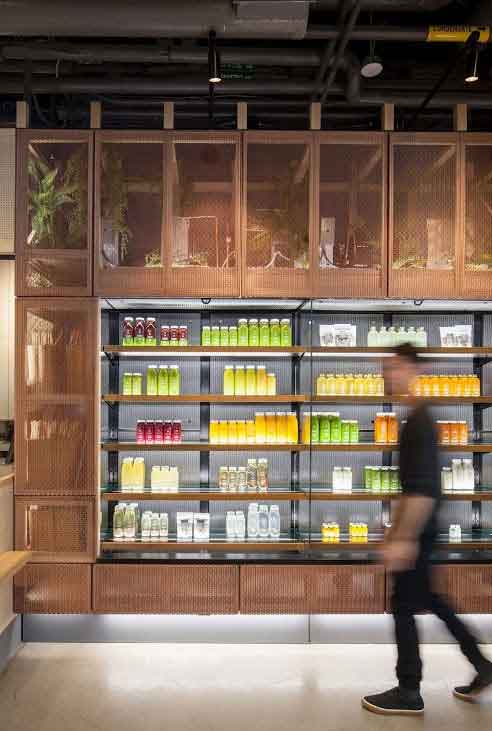 Kfir Gluzberg: Well, I am a sci-fi fan. So I appreciate that you said that.

Designlines: What are some practical considerations you can’t ignore when designing a retail space?

Kfir Gluzberg: How do you design a retail space without using signage? I don’t want to have staff behind a counter, but I need people to know where to pay. And the POS systems are not nice for the most part — today we have much better ones. So how do you deal with hiding them? Yeah, there are a lot of practical issues. With the fridges, we tried as much as we could to change their appearance, but also to make them not like fridges. So it feels very good when someone reaches for their drinks inside and they are surprised that it’s cold. And their juices are beautiful – those colours should be the first thing you notice when you walk in.

Kilogram Studio is picking up steam. They also recently completed the interior of a Japanese cheesecake joint, LeTao, in the former Caplansky’s Deli on College Street and were finalists for the RBC Canadian Emerging Designer Competition. 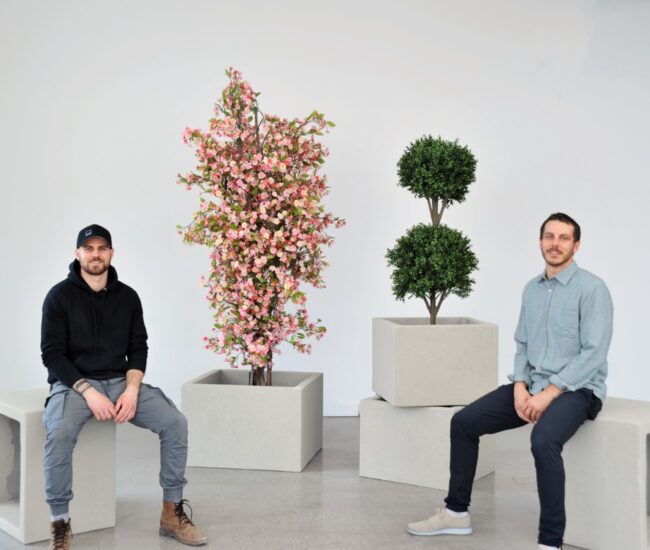 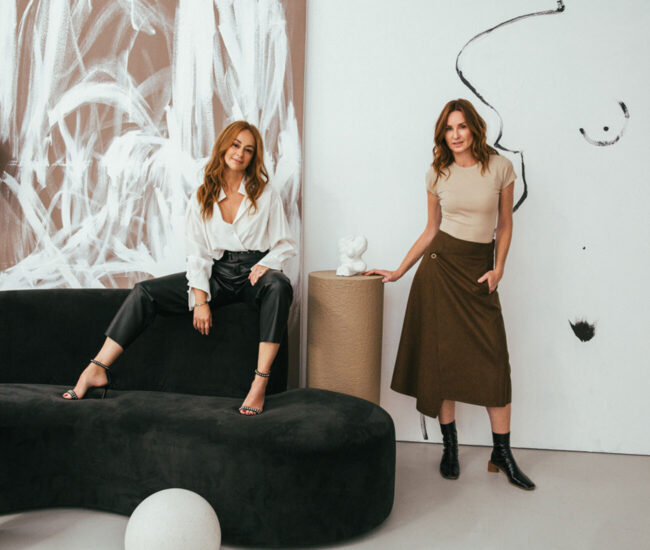 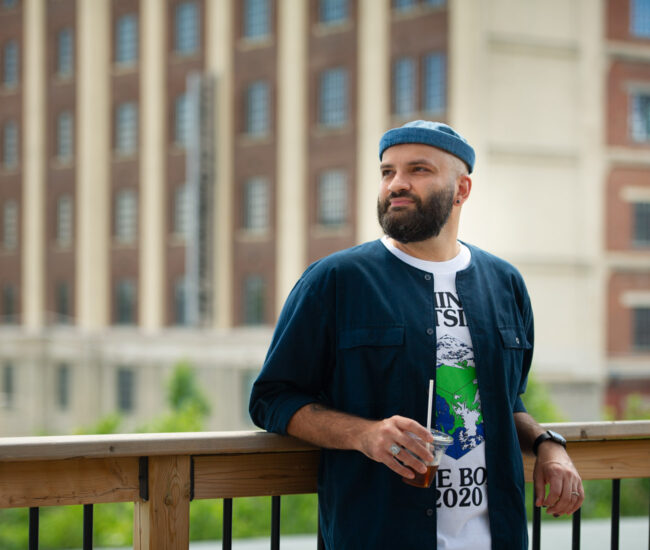 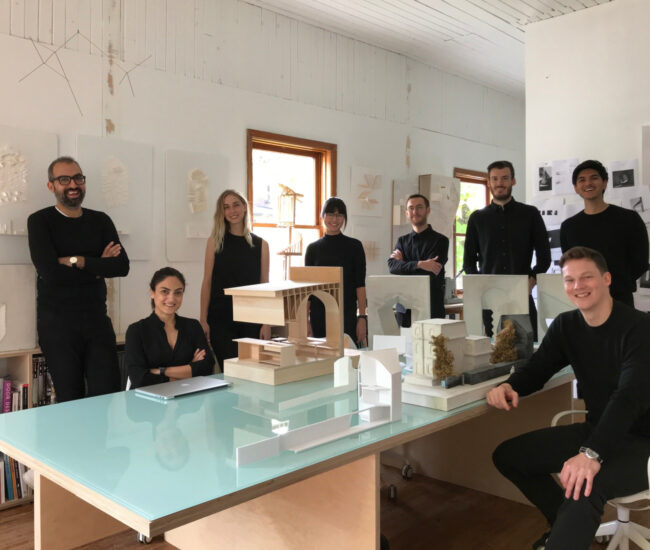