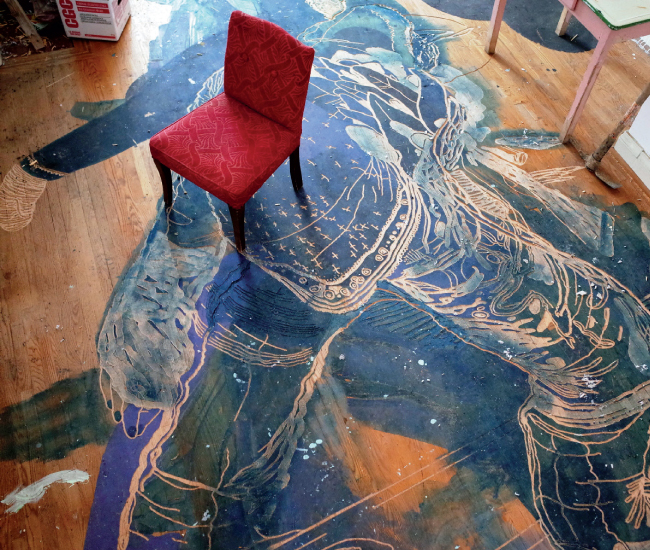 Demolish it and they will come

Unlike a gallery show, which can last for weeks or even months, a one-night-only event has a sense of urgency. Especially when the venue – a vacant 68-year-old Leaside house – is doomed for demolition. The art inside will come crashing down, too.

This is exactly how the Society of Homo Ludens (founded by Talayeh Hamidya and Gelareh Saadatpajouh, graduates of architecture and interior design programs, respectively) lured hundreds of visitors to a frozen house in late February for a unique group show called Divadale Project. It was the third instalment of their roving gallery series that “occupies spaces in their moment of transformation.” Over the past three years, the Society’s in situ exhibits have compelled Torontonians to see their city in a new light.

Inside the vestiges of the former Leaside home, notable artists experimented with space and created a dialogue with the structure and its materials. Interdisciplinary artist Sean Martindale charred wood in the fireplace, using the burnt ends to sketch charcoal scenes on the living room wall. He also reinstalled a ceiling fan in the stairwell, loaded it with paint and splattered the space to rainbow-murder-scene effect. In the bathroom, mixed-media artist Nick Sweetman took advantage of a burst pipe and an open window to create an undulating blue toilet glacier.

Up in the master bedroom, muralist Pascal Paquette took inspiration from poufy valances; he mimicked their forms in hot pink and neon green spray paint. Photo artist Cindy Blažević installed sculptural rolls of coloured filters on all of the windows, and played with the idea of looking at life in inner suburbia through rose-coloured glasses.

Downstairs, art collective PA System routered the image of a massive Nunavut hunter, with a bagful of ducks on his back, into the hardwood flooring – a nod to those that braved the cold to see it and to the late 93-year-old homeowner, Ms. Duck.

The demise of the mid-century home might be a loss for some, but the modern structure going up in its place will bring with it new lives, new thinkers, and maybe even some new city explorers.

Originally published in our Summer 2015 issue as Demolish it and they will come.