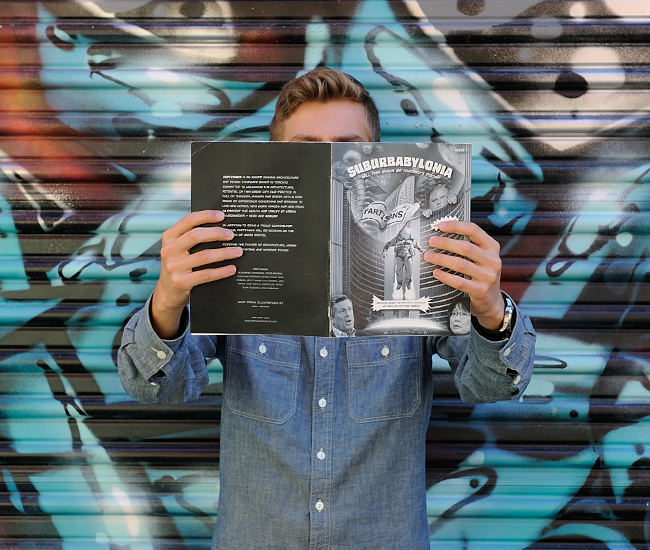 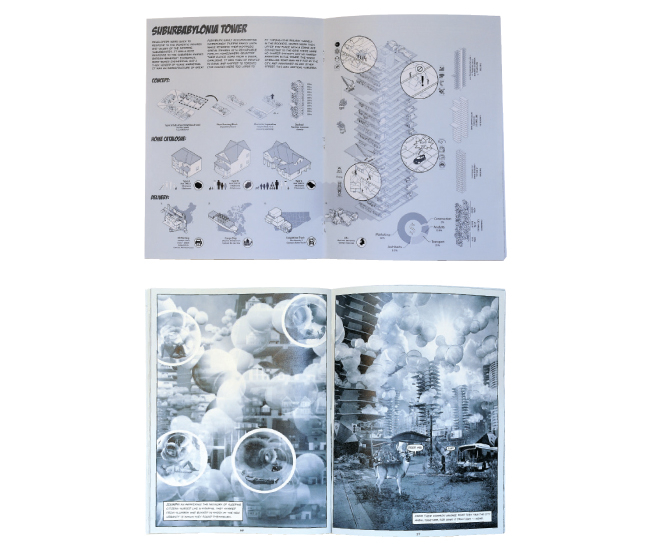 Do we live in Suburbabylonia?

Just in time for the mayoral election, architecture start-up Partisans, helmed by Alex Josephson and Pooya Baktash, is releasing its first graphic novel – part manifesto, part satire. Despite the book’s dreamy images and truth-seeking spaceman hero, the eponymous Suburbabylonia looks a lot like present-day Toronto, as construction cranes dominate the skyline. But in this off-kilter version of the metropolis, the unchecked building boom and ineptitude of municipal politicians reach a new height of absurdity.

At city hall, council and mayoral candidates polarize and fuel a war of the wards, while their constituents seal themselves up in contained bubbles. Meanwhile, the suburban developers that have powered the downtown condo boom are plotting the Suburbabylonia Towers: infinite stacks of mega-homes – 3-D printed in China and shipped here – connected by a central spiral of highway. The vision of these architectural abominations might spell our collective doom, or spur a radical rethinking of how we construct our surroundings.

As the firm’s name suggests, Partisans aims to engage architecture’s potential as a force for change. It is currently crafting such cutting-edge interiors as a spa with undulating wood curves in Georgian Bay, as well as a Bar Isabel offshoot wrapped in wood “muscle” tissue, and it’s modernizing Union Station to firmly position it as a 21st century transportation hub. “Designers need to be invested in ideas, dreams and projects for unfunded clients,” Josephson says. “Brash theoretical futures give citizens a sense of possibility.”

Indeed, what if instead of a dystopian future of McMansion towers, we could build true crazy towers – ecological, inventive structures with exciting high-tech facades? And to liberate our deadlocked ward system, could we amalgamate neighbourhoods that possess similar demographics and desires? A visual provocation spurring ambivalent Torontonians to engage in urban development, the limited-edition, 68-page book is the first in an annual series of subversive graphic novels in which Partisans will explore bigger and bolder ambitions for the city. “Our studio is like an iceberg,” explains Baktash, “where the biggest projects and ideas are hidden yet feed what’s being built on top.” partisanprojects.com

Originally published in our Winter 2014 issue as City of Dreams.