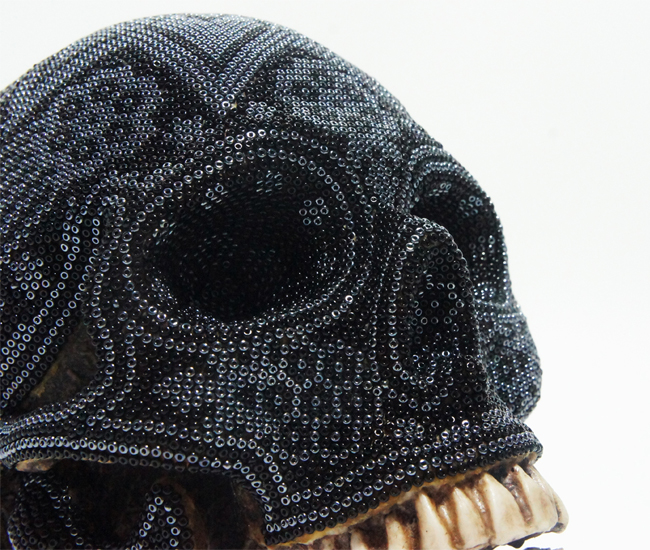 Growing up in Monterrey, Mexico, near the U.S. border, Ricky Sosa was more fascinated by rock ’n’ roll and American fashion than Mexican traditions. He listened to Black Sabbath and Guns N’ Roses, and designed T-shirts to sell at the local flea market. It wasn’t until he moved to Vancouver in 2003 that he recognized the vibrant culture he had left behind.

On return visits to the Sierra Madre Mountains, he would join peyote ceremonies and learn the decorative beadwork of the Wixáritari people (also known as the Huichol). Sosa now uses this precise patterning technique to create grim but alluring decorative skulls, which he began exhibiting five years ago to immediate acclaim. Last September, he made the move to Toronto, setting up his Revolucionario Design Co. in a Mirvish Village studio.

His human skulls, sourced through a medical supply store, are fabricated out of resin; his decorated animal skulls are the real deal. After coating one in beeswax and cranking up the music while it dries, he starts from the crown of the head and just goes for it.

“There’s no planned pattern. If I imagine an eagle or flowers, I start working from there,” Ricky Sosa explains. He uses a dressmaker’s pin to add beads one by one. Once they are in place, he rolls a tequila shot glass over the skull to impress them and to get an even surface. Depending on a pattern’s complexity, a skull can take between 35 and 45 hours to complete.

The finished product is a universal symbol of mortality that resonates across cultures. It also serves as a reminder to live life to the fullest while you can. Death, after all, is the great equalizer. “What I love about skulls is a quality of life thing,” Sosa says. “Everyone is going to go sometime, and it’s not going to matter how much money you have. When we go, we will all be the same.”

Originally published in our Fall 2015 issue.