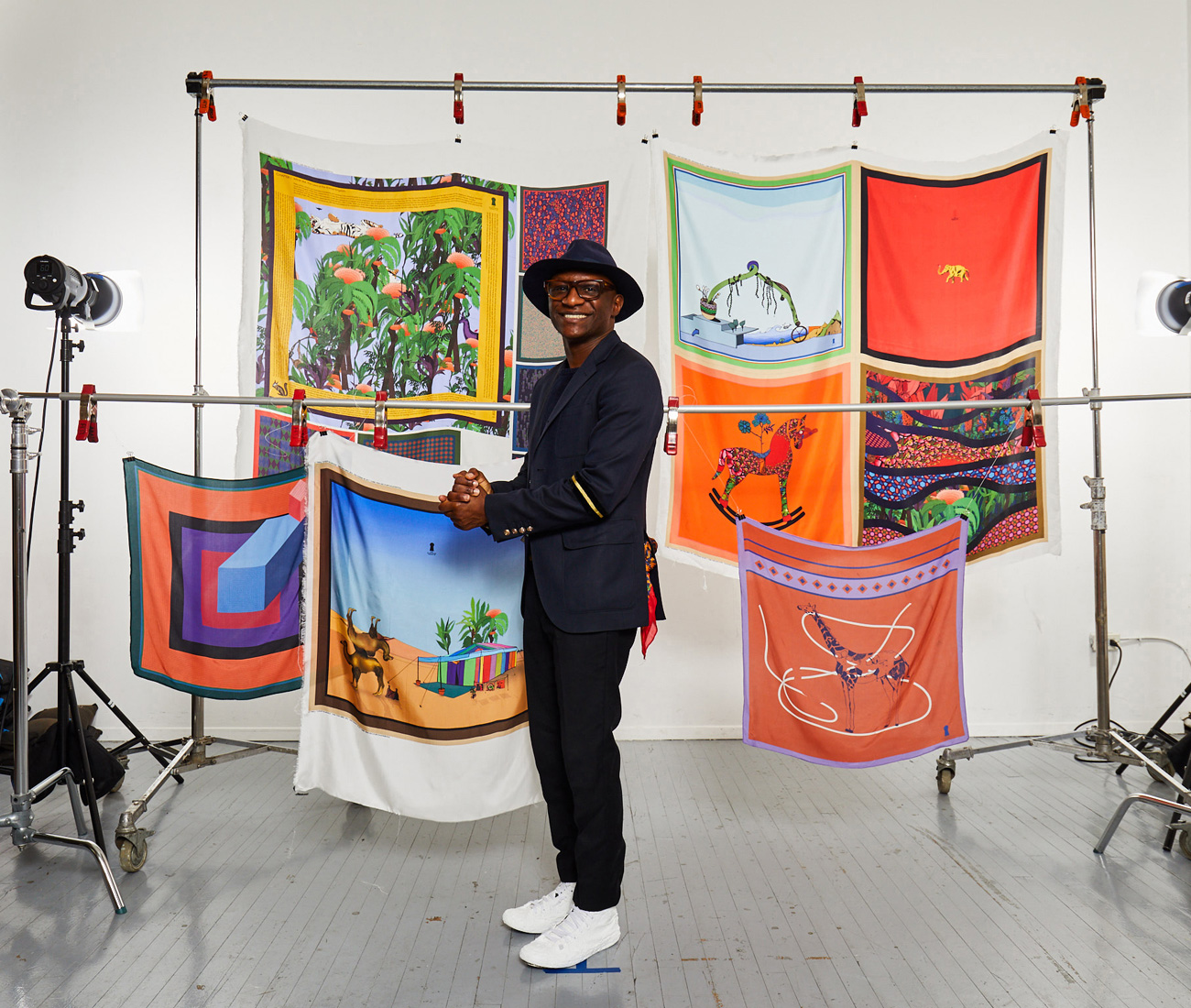 Designer Yaw Tony’s no-holds-barred approach to colour landed him in an exhibition at Germany’s Vitra Design Museum and an upcoming runway show at Milan Fashion Week 2018. Where will we see him next?

A purple antelope, seafoam-green vines, and a bull wearing a neckerchief jockey in the spokes of a fiery-red wheel. In the middle, a rocking horse is accented by shoots of tropical flowers. It’s not an acid trip – it’s a silk scarf by architect and designer Yaw Tony, and it mesmerizes with its wild colourscape.

The piece, A horse is a vain thing for safety: neither shall he deliver any by his great strength, is part of the inaugural collection of Tony’s LLiM – short for Life Liveth in Me. Designed in his Markham studio and screen-printed in the U.K., the textiles read like scenes from a highly stylized picture book, filled with contemporary patterns and plenty of takeaways for urbanites. Some are decidedly geometric, resembling an atomic chain or a swirling Fibonacci spiral – no doubt a testament to the Cardiff University grad’s background in urban design. Others are intensely narrative: an orangutan peeking out from behind a vine, or a lazing tiger swatting at a bat. These are retellings of ancient folklore, some from the artist’s native Ghana.

Ultimately, it was Tony’s provocative colour sequences that began drawing attention to his work – notably that of Amelie Klein, curator of Germany’s Vitra Design Museum, who swiftly picked up Tony’s This is Lovers Talk (shown on this issue’s cover) for its travelling “Making Africa: A Continent of Contemporary Design” exhibition. Tony draws by hand and adds colour digitally, defying the usual palettes. He concedes his use of colour is weird, challenging trending shades and, sometimes, the advice of his graphic designer friends. “To me, all colours work,” he says. “You just have to know how to use them.”

Although designed to be worn, the lyrical pieces also beg to be hung and exhibited on the wall. Emerald, periwinkle, and tangerine explode from the threads, and a keen eye will see secret characters emerge: a camouflaged deer, a disguised peacock. No wonder the brand’s moniker is a keyhole; as Tony explains, each piece is meant to unlock a peek into a distant world. “I’ve never come out of surrealism,” he says. “I’m stuck there.”

In addition to launching an online store, the artist is collaborating on MESFN LLiM, an avant-garde fashion line, which will show at Milan Fashion Week in 2018. He’s also transitioning his patterns into sneaker concepts. Although ripe to take on the fashion world, it’s Tony’s approach to the unseen that ultimately drives his designs. “I’m trying to speak to the inner person. The concept of the brand is that within everyone is something precious.” In a world of appearances, Yaw Tony is gazing in.

Find this story along with four other profiles of Toronto’s most creative people in our This Creative City print issue.