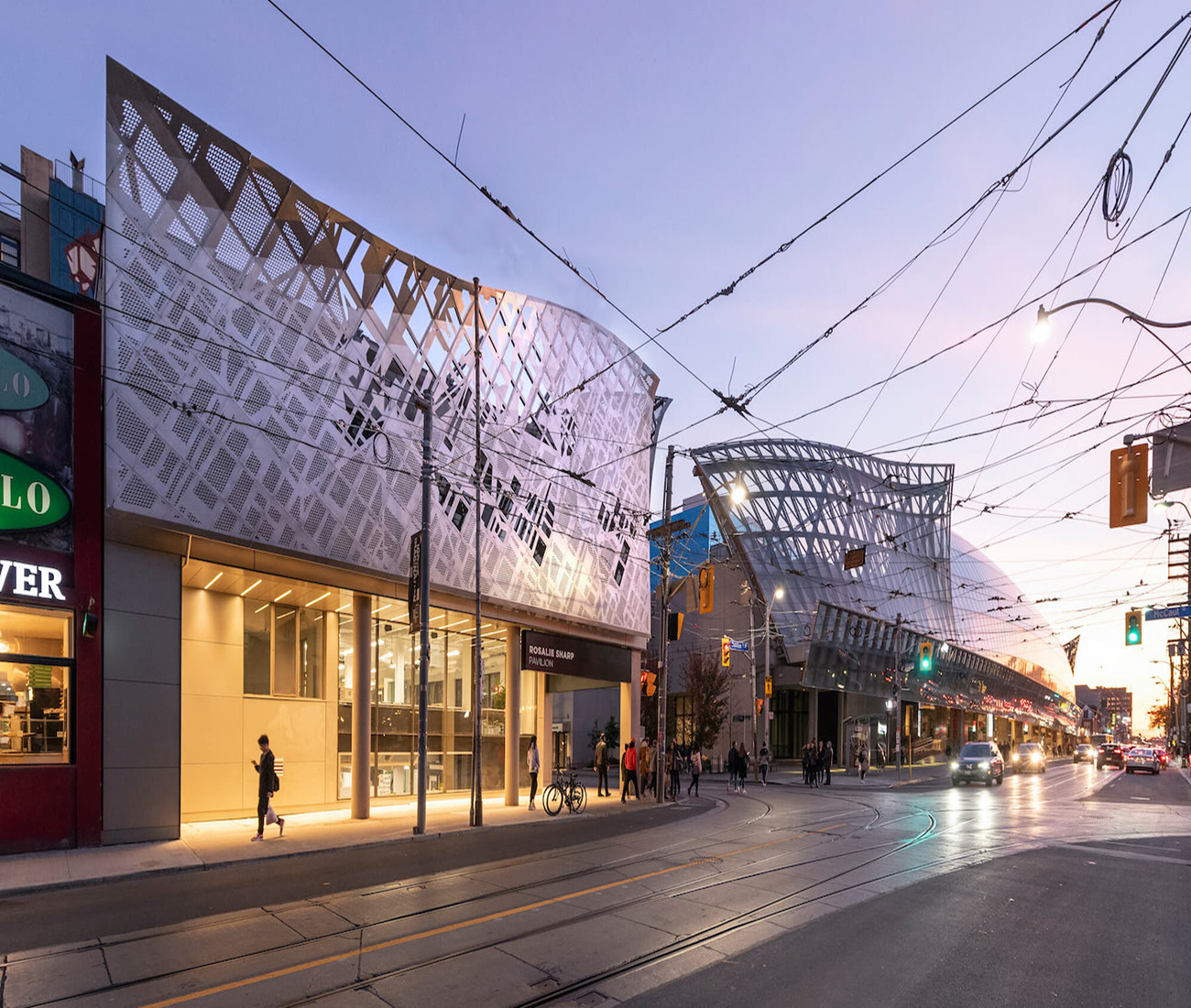 If iconic Toronto architecture was distilled to a single streetscape, it might well be the view south from the corner of Dundas and McCaul. Behind a tangle of streetcar wires, the long, swooping contour of Frank Gehry’s deft reinvention of the Art Gallery of Ontario (AGO) unfolds to the west, while the avant-garde modernism of Will Alsop’s Sharp Centre for Design floats like an otherworldly presence overhead. And in the distance, the CN Tower — all 553 metres of it — looms above the downtown skyline. For the Rosalie Sharp Pavilion – the new kid on the architectural block – it’s some company.

But the reimagined Rosalie Sharp Pavilion holds its own. On the southeast corner of Dundas and McCaul, local architecture and interior design firm Bortolotto has introduced a striking stainless steel facade scrim that transforms a modest 2.5-storey building into a dramatic gateway to the OCAD University campus. 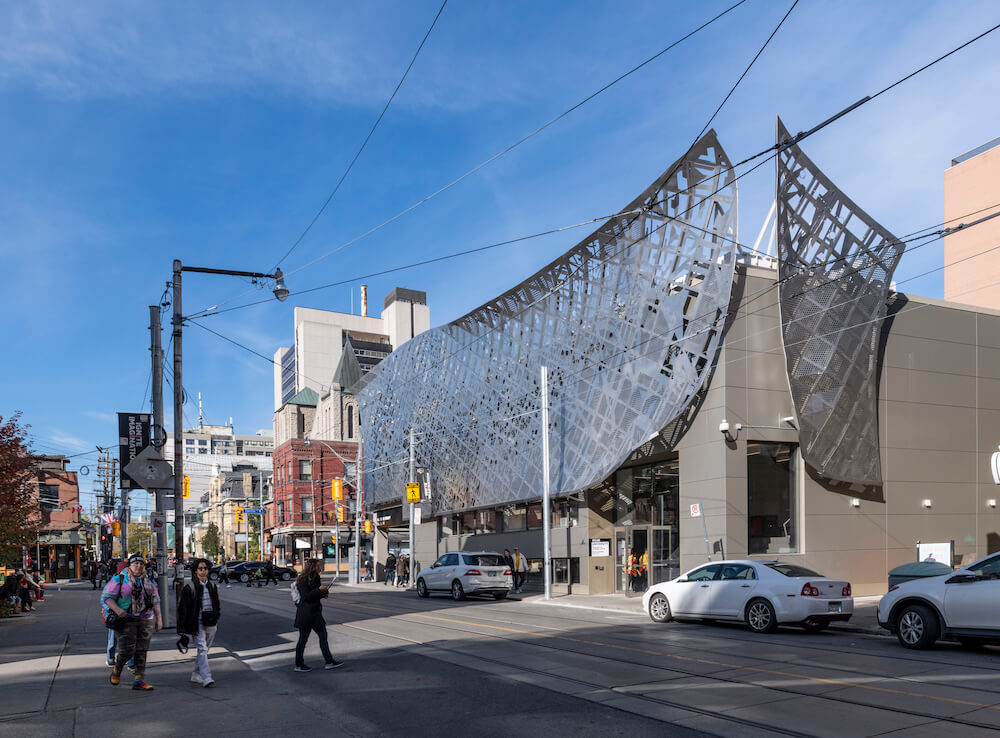 Catching the changing light throughout the day, the sinuous veil translates the graceful kinetic energy of Gehry’s glass facade across the street while asserting a distinct individual identity. Etched with an intricate laser-cut pattern, the varied lines and perforations resolve into a softer, gentler pattern when viewed from a distance. Curved up at the outer edges, Bortolotto’s design artfully gestures to the city around it. 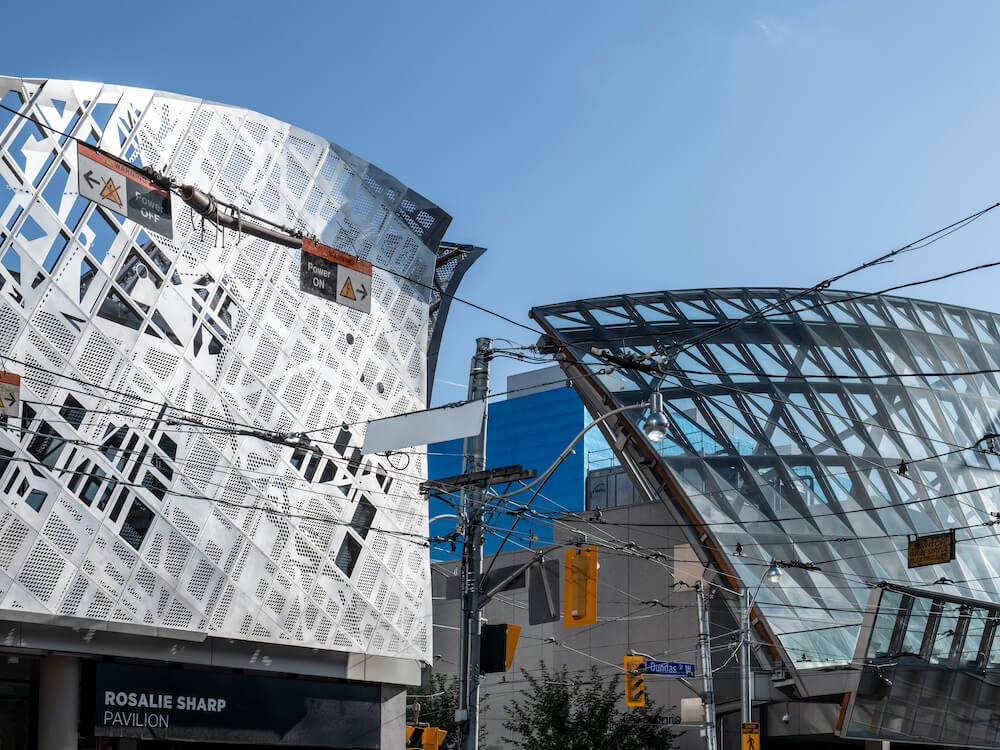 The scrim pattern inscribes the geography of Toronto’s art scene into a grand steel map. Galleries and studios are represented by circles, while angular chevrons and checks denote artist communities and public art clusters respectively. At the heart of the tapestry? OCAD University. 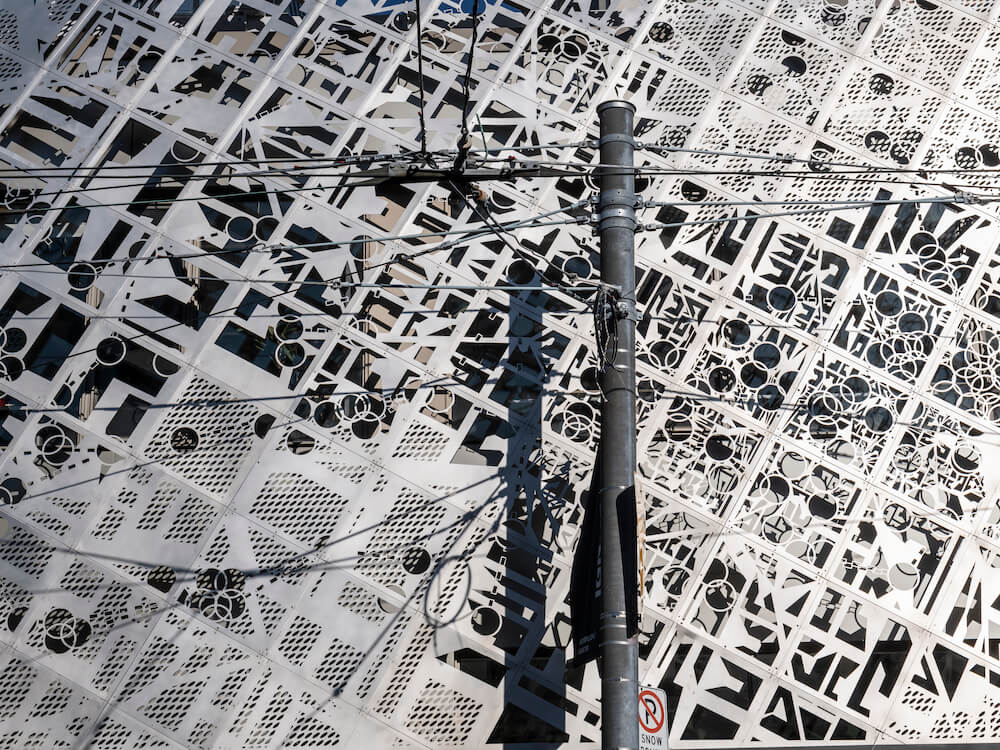 But for all its declarative presence, the reinvented building is more than a decorated shed. The new cladding doubles as a solar shade for the interiors, reducing heat gain and creating more comfortable conditions inside. Pierced by sunlight, the perforations paint another imagined street grid inside, furnishing the spare interiors with depth and texture. 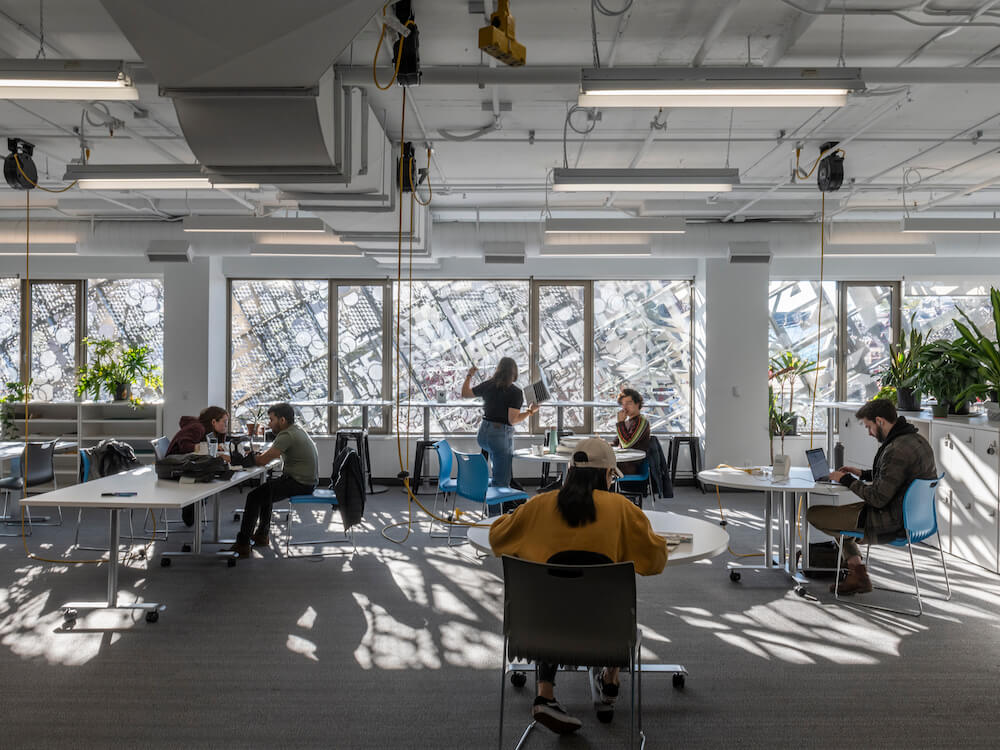 Inside, Bortolotto has refashioned the humble structure into a more breathable, functional and student-centric environment. The open and light-filled spaces are complemented by new mechanical systems, with an efficient, insulated facade behind the metal scrim. 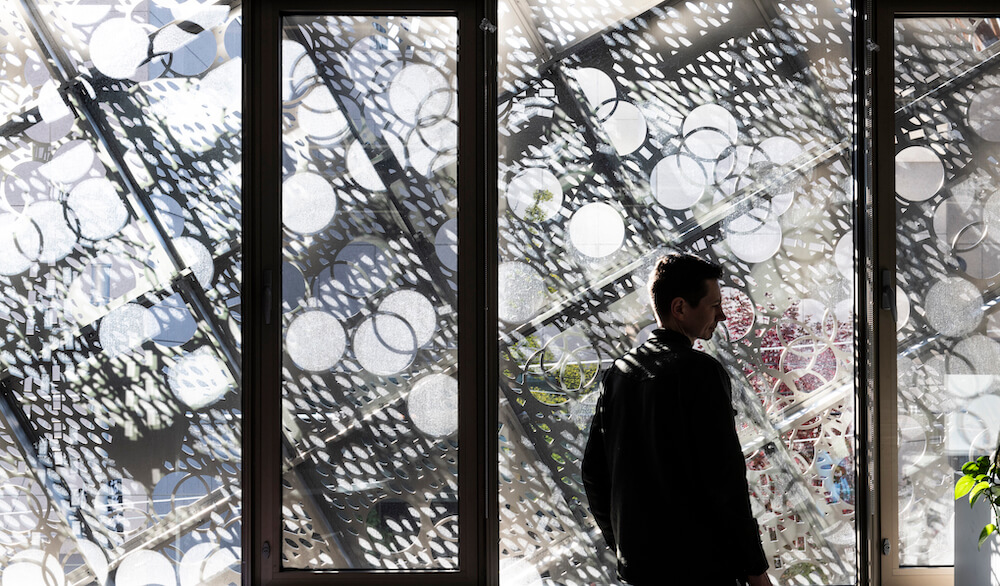 Formerly occupied by administrative offices above and open studios below, the building — now home to OCAD’s Experiential Learning Centre — combines hands-on education with a sociable ambiance, while also integrating the school’s Centre for Emerging Artists and Designers (CEAD) on the uppermost floor.

While the bones of its predecessor remain, the Rosalie Sharp Pavilion has been renovated into a public symbol for the urban institution. A university without a traditional quad-style campus, OCAD’s identity is instead inscribed into — and out of — the fabric of the city itself. 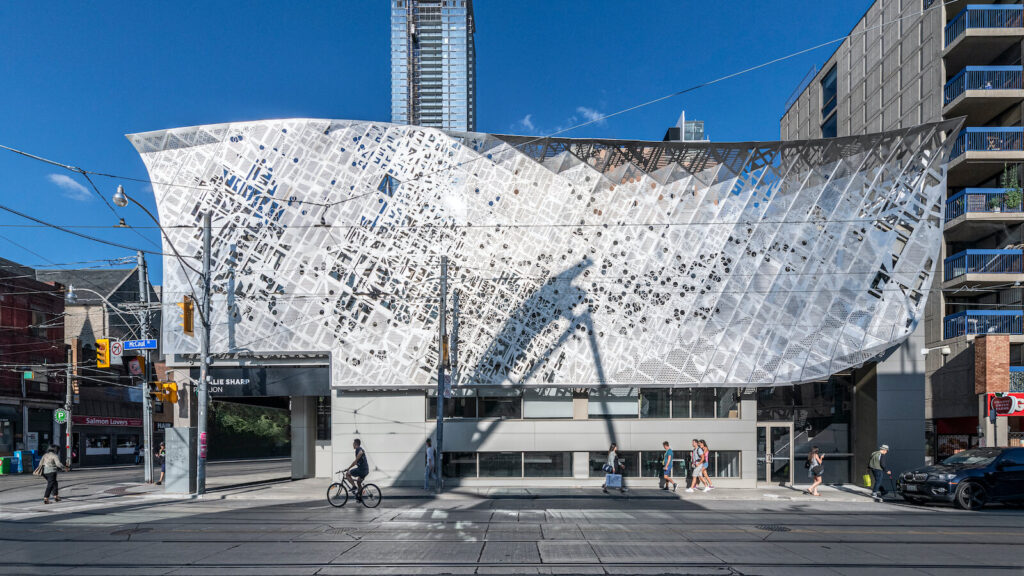 The new retrofit is also largely indicative of the process of building in Toronto. Initially proposed with a more opulent aluminum scrim – dramatically backlit by LEDs – that peeled away at the southwest corner to reveal a sleek glazed facade displaying student artwork, the ambitious early plans were eventually scaled down in favour of a more pragmatic approach. (From condominiums to cultural hubs, it happens here a lot). 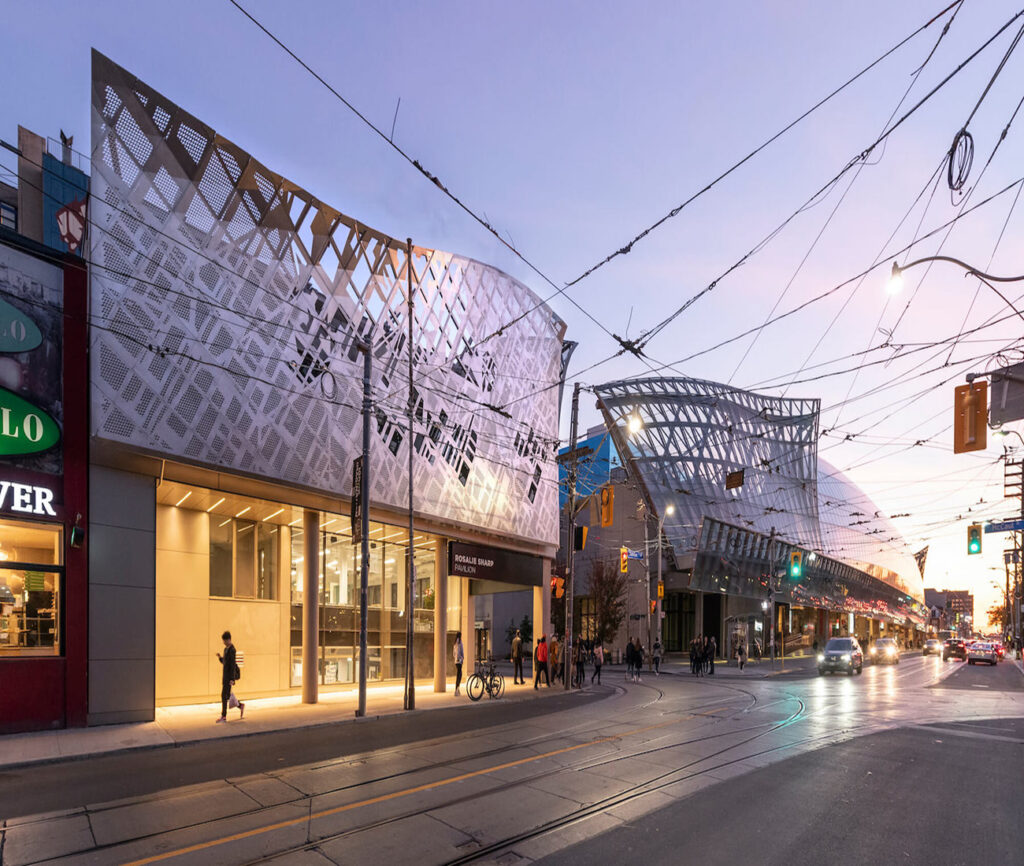 It struck me as a disappointment at first: The building now reads as a transformative work of adaptive reuse, but its modesty is part of its grace. A rawness remains, with the pared-down pavilion at home among the eclectic storefronts and streetcar tracks that surround it. The scrim gestures west to Gehry’s gallery while the preserved building behind it blends in with the pizza shop and shawarma joint to its east. It’s a messy contextual richness that’s elegantly reflected in Alex Fradkin’s architectural photography, which weaves Bortolotto’s design into the everyday life of the city, streetcar wires and all. BORTOLOTTO.COM

Adapted from a feature originally published by Azure.