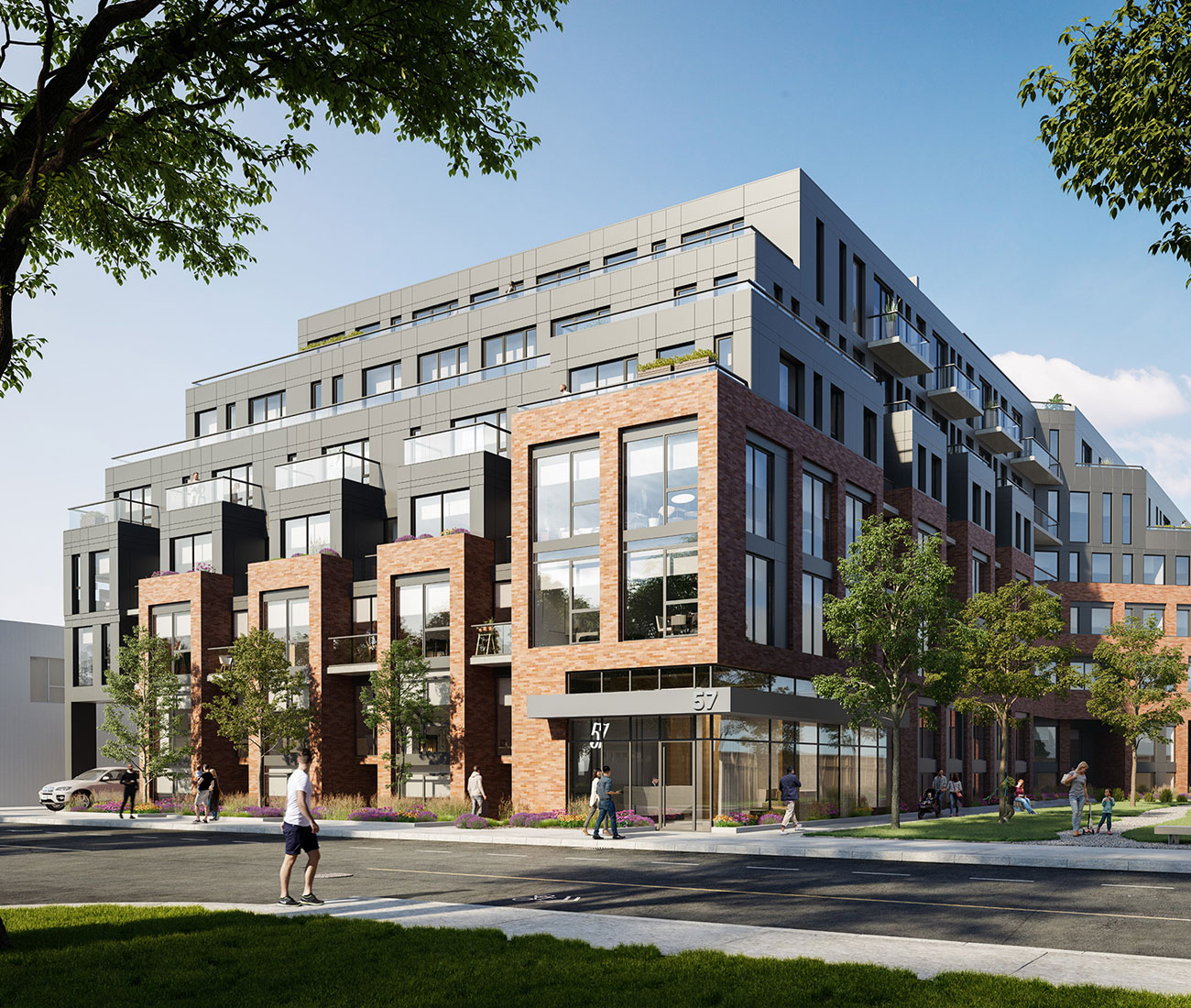 From the windows of our west end office, downtown skyscrapers – and construction cranes – unfold across the horizon in dramatic peaks to frame a foreground of low-slung houses. Our city leads the continent in high-rise residential construction, and it shows. Yet, as towers transform Toronto, two disparate extremes of soaring condos and single-family dwellings begin to characterize the city. Enter the residential mid-rise.

There’s a sense of variety – and adventure – among the designs, ranging from the deft street-level articulation at Oben Flats Castlefield (which picks up on the rhythm of its surroundings), to the daring individuality of Teeple Architect’s Annex design, and the pioneering timber frame construction of Scoop Condos on St. Clair Avenue West. Diverse material palettes accentuate the designs, lending a sense of texture, grain, and colour to the streetscape. In a city of repeating blue-glass condo towers, this is a breath of fresh air. Introducing the best of Toronto’s new middle ground. 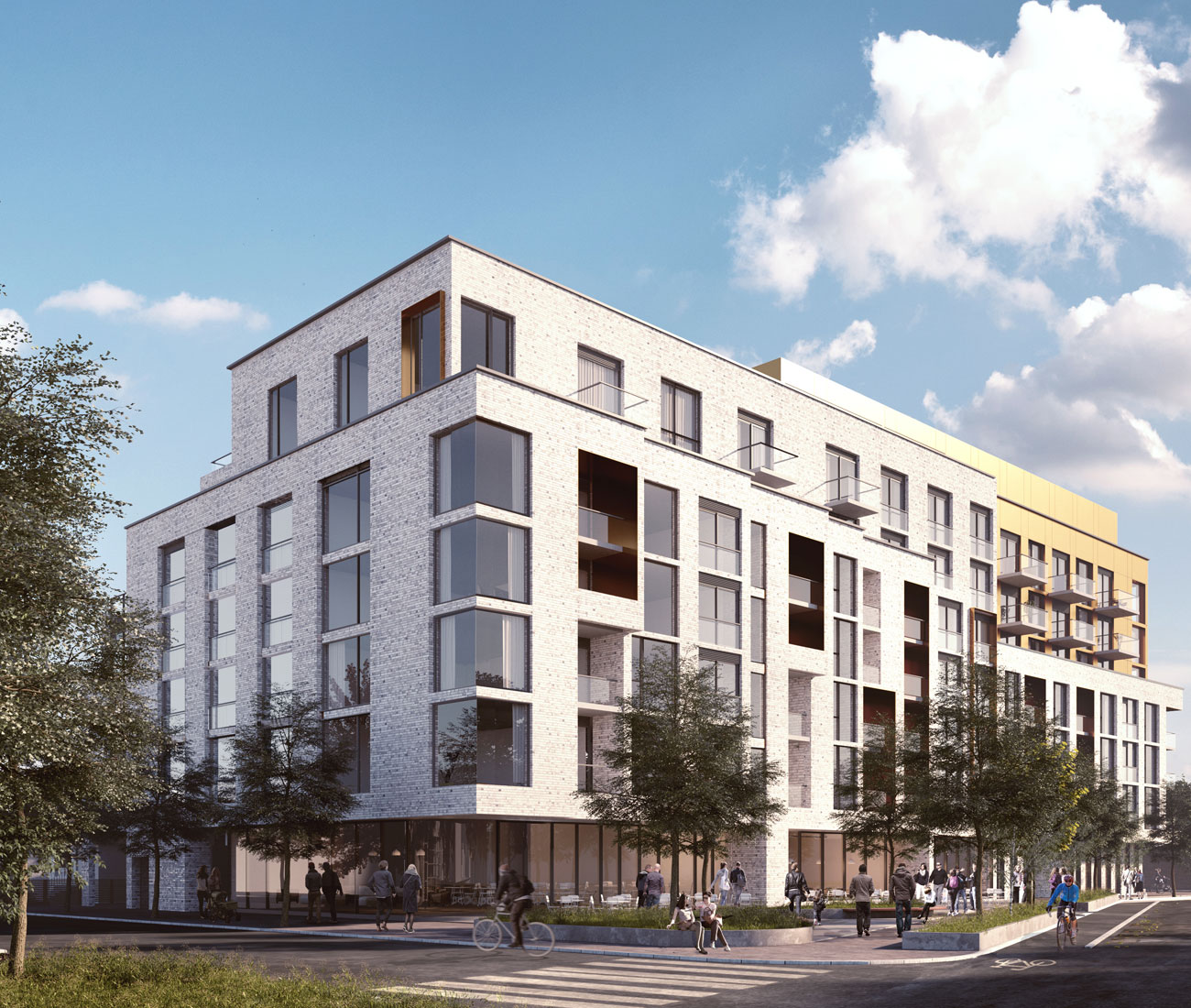 From the street: Planting roots here couldn’t be easier, with DL-listed furniture showrooms on every corner, not to mention, the nearby Caledonia Crosstown and GO stations nearing completion. West of Caledonia Road, the leafy York Beltline Trail is a jogger’s dream.

Moving in: Developer Oben Flats is behind several local mid-rise flats and towns, designed in collaboration with Superkül architects. Together, they’ve hit on a winning rental formula. At eight storeys, this project brings gentle density to the Castlefield neighbourhood. Sensitive to the area’s mixed residential and commercial context, the two-toned building doesn’t loom over the streetscape, but steps back – creating generous terraces on the upper floors and much needed green space below. At grade, Oben offers retail and other services to the community, while inside, residents have views of the scaled residential neighbourhood to the north and a sunlit perspective on Eglinton Avenue to the south. 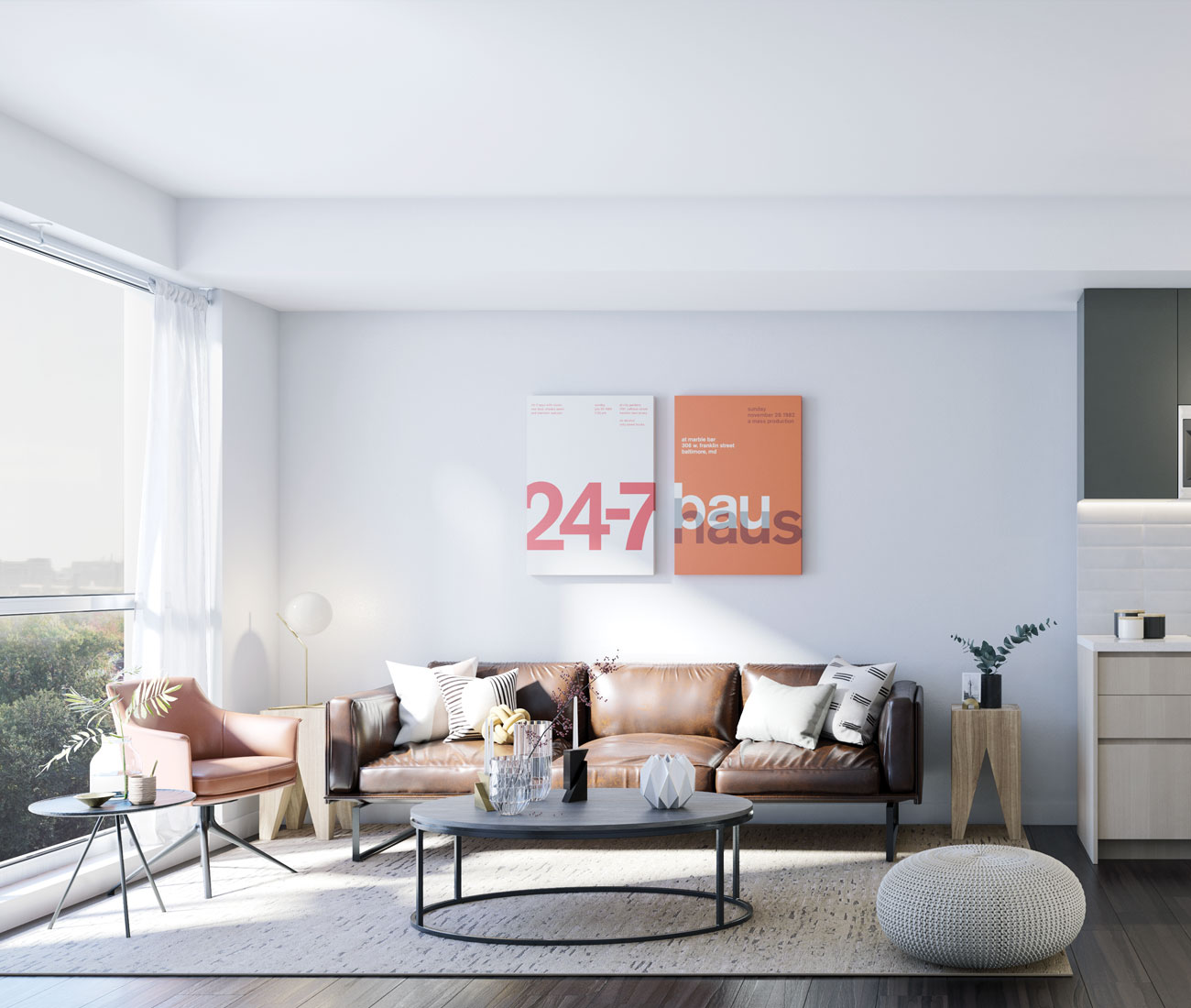 From the street: Nestled in family-friendly Leslieville, just north of the emerging Port Lands, the Studio District is a hotspot for film production and brunch vibes. Rub shoulders with industry talents at Boxcar Social or Bonjour Brioche on Queen, where frequent streetcars whisk you downtown or to The Beaches in minutes.

Moving in: Designed by Diamond Schmitt Architects and developed by Graywood and Alterra, these condos, lofts and towns in the former Weston Bread Factory strike a balance between heritage and contemporary typologies. Rather than default to glass-encased retail spaces, for example, the architects continued the building’s original masonry down to the sidewalk. Interior designers TACT Design struck the same balance inside. Think four to five-metre-tall ceilings (in a handful of hard lofts) with exposed I-beams and ductwork conversing with du-jour black finishes and industrial lighting. There’s also a choice between engineered wood floors or concrete-like tile flooring for an added industrial edge. 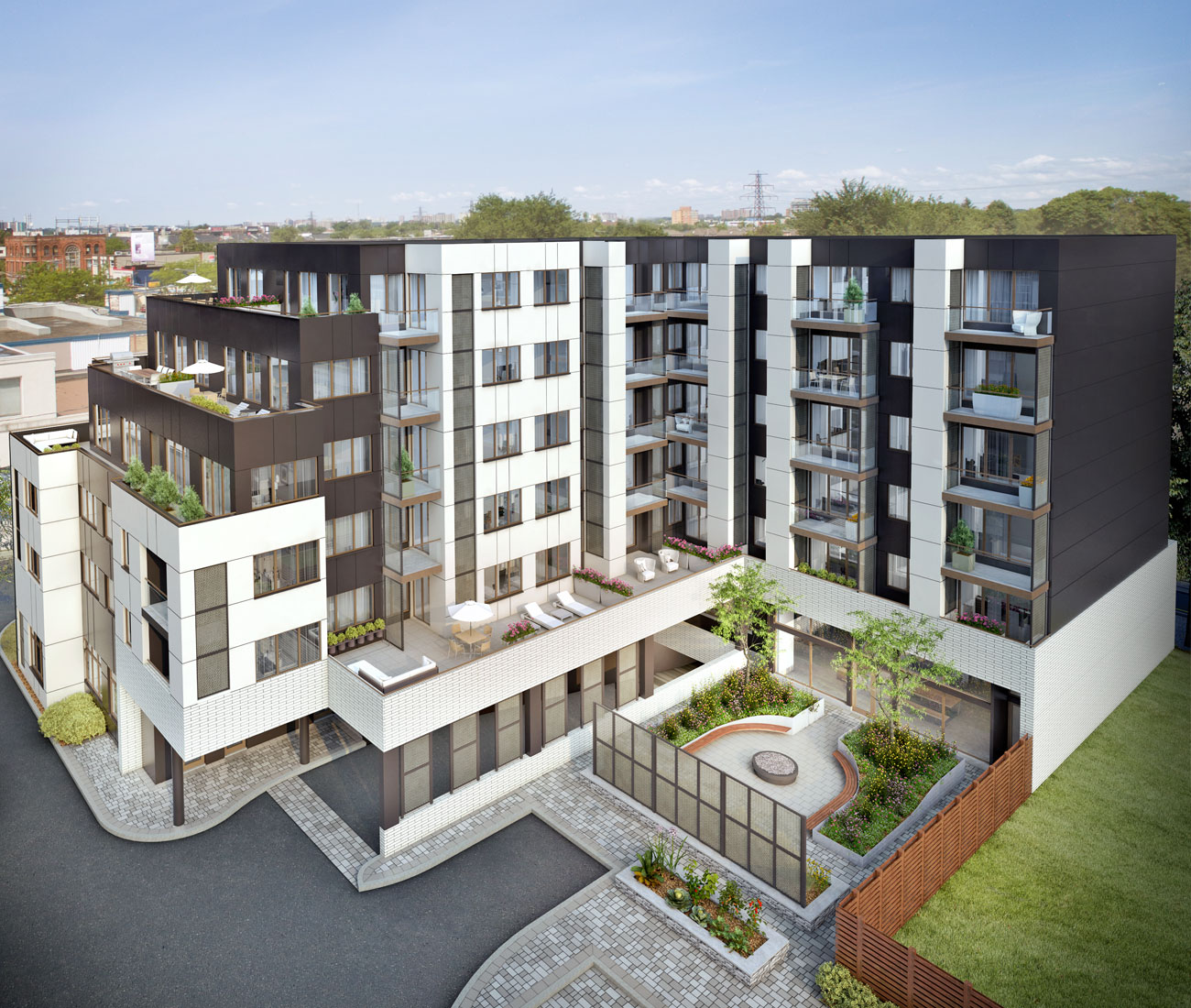 From the street: Carleton Village sits at the intersection of Old Weston Road and St. Clair Avenue West, within minutes of the Toronto Weston Flea Market and Stock Yards Village shopping centre. Besides these eclectic retail options, there is also a elementary school, library, and public park to seal the deal. Oh, and a bingo hall. (But you didn’t hear that from us).

Moving in: SMV Architects created an alternating rectangular pattern that gives this Graywood Developments a modern feel, with a human-scale courtyard accessible to residents from an on-site library. As with books, it’s what’s inside that counts: Scoop is one of the first mid-rise condos in the city to use timber-frame construction. That makes this mid rise condo carbon neutral; with a lower energy rating compared to steel or concrete builds. Adding to its sustainable roots, residents of the open-concept units by TACT Design can also enjoy the communal garden onsite. 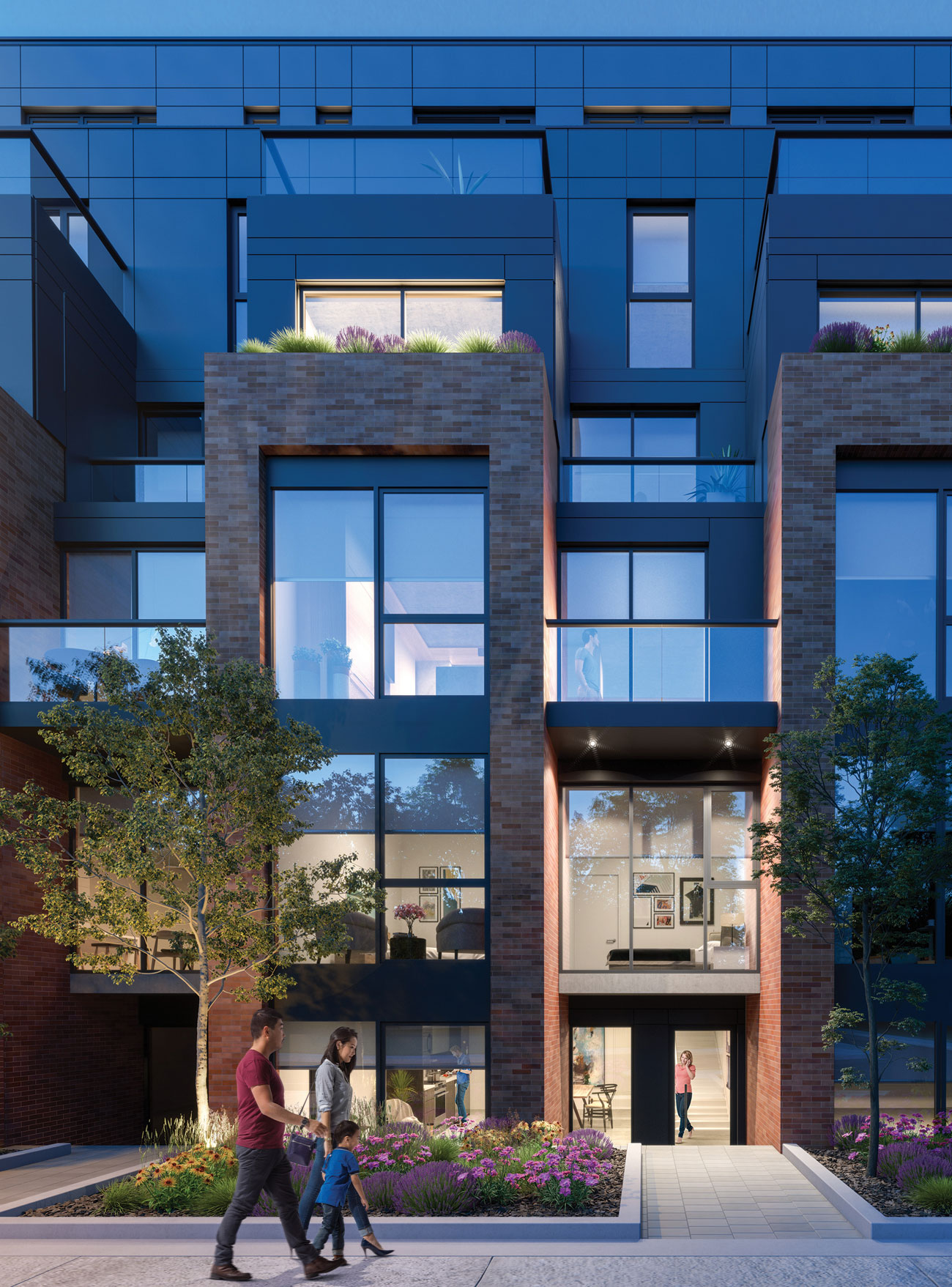 From the street: Queen West hardly needs an introduction, but there’s a particular Beer Store in Parkdale you may have overlooked. Surrounded by bay-and-gable Victorian homes and mature trees, this site is as idyllic as it gets. And, yes, it’s also minutes away from the city’s trendiest hotels, bars and restaurants.

Moving in: For RAW Design, reflecting the character of the neighbourhood meant embracing its quirky Victorian undercurrents. And so, 57 Brock’s final draft features sporadically placed windows and large cantilevered oblique frames – projecting, notably, above an angled two-level amenity terrace. The brick-clad building is a mix of town homes, condos and double-storey units (perched on the topmost floors), with interiors by Tomas Pearce offered in three distinct colour schemes – from pale Scandinavian to rich wood tones. And, right next door, neighbours will have a small municipal park for gatherings. 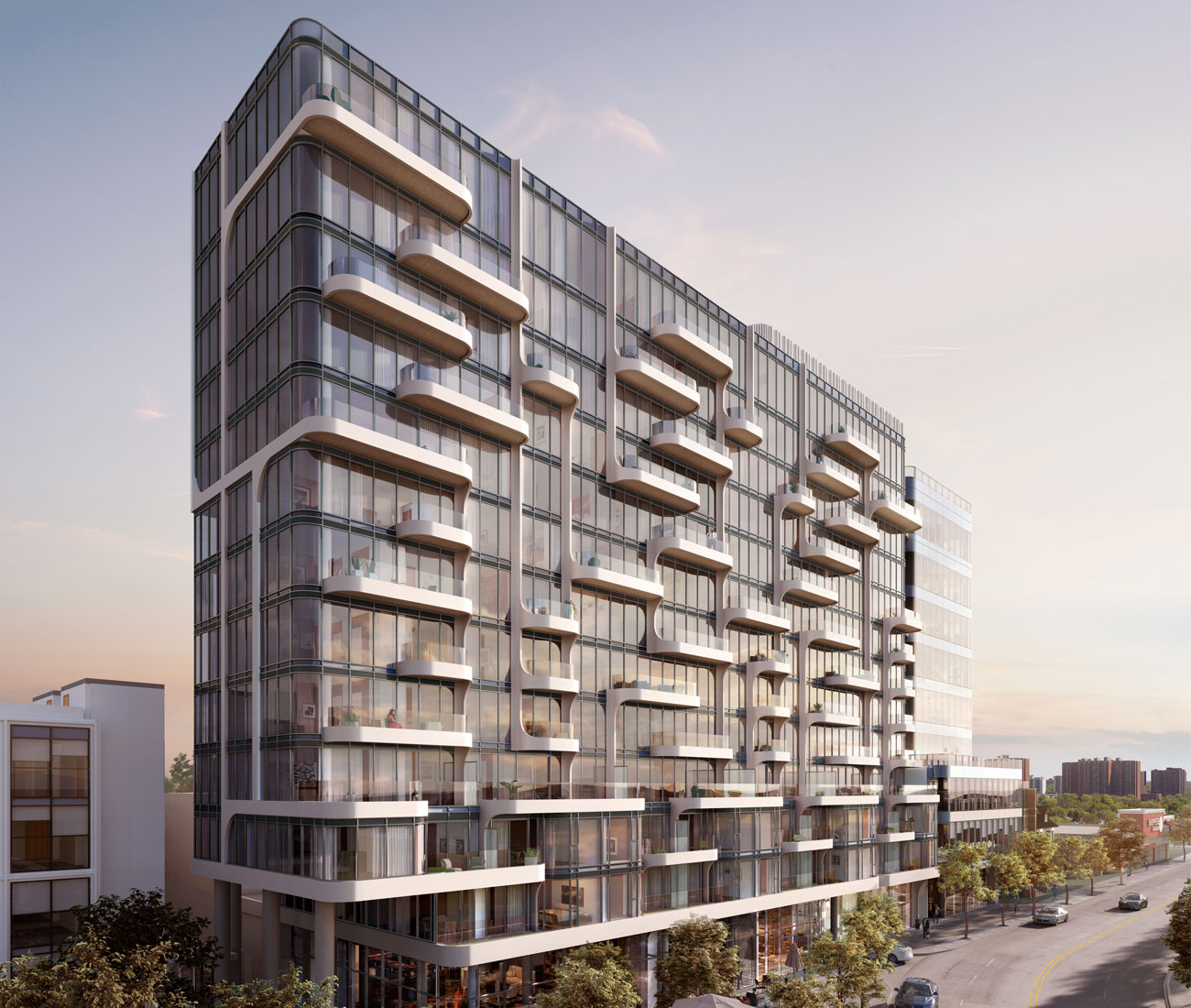 From the street: Dupont is a humming thoroughfare on the northern edge of The Annex composed of restaurants and hardware supply stores. Grab a bagel at Schmaltz Appetizing, ramble through Casa Loma, or take the subway – Dupont Station is right next door – to U of T’s campus.

Moving in: Teeple Architects’ mixed-use condo at Kendal and Walmer has a rounded glass envelope that sets it apart from the regal Victorian homes to the south. At 13-stories, however, it retains a necessary human scale. Curved white lines travel up the facade, connecting with wave-like balconies that seem to hover in thin air. In the lobby and common areas, interior designer Johnson Chou tempers natural marble surfaces with minimalist, sculptural forms that hint at what’s to come in the suites. Generous two and three bedroom units abound here, which should appeal to students and families alike. For the city: ANX adds one floor each of retail and artists’ spaces, as well as eight stories dedicated to office environments.