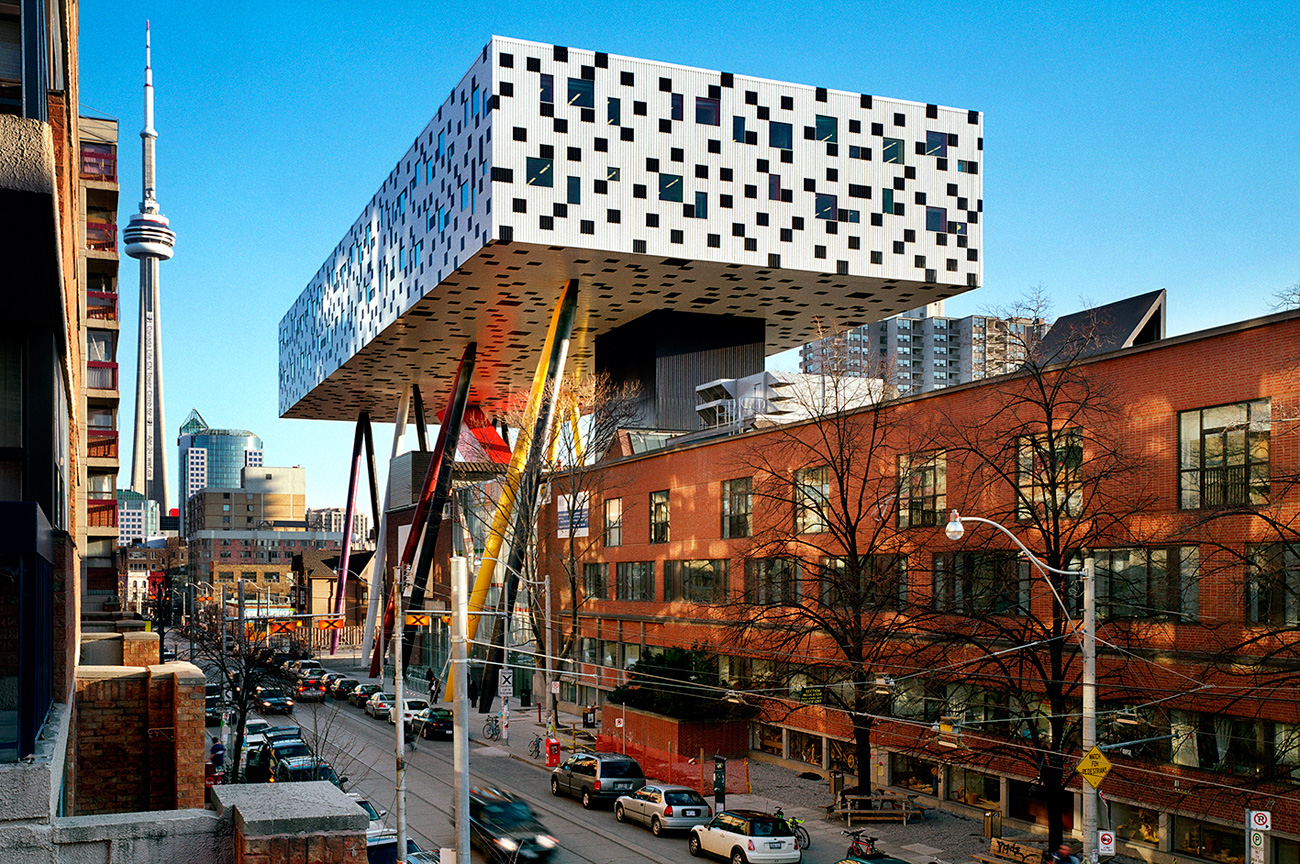 The architect reflects on OCAD University’s iconic downtown building, which helped Toronto usher in a new era of bold architecture

Speaking at a public lecture held on November 25 to celebrate the tenth anniversary of the Sharp Centre for Design, British architect Will Alsop made his outlandish flying-box-on-legs sound surprisingly practical.

To hear Alsop tell it, Village by the Grange residents who were worried about their patio sight lines prevented him from designing a typical tower, while students’ requests for a public space led him to avoid designing a structure on the lot south of OCAD U’s existing building. The solution: a floating podium, with its base at roof level with the residential building across the street, suspended above the school’s older building and cantilevered out over a new student hangout spot dubbed Butterfield Park. Impressively, construction was completed in only 18 months. 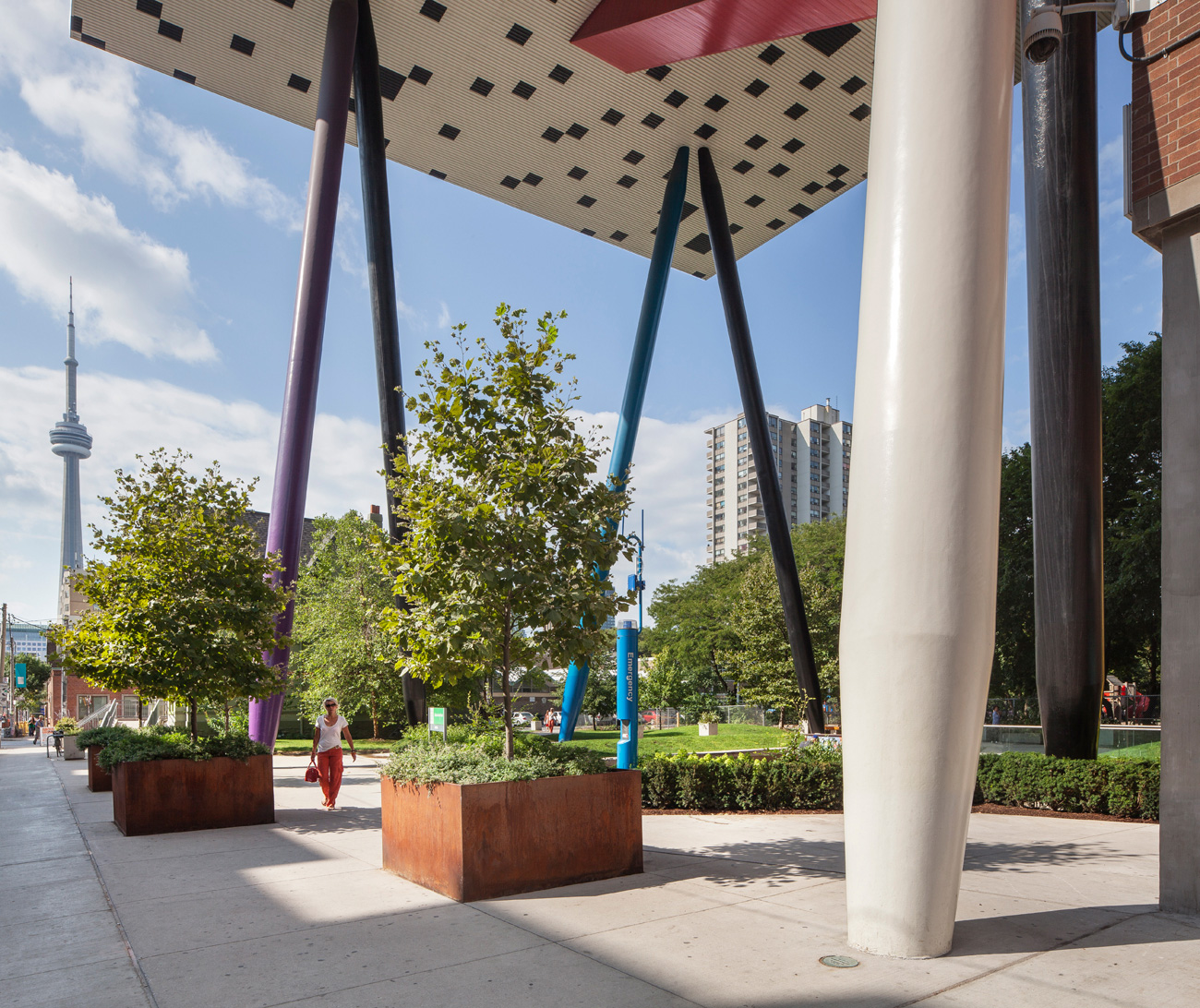 Alsop’s unconventional building design went on to win accolades (including a 2005 Award of Excellence from the Toronto Architecture and Urban Design Awards) and became a powerful marketing tool for OCAD U. Unveiled in 2011, Bruce Mau’s box-y graphic identity for the school takes inspiration from the checkerboard cladding Alsop devised. “Everywhere I go in the world, they might know nothing else I’ve done, but they know this building,” the architect told the packed auditorium who came out to hear him in conversation with Toronto Star critic Christopher Hume. During the talk, Alsop discussed the Sharp Centre’s origins, development and influence. Below, his seven best comments.

1 On his first visit to Toronto…
“I saw City Hall, and Mies [van der Rohe’s Toronto-Dominion Centre towers], but I didn’t see much else. Now, there are more interesting buildings. If I was coming here in 2015, I’d feel differently.”
Among the interesting projects under construction: two Alsop-designed subway stations: Finch West and Pioneer Village.

2 On OCAD U’s original project brief…
“It was not aspirational at all. It was written as though it was for a hospital. It was a mind-stultifying read.”
Mid-way through his initial interview with the project’s selection committee, Alsop asked the group if any of them had actually read the Sharp Centre design brief. Only one person raised his hand – “the guy who had written it,” Alsop said. The architect proceeded to tear up the brief.

3 On his own ambitions for the building…
“I wanted a rough, tough building – not too precious. I wanted to do something that allowed you to throw a bucket of paint around if you wanted to.”
Alsop pointed to his table top’s extra-wide window sills – which he’s seen budding artists use for impromptu naps – as an example of a space in the school that students have made their own. 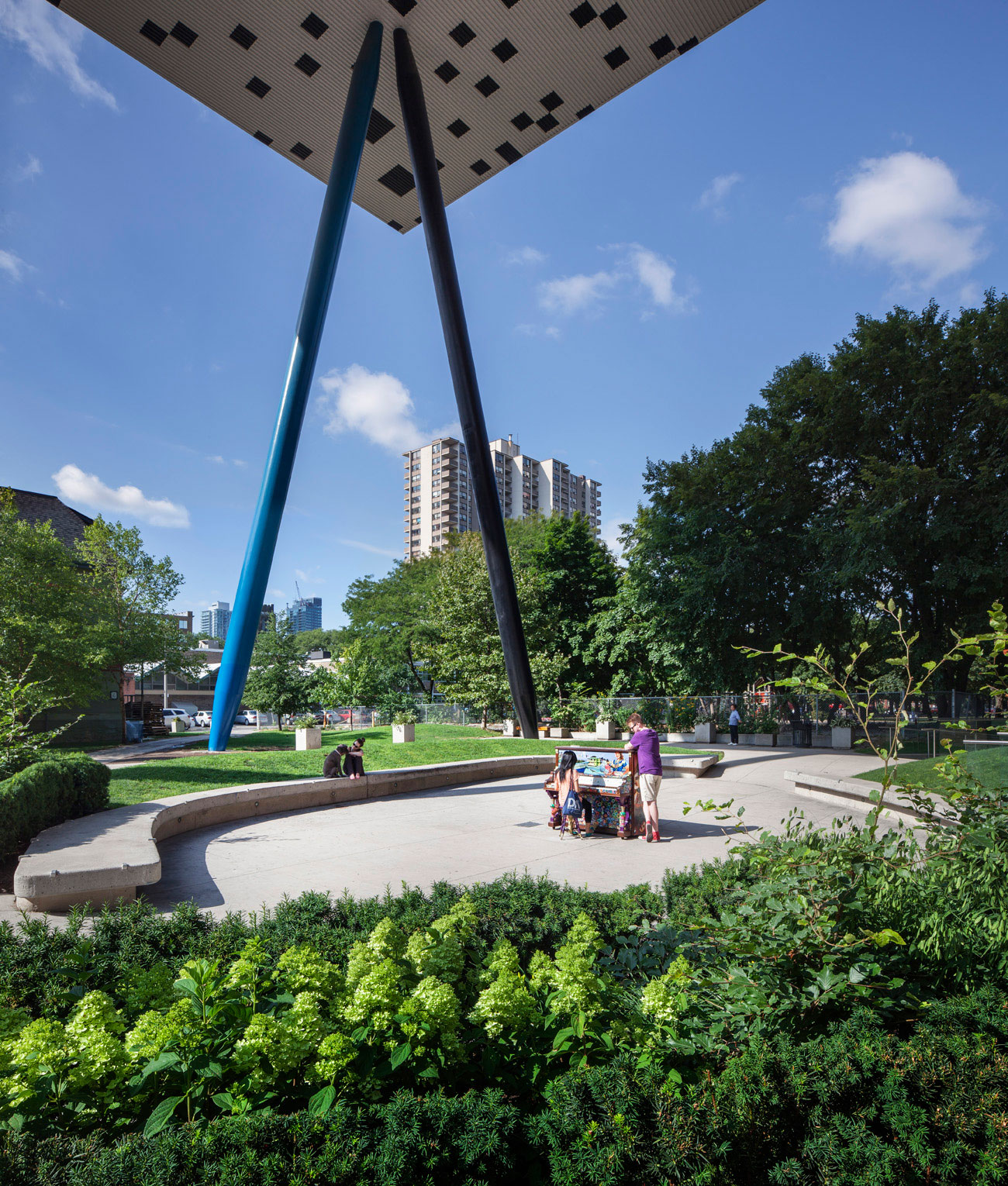 4 On the building’s construction process…
“It was quite a production to see.”
Alsop cited the transportation and installation of the structure’s 29-metre long legs as a great example of how construction can act as a kind of theatre. During a visit to the Hamilton factory that manufactured the legs, Greg Woods, the Sharp Centre’s Project Architect, sent Alsop a photo of the hollow, eight-tonne stilts, captioned “weapons of mass construction.”

5 On that wire fence in Grange Park…
“If it isn’t gone in 3 months, go out with wire clippers and cut it down, for God’s sake.”
Originally intended to serve as a link between McCaul Street and Grange Park, Butterfield Park (the official name of the plaza area underneath Alsop’s flying box) remains cut off from its neighbour thanks to a wire fence that the AGO – which owns Grange Park – has yet to remove. An audience member assured Alsop that the fence is finally set to be taken down – renderings of plans for a revitalized Grange Park sans wire fence can be seen in this PDF from the AGO.

6 On OCAD U’s older campus building…
“It’s not a great building, but it’s there. It’s part of their narrative. It leaves a trace of history.”
Alsop said that, over the course of his career, he’s come to be against knocking old buildings down. He sympathizes with the fact that familiarity can make people romanticize otherwise-ugly structures.

7 On what he would do differently if he were to design the Sharp Centre now…
“Less walls.”

To recognize the impact that the building has had in its first decade, OCAD University’s Anniversary Gallery is currently displaying a selection of early design sketches, plans and models alongside photos and artwork that pay tribute to the campus addition. Curated by Janna Eggebeen, the show is divided into three sections, each dedicated to one of the Sharp Centre’s defining characteristics: its playfulness, its technically innovative structure, and its graphic pattern.

Works include a costume designed by Rob Shostak that reimagines the building’s legs as Doctor Octopus-like tentacles attached to a checkered oxford shirt, and a LEGO model made by mixed media artist Greg McRoberts. Also on view: a time-lapse video by Terri Meyer Boake, which recaps the dramatic construction process Alsop spoke about in his lecture. Open to the public during school hours (7:30 – 12:00 Monday through Friday, 9:00 – 6:00 on Saturday and 12:00 – 12:00 on Sunday), 10: Sharp Centre for Design Anniversary Exhibition runs until April 9, 2015.