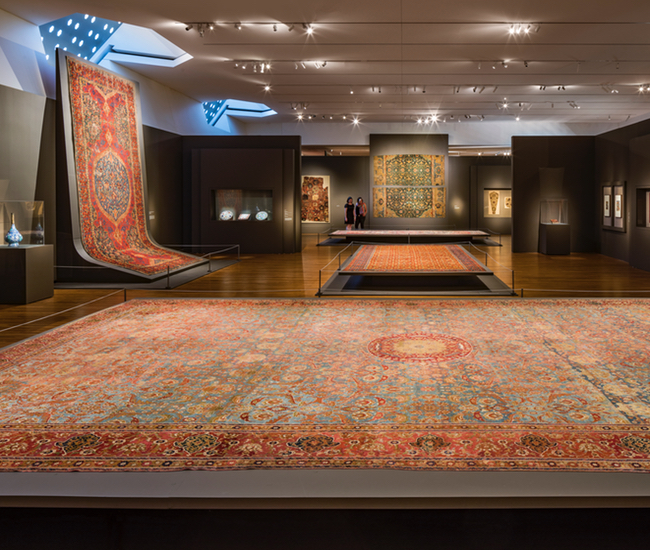 Arts of the East, selected from one of the most important collections of Islamic art in the world, explores how art connected cultures, geographic regions and eras.

The world’s greatest Islamic art often makes a pit stop in North York. That, of course, should come as no surprise: Since its opening in 2014, the Aga Khan Museum has become one of the city’s premier cultural destinations, housing collections that celebrate Islamic art’s complexity, diversity and ongoing history. The museum’s mandate is to provide new perspectives on Islamic civilizations, and with Arts of the East, it does just that.

Selected from Italy’s renowned Bruschettini Collection – one of the most important private collections of Islamic art in the world – Arts of the East collects 43 masterworks from the Ilkanids, the Mamluks, Safavid Iran, the Ottoman Empire and Mughal India. Spanning the 13th and 17th centuries, the exhibition showcases some seriously gorgeous objects: from tapestries to metalwork to ceramics to paintings, it’s as vibrant as it is varied. But beauty isn’t the only goal, here.

Rather, the world-exclusive exhibit, curated by Dr. Filiz Çakır Phillip, explores how art connected cultures, geographic regions and eras. The collection gallops between Spain, China, Egypt, Iran and the Caucasus – but for us, it’s only a TTC ride away. With so many masterworks on offer, we asked Dr. Çakır Phillip to guide us through some of the best pieces on display in Arts of the East. 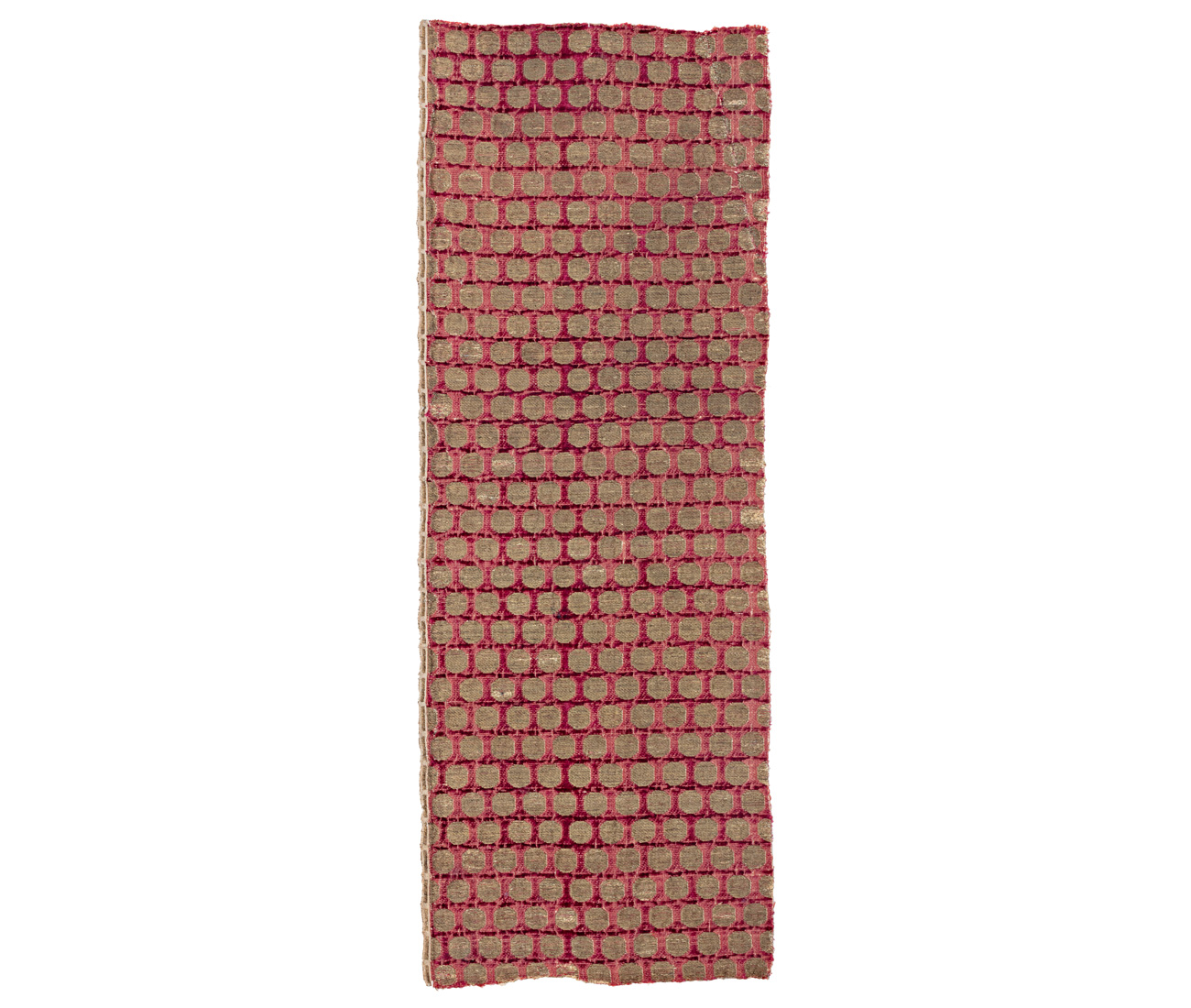 Many museums own silk polka-dotted textiles similar to this velvet panel. But while many are registered as Italian in origin, the Vatican’s archives show that popes were gifted such silks – and that panni tararici, or “Tartar Cloths,” originally hail from northern Iran. “These clues reveal the connection between Iranian and Italian weavers, and show how a pattern traveled across time and geography,” says Dr. Çakır Phillip. “This textile dates from the late 1200s, and by 1300, the technique and patterns of silk weaving had spread to the Italian cities of Luca, Venice and Genoa – the latter city the home of the Bruschettini Foundation.” 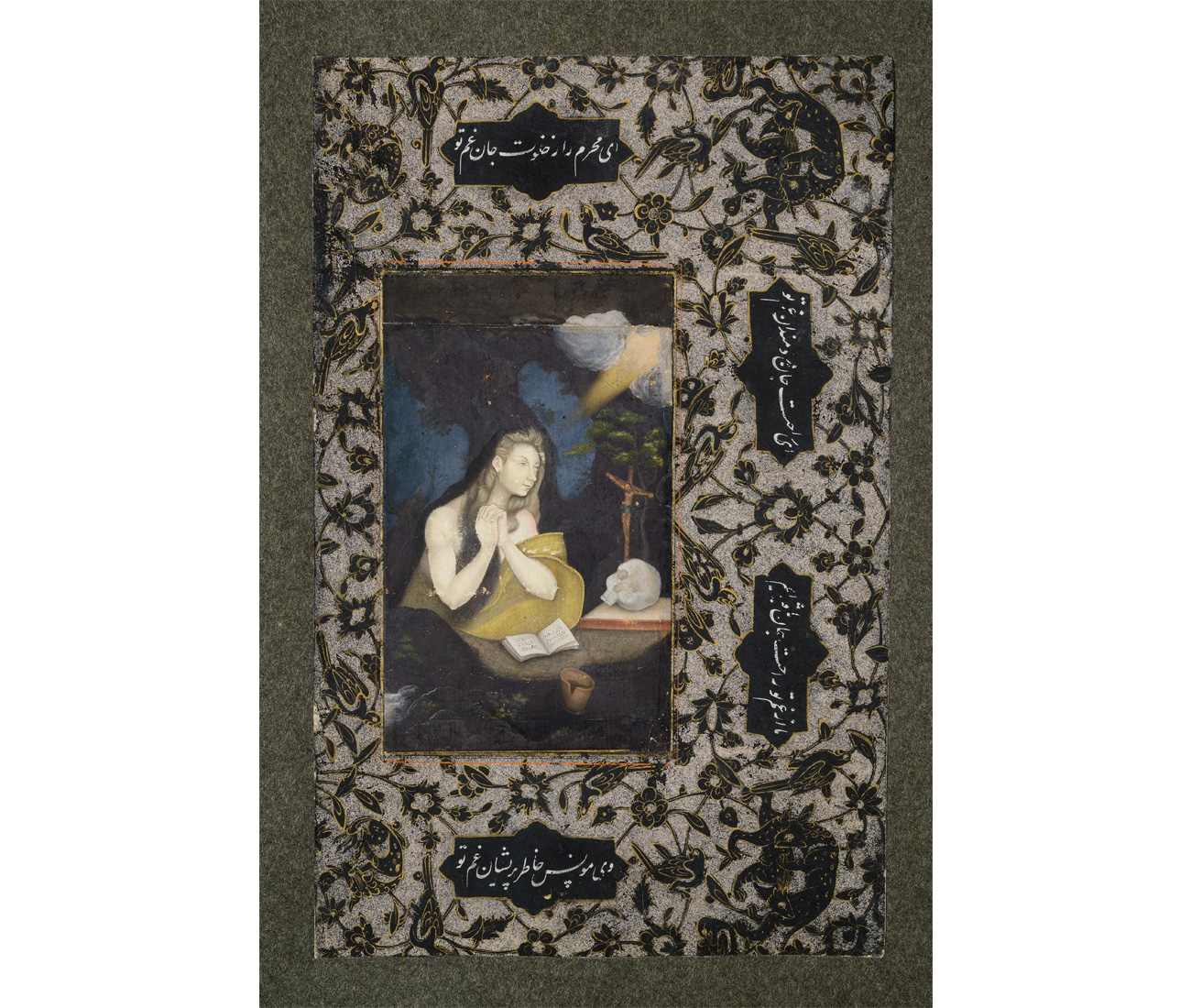 European art, acquired through trade and travel, also became a source of inspiration to Islamic art. Take, for example, this 17th-century piece developed by a Mughal painter: It’s based on an etching by Flemish artist Raphael Sadeler the Elder, which itself was based on a painting by Venetian artisan Domenico Tintoretto. Dr. Çakır Phillip notes that the Mughal artist uses chiaroscuro, or the dramatic use of light and shadow, to depict Mary – proof that European influences travelled as far as Mughal India. 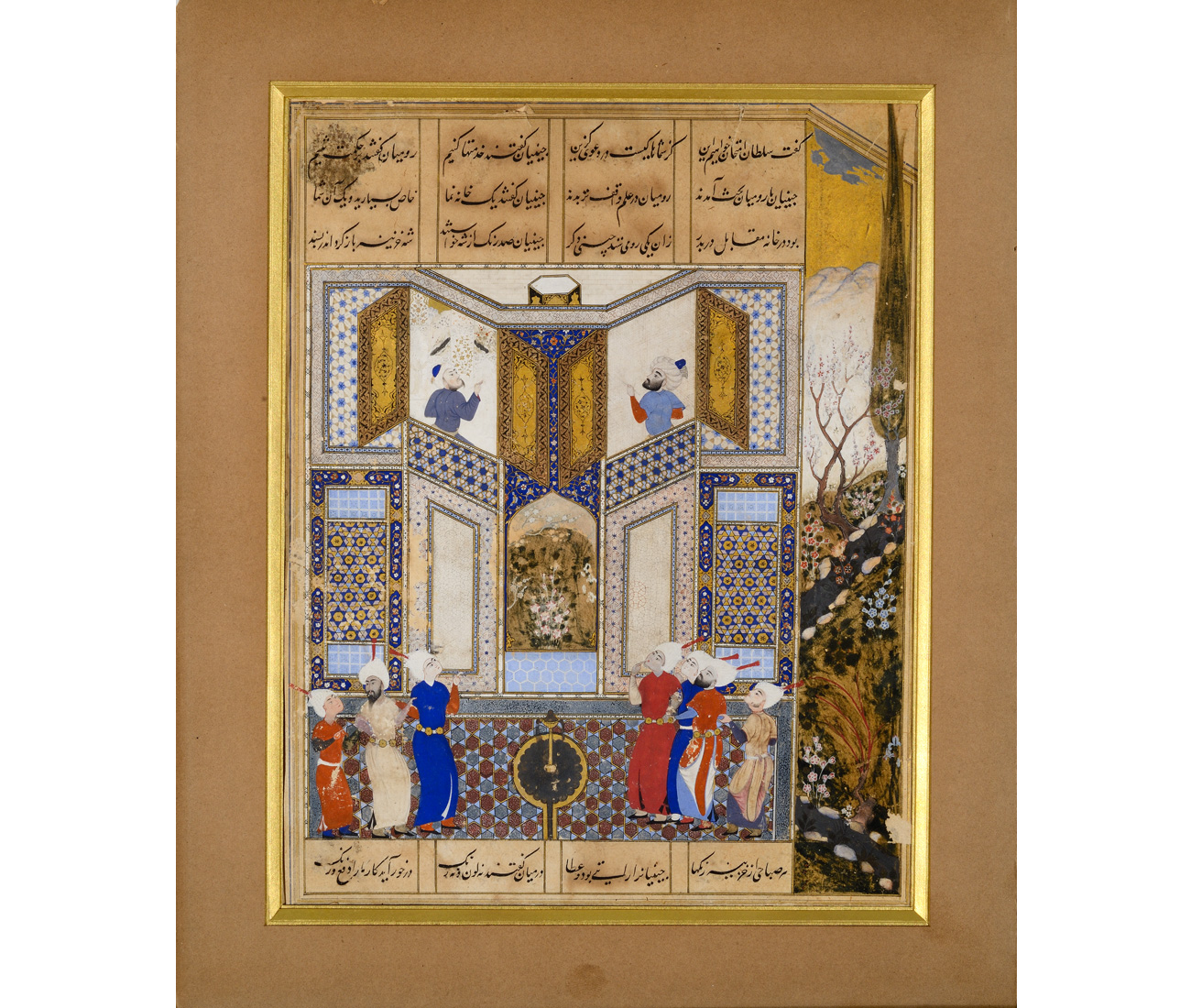 Cultural exchange was evident in the poetry of the era, too. Greek and Chinese Painter Competition, made in the mid-16th century, depicts the tale told in a poem called Masnavi-i Ma‘navi, by Rumi, in which two artists – one Chinese, one Greek – are tasked with accurately recreating a room’s interior. The Chinese painter requests more paint; the Greek painter requests none. Why? Because he polishes the room’s surroundings until they’re reflective, creating the most striking rendering of them all. This folio captures the competition in splendid detail, right down the intricate tilework depicted. 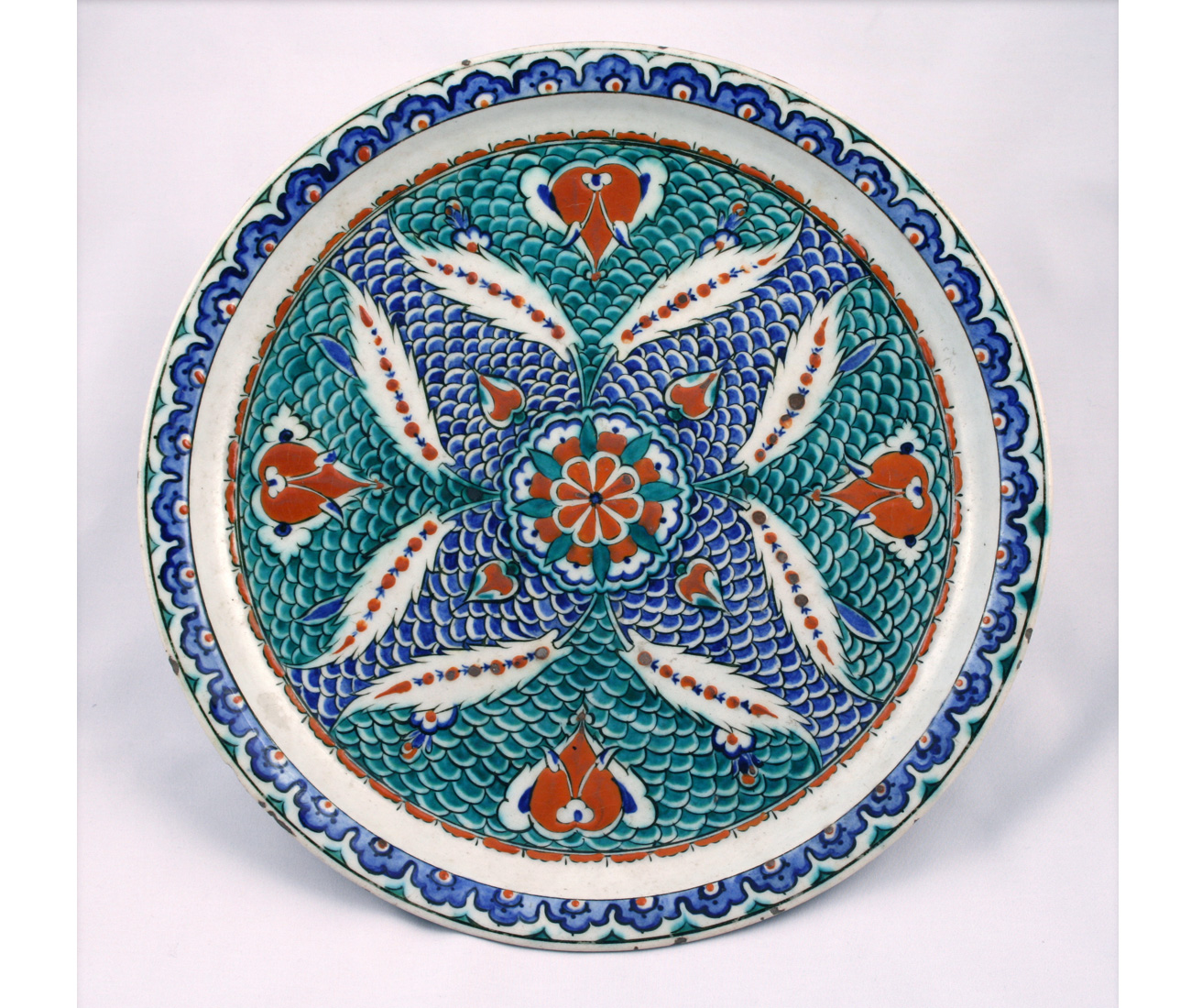 This dish, with its brightly coloured scale pattern and serrated leaves, is breathtaking. But the 16th-century ceramic piece, from Iznik, Turkey, showcases a dazzling array of influences: The scales may either be referencing the Ming Dynasty’s porcelain, which was beloved by the Ottoman court, or tin-glazed Italian Majolica that the Ottoman Empire acquired through trade. The serrated leaves on this dish, meanwhile, are associated with painter Shah Qulu, an Iranian emigré whose aesthetic would eventually define Ottoman style. 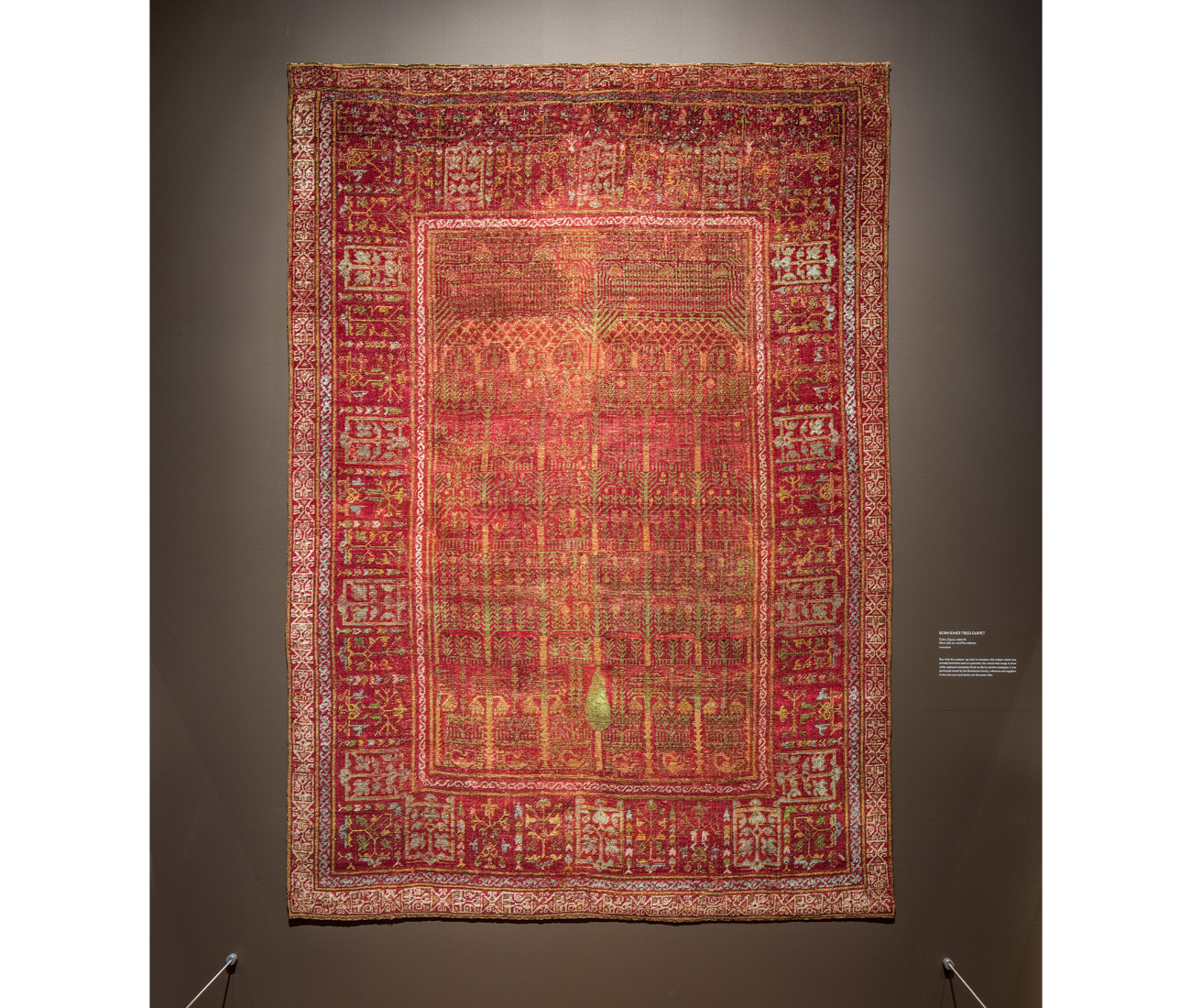 Collector Alessandro Bruschettini, says Dr. Çakır Phillip, has a “special eye” for works with fantastic origins, the kind of stuff that’d send us down a Wikipedia spiral. Take the Bernheimer Trees Carpet, for example. “The term ‘Bernheimer’ in the title of this 15th-century Mamluk carpet refers to its provenance – it was owned by the Bernheimer family,” she says. “Their reputation as collectors – and suppliers to European nobility – was established in the late 19th century by Lehmann Bernheimer, who designed the Bernheimer Palace in Munich.” Want to go down that Wikipedia spiral? Be our guest.

This content was created by Designlines on behalf of the Aga Khan Museum.