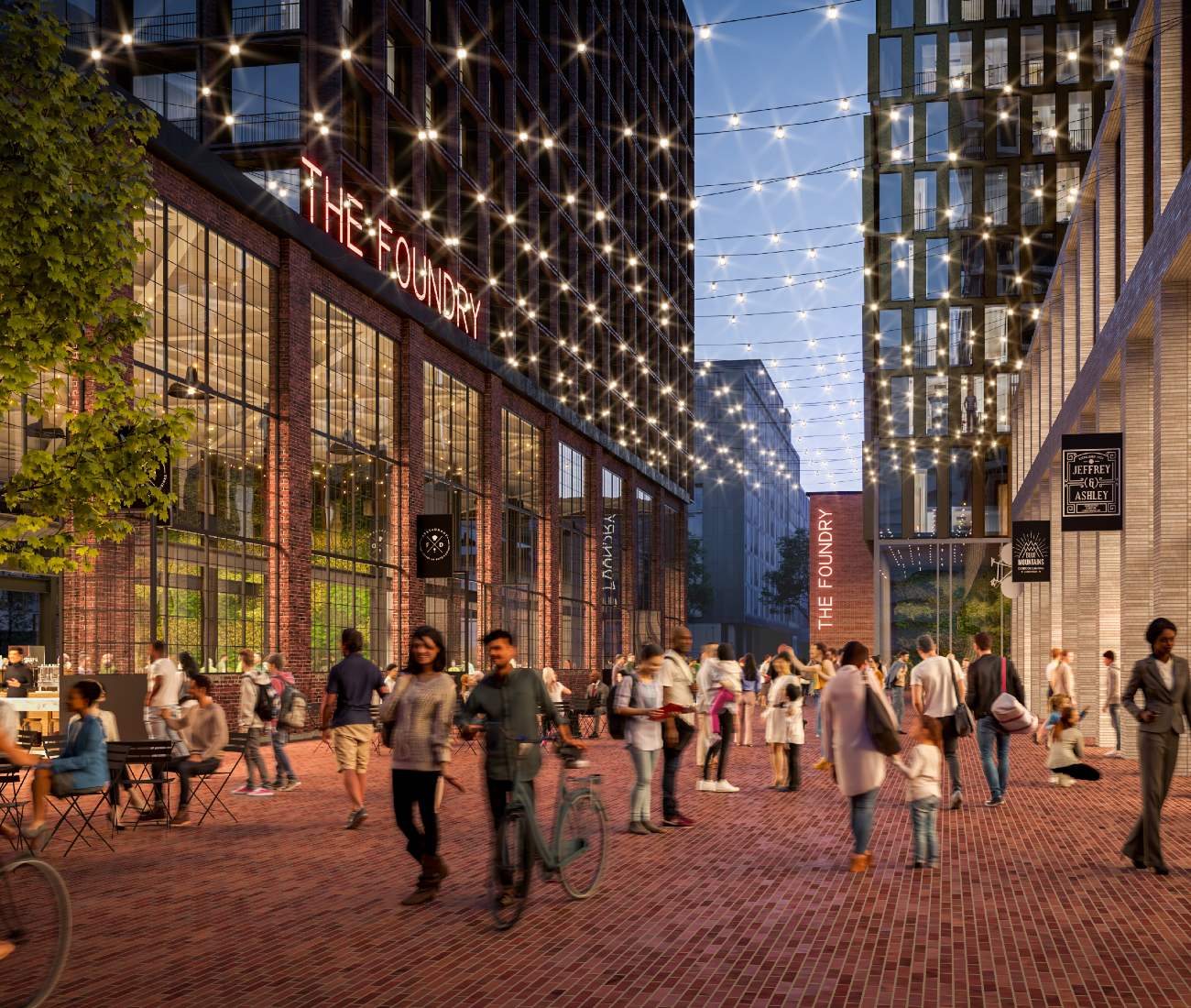 First came the bulldozers, then the public outcry. A court-ordered injunction followed, and then news of backroom land deals with undisclosed buyers. The fate of Toronto’s Dominion Foundry buildings in the West Don Lands is an ongoing saga. It’s a skirmish between activists and the provincial government, the latter of which seems bent on destroying heritage factories while citing progressive goals: We need to remediate the soil! So that we can build affordable housing!

Not so, say a growing number of community members, architects and activists who have yet to see a development plan or any consultation from the province. They’ve banded together as Friends of the Foundry to counter the official narrative – using design as a very effective communication tool – and show that preserving these outstanding factory buildings could go hand in hand with thoughtful commercial, cultural and residential development.

“It became this kind of mad charette to put something together,” says urban designer Ken Greenberg about advocating against the development. He is one of the Friends, along with KPMB’s Shirley Blumberg and Bruno Weber, DTAH architect Joe Lobko, George Brown College’s Luigi Ferrara, and housing experts Sean Gadon and Mark Guslits. At the end of this rapid-fire process, the team released a couple of renderings (by Norm Li) that were widely shared – and applauded – on Twitter. The social media response, says Greenberg, “belies the government’s insistence that communities are against development, that they’re all NIMBY, and that therefore the province has to develop this site quickly and make this pre-emptive strike to override the city.”

While the sketch is more concept than official proposal, it conclusively demonstrates the possibilities of the site. The Friends believe that if we retain the original Foundry buildings, we can create an evocative palimpsest of Toronto architecture from different eras of and a vibrant mid-rise neighbourhood with soul and character. The renderings display three residential buildings of varying heights and shapes – with 30 per cent affordable housing, more than what the province is offering – that hug the foundry buildings while keeping them proudly distinct. “We really like to preserve heritage buildings in their entirety so they’re part of the fabric,” says Blumberg. “So we spoke about cantilevering the lowest building over the machine shop and having the middle tower really close to the foundry,” or as Weber says, “snuggling up against it.” That way, Blumberg says, “You read those heritage bones separately.”

Foundry Lane, Toronto. Heritage buildings as the foundation of Placemaking. This is #Toronto at its best. https://t.co/ZpxxXJBgIv

The podium of the tall tower would be the same scale as the heritage buildings, the southwest corner would be a square, and “Foundry Lane” would run through the middle. “We had a serious discussion about whether we fill up the corner that is now “Foundry Square” [with more built area],” says Weber, who lives in the neighbourhood and designed a condo tower there as part of KPMB’s contribution to the Canary District. “But when you see the established walking routes you understand how important that space is in an area that’s already very dense. Instead, we envisioned giving it over to the public.”

It’s a compelling argument in visual form – showing how great architecture and urbanism can be achieved through engagement with the community and a transparent, open call for development proposals. But will the government listen? The Tories have dug in their heels, after all, on their contention that the factory buildings need to come down in order for the soil to be remediated for future development. This stance is clearly contradicted by projects that the architect and urbanist members of Friends of the Foundry have completed in Toronto – in the very same neighbourhood! – and around the world. No matter how this fight plays out, what is clearer than ever is that the public doesn’t view public land just as real estate to be monetized. It wants meaningful development and a say in it.

Note from the Editor: While this article only covers one proposal, there are at least two other proposals out there – all produced pro bono by passionate urban designers and architects. Thanks to Jonathan Kearns of Kearns Mancini Architects for bringing this fact to our attention.