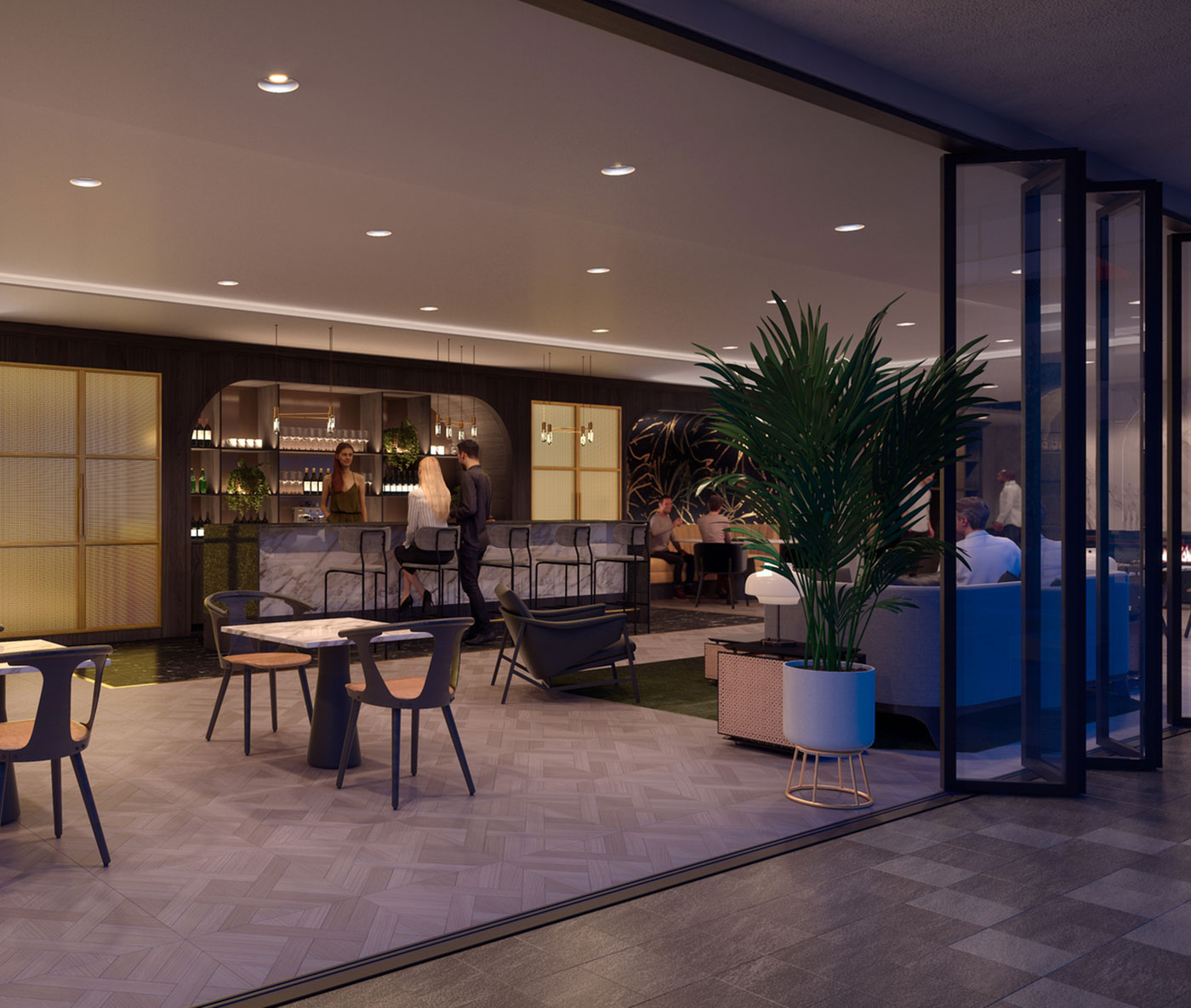 Line 5 condos, a Yonge-Eglinton project designed by IBI Group and U31, includes designated ridesharing zones, a coworking space and delivery areas for everything you’ve ordered off the Internet

If you live in a condo, you’ve probably felt the guilt. You know what we’re talking about: it happens when you order 40 pounds of cat food from Amazon. Or when your HelloFresh box arrives while you’re at work. Or when you order a crate-sized delivery of toilet paper from Costco (which, newsflash: delivers in Toronto). The guilt, of course, isn’t associated with ordering these things online – it’s that your poor, sweet concierge has to deal with your oversized purchases. Tip them nicely this holiday season.

That’s one of the problems Line 5 condos, a new Yonge-Eglinton development by Westdale and Reserve Properties, aims to solve through its intriguing amenities. Slated to rise on Broadway Avenue, a residential street tucked away from Yonge, Line’s 5’s design team – made up of architects the IBI Group and interior designers U31 – were tasked with conceiving of a building that responds to our digital-driven lifestyle: online shopping is now ubiquitous, and it’s expected to reach $29 billion in Canada by 2021. In urban centres, many are forgoing private-owned cars for ridesharing, transit and cycling. Roughly 70 per cent of Canadians occasionally work remotely. 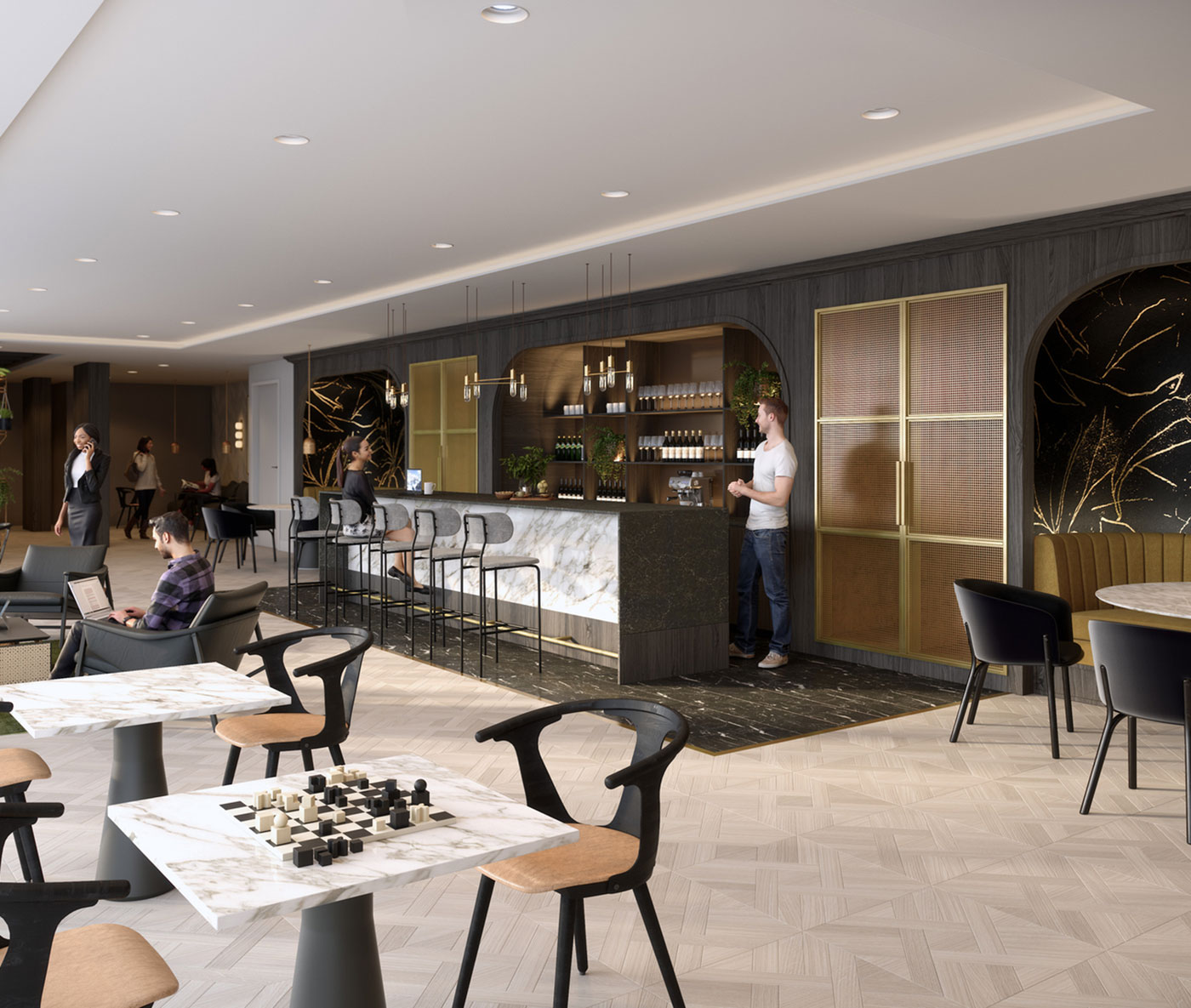 “The way we live has absolutely changed, and it drove our design,” says Mansoor Kazerouni, Global Director of Buildings at IBI Group. And he relished the opportunity to respond to those changes – and construct a building in an uber-promising neighbourhood. “There’s a very healthy demographic mix, there. Traditionally, it was known for the Young and Eligible crowd, as they called it, but it’s evolved so much.” 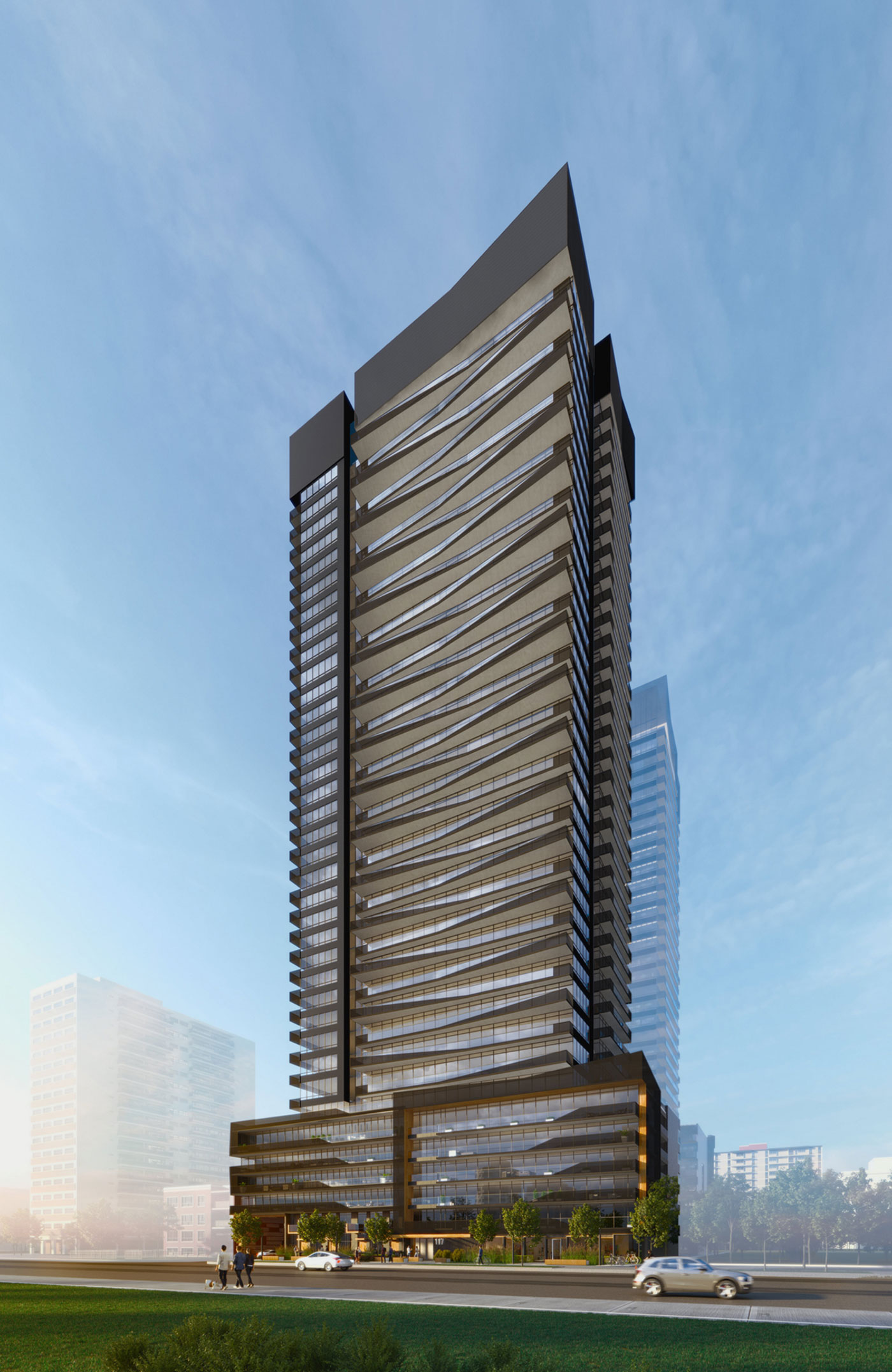 He’s right. Kazerouni hails Yonge-Eglinton’s retail, entertainment, and mixed-use features – not to mention its transit connections, including the 19-kilometre Eglinton Crosstown LRT. Density is coming to the area, but Kazerouni says that Line 5’s site is unlike its downtown comparables; the building sits on a generous-sized lot, which allowed its designers to get creative. The team responded with a H-shaped structure of two towers, rising to 33 and 36 stories respectively, rising from a chiselled podium wrapped in wood and perforated charcoal metal. As the towers reach skywards, zigzagging balconies create a basket-weave like formation, giving Line 5 condos a sense of movement.

“We’ve given the building dynamic lines and sharp angles, and there are these really skewed forms that give it this sculptural quality,” says Kazerouni. “We tried to capture the dynamism of the neighbourhood.” 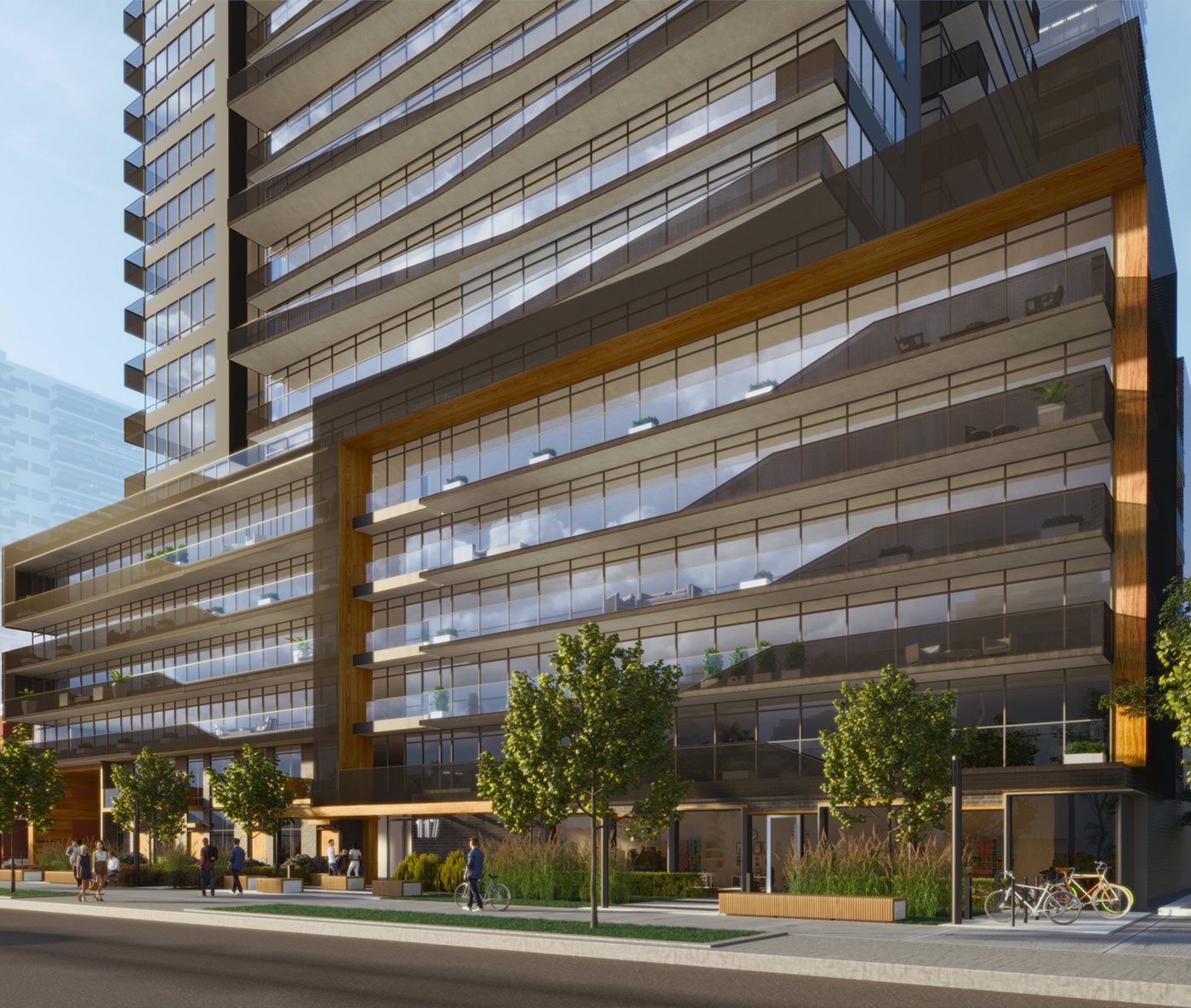 The building’s H-shape also carves out two distinct amenity spaces. First, it creates access to the the outdoors with a zen garden and play space. Secondly, it creates a dedicated pickup area, below, that is designated for rideshares. Downtown buildings, notes Kazerouni, are built on narrower lots, meaning that less space can be devoted to such amenities. “Here,” he adds, “you’ve got the opportunity to have your Uber and your Lyft arrive in a safe spot to pick you up without disrupting the flow of traffic or the flow of the street. It’s a dedicated, safe dropoff and pickup.” 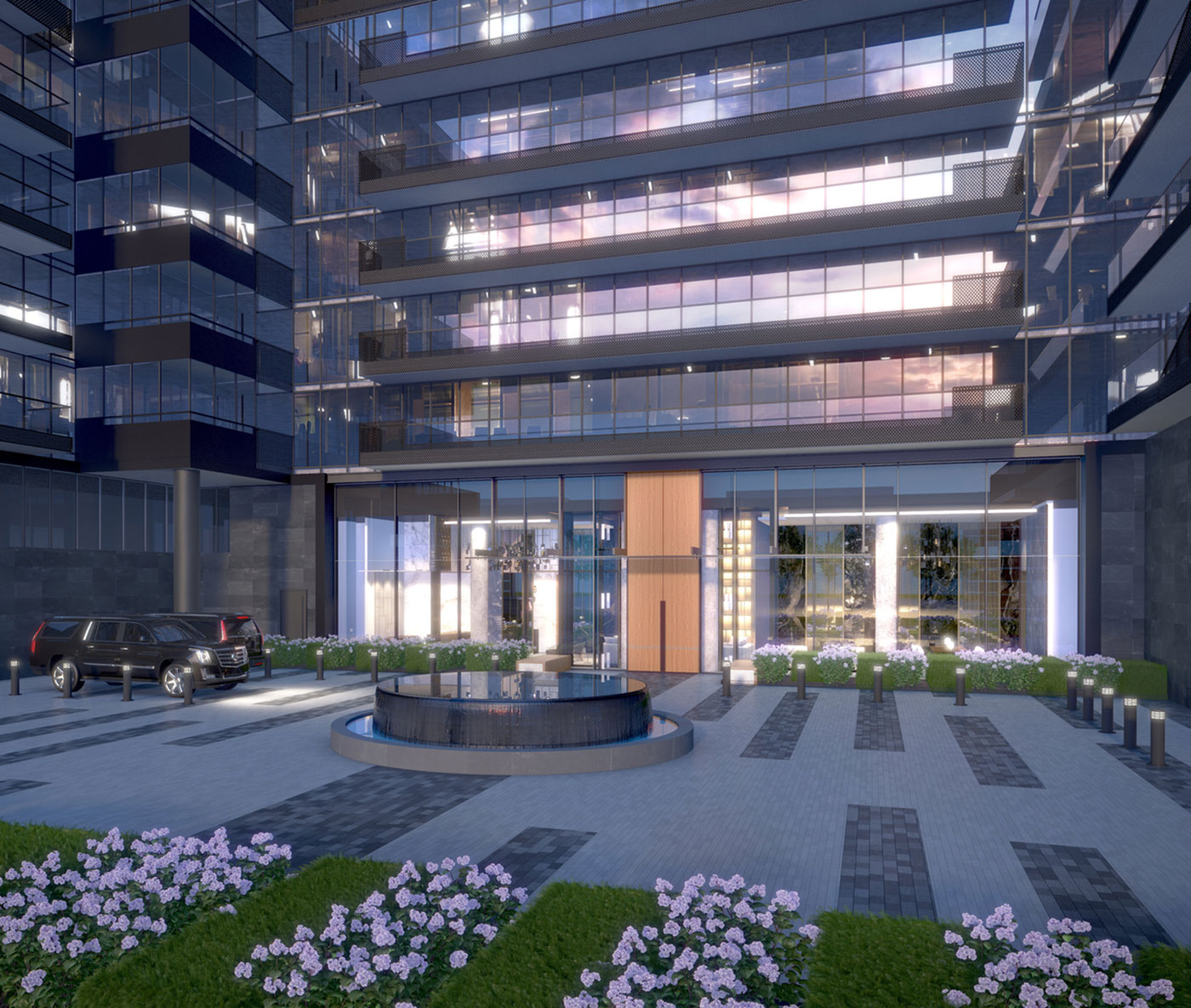 It’s a sustainability-minded idea that, along with the building’s 800 bicycle lockup spots, could encourage users to ditch their cars (or, perhaps, rent out their parking spaces). The focus on au courant amenities continues inside the project, too: lobby was designed as a hangout space, with plenty of room to linger and sip coffee. There’s an industrial-inspired coworking space, a boon for remote workers, that converts into an event space by night. Cold and hot storage is available for food boxes and UberEats deliveries. Couriers can also drop packages off in electronic lockers. Concierges of the world, rejoice.

There’s other amenities, too, from a pool to a 10,000 square-foot gym to a demonstration kitchen to a proposed tuck shop. It’s luxurious, to be certain, but Line 5’s utility-minded amenities are what truly define the project. 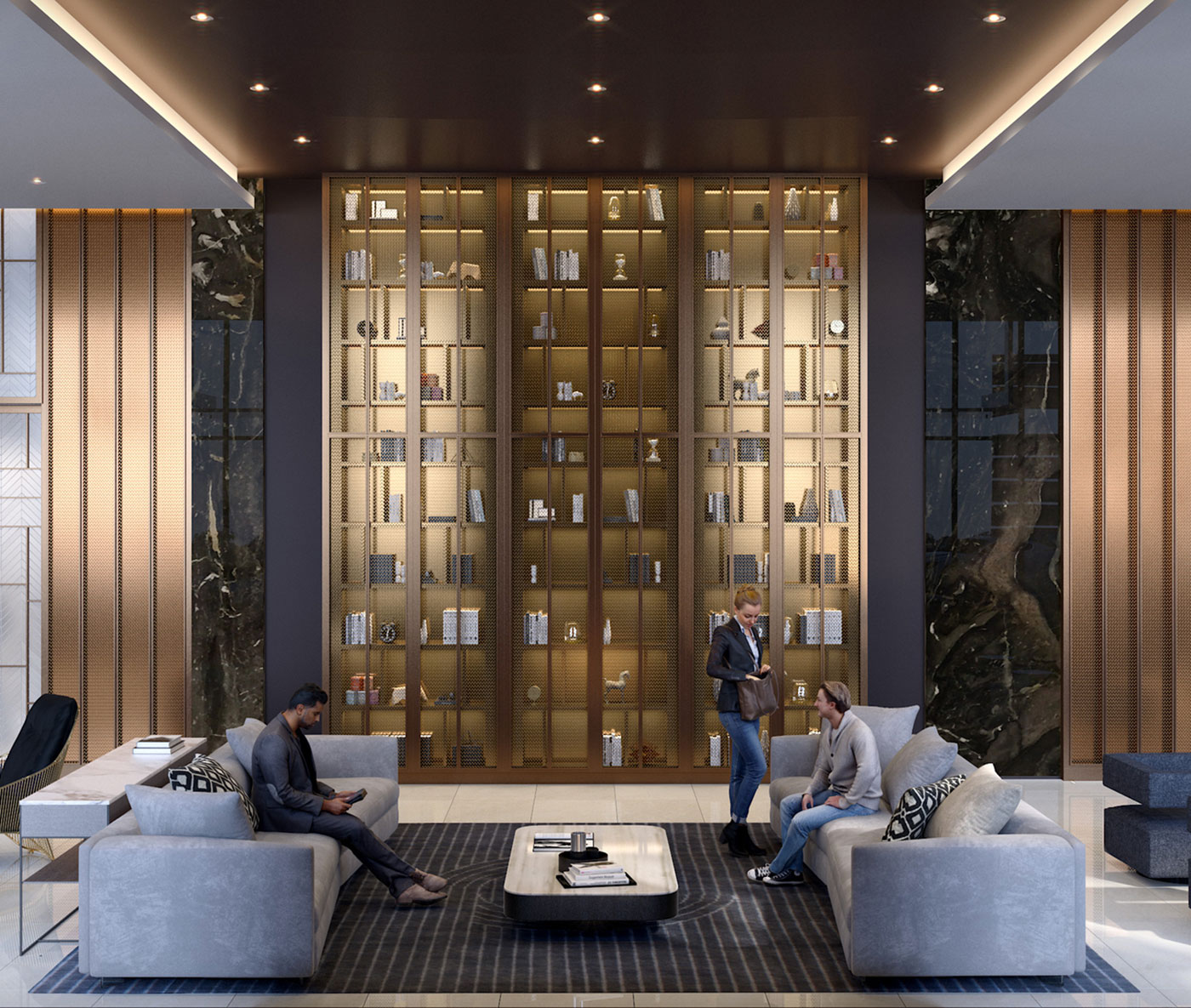 Kelly Cray, creative principal at U31, calls Line 5’s a “playground” for its inhabitants. While nearby condos drew heavy inspiration from art-friendly environments, Cray envisioned this project as bold, as “downtown-uptown.” Its lobby, complete with a communal table, is grand, with veined marble surfaces, metallic accents and grid-like patterns referencing nearby transit lines. Its coworking space-turned-social club, with a distinct industrial tone, draws influence from restaurant and coffee shop environments. Its suites, complete with sleek integrated appliances, mirror the luxe tone established throughout the building.

“It’s interesting,” says Cray, “because [residential] design is now driven by our experiences in restaurants and cafes. It’s really an extension of all those spaces. When you come home, you want to experience that [hospitality] aesthetic.” 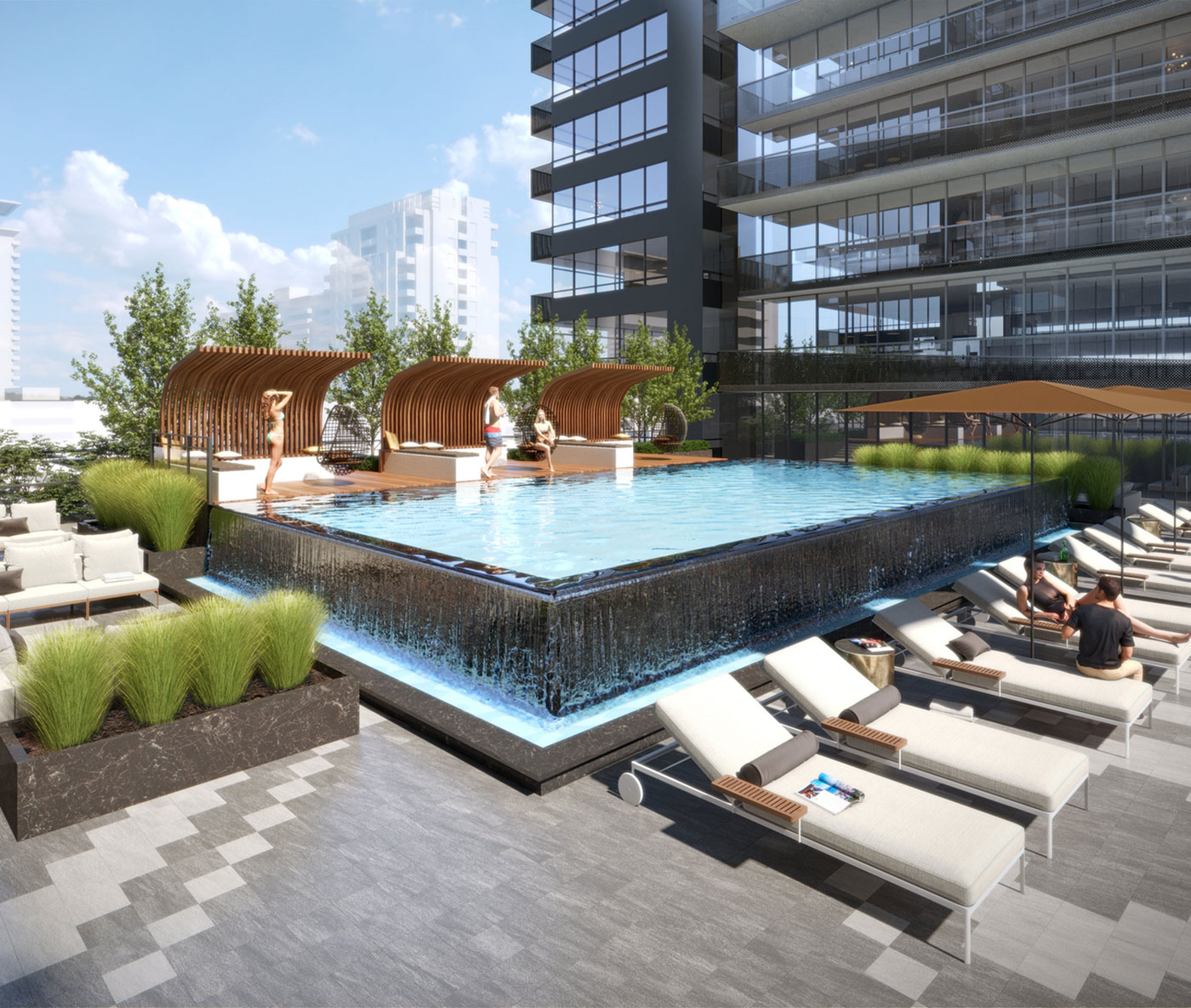 The entire package, say its designers, is a project that more closely mirrors the diverse lifestyles of its end users – whether they’re families, empty nesters, or the famed Young-and-Eligible type. “We’ve created an environment that is highly walkable, that’s transit-connected, that has a very generous amount of open space,” says Kazerouni. “You’ve got a beautiful setting, a residential context, and a wonderful mixed-use character to the neighbourhood, incredible transit connections. Really, that’s where it all starts.”