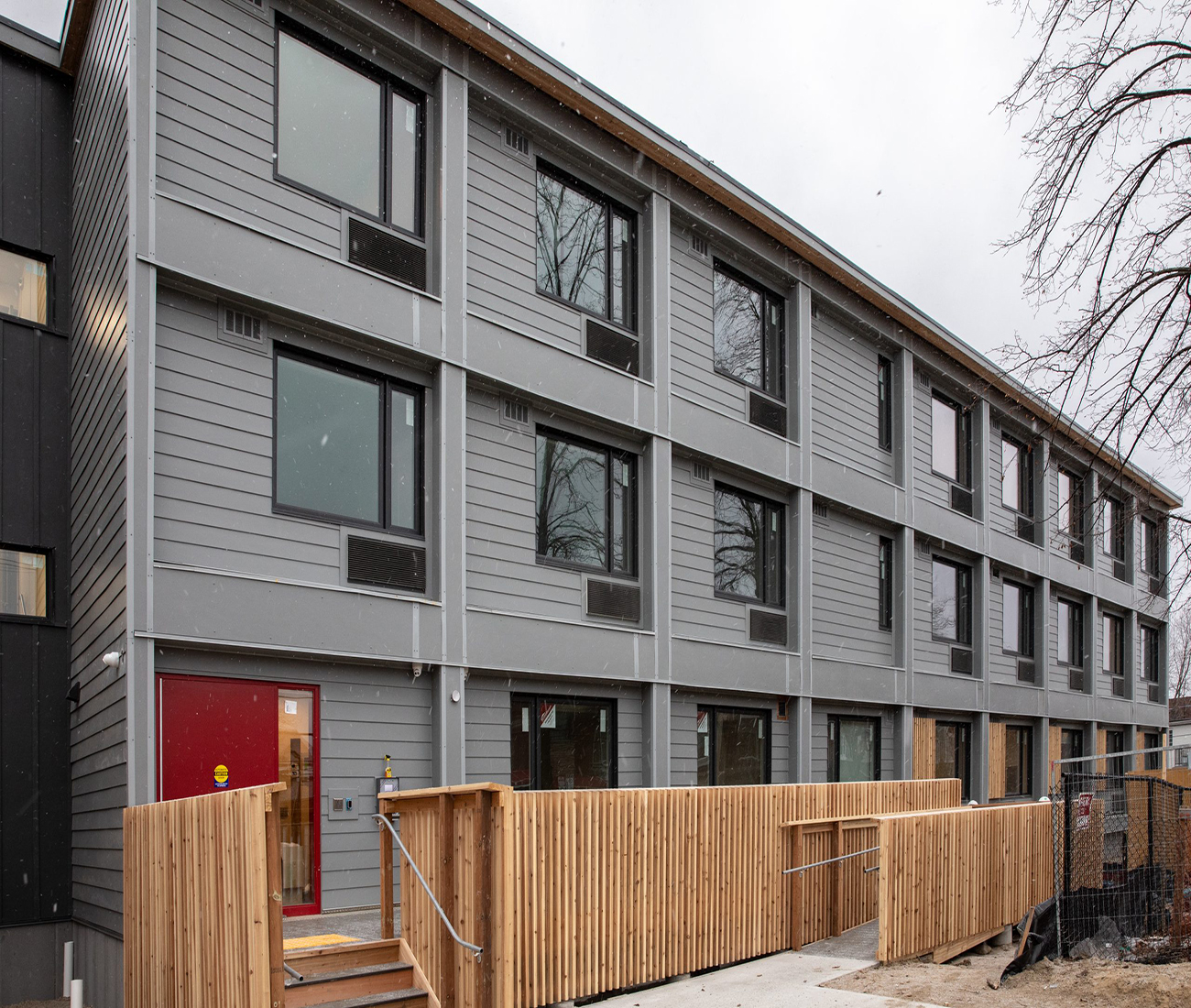 Over 100 modular units have been completed in the past several months, with more on the way

Last Spring, the City of Toronto announced a plan to build over 200 new supportive modular housing apartments in just a matter of months. “We know helping people with supportive housing is good for everyone and modular housing is a way to make that happen faster,” said Mayor John Tory in an April 29 announcement. “The pandemic has heightened the need for supportive housing.” And just before the end of the year, the first residents moved into the rapidly constructed Scarborough complex at 11 Macey Avenue.

In the first weeks of 2021, the 56 bachelor suites on Macey Avenue were joined by another modular building featuring 44 compact apartments at 321 Dovercourt Road in downtown Toronto. And this week, the City announced that the 100 recently completed homes will be joined by similarly scaled new buildings in Willowdale and Cedarvale, which are expected to introduce an additional 64 homes each by the end of the year.

Measuring approximately 28 square metres each, the homes all come fully furnished, and are equipped with a compact modern kitchenette and full, accessible private bathroom. In addition, the four planned and completed buildings — which are all designed with a similar 5,200-square-metre footprint and three-storey scale — include a larger communal kitchen and dining room, as well as administrative offices and program spaces for residents.

The four projects announced so far under Toronto’s Modular Housing Initiative (MHI) leverage modern pre-fabrication techniques to construct functional new homes on a dramatically accelerated timeline. Assembled from a factory-made kit of parts delivered to site and stacked into place, the buildings can be completed in months — even weeks — instead of years. Built on vacant or underused City-owned property in established neighbourhoods, they have the potential to transform parking lots and fenced-off land into full-fledged communities.

Local architects Montgomery Sisam developed the modular design template, which imbues highly streamlined, efficient fabrication with a sense of grace, dignity and comfort. While the apartments all welcome ample natural light through their generous central windows, the buildings themselves quietly convey a sense of welcome. Framed by exterior accents in warm wood tones, the simple buildings are eventually set to be complemented by landscaping and ample outdoor seating, making for a sociable ambiance.

According to the designers, the initiative’s “architectural significance is found in a design that not only recasts our experience of modular buildings but of those who will inhabit them here.” And while “modular buildings are often perceived as cold and industrial, foreign to their surroundings,” Montgomery Sisam’s pared down yet thoughtful design feels of a piece with the fabric of Toronto’s residential neighbourhoods.

For all the innovation in modular design, MHI’s early success still owes more to political action than pre-fabrication. But in speed and scale, the City’s embrace of supportive housing is a modest but meaningful step in fulfilling long-standing promises to address chronic homelessness (even if, at times, it is intent on taking a step back, as well). What’s more, it’s cheaper than maintaining shelters. The COVID-19 pandemic has inflated the monthly expense for maintaining a single shelter bed to $6,600. By contrast, a supportive housing unit only runs the City some $2,000 per month.

From concept to creation, Toronto’s recent embrace of supportive housing represents a promising departure from the inert — and seemingly indifferent — bureaucratic machinery that churned out decades of delays and broken promises.

Adapted from a feature originally published by Azure.