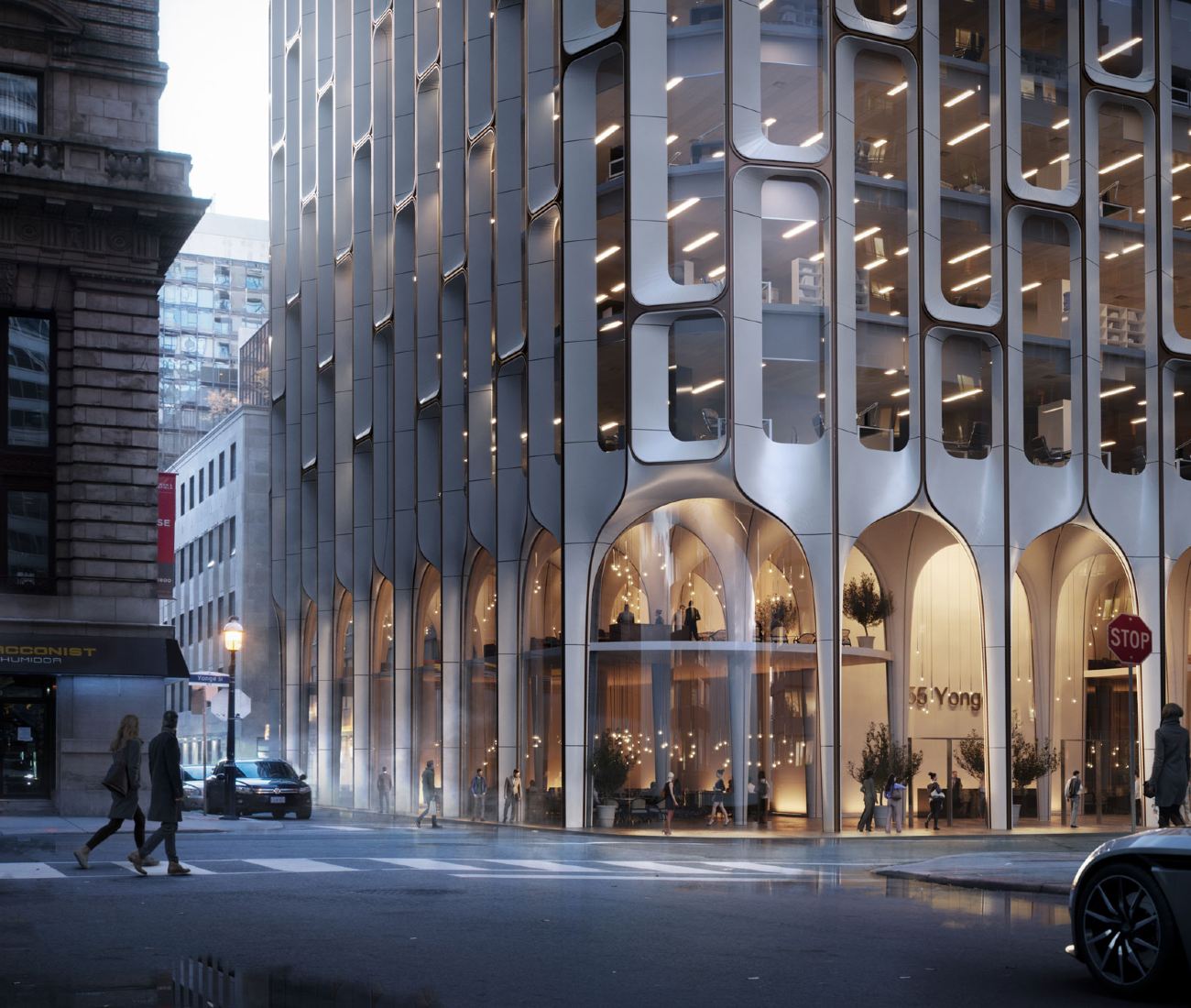 Toronto has a well-deserved reputation for blue glass and grey steel. During the ongoing building boom of the 2010s, an unprecedented number of high rises went up, too many of which featured – how to put this delicately? – very safe design. But pending a handful of approvals, that’s changing, and perhaps nowhere moreso than down Yonge Street, where internationally renowned studios are proposing city-defining developments. But, of course, approvals are no small thing, and they occasionally stifle or outright stop ambitious architecture from ever getting built. Below, we look at three projects, all with the potential to change the city for the better.

Announced this year, Partisans‘ and BDP Quadrangle’s 55 Yonge, as submitted, will see 66 storeys with 500 residences and 10 floors’ worth of office space go up just south of Yonge street and King Street East. While it abides the podium-and-tower convention, the facade, inspired by lace, unifies both into a single, sinuous expression. Beyond its distinct appearance, it’s also designed to modulate solar gain, while the stepped crown was shaped to minimize shadows cast on – specifically – the nearby Cathedral Church of St. James. At ground level, the tower-tall expression manifests as a series of two-storey pointed arches. The application is currently under review.

Dialog, which collaborated with Bjarke Ingels Group on the AZ Award-winning Vancouver House, last year proposed a similarly stunning piece of architecture for our fair city. Situated on the southwest corner of Yonge and Gerrard, the design for the 74-storey structure is defined by external columns that frame glass curtain walls, which at street level, curve outward from the base. There’s also a pair of two-storey, open-air breaks and not a single parking spot for cars – instead, there’s more than 400 spaces for bikes. Lengthy setbacks are done away with as well, with the smallest extending just nine metres. Unfortunately, as progressive as these design decisions are, many of them breach Toronto’s official planning guidelines and, unsurprisingly, the City is set to oppose it in its current form. Hopefully, though, it doesn’t change too much.

Further up Yonge – and much further along the development pipeline, as in this one’s green lit – is Studio Gang’s One Delisle. The 16-sided, 47-storey Deer Park residential building is the Chicago-based studio’s first Canadian project and, like its most famous project, Aqua Tower, One Delisle’s scalloped facade will be a standout in the city. Closer to the ground, the tower emerges from an art deco facade preserved from the previous building, maintaining a sense of continuity in the neighbourhood while contributing to the tower’s unique aesthetic.